What does the future look like? According to New York-based Square One Collective, a lot worse. Written and directed by Andrea Ang, No Place (almost reminds us of the a phrase no place like home’) imagines the world in 2075, on the brink of being physically impossible to live in. Three people – a political exile, a former radical and a climate refugee (Sarah Sarah McEneaney, Natalie Ahn and Juliana Suaide) play a game, with the hopes of winning and being rewarded with access to a utopia – the Promised Land.

For these three women who want to improve their lives by heading to the Promised Land, winning could change everything. The game itself resembles a mix of Twister, Connect Four and tic-tac-toe, encountering themes of citizenship, nationhood and personhood and the ever pertinent issue of migration. As they stand there, we hear a ‘national anthem’ without any words, just the melody. The three women (known only as players A, B and C) mouth the lyrics without singing. We are reminded of how even in our own society, whenever the national anthem is played, we look around and see people either fully committed to singing it, or half-heartedly mouthing it, wondering if they are ‘true’ citizens, so important as a signifier of national pride and allegiance. 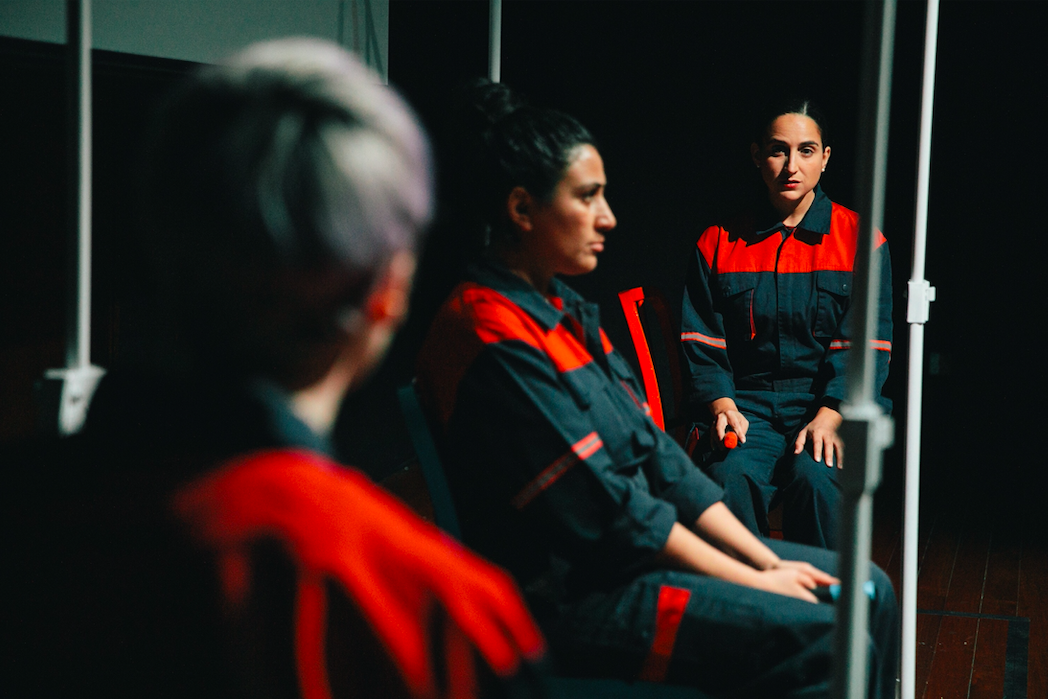 The test to determine who is to enter the Promised Land comprises a series of activities that are to be completed, delving into questions about life, existence, nationhood and identity. At the end of every round, the players are given ‘decompression time’, to relax and dance about just to get their minds out of the game for a moment before diving back in to the next round. The games are also constantly monitored by a ‘facilitator’, a fourth figure with a black mask completely obscuring her identity. We think of how we live in a society that is under scrutiny, where someone is always out there watching over us, making sure we keep to the rules and stay in line with what is expected of us.

As each round progresses, the games become more skewed as well, where hidden terms and conditions and twists are introduced to make each iteration a little more unexpected in an attempt to break the monotony. There is plenty of psychological warfare that comes into play, and regardless of the perpetrator or victim, have consequences to deal with. One thinks of all these as the unexpected obstacles life itself throws at us, and us having to adapt to it. 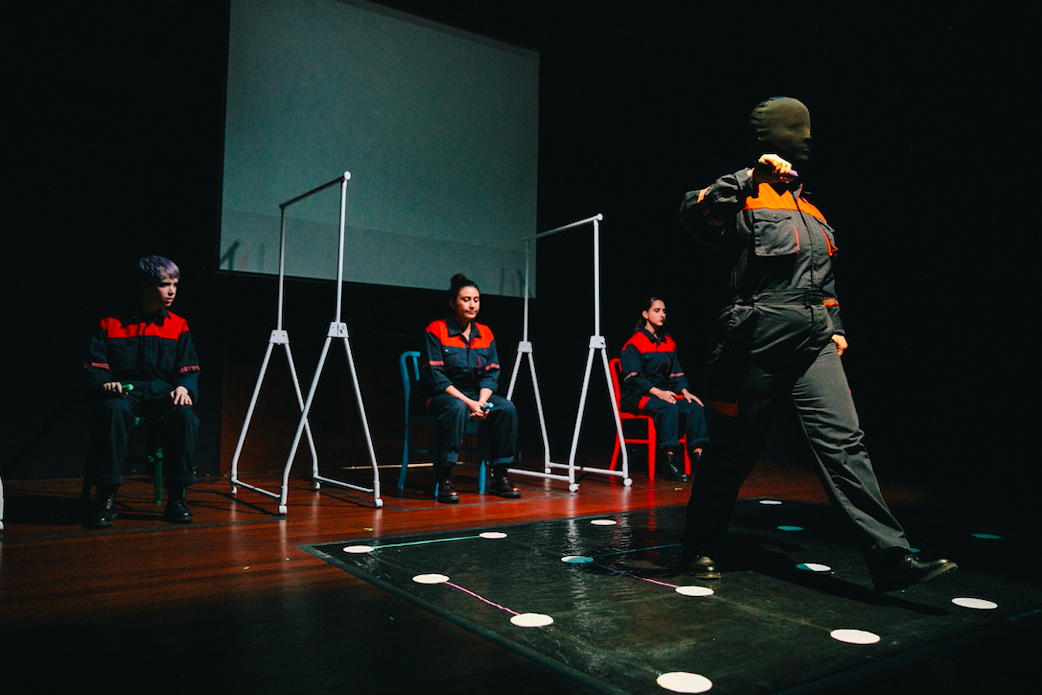 Much like how one better understands game mechanics after playing it for a longer time, as more rounds are played, the audience begins to better understand and get the hang of No Place’s ‘games’. Similarly, the players also improve with each iteration. One thinks of it as a metaphor for life, where we constantly face ‘game’ after ‘game’ in our daily lives, often wearing us down once we’ve been challenged one too many times. As much as it makes for a good parallel to that, from a theatrical standpoint, we personally felt that they repeated the game too many times, having already made its point early on and serving to overstretch the simple premise.

What is perhaps interesting is how during certain parts of the show, the actors’ facial expressions are clearly in contrast to the actions they are performing, such as being visibly strained while dancing during decompression time. There is the sense that there are a lot of hidden truths the performers are concealing beneath the surface, and how even life itself has plenty of ‘glitches’ that could mess up one’s plans. 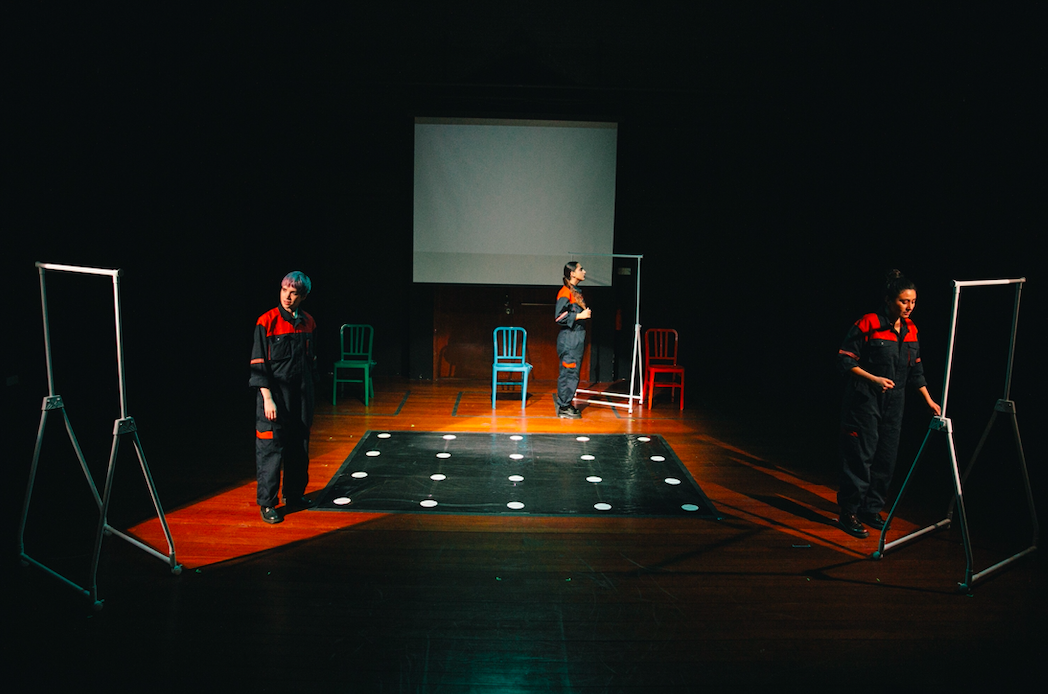 The actors then, effectively bring out the challenges and hard truths of living life, and the difficulty in making life-altering decisions, playing their roles with full commitment and sincerity. We all hope to go towards the ‘Promised Land’, but only so many of us get the opportunity to. One player is eventually declared the winner, and prepares to receive her prize. Before she proceeds, she builds herself a house of cards, as if a symbol of the fragile dream that she has built up for herself, vulnerable to change and complete collapse at any time.

The door finally opens, and she walks towards the ‘Promised Land’. But as she leaves, we hear a rooster crowing, as if this is the beginning of a new day. We realise then that this is not a one-off game they play for a shot at eternal paradise, but simply the chance to live another day. No Place then illustrates the vicious cycle of life, and how we must continue to fight for survival each day, before ‘playing’ again the and again, right up till the bitter end.