Dementia is one of the most terrifying conditions to possibly strike a human being. At the heart of Story Works X Dreamland’s The Long Goodbye is an accomplished author who has been struck by the ailment. All he remembers now are the events of a bestseller he wrote about being a father to his youngest son.

But years have gone by, and that son has now grown up and tries desperately to make a name for himself, outside of his father’s shadow, outside of being ‘the boy in the book’. Forced to care for his father as his condition worsens, the son must now reconnect with both his father and the book he now shuns, in the hopes of regaining the capacity to love and dream.

Adapted from the heartwarming essay collection My Little Boys by Taiwanese writer Luo Yijun, The Long Goodbye follows up from Story Works’ acclaimed run of The Way Of Zhuang Zi at Huayi 2019, with this moving theatre production touching hearts in Taiwan since 2018. We spoke to director Huang Chih Kai to find out a little more about what to expect from this production: 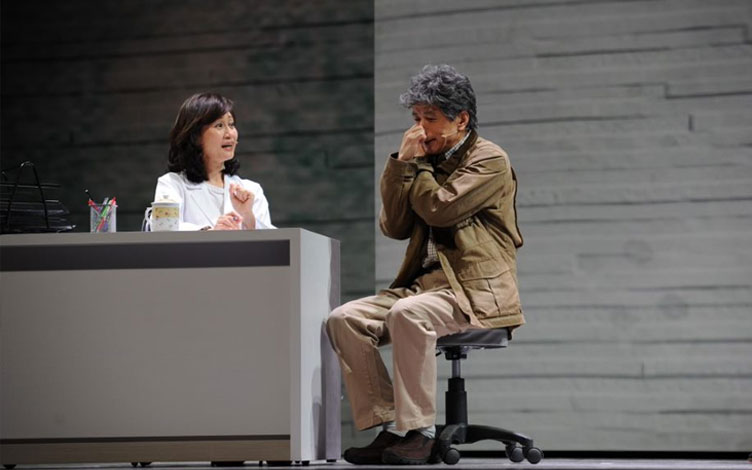 Bakchormeeboy: Why did the company decide to adapt The Long Goodbye from a book into a play?

Chih Kai: At that time, Su Li-Mei, the head of Dreamland, proposed that we collaborate on adapting “My Little Boys”, with Dreamland doing animation and Storyworks working on the story. At first, I refused, as the book itself was about Luo Yijun and his ten-year-old son, interesting and full of life philosophies, but ultimately lacking drama and an overarching narrative about the relationship between characters.

But later, Su asked me “Wasn’t your son just born? Maybe you can think about this from a father’s point of view instead.” That question made me think again, and going back to the book, I read the preface. It told of how when a child stops salivating, it represents him having grown up, and on that day the author’s son stopped salivating at 4 months old, the elders in the family came to give him blessings. When it was finally his turn, he didn’t know what to say, because he was very shy and didn’t speak much. Everyone said: “You just say it! Just say a blessing to your son.” He thought about it and finally said: “Bring happiness to the world.” This sentence moved me very much. It was a father’s most sincere and sincere hope and blessing to the child, and that convinced me to adapt this into a play with Dreamland. 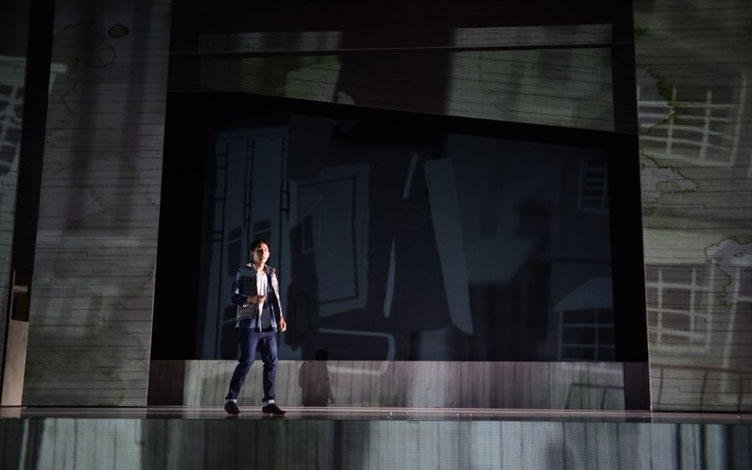 Bakchormeeboy: Tell us about the collaboration with Dreamland – what was the working and development process like?

Chih Kai: Story Works focused on the theatrical elements, which was completely different from the animation that Dreamland did (which was very true to the original). The animation was great, and won Best Animation Program at the 2019 Golden Bell Awards. In contrast, my theatrical adaptation saw the younger son grow into his thirties, and reflect on his childhood with his father instead. The play then focused on playing with concepts of time, space and memories, and combined the ones from both the son’s childhood and his father’s. The interesting part is when past blends with the present, and we see conflict between the son and his father, as opposed to their innocent relationship when they were younger. Don’t we all relate to this on some level? 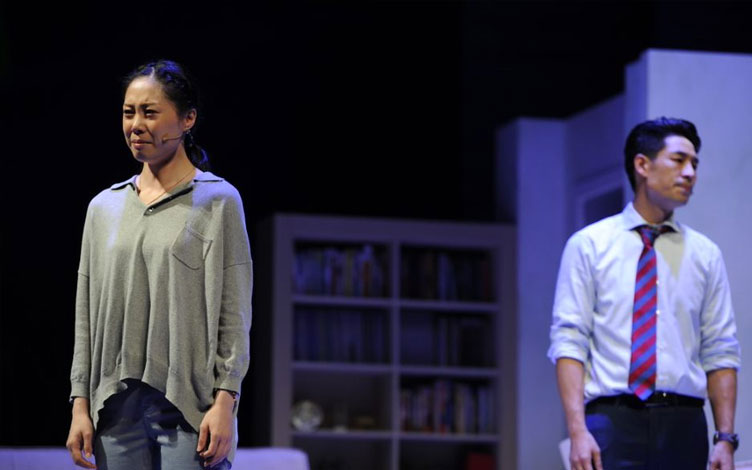 Bakchormeeboy: Are there any innovative theatrical techniques or technology utilised for The Long Goodbye that enhance its visuals or emotional impact?

Chih Kai: In general, the hardest thing for stage plays is scene changes, and it’s difficult for the theatre to replicate a montage in a movie, which has to be fast. The transitions onstage are very fast, and we used several hanging screens that can move together, so the flow is very smooth. Sitting in the theatre will feel like watching a movie, with how fast the scenes transition, such as when we go back in time to see the son in his younger days.

There’s also a scene where Dad loses his way on a rainy day, but couldn’t find the way home because of his dementia, so the son went out to find him. Finally in the heavy rain, the son found his father, but the father did not recognize him. They have a conversation in which the son asked his father, “What are you doing here?” Dad says he was looking for his son, but his son was actually in front of him, and couldn’t recognize the grown-up son in front of him. Later, as the two of them sit in a park where they used to go to, the bench they’re on slowly separates, as if extending into an infinite gap. This represent show the space in their hearts is becoming more and more unfamiliar with each other, and to create a sense of magical realism. 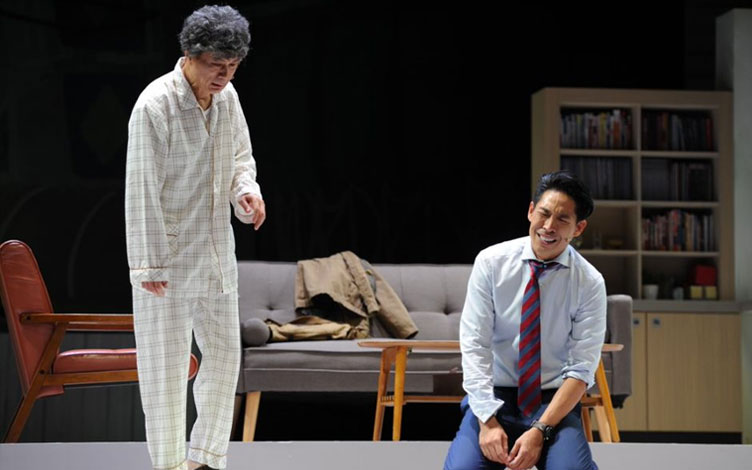 Bakchormeeboy: Story Works presented The Way of Zhuang Zi at Huayi 2019; as a follow-up work to that (at least in Singapore), how does The Long Goodbye encapsulate the ethos of Story Works and the kind of theatre the company creates?

Chih Kai: In The Way of Zhuang Zi, very few people created a performance centred around the idea of an escape room. When it came to Singapore, we received a lot of praise for how shocking and powerful it was, despite our fears of there being a language barrier with the complexity of the language and unfamiliarity with the culture. We were very touched by this. 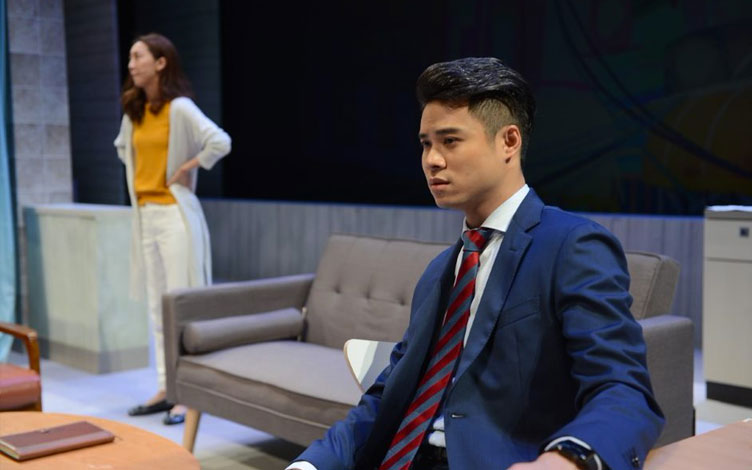 Bakchormeeboy: Mental illness can be one of the hardest things to deal with or even understand on account of its invisibility. Does The Long Goodbye seek to present any solutions as to how one can or should cope with such issues in our own lives? Or does it simply seek to re-present that onstage for the sake of catharsis?

Chih Kai: The Long Goodbye is mainly about dementia, so I did a lot of research on the topic. The most important step was to understand those closest to me that were suffering from it, namely, my grandma and grandmother. I remember when I was a kid, my grandma asked us to buy noodles. I bought it, she ate it, but not long after, she suddenly said she wanted to eat noodles again. She had forgotten that she had just eaten, and that marked my first experience seeing dementia happen before me. In my time, there wasn’t a word for this, and it was treated as if the elderly were regressing into childhood and being unreasonable. I also read up about dementia from the perspective of a doctor or a nurse,suggesting how to take care of patients with dementia.

I ended up reading about this Japanese dementia patient who wrote about his experience with panic. He wrote about how he forgot to bring his bag, the keys, and finally, forgot his way home. I wonder if by the end, he also forgot how to take notes. In my show, I want to make the audience aware of dementia from all aspects, from the people and caregivers of the dementia patient, as well as from the medical perspective.

There is a very interesting line in the play: “Patients with dementia seem to be living in a different time from normal people.” What that means to say is that although they exist in the same physical space as us, we see the present but those with dementia see the past. The protagonist in the play wants to understand how to change his relationship with his father, so he asks: “How are we going to change his lag time?” The doctor replied: “It is not the lag time of the patient that we want to adjust, but our own.

And to do that, it’s like how our parents would accompany us, talk with us, and play games with us when we were young. We have to be patient with the elderly, just like how they were patient with us when we were young. When viewers hear it explained as such, they’ll understand what we mean, and that what patients need the most is patience and companionship.

Bakchormeeboy: How do you hope that audiences react to The Long Goodbye and what they’ll leave the theatre with?

Chih Kai: After watching the performance of  The Long Goodbye, you may not be able to change your situation. But I hope that after watching the show, the audience can learn one thing, and that is to stop being afraid to see your parents grow old. I want them to be able to recover the innocence and courage lost in childhood, and bravely face every difficulty in life. You are not alone, you will embrace such a journey because you are born, and one day, we too will be like the father, where we will grow old, and reach the end of our life. But when that moment comes, we must be willing to face it, and feel calm in our hearts.

Chih Kai: Story Works continues to create productions of different styles, themes, and types. Of course, I also hope to bring our works from Taiwan to other parts of the world, and showcase them to more and more audiences, so that they may also be moved by our works.

The Long Goodbye plays from 7th to 9th February 2020 at the Esplanade Theatre as part of Huayi Festival 2020. Tickets available here