Nerve wracking thriller of a play that keeps you guessing every step of the way.

Happiness is the absence of striving for happiness. I do not know whether I was then a man dreaming I was a butterfly, or whether I am now a butterfly dreaming I am a man. Of the many Chinese philosophers we grew up learning from our scholar of a Chinese teacher in school, Zhuang Zi was by far one of the most complicated and nigh impossible to understand ones, with sayings and stories that bordered on far too deep for the teenage mind to comprehend.

Yet after watching Story Works’ scintillating The Way of Zhuang Zi, one feels one has learnt more about the eponymous man’s philosophies in 2 hours than the years spent in school. Although the premise is a familiar one, The Way of Zhuang Zi feels strikingly original with its unorthodox riddles, the brilliant performances from the cast, and its stellar pacing with the way its mysteries unfold, teasing and cajoling its audiences from start to end. 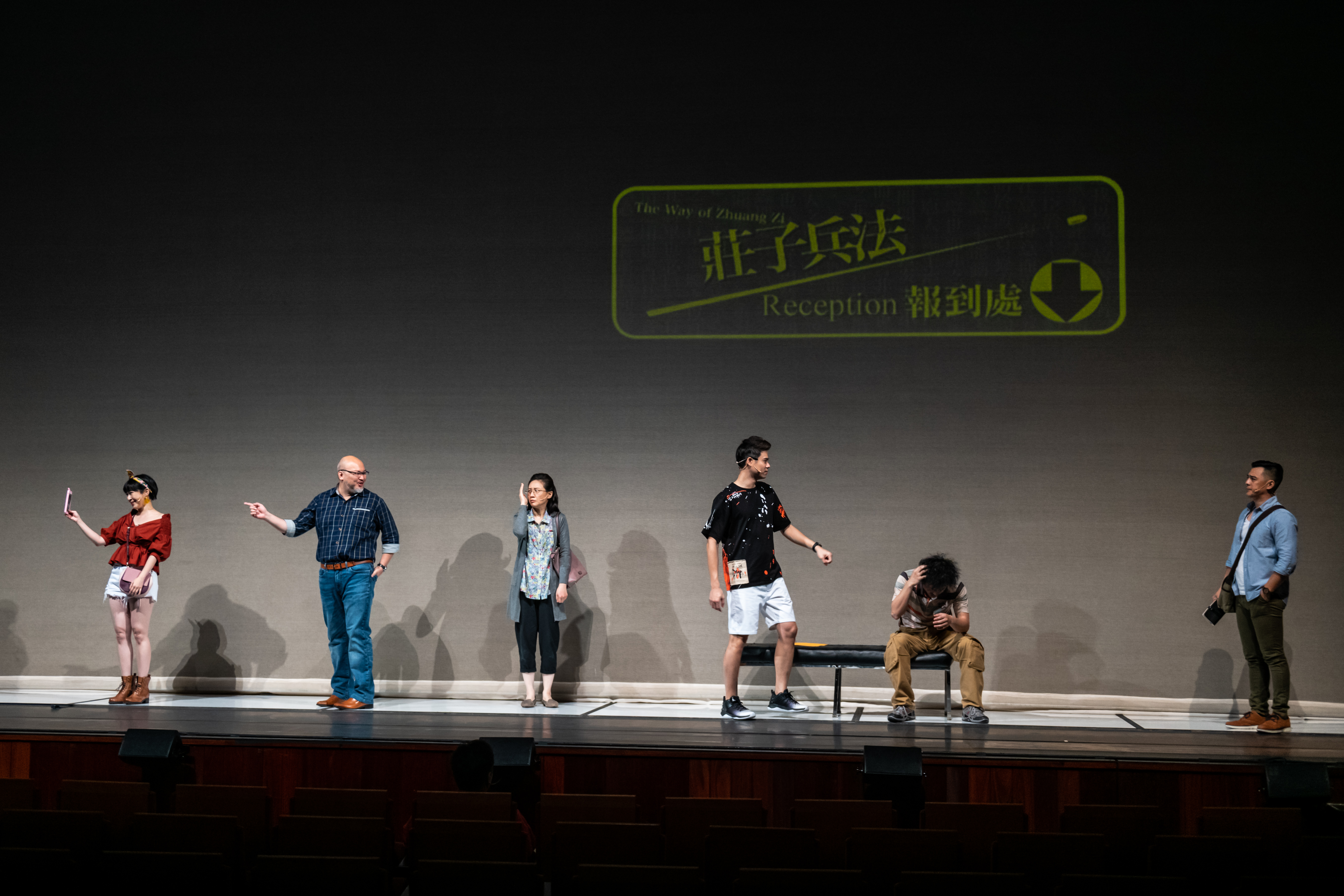 Written and directed by Huang Chih-kai, The Way of Zhuang Zi (庄子兵法 in Chinese, punning on Sun Zi’s Art of War) uses the eponymous philosopher’s writings and stories as the basis for riddles in a mysterious, dangerous escape room. Promising a lucrative reward of NTD$10 million for the winner, six strangers are lured into participating in this dangerous game and find themselves trapped. As the clock ticks on, secrets come to light, and tensions rise with increasingly dire consequences. 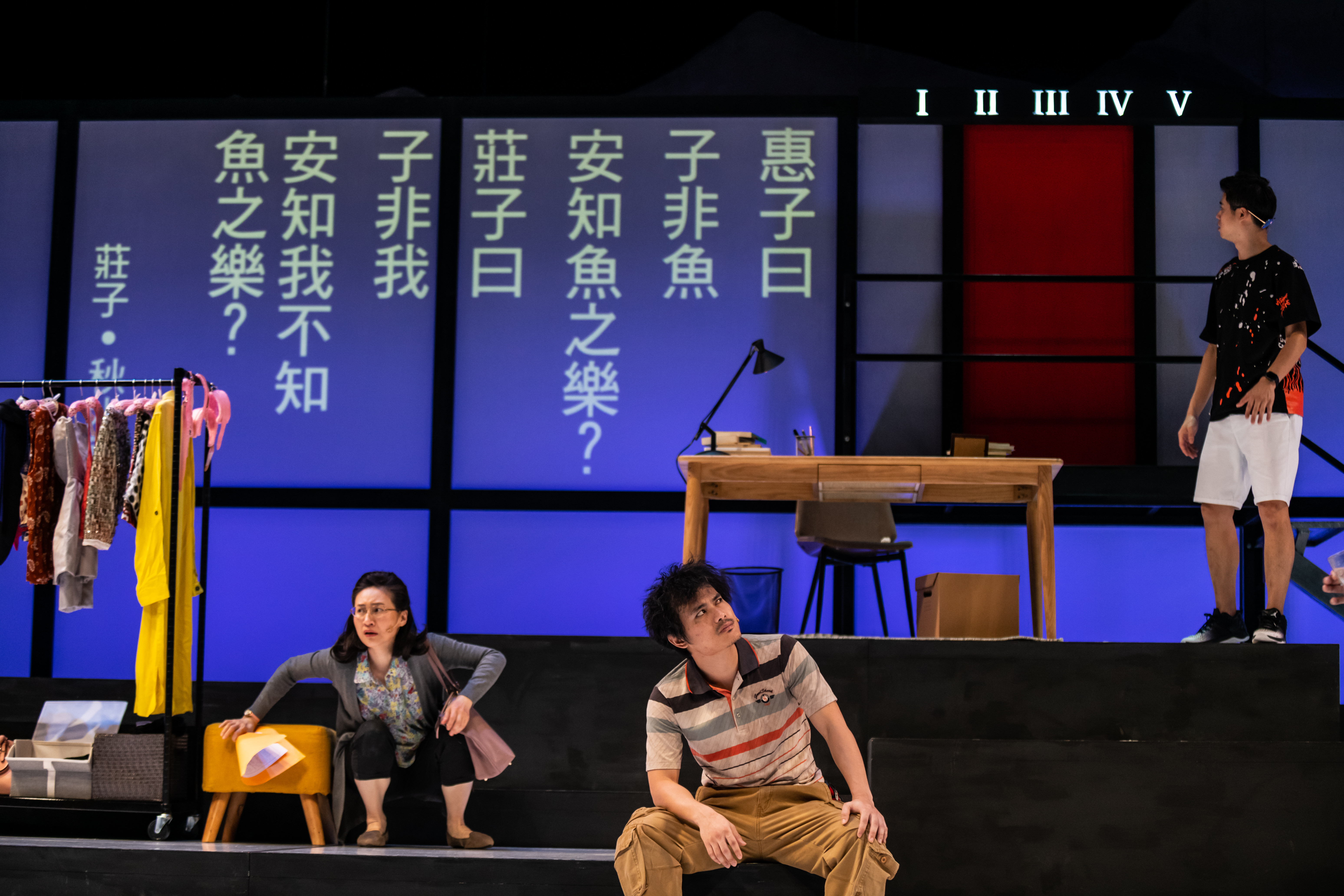 The cast of The Way of Zhuang Zi comprises of the six players, each one well-fleshed out and given equal time to shine onstage: Friday (Bobby Dou), our protagonist and tortured mystery novelist seeking inspiration, Teacher Jian (Liu Shan-Shan), a guarded teacher specialising in Zhuang Zi, Xiao Ai (Vega Tsai), a quintessentially ‘cutesy’ social media influencer, Zhuang Wen-sen (Liu Liang-Tso), a scheming, fat cat corporate executive, Alpha (Wu Ting-Chien), an obnoxious, ‘fuerdai’ thrill seeker, and Yu Chih-wei (Kuo Yao-Jen), an uncouth, violent blue collar glassworker. It is to the credit of writer Huang and the ensemble’s stellar performances that each of the characters are so well differentiated, their stories unfolding at a pace that compels audiences to follow them through, and each one dodgy enough that we can never trust what they say or assume how their arc will play out. 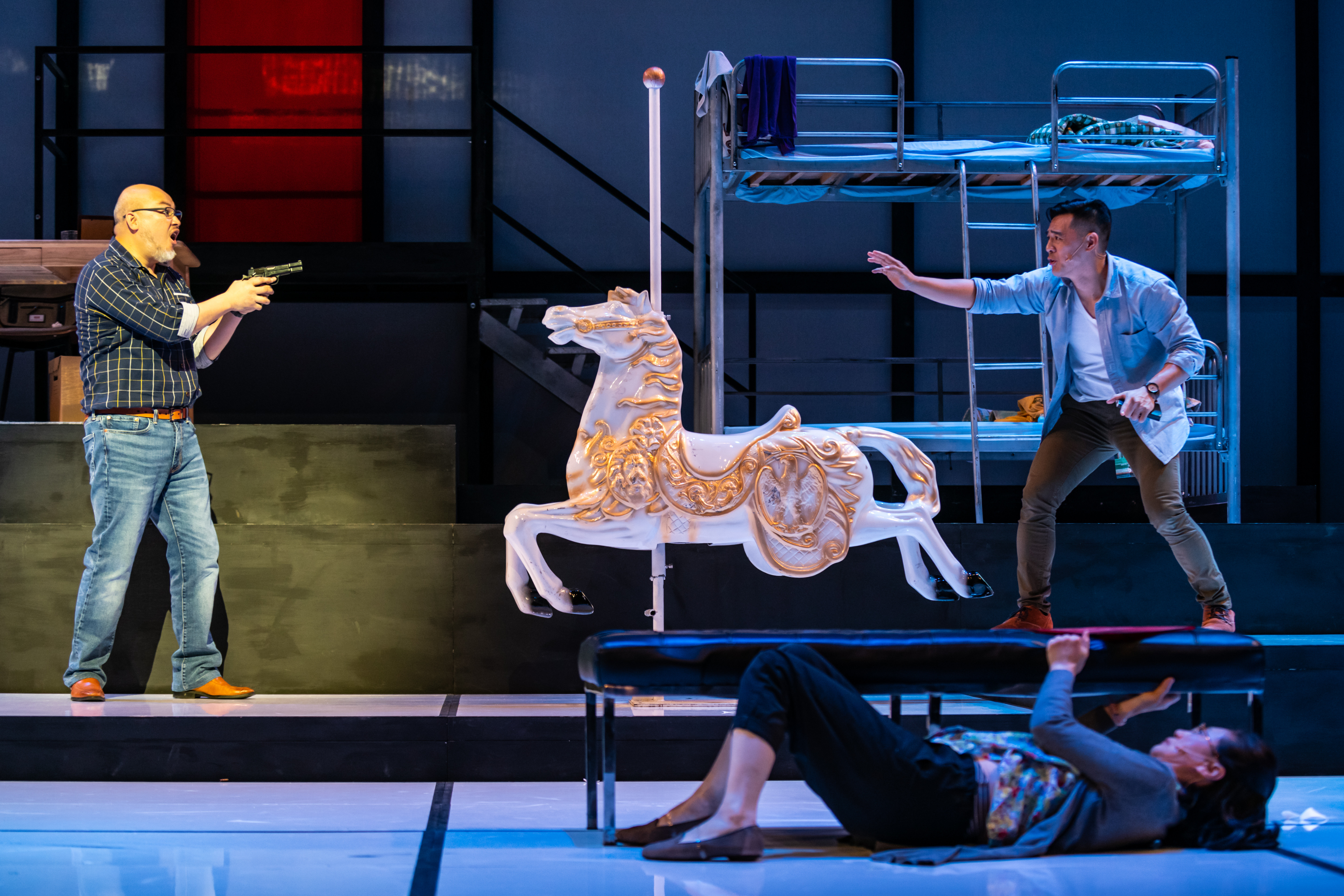 Impressive too is the set design by Peng Chien-Yu and lighting by Hsu Chia-Yin, oozing high production value with lighted panels that flash each time the participants get the answer right, distinctive tables and chairs taken from each participant’s personal lives that feel individual and uniquely theirs, the gigantic moon that hangs ominously over them, suggesting lunacy as the players spiral further into various stages of cabin fever, and the many surprises and special effects lying in wait for the audiences, always leaving room for a new thrill in every scene. Zhuang Zi’s sayings even take on a Matrix-like visual as they flash on the panels, feeling eerily cold thanks to visual and imagery design by Huang Jeh-Chun, Joe Fang, and Hitsu Pi, while composer Hsu Wen’s sound design keeps the atmosphere suspenseful before plunging into instrumental, emotionally lilting notes that tug on the heartstrings. 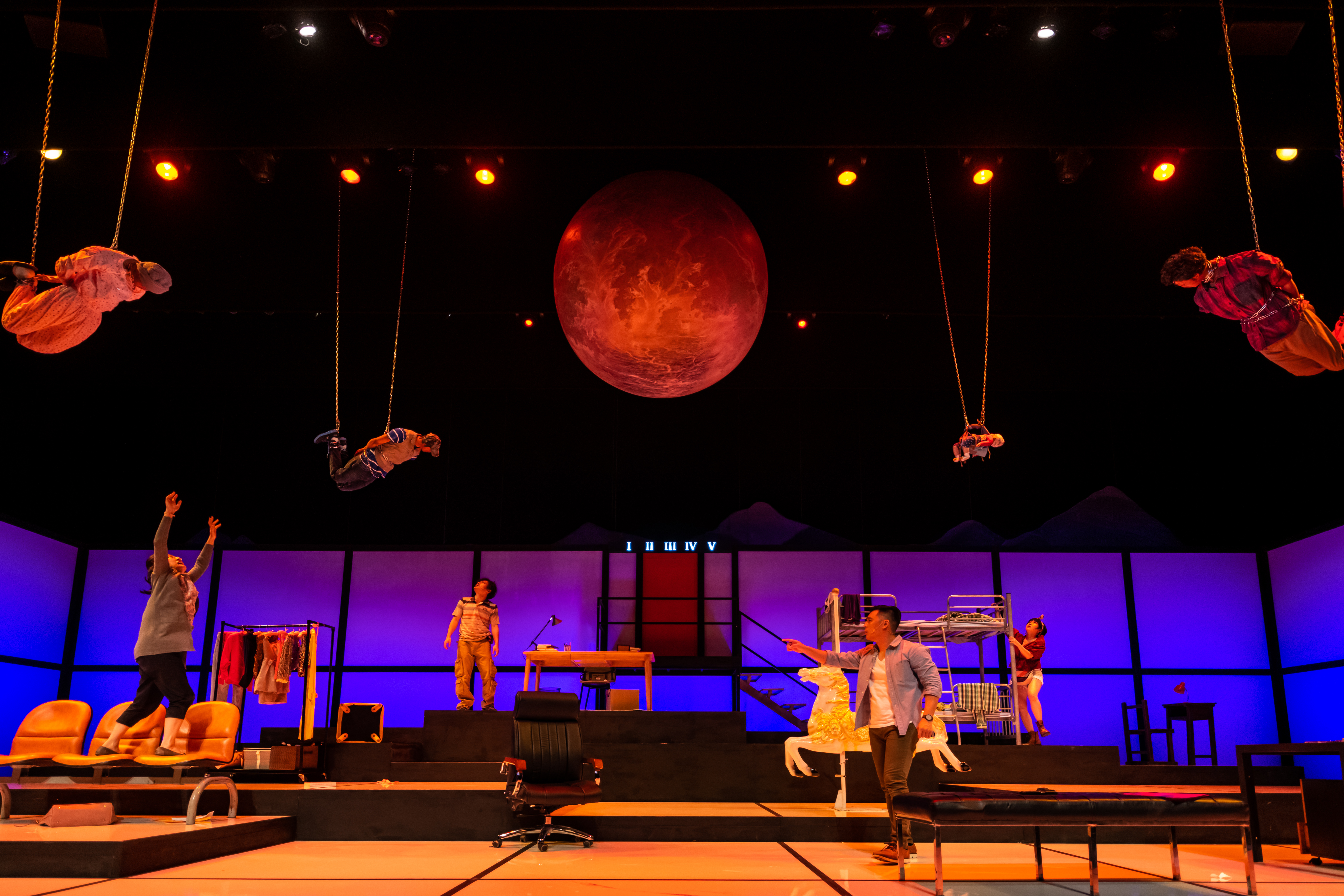 But what is so powerful about The Way of Zhuang Zi, beyond the innovative riddles that keep audiences guessing the solutions, the harrowing, melodramatic reveals from each character, the hilarious wordplay and jokes that let us laugh out loud even in the tensest of scenes, and of course, the Chekhov’s gun that is used to its full potential once revealed (absolutely not for the faint of heart), is the sheer depth of the message behind the facade of it merely being a game. The point of the show is never to figure out who it is that’s behind the escape room, nor is it the point of the show to cast blame upon any one of the characters for their actions. It is ultimately still the philosophies of Zhuang Zi that come through, teaching each character, in all their sorrow, a way of thought to numb the pain or learn to move on. Amidst all the tragedy ‘god’ might throw at you, it at times pays to take a step back from it all, see things from a different perspective, and realise that life itself it ridiculous, and it’s all we can do to live it as best as we can and learn to let go. 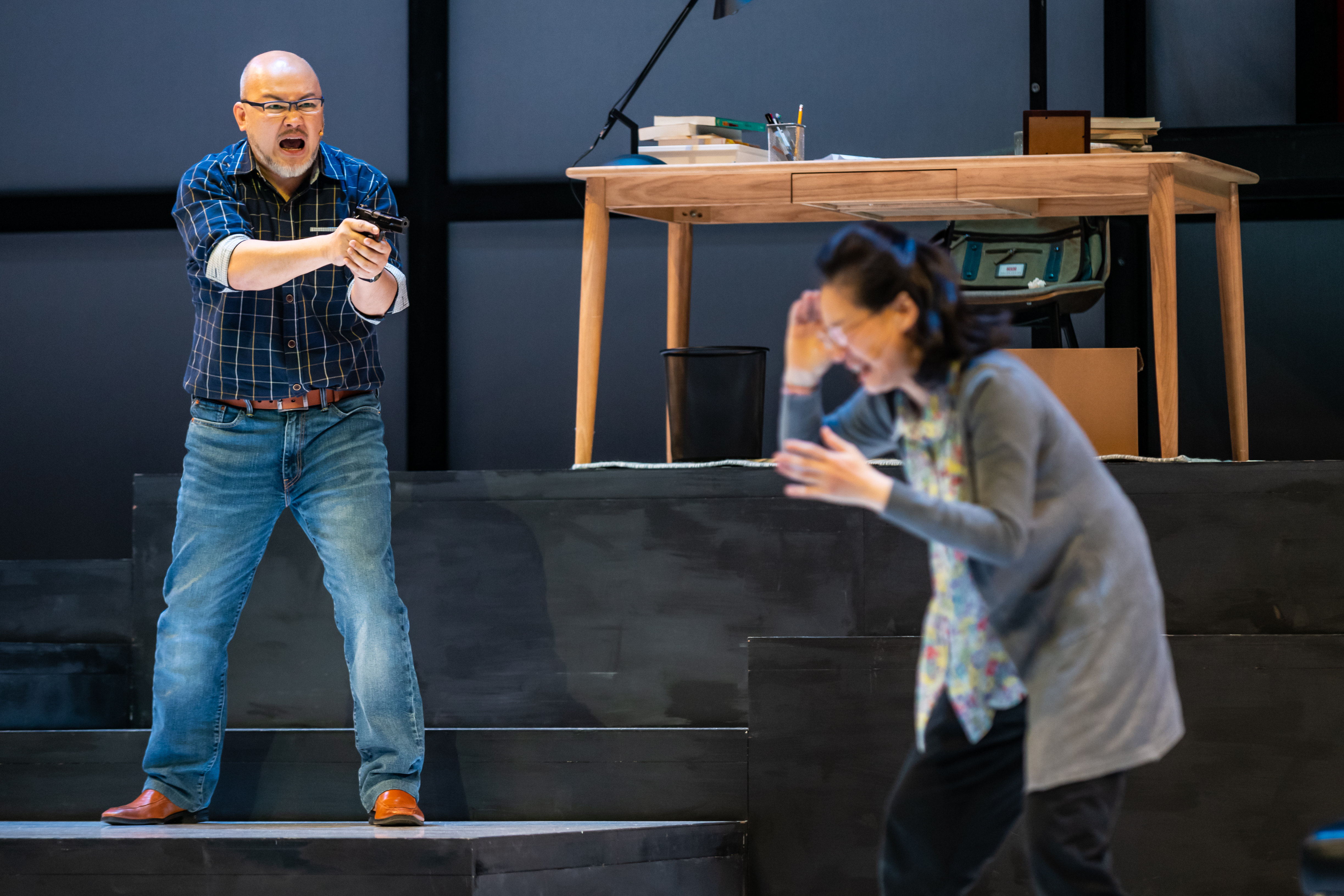 Suffice to say that The Way of Zhuang Zi is nothing short of a spectacular work of theatrical genius, fiercely entertaining to watch and a piece that leaves you reeling from the action and the hard truths it reveals. This is a production that constantly keeps you on the edge of your seat, and still leaves you numb with existentialist dread and trauma as it educates effectively by demystifying the esoteric sayings of an ancient Chinese philosopher, and essentially, great storytelling done right.

The Way of Zhuang Zi plays till 24th February 2019 at the Esplanade Theatre as part of the Esplanade’s Huayi – Chinese Festival of the Arts. Tickets available here