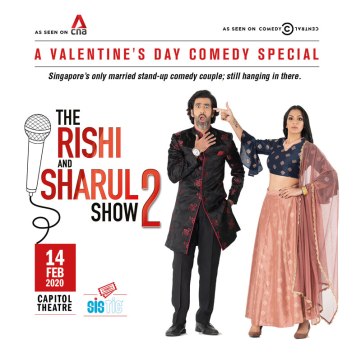 ★★★★☆ (Performance attended 14/2/20)
2 is better than one as comedy couple Rishi Budhrani and Sharul Channa join forces in a one-night only Valentine’s special.

“How do you keep the magic alive?” an audience member asks comedians and married couple Rishi Budhrani and Sharul Channa during The Rishi and Sharul Show 2. It’s not a surprising question, considering how for most of the show, the couple spends plenty of time throwing jibes at each other, speaking about the difficulties of living with each other they discover over the years. But the truth is, if one looks a little closer, it’s plain to see the subtleties in their performance and onstage chemistry that makes them seem like a perfect fit for each other.

Of course, that journey isn’t an easy one, as we see throughout the entirety of The Rishi and Sharul Show 2. Playing to a full house of audience members, the one-night only Valentine’s Day special was a rare chance to see both stand-up comedians perform onstage at the same time, with the topic of the night being, of course, love.

Opening with an introduction from both Sharul and Rishi, the show quickly establishes their relationship as one that encompasses plenty of teasing and jokes. At one point, they attempt to out-embarrass each other, with Rishi revealing an embarrassingly mushy love letter Sharul wrote to him when they first started dating (and contrasts it to a rude text message from her just sent in the morning), while Sharul digs up the first photo of them together. Love, for Rishi and Sharul, is a journey, one that goes from mushy to grounded, as the realities of marriage are laid bare over years spent together.

Segueing into individual sets from each of them, Sharul starts by delivering her signature loud, brash, and unabashedly confessional recounts laced with both sharp observation and gross out humour. Rishi then follows up by delivering a set that covers a range of topics, from NEA reports to being involved in an anti-drug campaign, framing them as quick-fire jokes. The laughs come easy, and no issue or person is spared from the jokes, which deal with everything from racial stereotypes to religion, self-deprecation to of course, the coronavirus.

But because of how the show explicitly deals with the nature of their marriage, it is the jokes about the things they discover about each other from living together that stand out the most. With both of them physically present, each of their stories are elevated by us knowing that these two comedians onstage are talking about each other when they say ‘my husband’ or ‘my wife’. We see, in our mind’s eye, the two of them in bed talking about the possibility of threesomes (and who would be involved), their wedding together griping about the obligatory invited relatives they only half remember, and we sense their struggles, from temptations to cheat, to problems in the bedroom.

Over the course of The Rishi and Sharul Show 2, it is as if we ourselves have gone through some of the toughest parts of the duo’s marriage, laughing hard at the wisecracks but also feeling the weight of time. We feel how much effort must have gone into dedicating themselves to living with each other as each year goes by, through compromise and acceptance, rude text messages and teasing, and a willingness to love and re-love despite everything they’ve been through.

The Rishi and Sharul Show 2 shines most when Sharul and Rishi get a chance to perform together. These are two people who have rehearsed enough and understand each other’s styles, riffing off of each other easily and supporting each other as possible. A perfect example of this is how when Sharul’s mic falters, Rishi dashes out onstage to pass her his mic, before she takes an opportunity to make a joke about his penis size. Problems are tempered with laughter, and as much as Sharul may tease and ‘flirt’ with an unsuspecting audience member in her musical number about ‘fuccbois’, as much as Rishi may accidentally let slip moments of internalised sexism (hilariously portrayed in a skit about buying apology flowers), these are two individuals and best friends who have managed to somehow build a life together despite their differences.

“How do you keep the magic alive?” The answer is simple: the relationship between Sharul and Rishi is not one of sappy Instagram posts or sweet nothings, but one that has been hard-fought, laced with mundanities and an acknowledgement of each other’s flaws and shortcomings. As we watch the two of them slow dance to a final song to close the show, the two invite other couples to join them in the dance, and there is a strange warmth that spreads from them throughout the entire theatre. We end the show believing that, amidst the mess, hard work, and tears, love just might exist after all.

The Rishi and Sharul Show 2 played on 14th February 2020 at the Capitol Theatre.

5 comments on “Review: The Rishi and Sharul Show 2”