T:>works (formerly known as Theatreworks) has never been one to shy away from trying new things, even with the coronavirus rendering them unable to proceed with live events. For the second edition of Not Ordinary Work (N.O.W.), Noorlinah Mohamed and her all-woman team have pivoted from their original plans and taken the festival fully online, and fully accessible, with its slew of digital programmes free of charge for anyone interested in attending.

Taking place from 15th July to 2nd August, N.O.W. 2020 carries on from its debut edition’s goal of celebrating and championing women, be they in the arts or beyond, tackling issues at the intersections of gender, class and race. “When I started N.O.W., it was in a way, a continuation of the work I did with the O.P.E.N. for the Singapore International Festival of Arts,” says Noorlinah. “I was inspired to go down a route that focused on women and their hidden stories, bringing these to the surface, and creating an event that celebrates what contemporary women are fascinated with and interested in doing in all its diversity and complexity.”

At the heart of the festival is a desire to shine a spotlight on lesser known stories of women, be they narratives of divorce, or tales of queer women. Even before the festival formally begins in July, interested viewers can already check out the digital exhibition on their website. Titled Women of N.O.W., the exhibition features interviews with 35 women from different sectors, each telling their story of their early influence and their critical engagement with needs and gaps of diverse communities. Live chats with the participants will be hosted by Aarathi Arumugam and Dhaniah Suhana, as directed by Anita Kapoor, on 15th, 16th and 17th July.

“Singaporeans live in silos, and despite what we may think, we really are quite segregated,” says Noorlinah. “Take for example the recent migrant workers issue we faced during the pandemic. Singapore is very advanced in the way we work, but oddly underexposed in the way we communicate with each other. We only ever focus on the economic, but have so little opportunity to be educated on concept of privilege.”

The rest of the festival comprises a combination of livestreamed performances, a digitalised competition, aurality projects, video narratives, conversations, and workshops to be made accessible for all online. These include Entangled Intimacies: Transnational Divorce Narratives, a verbatim documentary performance featuring accounts of transnational divorce narratives performed by women from the community. N.O.W. will also feature Ginette Chittick and Hazel Lim’s Unseen Labour – the making of, a video exhibition that focuses on the processes of the making of an exhibition, with narratives of unpaid labour of care and intimacy performed by women, which are then crafted as cross-stitch as well as a combination of different techniques such as tapestry weaving, latch hooking, and embroidery.

As for the performances, N.O.W. will feature the premiere of Jo Tan’s comedic one-woman show King, following an office lady who cross-dresses as a man for an office party. Directed by Jasmine Ng, King will also be accompanied by a livestream talk with queer art-makers Liting Tan and Stephanie Chan. N.O.W. will also present Eleanor Tan’s radio play The Book of Mothers. Directed by Edith Podesta, with sound design by Inch Chua, the play regards itself with the difficult choices women face with regards to career and motherhood.

Other events that will be presented include Sound Stories, by LaSalle acting graduates Lauren Sim, Chaya Gonzales, and Shahid Nasheer, featuring stories using sound effects, in response to artworks by women artists that have been overlooked or forgotten in history. Meanwhile, Inch Chua and Lim Tingli’s Sound Sense unpacks their experiences of telling an immersive story through sound, while Carving Space Underground features punk rock female musicians Fuse, E-thereal, Radigals and Obstacle Upsurge, speaking on the multiple roles they play within the band and within society as women, mothers, and musicians. 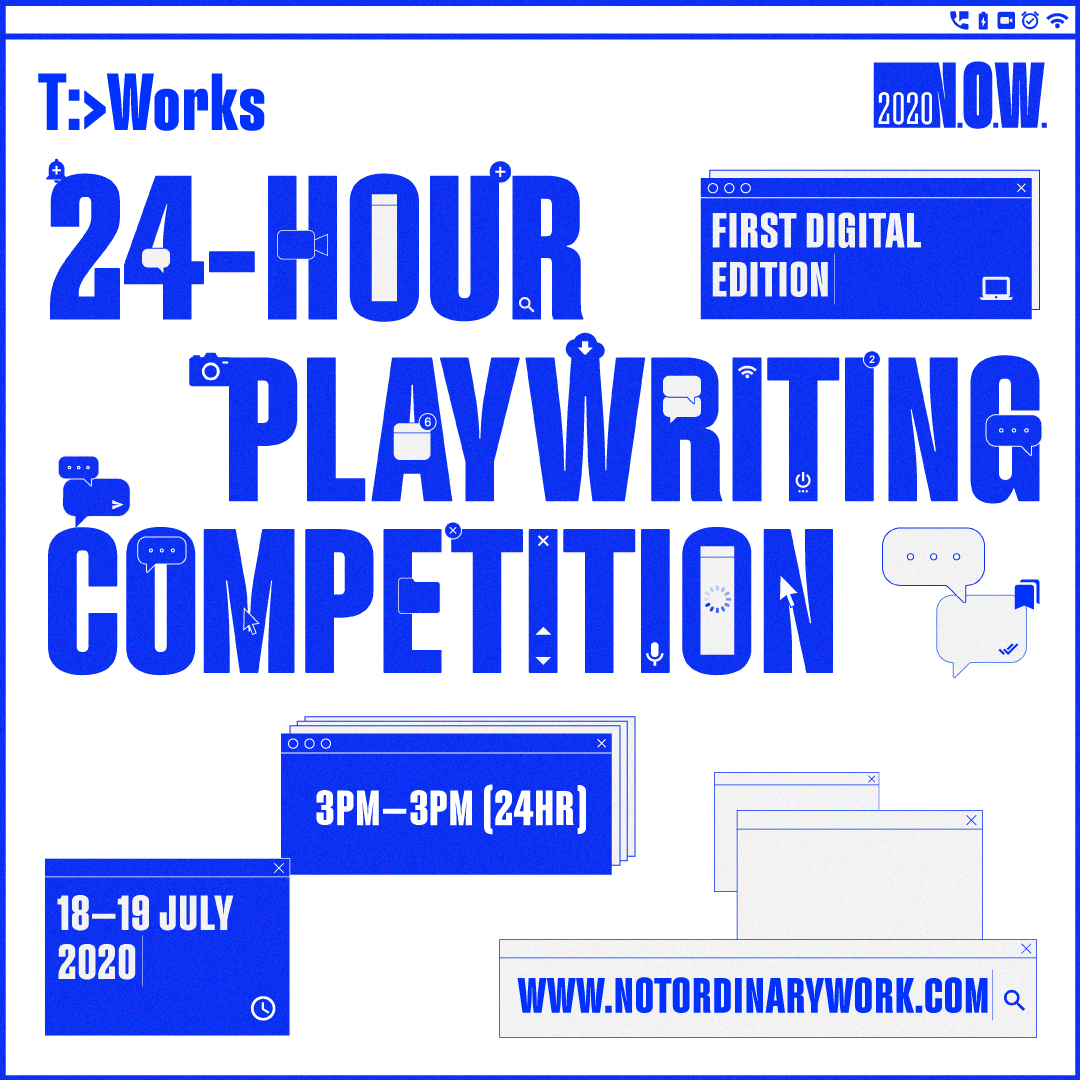 In addition, the annual 24-Hour Playwriting Competition will once again be conducted under the banner of N.O.W. This year, the competition will be held entirely online, and feature three female judges: writer Nabilah Said, playwright and director Kaylene Tan, and producer/filmmaker Jasmine Ng, each of whom will also be conducting workshops in the leadup to the competition and will be available to give advice over the course of the competition. Instead of writing a play, participants will be tasked to create a 10 to 15-minute performance piece that can be presented on either one of multiple digital platforms (e.g. on social media or Zoom), or a hybrid work that is written for a real-life and virtual stage.

On making the shift towards the digital, Noorlinah and her team made a conscious effort not to engage with experts in the field, intentionally using accessible apps and technology such as Zoom and Soundcloud to create the work. “When we decided to go digital, we wanted to structure all of this using our own vocabulary and make our own decisions how to roll it out,” says Noorlinah. “Our aim was to go native, and we were lucky enough to have collaborators who were open to playing with these new mediums. Take for example how we initially wanted the rock bands to do a live concert, something we couldn’t replicate via video, as it lacks the atmosphere. Instead, we chose to do a listening party, and turn our attention to the lyrics and meaning of each song instead, something we so rarely get to do at a concert.”

Noorlinah adds that the success of the festival in 2019 has already led to her receiving enough ideas and proposals to last her beyond 2021, for which she initially set as the final edition of N.O.W.’s 3-year run. “I think with a year of experience behind us, we’re finally getting intimate with the platform, and constantly improving, and learning about how to take it to the next leg,” says Noorlinah. “Much like how T:>Works is no longer an arts organisation that is purely about theatre, N.O.W. has also evolved beyond simply having its lens on the arts. We’re interested in making sense of the art making process, the curation process, the intercultural, interdisciplinary and intersectional nature of it all, and unpacking that.”

Beyond its actual programme, T:>Works has also established T:>Care – a Creative Action Resilience Enabling initiative to support projects created and developed by women to make positive change in our communities. This year’s projects include some of the causes and organisations that are featured in the Women of N.O.W. digital exhibition, with members of the public encouraged to donate to the cause as well. An anonymous donor has pledged, up to S$10,000, to match donations to this campaign, dollar for dollar. T:>Care will accept donations till 10th August 2020, and divide the contributions equally to Keeping Hope Alive, 3Pumpkins, The Codette Project, Project X, ItsRainingRaincoats, Project Chulia Street, and N.O.W.

“N.O.W. is really about organic evolution, and honestly, I have no idea how it’s going to continue to change in the future,” says Noorlinah. “The lens has become sharper, and bring into relief these issues that go under the radar, these intersections of gender, race and class, issues that I myself am learning about as well. Sometimes I wonder about who is going to come see all this, but then I think about how these are interesting issues that will definitely strike a chord with an audience somewhere. We’re virgins in the digital realm, but we must not be afraid to embrace failure, to keep creating and to believe that this programme can and will find a way to connect with someone out there.”