HONG KONG – Of all the artistic mediums, it feels like it is dance that has adapted surprisingly well to the new normal, with many companies working in tandem with filmmakers and videographers to enhance already arresting choreography with smart camera angles and film techniques. The latest of these companies to join the growing number of dance film-makers is Hong Kong’s City Contemporary Dance Company (CCDC), who streamed the first episode of A Lover’s Concerto last Sunday to kick off their Digital Dance Season.

A Lover’s Concerto plays on CCDC’s illustrious alumni, picking out dancer-couples who met while working together at the company to perform works playing on their relationship with each other, often harking back to past performances they were in together and the memories formed. In the first episode, couples Choo Tee Kuang and Loke Soh Kim, Bobo Lai and Terry Tsang, and Shirley Lok and Bruce Wong each presented new works on film as part of the programme, each one representing a different era of CCDC’s rich history. What was particularly interesting was how each worked was preceded by an interview segment, as the couples recall how they met, how they’ve lived their lives since then, and some of their favourite things about each other. It was evident with each couple that the relationship they shared contributed to the incredible chemistry they share in front of the camera, no doubt a key factor to making each of the works so powerful to watch. 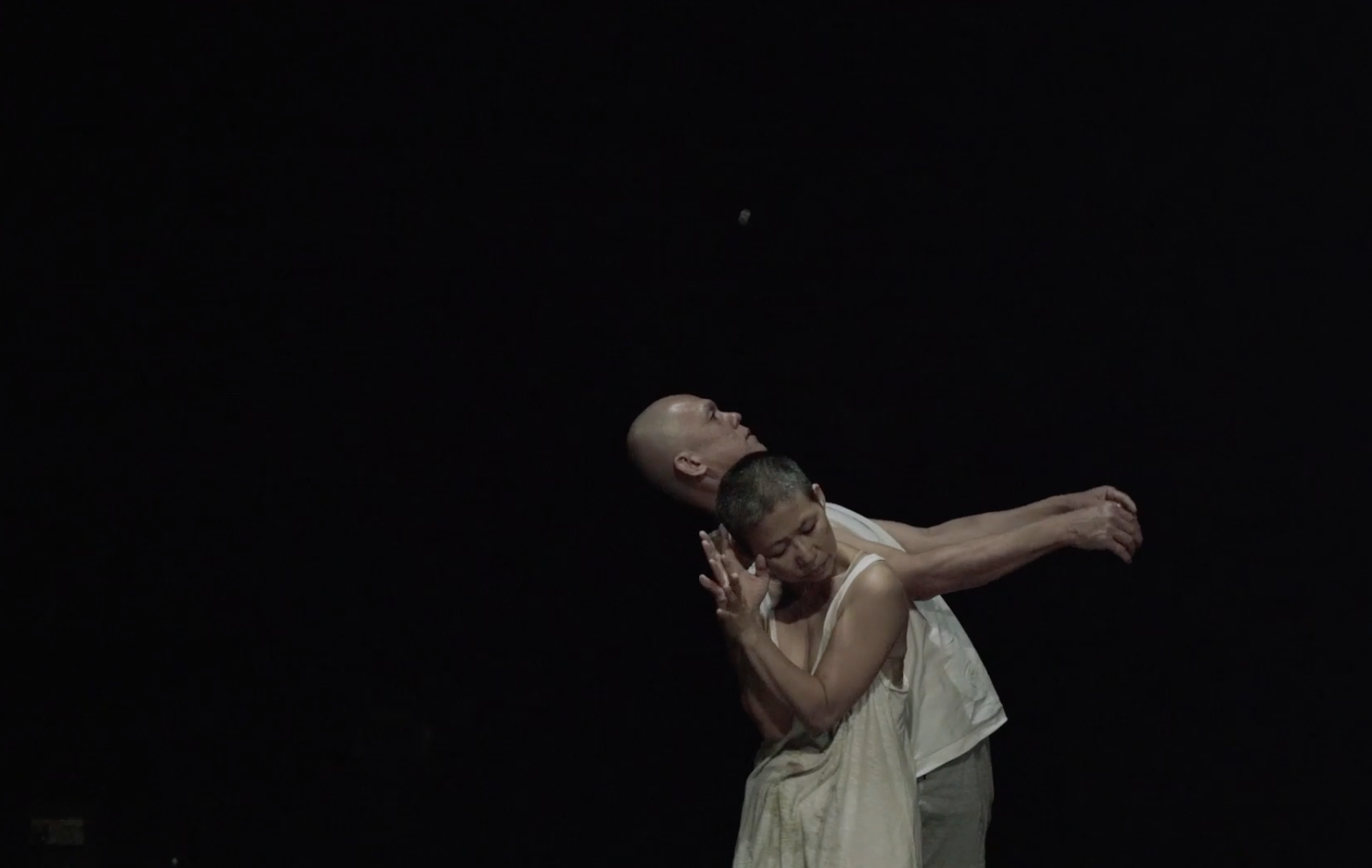 The evening opened with award-winning Malaysian dancers Choo Tee Kuang and Loke Soh Kim, who created their work alongside choreographer Lee Ren Xin. Married since 1989, the couple fondly recall their time in Hong Kong, recounting how they’ve built a life with each other. Loke comments how ‘good vibes can’t be trained’, and in dealing with the conflicts they have with one another, learn to let it go and develop their mutual understanding of each other. 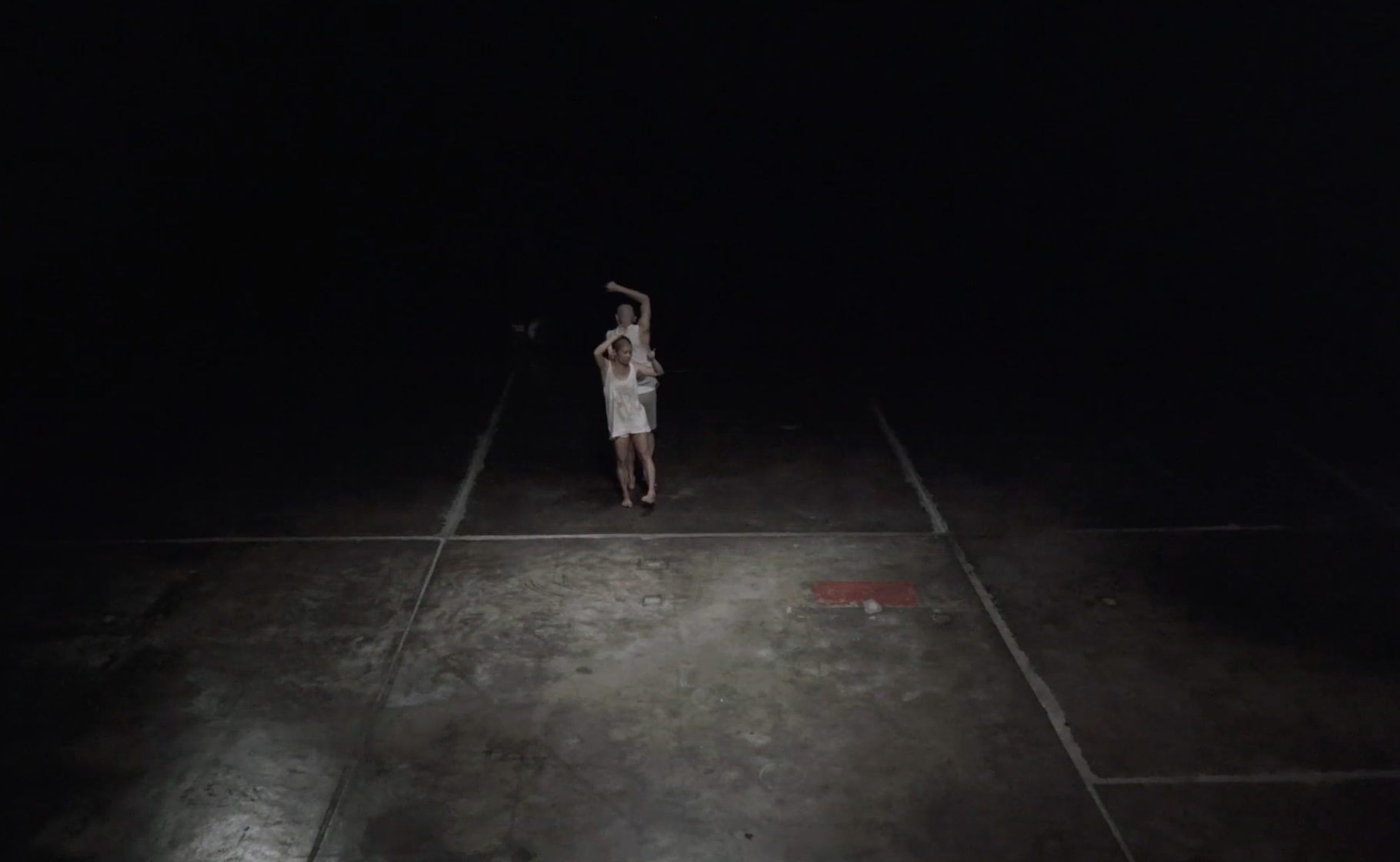 In their performance, La La Li La Tang Pong 2020, the work draws from a 1992 CCDC production in which both Choo and Loke performed together, taking its title from a popular children’s game in Malaysia.The performance opens with the couple dressed in their undershirts, move around each other in a large, industrial looking-space and a rehearsal studio. Almost meditative in their movements as they play a ‘game’ with each other, we notice how little space there is to move, yet always managing to find their way around each other. Always close but never touching each other, their slow, intimate oscillations seemed to suggest a tenderness with each other, completely in control while remaining keenly aware of each other’s bodies, ending this segment on a note of joy as they finish their ‘game’. 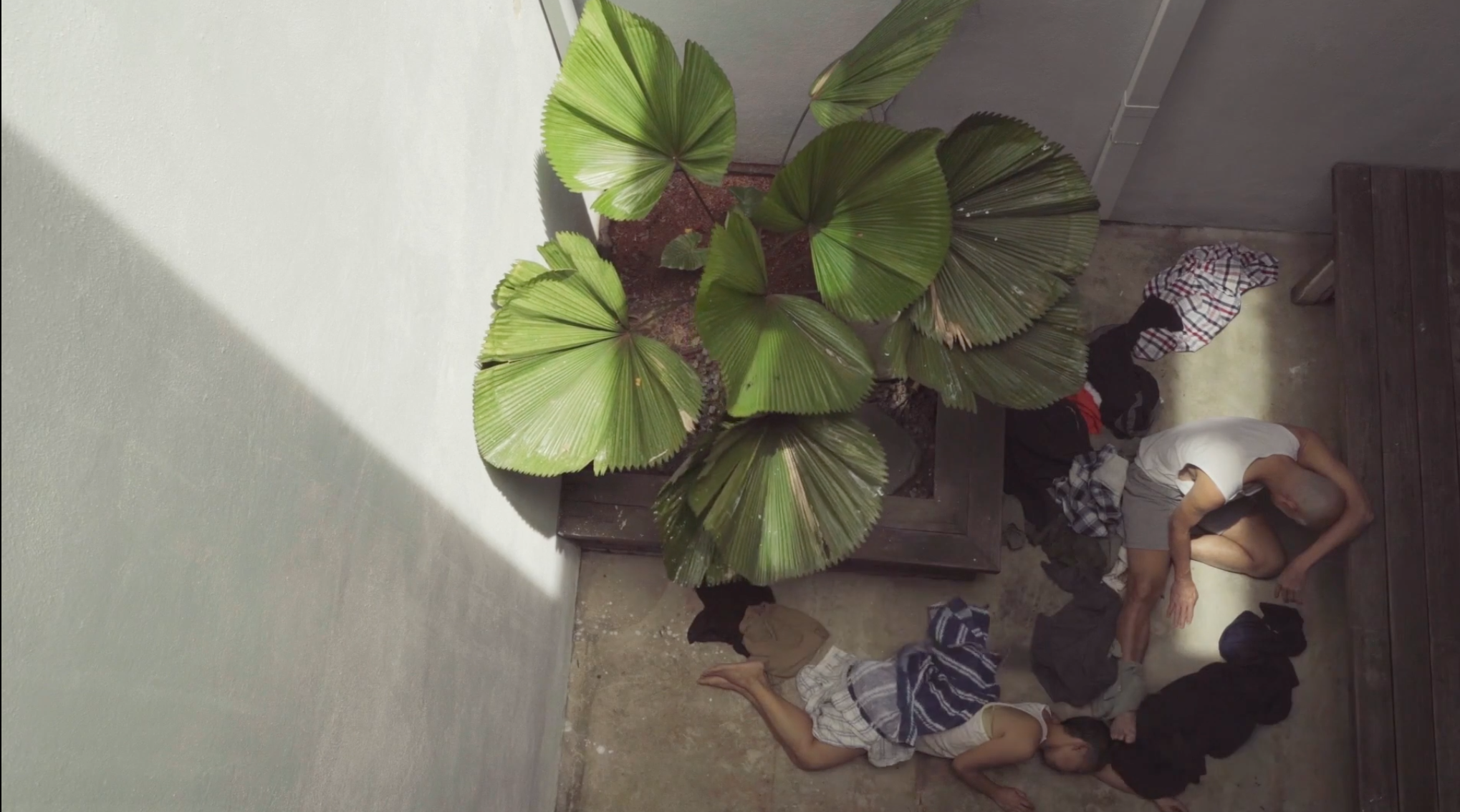 We then watch archival footage of the original 1992 La La Li La Tang Pong Choo and Loke performed in, watching them in their younger days before cutting back to the present, where we then see them lying together in a small, sunlit alcove, while various articles of clothing fall upon them. We think of these clothes as emblematic of everything they’ve been through in life, yet they appear calm and serene here, finding solace in each other’s presence. They get up, and try to pick up every article of clothing, yet are unable to pick them all. We think about how this is a part of life, and as much as we try to ‘pick up’ everything in life, there are times we simply have to leave some things behind. 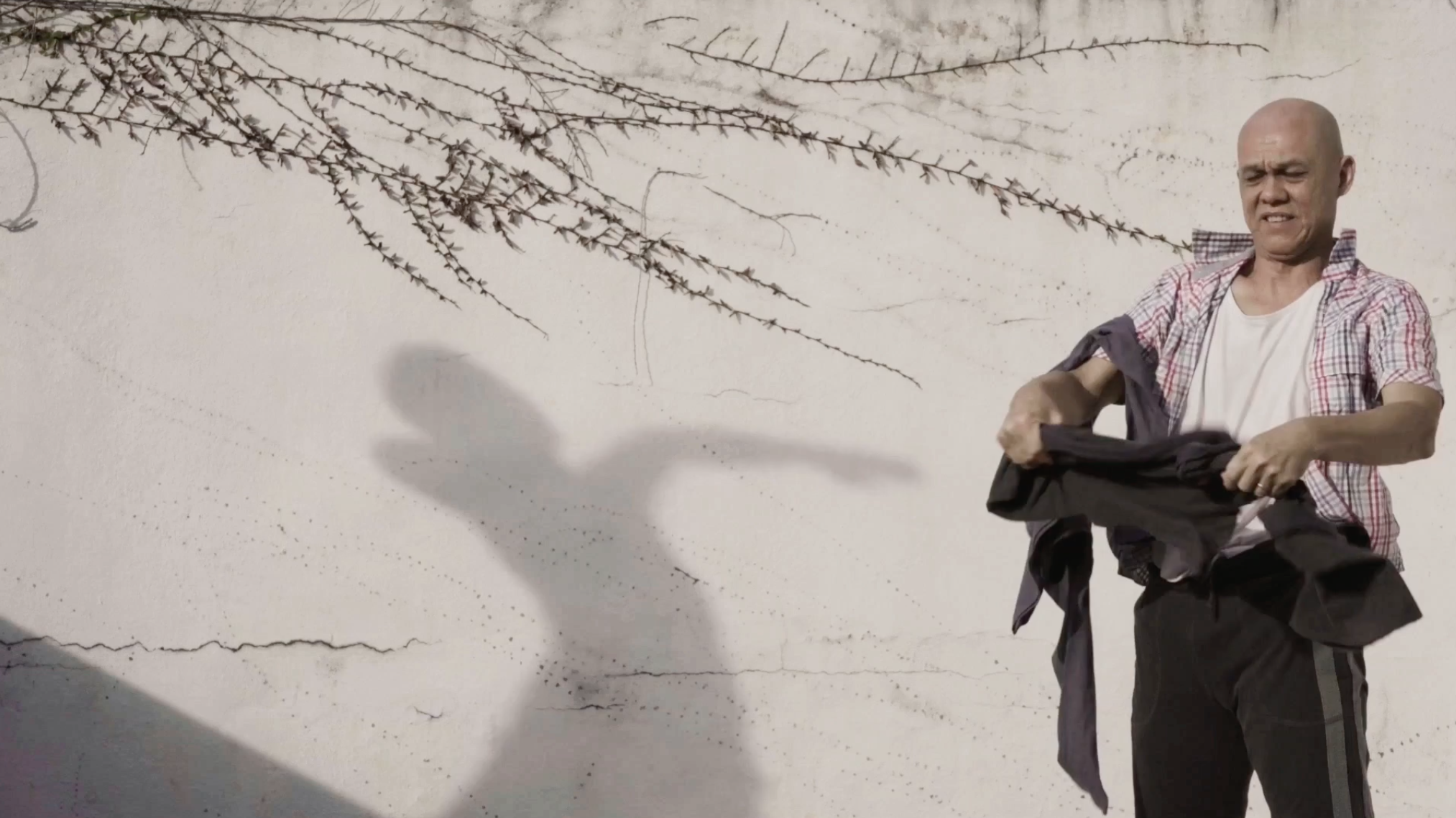 We then move to the backyard of their home, where we swap between scenes of either Loke or Choo standing alone in a pile of discarded clothes, while even more clothing is thrown at them. Yet they are not truly alone, as we notice the other’s shadow posing and performing beside them, as if they continue to spiritually be with each other even when physically apart. At times they manage to pick up some of the clothes, putting them on as they continue, adapting and adjusting to the challenges they are faced with. We think about them as a couple, working together to get through whatever life throws at them, not necessarily having to pick up every article of clothing, but making do, and doing what they can to get by, as long as they have each other’s support.

Now, we see the couple in an outdoor area adorned with plant life and greenery. Despite being surrounded by all this, the couple stand out as they dance with each other, clearly enjoying each other’s company after weathering the storm together. After watching this for a while, the camera zooms out, and we see that they are in fact, on higher ground, on the second floor of a building, something we don’t notice from the overhead shot. We think how there are always different perspectives to the same incident, and how there are always two sides of a coin. No matter what happens to them, they know that their love will see them through, as they emanate joy simply from being together, appreciating each other’s presence, fully and completely at ease in each other’s arms. 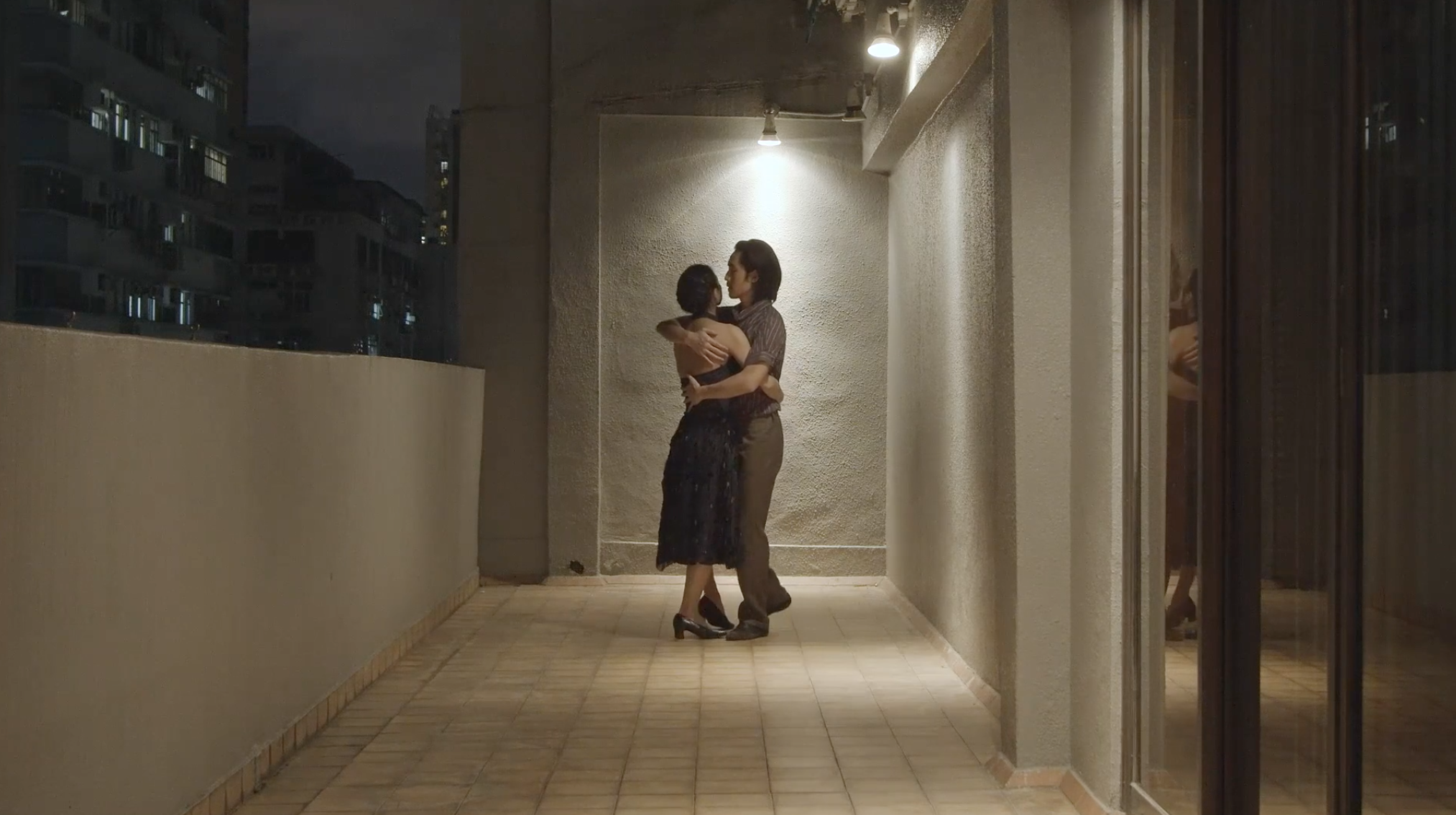 For our second piece of the evening, we were introduced to young couple Bobo Lai and Terry Tsang, who belong to a much more recent batch of CCDC dancers. In their piece Lover and Loner, the couple performed excerpts from two duets the couple were previously in, as choreographed by Noel Pong, providing an outsider’s point of view to communicate to them what they cannot see. Having performed multiple duets together previously, the two seem to have an intimate, complete understanding of each other’s bodies, comfortable enough with each other to tease, and optimistic enough to see that A Lover’s Concerto is proof of how many successful couples have emerged because of CCDC. 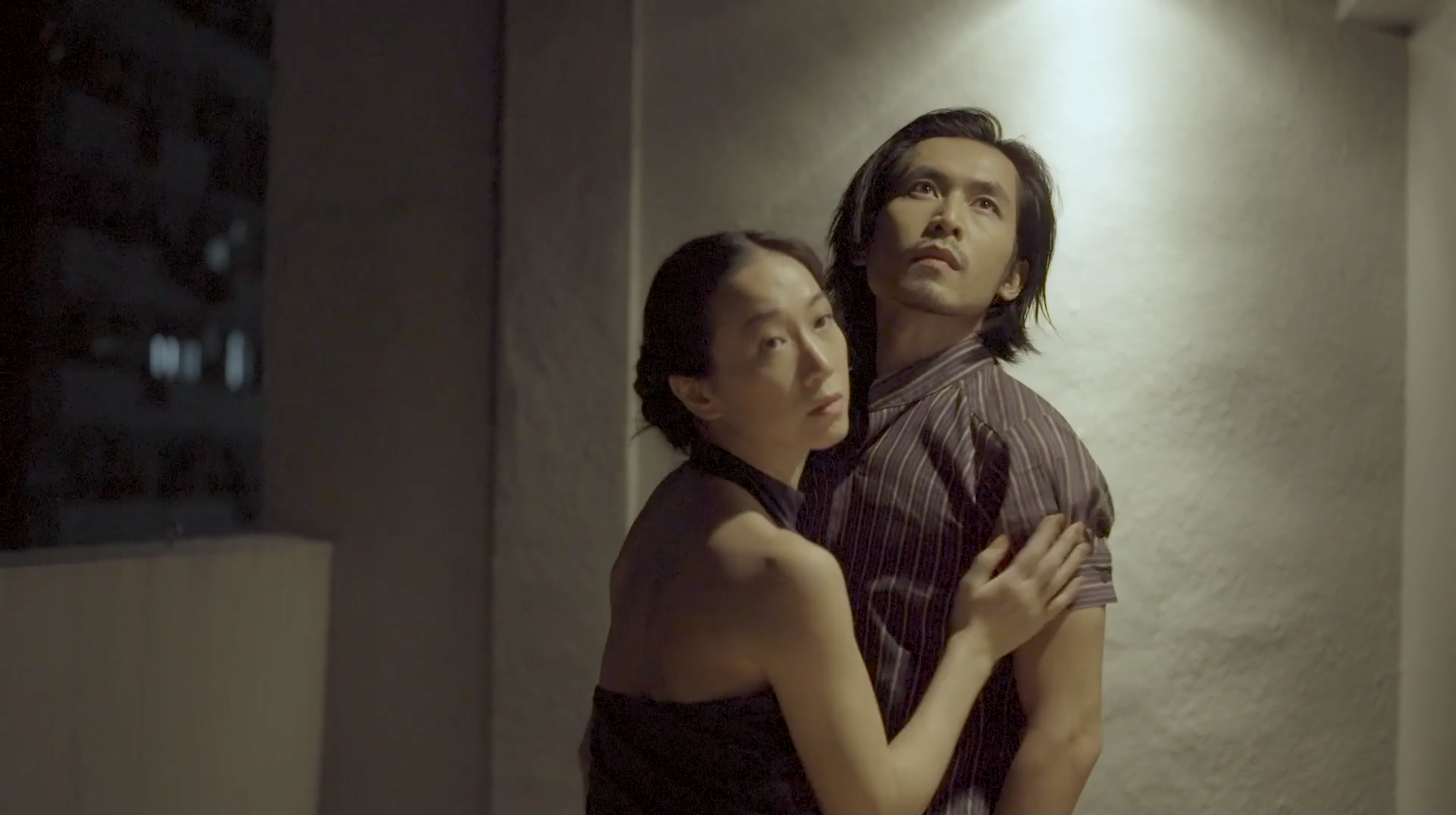 Lover and Loner begins as Terry wanders the streets alone, searching for companionship he eventually finds in Bobo, as they dance on the balcony of a Hong Kong flat. There is an element of romance as the two waltz across the balcony under the moonlit sky, with Bobo dressed in a simple black cocktail dress, and Terry in a short-sleeved pinstripe shirt and pants. As she dips, Terry catches her, and their movements feel light and elegant. At the same time, one cannot help but feel that the two are feeling forlorn, with an eerie quietude and stillness to the atmosphere that consumes us as viewers, with only the sight of Hong Kong’s signature red taxis passing by on the road. Throughout the dance, they constantly look upwards and away from each other, as if searching for something more. We end this segment with Bobo alone, as the camera, from a top-down aerial view, zooms out to reduce her to a speck on the balcony, the view of the empty road beside the flat emphasising the loneliness she is now faced with. 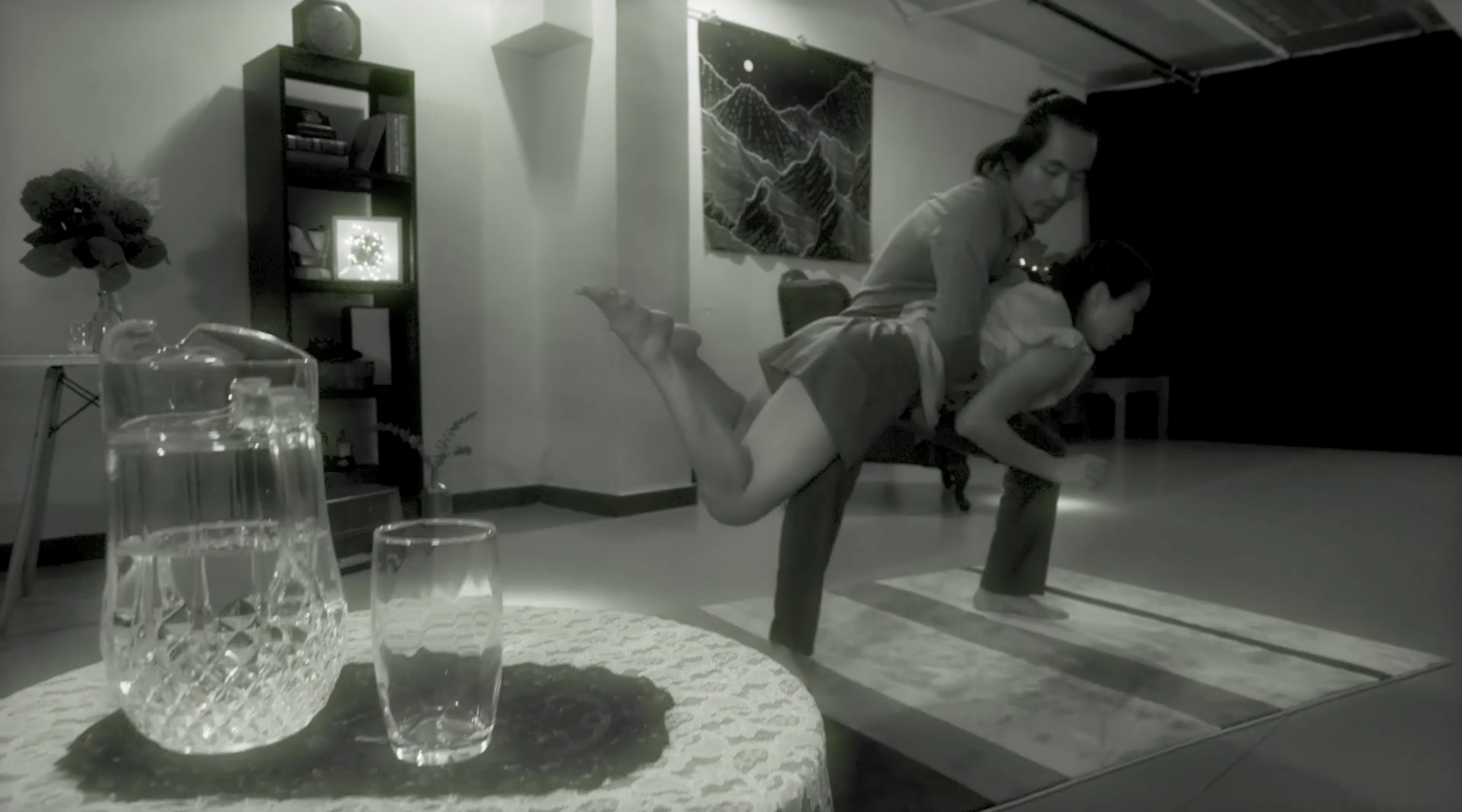 Cutting to the inside of the apartment, the film is now overlain with a greyscale filter, as we follow Bobo and Terry’s characters moving across the living room. With the camera focusing on a jug of water on a table, we notice that there is only one glass, and wonder if there is solitude amidst their togetherness. Towards the end of the piece, we see Bobo walking alone down an empty street, and wonder if these scenes of them dancing together are merely mirages they see, as they long to be in each other’s arms again. 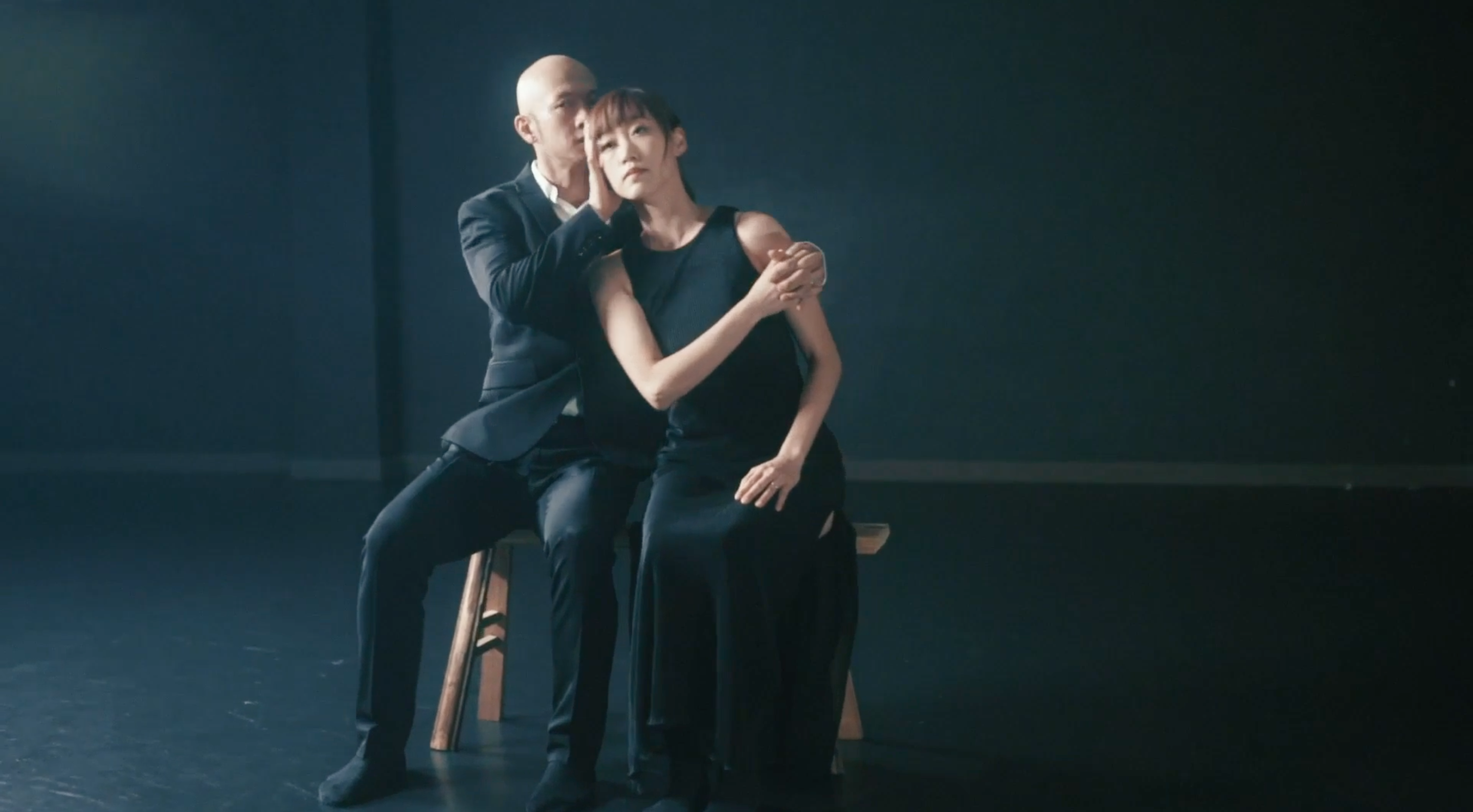 In the final performance of the night, Bruce Wong and Shirley Lok presented Rainbow Home, a piece that reflects their feelings towards the physical space of their home and CCDC. Bruce and Shirley display immense respect for each other’s differences and unique strengths, and while conflict is inevitable as a couple working together artistically, their relationship allows that conflict to birth new ideas, and is an opportunity to talk and learn to accept each other wholly. 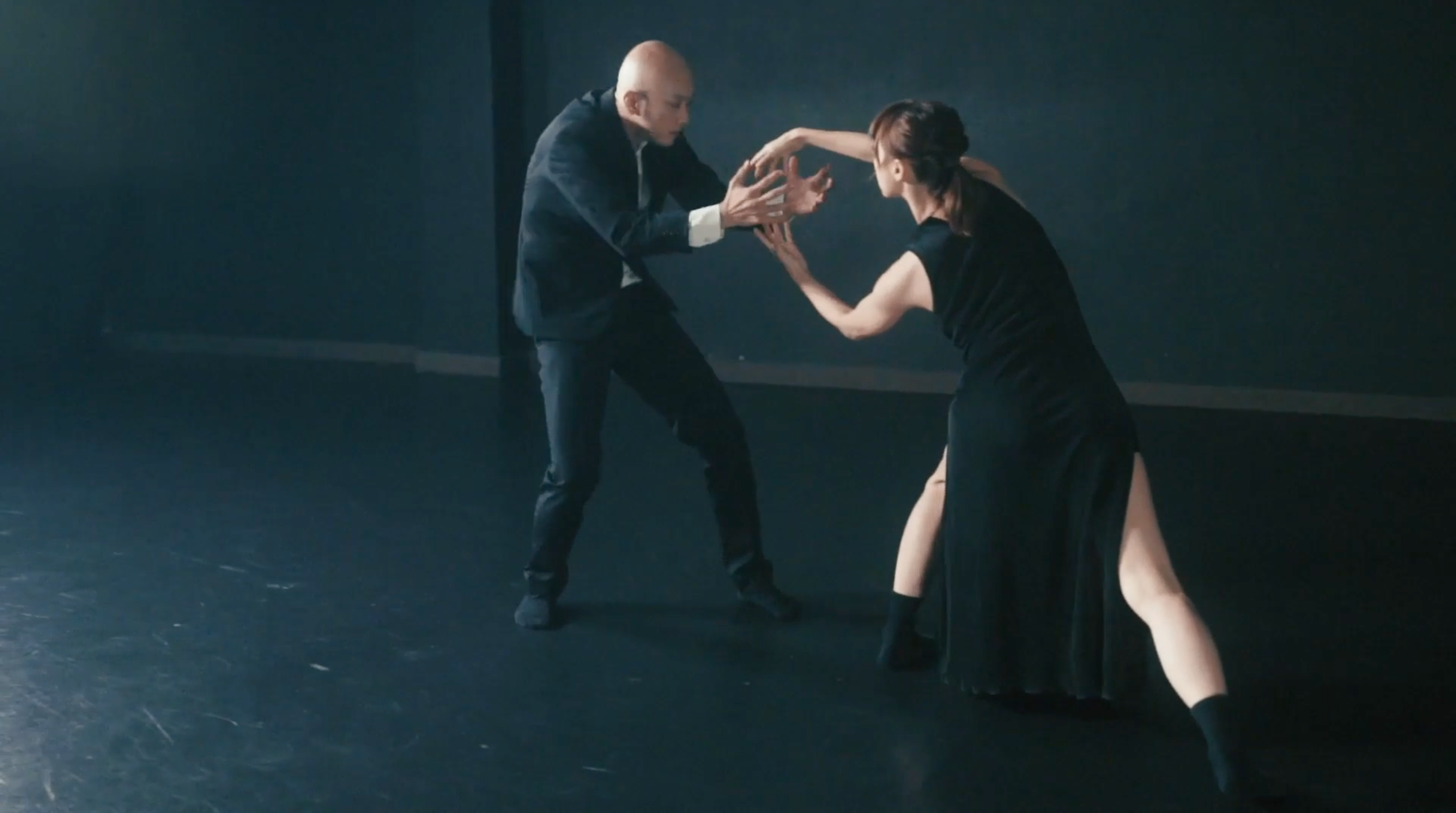 With Rainbow Home, the piece began with Bruce and Shirley as they held hands, signifying their connection. At times, it seems as if they disagreed with each other, yet always come back together. Even when Shirley indicates a desire to be alone, Bruce crouches behind her, as if trying to listen and come to an understanding, always there for each other and learning to compromise for the sake of love. We recall how in the interview, Bruce comments on how light Shirley’s body is, with the performance showing this off when he lifts and carries her effortlessly and elegantly through the air, before they dance in sync with each other, closer than ever before. She holds his head and lays it to rest, tenderly, as if they have made up after a fight, before bringing this segment to an end. 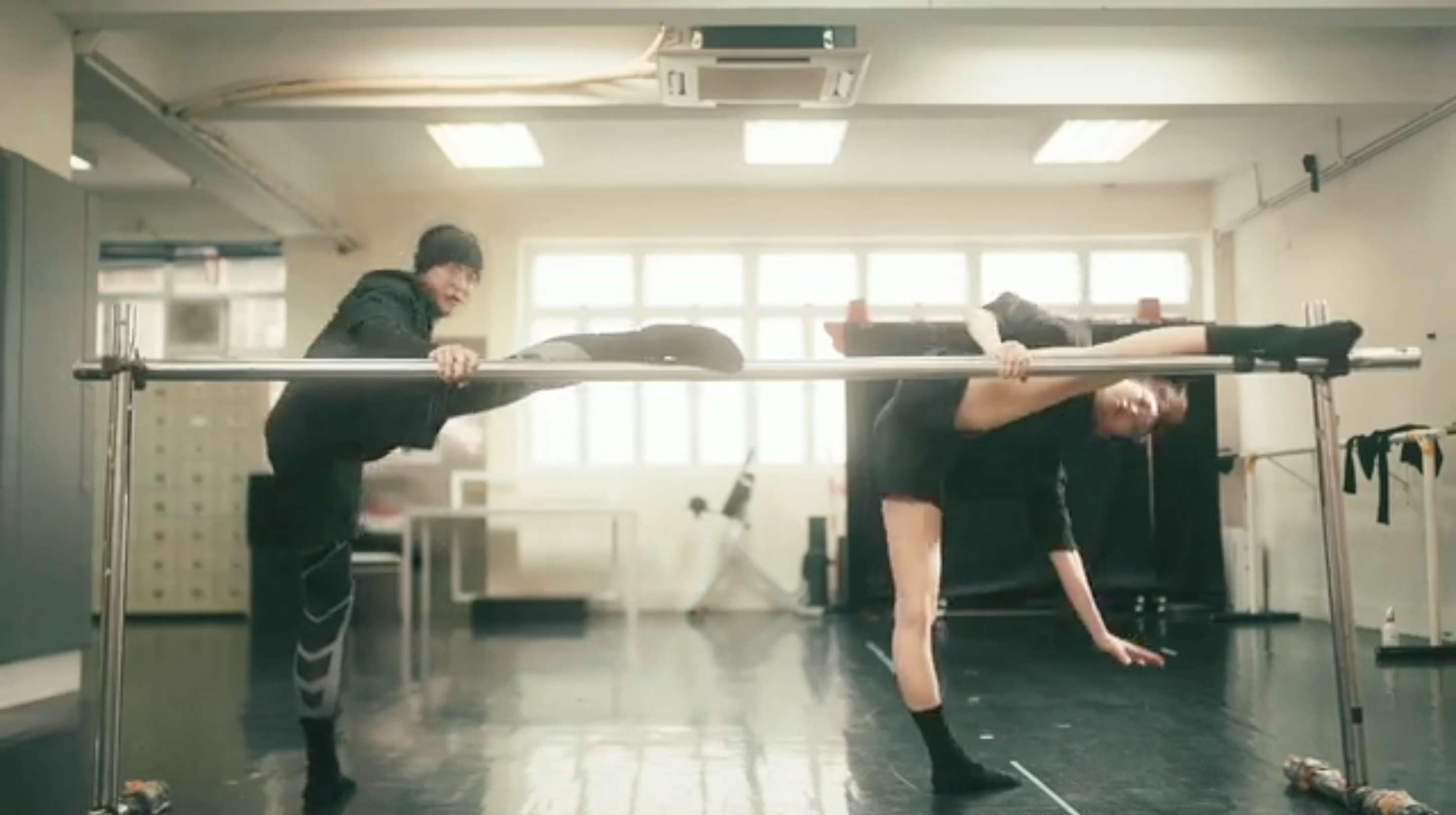 We then cut to a scene where Bruce wakes up in his house, and stepping out of his apartment, walks to CCDC located nearby, to indicate how close the company is, literally and figuratively. The two of them begin rehearsing in the studio, with the camera focusing on their feet as they practice ballet-style movements with a makeshift bar. With ballet as Shirley’s forte, Bruce seems to be adapting to her style, learning from her and what she loves. Almost showing us how in a relationship we compromise because of love. 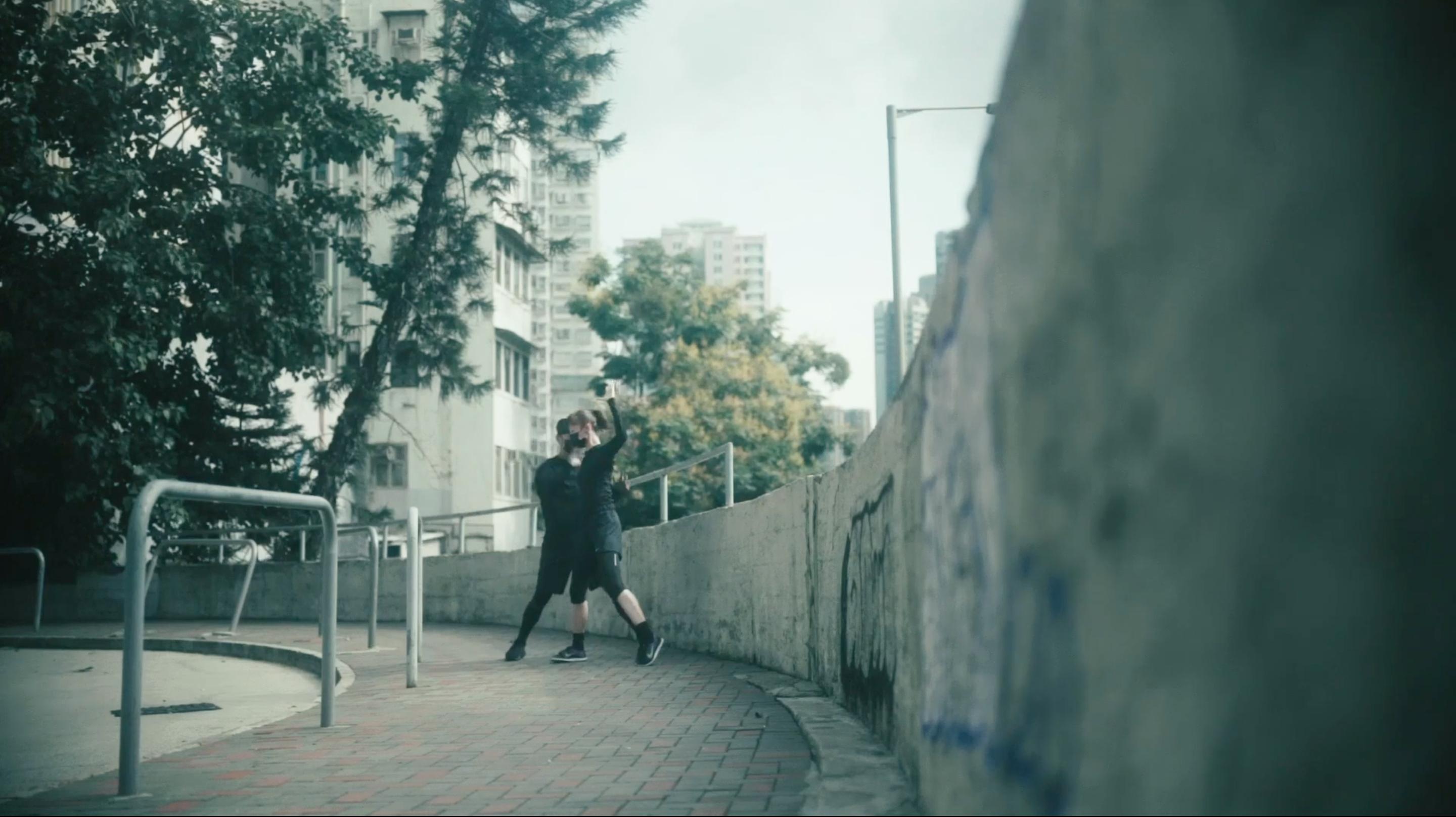 Dance however, is never confined to just indoor spaces, and donning face masks, the two then exit the building, the camera following them as they dance at the railings by the roadside, before they rush to the city’s open spaces in parks. The city is curiously empty (due to COVID-19), but their coordinated enthusiasm and energy fills it, performing even without an audience to show how integral dance is to their lives. 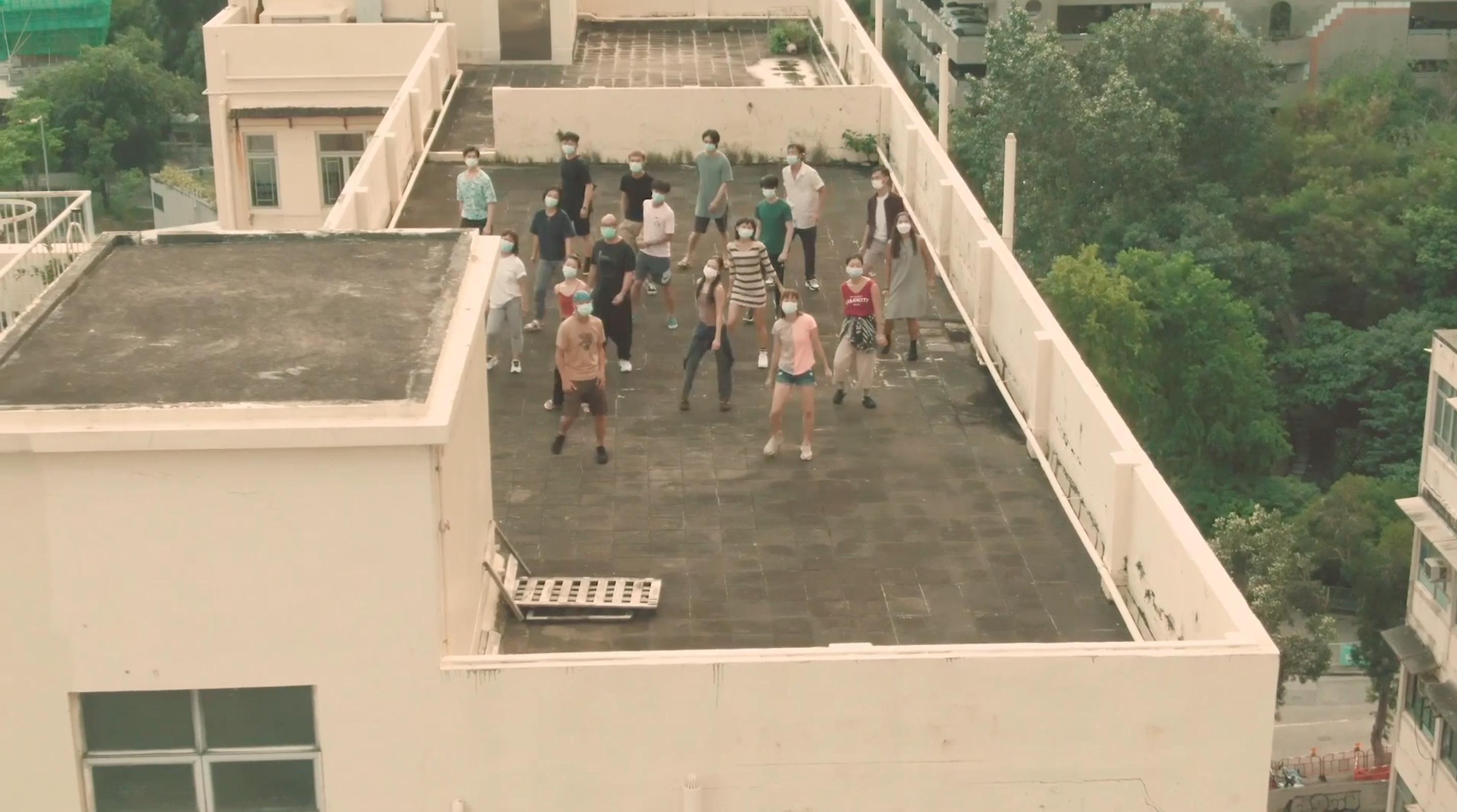 In the final scene, set to Serrini’s ‘IDGAShyt’, we watch as Bruce breathes out smoke, and it seems as if it is his very soul that we are seeing leaving his body and settling comfortably in CCDC, where he feels he belongs. We cut to shots of various members of CCDC, forming a montage of dancers coming together to perform on the rooftop together to represent their tight-knit relationship as a company, a place to call home, and emanating with an overwhelming sense of community.

Working together with one’s partner is no doubt a challenge, with how one has to clearly draw the line between the personal and the artistic, learning to agree to disagree and face conflicts over opposing creative directions. Yet as A Lover’s Concerto shows, by being able to overcome these obstacles, the resulting works are made more powerful still, thanks to each couple’s undeniable chemistry and ease with which they perform together, perhaps keenly aware of each other’s bodies and physicalities. Professionally shot, evocative in its choreography and riveting to watch, A Lover’s Concerto is proof that a pandemic cannot stunt the arts, and all it takes is the right collaborators, a spark of creativity and a willingness to commit to the work to craft quality results, and that love can truly conquer all.