SIFA returns to live theatre with a tribute to Ming Dynasty poems in this stark but poignant production.

While the final part of A Dream Under The Southern Bough has been delayed due to the COVID-19 pandemic, with the introduction of live performance pilots to test the viability of venues accommodating performing arts, Singapore International Festival of Arts and Toy Factory have been given an opportunity to present an interim solution, with Poetry Under The Southern Bough.

Playing at the Drama Centre Theatre last Saturday, Poetry Under The Southern Bough is separate from A Dream Under The Southern Bough, acting as a parallel rather than a continuation. Directed by Timothy Wan, Poetry takes 20 selected poems by Ming Dynasty writer Tang Xianzu (the original playwright of Dream), and combines stage design, live music, dance and Chinese opera to present these recitations in a whole new light. 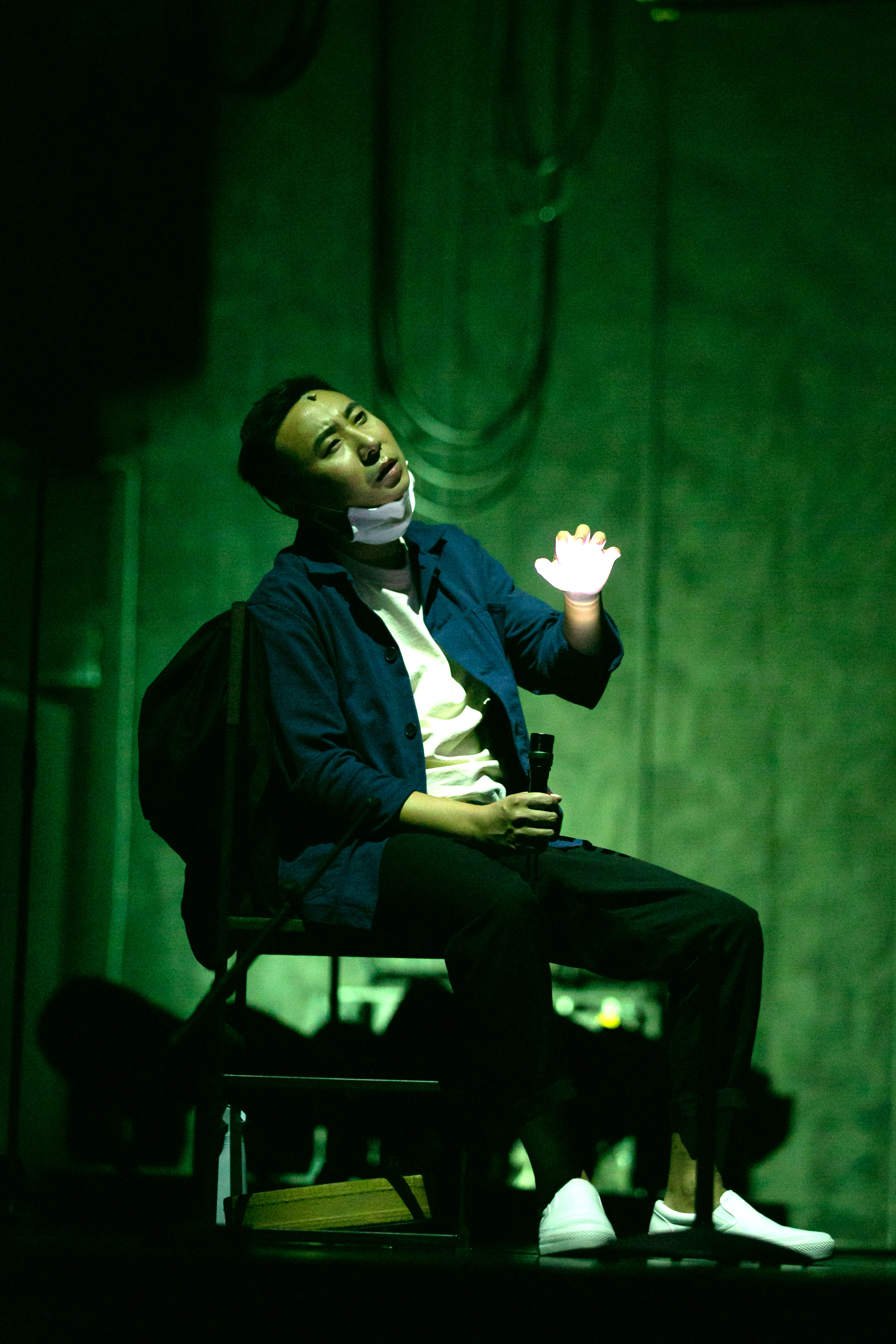 As the second live performance we’ve attended since the circuit breaker was implemented, once again, we were introduced to the new normal of watching shows, reminded to have our masks on at all times, and to remain in our seats when the show ended, so as to be ushered out safely in groups to avoid close contact. The show itself also reflected that when it began, as actor Li Te walking out with a mask, shining a torchlight around the empty stage before he began sanitising the area.

Li Te was then followed by the other performers: Peking opera actress Zhang Manxi, dancer Ryan Ang, and even the musicians – percussionist Eugene Toh and cellist Huang Ting-Yu. Each one donning a mask, they sanitised their own performance spaces before sitting down, almost as if reminding us of the many safety measures that have been put in place for a performance. 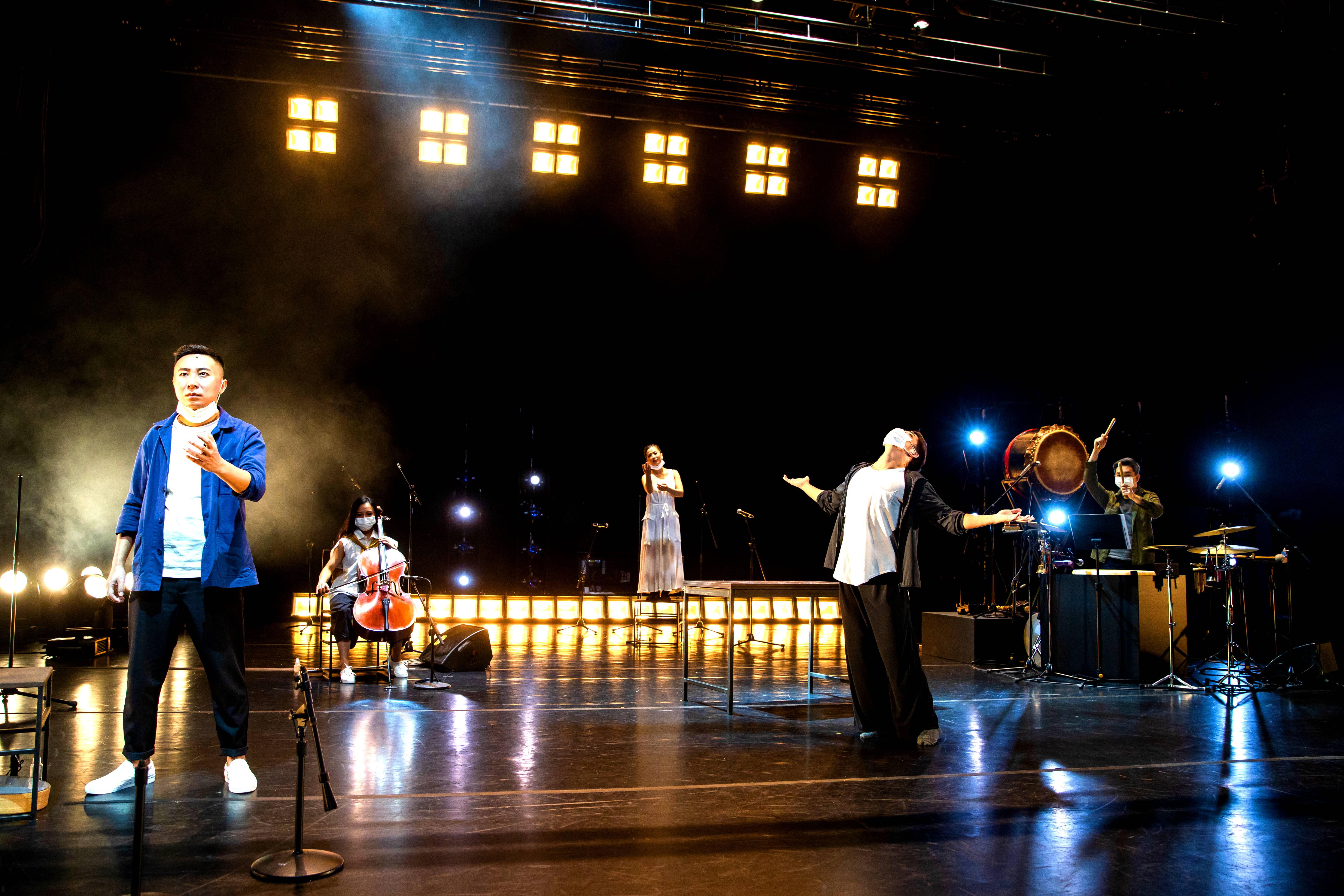 Huang Ting-Yu then starts to play, as Ryan slowly removes his mask and begins dancing, reacting to the music from the cello and presenting his swirl of emotions through his movements, while Li Te and Manxi begin reciting poems. Rather impressive was how Manxi switched effortlessly between her regular speaking voice with a more Chinese operatic style of speech, showcasing how experienced and skilled she was in her craft.

Perhaps the most obvious element of Poetry Under The Southern Bough isn’t something that is present, but those that are absent. With a sparse set and performers dressed in casual attire, there is almost a disjoint between the grandiose, alluring language of the poems and what we see before us. This is remedied somewhat by Gabriel Chan’s lighting and the music, literally brought front and centre by having the musicians clearly visible and present onstage before us. Both Ting-Yu and Eugene work well together to showcase their respective instruments to evoke the emotions and atmosphere of each scene. If one closes one’s eyes, one could almost imagine the scene before us, such as how Ryan follows the beat as Eugene plays the drums, letting his body and mind respond to the rhythm.

At the end of this particular sequence, Ryan echoes the words “the world changes unusually”, while we see empty fly bars moving up and down. This is truly as unusual as the theatre gets, eerie in how there is a distinct absence of set pieces, and reminding us of the full production that this could have been, and the potential it had as a show to have a bigger idea, a bigger story, and a bigger visual impact given more time and resources. Even then, director Timothy has done well to subvert the lack of resources by bringing this message to the fore, emphasising how strange live theatre has become in the wake of COVID-19. Even in how each performer is given at least 1 metre safety distance, beyond hygiene purposes, helps fill the space and gives them room to stand out and shine.

As Ting-Yu plucks at the cello, we can almost feel raindrops falling, with Manxi getting emotional in her recitation and the fly bars dropping one by one, almost like how the stories and poems are unfolding, aligning as the stars themselves do. Manxi echoes the phrase “a shepherd dreams of fleeting love”, and Li Te asks us to focus on her gaze. The lights dim, and Manxi arrives carrying a lamp, walking to the middle of the stage and hooks the lamp onto a fly bar. The show ends on a poignant note as the lamp remains lit, reminding us of how even in the darkest of times, there is a way to carry on, hope burning bright as we prepared for the theatres to fully open again soon before long.

Poetry Under the Southern Bough is available from 10th October 2020 as video on demand, accessible through the SIFA All-Access online platform. To get a deeper understanding of the history of the play, audiences can also tune in to Tang Xianzu: Rebirthing Of A 400-Year Old Dream. This animation video traces the life of one of China’s greatest dramatists – Tang Xianzu and his most well-known work, A Dream Under the Southern Bough. The Mandarin version of this video will also be available on SIFA All-Access from 2nd November 2020.

0 comments on “Review: Poetry Under The Southern Bough by Toy Factory Productions”