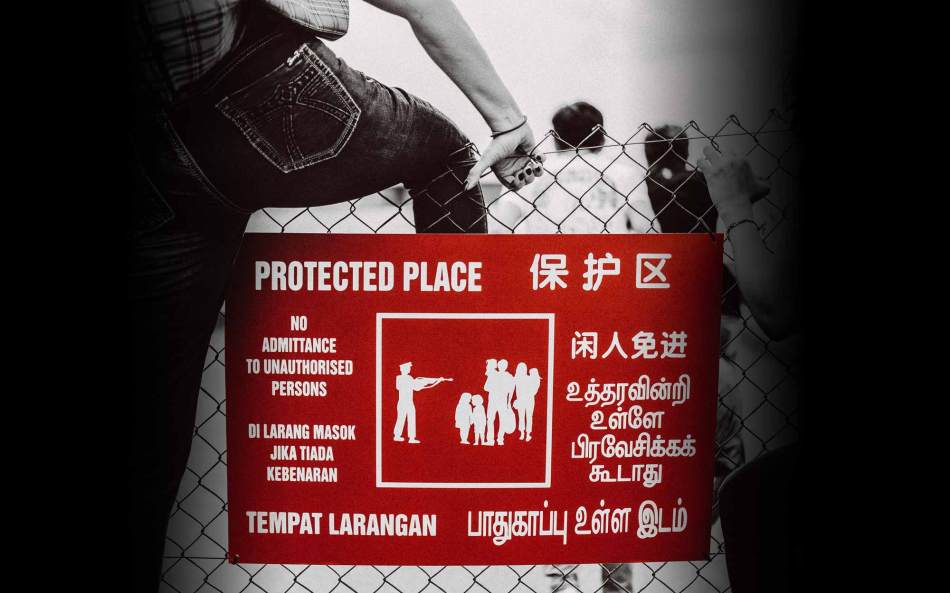 In a world where Brexit is reality and Trump the president of the United States of America, how could things get any worse? Plenty, as writer Stephanie Street cranks the apocalypse up to eleven with Pangdemonium’s second original script of the year: Dragonflies, presented as part of the 2017 Singapore International Festival of the Arts.

Set in a completely plausible version of the near future, the world of Dragonflies is a bleak one: the UK experiences torrential rain and intense flooding due to poorly constructed drainage systems, countless refugees are turned away at the borders and sent home due to overcrowding and increased xenophobia, and Singapore experiences frequent riots from the unhappy hoi polloi, while the already stifling heat grows ever more suffocating and water rations are in place.

Amidst all this, Leslie Chen (Adrian Pang) is undergoing his own tragedy as his once happy life rapidly unravels before his very eyes. Dragonflies opens, quite morbidly, with the funeral of Leslie’s wife Sandra (Victoria Mintey) in the UK. In the wake of her death, Leslie is unable to inherit ownership of their family home in Dorset, due to his Singapore citizenship, and with no available options, he returns to Singapore with his adopted daughter Maxine (Selma Alkaff) in tow, moving back in with his blood family, only to find that he has become a stranger in his own home, hostility from all sides.

Stephanie’s life seems to be partially reflected in Leslie – after all, she herself is a Singaporean born woman, only recently having returned from the UK, where she has spent most of her adult life. Her script reads realistically, the conversations between characters a natural exchange, with a healthy dose of both friendly banter and contentious disagreements. Despite being set in a speculative future of the world, there are plenty of uneasy, familiar sights and sounds, whether it’s the casual racism tossed about by Leslie’s sister Annabel (Tan Kheng Hua) or the hilariously annoying customer service survey required by the hospital’s nurse (Thomas Pang). Part of the play’s success lies in how realistic and possible it all is, and the genuine threats Stephanie writes into the script feel like they have the potential to seep into our own reality, with very real stakes for her characters we’ve come to know and relate to and evoking intense sympathy as we watch a family completely come apart, helpless in the face of circumstance.

Dragonflies is also armed with an incredibly capable cast, each of them fully embodying their characters as intended. Playing the Chens’ longtime domestic helper Agnes, Frances Lee adopted a strong Filipina accent, but pushed past simply being a one-dimensional stereotype, as she recounts the horrific experiences her character went through back home in Cebu and acts with genuine emotion, using her natural onstage presence to leave an unforgettable impression on us. Frances also displays a complete devotion to Fanny Kee as Leslie’s mother Margaret, and the two actresses shared an impossible to fake onstage chemistry, winning us over from the very moment the two began watching Mediacorp dramas together, discussing character motivations and attractive actors. Similar to Frances, perhaps in a role that was perfectly on the nose for him this year, Shrey Bhargava plays what could have simply been a typical Bangladeshi construction worker. But beyond the accent, he brings out a new dimension to his character as he portrays not a stereotype but a man with hopes and dreams, shattering the industry standard of foreigners played solely for laughs.

Despite only speaking in her third appearance onstage, Victoria Mintey was given some of the best, most poetic lines in Dragonflies, as she appears to Adrian Pang’s Leslie as a source of comfort and as a guide, reminiscing about better days and giving off a ghostly, ethereal vibe with her sagely wisdom, and it’s easy to see why the two characters were once happy together. Tan Kheng Hua is a force to be reckoned with as Leslie’s sister, a working woman armed with a tough, no-nonsense persona and a racism that though grating, is perfectly relatable. On the other hand, Adrian Pang’s portrayal of a broken man attempting to valiantly hold it all together is remarkable, and he makes Leslie a likeable, if somewhat hapless father and son, a victim of the ebb and flow of a tumultuous world. Despite their characters’ differences, towards the end of the play, Kheng Hua and Adrian came together to deliver the emotional climax: Kheng Hua shedding her character’s tough persona to reveal a deep vulnerability, and Adrian left a wreck of the easygoing father he once was, creating a sobering, crushing moment that left the audience silent, reeling from the pain portrayed onstage.

Kwok Wai Yin’s set design, while mostly simple and minimalist, manages to impress in the opening funeral scene, with actual water raining down from the ceiling to fall on the funeral attendees, providing a real sense of place and quite literally dampening the mood, further supported by Jing Ng’s sombre sound design assisted by Andrew Marko’s vocals bringing out the sadness and regret in the music. Later on, a bale of tile-patterned cloth first seen hanging from the ceiling at the start of the play reappears at the end, as characters spread it out to become a giant makeshift teepee, transforming from an ominous set piece to one of comfort and shelter to represent the shift in mood from threatening to hopeful.

Dragonflies takes its name from the concept of how the insect of the same name migrates halfway across the world to search for brighter prospects and greener pastures. But as we watch Leslie’s family crumble from one tragedy after another, it feels anything but a happy change. Yet, at the end, Dragonflies manages to leave its audiences with a kind of cautious optimism, as it invests its characters with the power to leave the world a better place than when they first found it. Dragonflies is a compelling, feel good play that makes us believe that even in the face of unrelenting difficulty, there’s always a way out that will leave us not with despair but with hope. With a successful second original script on their hands this year, we’re now hungrier than ever for more original productions from Pangdemonium, who undoubtedly cement themselves as one of Singapore’s best theatre companies.

Dragonflies will be performed primarily in English at the Victoria Theatre from 24th – 26th August. Tickets available here

Dragonflies
When: Till 26th August, 8pm
Where: Victoria Theatre