SIFA 2017: And So You See… Our Honourable Blue Sky And Ever Enduring Sun… Can Only Be Consumed Slice By Slice… By Robyn Orlin (Review) 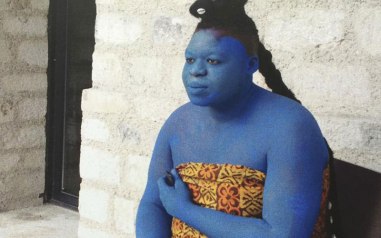 South African choreographer Robyn Orlin is known in her home country as ‘a permanent irritation’. The incredibly inventive Johannesburg-born artist has constantly pushed boundaries and bent genres in her multimedia dance work, often favourably compared to the idea of ‘photo collages’, or colourful visual masterpieces that carefully and certainly uniquely address some of the most difficult and complex issues that surround her country’s history and politics.

In her latest work And So You See…, making its Asian-Pacific premiere as part of SIFA 2017, Orlin returns to familiar ground and tackles the many questions of identity that arise in the wake of post-apartheid South Africa. Even when unbound from the more visible shackles of institutionalized discrimination, a new kind of challenge emerges when South African youths of today are given supposed limitless freedom to discover their own sense of self. Yet, when they are held back by stubborn views of others, how does one resolve the perceived paradoxes of simultaneously being a man of the world yet quintessentially South African, gay yet traditional, a university graduate yet a practitioner of traditional medicine, rather than being able to be accepted as a new, hybrid that can be both? 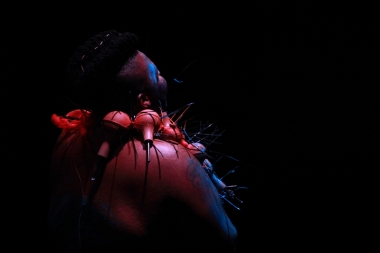 Embodying all these themes and labels is none other than Albert Ibokwe Khoza, a South African herbalist and new generation performer who seeks to bust those false paradoxes with his very existence and unerring confidence in bringing Orlin’s work to life. Khoza is a living, breathing work of art, a ball of limitless energy as he undergoes countless transformations onstage, with the help of visual projections and unexpected props and costumes from Marianne Fassler.

Going on a journey to portray a ‘requiem for humanity’, Khoza begins the show mummified, swathed in bales of cloth and a thick cocoon of clear cellophane wrapped tight around his body and face. Awakened, he begins to perform a number of movements inspired by the seven deadly sins set to a choral, classical piece of music, a literal requiem as he picks up a cowbell and becomes an animal baaing, grinds against his throne, moaning as he swishes a colourful whip that cuts the air with an audible slash before he picks up a bowl of oranges, seductively licking his lips and consuming each individual slice with gusto, adding an air of sex and violence as he indulges completely in the taste, while he thrusts a kitchen knife into his mouth, laughing maniacally as he licks the knife and stabs at the remaining oranges brutally, their juice dripping down his body and filling the theatre with a distinct citrus scent. 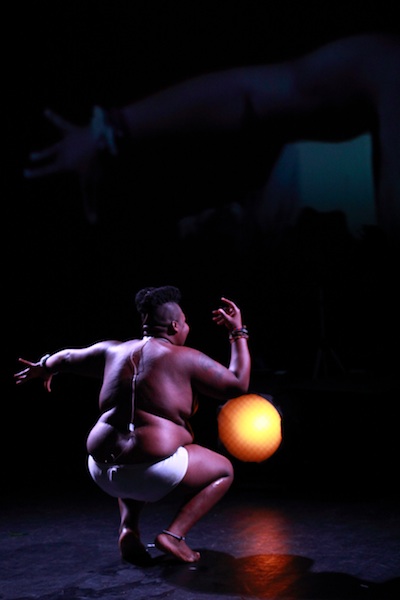 As much as there is an immense joy and playfulness that characterises the work, so too is there an air of discomfort that marks each movement. Nowhere is this more evident from when Khoza emerges sweating from his cellophane cocoon, and in his newfound physical freedom, commands complete control over the stage. Khoza points out and selects members of the audience, calling them out and demanding for them to clean him as he sprays himself with water, treating them as loyal servants as he places his legs on their shoulders, commanding them to clean his inner thighs and his immaculately manicured nails. Even if it’s gross and outrageous, there’s an ease to his performance and persona that keeps audience members giggling, a want to get to know this strange African man who dares order paying audience members around in a foreign country, a genuine likability that puts us on his side, the side of fun, primal urge and relishing in every word, every gesture that comes from him.

Khoza effectively indulges in the grotesque, the vulgar and the camp while revelling in the beauty of abundance, his large body a temple and place of worship as he manages to rise above the audience, transforming into a Nubian Queen as he paints his face and ascends to the status of a god, yet always retaining that sense of exuberant, exaggerated cheek. Preparing for a ‘very special date’, he shows off his extensive collection of rings, adorned with precious stones and the weight of history, as he comments ‘you jealous me’, transforming the phrase into a chant that becomes a rhythmic track for yet another series of movements as he poses and struts across the stage, body jiggling but always steady on his feet, sometimes breaking into a cartwheel, others simply holding a ballet position.

Much of Khoza’s performance is supported by stage manager Thabo Pule’s camerawork, as he zooms in on Khoza’s expressive face and displays it on screen, focusing on individual parts of his body where necessary to add emphasis, and imbuing the performance with an air of the cinematic and theatrical. We’re almost privy to Khoza’s inner thoughts as the camera takes on a life of its own, depicting Khoza staring up at it and pointing an accusing finger at something or someone hidden away from sight, a phantom in the shadows constantly putting him down, while also capturing a fierceness and determination to Khoza in his eyes when we see them up close and displayed on a screen behind him.

Ultimately, Khoza emerges as a force of nature, a many-faced god who makes a stunning metamorphosis from bound nobody to a clear-headed, completely confident and self-assured man, a symbol of hope for the new generation that you truly can be anything and anyone you want to be even in the face of dissent. Always delightfully eccentric, always assured, deliberate in his movements and committed to his gestures, And So You See… is one of the biggest dark horse hits at this year’s SIFA and one of our favourites, with unforgettable visuals and a strong message of hope in its defiant cry of fierce individuality from its one immensely talented performer. If this is the face of the modern artist in South Africa, you can be damn sure that our eyes will be on the look out for more of the same invigorating work to come.

And So You See… plays at the SOTA Studio Theatre till 9th September. Tickets available from SISTIC

And So You See… Our Honourable Blue Sky And Ever Enduring Sun… Can Only Be Consumed Slice By Slice…
When: Till 9th September, 8pm
Where: SOTA Studio Theatre