If you think there’s nothing to look forward to but retirement and CPF after becoming a senior citizen, think again, as Sing’theatre presents their 10th anniversary production this October – an all new, localized version of Erik Gedeon’s Forever Young.

The jukebox musical has gained cult status in several European countries, and is described by Gedeon himself as a form of “song drama”, where appropriately chosen pop songs drive the plot forward and gain new meaning through their delivery from characters in the show. Sing’theatre’s version of Forever Young is adapted by Benjamin “Mr Miyagi” Lee, and is set 50 years in the future in an nursing home, where six former stars of the local theatre scene are now wizened old folks with various medical complications, spending the remainder of their years taken care of by Sister Sara (Candice De Rozario) and reminiscing about their halcyon days during the prime of their youth.

When Sister Sara goes away, the elderly come out to play, and the nursing home becomes a stage for them to act out the memories of their better years. Much of Forever Young is farcical in nature, with plenty of sidesplitting scenes and laugh out loud moments. While playing a melodica to back up Adam, Adrian purposely goes off key (no less than five times), sending Adam into a flying rage, and the two old men engage in a hilarious fist fight, leading to an ensuing slow motion battle. 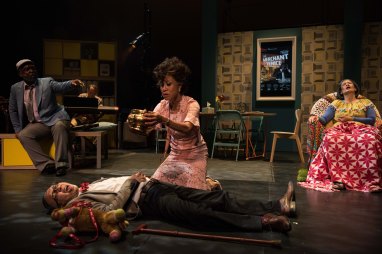 But amidst the pratfalls and comedic turns belies a keen sense of friendship that lives on amongst these decrepit divas – Adam, and as the theatre waited with bated breath to see the anger erupt from the cantankerous lady, it never came, giving way to a moment for the audience to laugh. Adam himself takes a fall off the stage after losing grip on his walking frame, and the men of the nursing home rush to help him get back on his feet again. At its heart, Forever Young makes subtle commentary on the nature of the theatre industry, where beyond professional disagreements and difficulties in working together, friendships remain king, and of utmost importance to help ensure that such small matters do not ultimately end up causing grief and bearing grudges; after all, the show must go on.

Hossan Leong’s direction was incredibly well paced, with well timed and appropriately chosen songs at just the right moments, while Elaine Chan, as always, does a spectacular job of directing music, arranging songs to suit each and every level of singer in the cast, some of whom are not professionally trained. Kheng Hua, for instance, isn’t a ‘natural singer’, and finds it difficult to hit higher and lower notes , yet made her rendition of Eurhythmics’ ‘Sweet Dreams (Are Made of This)’ work beautifully.

Each and every member of the cast holds their own, equipped with endless energy far beyond a typical nonagenarian, and resulting in fun numbers we found ourselves easily singing along to. Suhaimi Yusof performed a cover of Mark Ronson’s ‘Uptown Funk’, lighting up the stage and sweeping the audience off their feet with his smooth dance moves, while the toy dog toting Hossan Leong, in singing Justin Timberlake’s ‘Can’t Stop The Feeling’, was so enthused that the numbers on the digital clock hanging from the ceiling started going haywire, as if the performance itself was reinvigorating the cast with new life and turning back time. Seasoned actress Karen Tan not only did a great cover of Joan Jett’s ‘I Love Rock and Roll’ and The Weeknd’s ‘Can’t Feel My Face’, but also never broke character once, even incorporating the typical hand tremors one sees so often in the elderly into her performance. Even Candice De Rozario as the no-nonsense nurse Sister Sara got her turn in the limelight, unleashing her inner songbird and performing a stellar opera number. However, the star of the night was undoubtedly Ebi Shankara. Ebi was one of the younger members of the cast, yet showed his range and flexibility in truly ageing himself up and bringing across both the physicality of a much older man and ineffable charm. At one point, he begins playfully stripping, harkening back to his wilder days of yore, and also sings an emotionally charged performance of The Doors’ ‘Light My Fire’.

Wong Chee Wai’s set is simply furnished, with familiar looking furniture you might find in any household, and of course, plenty of chairs and comfy couches for the elderly characters to seat themselves. The walls are adorned with a digital frame, where posters of ‘past productions’ which the cast have starred in play in a slideshow, from Forbidden City to Crazy Christmas, a reminder of the stars’ past glories, while a digital clock hangs from the ceiling, the numbers ticking away relentlessly. The illusion of an actual nursing home is helped by the incredibly realistic makeup, where wrinkles and sagging skin adorned the cast’s faces; dramatic yet believable, while Ashley Lim provided grey wigs so real you could swear they were natural for that final touch of theatre magic. 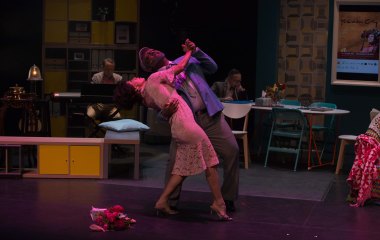 As the show drew to a close, the entire cast performed a rendition of Alphaville’s ‘Forever Young’. Cheesy as it sounds, the song really struck a chord with the audience as we sat and reflected on the nature of the lyrics sung in this context, and the cast repeated the lyrics ‘do you really wanna live forever?’ several times, lamenting our shared mortality, yet also somehow celebrating the fact that no matter how old we get, we’ll still be able to find that inner youth inside somehow. Even when the last performer has returned to their room to sleep, bidding the other goodbye and not knowing if they’ll truly live to see the next day, they can take comfort in the fact that in spite of age, they’ve lived long and fulfilling lives as artists; perhaps, that in itself is the key to staying ‘forever young’.

As the cast took their last bows, the audience exited the theatre still snapping their fingers and humming the familiar tunes from the show, testament to the amount of heart and fun this production possesses. Forever Young proves that old is still gold with a flawless cast and unforgettable performances of infectious, toe tapping numbers from start to finish.