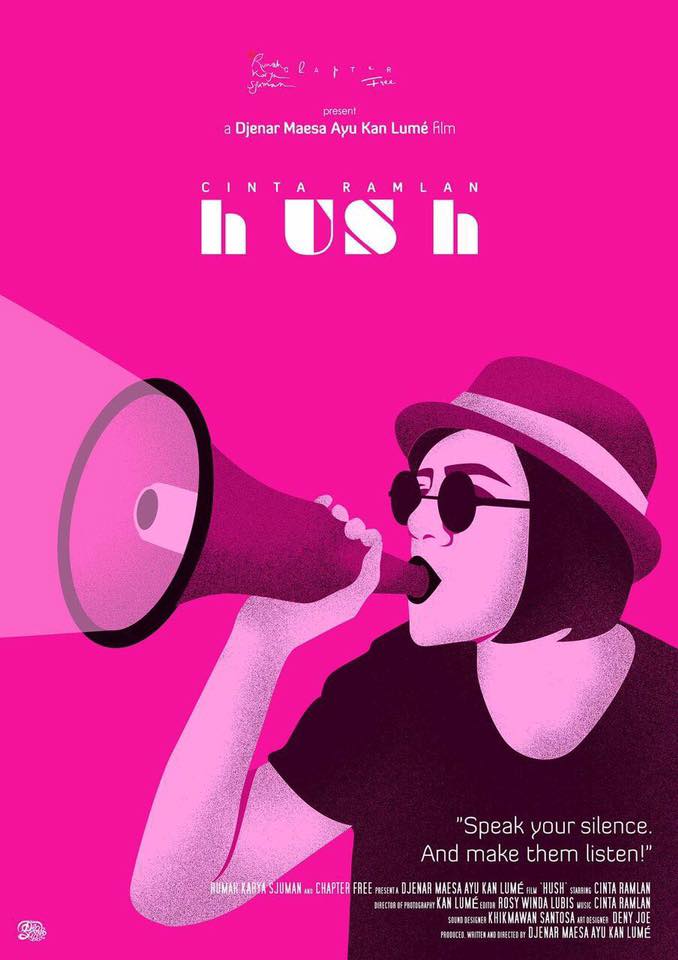 At this year’s Singapore International Film Festival, Kan will be presenting his latest film hUSh, created in collaboration with Djenar Maesa Ayu. The ‘mockumentary’ follows aspiring Balinese singer Cinta (Cinta Ramlan, in a fictitious version of herself) as she moves to Jakarta in search of success. But city life can be tough, and saddled with an insincere boyfriend, superficial friendships and empty materialism and sexual encounters, she decides to head home to Bali to seek refuge for her aching heart.

Candid and spirited, hUSh is set to be a poignant look at modern femininity through the the eyes of a strong, independent woman. We spoke to Kan himself about the process of creating the film, the allure of the documentary format, and the future of film. Read the interview in full below:

Bakchormeeboy: How did you and Djenar first come across Cinta and decide to make hUSh?

Kan Lumé: I met Cinta through my co-producer-writer-director Djenar Maesa Ayu. They became friends via a past collaboration and they both share similar values in their respective works. Cinta is a musician and Djenar, an author and filmmaker. Both of them paint vivid portraits of what it’s like living in contemporary society as a woman. Djenar watched my film The Naked DJ, and was inspired to do a similarly styled film with Cinta as the lead. We decided to make use of Cinta’s life of a musician as the backdrop and interweave a fictitious plot about a wild, promiscuous girl who ultimately has a tragic past she has hidden.

Bakchormeeboy: What is it about the documentary form that makes it so alluring?

Kan Lumé: Djenar wanted to paint an intimate portrait of a survivor of sexual abuse. Yet, we also wanted the tone of the film to be as far removed from victimhood as possible. Therefore we created the character and scripted most of the lines. hUSh is about a survivor thriving in spite of abuse. It was never about documenting a real story of abuse. Such documentaries already exist and are relatively common – the story of a victim who must slowly learn to put their life back in order and climb of out the darkness, while hUSh instead takes a mockumentary approach.

We wanted the character to arrive on screen fully formed as a woman who takes charge of her life and celebrates it. She’s displaying many traits that survivors of sexual abuse have. She’s a strong woman hiding an innermost core, and as the perpetual gaze of the camera remains firmly on her, it slowly breaks down her defenses. We wanted to orchestrate the audience’s response towards her – shock at the beginning, and then stretch it beyond what most normal audiences can bear. And hopefully, offer a paradigm shift by the time the film ends.

Bakchormeeboy: What has been the greatest challenge and takeaway for you respectively in the process of creating hUSh?

Kan Lumé: My challenge as always was not caring what people thought. Our script mentions all kinds of sexual taboos, from affairs to threesomes and everything in between. Djenar has dealt with similar content throughout her career, so it wasn’t particularly tough for her, but Cinta had to pretend to be that wild, damaged girl and I wondered if she would embrace the role. We discussed with her from the beginning our intention of mixing fiction with her life and that she’d have to say things like, “I want to f**k a black guy”. Cinta knew her character would be an object of scorn, but it turned out, I had nothing to worry about. She trusted us as directors and was bravely on board from the very beginning. The greatest takeaway for me was the sheer joy in the entire production of the film. It was a pleasure from conception to birth.

Bakchormeeboy: With both hUSh and The Naked DJ (featuring X’Ho), you seem to be developing a pattern of creating films based on free spirited individuals. But where in The Naked DJ, you featured a man in a foreign country, here, you’re featuring a woman returning home. How different was the process in the creation of both films?

Kan Lumé: Both films have very similar processes. The thing that was different was me. When I was making The Naked DJ, I wanted to escape the confines of my country and the social constructs and expectations on me. When I made hUSh, I felt like I had finally arrived home. Thus, Cinta finds comfort in the oddity of her family. There is no one size fits all when it comes to human behaviour. What works for one will not work for another. The beauty of this process of creating a film is that it allows for the intuitive to find its way into the content of the film.

Bakchormeeboy: Indie/arthouse cinema can be difficult to catch in Singapore, often with limited or even single screenings, especially for local films. Should this be the case, or do you hope that our local arthouse films will be able to see wider and longer cinematic releases in future?

Kan Lumé: It’s all inevitable, and old-timers who fight the digital revolution and say that it is destroying films will be slowly phased out. It’s simply history reinventing itself through familiar cycles. 40 years after the inception of cinema, sound came along. 40 years after that, colour came along. Like clockwork, 40 years later, digital came and changed things once again. We need to stay with the developments, even if we don’t understand it.

Sooner or later, if we are still excited, still hungry and eager, the new medium’s secrets will be revealed to us. We just need to be patient. I identify more as a content creator. I am still excited with telling a story with my own unique soul. I hope that on the side of the distributors and exhibitors, there will be similarly progressive minded and enthusiastic individuals who can find worth in what I create. If there is a meeting of minds, good timing, and chemistry, magic can happen.

hUSh plays on Monday, 27th November at 9.30pm at the National Museum of Singapore. Tickets available from the SGIFF website

0 comments on “Artist Spotlight: An Interview with Kan Lumé, Co-director of hUSh (SGIFF 2017)”