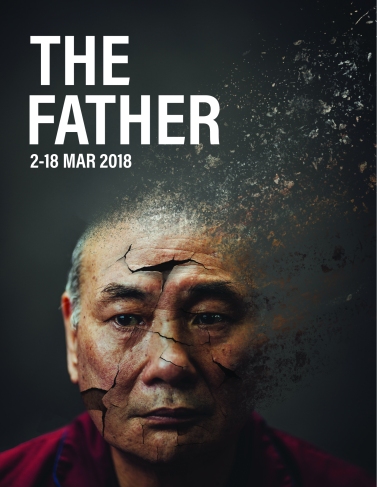 Multiple-Life Theatre Award 2018 nominee Pangdemonium springs into their 2018 season with one of their most socially relevant plays yet – Florian Zeller’s The Father. Receiving critical acclaimed when it premiered on London’s West End, The Father stars Lim Kay Siu as Andre, a man who’s fallen prey to dementia and becomes increasingly unsure of the very fabric of reality and the world he lives in.

Prior to its Singaporean premiere next week, we spoke to cast members Lim Kay Siu and Keagan Kang. Veteran actor Kay Siu needs no introduction as the play’s eponymous father, while Keagan was last seen onstage nearly 6 years ago and has been hard at work both in front and behind the camera. We asked them about their roles in The Father, and just what is it that makes it a must watch show this season. Read the interviews in full below:

Bakchormeeboy: With a title like ‘The Father’, pretty much the entire show hinges on your performance as the central character. Do you ever get performance anxiety, and what is your way of getting over it?

Kay Siu: It’s a dream role. I’m very fortunate to get to try to do this. It’s been a journey of discovery. It’s not been easy so I’ve had to force myself to be patient. And not entertain the anxiety.

Bakchormeeboy: As a theatre veteran, you’re no stranger to playing ‘old man’ type characters. What makes Andre so different from the other roles you’ve played before, and what was your biggest takeaway in the rehearsal process?

Kay Siu: This play shows things from Andre’s point of view. And that’s rare. Usually we see it from the caregiver’s point of view. So it’s very refreshing. The biggest takeaway for me is trusting the script and learning not to overact.

Bakchormeeboy: Do you personally know anyone who suffers from dementia? How did this help to inform the way you decide to play Andre?

Kay Siu: Yes, my uncle and two parents of friends have dementia. Each case is very different. Observing the acceptance and rejection and fear of dementia has really helped me gain insight into this play.

Bakchormeeboy: What do you think is the most terrifying thing about growing old, and how can we prevent that from happening or at least, find a source of comfort?

Kay Siu: I used to want to grow old with Swee Lin, but we both are realizing that old age is really no fun. I think calling it the golden years is a real distorting euphemism. Old age is hard. I just try to make the best of life.

Bakchormeeboy: Why should audiences come and watch The Father?

Kay Siu: it’s a very enlightening play, not just about dementia or old age, but about family relationships and the difference between responsibility and love. And acceptance.

Bakchormeeboy: It’s been a while since we last saw you onstage! What have you been busy with, and what made you decide to return with The Father?

Keagan: The last thing I did on stage was as Sebastian in Twelfth Night for SRT’s Shakespeare in the Park and since then my focus has been on film, and TV. I’ve recently finished filming the fourth season of Code of Law which will air in April. And I’ve just made my directorial debut in an original short film that I also wrote, co-produced, and acted in, called Lords.

Bakchormeeboy: Describe your character in The Father and his relationship with Andre/Kay Siu. What were some of the biggest challenges in preparing for your role in The Father? Or what were your biggest takeaways?

Keagan: I play a character called Man. He appears at distinct moments throughout the play where it’s up to the audience to interpret what his relationship really is to Andre with what unfolds on stage.

One of the biggest challenges was the emotional investment in preparing for the character. It was pretty tough listening to recounts of real-life stories by patients, their spouses, and their caretakers when we did our research as a company at the hospitals. And also with our own research with those affected in our own personal circles. It’s a condition that affects more people than we think and it’s extremely sad and heartbreaking.

It’s trying to be sensitive to the subject matter and giving it its due respect, but also being brutally real about the condition with the characters in the script who are at the receiving end of the illness.

Bakchormeeboy: The last time we saw you in a Pangdemonium production was way back in 2011, with both Closer and Dealer’s Choice. What was it like to return to working together with Tracie as a director?

Keagan: Exceptional. I was very excited and very nervous all at the same time. They are incredibly warm, inviting and hospitable, and a highly creative, artistic, and innovative group of people to be around with, alongside my fellow cast. They have so much integrity in what they do and it’s a real privilege being able to work with Pangdemonium again.

Bakchormeeboy: Do you have any plans to return to the stage more regularly in the coming years? Or is The Father going to be a one time theatre project?

Keagan: That all really depends on the scripts and roles that cross my path. Sometimes, a role chooses you without you realising it. I guess for me, it’s the connection I feel when reading a script and a character jumps out at me. When it makes me feel excited and I want to play the character to drive the narrative, but it also scares me because of the challenges that each new role brings.

Bakchormeeboy: Why should audiences come to watch The Father?

Keagan: It is a great story driven by wonderful characters and it also creates awareness for this debilitating illness of the mind. It will take audiences on a rollercoaster journey through laughter, tears, and a lot of confusion. They will leave the theatre not knowing what hit them but also with many questions and much food for thought.

0 comments on “Pangdemonium’s The Father: An Interview with Actors Lim Kay Siu and Keagan Kang”