Pooja Nansi and Jessica Bellamy delve into the history and personal significance of hip hop in a fun and insightful performance.

Before we begin, take a moment to think about your favourite hip-hop artist is. Is it Tupac with the deeply emotional and strangely prescient The 7 Day Theory? Could it be pre-Kardashian Kanye West making waves and pushing genre boundaries with 808s & Heartbreak? Or is it Nicki Minaj, rapping over her male brethren on Monster and immortalising phrases like ‘pink wig thick ass give ’em whiplash’?

Whichever one it is, put it on as you read this, and let their anger, expression and emotion flow right into your very soul, remembering your feelings when you first heard it, from the shock of the language to the freedom and strength it eventually represented.

Dressed in a colourful, baggy tee and a loud, floral windbreaker, Pooja Nansi and Jessica Bellamy know exactly what strange power these songs have over them, acting as a gateway drug to a lifetime of thick beats and hip hop. And to show their love for it, they’ve embarked on Thick Beats For Good Girls, looking back on their lives and celebrating everything it’s given them as young women growing up in conservative communities. Thick Beats is an intelligent show, taking on a form similar to academic discourse as both women take audiences on a journey through each of their lives while placing how hip hop has, for them, has been a force for change and empowerment, rousing in their cry for independent voice and rousing in its anger. 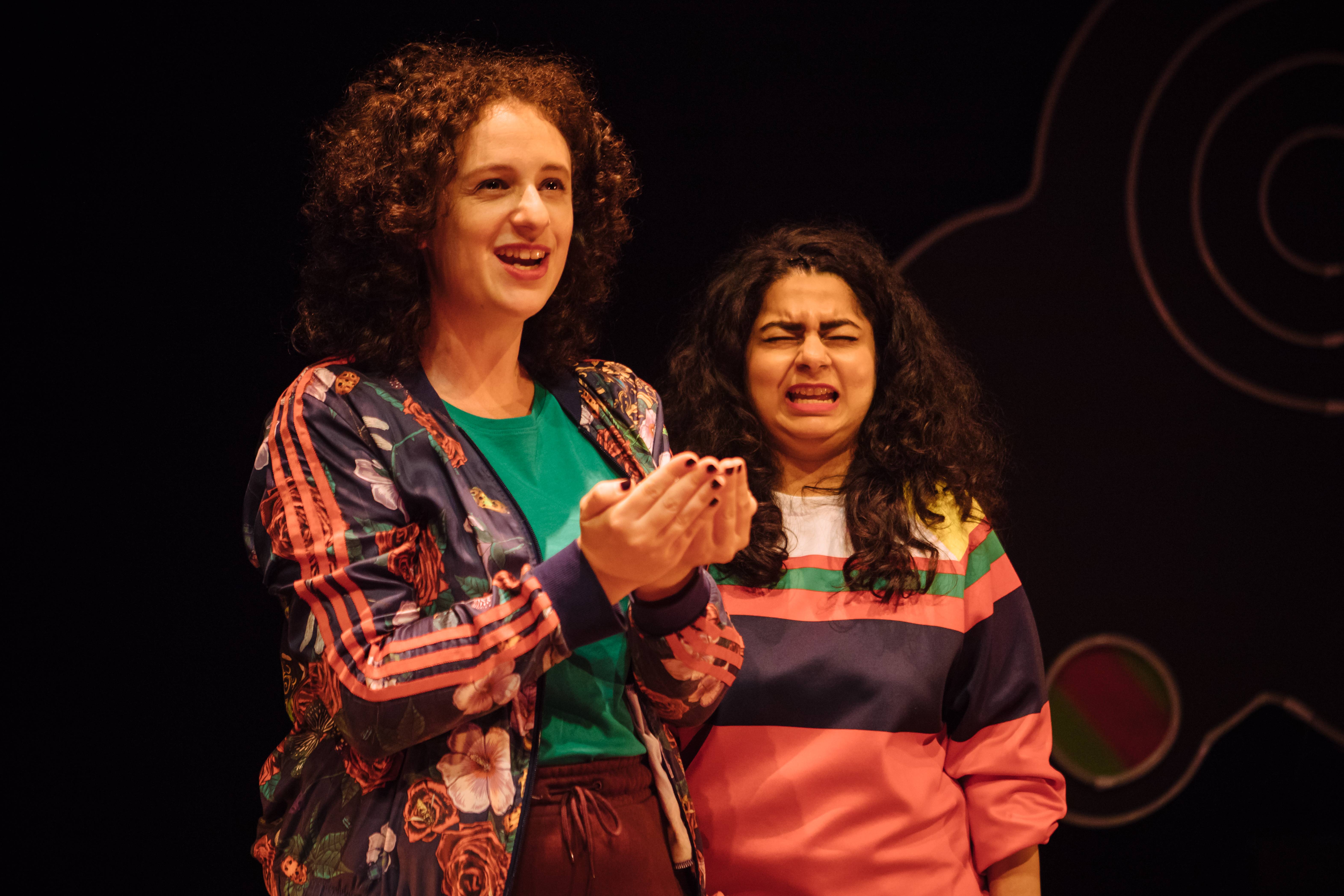 Confessional in their honesty as they recall moments in which hip hop has given them life at their lowest and verve against their communities, it’s obvious that these two women have embraced hip hop into their very soul as they elaborate on its history, and explain its application to their lives in spite of its often violent, misogynistic content. Khia’s ‘My Neck, My Back’ becomes a cry of sexual liberation, as Pooja and Jessica relish the explicitness of the lyrics ‘lick my pussy and my crack’, while on the flipside, ponder the space hip hop allows its artists to showcase vulnerability amidst anger, with Jay-Z’s regretful responses to Beyonce’s ‘Sorry’ on 4:44. All this discourse is helped in part by the by the psychedelic, upbeat mass of colourful circles and almost liquid set by Petrina Dawn Tan, transforming the black box into a trippy, mini-concert hall/lecture theatre that perfectly complements the girls’ upbeat and energetic approach to unpacking hip hop. 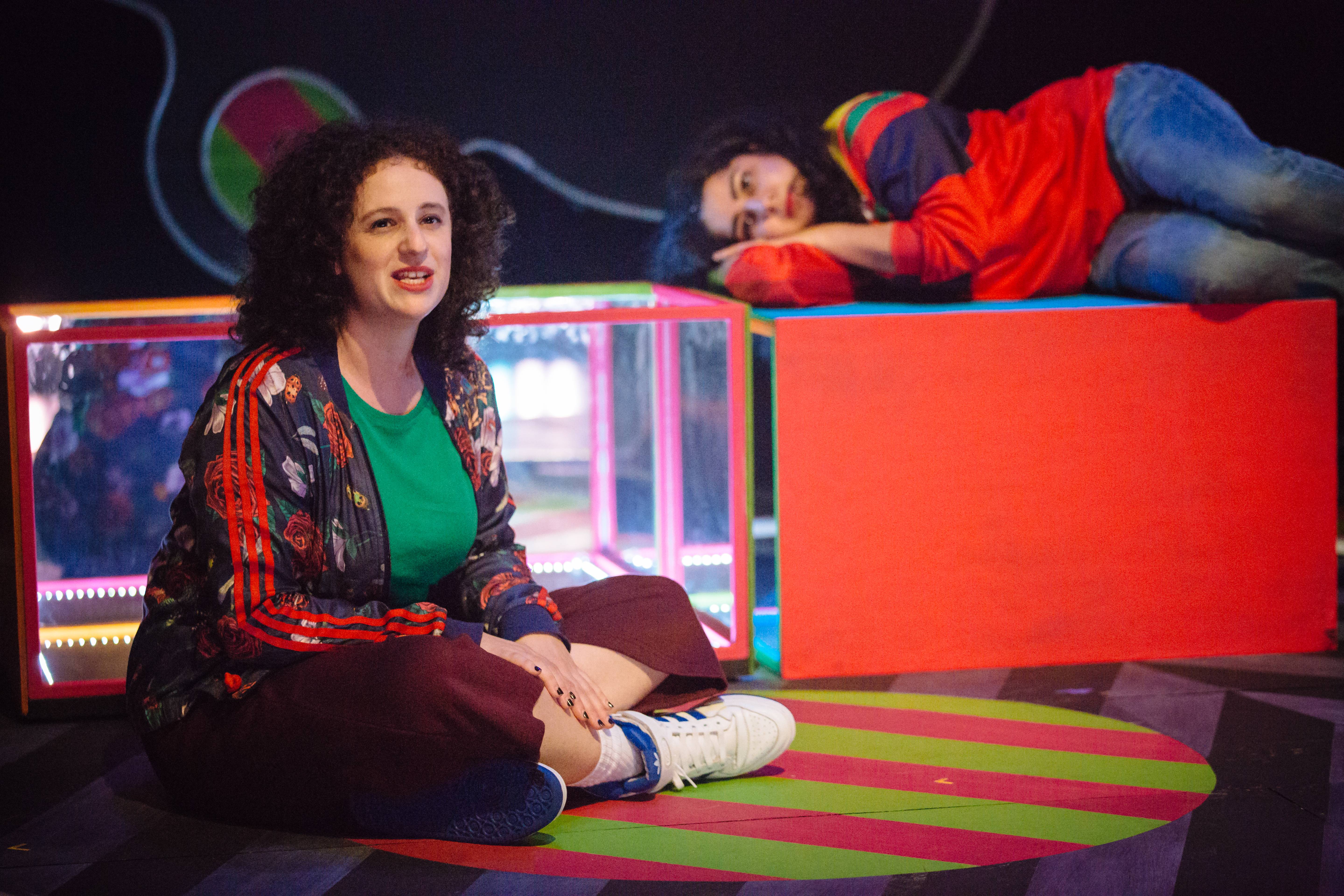 Thick Beats is a difficult play to truly connect to for anyone who’s never truly embraced hip hop growing up. But that’s never been the aim of the show, which one can still appreciate as a detailed look at the nitty gritty of all that hip hop espouses. It’s sufficiently smart enough to provide new insight for newbies to the scene, while personal enough to catch you unaware at times of just how much hip hop has acted as a lifebuoy for both women at times. Especially likeable are scenes which break the presentation format, such as when Pooja plays to her strengths and origins in performance poetry, demanding and deserving our attention with her spectacular vernacular as she takes to the stage solo with only her voice and facial expressions. 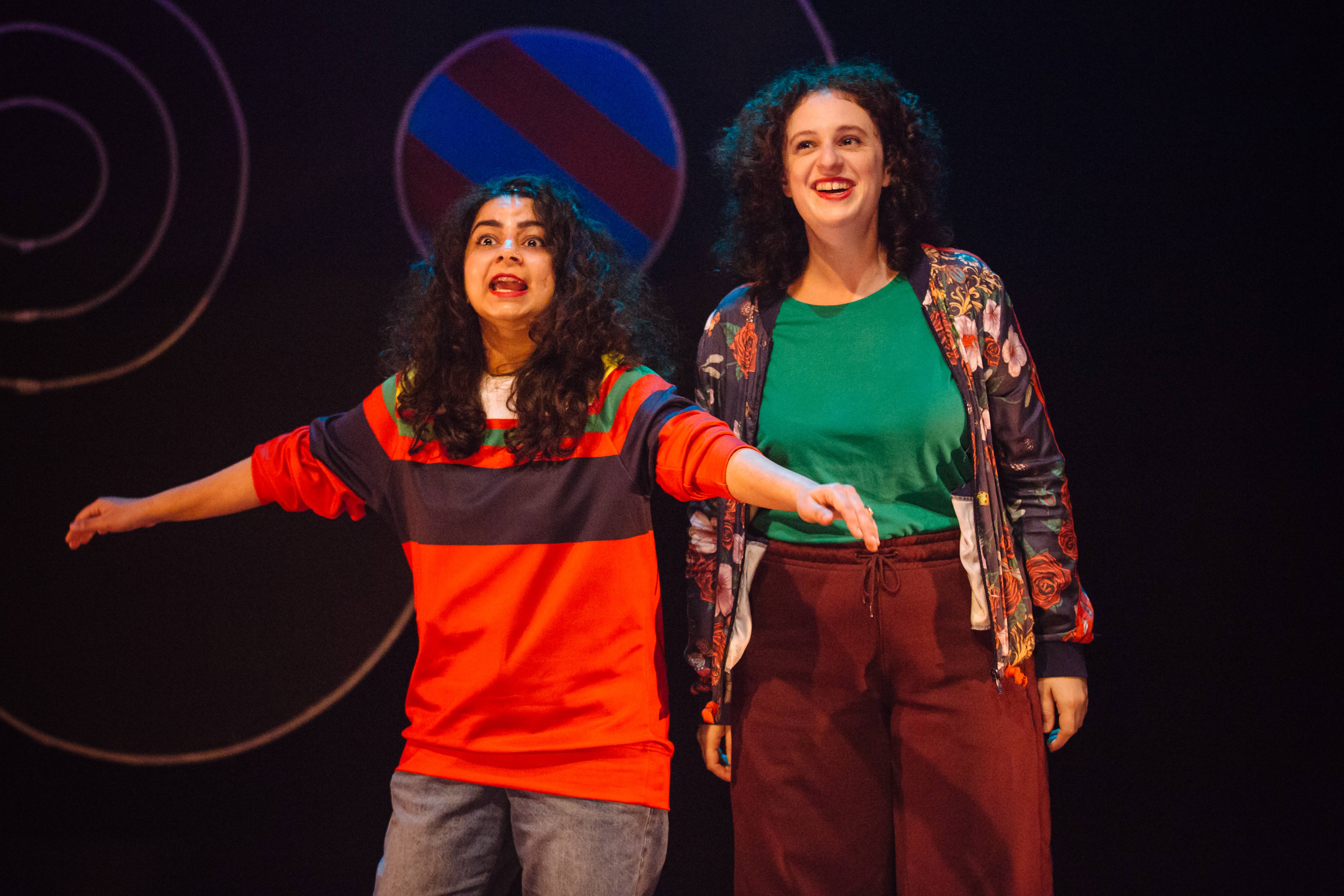 In its final scenes, Pooja considers the club scene in a small shop house floor on No. 10 Mohd Sultan Road in a monologue. She points out its spectrum of listeners – the first girls on the floor dancing like no one’s watching all the way to the clubbers who get down as a single unit when Sean Paul comes on, and how this shared experience, this intense power overflowing from each melody and rhyme brings these good girls (and boys) together. This canon of music comes together to form an anthem that we’re more than willing to partake in, and when the familiar opening tunes begin to play, you can be sure that we’ll all be dancing to the same thick beats.