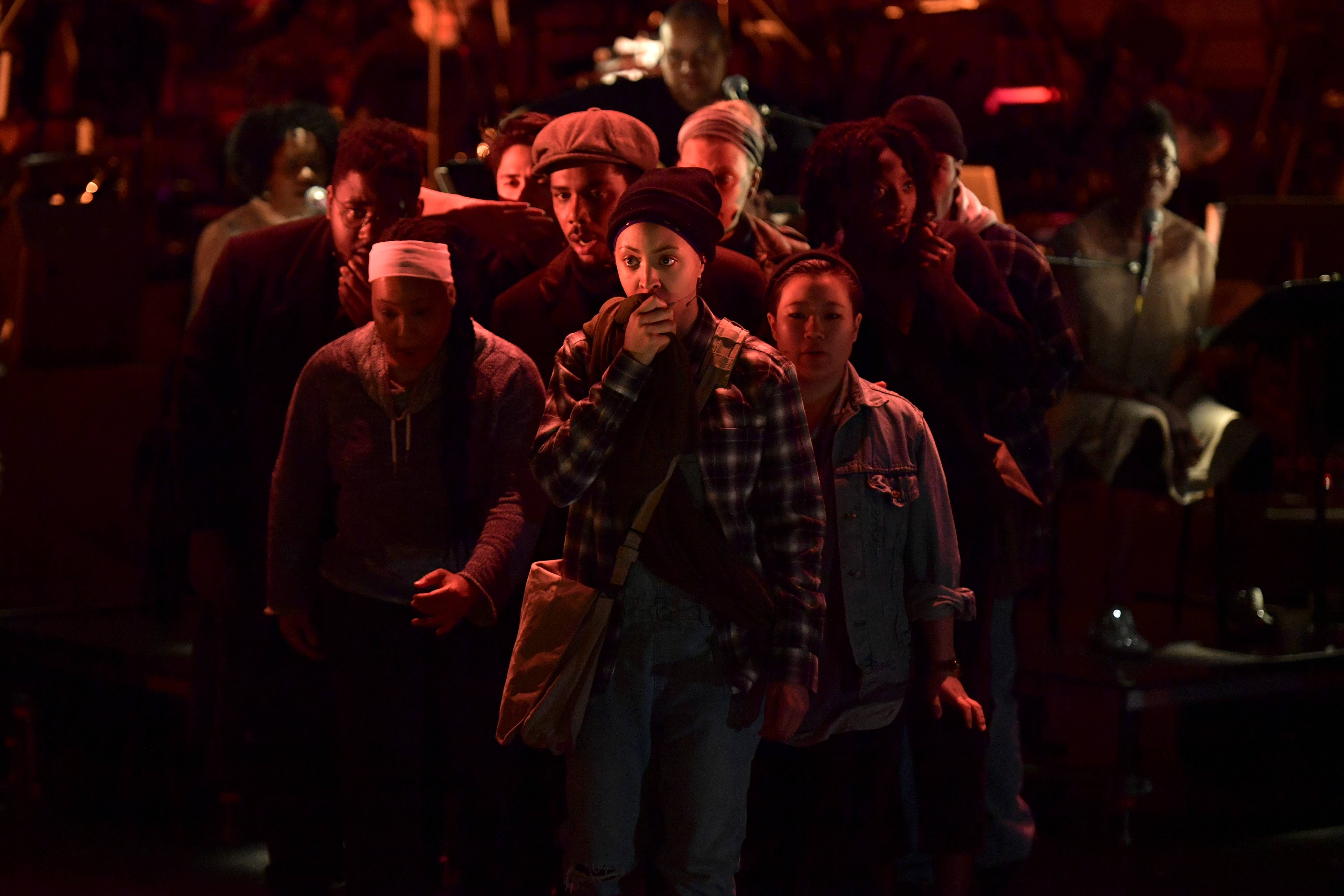 Afro-futurism is given a musical touch in a stirring work of speculative fiction.

Toshi and Bernice Johnson Reagon’s Parable of the Sower is a genre defying work that, if it were to be summed up, would simply be a powerful musical adaptation of one of the most seminal works of Afro-futurism.

Parable of the Sower was originally written as a novel by award-winning author Octavia E. Butler, and is set in 2024 where climate change has wreaked havoc upon the world, with violence and disaster all anyone has to look forward to anymore. Our story follows hyperempath Lauren Olamina (Shayna Small), a condition which allows her to feel the pain of those around her, as she lives out her days in a small gated community, counting down the days till their safety is over. When her father, a pastor and leader of the community, does not come home one day, the enclave is left bereft of a leader and becomes vulnerable both spiritually and physically, coming under attack a few days later. Lauren then flees, finding strength from her beliefs in becoming the change she wants to see in the world, and forging a new community of survivors as they look towards the stars to find a new haven to call home. 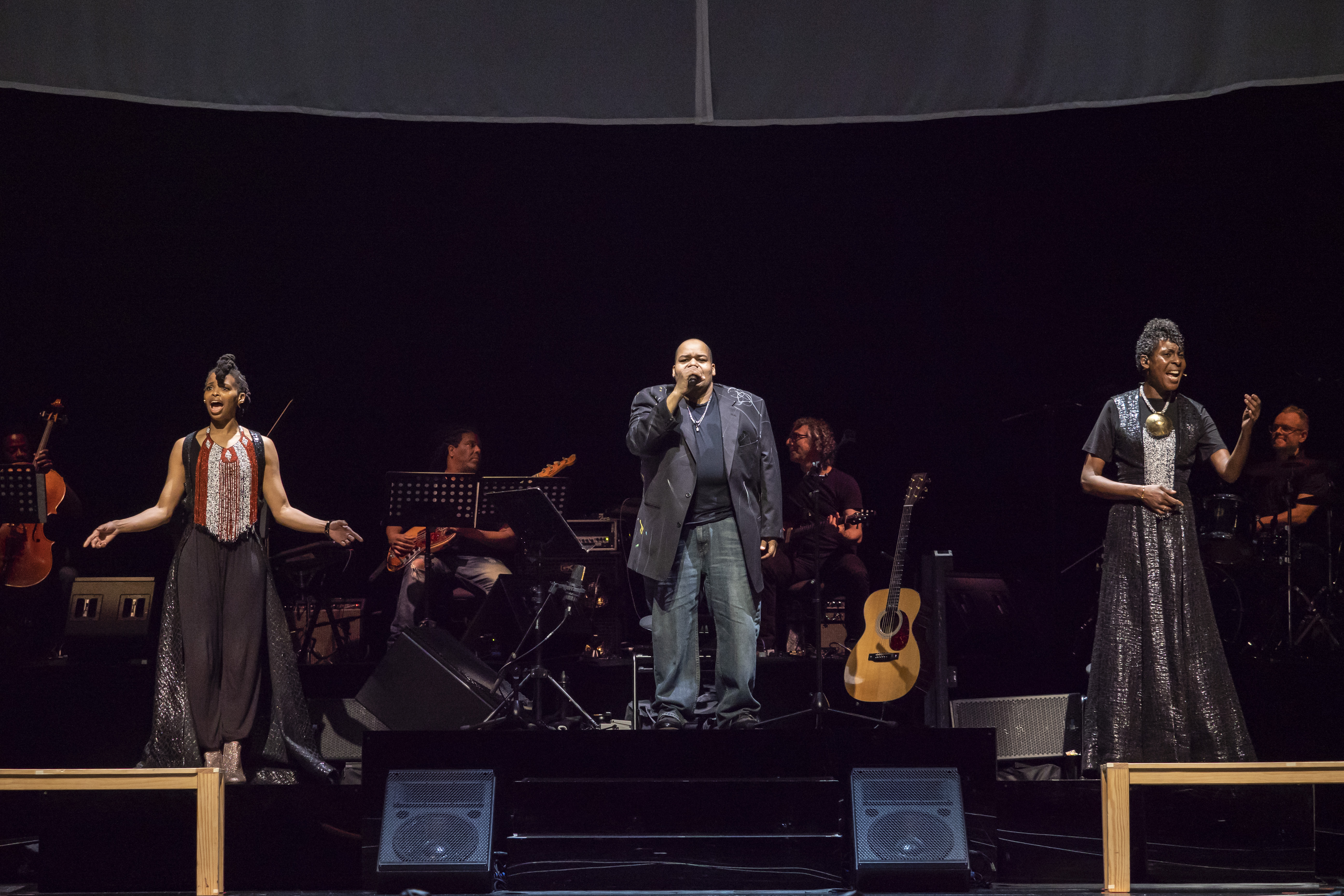 With libretto, music and lyrics written by dynamic mother-daughter duo Toshi and Bernice, themselves prominent members of the Afro-American music scene in America, Parable of the Sower becomes a rousing project that celebrates African-American culture in all its facets, and a modern parable for the times, a warning that if we do not care for the earth today, it might just disappear tomorrow. Throughout the performance, Toshi Reagon herself is onstage with fellow talents Helga Davis and Carla Duren, and performs both original music and songs from the canon of black music.

The stage setup is very aesthetically pleasing – while the narrative plays out in front, Toshi’s orchestra (Percussion – Bobby Burke, Bass – Fred Cash Jr, Cello – Malcolm Parson, Violin – Juliette Jones, Guitar and Keyboard – Adam Widoff) remains fully visible just behind the theatrical performers. The open set makes one feel immediately welcomed and ready to plunge into the world of Parable of the Sower, and the many elements seen onstage simultaneously come together to form a layered, multifaceted performance brimming with life and meaning. 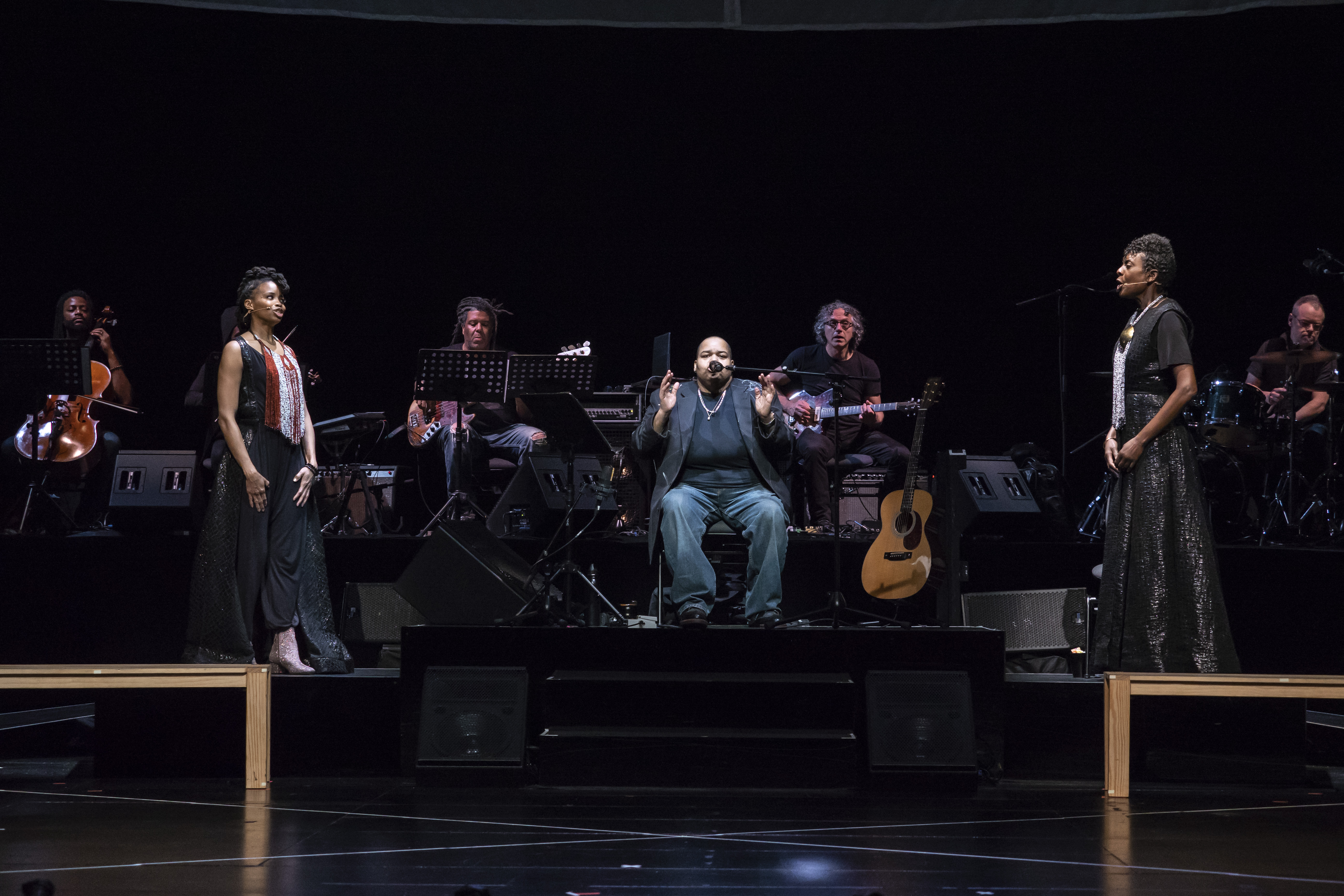 Songs are carefully chosen to fit each scene, each number fully bringing out the themes and powerful nuances of the imaginative and timely script, such as a song about issues and a folk song sung during the intermission, as Toshi herself gets up and has the entire audience join in, creating an intimate, personal bond with the show. In the instances where we are seated with the ‘congregation’ in Reverend Olamina’s church, one feels like a part of the performance itself with the intimacy and temporary safety afforded from the chapel-like setting of the space and gospel music, the entire cast singing as one chorus. One feels a spiritual joy stirring within us as we listen to the cast sing praise. At other times, in making reference to the cruel outside world and the state of decay it’s fallen into, songs become warnings and contain refrains of regret and fear, at once prescient and timeless, considering the long history of civil rights movements fighting against oppression, still ongoing even today. 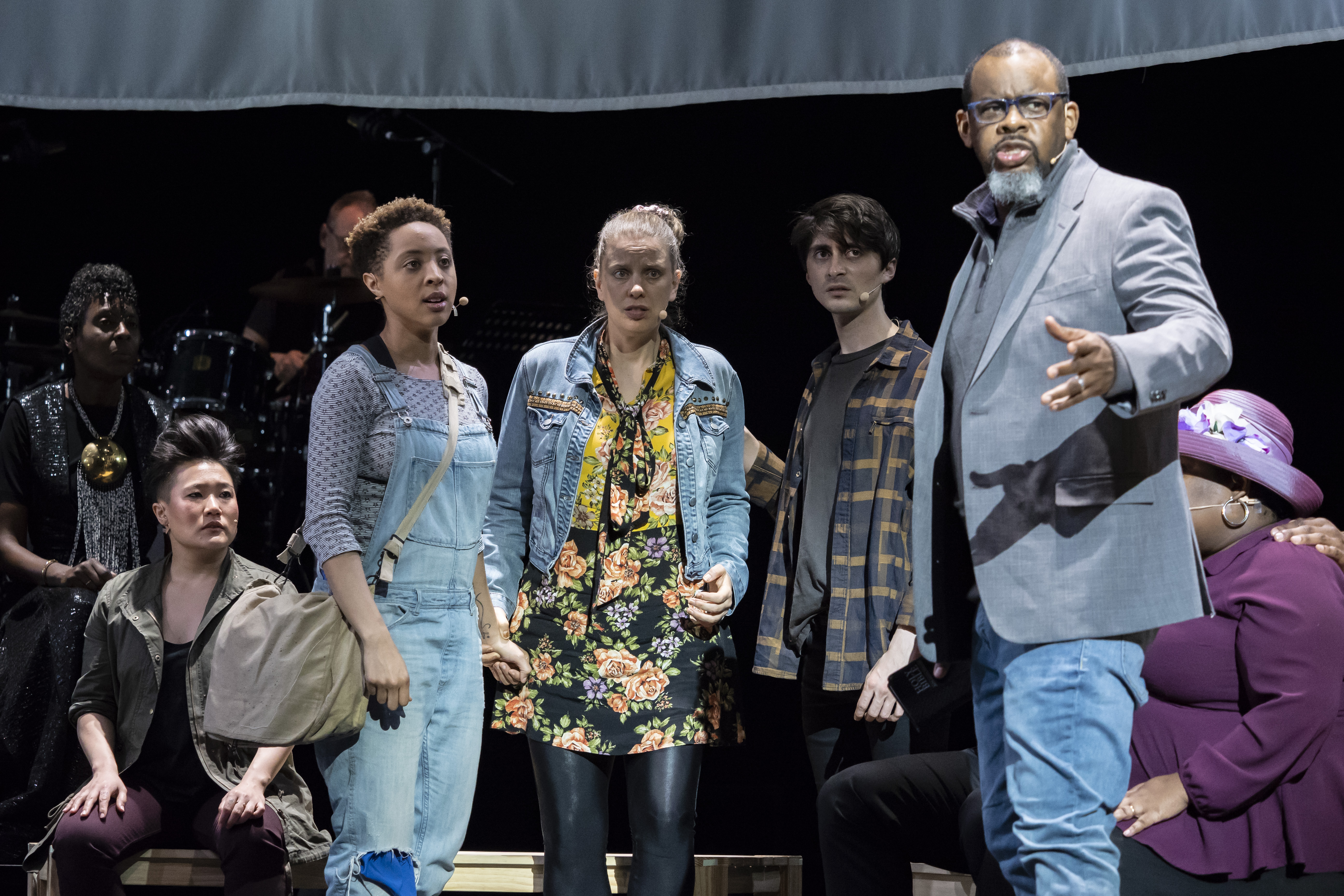 As protagonist Lauren, Shayna Small possesses a powerful voice, and in her moving rendition of Bernice Johnson Reagon’s “There’s a New World Coming”, she imbues the antiwar song with new meaning, infusing it with a bold hope and addresses instead the fictitious, yet very possible hostilities of Butler’s dystopian world. Curtiss Cook Jr, in playing Lauren’s brother Keith, brings a strong rebellious touch to his character, while Jason Charles Walker as Reverend Olamina feels authoritative and pastor-like in his portrayal, and his presence is easily felt as a beacon of hope amongst the cast of characters in a world of fear. 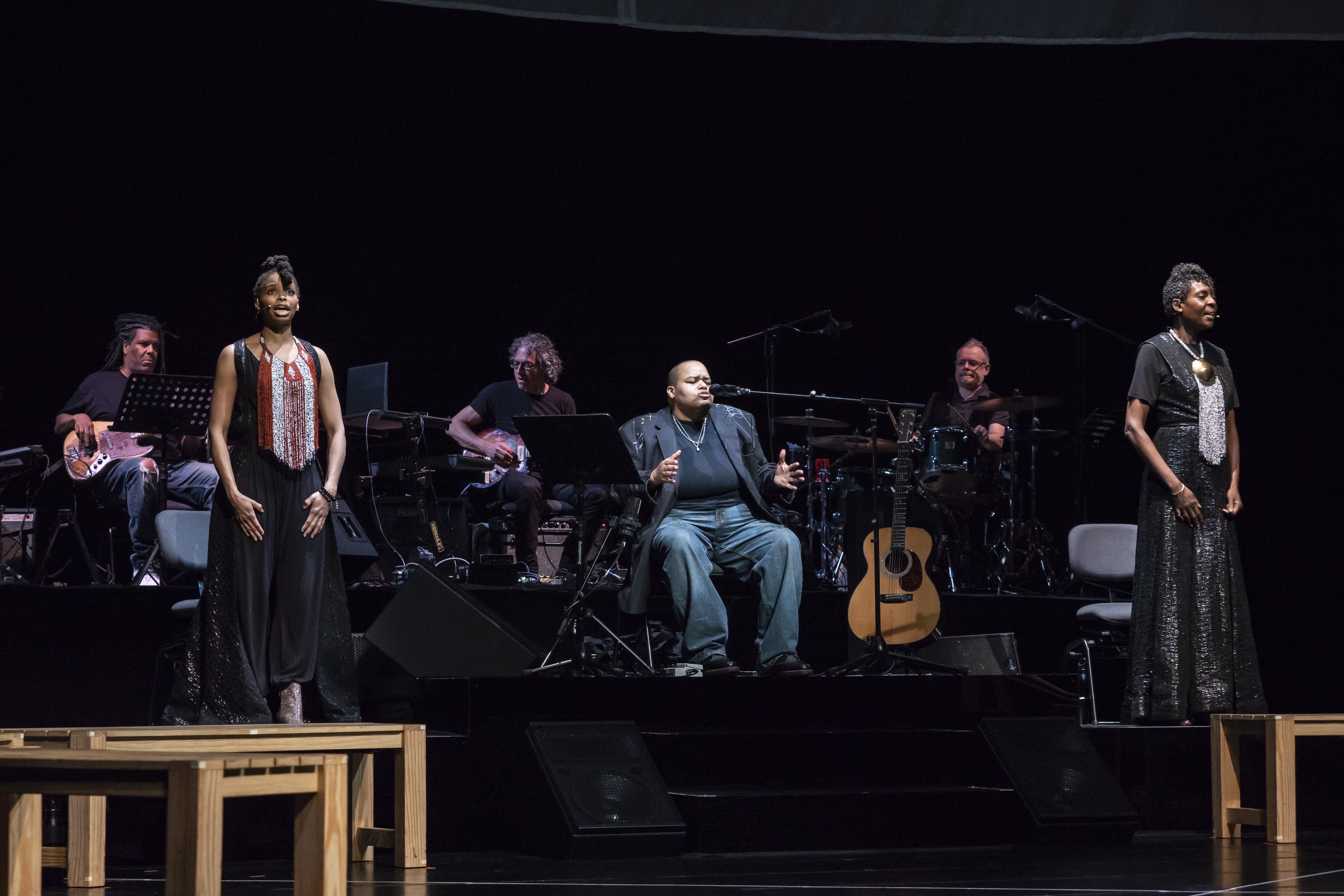 This communal setting eventually pays off spectacularly when the community comes under attack. Christopher Kuhl’s lighting is especially important for this scene, as a spotlight falls upon the audience as the lights go out, creating an immediate sense of terror, and is always present to accentuate each song’s inherent meaning through careful illumination of the performers and setting just the right mood each time. 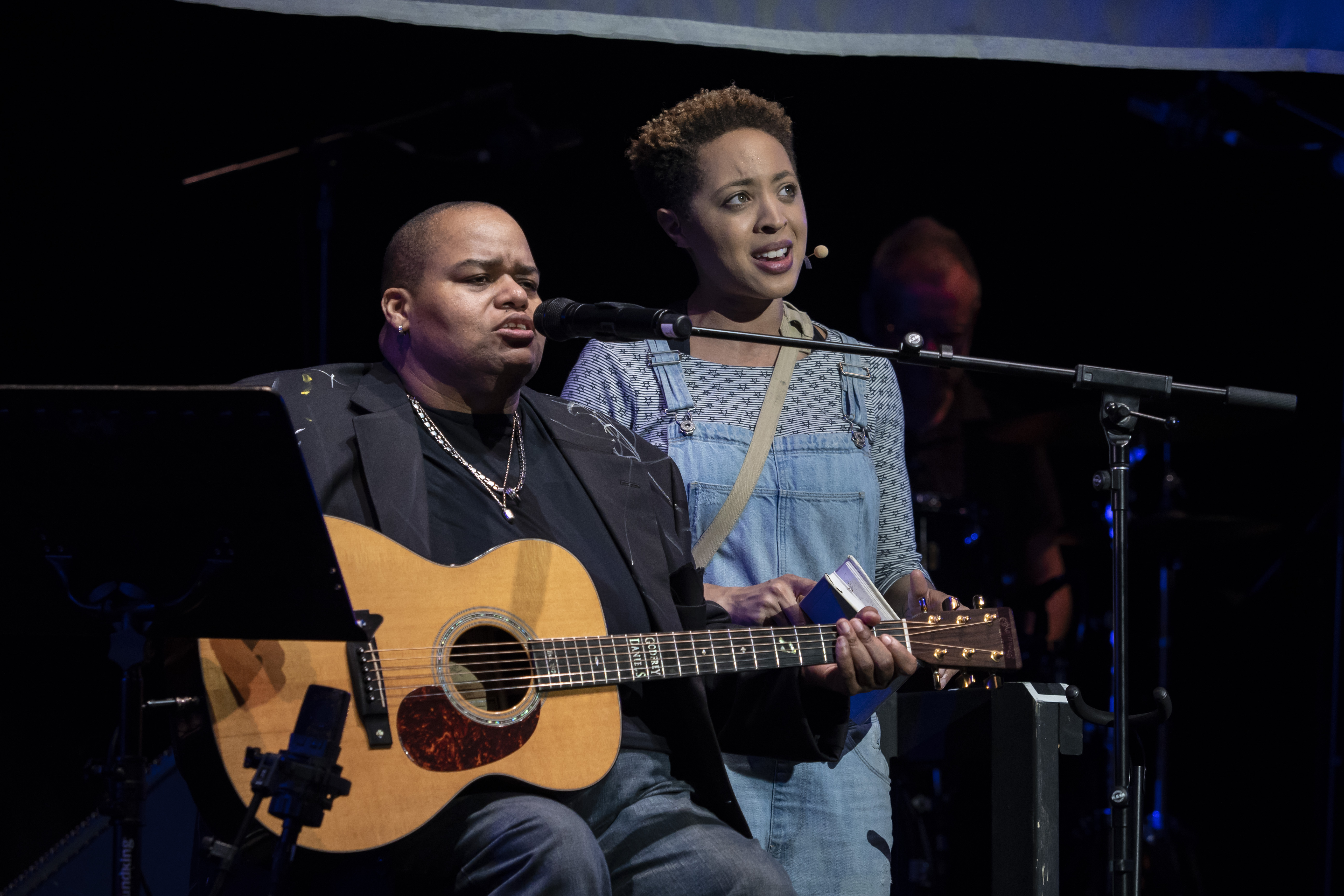 Ultimately, as Lauren and the ensemble sing the final hymn of the coming of God as a sign of change, and that change needs to happen, there’s renewed life amongst all the survivors, with weary smiles evident all around looking forward to the new life ahead. Parable of the Sower is a visually and vocally stunning performance that reminds us of the importance of hope even at the end of the world, a fiercely relevant warning of the dangers of climate change and a call to act now before it’s too late. As Toshi Reagon puts it: “Things can change for the worse at any time, and we need to really start paying attention to things around us,” and take note of our environment, community and family lest we too find ourselves in a reality not unlike the world of Parable of the Sower.

Photos from Singapore International Festival of the Arts

Octavia E. Butler’s Parable of the Sower played at the Victoria Theatre on 4th and 5th May as part of SIFA 2018. The 2018 Singapore International Festival of the Arts runs from now till 12th May across various venues. For the full lineup and ticketing details, visit the official website here