The Esplanade Concert Hall becomes a joyous megachurch for one night only.
The Orchestra of the Music Makers takes its name from Arthur O’Shaughnessy’s poem Ode, inspired to remain movers and shakers as they dream, cultivate and create music each year. Celebrating both Bernstein’s centennial as well as the Orchestra of Music Makers’ 10th anniversary, last Saturday saw the Singapore premiere of Leonard Bernstein’s musical epic Mass. Combining multiple genres of music from jazz to rock to blues, Mass is a departure from classical concert masses and instead seeks to unite audiences under one roof, narratively taking place in a church as we join and bear witness to a single, unforgettable night service. 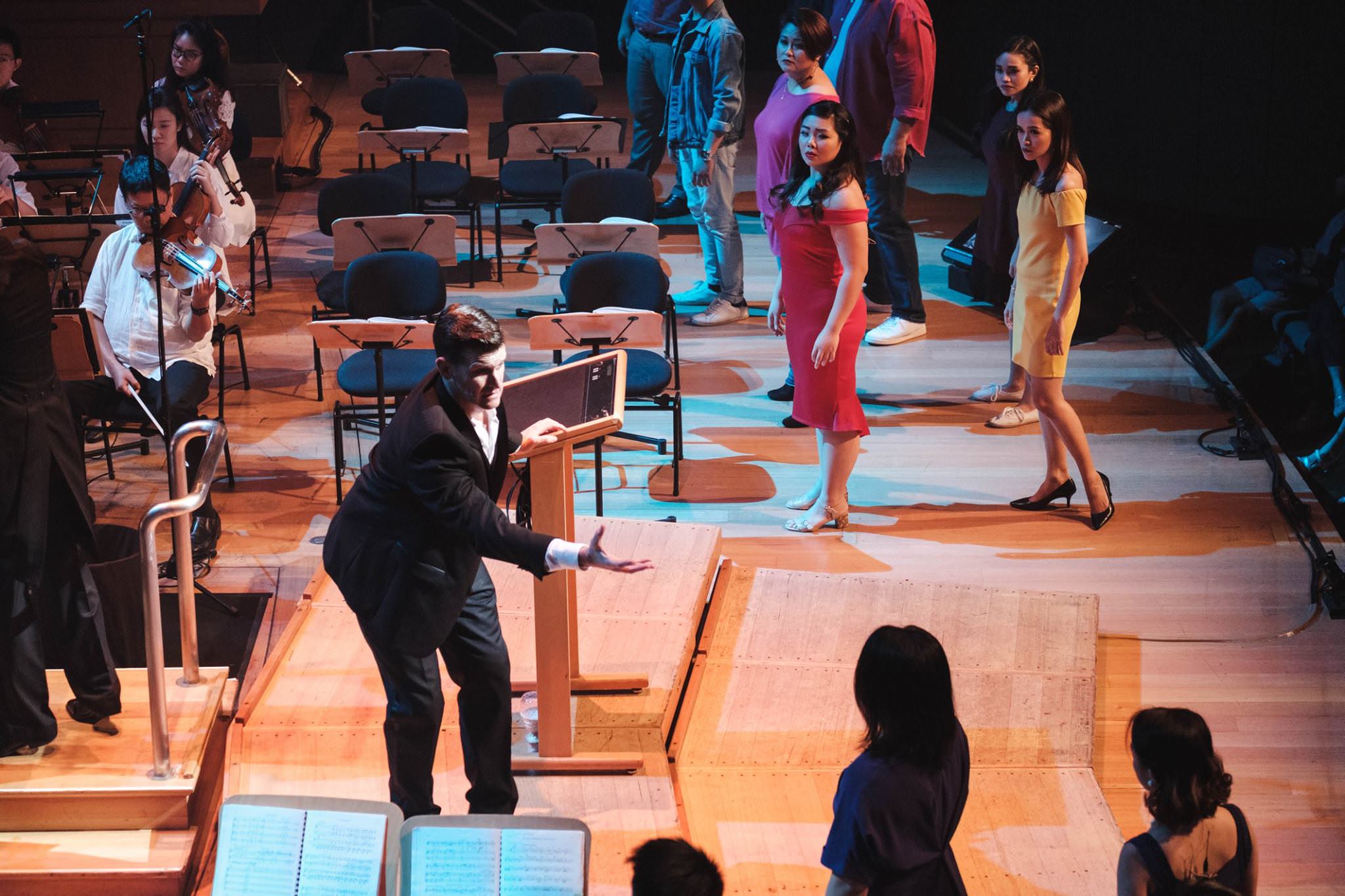 The Esplanade Concert Hall, with its wooden stage and expansive space, makes it the perfect venue to transform into a church. With a pulpit in place for the Celebrant (Kevin Vortmann, our pastor for the night) and the feeling of sitting in a church nave, one feels as if one is within a glorious, sprawling cathedral from the moment one steps into the concert hall. Mass begins, and the silver-tongued Celebrant welcomes the audience to his flock and praises God with “A Simple Song” similar to the gifted orators in megachurches rousing tens of thousands of worshippers. He uses this to quell the cacophony of voices making up a 12-tone Kyrie, bringing peace as service starts. 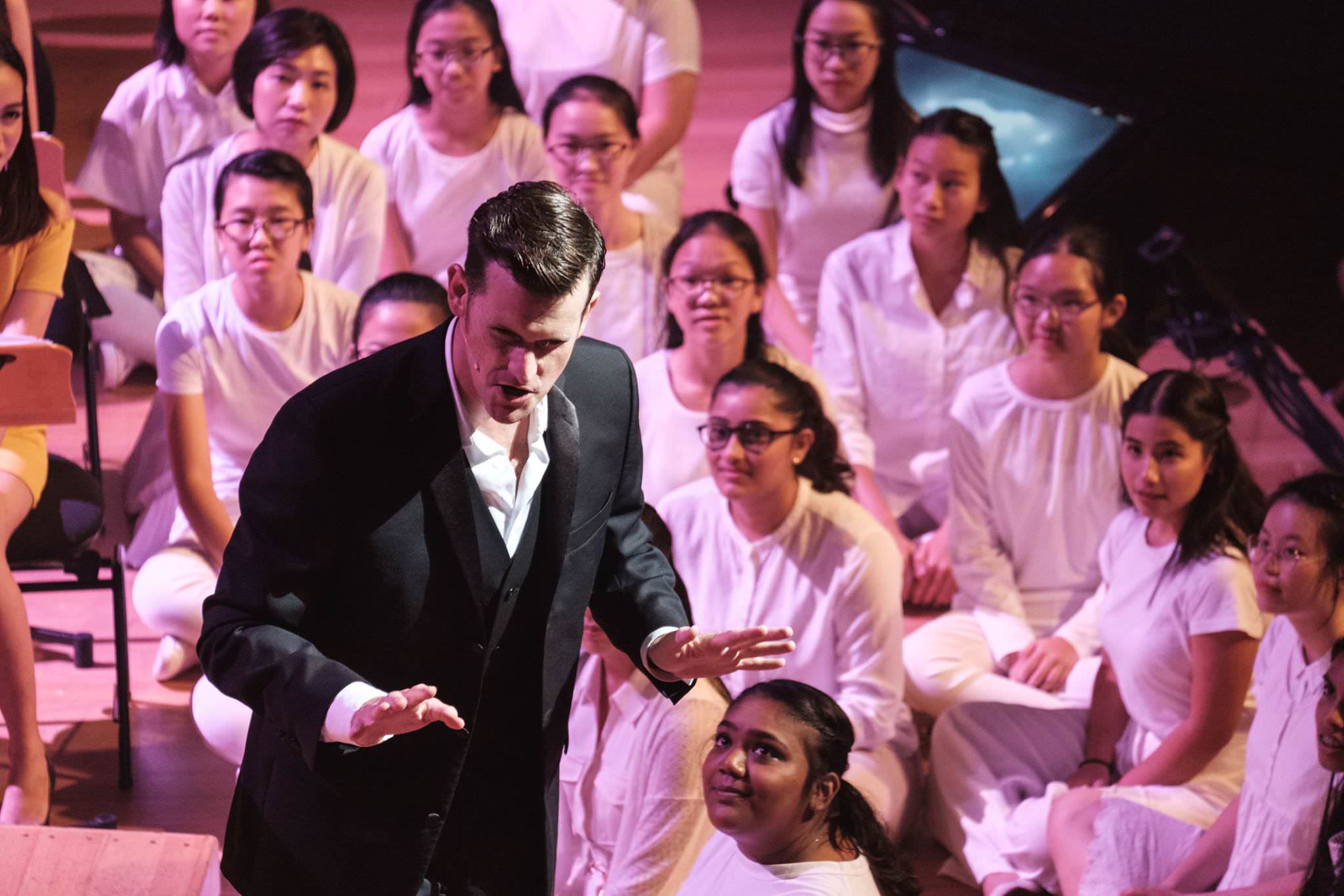 As he speaks, the choir marches in from the stalls with the “Kyrie”, similar to a typical church service, and dressed in white, resembles angels weaving through the aisles beside us, making us feel like we’ve entered a sanctuary-like safe haven while the Celebrant gazes proudly upon the entire church. The sense of realism is further enhanced by Brian Gothong Tan’s video projections of stained glass, completes the mood. 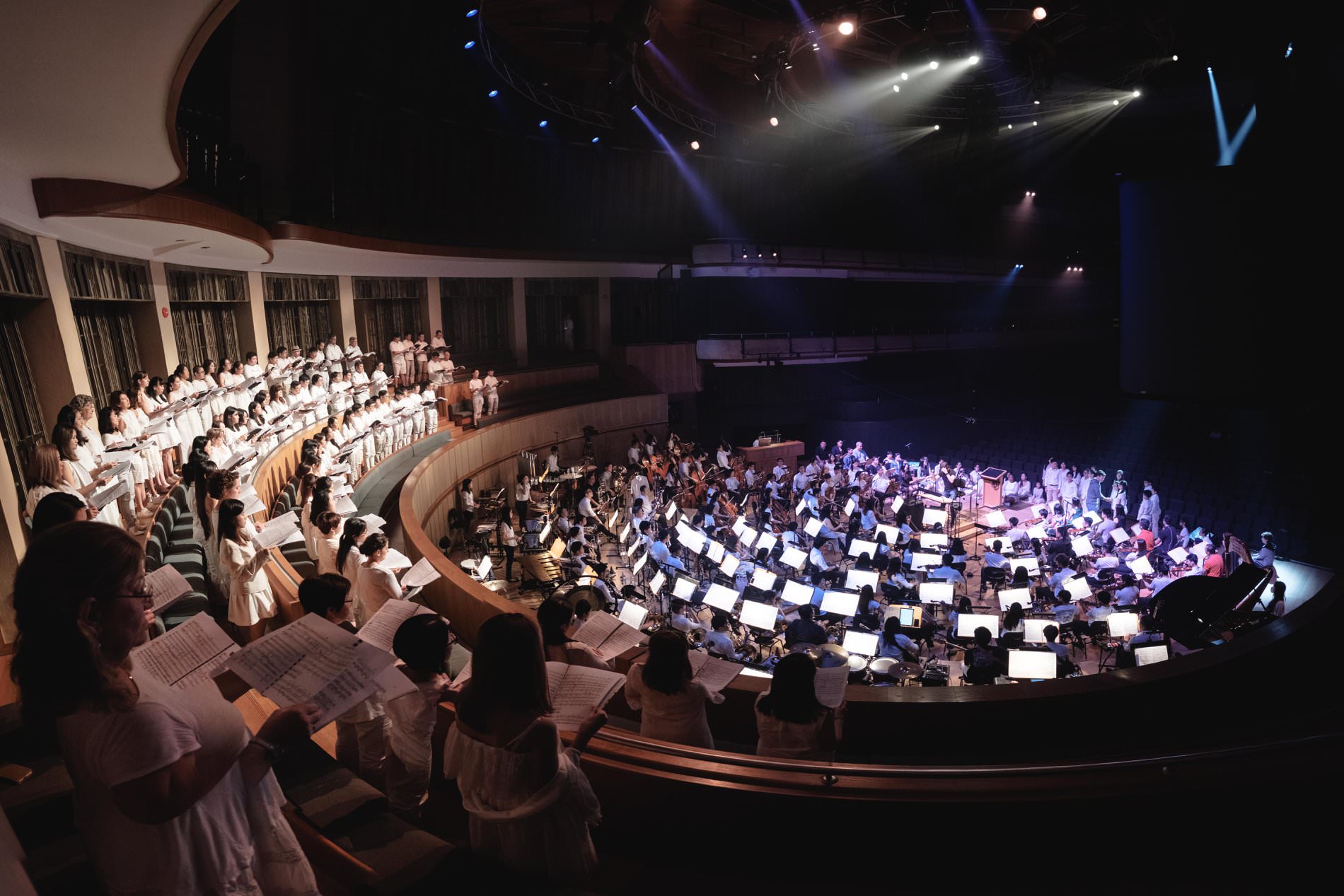 Much like an actual mass, the entire performance was punctuated with prayers and scripture readings, accompanied by onscreen projections that helped accentuate the urgency and importance of what we were praying for. With every prayer also came a chance for OMM themselves to showcase their orchestral might, led by conductor Joshua Kangming Tan as he emanated presence and personality on the podium. These interludes gave audiences the space of time to enjoy the peace and tranquility evoked by the brilliant music and strong singing from the choir. As the Celebrant recited The Lord’s Prayer, one truly felt his sincerity in surrendering himself to God and his immense need for hope and guidance thanks to Kevin Vortmann’s believable and strong performance. 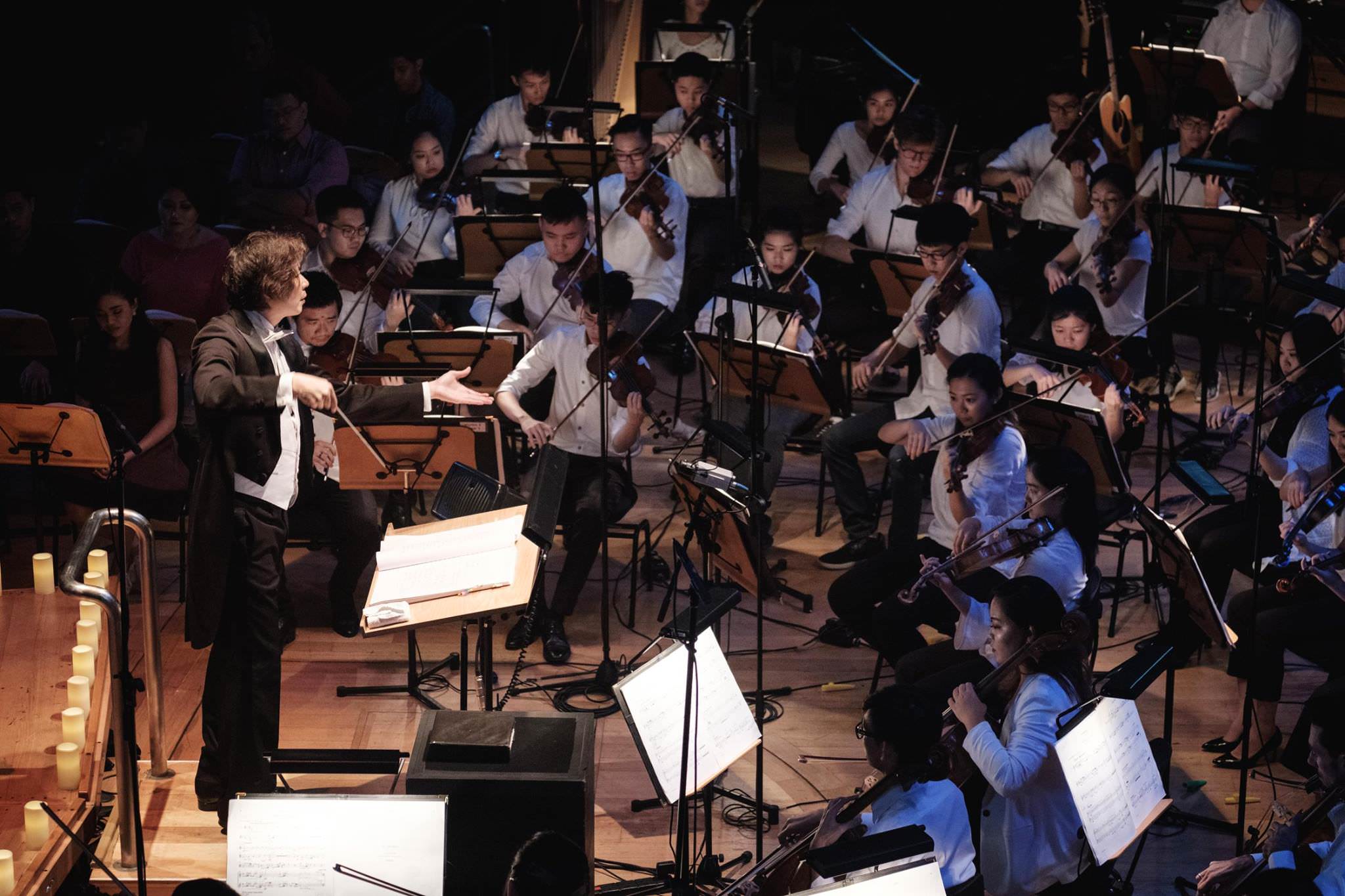 Yo Shao Ann’s lighting is key to accentuating each song’s mood at various stages of the mass, and one standout scene was during the protest, as the church was overrun with anger and discord all around. We found this a relatable moment, thinking about how a single mistake can push you away from everybody. This was especially powerful as the orchestra’s music worked in tandem with the lighting, and a highlight was principal trumpeter Lau Wen Rong’s solo, which helped bring out the whole scene. Director Edith Podesta has done a good job at orchestrating the mass chaos displayed by the cast in this scene, and one clearly remembers the image of the choir splitting seamlessly into two distinct groups, leaving the Celebrant completely alone, a perfect depiction of the rift that has formed within the flock. 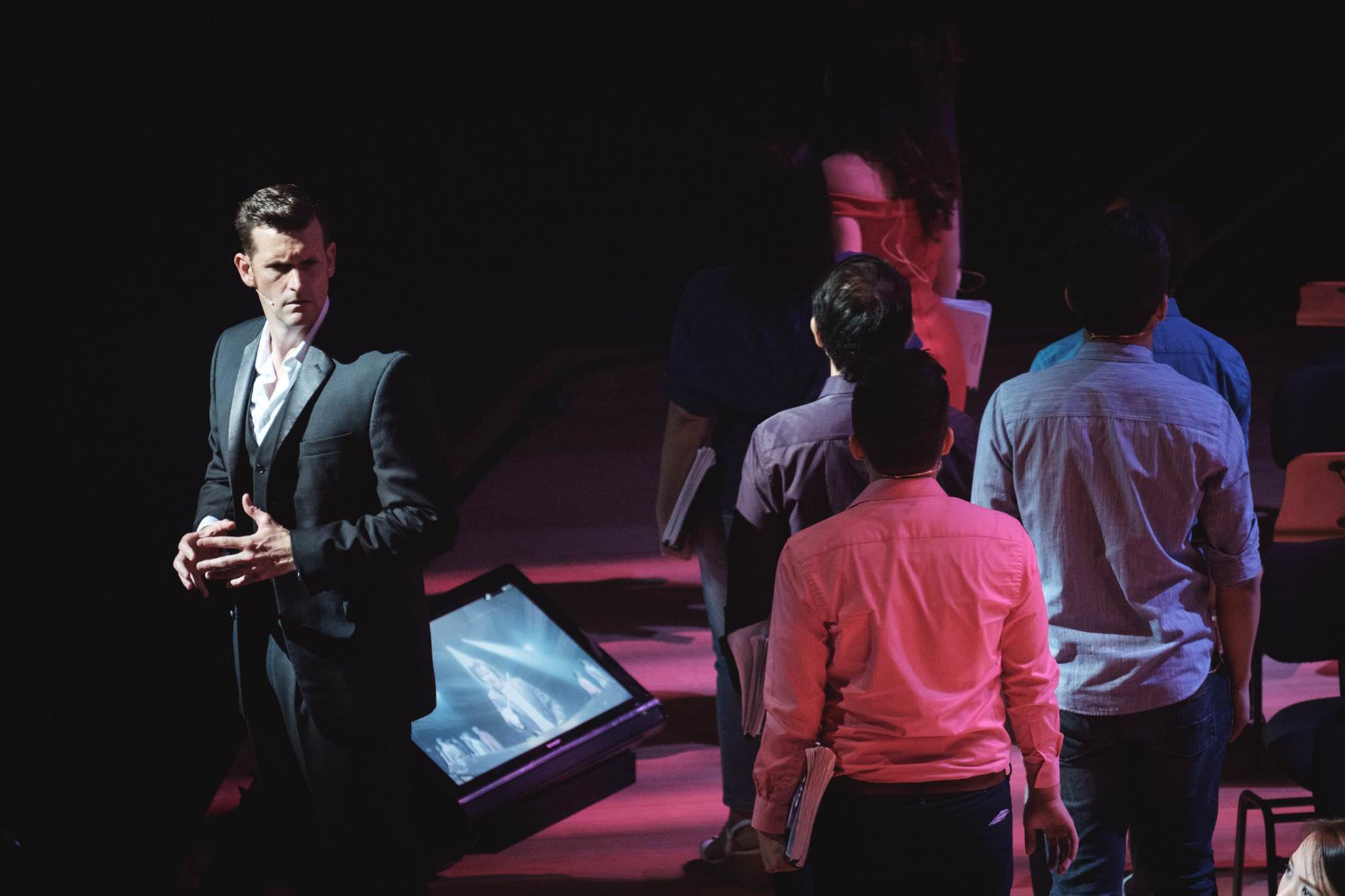 But not all is lost – towards the end, trepidation transforms into hope as boy soprano Mikey Robinson unites with the Celebrant in a duet, intoning the earlier Simple Song in a Communion, bringing his spirit and belief in God back to life. Faith is restored as the entire congregation comes together again and celebrates the joy of gathering as one and praising the Lord. The Celebrant’s test is over, and one has borne witness to the mysterious, divine way in which religion and God works. Exhausted and drained, the Celebrant looks upon his united congregation now with a newfound vigour, and ends the entire performance with the words, “The Mass is ended; go in peace.” Service has ended, and we are to return home, in good spirits and filled with the grace of God OMM has brought out for us with Bernstein’s Mass.

Photos from Orchestra of the Music Makers

0 comments on “Review: Leonard Bernstein’s Mass by Orchestra of the Music Makers”