We’re at Drama Box’s home on Trengganu Street in Chinatown, interviewing Drama Box artistic director Koh Hui Ling and writer Jean Tay, when Hui Ling suddenly recalls: “We were talking to the uncles and aunties living in the area, and a common thing we heard from them was how so many of them said ‘Chinatown doesn’t belong to us anymore; it belongs to the tourists.’”

That is the basis of Drama Box’s newest production, Chinatown Crossings, set to premiere this June. A site-specific tour and promenade theatre experience that will have audience members walking around Chinatown, Chinatown Crossings is here to take back Chinatown’s history and present these stories through the lens of this production, allowing visitors to take a step into the past as we follow three characters down the streets of Kreta Ayer and Chinatown as they relive the memories of their lives.

Though the Chinatown of today may feel like a tourist trap, it wasn’t always this way. Sometime in the past, it used to be a thriving community, multiracial and teeming with first generation immigrants as they put down roots and formed a home in this brave new world of Singapore. Says Hui Ling: “We wanted to capture the real stories of Chinatown from real people. Back in 2007, when we did Ignorland, it was a huge hit with both schools and members of the public. Being a site specific project, it was something they could connect to, and physically visit, and the stories could then be passed on to their friends and children.”

A large part of Drama Box’s works focus on community engagement, seen in projects such as 2014’s IgnorLAND of Its Time at Bukit Ho Swee and even the ongoing Both Sides, Now. The Chinatown Crossings project was first started in January 2017, and despite having been situated in Chinatown for years already, the Drama Box team spent nine months getting to know the dynamics of the place and people in it. Says Jean: “We were always trying to figure out how best to engage the community, using the spaces and stories around us to build relationships with friends and stakeholders in the area and bring that out in the eventual performance.”

Over the course of the production, Drama Box has fostered new bonds with various members of the community around them, ranging from the Singapore Heritage Society’s heritage enthusiasts as they work to record vanishing practices, to the clan associations attempting to recruit younger volunteers and members. Says Hui Ling: “We’ve been wanting to showcase some of these community groups and friends we’ve made over the course of creating the production. We may not put them directly in the show, but we’re trying to highlight them to audiences and give them an avenue for interaction, lest they become forgotten and they increasingly struggle to stay relevant. We’ve met so many colourful characters over the process, from elderly majies (domestic helpers) at the senior activity centre to this lady who used to skin snakes alive, it really gives you a sense of the colour and flavour of this place.” 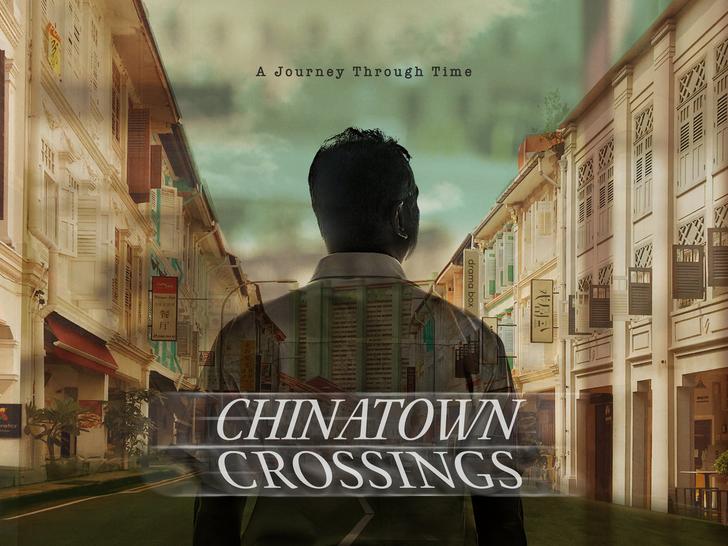 Chinatown has a long history of a changing landscape, and the team grappled with the actual geographic boundary the performance would cover. It was eventually decided that there would be a total of seven stops along the tour, beginning at Pagoda Street at Chinatown MRT station, and end at Keong Saik Road, closer to Outram MRT station. Audience members are advised to dress comfortably and to prepare for plenty of walking, including climbing up stairs.

The story of Chinatown Crossings itself follows the changing relationship between three characters – Kunalan (Pavan Singh), an Indian man born and raised in Chinatown, Ting Ting (Sabrina Sng), his best friend and daughter of his landlady, and Fong Cheh (Jodi Chan), a majie that takes care of him. As we weave through these old shophouses and temples, Drama Box has even cast two younger actors to play Kunalan and Ting Ting in their childhood, appearing during moments of reminiscence. 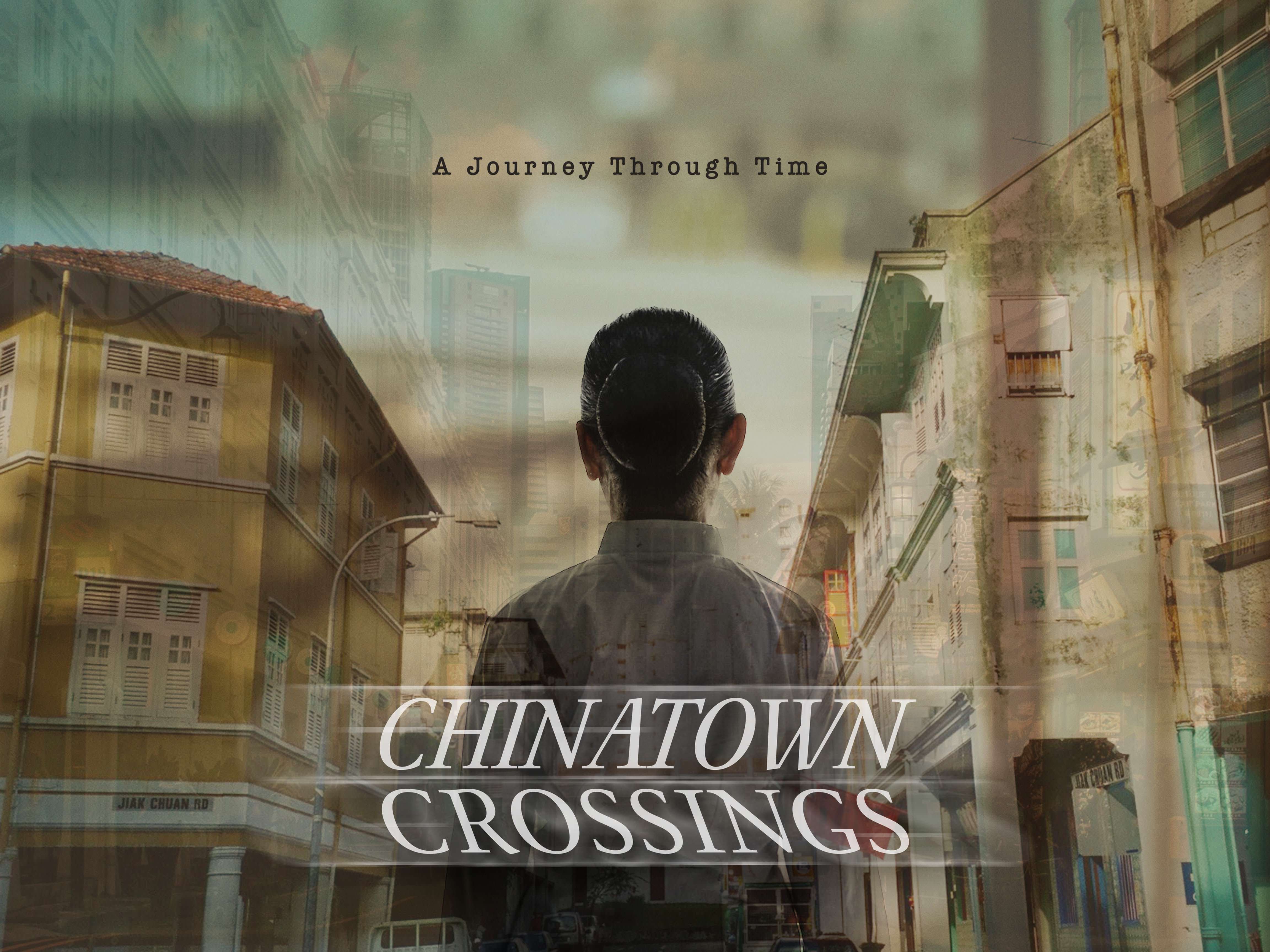 Says writer Jean Tay: “I never expected to be doing so much research on non-Chinese cultures when I first embarked on this project. We discovered that there’s a long history of Indians embedded and accepted as part of the community here. We talked to this Indian man who lived on Keong Saik Road and speaks fluent Cantonese. He’s been there from his childhood to when he started his own family, all the way till the roof literally fell in on them. For a lot of these migrants, your family wasn’t your blood relations back home, it was the people living in the same area.  Nobody cared what your background was, and you found a way to communicate to form this community and home of different groups of immigrants together.”

Jean continues: “Singapore’s Chinatown is so different from those in the Western countries, where everyone there is ethnically Chinese. But here, it’s so multi-ethnic – you’ve got an Indian temple, a masjid and a church all down the same street. In the beginning, everyone came to Singapore as a migrant, and Chinatown represents how this mix of people were trying to find a home and family amidst finding work in a foreign land. There’s this great longing for the Chinatown of the past, back when it was still a wild cowboy town with real character before the government made the space more commercial and touristy.”

When asked about the inevitable comparison to the string of other site-specific works that have sprung up this year, Jean explains how this production will not be focusing on a breadth of stories, unlike others, and instead, will strike at the emotional level as we follow this trio of characters through Chinatown and journey through the years of their lives. Says Jean: “It’s an intimate project with a big footprint. It’s interesting how over the course of this project, we found that a lot of people from the team have links to Chinatown. Our producer, for example, has links to the clan associations but always refused to join, but now she’s making an effort to get involved.”

Hui Ling adds: “You know Charmaine Leung? She’s the author of 17A Keong Saik Road, and we were interviewing her because she’s an expert on majies. We found out she does some marketing, and we needed a marketing manager, so we approached her and she agreed!”

Jean continues: “I was very inspired by the founder of Lepark. Her family used to stay here, in the Drama Box office before it became Drama Box, and when we brought her here to talk to us, she took a moment to look around and recall how this place used to look back in the 80s, and it was such a magical moment. When she set up Lepark, I saw it as a way of transforming a defunct space to build a new community and breathe new life into a space to reclaim it.”

Hui Ling concludes: “For us, Chinatown Crossings is the culmination of us listening to the community over the last 1.5 years, and presenting the struggles and losses of the people around us. There’s a lot of trust given to us to bring these stories to life. For me, it’s most important that people in the community come and watch this show to hear their stories preserved. The theatre company may disappear one day, but these people’s stories and history will live on.”

Chinatown Crossings takes place at Chinatown from 22nd June to 18th August. Exact meeting location to be revealed closer to the date. Tickets available from Peatix

0 comments on “Taking Back Chinatown: An Interview with Koh Hui Ling and Jean Tay of Drama Box’s Chinatown Crossings”