Dark fairytale meets con-job for justice in this story-within-a-story about the holocaust and art.

The art world is fickle and subjective, with the monetary worth of a painting determined by market forces and its value by its frame, specifically the way a backstory ‘frames’ and positions an artwork to give it legitimacy. But even the volatile art market is in agreement that a controversial work by universally evil genocidal dictator and ex-mediocre artist Adolf Hitler is a hard-sell. How then can one find a way to frame the value and worth of a Hitler painting? 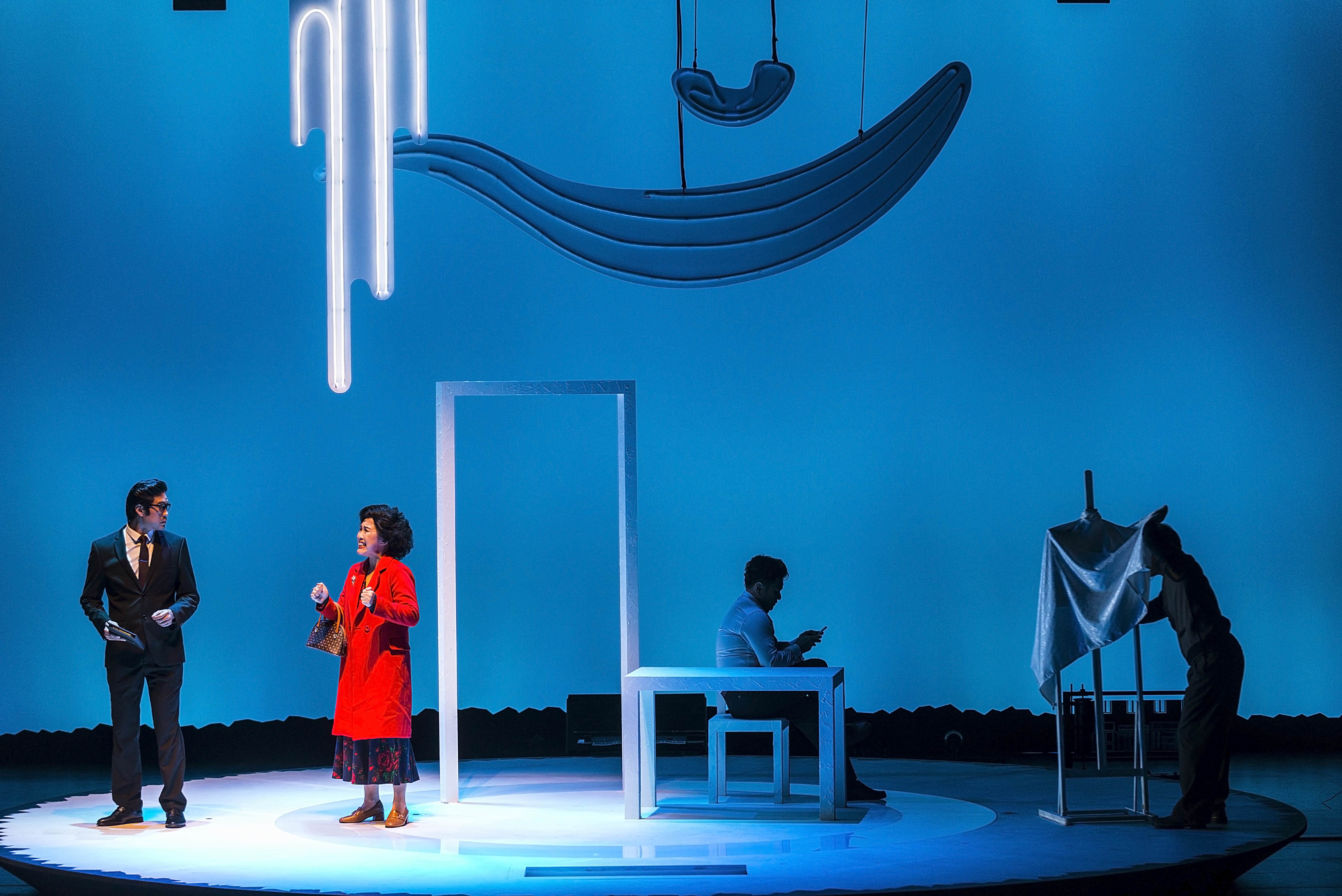 Written and directed by Chong Tze Chien, Framed, by Adolf opens with title credits as each actor and their role is introduced, highlighting how what we are watching is in itself a framed (staged) production and calling into question themes of authenticity and fiction. The play imagines a fictitious scenario where a painting by the Fuhrer himself has been discovered to be a masterpiece. Its creator’s identity however, makes the painting near worthless, and its seller (Serene Chen) must convince her buyers – a wealthy businessman (Darius Tan), an auctioneer (Timothy Nga) and a professor (Tan Shou Chen) of its authenticity and true value. Though saddled with a difficult script, Serene Chen handles her lines deftly, shifting rapidly and smoothly between her quickfire interactions between all three skeptics, and armed with a strong presence, is key to holding the entire play together. 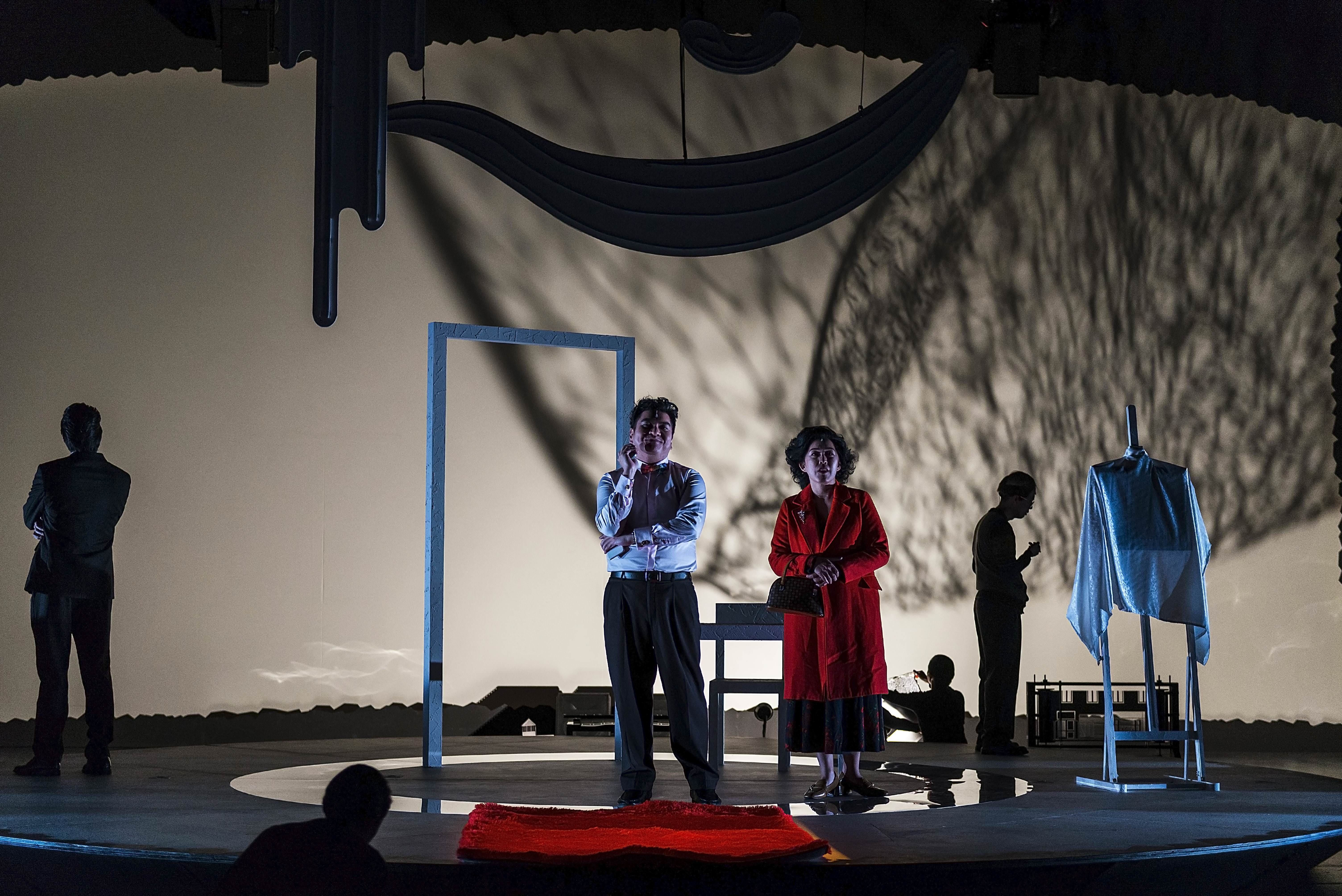 The German dictator was never the star of Framed; instead, the crux of Framed lies in the heartbreaking story the seller uses as leverage to raise the profile of the painting, telling how her Jewish grandfather Abdown (Joshua Lim) came to possess the painting. This story is performed in full onstage, and takes the form of a dark, cautionary bildungsroman, as the autistic Abdown navigates Nazi Germany and discovers the darkness within all humans while doing his best to survive, even taking on a gentile’s identity and joining the Nazis in the process of ‘blending in’. Forgetting his own identity as a Jew, Abdown is remembered and ‘framed’ as a Nazi war criminal. Framed then forces us to question our first impressions in a world increasingly rife with fake news, and that sometimes all it takes is a change in perspective to understand and sympathise with a person’s actions. 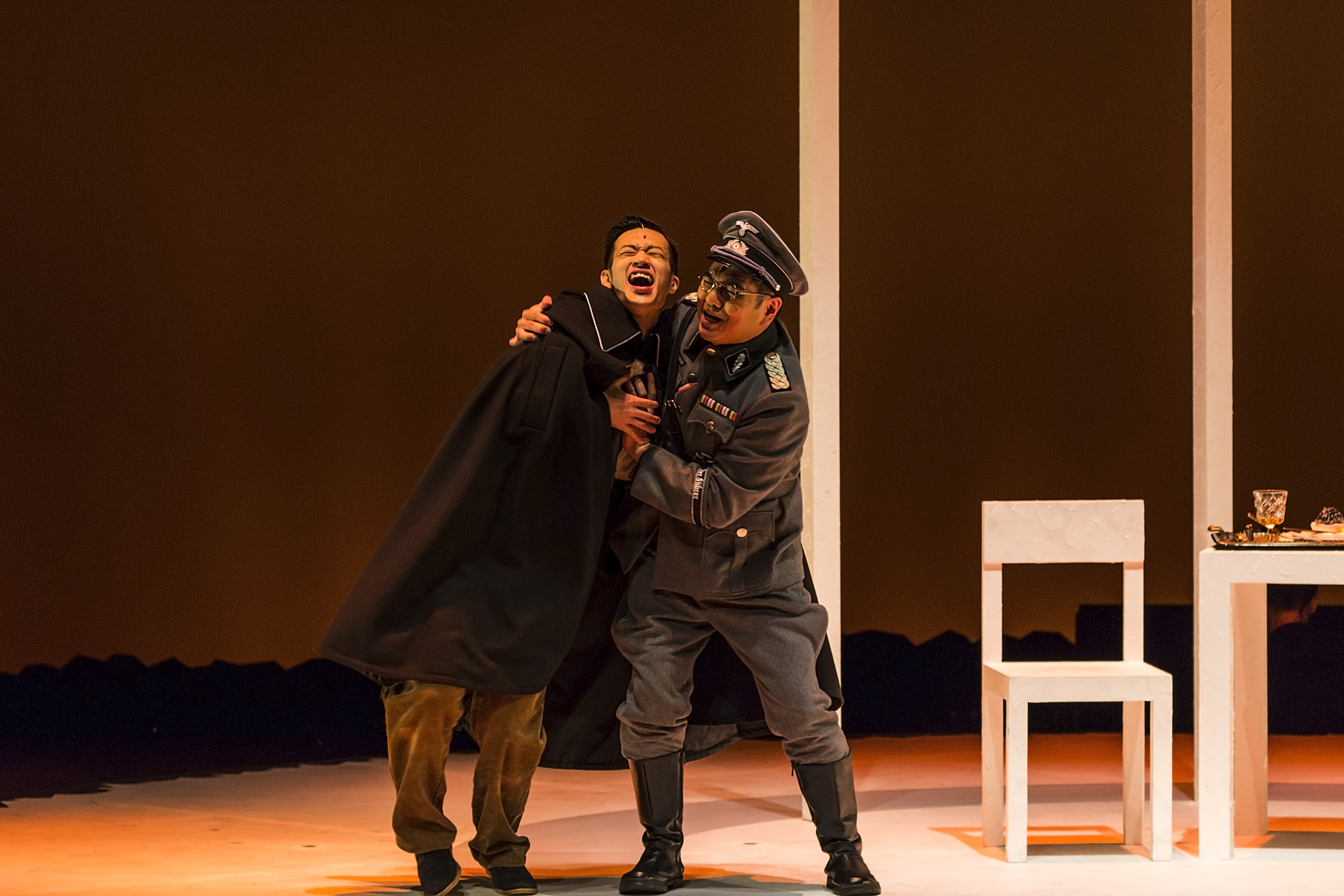 Much of Framed’s success hinges on how much we invest our emotions in the innocent Abdown, and is anchored in Joshua’s strong performance. One cannot help but feel protective of him as his acquaintances each act selfishly, crushing his naive world view and breaking his spirit with each betrayal. It is this attachment to Abdown that convinces one of the value of the Hitler painting, not so much artistically, but historically, and the struggle behind preserving it during the war. 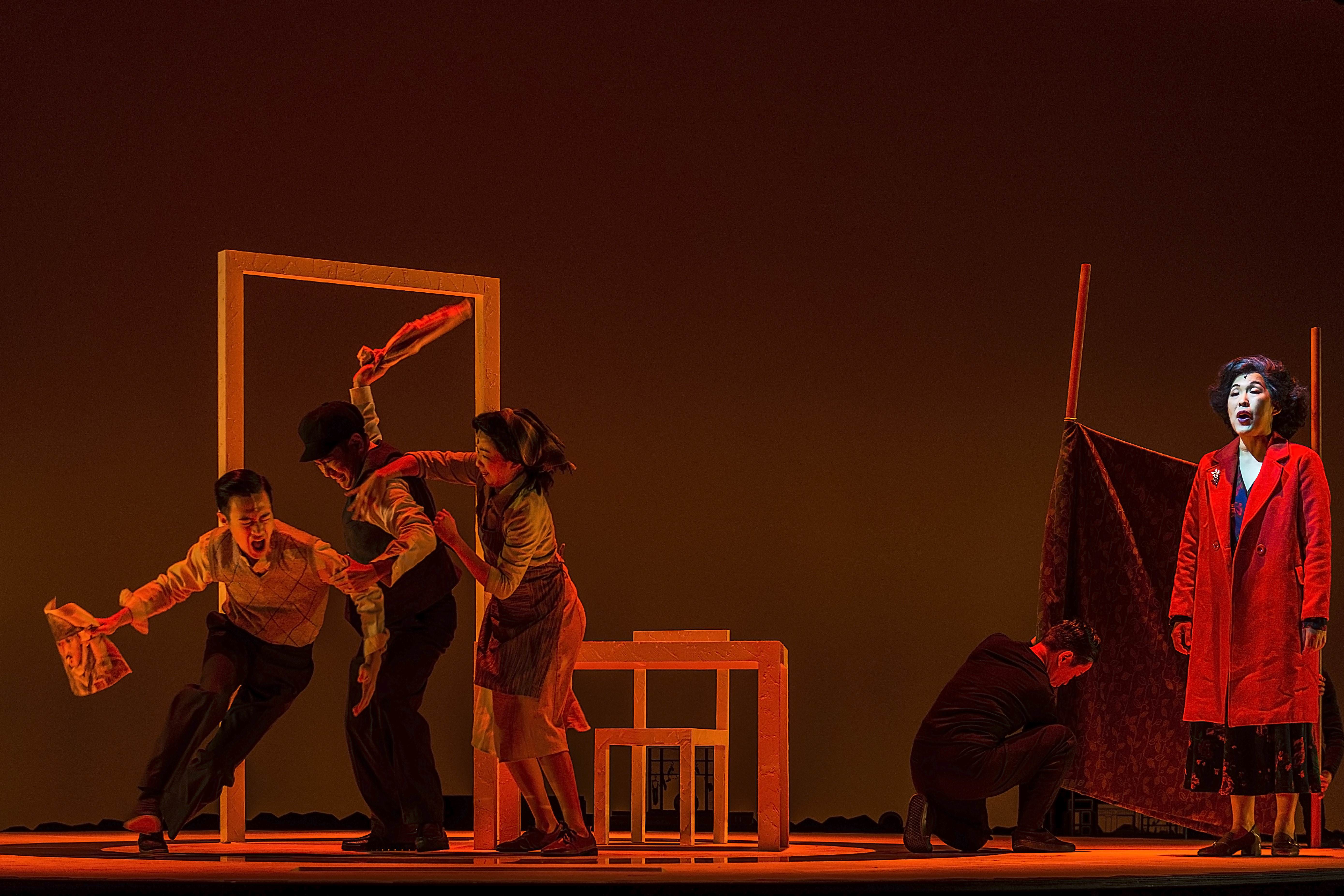 Tan Shou Chen and Zee Wong do particularly well to build up a believable bond in the short time their characters spend with Abdown onstage, the latter’s heel-face turn cutting especially deep once revealed. And while their roles are similarly limited by time onstage, Timothy Nga and Darius Tan’s presence is felt as they embody each of their varied characters, equally shifty and unscrupulous in their portrayals. There is the constant sense of something insidious lurking beneath the surface, as almost every character introduced possesses an ulterior motive or hidden agenda, from a benign longing for companionship to horrific ties to Auschwitz, evoking an image so immediately nightmarish, one feels physically sick. 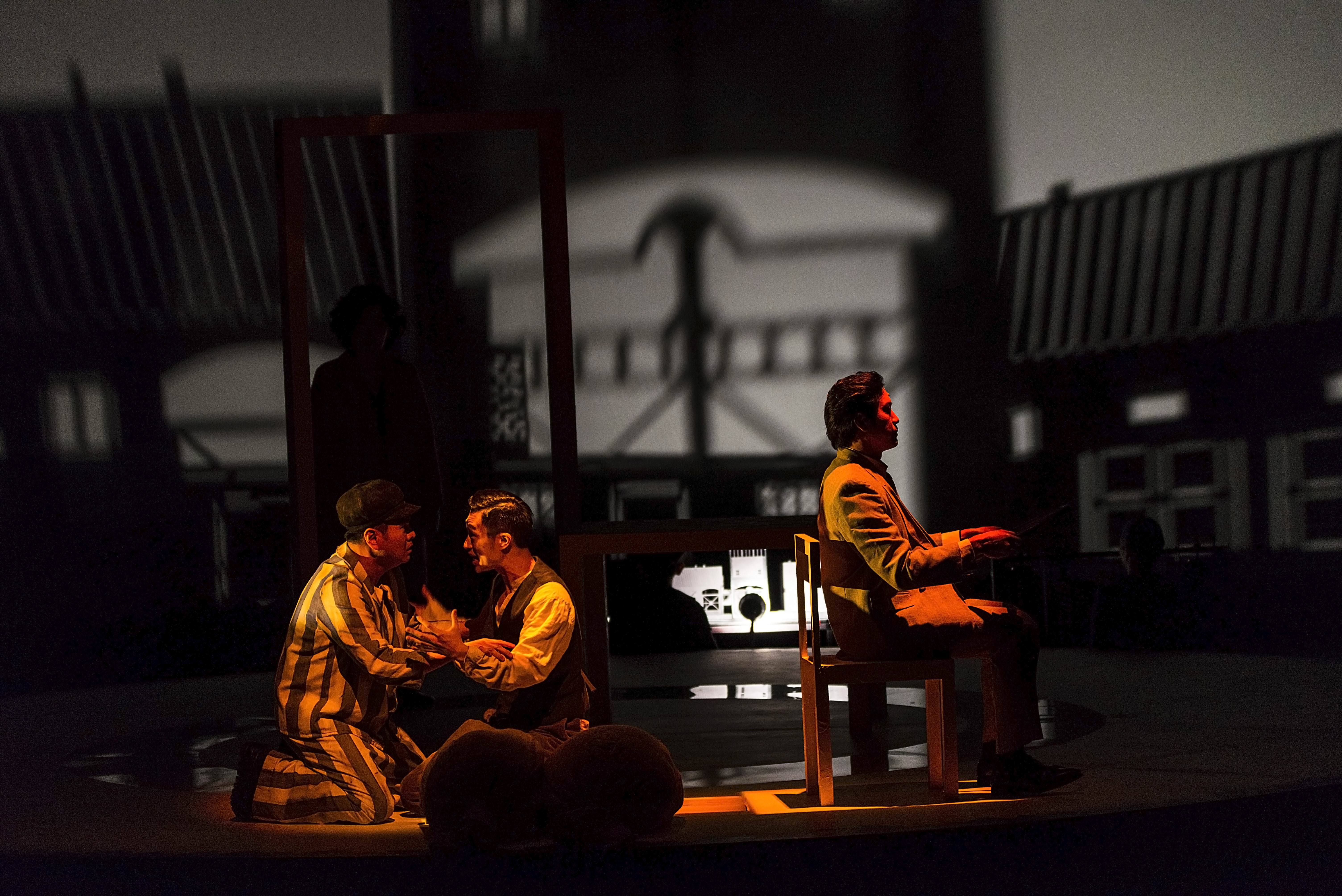 Designed by Chan Silei, Framed’s set itself resembles a blank canvas, and allows for the implementation of some creative design elements, such as lights shaped like brushstrokes and dripping paint to re-emphasise the art motif. At other times, shadow puppetry acts as a brilliant moving backdrop to certain scenes when projected on a big white wall upstage, creating a sense of foreboding as these black shapes rise up to engulf and dwarf the cast onstage as they traverse the nightmare Nazi-infested landscape with recognizable landmarks, from Brandenburg Tor to the looming gates of Auschwitz. This was most strongly seen when Abdown leaves for Poland in a train, as the ‘set’ moves to display mountains and forests, in conjunction with sound designer Darren Ng’s realistic train whistling and chugging sounds, simultaneously epic and fearful as Abdown travels to this new territory in search of Hitler. 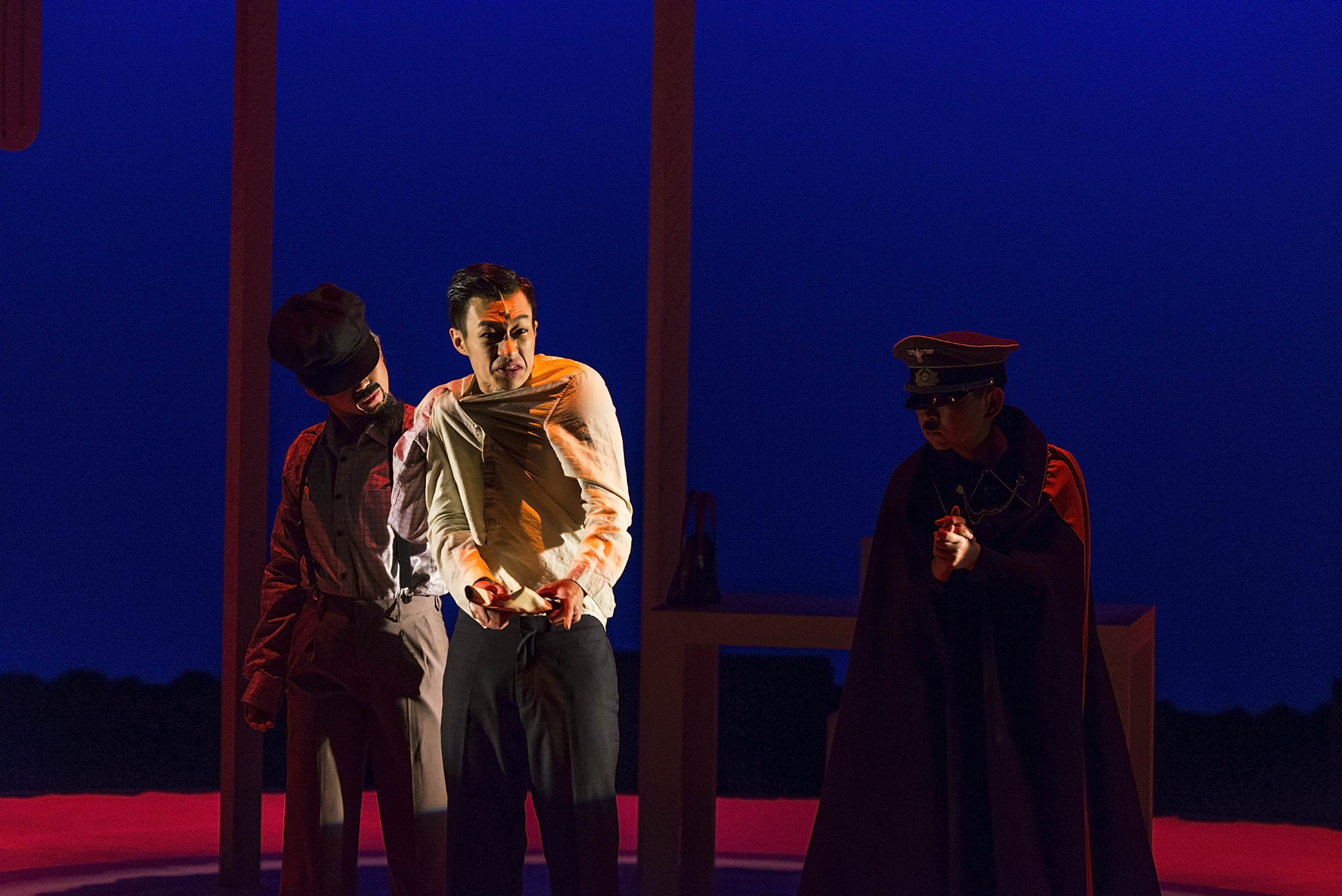 By greying both morality and history itself through the fog of war and the subjective lens of ‘good’ art, Framed, by Adolf forces audiences to re-examine our own ‘concrete’ truths with a critical eye, and that guilt and innocence are never as black and white as they may first appear, often subject to whitewashing throughout history. Beauty may lie in the eye of the beholder, but truth lies in the heart of the believer, and Framed makes clear that the rarity of authentic truth makes it far more valuable than any painting ever made.

Framed, by Adolf plays from 15th – 17th June at the Victoria Theatre. Tickets available from SISTIC

0 comments on “Review: Framed, By Adolf by The Finger Players”