Mozart gets funky in this accessible new interpretation that sets Il Re Pastore in a nightclub.

Opera often gets a bad rap for being stuffy and inaccessible to the general public. But in their debut production, The Opera People are pulling out all the stops to produce a show that anyone from any background would be more open to attend and be able to appreciate.

In Love and Duty, The Opera People reinterpret Mozart’s classic opera Il Re Pastore (The Shepherd King). While retaining the original Italian score, director Tan Liting and The Opera People co-founder David Charles Tay have decided to adapt Metastasio’s libretto for a modern Singaporean audience, changing the original pastoral setting to that of a nightclub in Singapore. Nowhere then is it more appropriate to stage this production than in The Esplanade Annexe Studio, itself a former nightclub. As such, it naturally provides the space and setting for audiences to feel like they’re witnessing the entire performance behind the scenes of an actual club. This is helped by Yo Shao Ann’s club-like lighting illuminating audience and cast during the show, and the echoes of classical-style club music constantly playing faintly in the background.

From the moment one steps into the Annexe Studio, one already feels immersed in the entire experience, with The Young Musicians’ Foundation Orchestra gathered at the end of the narrow catwalk-like stage, which audience members were seated around. Conducted by music director Alvin Seville Arumugam, this seating arrangement was carefully thought out to give everyone a good view of the performance, and its closeness helped circumvent the usual sense of distance from a traditional proscenium stage.

Love and Duty follows the lives of the Ting household, headed by patriarch and business tycoon Alex Ting (tenor David Charles Tay) as he successfully acquires a new night club. But to consolidate his wealth and employees’ loyalties, he decides to betroth his only son Ami (soprano Felicia Teo Kaixin in a genderbending role) to night club manager Tammy (soprano Phoebe Chee), the daughter of the club’s previous owner. But little does he know that Tammy is already dating Alex’s right hand man Algernon (tenor and The Opera People co-founder Jonathan Charles Tay), while the whimsical Ami is steadfast in his love for foreigner girlfriend Elisa (soprano Jassy Husk), much to Alex’s disdain. Will love triumph over family obligation?

Best known for creating the show Pretty Butch (which premiered at the M1 Singapore Fringe Festival 2017), about people who buck the trend of what society considers normal, it makes complete sense why director Tan Liting would take on this project. The role of Ami has traditionally been played by a female soprano or male castrato, and in The Opera People’s version, Ami has chosen the performing arts as a career, an atypical choice for a male that garners his father’s disapproval. Yet Ami does not choose to bend to his father’s will, fully embracing both his love for the arts and a steadfast love for Elisa against all odds, making him a surprisingly modern, relatable hero in his confident acceptance of his identity and life choices. Character motivations are easy to understand in Love and Duty, and the simple but effective story of individual desire against society’s demands (a literal patriarchy in this case) comes through clearly in this production.

Singing-wise, each and every one of the cast are accomplished performers, and more than able to handle Mozart’s score. For Felicia Teo Kaixin as Ami, her role demands a strong balance between masculinity and femininity, with plenty of high notes in her solos that Felicia hit effortlessly and smoothly. Opposite her as Elisa, Jassy Husk was undoubtedly our favourite performer of the night, showcasing her vocal prowess already in the second aria ‘Alla selva, al prato’ and maintaining that same level of confidence and gusto throughout the night. In particular, Jassy exudes a certain charm each time she steps onstage, be it in song or in acting, and shares a strong onstage chemistry with Felicia, making it easy to root for their relationship, particularly when their two voices come together complementarily in a duet in the second half of the performance. Meanwhile, Phoebe Chee and Jonathan Charles Tay are believable as lovers fearing the end of their relationship, while David Charles Tay does not simply rely on his makeup and white hair (He literally went full on and dyed it, talk about commitment); he exudes a determined strength in his physicality and voice that perfectly encapsulates his role as patriarch of the family. 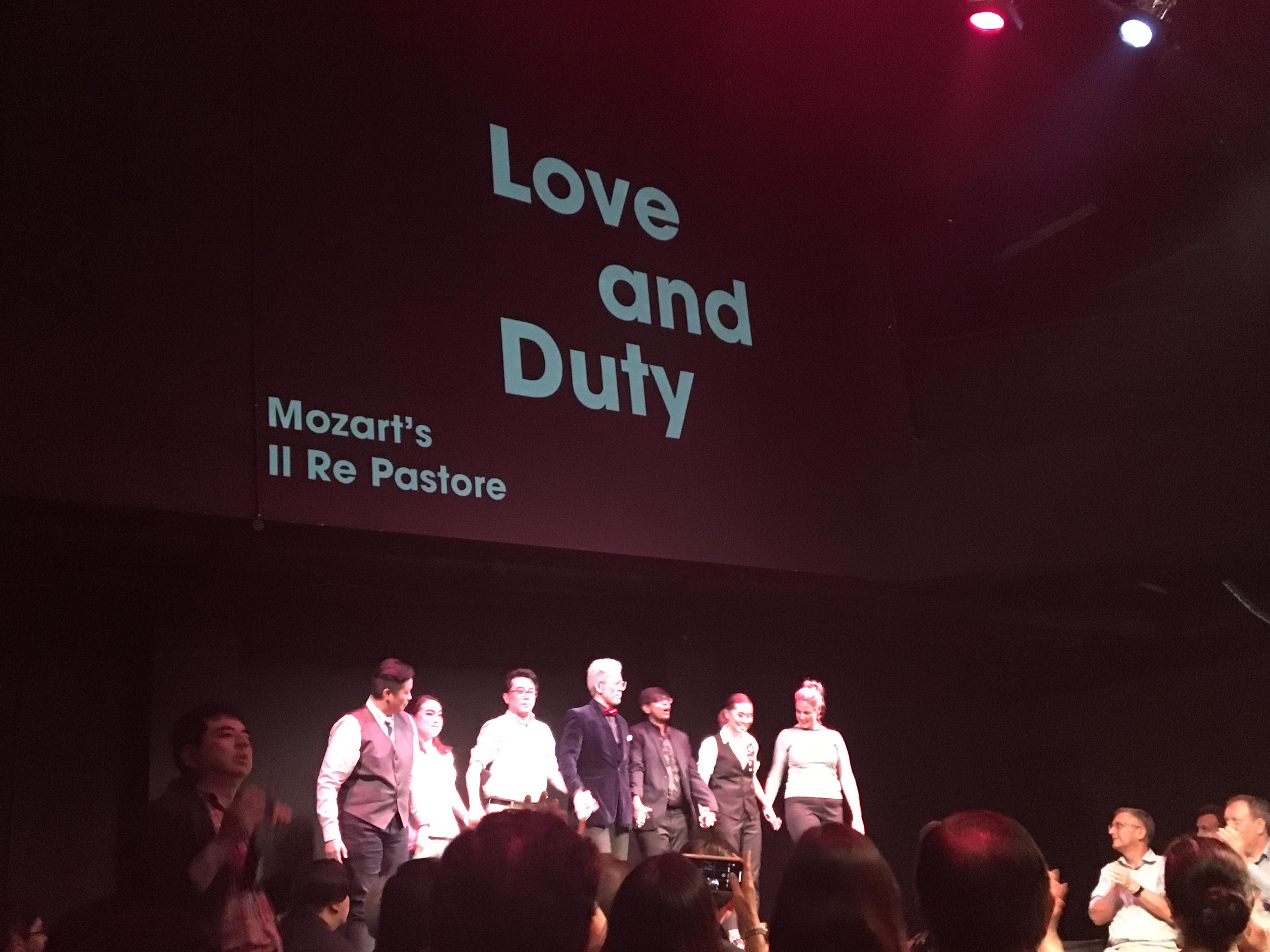 Though its storyline may be simple, at its core, Love and Duty is a fundamentally relevant tale of intergenerational conflict, pitting the obligatory duties from parental figures against the desires of the individual, familiar to just about anyone who’s faced those kinds of pressures growing up. With Love and Duty, The Opera People have created a platform that shows how opera can be accessible, fun and innovative, and slowly but surely, grow the opera-going audience in Singapore.

Love and Duty – Mozart’s Il Re Pastore plays at the Esplanade Annexe Studio on 6th and 8th July. Tickets available from Peatix

0 comments on “Review: Love and Duty – Mozart’s Il Re Pastore by The Opera People”