Slick, skilful choreographies that explore our relationship with our space, each other and our very selves.

Dance has always been seen as one of the most purest forms of art, the human expression choreographed into physical movement that requires no explanation to feel each action onstage. With M1 Open Stage + Divercity, the 2018 M1 CONTACT Contemporary Dance Festival presents a series of promising works, both local and international, that explore the limits of human expression and how we relate to each other.

The only solo performance of the night, Annamaria Ajmone’s performance already began the moment we stepped into the Esplanade Theatre Studio, with Ajmone standing in the middle of the stage while audience members seat themselves in a triangle formation around her.

Keeping the houselights on, Trigger feels like a rehearsal, with Ajmone starting off by swinging her left arm in a circle, faster and faster as the minutes go by. This ‘warm up’ seems to awaken her body, as she skilfully and rapidly launches into a series of short, precise movements across her entire body, as she makes her way around the triangle. Stretching, exploring and even ‘flirting’ as she pauses for a moment as she dances past each audience member, the jungle-like, primal soundtrack from Palm Wine evokes the wilds of Africa, and Ajmone becomes a hunter as she moves outside of the triangle, transcending her boundaries and becoming lord of the land. Trigger then becomes a ritual for Ajmone, where the act of rehearsal is likened to familiarising one’s self with the space, playing with it as she transforms it from strange land to comfortable shelter for herself.

This Is How We’ll Meet/Part by Marcus Foo (Singapore)

This Is How We’ll Meet/Part is the first duet of the night that explores the recurring themes of the complexity, pains and pleasures of human relation. In this choreography, Shawn Tey and Eunice Wee play a couple dressed in sleepwear, and begin with a well-executed, silent exchange under a single spotlight, as the two swipe, jab and ‘fight’ with each other, feet planted firmly on the ground but never touching each other.

One imagines then that this is a couple going through the trials and tribulations that most lovers do. The most striking thing about this choreography is its staging, which utilises a multitude of spotlights cast across the entire space, with each half of the couple moving from spotlight to spotlight, creating a kind of forest of shadows and light as the two continually search for each other amidst this maze. When they finally do meet, they lean in close, almost kissing but never touching each other. The constant tension distance created from this keeps us wondering if and when the couple might ever rekindle their relationship again, reminding us of the underlying desire within all of us for a happy ending and the fundamental want for connection between people. 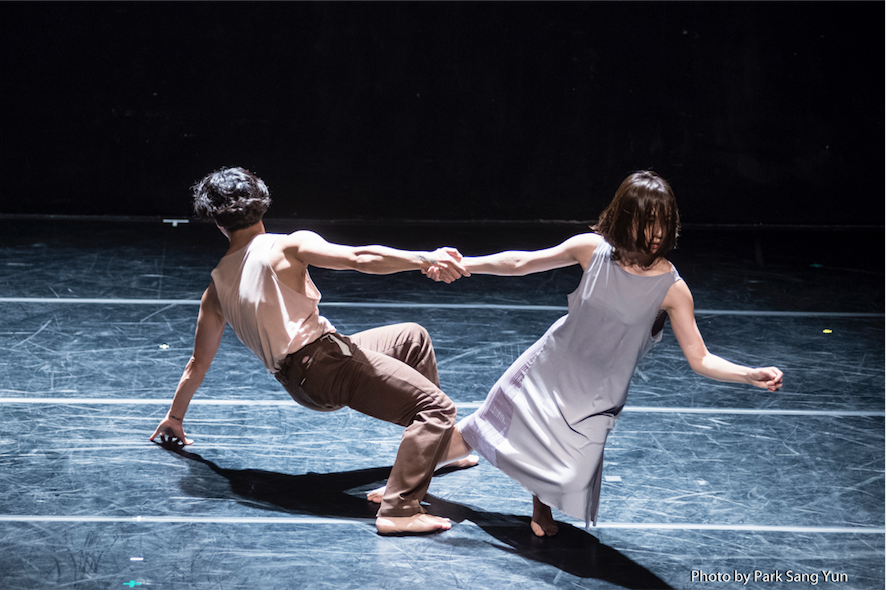 Ryu Jinyook and Kim Hyeayoon begin this performance as a single creature, connected at the head by a stretch of fabric that obscures their faces. Together, they are a chimaera that move in harmony, with Hyeayoon attaching herself to Jinyook’s leg and torso as they writhe and tumble across the stage. But much like any couple, each requires their own space at some point, and the two begin to explore what happens when they separate, removing the fabric to become individuals.

Yet even in their separation, they seem to be unable to truly establish their own identities, remaining perfectly in sync as they continue to move around the stage, each one a perfect mirror of the other as they attempt to rejoin and recapture that same sense of togetherness. But try as they might, they can never find that same bond again, replicating the real life situation of how broken relationships are some of the hardest things to mend. Tightly choreographed and executed with absolute precision, Two-gather was certainly one of the most arresting, exciting performances of the night.

Goh Shou Yi has a hand in the theatre world, and we last saw his choreography in Toy Factory’s Prism (2017), and together with Kubota Mai, has created a distinctly theatrical work in NAKA. NAKA can mean both ‘inside’ or ‘relation’, and in this performance, combines both meanings as Shou Yi and Mai, dressed in one piece nightgowns, find themselves in an enclosure (designed by David Li), almost as if they are subjects to be experimented on. While inside, both dancers perform a riveting choreography to Steve Reich’s ‘Clapping Music’, but given the small physical space, it’s not long before they become curious as to whether there is something more out there, as they push at the plastic sheet walls.

As they explore, they realise the structure is in fact, mobile, moving from one corner of the stage to another. When Mai discovers that she can escape from this enclosure simply by opening up a gap, she relishes this new world, while Shou Yi remains ‘safe’ inside. Tension builds up when the two are unable to come to a consensus as to whether to stay inside or out, and their choreography becomes increasingly less synced, showcasing a disjoint in their minds leading to a disjoint in physicality. With Shou Yi refusing to accept the outside world, NAKA becomes a story of a breakup and separation, as Mai goes her own way offstage, set to The Moon Song (from Spike Jonze’s film Her), leaving us emotionally affected by their fate.

Of all the works, NAKA is perhaps the most accessible one, with a very clear narrative and innovative staging that enhances and does not distract from the performance. Particularly exciting is how the translucent walls of the enclosure are effectively used to create visibility and obscure the dancers’ silhouettes, resulting in a powerful ending where we see Shou Yi mourning the absence of Mai as he reminisces his time with her ‘shadow’, concluding the performance on a sombre note.

Nice To Beat You by Gil Kerer & Korina Fraiman (Israel)

In the final Open Stage performance of the night, Gil Kere and Korina Fraiman perform as a couple in a chaotic relationship, escalating from an overly enthusiastic handshake, to violently tumbling and writhing across the stage while connected to each other. Playing on similar themes as Two-gather, Gil and Korina are trapped in what seems like a toxic, dependent relationship, where the couple can neither live with or without each other, simultaneously enjoying and despising their troubled relationship.

When Gil begins to lose control, all Korina has to do is put a leg on his shoulder to stop his convulsions, and together, the two perform intricate, intense floorwork, always connected and sharing an indisputable, intense bond. The two dancers become a beautiful mass of parts that make up this relationship, spurred on by their strong chemistry and intense intricacy of the choreography, resulting in a riveting performance that leaves one both terrified and fascinated by such a wild form of love.

Should I Kill Myself Or Have A Cup Of Coffee?

The night ended off with this year’s edition of DiverCity, featuring a new work by Singapore-based choreographers Chiew Peishan and Liu Wen-Chun, and dramaturged by Neo Kim Seng. Inspired by Albert Camus’ philosophy of ‘the Absurd’, Should I Kill Myself Or Have A Cup Of Coffee? is a multidisciplinary performance that sees dance meet and interact with film. In the performance, we are introduced to a surreal monochrome film by Taiwanese film artist Chen Yan-Hong, where we follow the everyday routines in the life of a girl constantly wearing a helmet. While seemingly ordinary, there are moments where the girl has violent dreams of her pet fish gasping for breath, or of finding herself drowning in the Singapore River.

The choreography itself acts as a response to this film, separate yet intricately linked to the projection onscreen. One sees performers Chew Peishan, Liu Wen-Chun, Supatchai Lappakornkul and Kenneth Tan as representing the state of mind helmet girl is going through as her thoughts manifest during the most mundane moments of her day. While helmet girl is asleep, her ‘dream’ takes the form of two people performing an intense dance with each other to Elton John and Bernie Taupin’s ‘I Think I’m Going to Kill Myself’, with Kenneth Tan acting as a ‘conductor’, pausing them at the most precarious of moments to correct their postures and stance as they remain perfectly perched and balanced. While helmet girl is in a queue, all four dancers too follow suit and form a queue, quickly degenerating into a series of violent shoving and tossing around as each person attempts to wrest control and dominance for themselves. The absurdities of the daily are thus manifested in the performance, as the dancers make real these dark fantasies, highlighting how helmet girl considers life’s pointlessness as she experiences a Thanatosian death drive the more time wears on.

Should I Kill Myself Or Have A Cup Of Coffee? is a darkly comic look at how the mundane of the everyday can become a source of frustration and despair, when all meaning or logic in life seems to have dissipated and we can no longer see colour around us. In its ending scenes, one is left questioning where reality ends and the fiction begins as the dancers turn to address the audience. Pressing the power button on a remote control, a dancer ends the performance as the lights fade into a blackout, and we can only wonder: “is life itself but a dream?”