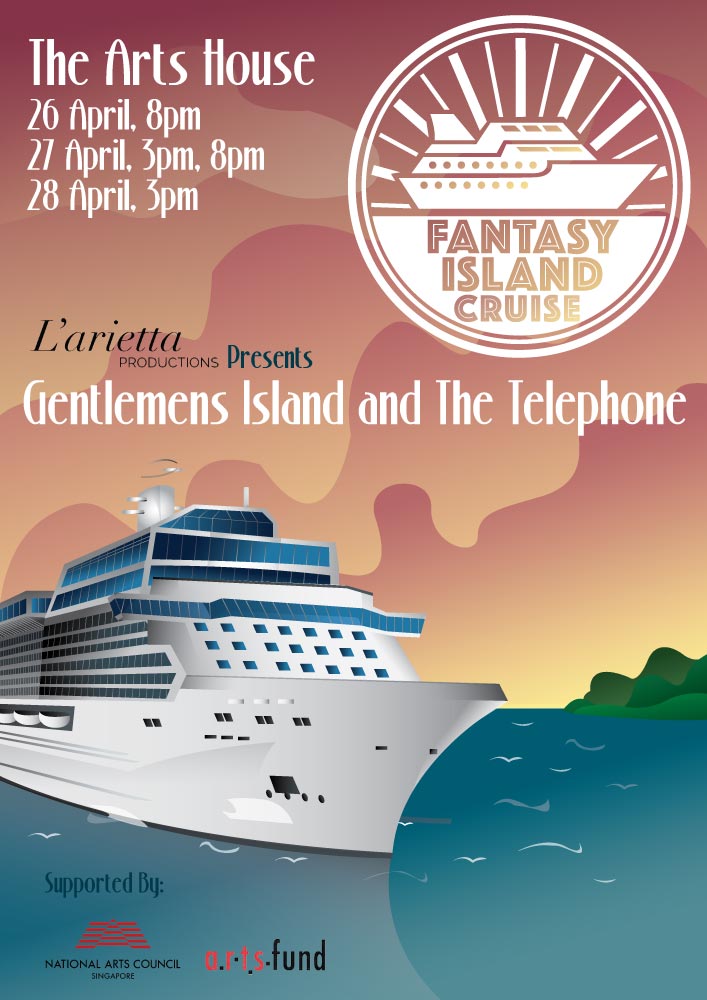 An operatic holiday from L’arietta.

In the grand scheme of modern opera, L’arietta Productions has time and again proven that the art form doesn’t have to be a stuffy affair, presenting accessible, fun operatic works of art onstage for both opera vets and newcomers to enjoy. With Fantasy Island Cruise, the company presents a double bill of light-hearted works, namely Joseph Horowitz’s Gentleman’s Island and Gian Carlo Menotti’s The Telephone, both directed by Richard Tan, with music directed by Aloysius Foong.

In Gentleman’s Island, two men (baritone Brent Allcock and tenor Leslie Tay) find themselves shipwrecked on a desert island. Victims to their own commitment to manners and social graces however, they refuse to talk to each other until they have been introduced by someone else, an impossible feat being the only two on the island. Leslie Tay is introduced with a picnic basket, while Brent comes onstage with a tattered umbrella, evidently bruised and battered after the shipwreck, highlighting the differences between the two characters. With both characters so contrasting, one more gentle and the other more brusque, both Leslie and Brent have a constantly fascinating onstage dynamic they play well off of each other. L’arietta has always paid great attention to precision and detail in their productions, with Leslie and Brent both delivering good enunciation in crisp, clear voices, making the production all the more enjoyable. 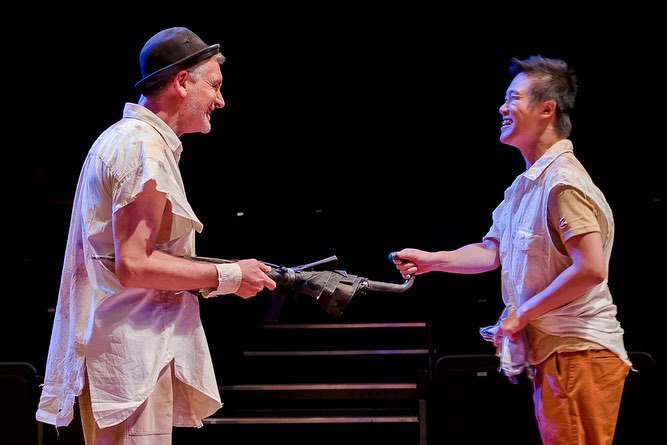 Director Richard Tan brings out the inherent humour in the piece by introducing a sense of cheek in their interactions – as much as they are aware of each other, there is a constant attempt not to even make eye contact with each other. With Brent expressing his love for oysters and Leslie his love for turtle soup, the two characters pining for their favourite foods immediately strikes a chord with the Singaporean audience, we immediately understand the deep-seated food cravings they have, with even the transformable set reflecting these gastronomic desires, able to go from desert island to turtle shell and oyster shell. 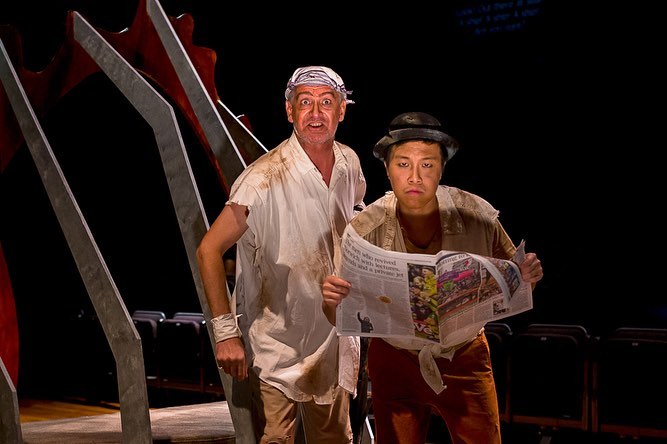 While they initially never address each other, it’s not until one mentions the name ‘Robinson’ in a song that, out of desperation, the other finally breaks the silence and attempt to bond by claiming recognition of this supposedly same Robinson they both know. The atmosphere becomes cordial once again, to the point where both men are able to do a little jig around the island singing Robinson’s name and finally get to know each other. Everything seems to be going well, complete with an incoming ship supposedly to save them. But upon realising the ship is filled with uniformed men, they fear being captured by these unknown personnel, and refuse help. Perhaps ironically, one of the men is apparently the fabled Robinson, and by realising that Robinson may in fact be an antagonist, leading to them both downplaying their friendship with him, as an awkward silence takes the place of conversation. What awaits these gents is only death by starvation as they relinquish Robinson, so quickly bringing them together yet tearing them apart soon after. 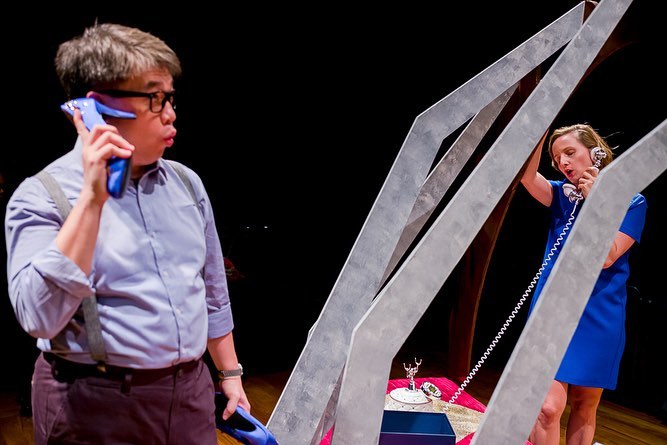 In The Telephone, the set now transforms into that of a living room, and we witness the gormless and bespectacled Ben (tenor Reuben Lai) coming into the living room, the character visibly nervous, while Lucy (soprano Lilith Verhelst) enters not long after, drawing our attention to the telephone on the table she cannot help but admire and remain fascinated by. As much as Ben wants to pop the question and ask Lucy for her love, time and time again the phone ends up interrupting their potential conversation, as Lucy is distracted by friends and even a wrong number as she sings her arias into the receiver, sharp and clear, yet cheeky and fun. Each time a number on the phone is pressed, pianist Aloysius Foong plays specific tunes on the piano for each number. Even the ringing gets its own set of trills to resemble actual ringing. 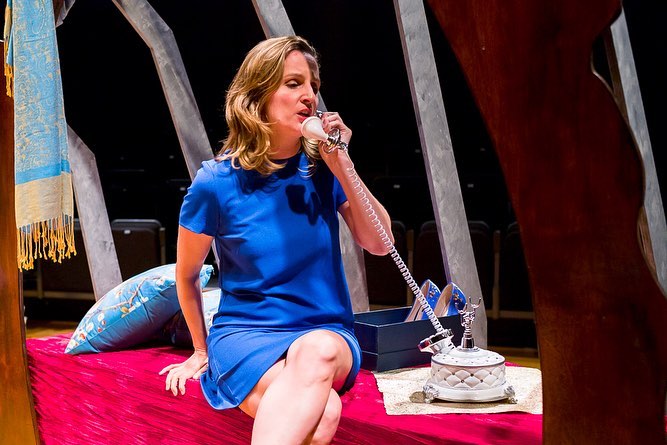 Naturally, Ben gets impatient before long, hilariously so as the phone rings at the most inopportune moments, just as he’s plucked up enough courage to finally open his mouth, in a case of one step forward two steps back. As Ben himself says, the telephone has hundreds of lives and miles of umbilical cord, impossible to find one’s way out of, and seemingly immortal, always ringing no matter how many times we hang up. At this stage, Ben has run out of time, rushing to catch his train before he’s too late, and ending the conversation prematurely. Reuben and Lilith both fully embody their roles, their onstage chemistry strong, and as audience members, we easily root for them as a couple we want to see get together by the end of the show.

As the saying goes, absence makes the heart grow fonder, and it is only when he leaves that Lucy finally admits her loneliness, leaving the crowd a few chuckles at her realisation. We hear the phone vibrate, and it’s Ben, calling from a mobile to reach her and finally find connection, not in real life but by the very thing that separated them in the first place – the phone. If you like it then you shoulda put a ring on it, referring both to the phone’s ringing and an actual engagement ring, and we see success as Lucy brandishes a new ring on her finger just before the final blackout.

Overall, Fantasy Island Cruise is a fun night out, presenting and cementing L’arietta’s aim of creating and producing accessible, likeable opera for audiences of any level. This was a well-selected, contrasting double bill of light-hearted works, one a sharp commentary on our dedication to rules and social graces and the other, a modern romance, and both giving each performer enough time and space to shine in their own right. Both reflecting the state of modern society, as relevant then as they still are now, we left the Arts House hearty, satisfied, and relaxed from our short but sweet holiday out.