Preview: Esplanade Presents – The Far Side of the Moon by Ex Machina/Robert Lepage 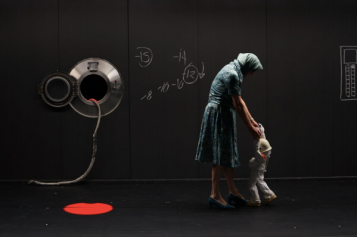 The Esplanade is set for one of their biggest productions of the year, as they present visionary Canadian theatre director Robert Lepage’s The Far Side of the Moon this November. Touching on a narrative set against the backdrop of the race to the moon between the Americans and the Russians, our story instead centres on Philippe, a struggling introverted philosopher, and his younger brother Andre, a successful TV weatherman -an estranged pair drawn together, coming to grips with the death of their mother.

Playing for just two days, The Far Side of the Moon premiered in Québec in 2000, and has since been presented in over 45 cities all around the world. In this production, critically acclaimed actor Yves Jacques will take centrestage in the solo show, promising a master work of poignant, visually stunning and technically exquisite storytelling that will grip you with its emotionally arresting exploration of both outer and inner space.

With Lepage’s company Ex Machina best known for its seamless integration of recorded arts with performance arts, bringing to life a multi-disciplinary, multi-media production each time, The Far Side of the Moon boldly goes where no theatre company has gone before. A maestro of modern theatre, Lepage’s works are transformative for both the individual and the scene, creating theatre even for people who don’t like theatre, and with The Far Side of the Moon, put audiences on a journey of cosmic proportions into the very soul of their being and back again.

The Far Side of the Moon plays at the Esplanade Theatre on 1st and 2nd November 2019. Tickets available from the Esplanade