An audacious celebration of the Singapore Bicentennial and our post-colonial hangups in true TNS fashion.

From the very moment the Singapore Bicentennial was announced, fiery controversy was sparked as the sheer audacity of such an event was called into question. After all, which country actually celebrates the anniversary of their colonisation? It is from this central question that The Necessary Stage’s newest production seems to be based upon, as Civilised dives deep into the difficult definitions, problems, and even future of colonialism in the world. 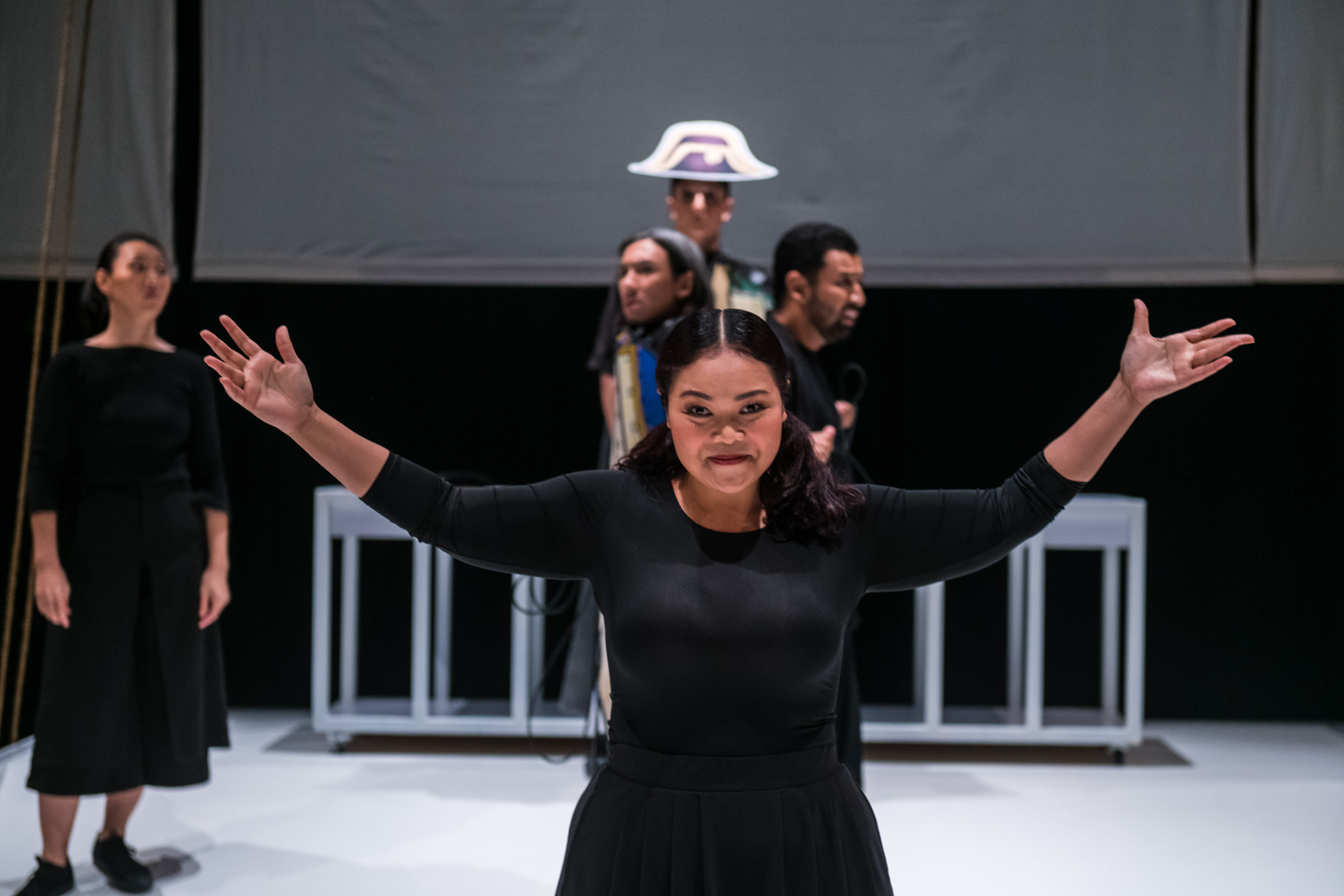 Directed by Alvin Tan and written by Haresh Sharma, Civilised is, if anything, one of The Necessary Stage’s loudest, most angry works to date. From the very beginning of the play, Civilised seems hell bent on positioning itself as a controversial, provocative production, as the cast (Edith Podesta, Ghafir Akbar, Koh Wan Ching, Lian Sutton and Siti Khalijah Zainal) emerges from the wings and begins arbitrarily dividing various phenomenon and paraphernalia into two hard and fast categories: ‘civilised’ or ‘uncivilised’. There is a strong sense of discomfort this act creates, not only due to the forceful way in which they categorise with such conviction, but because it feels as if they are imposing their ideas upon us without giving us a chance to say otherwise, itself an act of colonisation on our thoughts, setting the tone for the rest of the play. 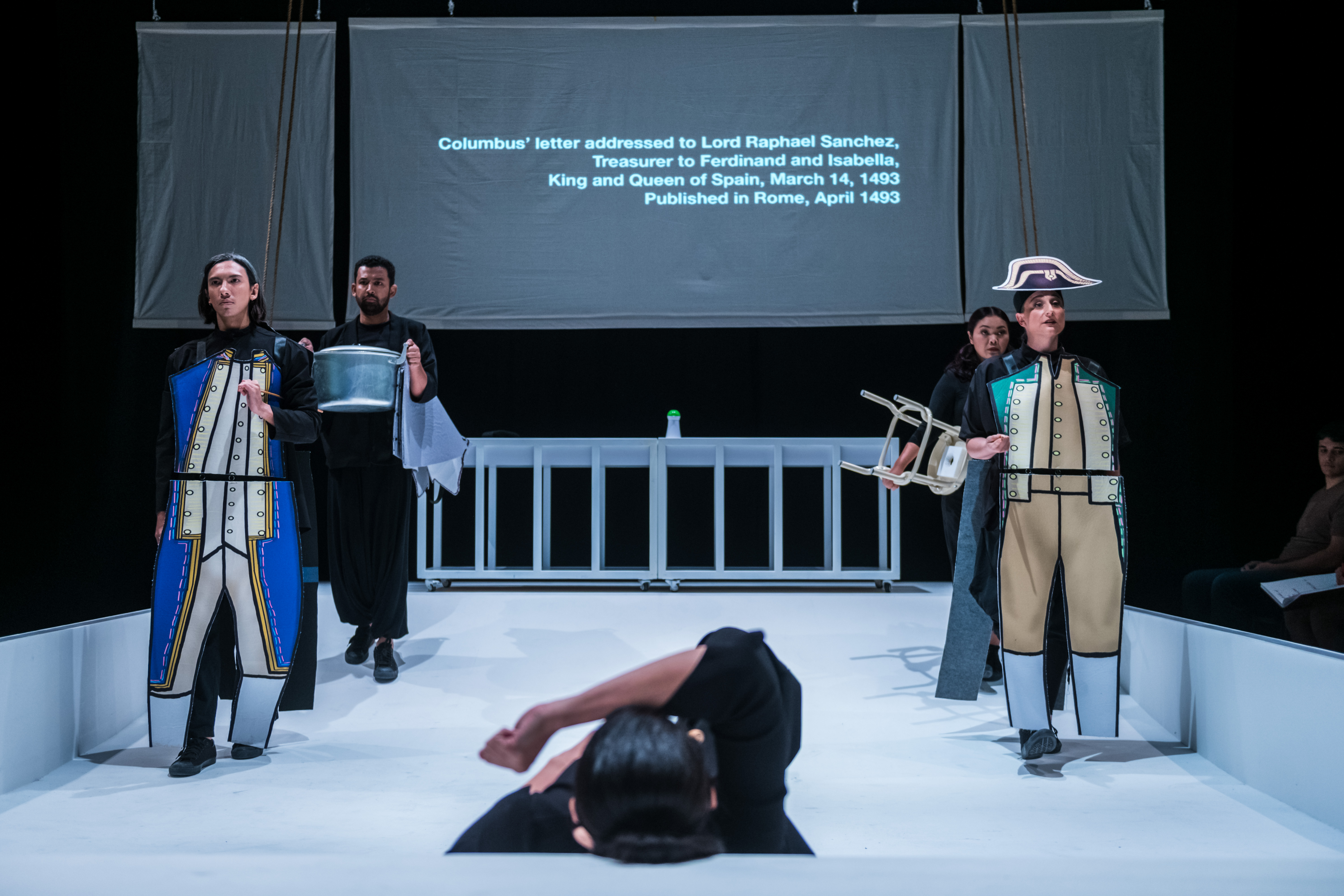 It is from here then, that the very idea of colonialism is problematised – what exactly counts as colonialism, is it necessarily something we should be actively opposing, and has its aftereffects unwittingly found their way into our subconscious, even today? The Necessary Stage does this through a madcap theatrical journey across time and space, completely eschewing the idea of a linear narrative to bring us sketches and snippets of colonialism from across history and around the world, from Christian missionaries attempting to introduce religion to the ‘barbarians’, to modern colonialism, where a personification of China annexes third world countries via debts and favour like a maniacal loan shark. 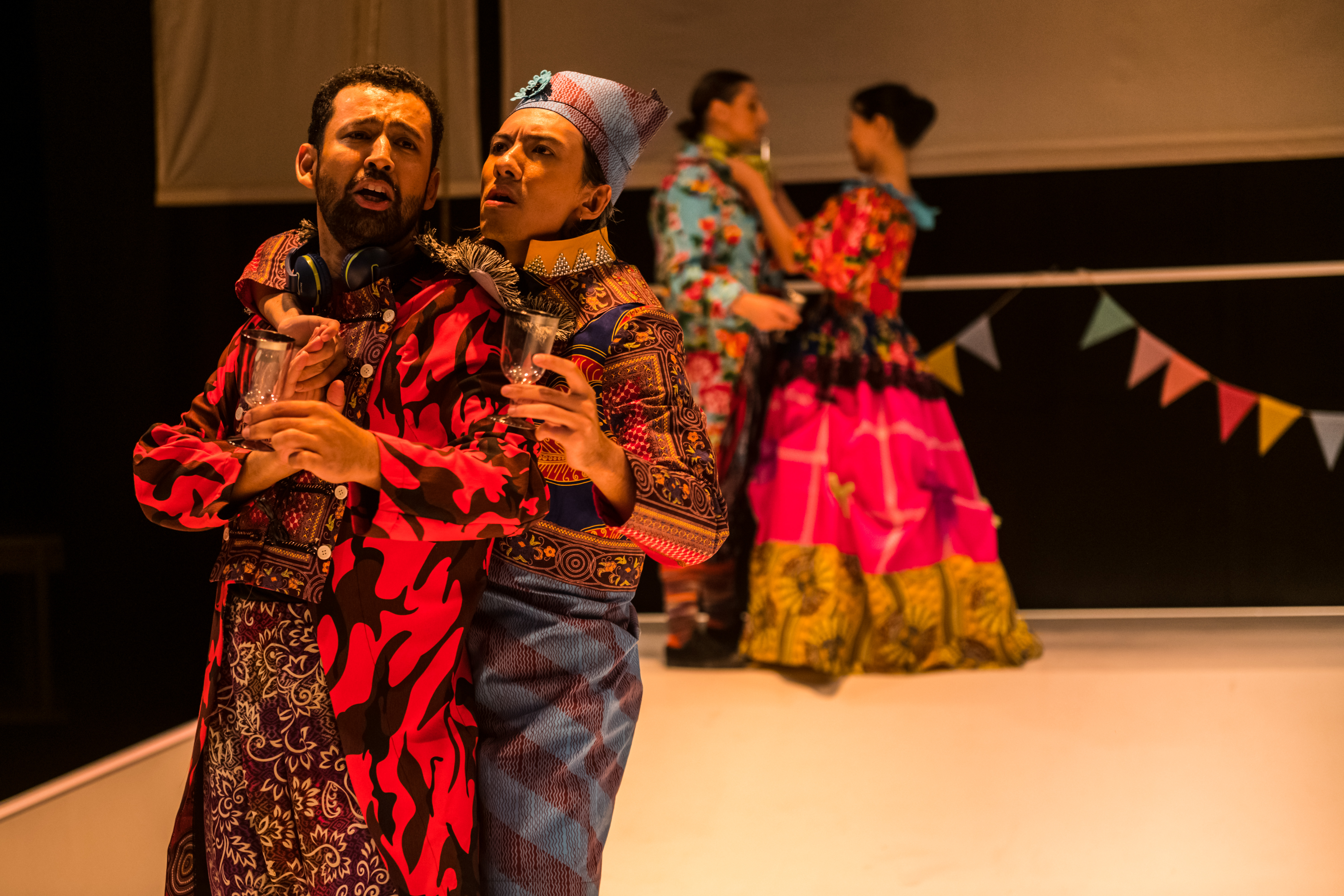 He Shuming’s non-sequitur video montages only add to the feverish delirium Civilised presents, combining rap music with footage of statues collapsing during revolutions, thematically contributing to the atmosphere of enforced order in opposition to unfettered instinct. It helps that The Necessary Stage Black Box has been set-up for maximum intimacy, dissolving perceived borders and allowing us to feel as if we are being directly addressed by the actors as we sit around Vincent Lim pure white set (itself a victim of ‘colonialism’ as the actors traipse up and down it and leaving scuff marks). Colourful, over the top costumes from MAX.TAN veer into the outrageous to further add to the almost absurd nature of the production, with appropriately garish gowns and suits to ridicule an entire segment dedicated to the National Museum of Singapore’s ill-conceived Empire Ball. 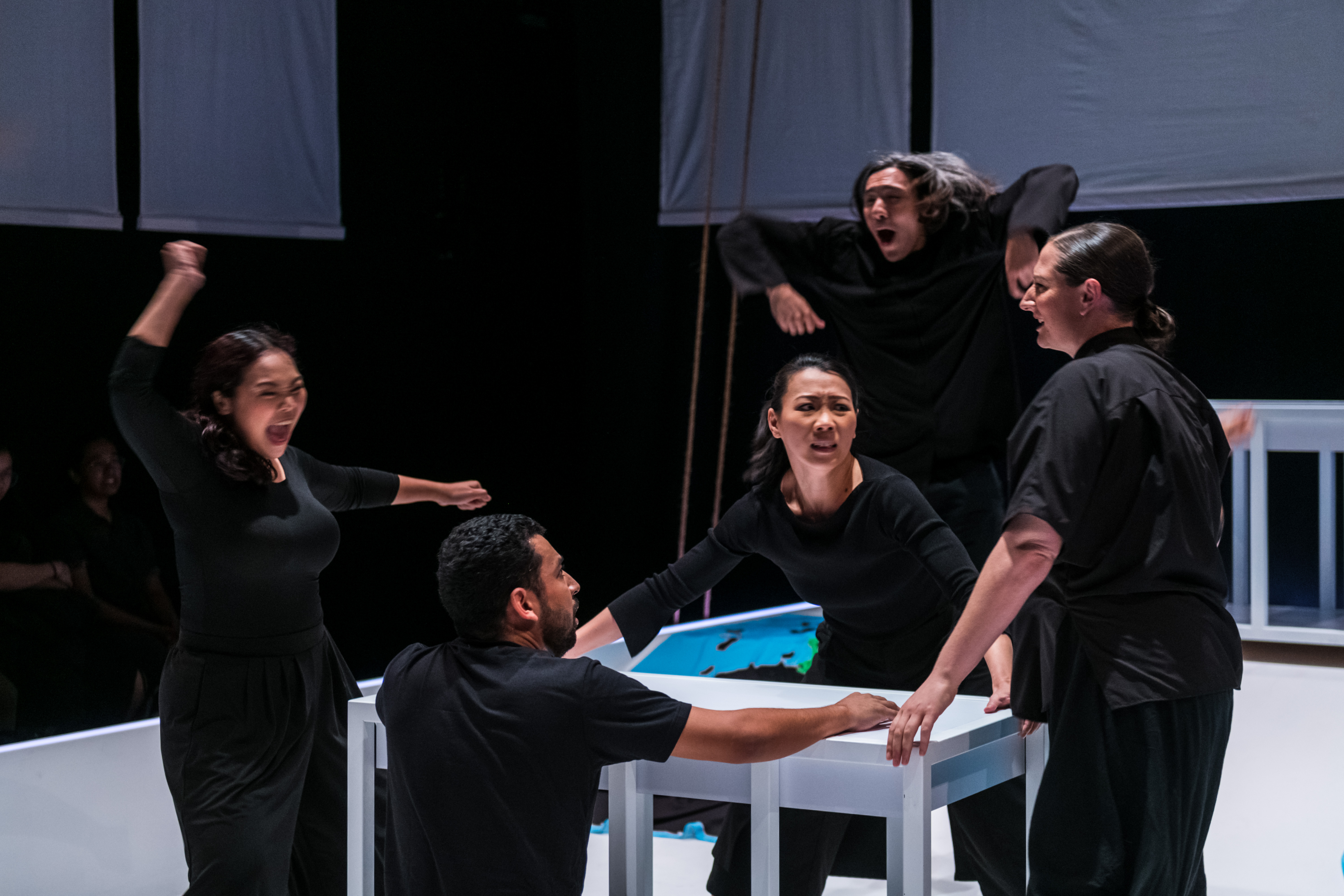 Over the course of the evening, we watch as white colonisers clothed in crudely drawn, cardboard overlays arrive on new found land to ‘tame’ the savage natives (dressed in ‘nude’ cardboard overlays), a fictitious Chinese re-education camp attempts to show how it is good for the people, or how a minority is stripped and presented as an exotic animal to be objectified and ridiculed. Time and time again, Civilised doubles back on itself, continually questioning the assumptions its own sketches raise, and whether such assumptions then throw our own interpretation of colonialism into question (by even using English, the language of the coloniser, are we still then playing into some kind of embedded colonialism?) 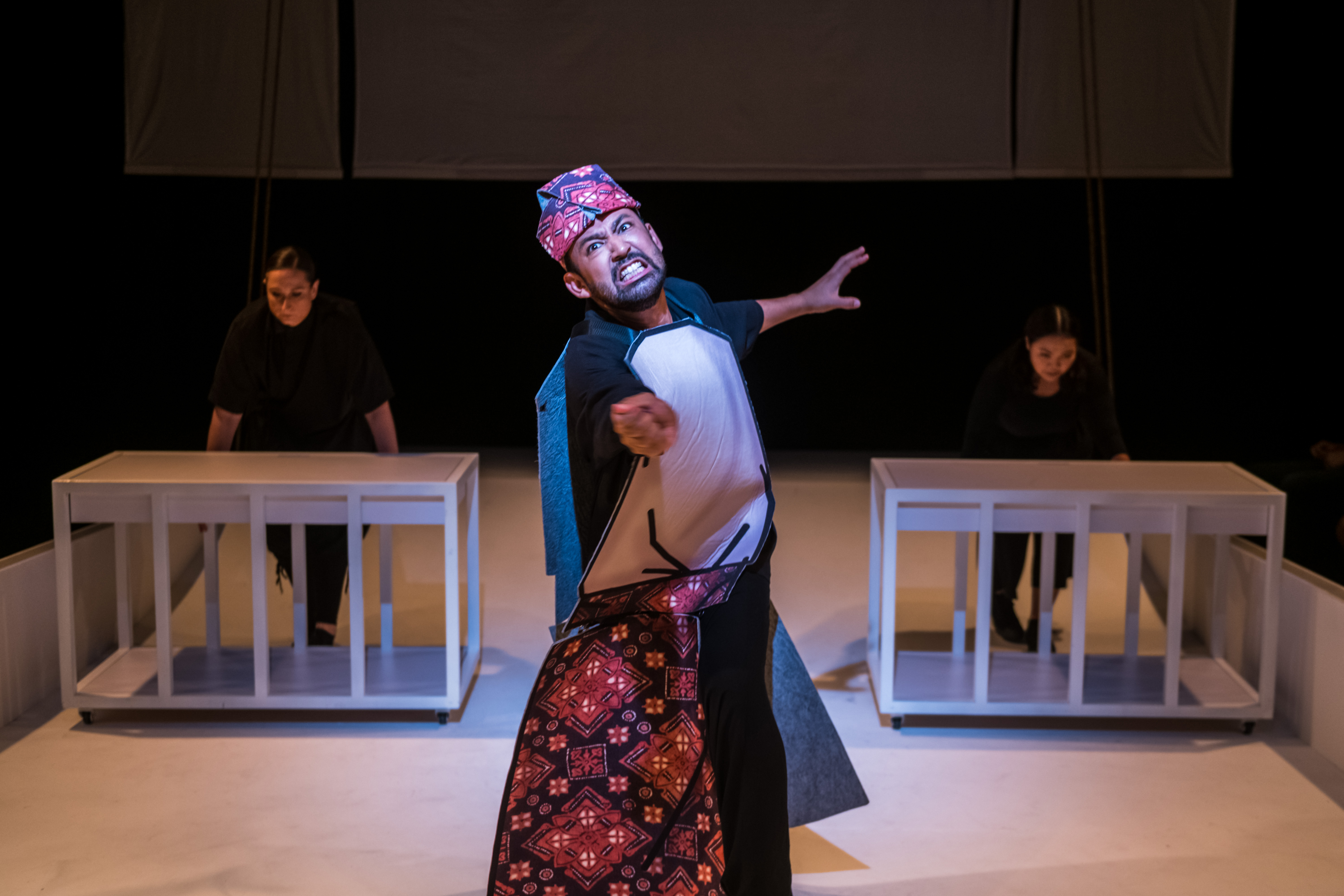 Yet, as seemingly complicated and wide-ranging as the ideas and theories raised in Civilised are, there is a strange logic and structure that strings the chaos and confusion together, helped by the manic energy exuded by the entire ensemble that underlies the entire performance, ensuring that audiences remain riveted and every surreal scenario lands with precision. Civilised moves from historical past to the global presence of colonialism today, to the future, reflecting on the violence and pain it evokes to consider how we can apply the lessons learnt for the inevitable time we finally achieve space travel and our treatment of other planets. There is the constant push towards both guilt and fear as both cast and audience grapple with the multi-faceted nature of such a contentious and ultimately, inconclusive topic, eventually understanding that as much as we speak out against it, colonialism is and always will be a part of our history, with no sense in denying our past. Perhaps it is all we can do to ensure that we secure the future, acknowledging that while we are left with scars, there may yet be the possibility of ‘responsible’ colonialism, not as masters, but as agents of cultural exchange and mutual learning. 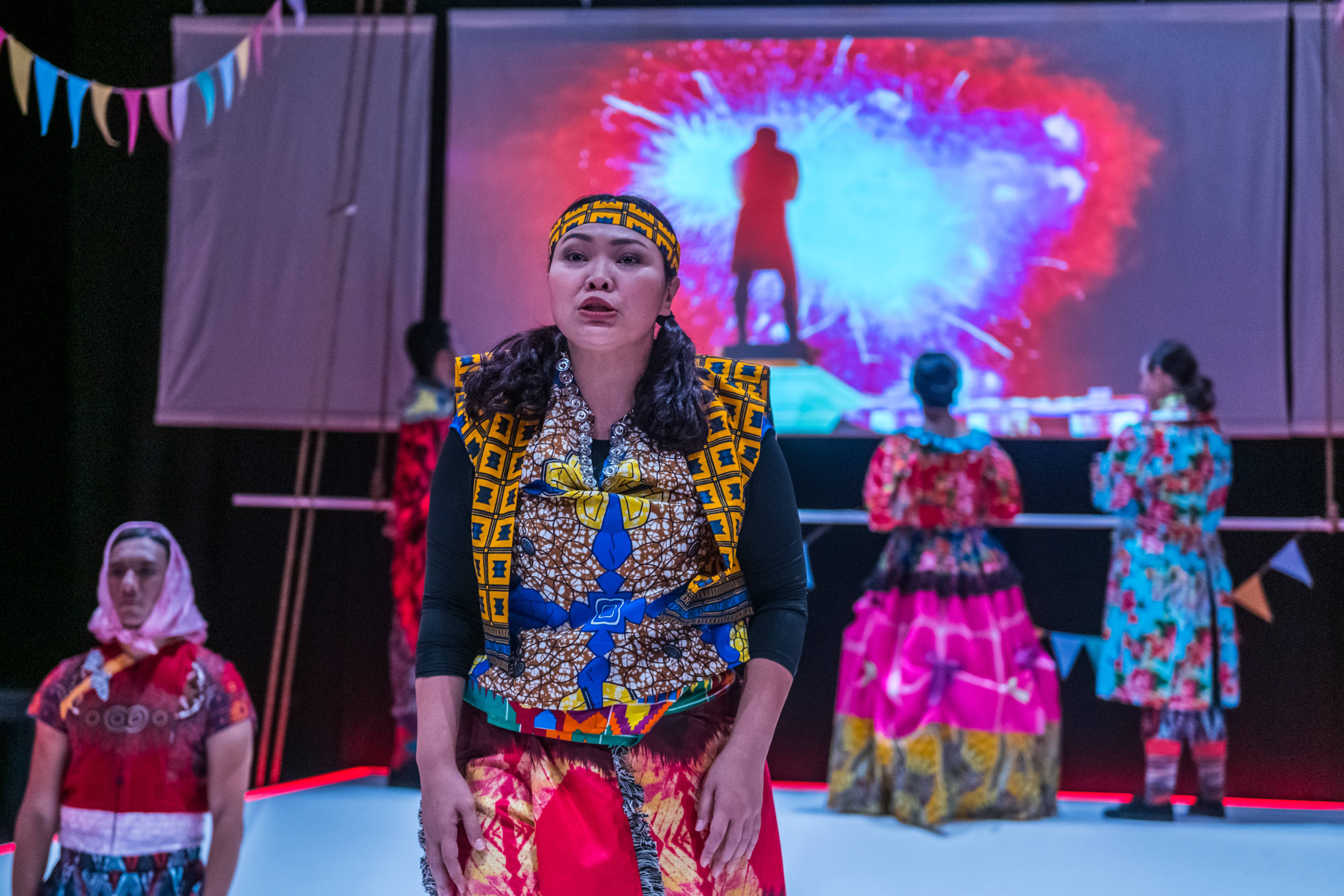 In an utter stroke of genius however, Civilised ultimately chooses not to go down the happy ending route, and instead, subverts its very premise to turn the tables on Singapore itself. Using colonialism as a lens by which to examine our modern day situation, we are led to realise how we continue to be subject to new forms of ideological slavery, where the modern colonial masters are no longer as obviously identified by the colour of their skin, but far more insidious, lurking amongst the people we call our own to suppress and make us in their image. It’s a chilling note to end on as we are left think back once again on what we consider ‘civilised’ or ‘uncivilised’, and whether even these thoughts have somehow been shaped by a greater force we are not in control of. 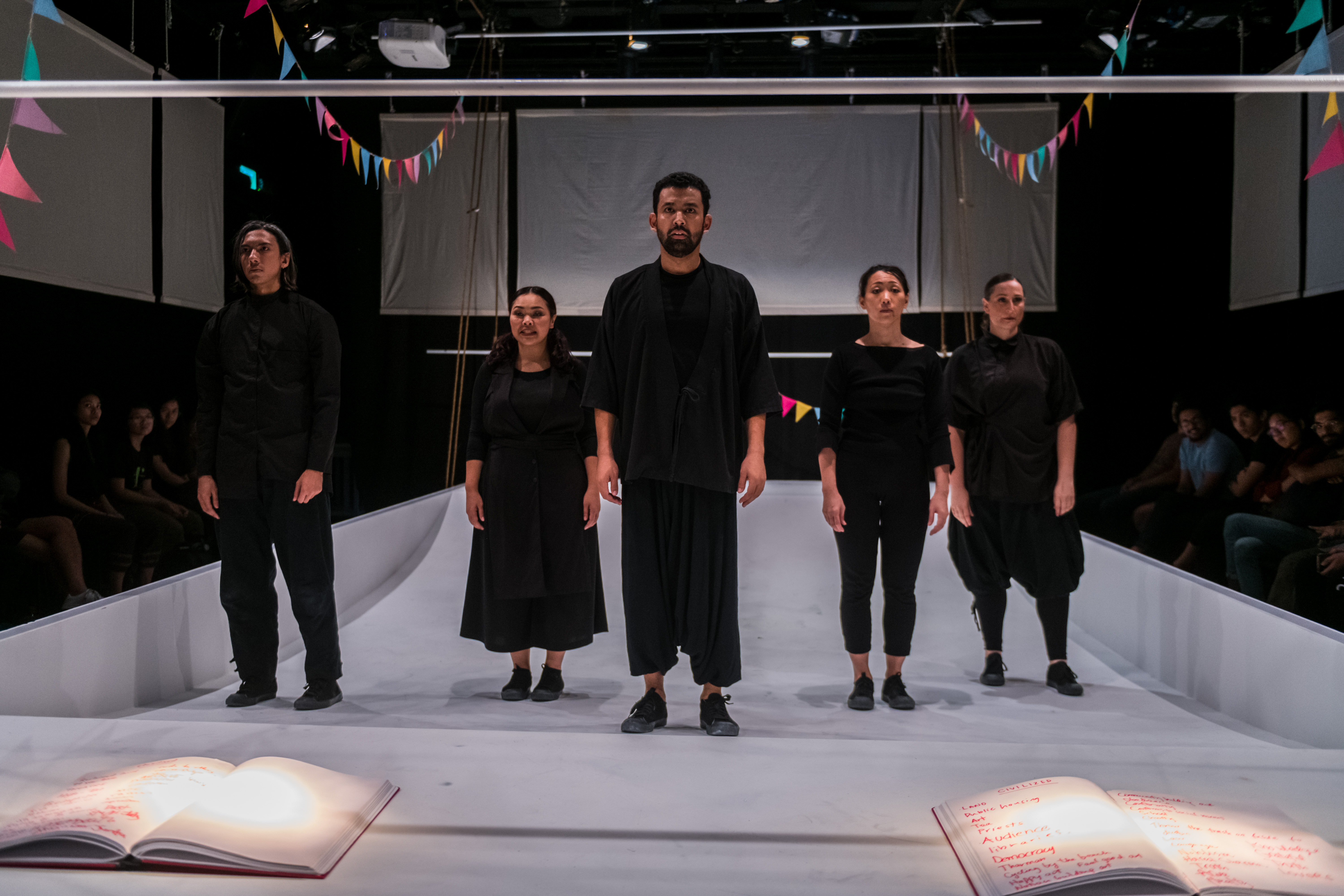 For The Necessary Stage to have moulded the thorny, complicated subject of colonialism into a visionary production, dissecting, studying and re-appropriating the term is nothing short of absolute artistry. By its end, against the backdrop of the statue of Sir Stamford Raffles gazing out at fireworks bursting over Marina Bay Sands, Civilised raises its voice and points an accusatory finger at both our historical and modern colonial masters, questioning when we will finally, truly be independent while we continue to live with our post-colonial hang-ups day after day. Civilised is the anti-bicentennial reflection we’ve been waiting for, casting a harsh light on our past 700 years of history, daring to go against the status quo to rip the band-aid off, and reveal the countless flaws and cracks hidden underneath the clean, porcelain image of Singapore we desperately try to maintain.

Civilised plays at The Necessary Stage Black Box from 15th to 26th May 2019. Tickets are SOLD OUT.