A 1922 Austrian opera may seem like it has little to do with Singapore in 2019, but with The Opera People’s Dwarf, there may be more similarities than meets the eye. While the original Der Zwerg closely followed its Wildean source material The Infantata’s Birthday, where a Spanish Infantata (princess) receives a dwarf for her birthday, only to drive him to suicide upon rejecting his love, Dwarf takes on a far more meta-theatrical approach.

Directed by Edith Podesta, Dwarf reframes Der Zwerg and sets it in an unnamed private elite girls school, ruled by only the wealthiest of students. As the students attempt to mount a production based on The Infantata’s Birthday, Clara, in the lead role of the Infantata, has taken a fancy to a public school student from a poorer background. Naturally, this leads to a fit of jealousy from her director Estoban, with whom she is romantically involved. As Estoban invites this student to audition for the role of the Dwarf, little does the student know that a cruel joke and tragedy is about to befall him the moment he steps foot into the lion’s den of a school.

From the moment one steps into the Esplanade Annexe Studio, one sees the massive 34 piece orchestra from The Musician’s Initiative, always within view of the audience. Led by Alvin Seville Arumugam, it certainly isn’t an easy task to get all 34 musicians together to rehearse, proving that The Opera People are entirely committed to their goal of crafting a quality opera backed up by the full range of music to bring Zemlinsky’s score to life. In particular, the string ensemble is featured prominently during the show, and even rarely seen instruments such as the harp (played by Charity Kiew) and the celesta (played by Marc Yeo) are brought on board, showing how The Opera People respect their musicians just as much as they do their star singers onstage, allowing them to stand out but never overpower the singing. 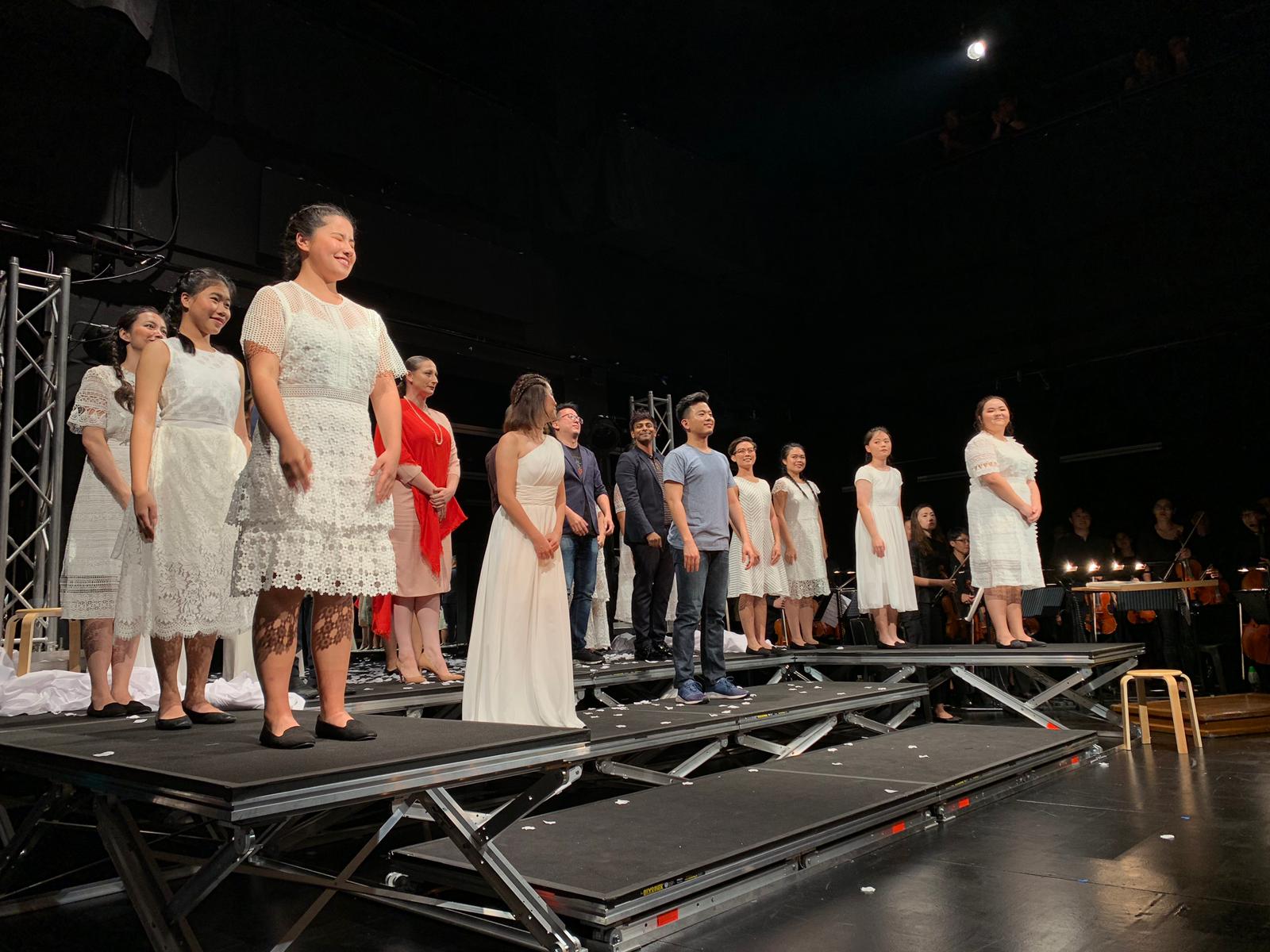 As Dwarf begins, we are easily immersed into the elite setting the opera has been reframed in, with a group of giggling school girls armed with shopping bags bearing brand names from Burberry to Chanel. As they skip onstage, we notice how even the second floor of the studio is utilised, with other ‘students’ peering down at the elites, covetous and fascinated, like excited students looking over a parapet. While the Annexe Studio isn’t the largest of spaces, The Opera People have ‘expanded’ the space with mirrors at the back of the stage, to give it a larger than life effect by creating the illusion of depth and size of an actual institution.

Donning pigtails and knee-high socks, each student was the very image of a classy, prim and proper schoolgirl, each brimming with youthful, teenage energy. One is inexplicably reminded of high school films like Mean Girls as we watch the main students form a sisterhood of a sorts, and certainly, the reigning clique of the school. Comprising queen bee Clara (Felicia Teo Kaixin), along with her gaggles of ‘ladies’ (Moira Loh, Phoebe Chee and Priscilla Fong), the performers certainly knew how to put Clara on a pedestal and almost ‘worship’ her, with good layering of both the orchestral music and operatic singing to really bring the story out. 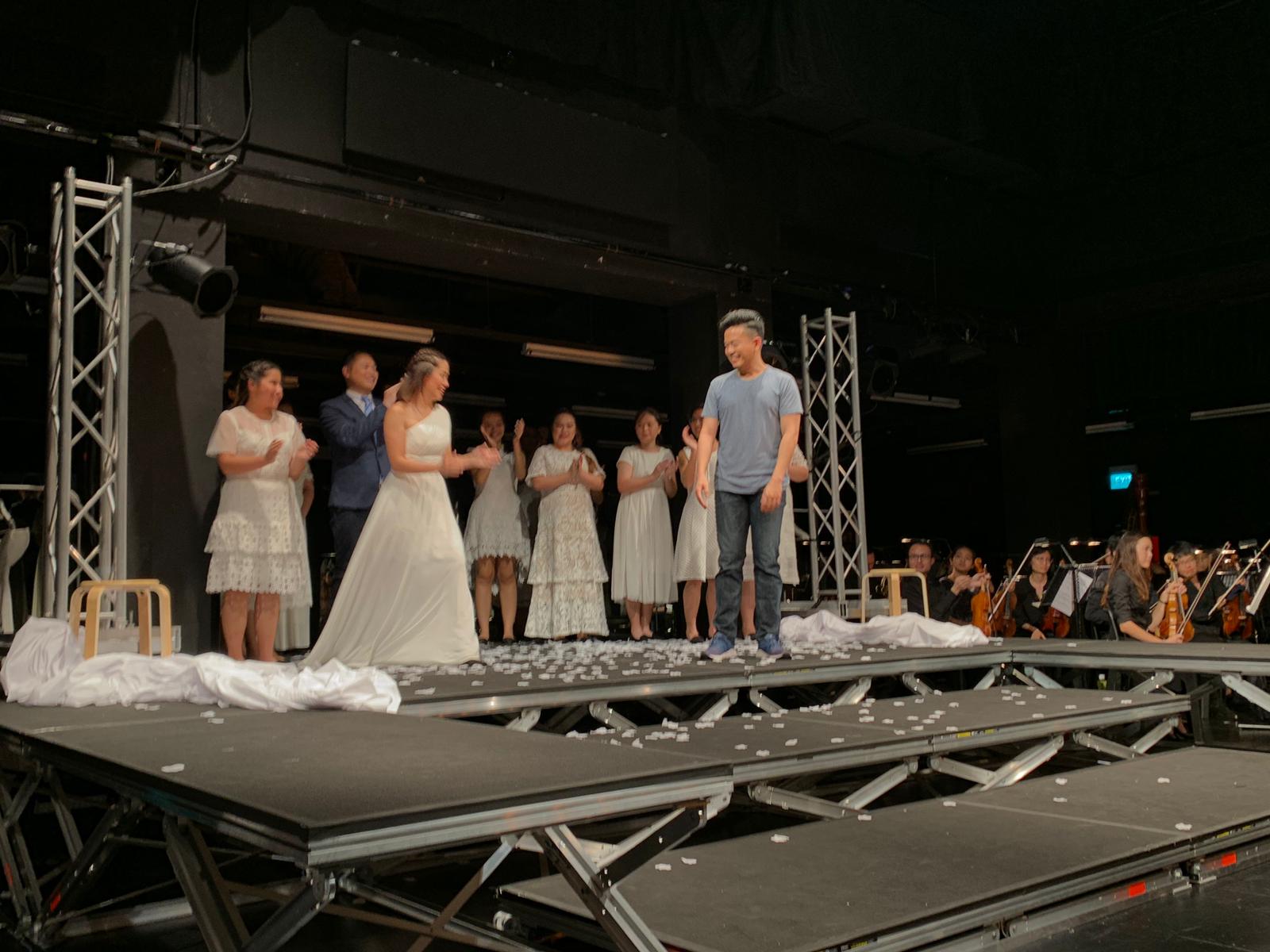 As Clara, Felicia Teo Kaixin possesses a strong presence and commands attention with a single order, as her subjects flock to hang on to her every word. It is to The Opera People and director Edith Podesta’s credit that Dwarf features a range of performers to showcase diversity across the school, and prove that each and every one of their voices can be distinguished and heard even when they sing together.

Contrasting the excited schoolgirls, baritone Alvin Tan, as Estoban, immediately gives off antagonist vibes from the moment he swaggers onto stage, establishing his character with a single look. As the director of the play-within-a-play, it’s easy to tell when the students are playing characters, a ridiculous, over-the-top sequence that makes us laugh out loud with the ludicrous nature of it all. As the ‘dwarf’ (David Charles Tay) arrives, dressed simply in a polo shirt, jeans and sports shoes, there is an air of fascination that the entire cast gives off, much like how students naturally gawp when a new, foreign face is in their midst. This is perfectly understandable, with a new male student arriving at a hormonally-charged all-girls school, certainly, a feeling many audience members would be able to relate to from their own school days. For the most part performing on his knees as the dwarf, moving around on them while still singing, this only goes to show David Charles Tay’s total commitment to the role and allowing audiences to believe in this fantasy as well.

David Charles Tay and Felicia Teo show off strong onstage chemistry in their scenes together, almost mythic in the way they interacted (helped by the string ensemble). It takes a certain level of training for a singer’s voice to rise and float above a chorus’, and David did just that as he sang above the group of girls’ as they sang in unison, enunciating his words loud and clear and making it clear how he was an underdog we ought to be rooting for, one we wish Clara would see beyond his circumstances and love for who he is. 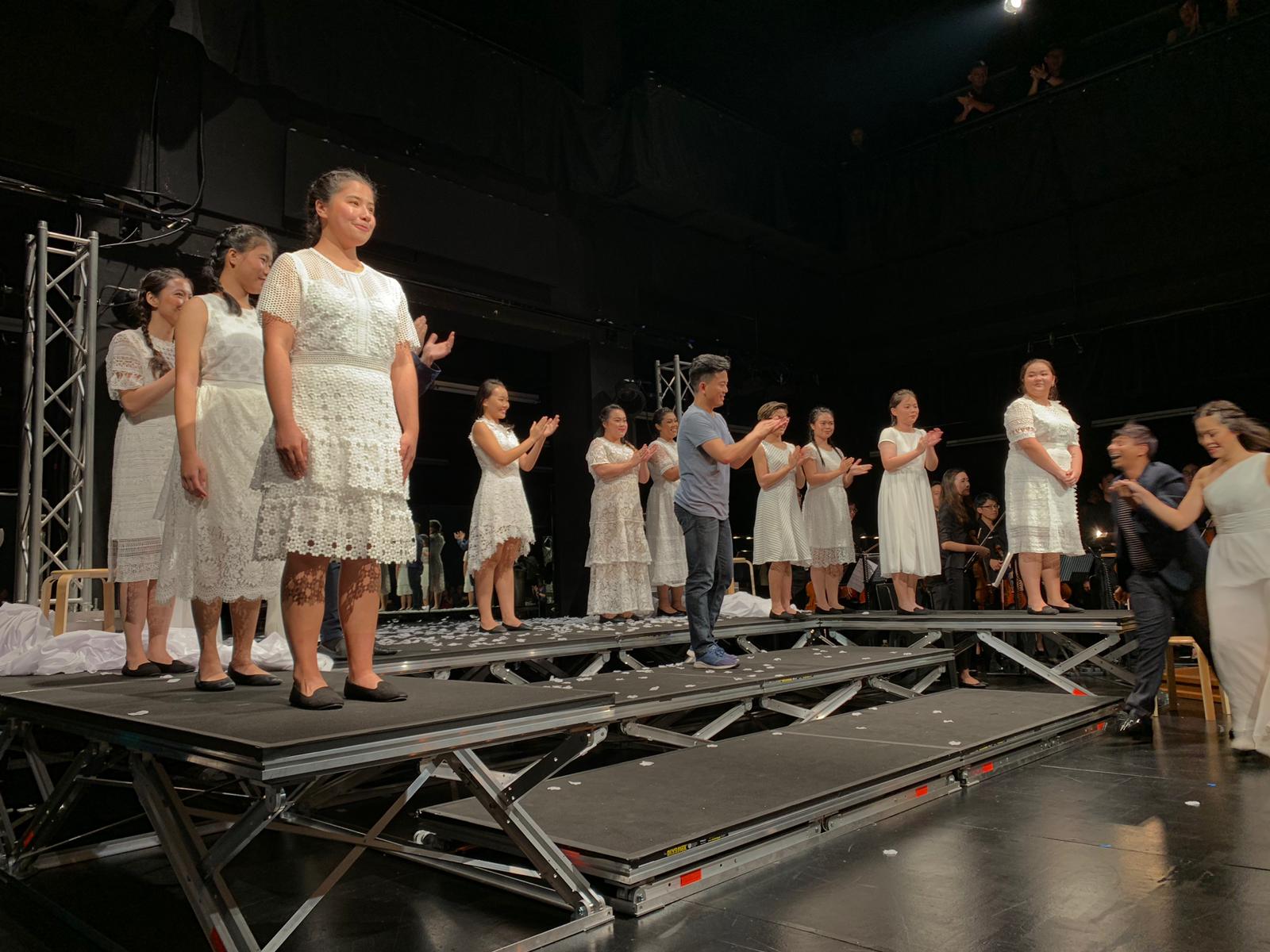 In contrast, the chemistry between David Charles Tay and Ng Jingyun, who plays Ghita, a poor student on scholarship in the elite school, is similar in scale but entirely different in reason. While his relation with Felicia as Clara feels far more rooted in adulation and adoration, there is a level ground and common understanding with Jingyun, given that both the dwarf and Ghita comes from similar underprivileged backgrounds, bonding over their similar circumstances. Both relationships are keenly felt, the contrast between them evident and well-teased out by Edith’s direction.

In addition, the timing of the performers is impeccable, and each performer’s abilities are elevated and spotlighted with Edith’s direction, every emotion felt in every movement. As Felicia turns and looks away nonchalantly, we practically feel her aloofness spread through the entire audience body, as she seats high up on a pedestal and exudes entitlement.

As we reach the conclusion of the opera, David as the dwarf performs a solo that only ends with doubt in his eyes, constantly questioning ‘what if’ his circumstances were different – would he then have stood even the sliver of a chance with Clara? As he is verbally beaten down by the students, it is made clear that the disparity between him and Clara is far too much to bear, a dream made impossible by tight social ‘rules’. 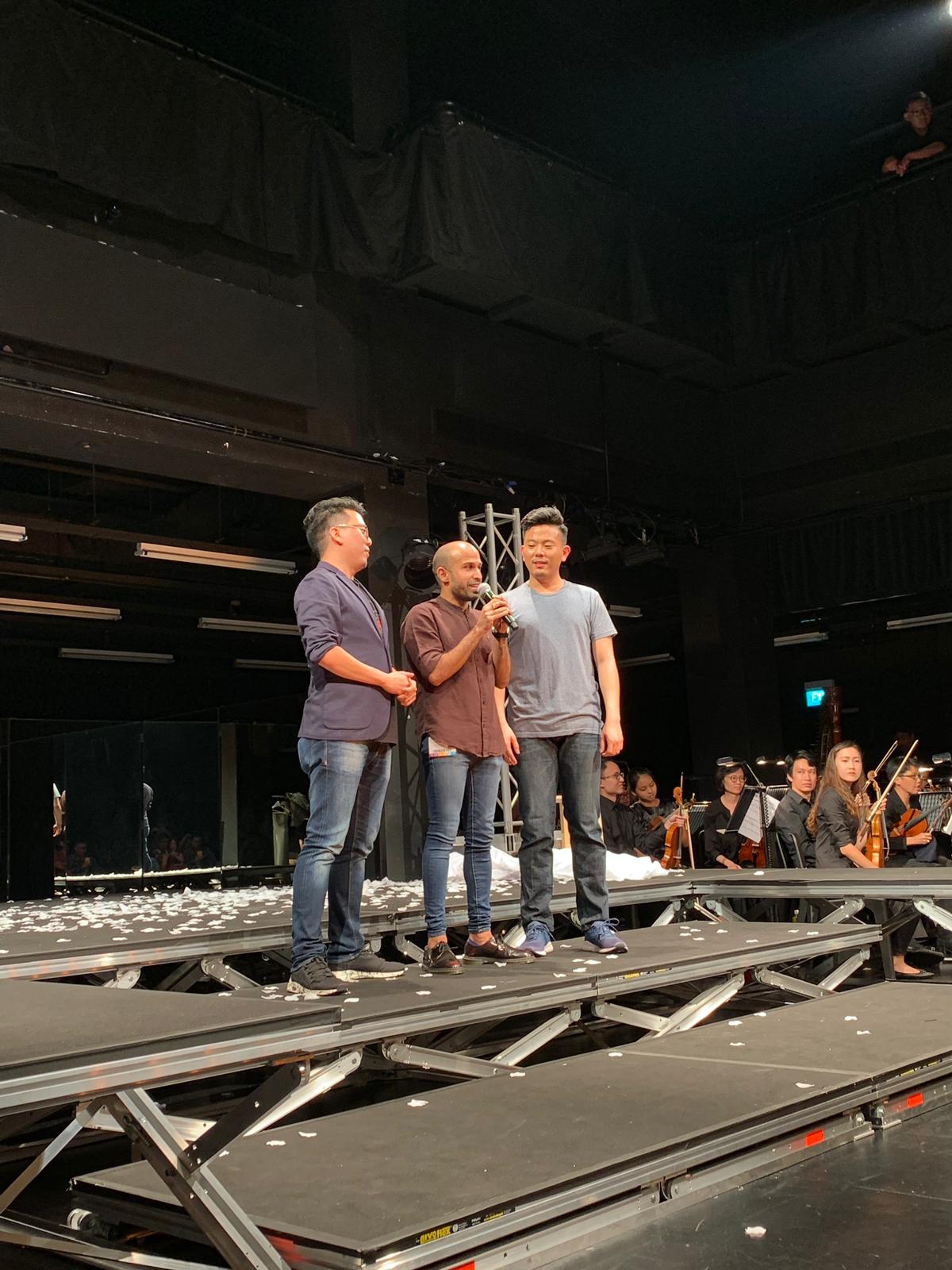 Dwarf is in no way an easy piece to perform, with plenty of lines for each character and a tricky score. But thanks to good direction, good musical direction and strong performances all around, The Opera People’s commitment and energy allow this new version of Zemlinsky’s opera to stunningly be brought to life. Dwarf is then elevated and made fresh and relevant for a modern audience, an important, courageous work that highlights the continued prejudices in today’s social landscape, and proof that The Opera People is once again raising the bar in the local opera scene. We end Dwarf on a sombre note, with David as the dwarf desperate for some kind of validation of his worth in the world, a stark image that no doubt strikes an emotional chord with any and all audience members who’ve ever doubted their own life’s value, and a powerful, sobering call to change the cruel way we judge others.

Dwarf plays on 12th and 14th July 2019 at the Esplanade Annexe Studio. Tickets available from Peatix

3 comments on “Review: Dwarf by The Opera People”