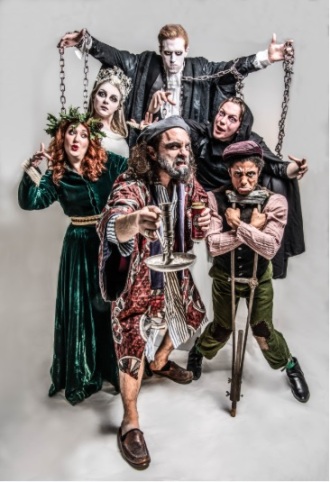 Combining cast members from the hilarious Sh!t-faced Showtime and Sh!t-faced Shakespeare for the first time ever, A Pissedmas Carol is the all singing, all drinking alternative Christmas knees-up you never knew you wanted. Parodying Dickens’ Yuletide classic A Christmas Carol, see miserly Scrooge and his classic coterie of employees, relatives and ghosts travel through time having the night of his life – past, present and future. But will Scrooge be merry before the end? Or will it be the spirits that have had too many spirits? With one genuinely drunk cast member in every performance, A Pissedmas Carol is the ultimate “You’ll never guess what happened to me last night” story.

The way it works is simple – each performance has a cast of actors, who all arrive 4 hours before the start of the show for a ‘party’. However this party is dry for all but one performer, who gets Sh!t-faced. The rest is a balancing act between the songs as they appear in the sheet music and the improv rules, which state you must go with WHATEVER the drunk actor decides to do. Every single show is a one-off performance and different, with how every single performance has a different drunk actor. Every single time they are genuinely inebriated.

Formed in 2010, Magnificent Bastard Productions were just friends who loved creating unexpected and unpredictable theatre at music festivals such as Secret Garden Party. Sh!t-faced now performs across the UK, USA and Australia, and frequently sell-out at the Edinburgh and Brighton Fringes annually, and in 2015 expanded into Sh!t-faced Showtime. A Pissedmas Carol will be directed by Katy Baker, with a script by David Ellis, musical direction by Nick Moore, and a cast comprising Katy Baker, James Murfitt, John Mitton, Issy Wroe Wright, Hal Hillman, David Ellis and more to be announced.

Says producer and performer James Murfitt said ‘This yuletide crossing the streams has never been more exciting. For the first time we’ll be combining the individual talents of Showtime and Shakespeare to create a spirit soaked musical Spooktacular, uniting fans of both shows for more Christmas revalry and debauched drunkenness than Tiny Tim can shake a crutch at! Bar. Rum, Glug.’

A Pissedmas Carol plays from 20th November 2019 to 5th January 2020 at the Leicester Square Theatre. For tickets, visit their website here