Francophiles rejoice – the 2019 edition of the Voilah! France Singapore Festival is here this October and November with an unprecedented number of programme presenters (over 100) as they pay tribute to the long-lasting partnership between France and Singapore.

France and Singapore have maintained strong inter-country relations for a long time, with several new milestones hit this year, including the 20th anniversary of the French Double Degree Programme – the longest running academic collaboration between France and Singapore, the 30th anniversary of cooperation in heritage, 35th edition of French Film Festival, 70th anniversary of the Alliance Française in Singapore and 200 years of cooperation in natural history since two French naturalists – Pierre-Médard Diard and Alfred Duvaucel – accompanied Sir Stamford Raffles on his landing in Singapore in 1819.

This year, the festival has announced veteran stage and screen actress, Janice Koh as the patron for the festival. Known as a star of Crazy Rich Asians, Janice has also starred in The Reunification of the Two Koreas, a 2018 co-production between TheatreWorks Singapore and the Centre Dramatique National de Tours which played by in Singapore and France. Says Janice: “Having had the privilege of working in a production that involved both Singaporean and French partners, I have personally experienced how cultural collaboration can provide valuable platforms for dialogue and exchange, and ultimately help in bridging different communities. I look forward to the exciting programmes that have been put together for Voilah! 2019, and hope it will encourage more creative and synergistic partnerships, while celebrating the best of France and Singapore.”

Voilah! 2019 presents over 50 programmes spanning culture, education, science, lifestyle, tourism, to sport, each one co-produced by a local partner. Opening the festival will be the Singapore Symphony Orchestra as they bring in superstar cellist, Gautier Capuçon will play with the Singapore Symphony Orchestra in a one-night-only performance that explores the impassioned Schumann Cello Concerto, as helmed by internationally celebrated master conductor, Vladimir Ashkenazy. The SSO will also be presenting a performance in the form of French Connections, featuring Fauré’s elegant Piano Quartet and Ravel’s well-known miniature harp concerto played in its original chamber form. 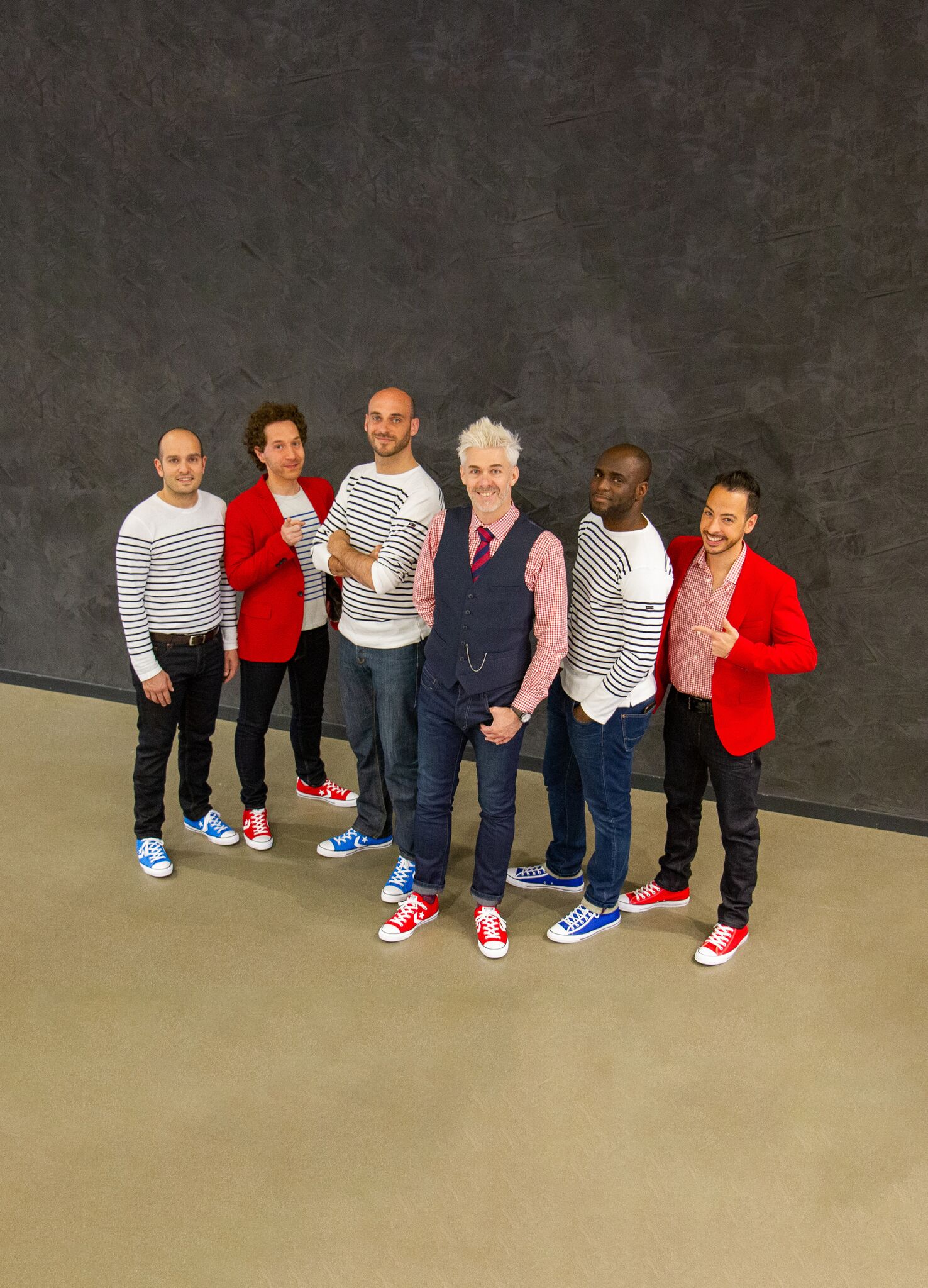 Other musically-inclined encounters include Opus Jam, a sextet from France who will showcase a unique spin on a capella singing combining polyphony and a touch of humour; as well as the staging of a three-centuries-old opera ballet Les Éléments performed by Les Surprises – a French partner ensemble of the local academy of baroque music, Sing’Baroque.

An enthralling life show comes in the form of The Bear’s Mouth. Happening at and presented by Gardens by the Bay, this visual spectacle by French performance group Cie Remue-Ménage will captivate audiences through a whimsical parade made up of a hoard of illuminated bears moving in synchrony with extravagant dancers. At the Miaja Gallery, get ready for an immersive, genre-breaking dance show as Fourth Wall: Duets brings classical ballet and contemporary dance and breaks the 4th wall for audiences.

In a nod to The Singapore Bicentennial, French artist Julien Nonnon will also present Revisiting Diard and Duvaucel to create digital artworks that illuminate the buildings and facades along Armenian Street, capturing the attention of visitors through a carefully considered mix of mythology and reality. The projections are inspired by drawings made by two French naturalists Pierre-Médard Diard and Alfred Duvaucel that accompanied Sir Stamford Raffles during his arrival in Singapore. These valuable drawings will also be displayed at the National Museum of Singapore’s bicentennial-themed exhibition, An Old New World, and have also been featured in a book about the French contribution to Singapore’s natural history that will be launched as part of the festival by the Lee Kong Chian Natural History Museum.

Additionally, Voilah! 2019 will also be happening concurrently with the long-running French Film Festival, including it into the programme with over 25 movies fresh from the French box office. Presented by the Embassy of France, in collaboration with local distributors and partners (Shaw Organisation, Alliance Française, The Projector, People’s Association, French School Singapore), the longest-run foreign film festival in Singapore will take place from 4th to 17th November. Films include comedies like Made in China and The Shiny Shrimps, romances such as Someone Somewhere and Love at Second Sight, and dramas like Paper Flags and The Specials. 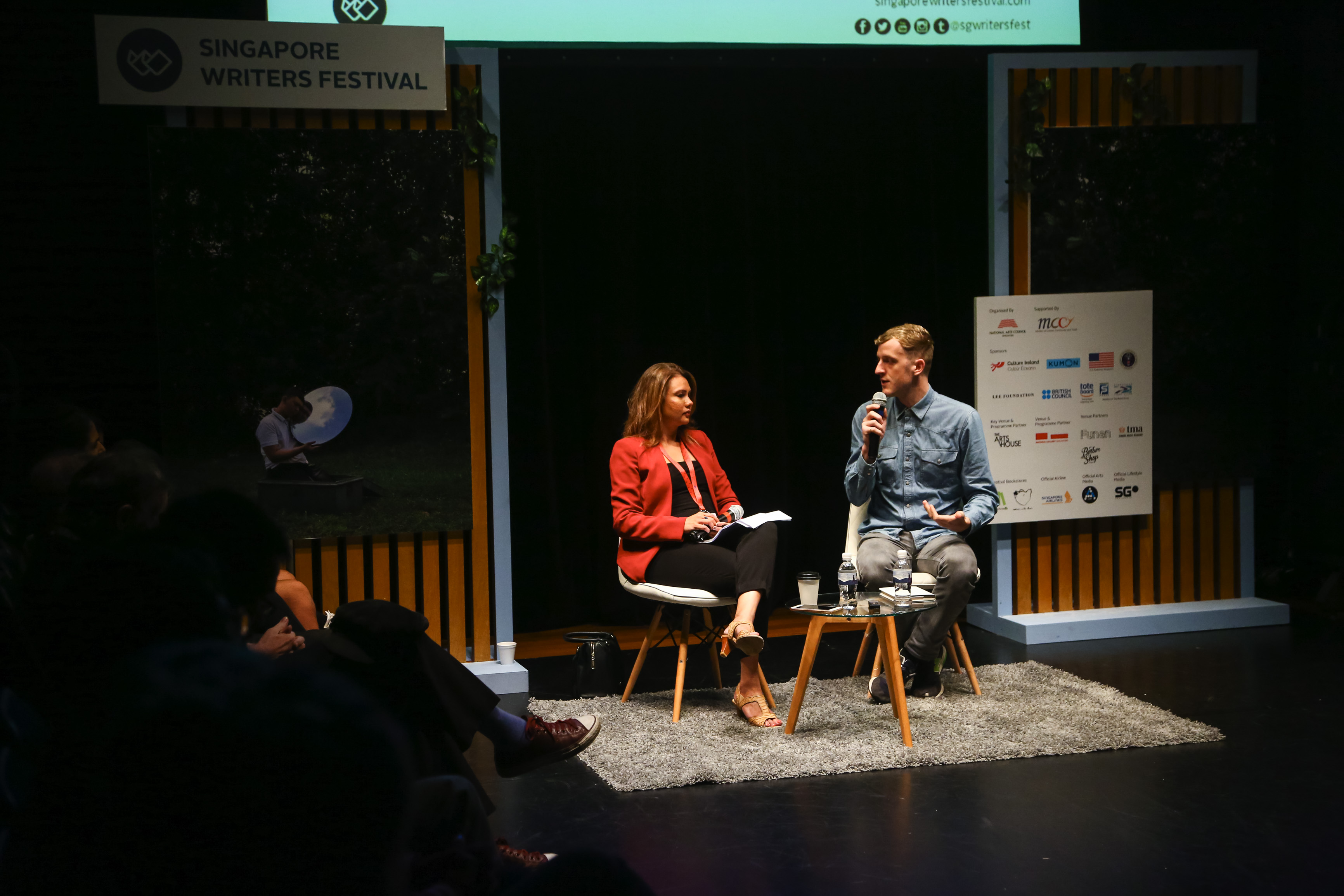 Voilah! 2019 also presents programmes about cultural and perspective exchanges between France and Singapore, with the inclusion of four Francophone writers at the annual Singapore Writers Festival to share their perspectives on the role of language in the formation of identities and communities.

Plus, Voilah! also includes several exhibitions that serves as a platform to present novel perspectives of the way we view our world and society. One such exhibition is NO TASTE FOR BAD TASTE at the National Design Centre, as it presents some 40 design masterpieces from renowned design maestros like Philippe Starck and Jean-Paul Gaultier. A panel discussion exploring the links and bridges between Singapore and France design scenes with French designer Matali Crasset will also be held. Over at SO Sofitel, French artist Jisbar Planche presents some of his fascinating, colourful artworks, while the ArtScience Museum plays host to Adrien M. and Claire B., a French artist collective who creates performances and exhibitions that playfully blend reality and virtuality. See Singapore’s past through the eyes of French photographer Paul Piollet‘s street photography

On the visual arts front, artist and filmmaker Hervé Cohen brings the subways to life with his immersive installation, Life Underground. Presented at the National Museum of Singapore, the project captures scenes of subways in 18 cities around the world, challenging viewers to re-define their conceptualisations of who they are in relation to the people around them.

Even science isn’t exempt from the festivities, with Science Centre Singapore and Universcience Paris presenting Urban Mutations, exploring the topic of cities and their constant evolution. The immersive exhibition allow visitors both young and old to step into the shoes of a mayor to realise their own cities of the future, and in the process explore the influence of the city environment on an individual’s life. 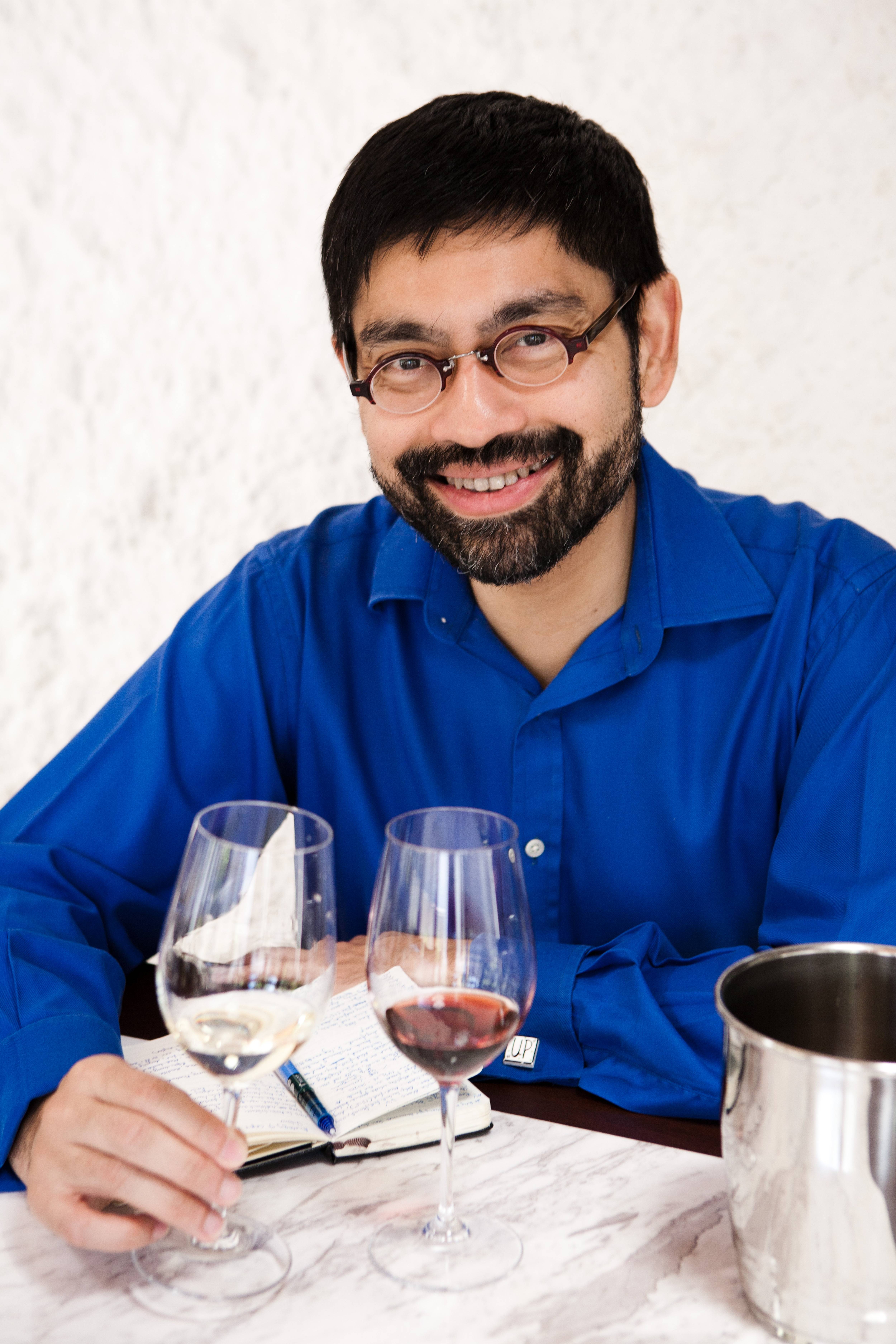 As a cultural festival, Voilah! also aims to introduce and make accessible French culture to local audiences. Naturally, as Singaporeans, that can come in the form of food, with popular food workshops as well as menus and tastings designed by partner restaurants for the festival. From a wine festival (with free flow of wine), to a Basque dinner with breeder and artisan producer Pierre Oteiza, a 5 course Provincial Pairings dinner planned by culinary designer Simone Fraternali at SO Sofitel,  and a 5-course Chinese food dinner  in the presence of Aurore Devillard owner of Château de Chamirey & Domaine des Perdrix (and learn about Burgundy while you’re at it too).

Opportunities available include masterclasses by Jean-Yves Bordier, the last artisan who still makes butter by hand, to get a literal taste of the flavours of French cuisine in Singapore, while French Sommelier Stéphanie Rigourd and Singaporean Master of Wine Tan Ying Hsien will also reveal the secrets of champagne during a “Wine Apprentice” class. Learn all about spirits with a cognac masterclass, or get closer to the bubbly with a champagne masterclass. You could even learn the secrets of French perfumery with a perfume workshop by SoChic and discover your own scent!

The festival will also see collaborations with educational institutions to inspire younger generations of thinkers and leaders. The National University of Singapore is celebrating  the 20th anniversary of the French Double Degree Programme – the longest running academic collaboration between France and Singapore, and will hosts lectures by French microbiologist Professor Philippe Sansonetti and Jonathan Weitzman, the founding Director of the Centre for Epigenetics and Cell Fate. Several masterclasses will also be held by personalities such as cellist Gautier Capuçon and Caribbean jazz group GMX Trio.

Voilah! will even be reaching out to the heartlands, with performances in community hubs. Une petite nuit au lit by Cie Cahin-Caha plays as part of Arts in your Neighborhood, public screenings of popular French films will be organised by the People’s Association and The Birds’ Promenade in Singapore Botanic Gardens by the baroque ensemble Artifices and a local ornithologist will bring the nature-lovers on a walk in search of a variety of birds. 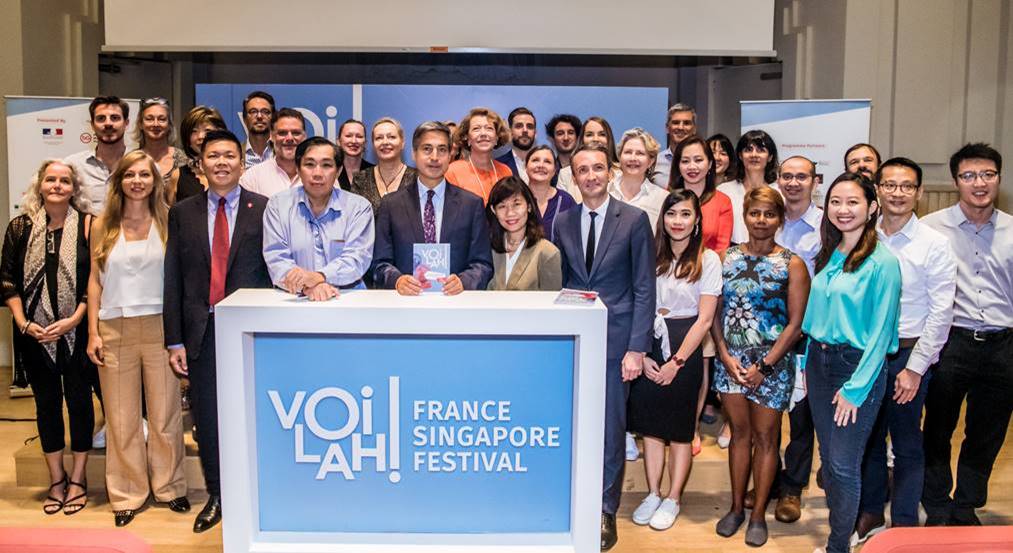 Says Ambassador of France to Singapore Marc Abensour: “Voilah! attests to the ties forged between our two nations and the diverse line-up is a celebration of the strength of our friendship through the decades-worth of close collaboration across various sectors. This is why we believe the festival belongs to Singaporeans as much as it does to the French, and we hope to grow Voilah! as an avenue for new ideas that can only be made possible when our communities get together.”