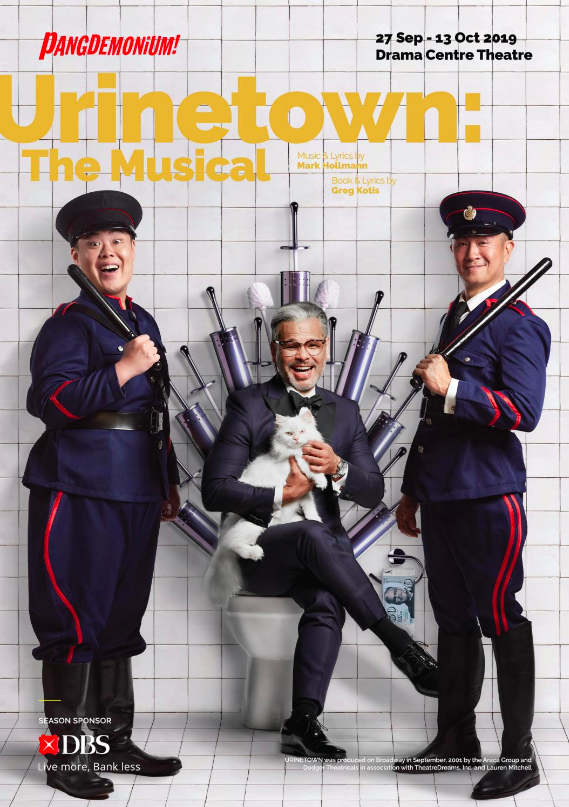 If Les Miserables was the musical that brought the romance to revolution, then Mark Hollmann and Greg Kotis’ Urinetown is almost certainly the one that takes the piss out of it. Wrapping up Pangdemonium’s 2019 season, Urinetown is the rare satirical musical that dares to poke fun at the musical genre and convention, yet, is in itself a more than competent production that not only exemplifies quality musical theatre – there’s something oddly resonant about its themes and message too.

Urinetown is armed with a semi-ridiculous (yet all too possible) plot where water has run low in ‘the most expensive city in the world’. Enter megacorporation UGC (Urine Good Company), who’ve set up various ERPs (Economical Relief Pricing, playing on another familiar pay per use acronym) that make toilets pay-per-use, as a means of limiting the amount of toilet trips poorer citizen can take each day, thanks to the lingering horrors of The Stink Years. With draconian regulations and an announcement of yet another ‘pee fee hike’, it’s not long before the people decide enough is enough, and rise up to fight the powers that be for their freedom to pee. 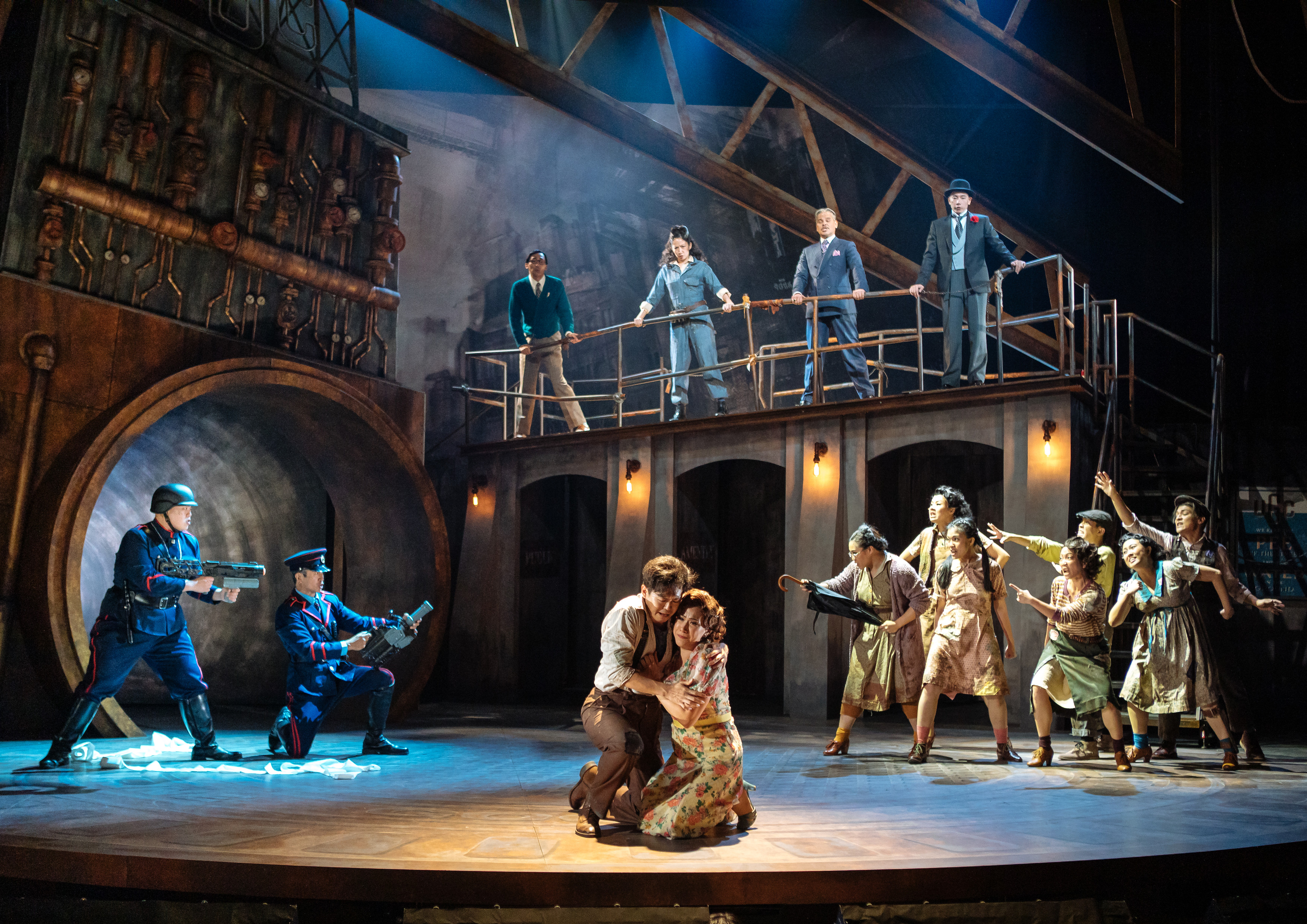 In portraying the unnamed city Urinetown is set in, Eucien Chia’s dystopian-looking set situates us in a gritty, seemingly underground maze of metallic pipelines and concrete tunnels. One gets the sense of danger at every corner, with its dreary inhabitants lining up at the filthy, overused Public Amenity #9, breaking into song as accompanied by a live band led by Joel Nah, throughout the musical.

But as bleak as its premise may seem, Urinetown is a musical that never takes itself too seriously. We open with narration from the self-aware, fourth wall-breaking Officer Lockstock (Adrian Pang) and Little Sally (Mae Elliessa), the latter acting as a wide-eyed consumer of Lockstock’s live narration of the events that unfold with opening number “Too Much Exposition”. Both Pang and Elliessa make for a great duo to watch onstage, with Elliessa’s voice turned up to a child-like falsetto, maintaining it even in song. Pang occupies a dual role as both narrator and character within his narration, and proves to be well-rehearsed as he effortlessly shifts between the two worlds within and without the musical’s frame.

We watch as the masses queue up to use Public Amenity #9, kept watch over by the penny-pinching Penelope Pennywise (Jo Tan) and her assistant, everyman Bobby Strong (Benjamin Chow). Designed by Leonard Augustine Choo, Penelope’s costume is an archaic outfit to behold, with an old-timey belt complete with coin dispenser that makes it immediately obvious her job in this town. Backed by the ensemble, Jo Tan excels in her role here as she sings ‘It’s A Privilege To Pee’, maneuvering between her stern, authoritative tone in her speaking voice and hitting difficult high notes in her singing voice. 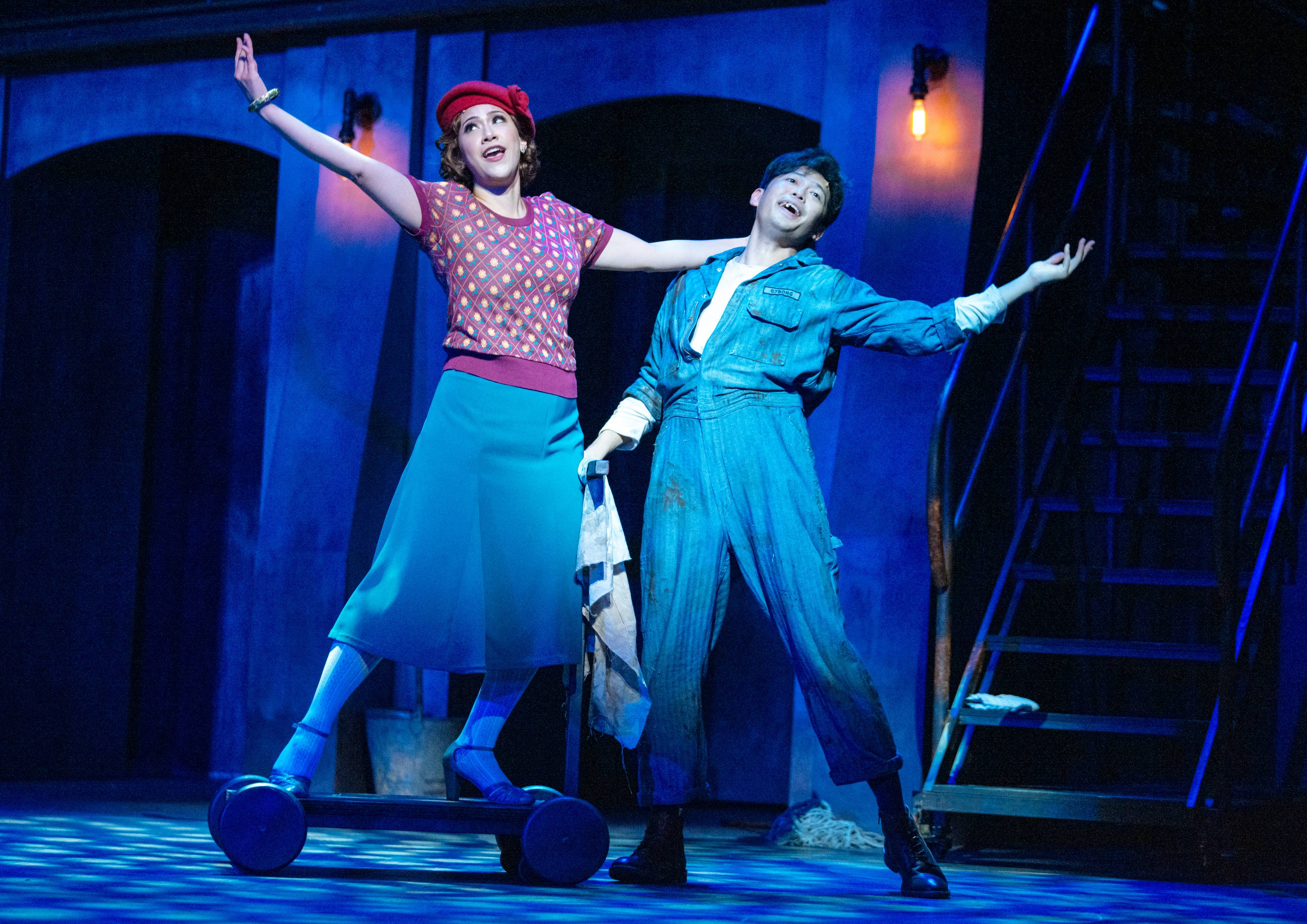 Transitioning to the offices of the nefarious UGC, a ‘glistening tower that can been seen in the distance from Urinetown’, the set undergoes a subtle and well-executed transformation that allows us to ‘enter’ the UGC tower. We meet evil CEO Caldwell B. Cladwell (Sean Ghazi, milking his scenes with villainy), along with simple, incorruptible Senator Fipp (a clean-cut Edward Choy), Caldwell’s assistant Mr McQueen (Erwin Shah Ismail) and the new hire – Caldwell’s daughter Hope (Mina Kaye, encapsulating sweet perfection and pure class). The staff break into song praising the elder Cladwell in “Mr Cladwell”, and there’s a wonderful, overplayed moment between McQueen and Hope as he grossly teaches her how to lick envelopes.

Returning to Urinetown, we meet Lockstock’s fellow officer Barrel (Andrew Marko). Here, both Pang and Marko display fantastic chemistry as their contrasting personalities complement each other, almost like the musical equivalent of Starsky and Hutch. Launching into the “Cop Song”, the ensemble appears in ridiculous uniforms – shorts lined with a single glittery red stripe running down each side. The choreography here is deceptively complicated, a smart number by Andy Benjamin Cai that uses simple steps to craft intricate formations that capture the essence of the song.

As Bobby and Hope meet for the first time, there’s an instant, electric attraction between the two as they express their optimism for the future. Opposites attract after all, and dressed respectively in a dirty jumpsuit and stylish ensemble, Benjamin Chow and Mina Kaye were practically worlds apart. Both Chow and Kaye share a fantastic onstage chemistry, their voices complementary and both strong in their own right that makes us root for them in feel-good duet ‘Follow Your Heart’, each finding hope and courage in each other. All of this leads to a madcap, organised chaos of an ‘Act 1 Finale’, with arm wrestling to mass choreography where the ensemble performs exceptionally well in tandem with each other, while Mina gets a chance to show off her incredible vocal range. 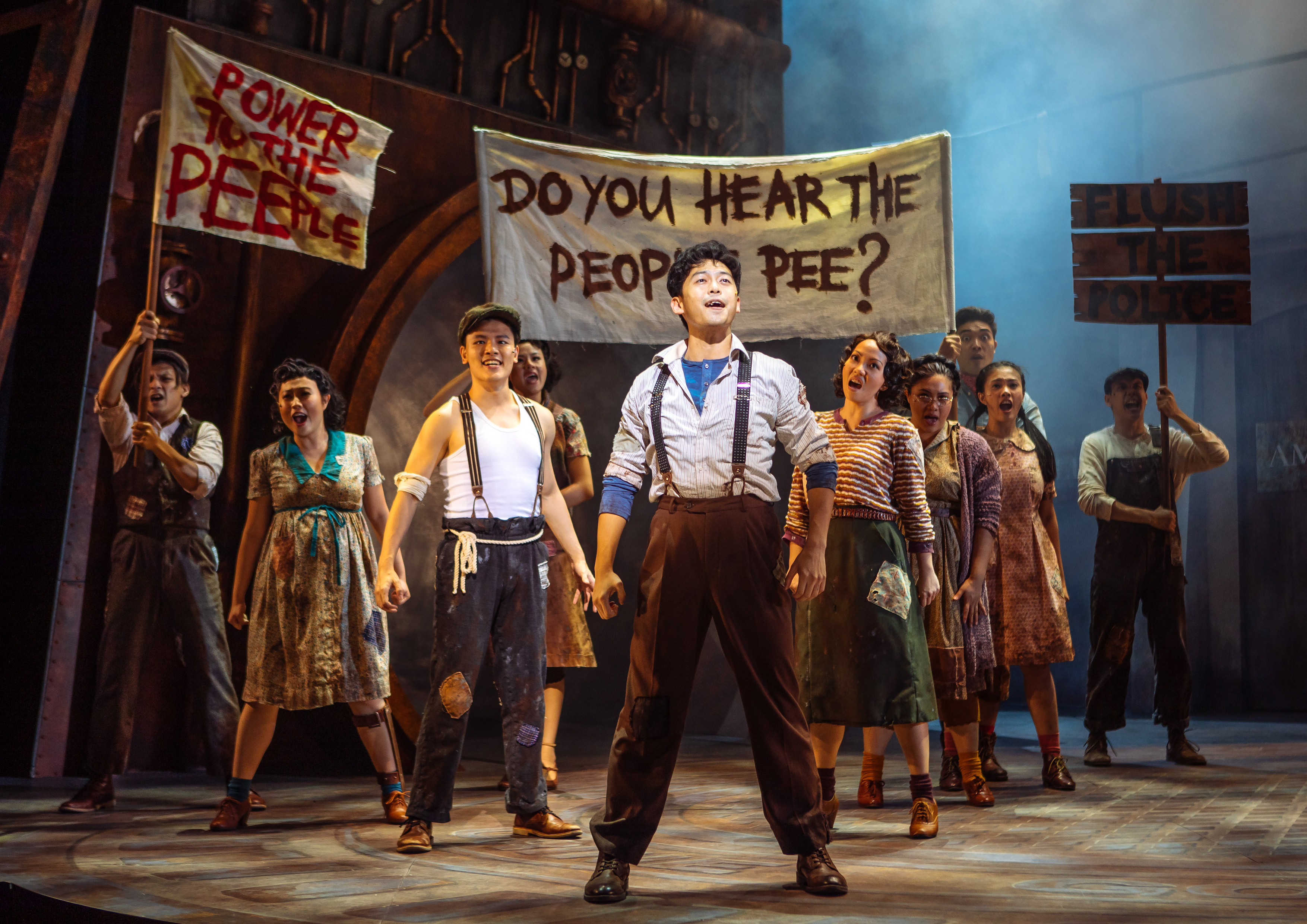 The madcap energy displayed in Act 1 only continues into Act 2, as we return from the intermission and are welcomed back as Lockstock and Little Sally, who introducing us to rebellion members Little Becky Two-Shoes (Ethel Yap) and Hot Blades Harry (Joash Tang). “What Is Urinetown” brings the ensemble together again, bringing to mind new questions and ponderings over how to further the rebel movement, before Bobby unites them all again with ‘Run Freedom Run’, a gospel-like anthem that balances the tenor, bass and soprano voices well (with Ethel’s voice being a particular standout).

Tensions only continue to rise however, as Bobby and Hope are faced with an ultimatum between the rebels and the UGC, leaving them no choice but to return to confront Caldwell once and for all. This leads to several major last minute climactic reveals and plot twists, and several outstanding musical numbers, such as Pennywise and Hope’s voices soaring in the beautifully sung ‘Why Did I Listen To That Man?’. As with any tale of revolution, several major character deaths occur in the resulting skirmish, their last moments made all the more dramatic and impactful thanks to director Tracie Pang’s good understanding of the play’s intent and aesthetic.

The Pyrrhic victory ends in bloodshed but success, with the entire ensemble coming together to sing ‘I See A River’, finally given the freedom to pee whenever they like, as much as they like, for as long as they like, and with whomever they like. But even with the final song sung, the musical isn’t quite over yet, as the city enters a new equilibrium and the dawn of a new rule in the wake of Caldwell. Urinetown ends on a surprisingly bleak note for a musical that’s been more about over the top, absurd comedy, but one that nonetheless feels appropriate for such its underlying dark themes.

Is there truly a moral or message to this irreverent production? With its constant contradictions and casual way it treats both its subject matter and audience, not really. But at its heart, there is an exuberant joy in this powerhouse of a production from Pangdemonium, the company at their peak with an all-around superb ensemble and well-cast actors, and the result is a musical that will leave you flush with delight, unable to contain your applause for the stellar stage work in this fun romp to end off the company’s 2019 season.

Urinetown: The Musical runs from 27th September to 13th October 2019 at the Drama Centre Theatre. Tickets available from SISTIC