Teater Ekamatra drags audiences into a dangerous dystopia where nothing and nobody can be trusted.

Across the history of dystopian fiction, there is perhaps none quite as visceral and teetering on the edge of existential dread and horror as the society depicted in Anthony Burgess’ A Clockwork Orange. But even more terrifying than that perhaps is the realisation that such a dystopia is becoming more and more real in the world today, a realisation that is not lost on director Noor Effendy Ibrahim as he directs Teater Ekamatra’s latest work.

Adapted into Malay by Zulfadli ‘Big’ Rashid, Ekamatra’s version of A Clockwork Orange follows both the original novel and Kubrick film adaptation closely enough – teenage gangster and upstart Al (Rizman Putra) spends his nights with his raucous gang of ‘Droogs’ (Shafiqhah Efandi, Izzul Irfan and Suhaili Safari) as they drink at the bar, drive down lonely roads and jauntily indulge in violent attacks on complete strangers. But when he’s finally arrested for murder, Al volunteers himself for a brand new experimental procedure to ‘cure’ him of his violent tendencies, in a bid to shorten his imprisonment. The treatment proves all-too effective, and when he returns to society, the tables are quickly turned against him for his past wrongs.

Over the years, across both novel and film, it has always been the fascinating amoral world of A Clockwork Orange that has kept audiences riveted for decades, and continues to do so even in this production. Seated in a theatre in the round format, Mohd Fared Jainal and Akbar Syadiq’s garishly pink set stretches out into the audience seats, with actors rushing in from the wings from all four sides at any point giving the play an element of unpredictability. Often, as they interact with each other, there is either an obscene sexual overtone or forceful violence attached, whether between friends or enemies. Onscreen, Eric Lee’s slow drive-by videos of neon lights and shady bars creates the sense that we’re caught in a very bizarre dream.

The aesthetic of A Clockwork Orange is surreal and absurdist, working to thrust audiences into a heady nightmare where one is never quite sure where reality ends and fiction begins. At one point of the cross-shape set, the ‘bar’ is represented by suspended plastic bags of clear liquid with tubes snaking out to ingest it from, almost as if they are morphine drips. There’s something unnerving about how Al’s cronies are dressed androgynously in pure white, donning unnerving animal-like masks with deep-set hollow eyes, and are specifically referred to as dogs (‘dirty’ animals) – certainly proof that this is a world that has forgotten all sense of morality. Similar to how humans are far closer to beasts than we think, the lines of gender and sexuality are blurred, with actors playing roles of the opposite sex (Al’s parents, played by Elnie S. Mashari and Roslan Kemat, have their genders inverted).

Adding to the uncertainty is A Clockwork Orange’s over the top, vaudevillian sense of humour, often almost intentionally offensive. There is no god in this world, only a higher power referred to as a ‘Hantu’ (ghost). A woman is literally beaten to death by a stuffed pig, sacrilegious to any Muslim. A religious zikir worship becomes a karaoke session between Suhaili Safari and Rizman Putra as they go ham on the improv, complete with cheesy, absurd music video to go along with it. Nothing is spared from satire, no one is as they seem, and an overwhelming sense of uneasiness is felt by us.

At the heart of A Clockwork Orange, beyond its violence, is a commentary on power and its propensity to corrupt. Right from the beginning, Al is already presented as a lord and ruler, seated on a throne on an elevated part of the stage. Shafiqhah Efandi, in a red tracksuit, warms up and dashes towards him, preparing to break his neck, while Elnie S. Mashari moves to activate a metronome, its ticking sound as if a reminder that anything and everything changes with time. Al’s position on the throne is certainly a precarious one, still a youth beholden to his parents and living under their roof, as much as he is a terror in the night.

Despite Rizman Putra having sustained a leg injury during rehearsals (forcing Ekamatra to cancel opening night), the team has managed to successfully incorporate the impossible-to-hide leg brace into the narrative, positioning Al not only as mentally disturbed, but physically too. To some extent, this almost informs us why Al’s behaviour is so violent and antisocial in the first place – a natural invalid in the world with nothing left to lose, the sense of unbelonging manifests itself as rage and hedonism. Rizman’s performance is key to what holds this show together, a mania within that only he can possibly embody, making us believe in the sense of apathy so integral to his character, as his voiceover reminds us over and over ‘What now?’

Rizman’s performance is professional throughout, never showing a single sign of his actual pain as he stomps around the stage, rolls about, and pushes himself to physical limits. As ridiculous as he looks donning a fur coat over a white toga, pink boxers and jockstrap clearly visible, there is a sense of mad menace he evokes each time Al commits a violent act. With Safuan Johari’s contemporary, rock sound design (with Rizman often providing the vocals), A Clockwork Orange becomes a dark theatrical concert, capturing the frustration towards the world in each song.

But despite his deranged mind and detestable actions, Al still manages to evoke sympathy in the audience thanks to Rizman’s transformation from angsty, devil-may-care teen to vulnerable young adult, subject to the will of the state. Completely unprotected now without his cronies and absolutely utterly alone to face the perils of the world, Al is a shadow of his former self – a walking zombie, and the titular ‘clockwork orange’ – seemingly real on the outside but reduced to mere mechanics within.

Al emerges from the horrific treatment he’s subjected to and receives his ‘comeuppance’ – a test to see the effects of the treatment literally crushes him underfoot (and forces him to lick a filthy shoe), all while being filmed on an iPad. Humiliation is his ultimate punishment, and this warped justice carried out by every single person in society; a religious leader is suggested to have sexual designs on Al while he is imprisoned, while the police are corrupt and subject innocents to random violence just as much as Al did. Thanks to the ensemble’s total commitment to their roles, from the shouts of ‘pain’ to the resonant sound of each slap that lands, one is afraid that the possibility of something truly awful happening is very real, and the line between performance and performer becomes blurred. 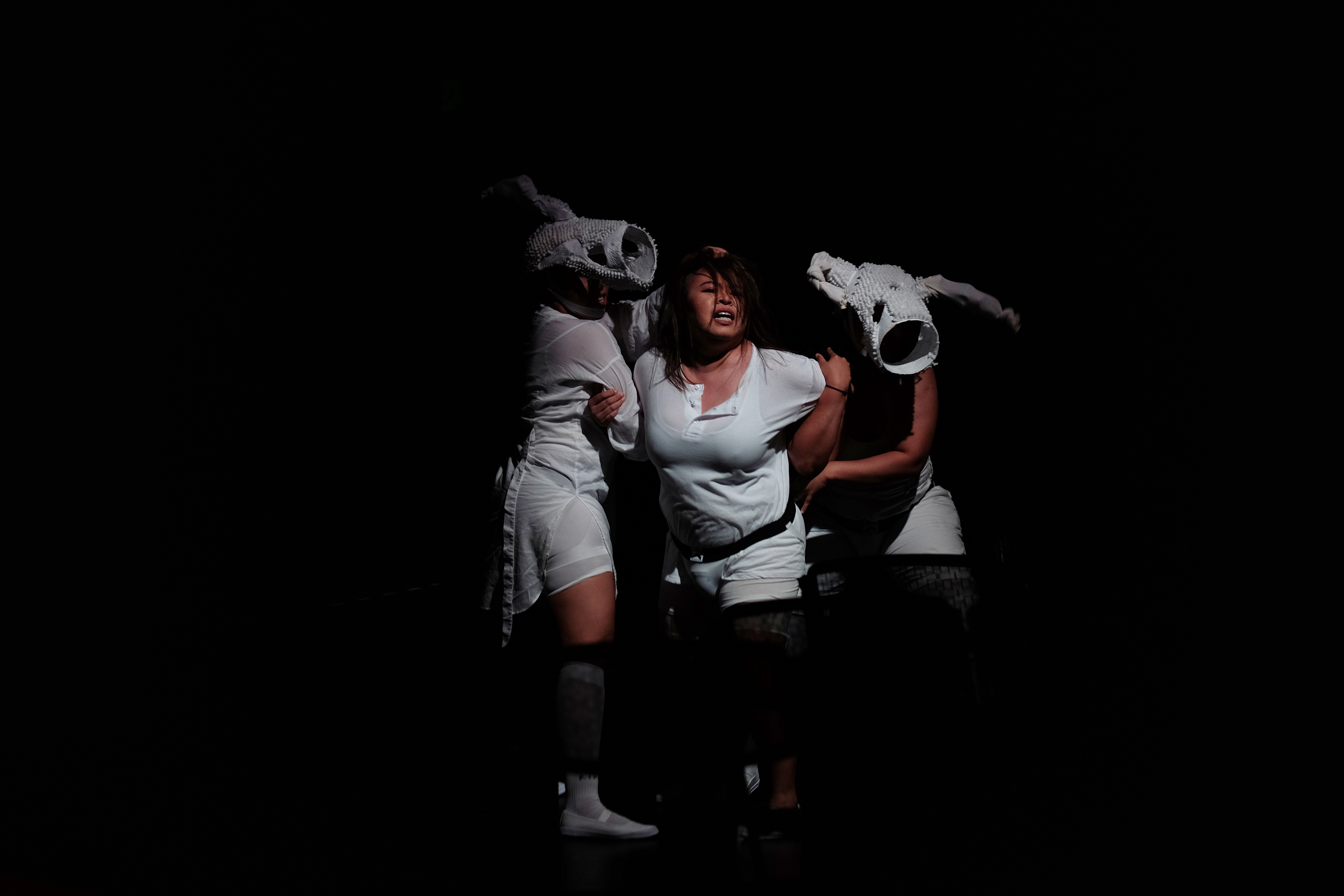 Even when Al seems to finally find a safe space after being cast out by his family (thanks to an unexpected tenant, snarkily portrayed by Izzul Irfan) and brutalized by the people he trusts most, he is betrayed further still and continues to fall victim to the madness that grips this world as he begs. A Clockwork Orange offers no comfort of that sort, leaving us only with the promise that the violence and corruption never really ends, and regrets abound as his past catches up with him and leaves him for dead.

A Clockwork Orange’s message is clear that violence in any form is horrifying, but when sanctioned by the state, is somehow worse. We trust in the government to right the wrongs of this world, but if they do the wrong things for the right reasons, fighting violence with violence, does that make them any better than the people they’re punishing in the first place? Hope is the furthest thing anyone can possibly have in this crazy, psychedelic world, and either we choose live in fear each day, or lose ourselves to embrace its darkness, dancing madly on in a futile struggle to cope with the nightmare of reality and the bleak future ahead.

A Clockwork Orange played from 25th to 29th September 2019 at the Esplanade Theatre Studio.

1 comment on “Review: A Clockwork Orange by Teater Ekamatra”