Fun-filled weekend out for the whole family.

Children’s theatre is often one of the most overlooked genres of performing arts by adults. Much more than just a means to keep the little ones entertained, children’s theatre often requires artists and performers to have a high calibre of imagination, as they breathe life into the non-living, transform simple spaces into entire worlds, and invoke curiosity and wonder in their young audiences watching each show. There is a beauty in the sheer amount of precision and talent it takes to make a good children’s show, and the very best of the medium often leave even adults hankering for more.

With the 2019 edition of Octoburst!, the Esplanade has once again brought in a number of fascinating acts, both ticketed and free to fill the performing arts centre with a flurry of activity over the weekend, keeping families entertained throughout all three days. We ourselves caught three international productions playing as part of the festival, and can say with confidence that they’ve brought out our inner child once again. 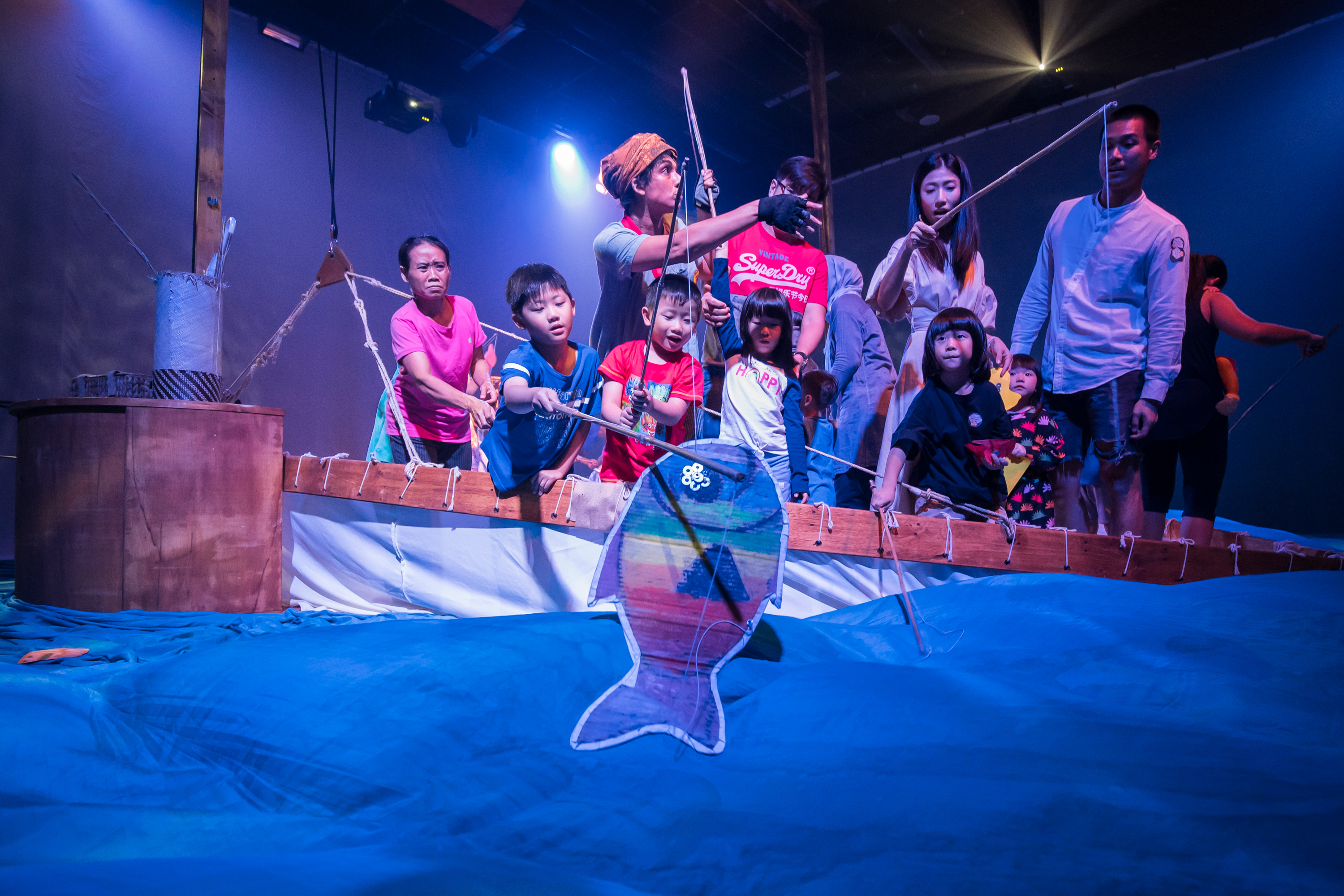 Children’s theatre, by virtue of its pint-size audience members in relation to towering adults, is a form that naturally lends itself to immersive experiences. Australia’s Polyglot Theatre and Indonesia’s Papermoon Puppet Theatre then have come together to create a truly immersive experience in Cerita Anak (Child’s Story), as audience members get a chance to get up onstage and be a part of the show as they hop aboard a boat, cruise along a rollicking ocean, sink to the ocean depths, and even get rescued by helicopters before safely returning to dry land. 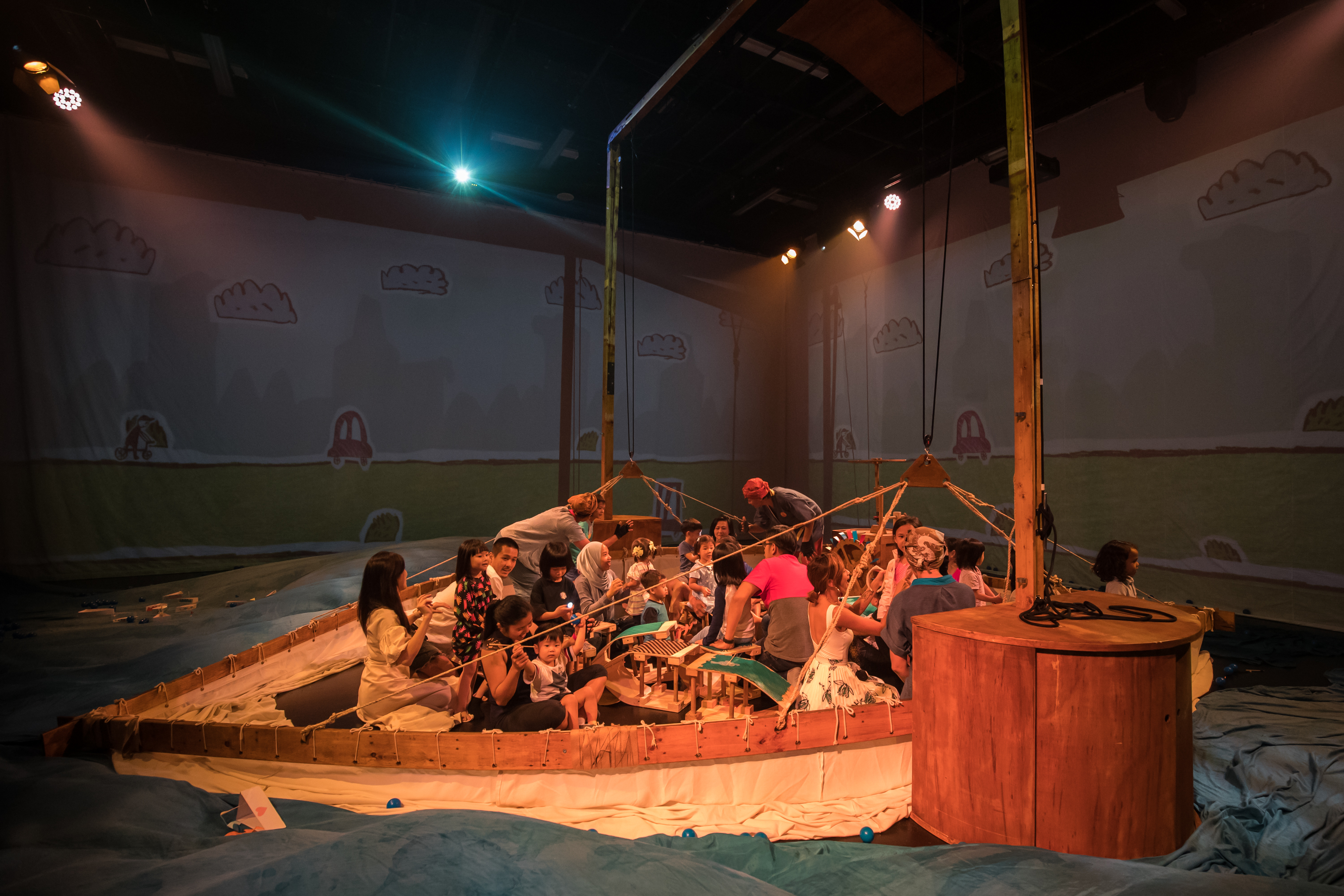 The hand-drawn style visuals featured in Cerita Anak are gorgeous, with one particular scene creating an almost three-dimensional effect as tiny boats rain down on a screen. Composer and sound designer Stephen O’Hara’s soundtrack is playful, yet hints at the possibility of excavating far more emotional depth should the story have been for an older audience. Anna Tregloan’s set is nimbly able to transform a boat into a private ‘room’, where audiences are regaled with shadow puppetry and Papermoon’s whimsical, hand-crafted sea creatures glide above audiences. 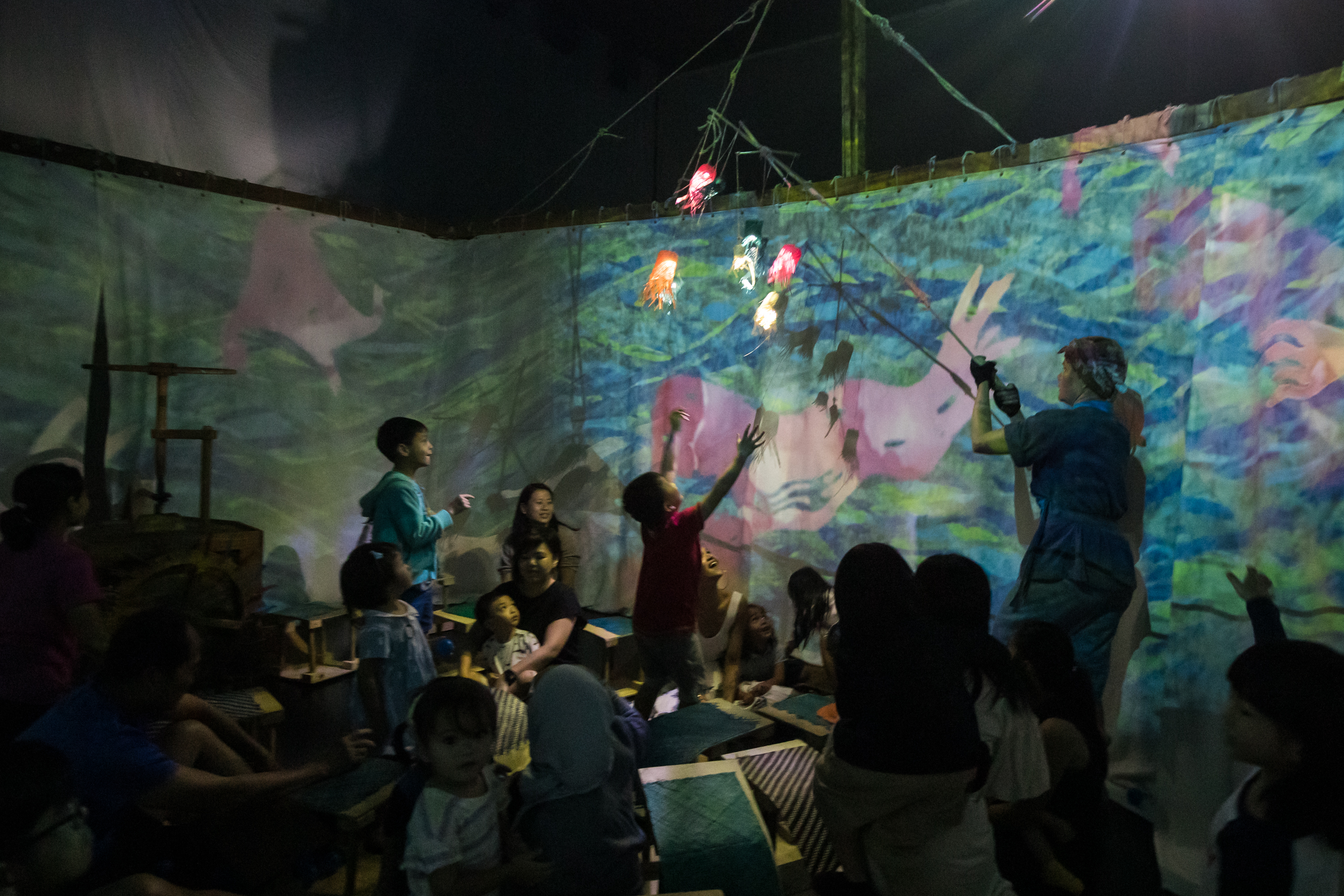 The biggest issue with Cerita Anak however, is the decision to sell both tickets for the immersive experience, and the ‘Villager’ experience, where audiences simply sit and watch the action play out from regular seats. Marketed as a ‘live picture book’ for villagers, the experience is completely compromised, quite simply because we are distanced so much from the experience, that we feel only disappointment that none of the fun pushes past the translucent screen that separates us further from the onstage action. In essence, we are positioned as voyeurs from a distance, as if watching children play at a playground without the opportunity to do so ourselves, and from the consistent complaints from children around of disgruntlement, my fellow villagers were equally dissatisfied with their experience.

A Ladder to the Stars by Visible Fictions (UK) 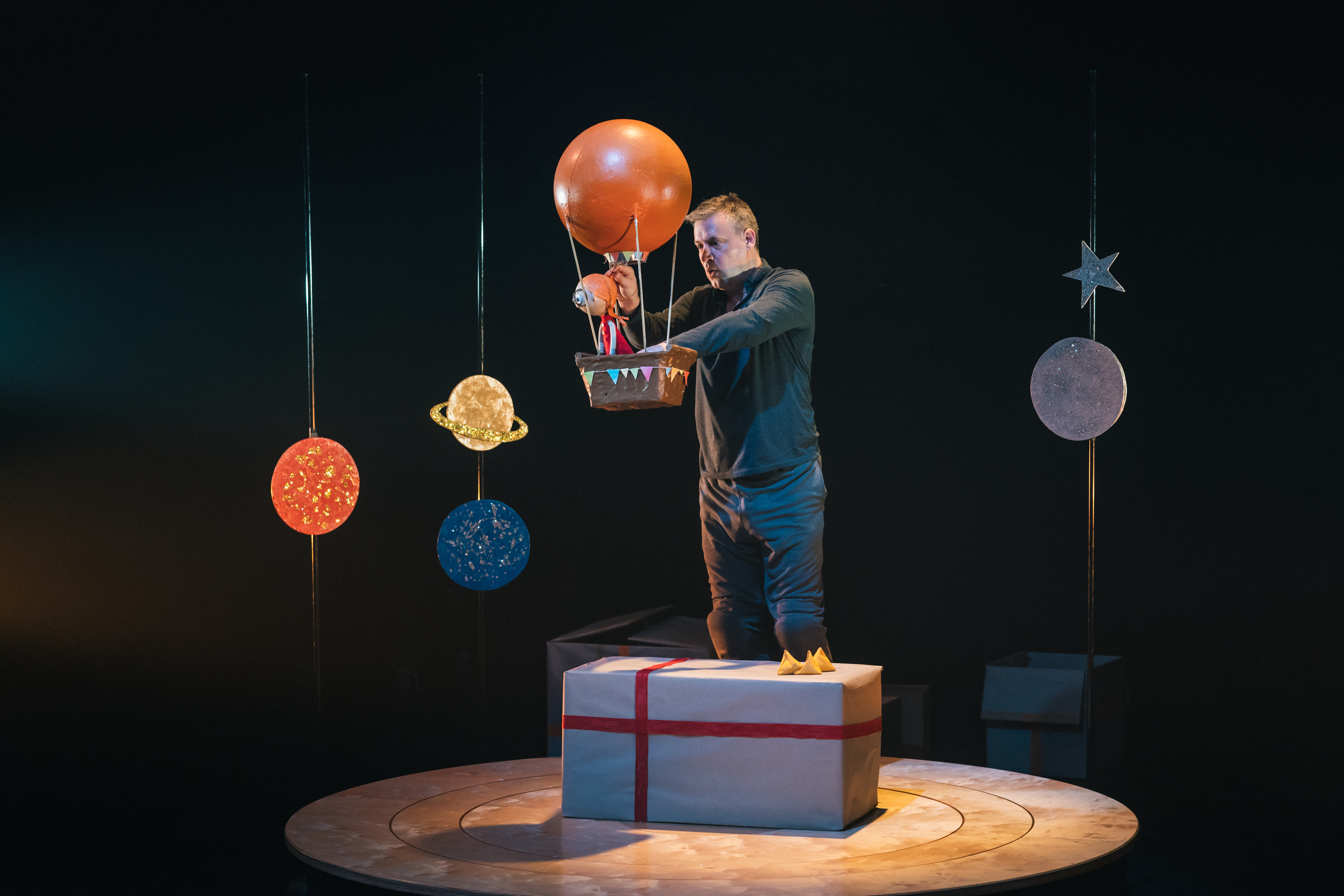 Written by Simon Puttock and adapted for the stage by Dougie Irvine, Visible Fictions’ A Ladder to the Stars follows the simple tale of a little girl wishing to dance amongst the stars on her birthday. Hearing her wish but with no immediate solution in mind, the star enlists the help of his fellow celestial bodies, and together, they work out the perfect plan to grant her this. 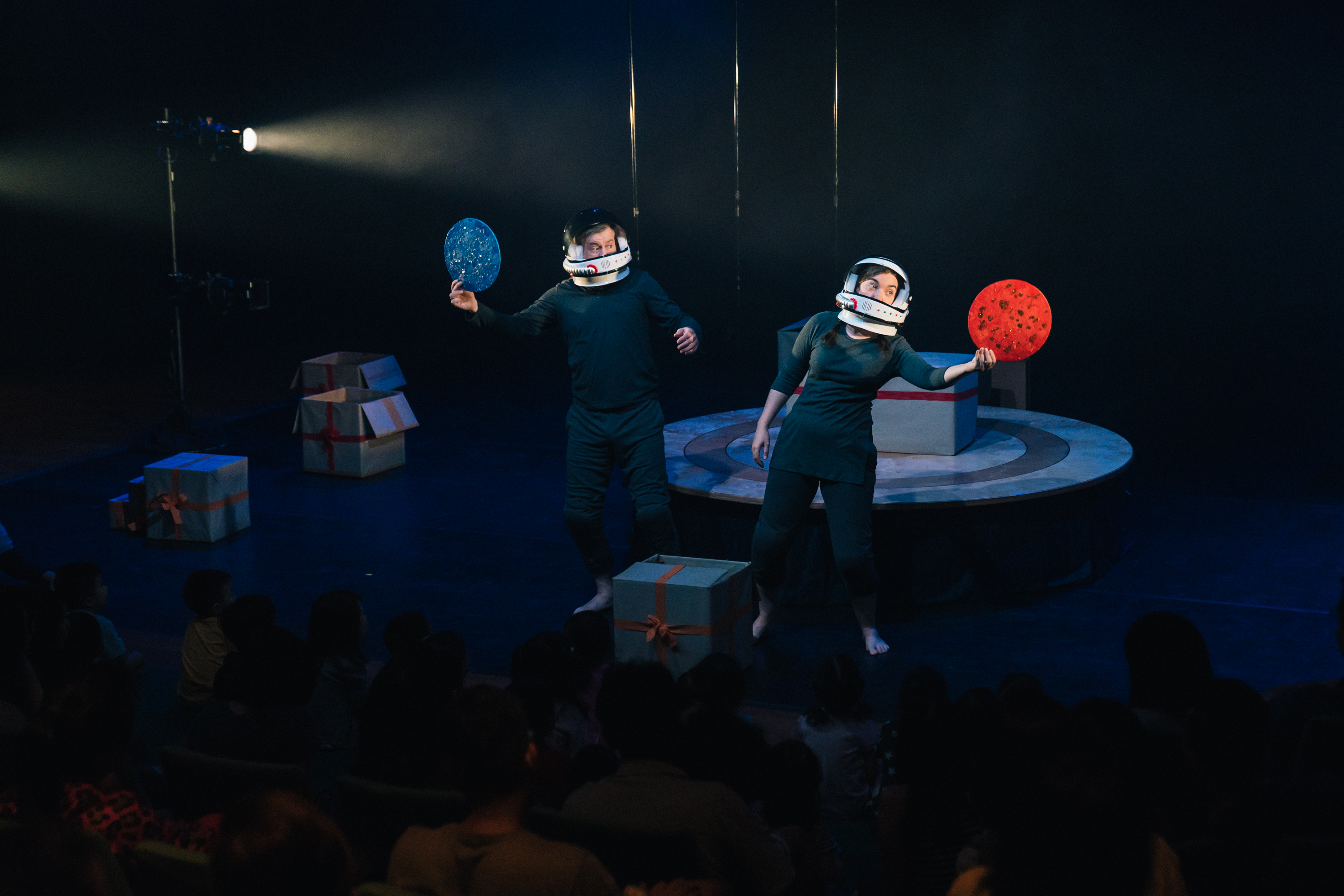 A Ladder to the Stars was a high energy show that while simple in narrative, was demanding on its performers Amy McGregor and Rick Conte. It’s certainly not easy to keep such a young audience engaged throughout, but both McGregor and Conte, with infinite well of energy, ensures that the kids are literally on the edges of their seats as they hang off every word, audibly gasping in each scene. Becky Minto’s set is ostensibly simple, with presents arranged around the stage in line with the play’s birthday story. Often, these end up acting as storage for a large number of props as the story goes on, from planets to hot-air balloons, each one more delightful than the last. The central revolving platform is used to great effect, from representing a solar system to depicting the flow of time and cycle of growth. 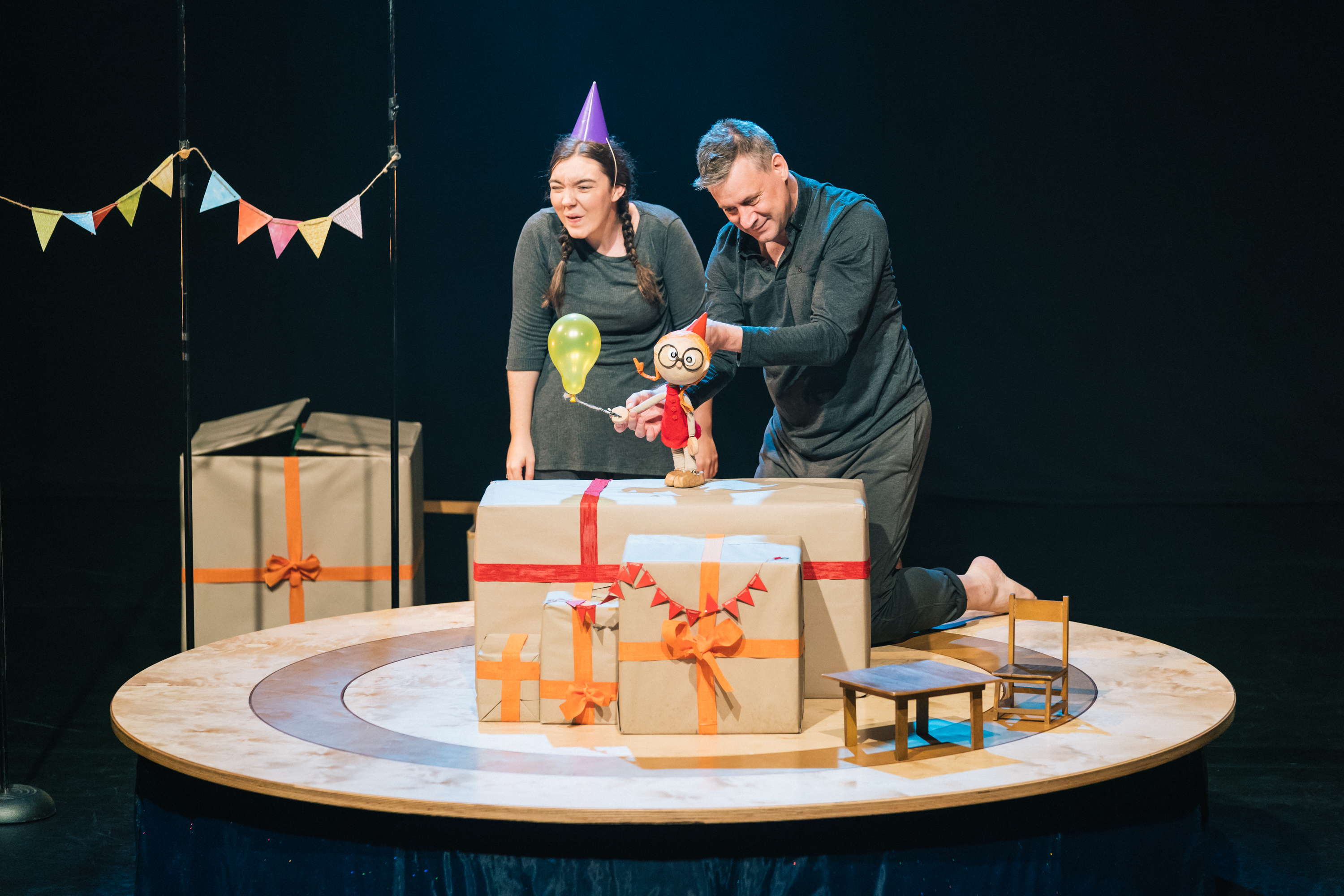 At its heart, A Ladder to the Stars is a story of hope and magic, and under Dougie irvine’s direction, both Conte and McGregor imbue their little puppet with plenty of details and personality quirks that really makes her come to life. Even for adults, there’s an element of surprise that’s kept right up to the very end, and no matter what, joy is at the very heart of this production that reminds everyone, whether young or not so young, that with enough time, wishes do come true.

Tailor Made by The Train Theater (Israel) 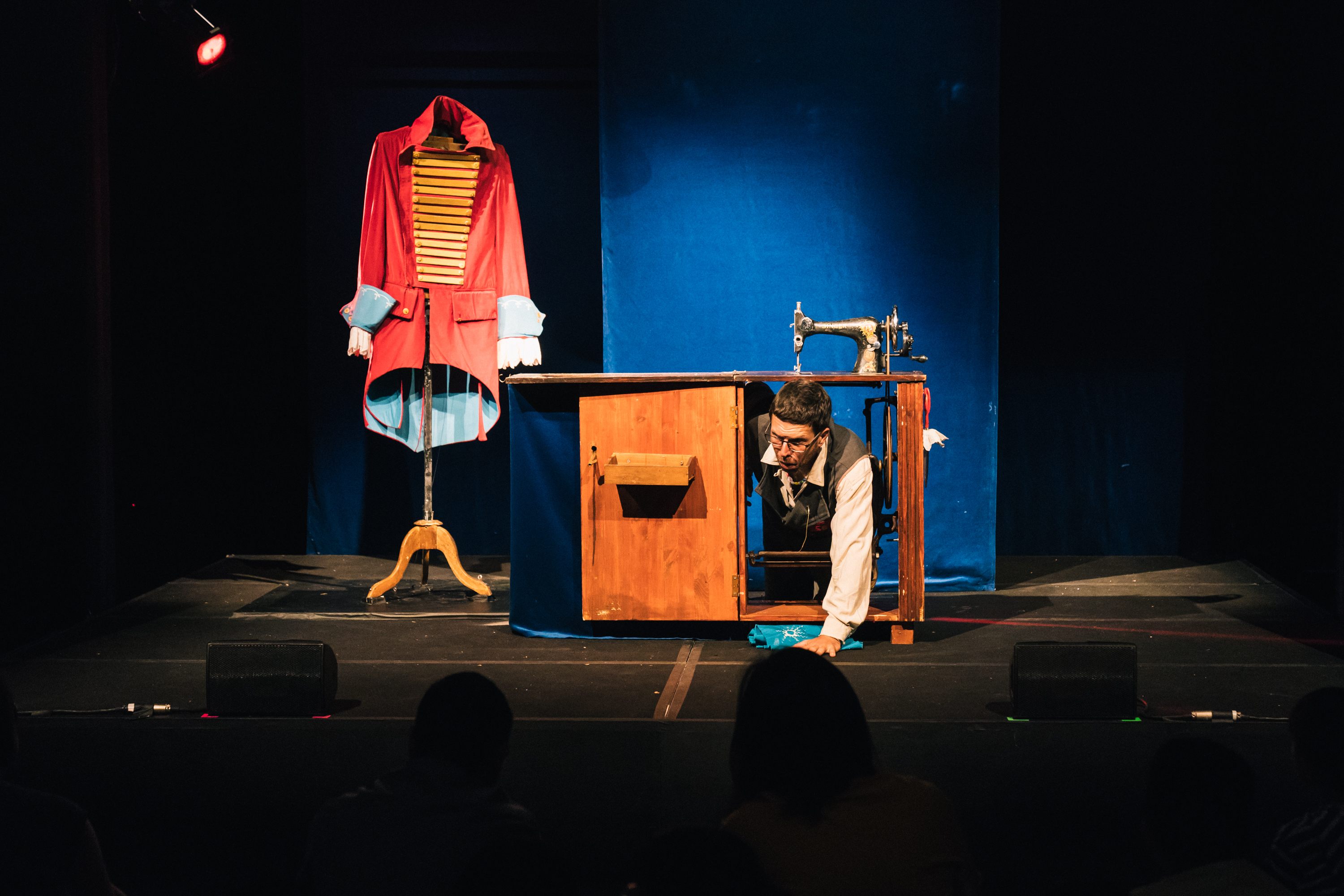 Finally, performer Ornan Braier of Israel’s Train Theater presented their award-winning Tailor Made, a one-man show where a tailor receives a note one day to sew a perfectly-fitting coat by midnight. But when midnight arrives and no one comes to claim the coat, he embarks on a magical adventure as his sewing machine, scissors, thimble and other paraphernalia come alive.

Tailor Made is perhaps the very best example this year of children’s theatre done right. With minimal dialogue or narration, Braier is both a character and puppeteer within the play’s world, revealing a tiny, intricately-crafted puppet resembling him, as he takes said puppet on a journey across his sewing table. A pair of scissors becomes a  ballerina, a sewing machine churns out a length of cloth depicting music and even a fairytale castle, before transforming into a loyal steed to bring the little tailor on a journey. A hanging lamp becomes the moon, and a makeshift boat sails into the audience as they blow to guide it along. Even the coat itself is possessed by a playful spirit, slapping the tailor away when he attempts to get too close.

What makes Tailor Made such a delight is its constant reminder of the power of imagination, breathing life into old tech and machinery as Braier re-envisions these everyday objects as something else altogether, something most of the audience no doubt do in their spare time as well. There’s a surprise waiting at every corner as we’re never quite sure where this tiny puppet is about to take us next, if an illusory magic trick is about to wow us or a brand new ‘toy’ will make its appearance an evoke a sense of wonder as Braier manipulates it effectively. Short, sweet and well-planned and performed, Tailor Made is exemplary children’s theatre that shows you don’t need a big stage or catchy songs to impress – just a willingness to play and find the beauty and fun in the everyday. 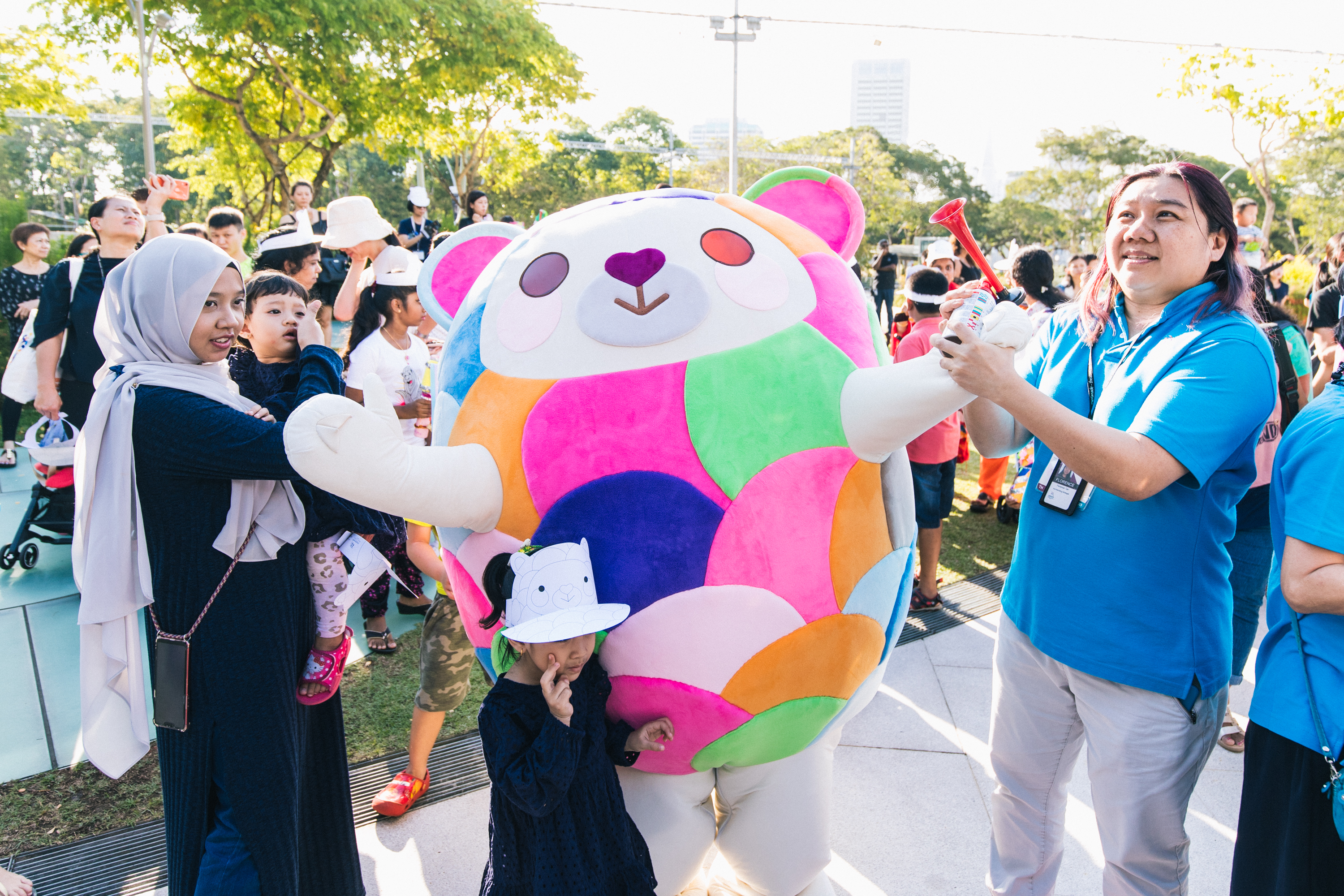 And that’s not even counting the countless other events that played simultaneously all across the Esplanade, full of life as families streamed in and out all through the weekend to enjoy the festivities. Hearing the peals of laughter and endless streams of questions from curious children about the performances and activities they’d experienced, one felt more youthful than ever before with all the joy and wonder that Octoburst! brought to the Esplanade.

Octoburst! 2019 runs from 4th to 6th October 2019 at the Esplanade. Full programme and tickets available here

0 comments on “Review: Esplanade’s Octoburst! 2019 – Tailor Made, Cerita Anak and A Ladder To The Stars”