Worst birthday ever makes for one of the best shows of 2019.

Growing up in Singapore, the hard and fast path to ‘success’ has always been made abundantly clear to each and every child: study hard, get into a good school, rinse and repeat, and you’ll lead a happy life. But for those who don’t follow exactly as the system dictates, the consequences could be dire and throw one’s entire life off course.

That is the great fear that lies at the heart of the students in Nine Years Theatre’s final production of the year, as the local theatre company stages a new Mandarin translation of Lyudmila Razumovskaya’s Russian classic Dear Elena Sergeevna. Adapted by and directed by Nine Years Theatre Artistic Director Nelson Chia, Dear Elena not only tackles familiar issues of the education system, class and troubled youth, but at its heart, places the value of human morality itself on trial.

Dear Elena takes place over the course of a single night, towards the end of the Soviet Union as four students spring a birthday surprise on arrive at their beloved teacher. Nelson Chia’s sparse set comprising chairs, tables and frames for doors and windows leaves much to the imagination, with even a bed and toilet represented by chalk drawings on the floor, allowing the acting and script to become our focus instead. As the students enter Elena’s home, the mood is joyous, with a youthful energy that fills the space as they rush in with gifts, flowers and wide grins. A sudden bang is heard as a confetti popper is fired off like a gunshot, leaving pink, petal-like confetti strewn all over the floor, where it will stay for the remainder of the play, as if trees have shed their flowers, symbolic of youthful years now fallen.

But this celebratory guise quickly gives way as the students reveal their true intention. The birthday surprise is merely a ruse, and they have arrived for far more nefarious purposes: to get from Elena the key to the safe holding their Math exam papers, which they intend to switch out for better grades before they’re marked the next day. This proves far more difficult than planned, as Elena proves to be a hard-to-crack pillar of morality, believing that she cannot play any part in corrupting her students. Thus begins a long night of debate and coaxing, as neither side backs down, leading to far more extreme methods to be executed.

Dear Elena is an intelligent play that never feels inaccessible to the average audience member. Even philosophical and psychological concepts such as the origin of evil and the Antigone Complex are clearly and succinctly summed up by its characters, resulting in a keen battle of wits between the students and Elena as they attempt to break her spirit. Dear Elena runs a dangerous risk of feeling like an endless debate between one side and another, but Nelson Chia has managed to bring out little moments of dark humour peppering the script to break monotony, while there is a high degree of tension that hangs in the air, as we wait with bated breath to see how the students will attempt to convince Elena each time she stands fast. Each successive method only raises the stakes higher still, and an otherwise pleasant waltz becomes the backing track to a particularly wicked scene towards the end, staining the sound forever with trauma.

As much as one believes in Elena’s lofty ideals of morality, it’s hard not to swerve to the side of the students from time to time as they each express their own reasons for wanting to carry out this despicable act of cheating. Lyalya (Shu Yi Ching) lives in a single room, single parent household, and desperately wants to better her life, calculating even the value of her virginity if it means rising through society. Her boyfriend Pasha (Neo Hai Bin), is a philosophical prodigy from a family of intellectuals, fears being rejected from university because of bad math grades. Vitya (Hang Qian Chou) is a terrible student and wants only to get by, but is screwed over by the overemphasis on the education system, while ringleader Volodya (Timothy Wan) is actually fine, the most well-off of the group and is simply doing this to prove that he can. 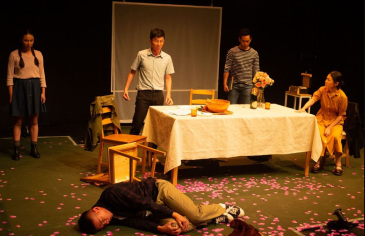 As immoral as their actions seem to be, it’s not hard to understand how far a student might go when pushed to the ends of their rope. After all, we ourselves live in a high-pressure society where students commit suicide over a single bad grade and constantly suffer from anxiety, depression and other ills fretting over exams. Elena reassures them that even if they fail, they can try for university the following year, but the students laugh her off, knowing that every year late is another year lost. If the cost of leading life as a good person is the loss of a comfortable life, then are one’s morals truly worth that much? Even Elena herself has a flash of temptation when faced with the possibility of transferring her sick mother to a better doctor.

This sympathy for each of the five characters is so strong because of the top tier performances from each cast member. Shu Yi Ching and Neo Hai Bin each embody their roles as the good girl wanting more and the awkward nerd well, while Timothy Wan displays a cocky confidence and complete lack of morals in his role as the antagonist, dishing out one hard truth after another. Hang Qian Chou turns in a particularly memorable performance here as the alcoholic Vidya, stumbling about the stage while ranting in a stupor, as well as the most apologetic of the four students. Mia Chee rounds off this stellar ensemble as Elena, impossible to watch without feeling a twinge of pain as her defences come crumbling down with the realisation of the generation gap and shift in values over time, ending in a moment of pure existential horror as she breaks down completely. Each character is given their own monologue over the course of the play, and is enhanced by Liu Yong Huay’s lighting design illuminating them just right by casting dramatic shadows to emphasise each performance.

Dear Elena ends on a most ironic note, proving a seemingly naive statement about goodness that Elena makes much earlier in the play. But this Pyrrhic victory is one that comes at the cost of nearly all of them losing near complete faith in humanity, psychologically broken without repair as the sun begins to rise, raising the question of whether it truly is worth it to hold on to one’s values, if such destruction arises from the resulting conflict. Original playwright Razumovskaya often considers this her weakest play as most theatre companies tend to perform it badly. But this production by Nine Years Theatre may well be the production that proves her otherwise, as a thrilling, devastating, deep dive into the darkest reaches of the human condition, leaving us questioning our own dedication to being good people.

Dear Elena plays from 17th to 20th October 2019 at the Drama Centre Black Box. Tickets are SOLD OUT.