You may know the songs, but do you know the people behind them? Best known for their work on soundtracks from Marry Poppins to Winnie the Pooh and The Jungle Book, Robert and Richard Sherman are undoubtedly two of America’s most well-known songwriters of the 20th century. But beyond them, even their father Al Sherman, and eventually, Robert’s son Robert J. Sherman (Robbie), were skilled songwriters in their own right, each achieving a degree of success that made the Shermans one of the most renowned musical families in history. 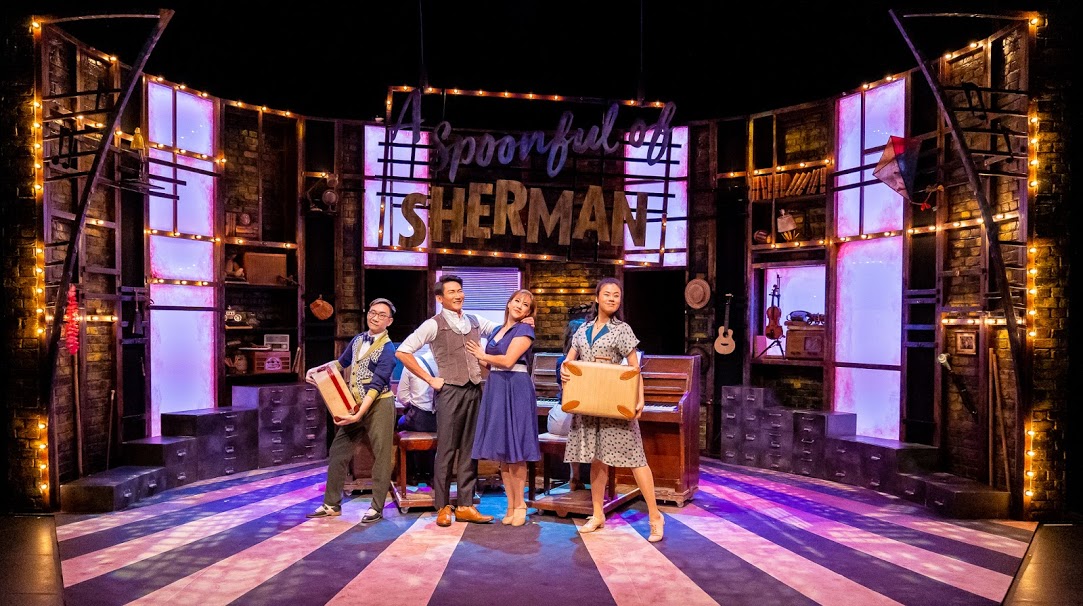 A Spoonful of Sherman tells story of the Sherman family and their world famous songs, as condensed into a single 2 hour musical revue, with a book written by Robbie Sherman himself. Presented by Sing’theatre in its Asian premiere, this version of the revue is directed by TJ Taylor, and stars Aaron Khaled, George Chan, Hossan Leong, Mina Ellen Kaye, Vanessa Kee and Joanne Ho (also Music Director). 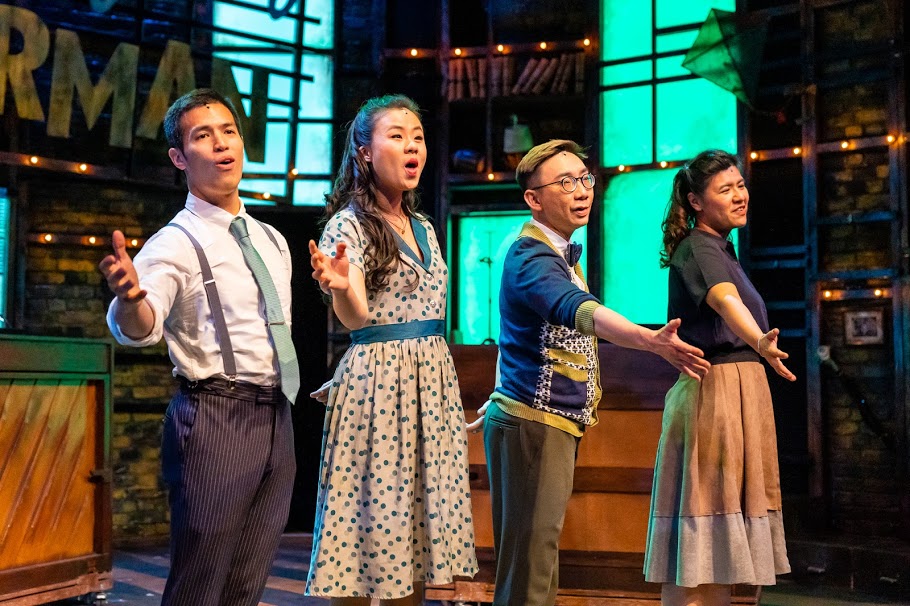 A total of 55 songs written by the Sherman clan are featured in this revue across two acts, interspersed with the history of the Sherman family spanning Al’s rise during the early 1900s to Robbie’s 21st century achievements. Despite the relatively large theatre, Gabriella Slade’s living room-like set makes the stage feel cosy and intimate, closing the distance between audiences and performer. Intricately detailed like a New York City home music studio, we get a sense of realism from exposed brick walls and plenty of paraphernalia adorning the shelves from old radios to songbooks, but all of it comes together to create a keen sense of nostalgia and a relaxed atmosphere for audiences to settle into. 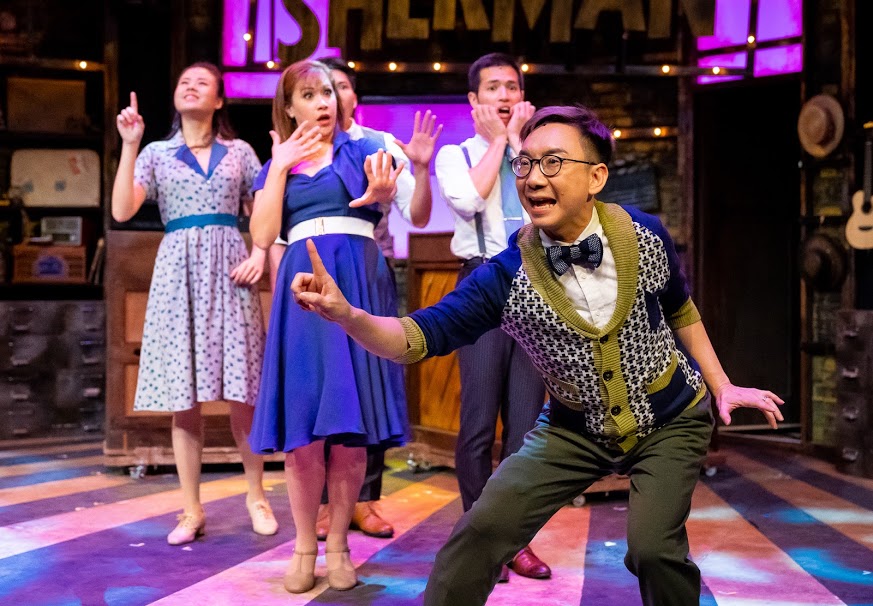 All stories start at the very beginning, and A Spoonful of Sherman charts the the Sherman family history from Al Sherman’s birth. We are introduced to the family patriarch as an unendingly hopeful, optimistic man who channeled that positivity into his songwriting, many of which saw America through the Great Depression (with ‘Now’s The Time To Fall In Love’). That same attitude carries on and spreads to his entire family, and if anything, the Sherman family childhood is one of the happiest ones we’ve heard. Growing up, the Shermans travelled together as a single unit as Al Sherman toured across the country, and the family were happy together, tight-knit and closely bonded. It’s no wonder then that both the Sherman brothers Richard and Robert were similarly close as siblings, and they too internalised the value of family and togetherness, and we understand how it is that their melodies and lyrics can be imbued with such inherent joy, with songs like ‘Pineapple Princess’ and ‘Love Machine’. 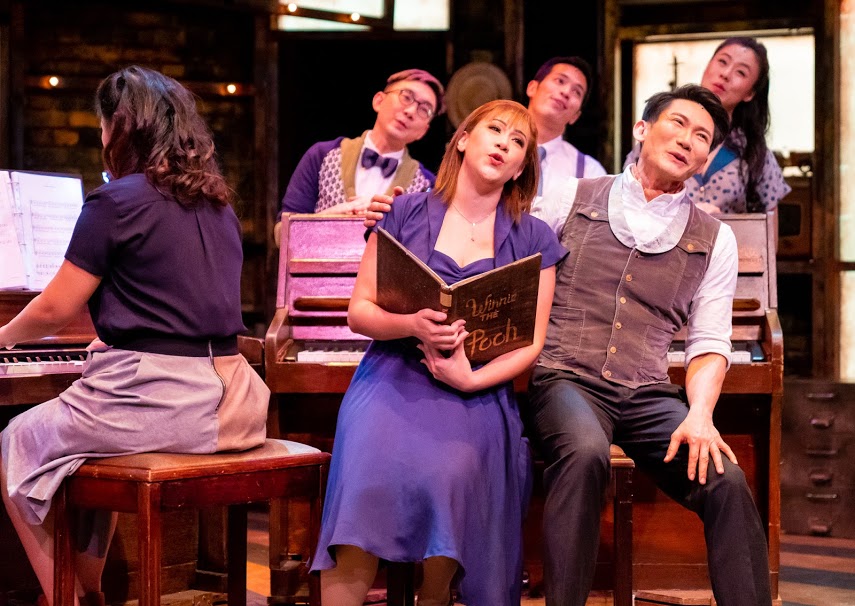 As we move through the years, it’s evident that the energy in the theatre shifts along with it, with audience members spanning a diverse range of ages reacting to the songs of their childhood, be it Al Sherman’s bops or the Sherman brothers’ most recognizable songs written for Disney films. A Winnie-the-Pooh medley really gets the audience smiling at the memory, before segueing into a marathon eight-song Marry Poppins medley, with favourites like ‘A Spoonful of Sugar’, ‘Chim Chim Cher-ee’ and of course, ‘Supercalifragilisticexpialidocious’ to end off the first act on a high note. Even if they’re not immediately familiar with the song, the power inherent in each number is that they’re all so simple, so direct with their messaging that it’s not hard to start tapping along and smile, regardless of whether we grew up with that song or not. 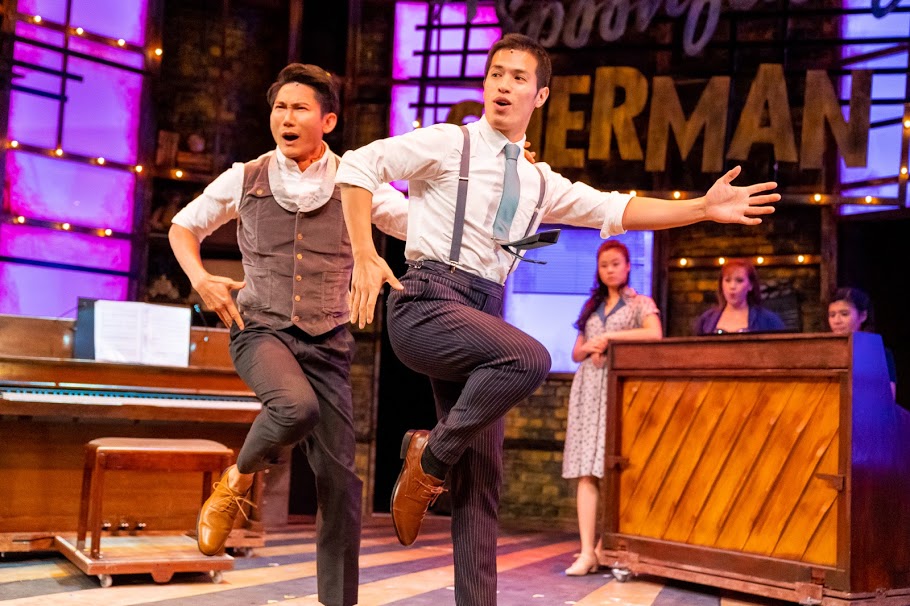 It is no easy feat to keep up such fervent energy across two halves of a show, but the cast proved they were more than capable of this, with an emotive rendition of ‘Ten Feet Off The Ground’ to welcome the audience back to the theatre, and the smiles returned just as easily as they were gained in the first half. This second act is where the show’s best moments come out, signifying the peak of the Sherman Brothers’ songwriting capabilities and creative choreography on director Taylor’s part. George Chan’s performance of ‘I Wanna Be Like You’ (from The Jungle Book) literally sees him aping the movements of orang utan King Louie, while the cast begin utilising props from a missing dog poster to a pair of binoculars for ‘Snoopy Come Home’ (from the film of the same name). 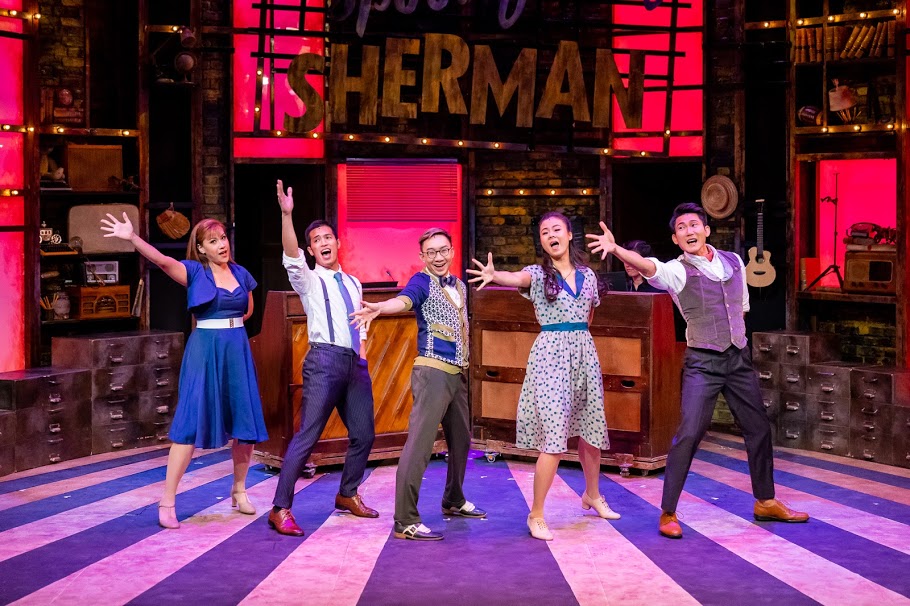 The Shermans kept to a three-rule songwriting philosophy all their lives – keep it singable, simple and sincere, rules that feature in every song in the revue. Not that the performance is simple, as this show is anything but. From the moment they step onstage to open with a vocal overture of excerpts from the Shermans’ songs, the seven performers remain onstage for the entire duration of the show (sans intermission), and are tasked to not only sing, but also act, perform choreography and play various musical instruments throughout. 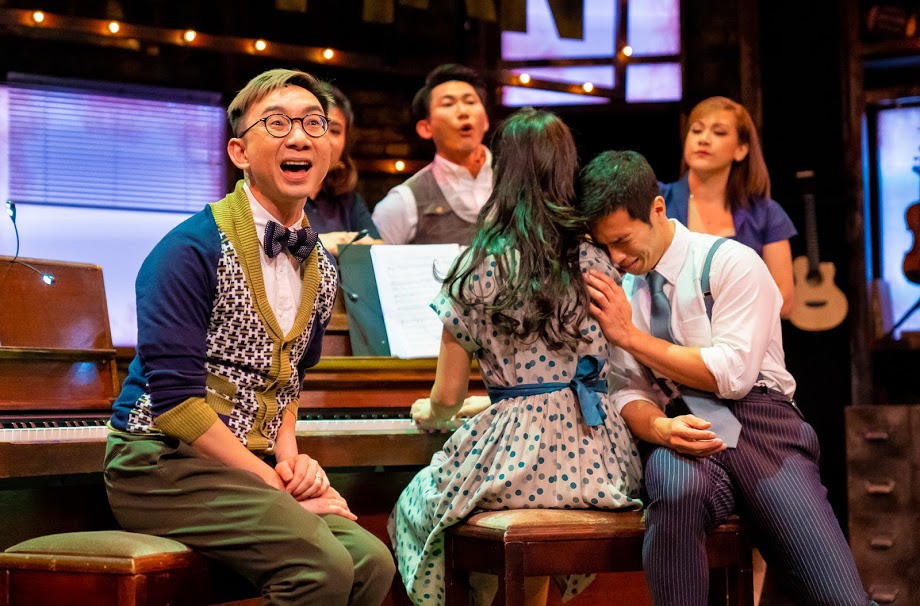 Each cast member has been directed to play to their strengths, and given a character to stick with throughout the performance. As the dancer of the group, George Chan is given choreography that shows off his smooth movements and legwork, while still being able to hold a tune (and play the ukulele!). Multi-talented Aaron Khaled takes on the role of the suave younger man, sometimes playing the fool in his songs, expressive and full of life (in a couple of instances, he even shows off his athleticism with a cartwheel or two). Vanessa Kee often plays the counterpart to Khaled, as the young ingenue filled with hope and potential, and the two even share a couple of sweet moments in duets such as ‘The Dream I Never Dreamed’ (from Robbie Sherman’s acclaimed 2015 Edinburgh Festival musical Love Birds). 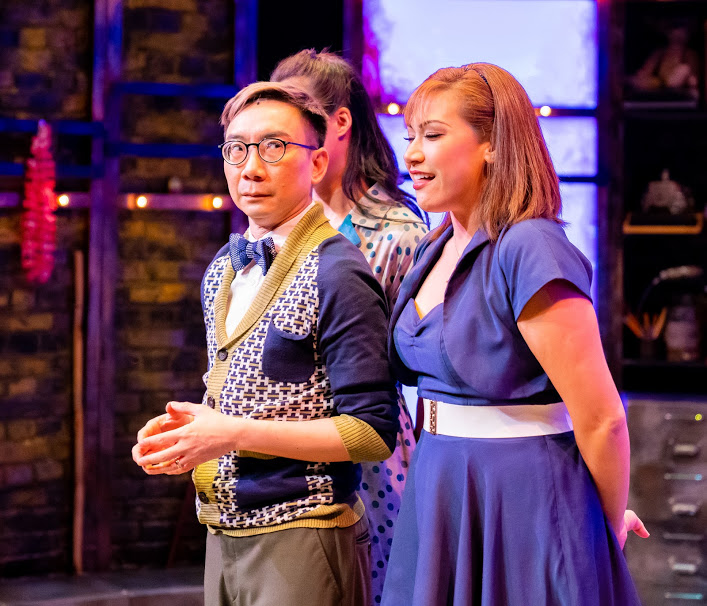 Seasoned performer Hossan Leong takes on either the seasoned veteran type-characters, or the kooky, off-kilter ones that let him show off his comedic range, particularly memorable as a French feline in ‘The Aristocats’ and as a squawking parrot obsessed with ‘Crunchy Crackers’. Even music director Joanne Ho is given her chance to shine in group numbers instead of simply being relegated to being a pianist, her voice crisp and clear. But it is Mina Kaye who steals the show each time she performs, a singer and performer in a league of her own. Whether she’s whistling along to ‘A Spoonful of Sugar’ or showing off her range and vocal control in ‘Tin Whistle Tune’, Mina’s performances are always on point as a main or a support, hitting all her notes and rightfully garnering all eyes on her each time she steps onto stage from the sides, and alone is reason enough for seeing this show. 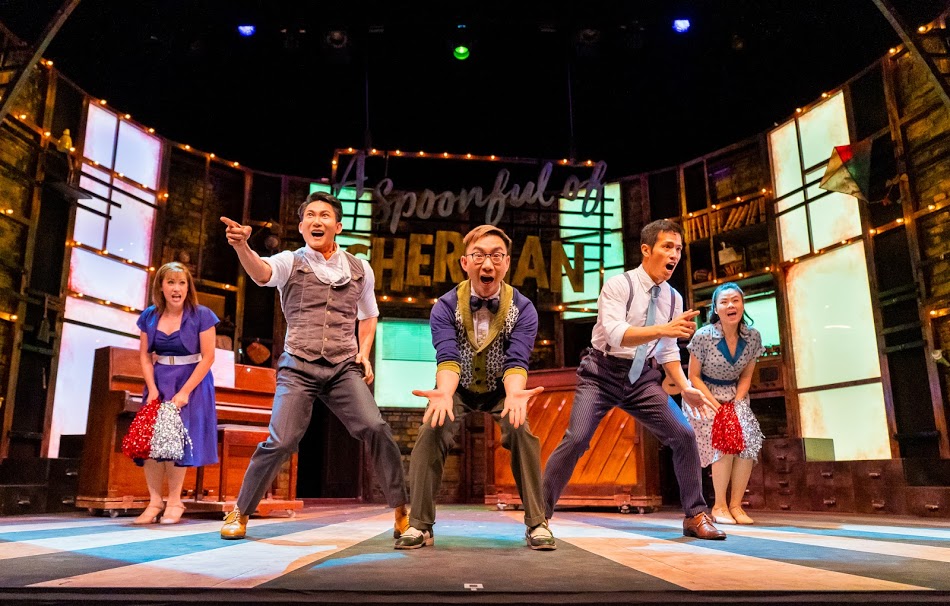 But honestly, the greatest joy of A Spoonful of Sherman comes from how director TJ Taylor has such a firm grasp on how to bring out the best in each performer and as an ensemble. Across the numbers, the cast are paired up with each other well to match their voices to each song, and support each other throughout the performance. Even when they’re not cast in the spotlight, as ‘ensemble’ members, there is a powerful chemistry and camaraderie they share that makes each song a delight from start to end, infectiously catchy, with their voices melding into a glorious symphony of sound to bring the Sherman’s tunes to life. 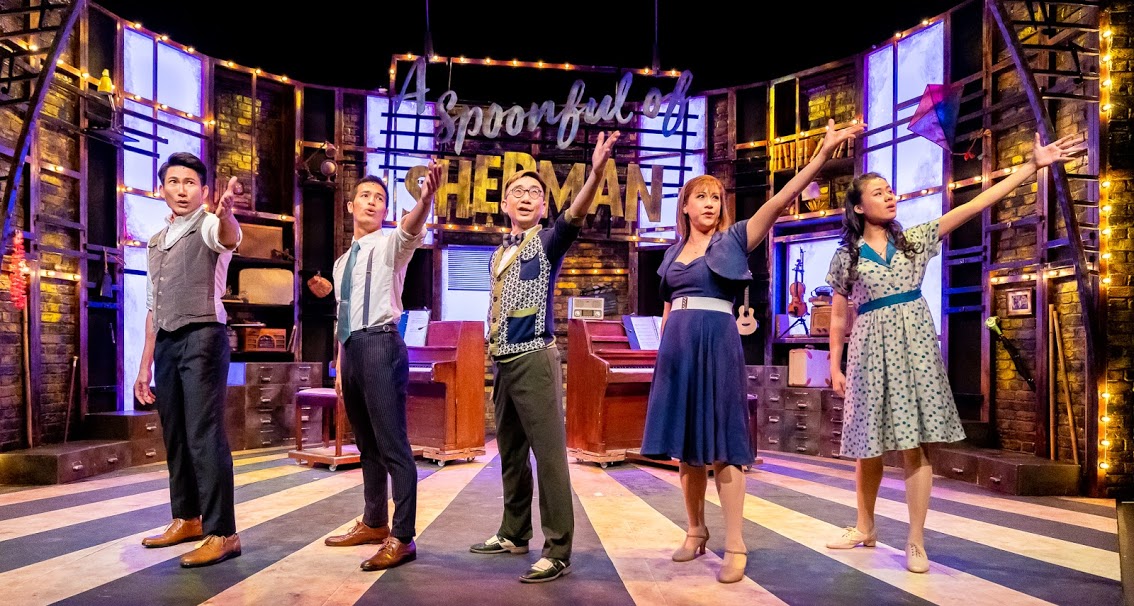 Ending on a catchy Chitty Chitty Bang Bang medley, the performers mention how despite their fights, the Shermans would always find it in them to make up after and work together again, never allowing their differences to tear them apart. In a world that is so dark and so devoid of hope, A Spoonful of Sherman is precisely the kind of show one needs to see to remind us that ‘It’s A Small World After All’, and that we can and will find the optimism that lies within us all. The cast members display a genuine smile and emanate joy throughout the entire performance, a feeling that spreads to us easily. And with Robbie Sherman himself in the audience giving his stamp of approval, Sing’theatre’s A Spoonful of Sherman is a necessary production to watch for its sincerity, certainly its singability, and the simplicity of its messages of life and love that leave us happier with each hit song after song, the antidote to a stressful day and sheer happiness encapsulated into a single show.

1 comment on “Review: A Spoonful of Sherman by Sing’theatre”