★★★★☆ (Performance attended 1/12/19)
Fairytales as you’ve never experienced them before – now with a feminist twist.

LONDON – Most of the fairy tales we grew up with are problematic in their own right, with far too many involving princesses pining for princes riding in on a white horse, or damsels in distress awaiting a hero to come save them. 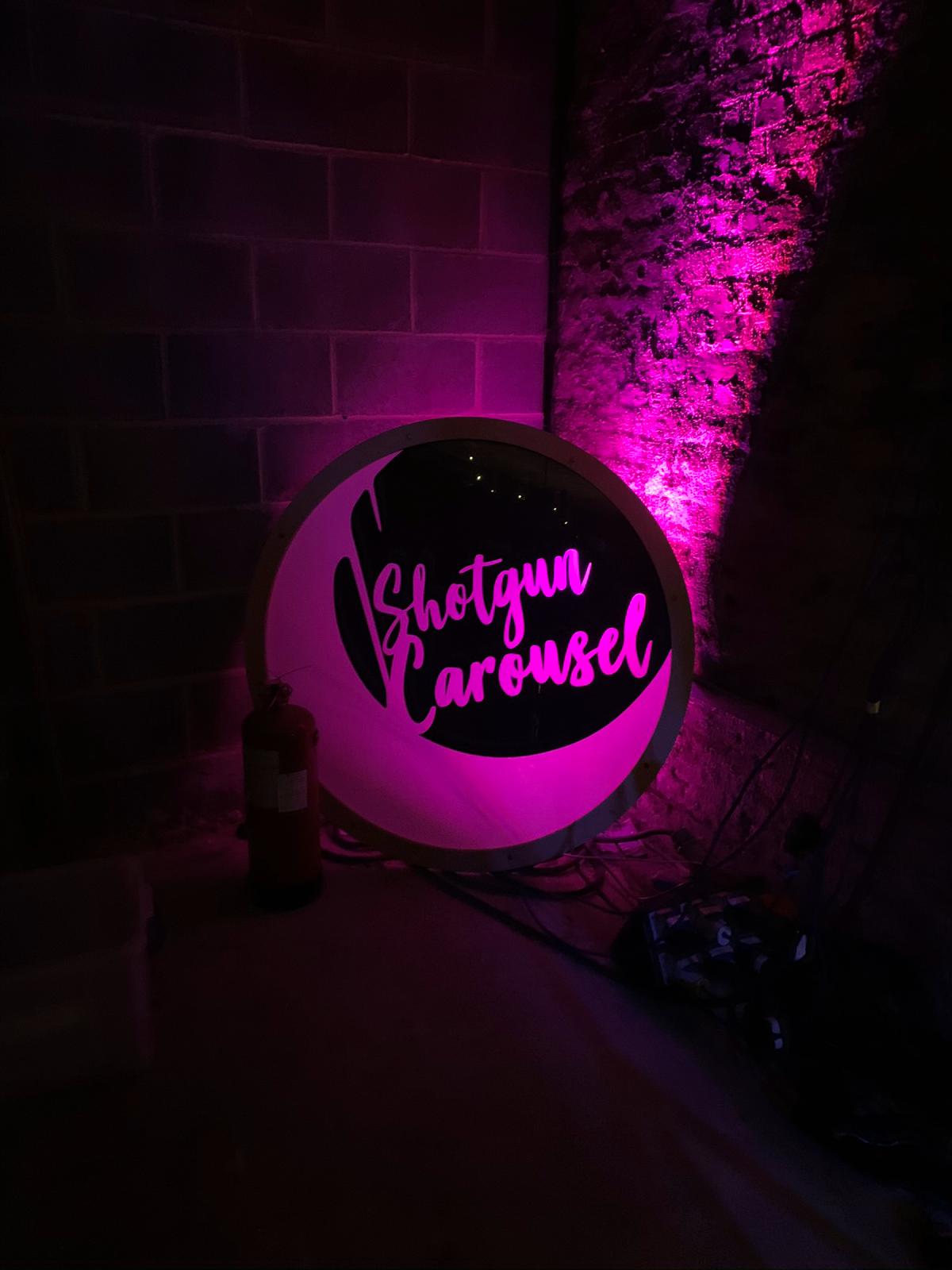 With Red Palace, Shotgun Carousel returns to the Vaults to reclaim these narratives from a distinctly feminist perspective, empowering princesses, little girls and even mermaids as they go against their prescribed destinies in one promenade immersive experience that brings together cabaret, circus, and dance into one singularly unique show. 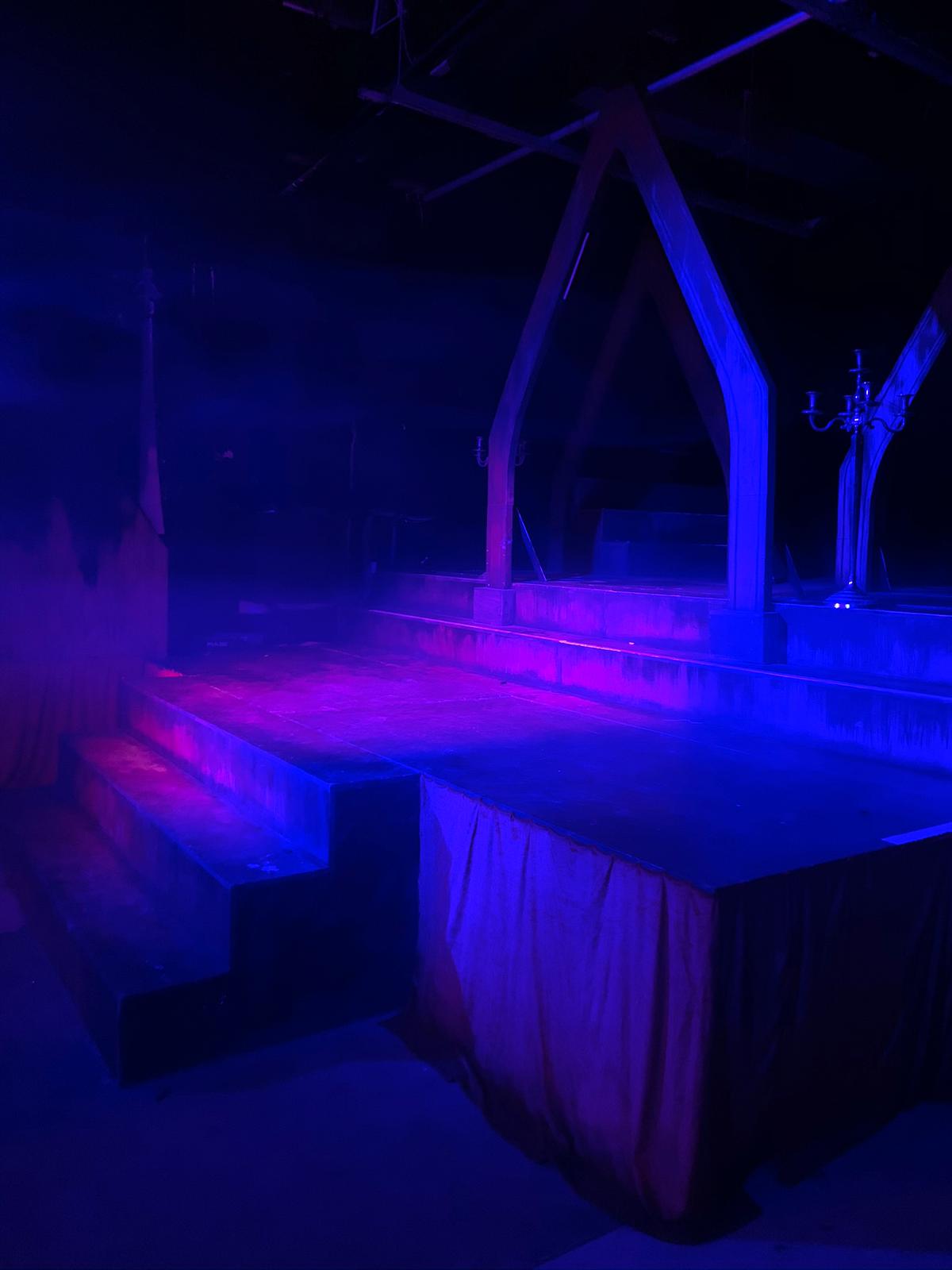 Conceptualised and creative produced by Laura Drake Chambers, in addition to the performance, Red Palace also features a banquet from gastro-storyteller and Masterchef semi-finalist Annie McKenzie, whose menu ties in to the storyline and themes of Cressida Peever’s Gothic script. Directed by Celine Lowenthal, Red Palace sees audiences invited to the titular venue for a Gothic masked ball, as they meet the court of characters occupying it, and get a chance to discover other secrets each of the rooms hold. 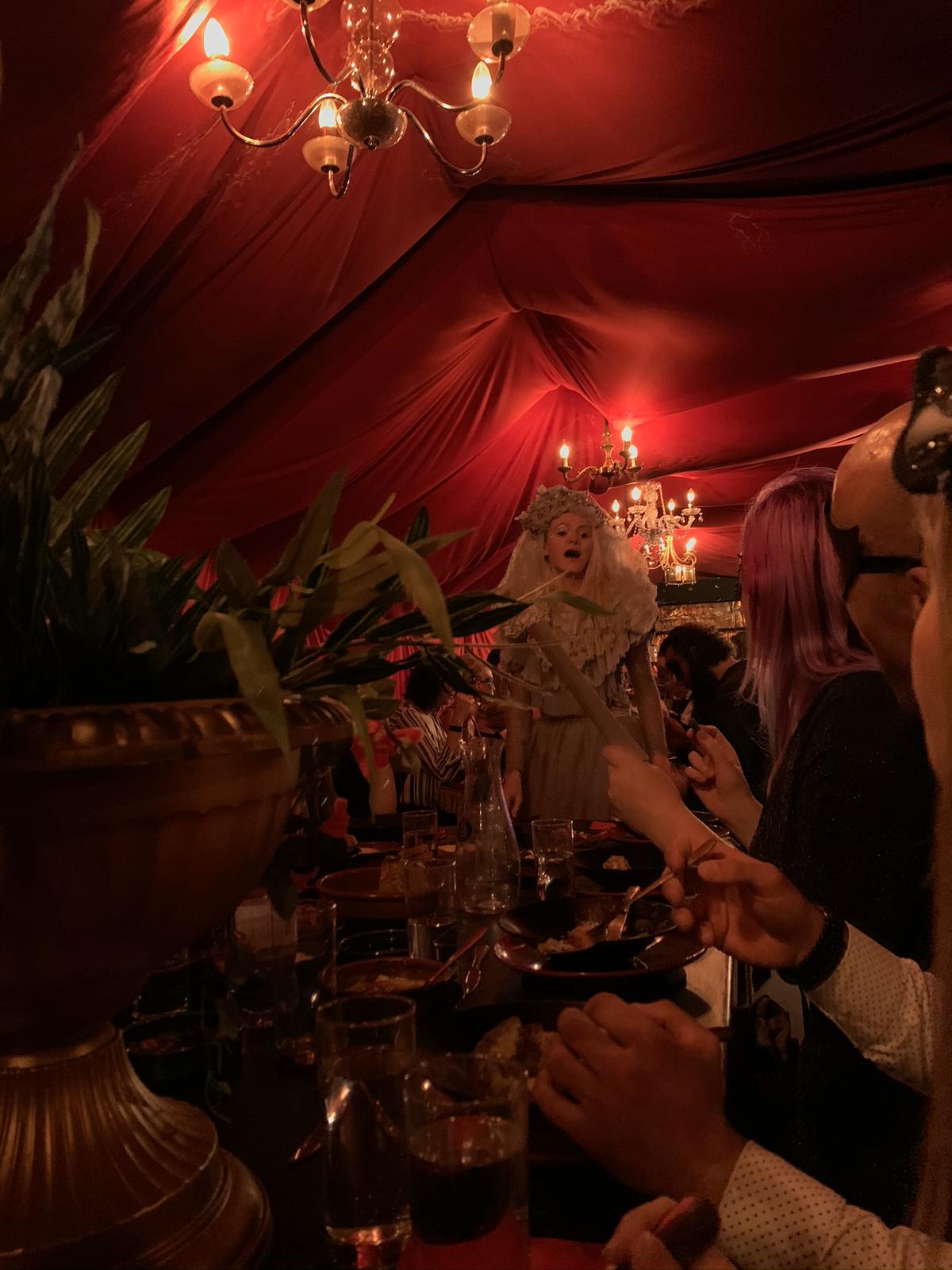 But as fairytales go, it’s certainly not going to be a straight and narrow path, even in finding the entrance alone. As we approach the Vaults, we are tasked to find the entrance, before being checked at the door by a guard to ensure we didn’t bring anything forbidden to the palace. 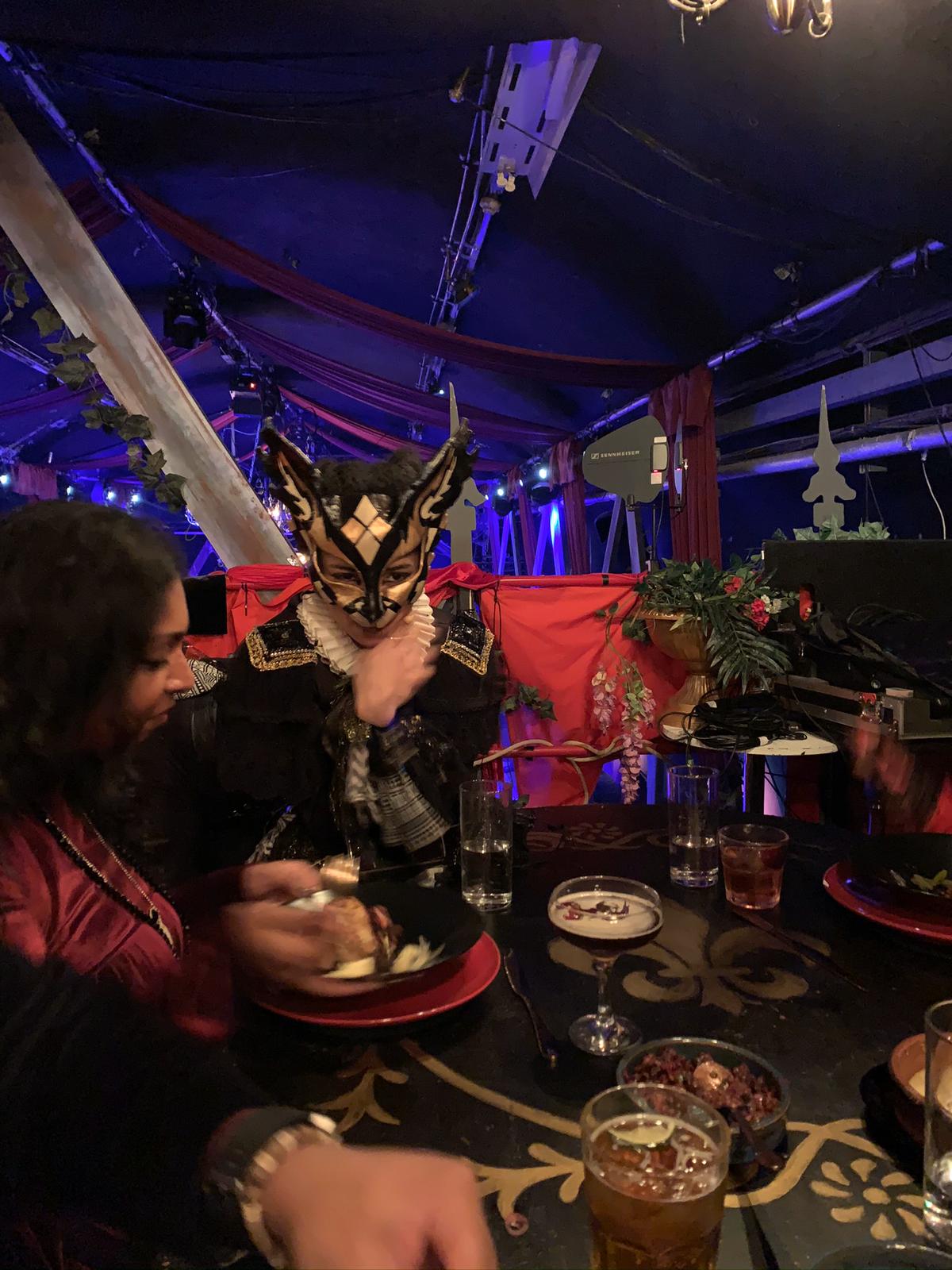 As we enter the space itself, it feels as if we’ve been transported to a different world. Checked in by the concierge and made aware of the dos and don’ts of the performance, we were handed a mask, and get ready for the masquerade party of the year. 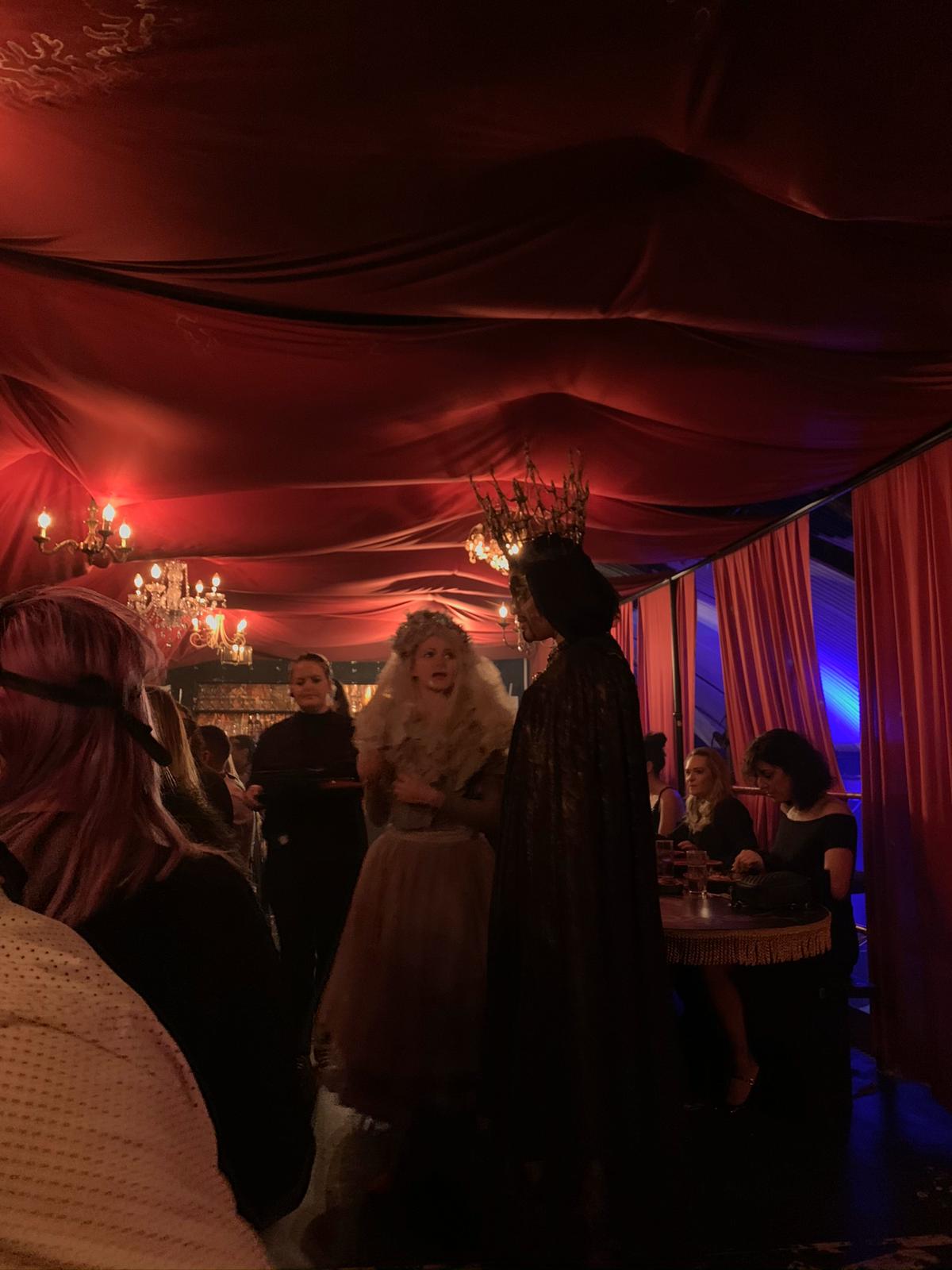 Led to the dining hall, we were ushered to our seats, and served homemade honey Irish soda bread with whipped rosemary butter, sea salt crystals, balsamic vinegar and olive oil. And to provide an extra dose of luxury, we were also served spiced lentil and roasted beetroot salad with pickled shallots, along with a wonderful aromatic rosemary and garlic baked Camembert with cornichons that filled the air with a lovely aroma. 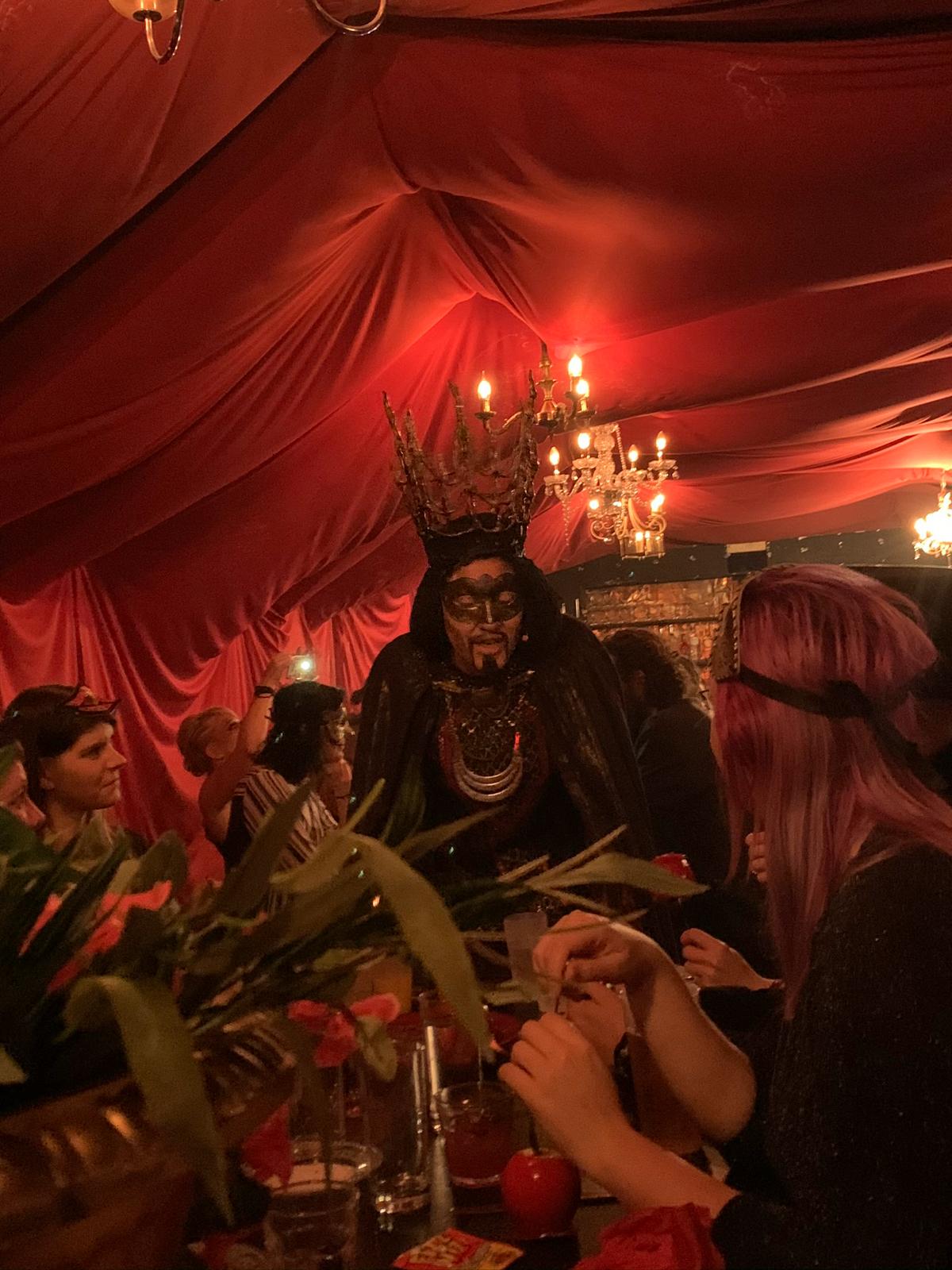 The atmosphere created by Shotgun Carousel felt grand, with appearances from palace subjects who told us each of their backstories, further allowing us to sink into the world of Red Palace. We were then served our main course: a slow cooked, rolled cumin and coriander-spiced breast of lamb with a pomegranate glaze. The lamb was well-cooked, succulent, raunchy, and full of flavour. Served with a coconut yogurt and fresh pomegranate, this helped create a contrast to the bold flavours of the lamb. 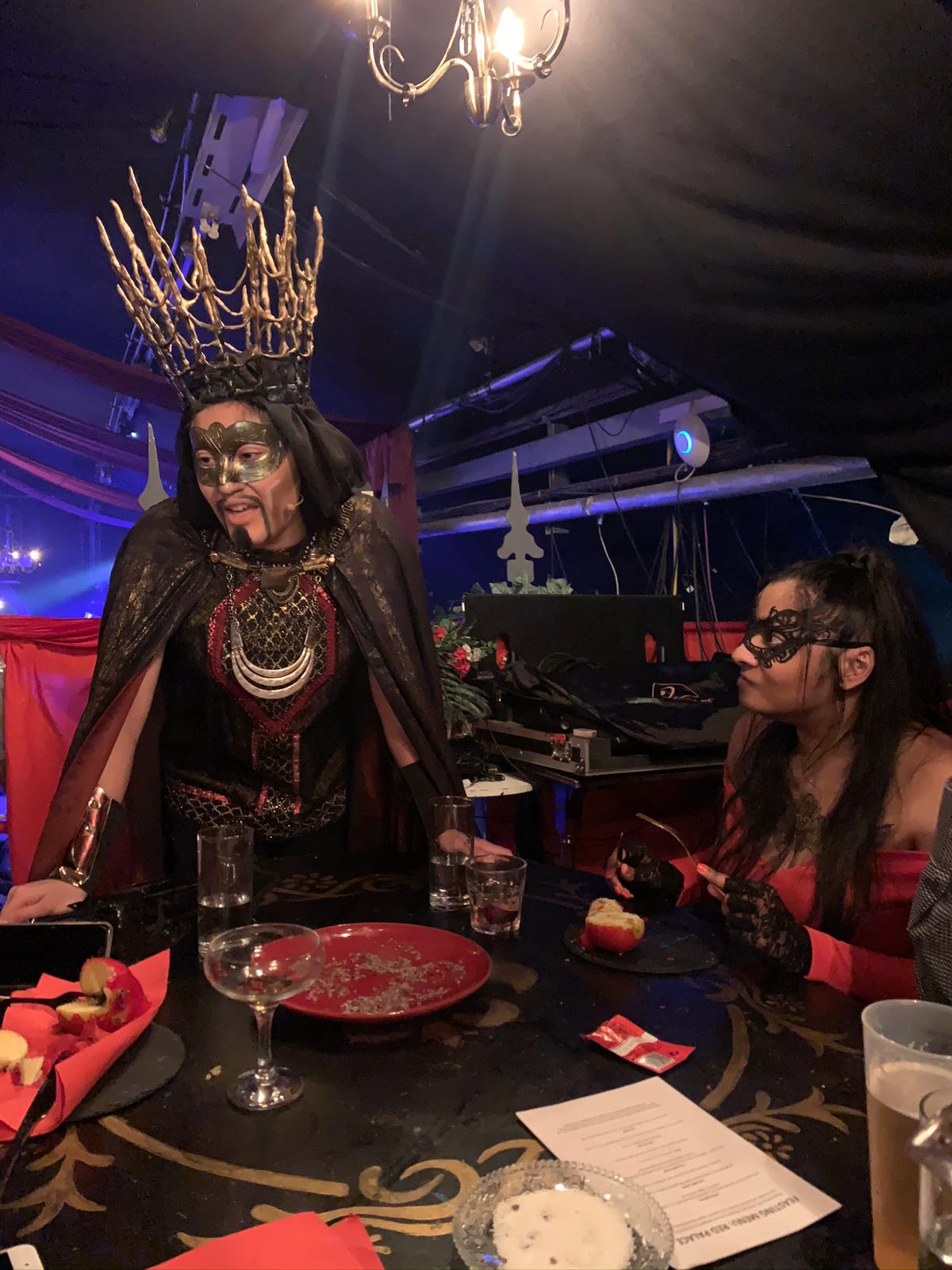 Along with the beautifully-cooked, crispy shallot tarte tatin. The thyme atop helped balance the dish, while the onions were well-caramelised and their aroma permeated the air. Finished with roast potatoes and a slaw of red and white cabbage, fennel and celeriac with pomegranate, our main course was satisfactory and filling. 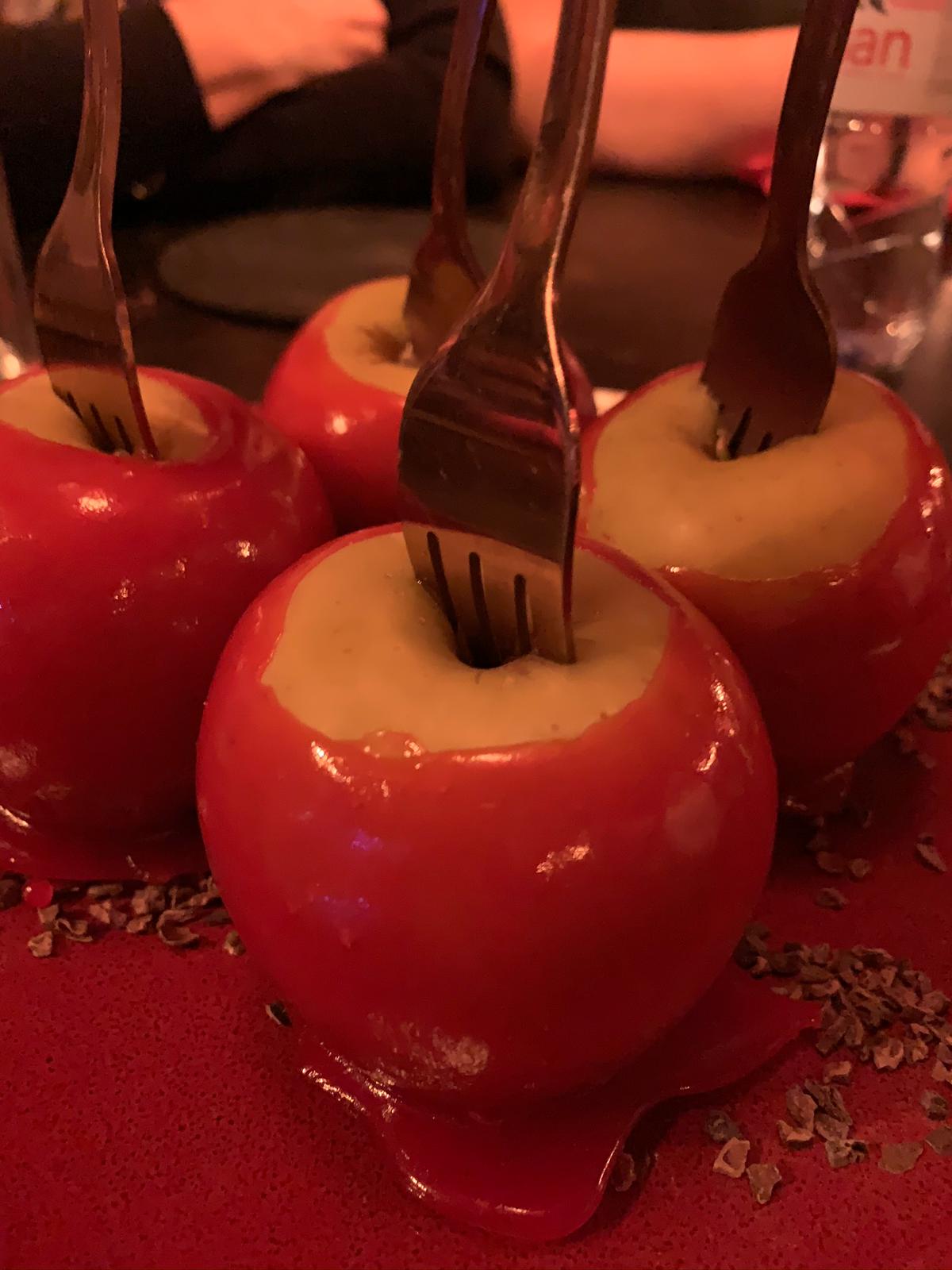 At this point, we were now introduced to the prince, who came to our table to introduce himself and entrust us with our next task. We are served our dessert: a salted caramel toffee apple with coconut, cocoa nibs and popping candy, an apt end to a wonderful meal and clearly putting us in the right mind to what was to come. 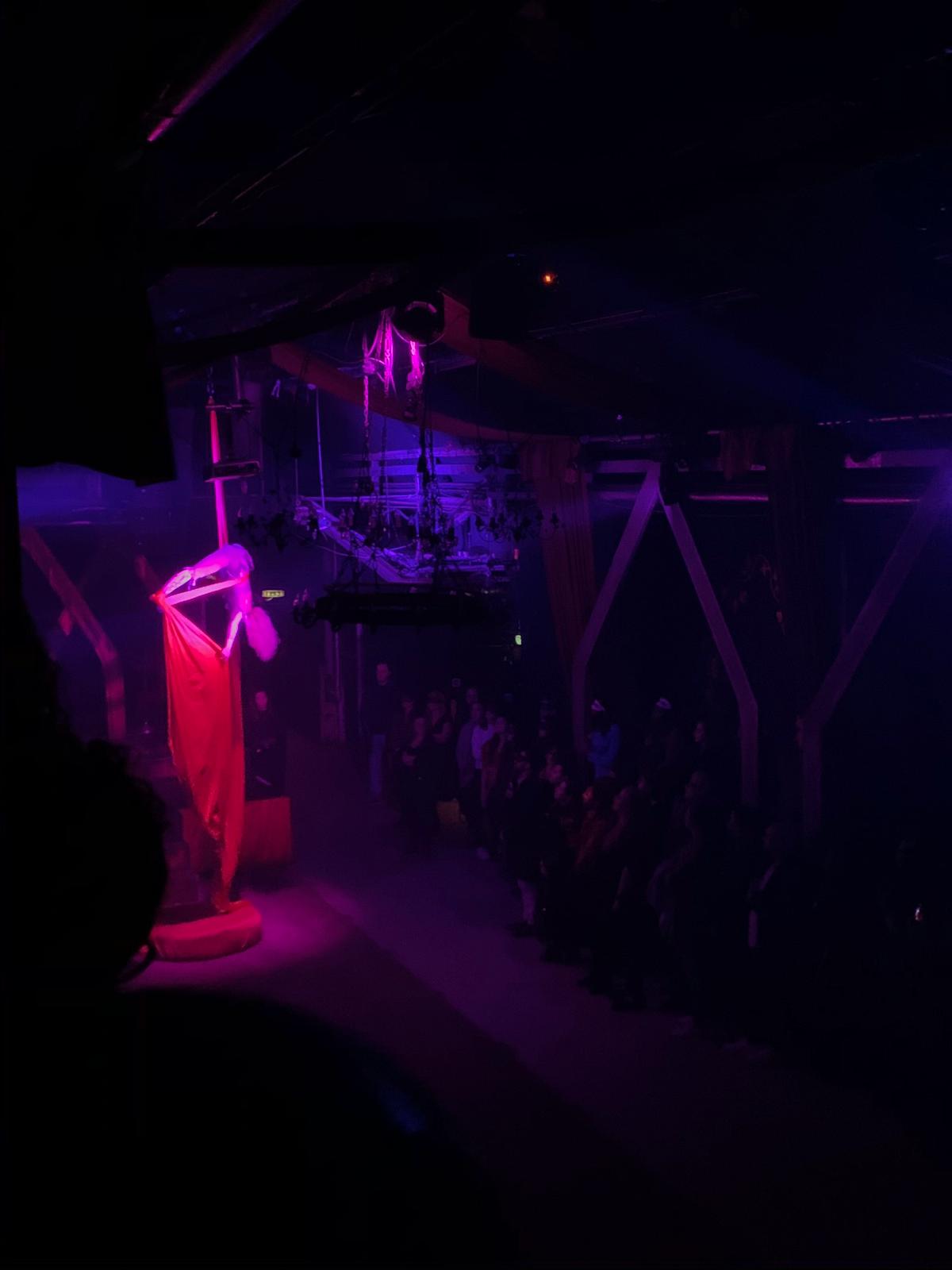 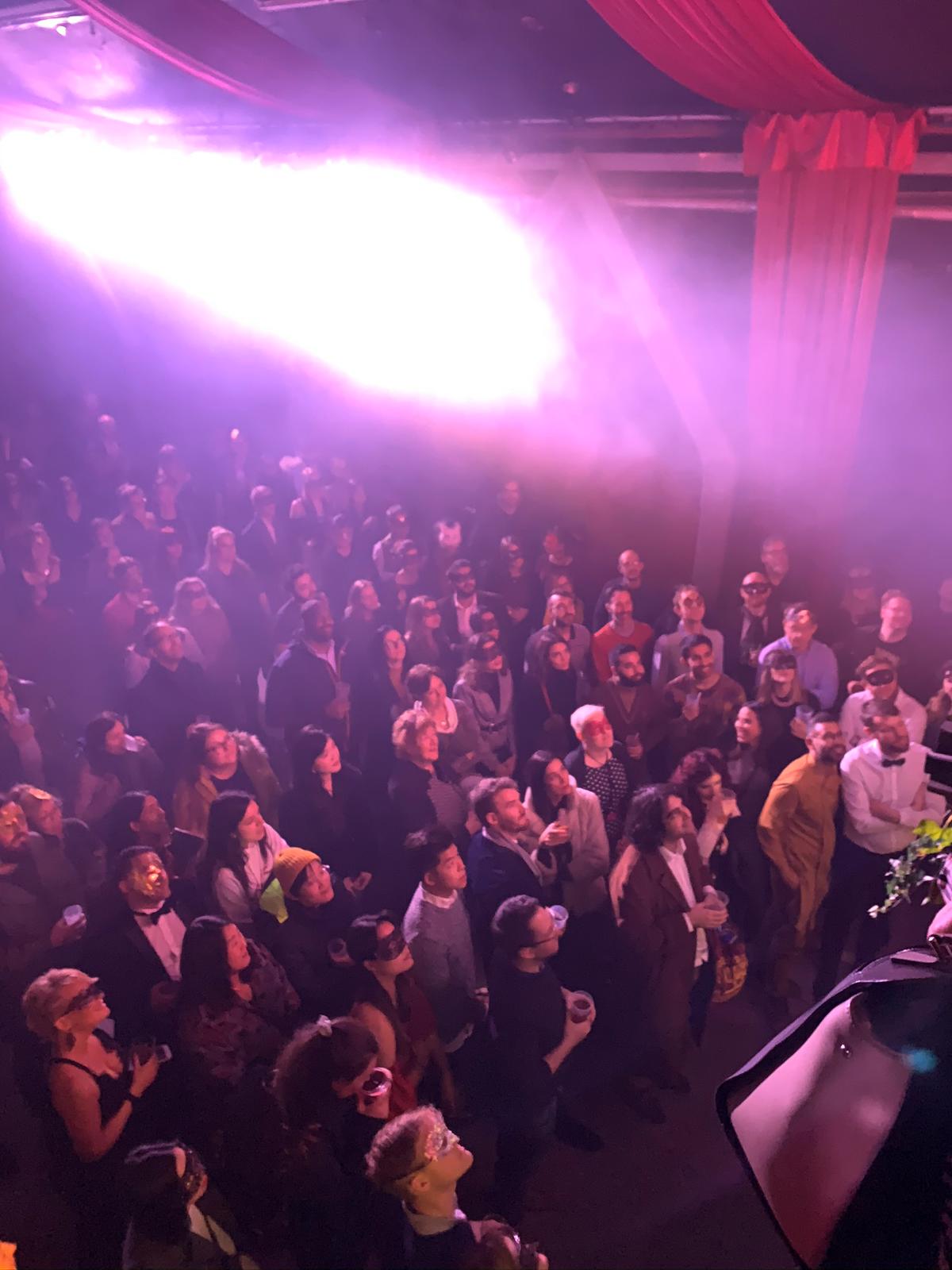 This was followed by some magnificent silk work, as the performer cascades down the silk, showing off her power and finesse, mixed in with sexiness and raunchiness. Fully in the party mood, the prince now takes the opportunity to address us, instructing us to put on our masks and get acquainted with each other – after all, it’s a ball! We were then led away to explore different areas of the palace, and warned of the imminent Red Plague, and protect the prince from it. 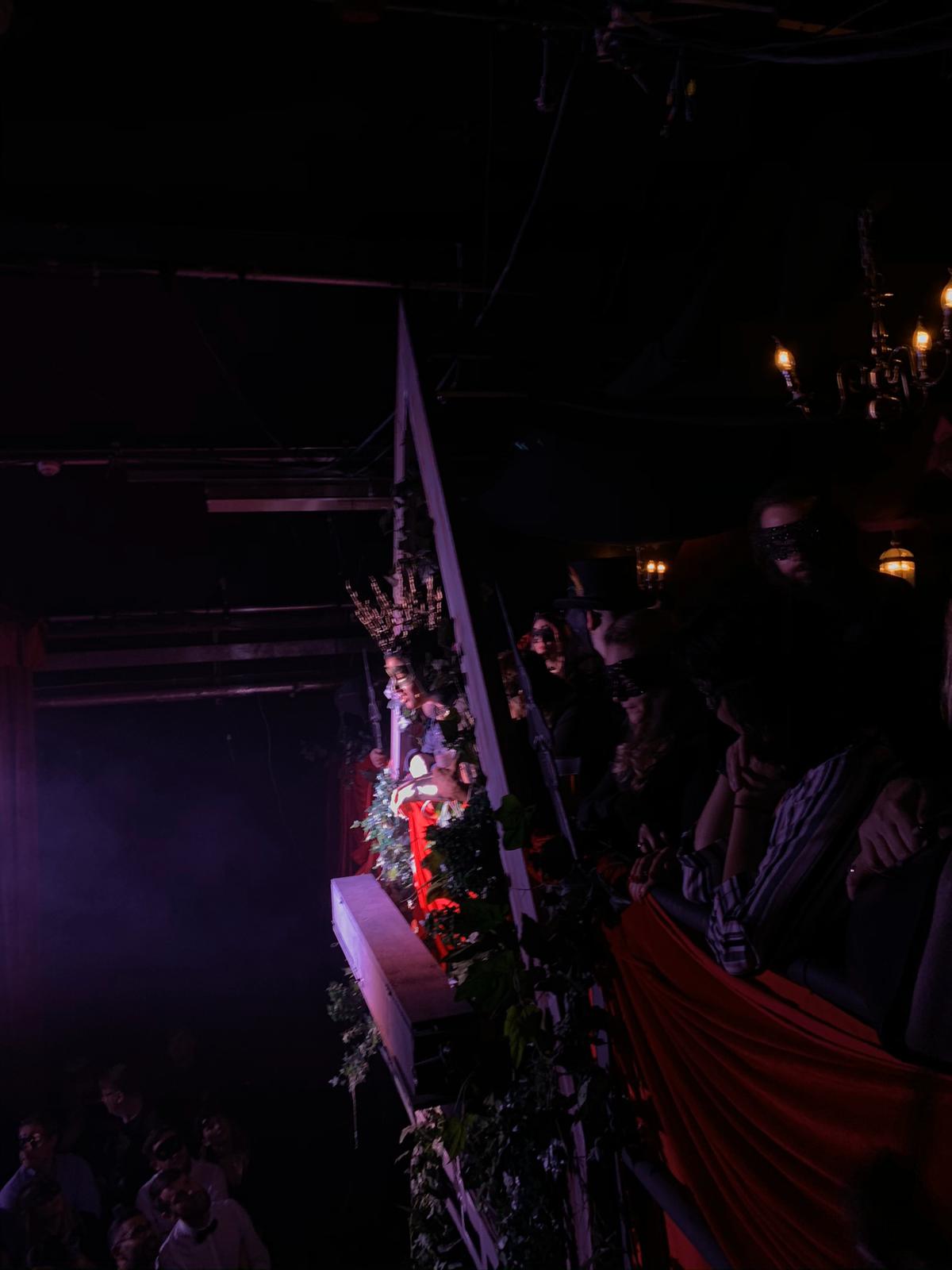 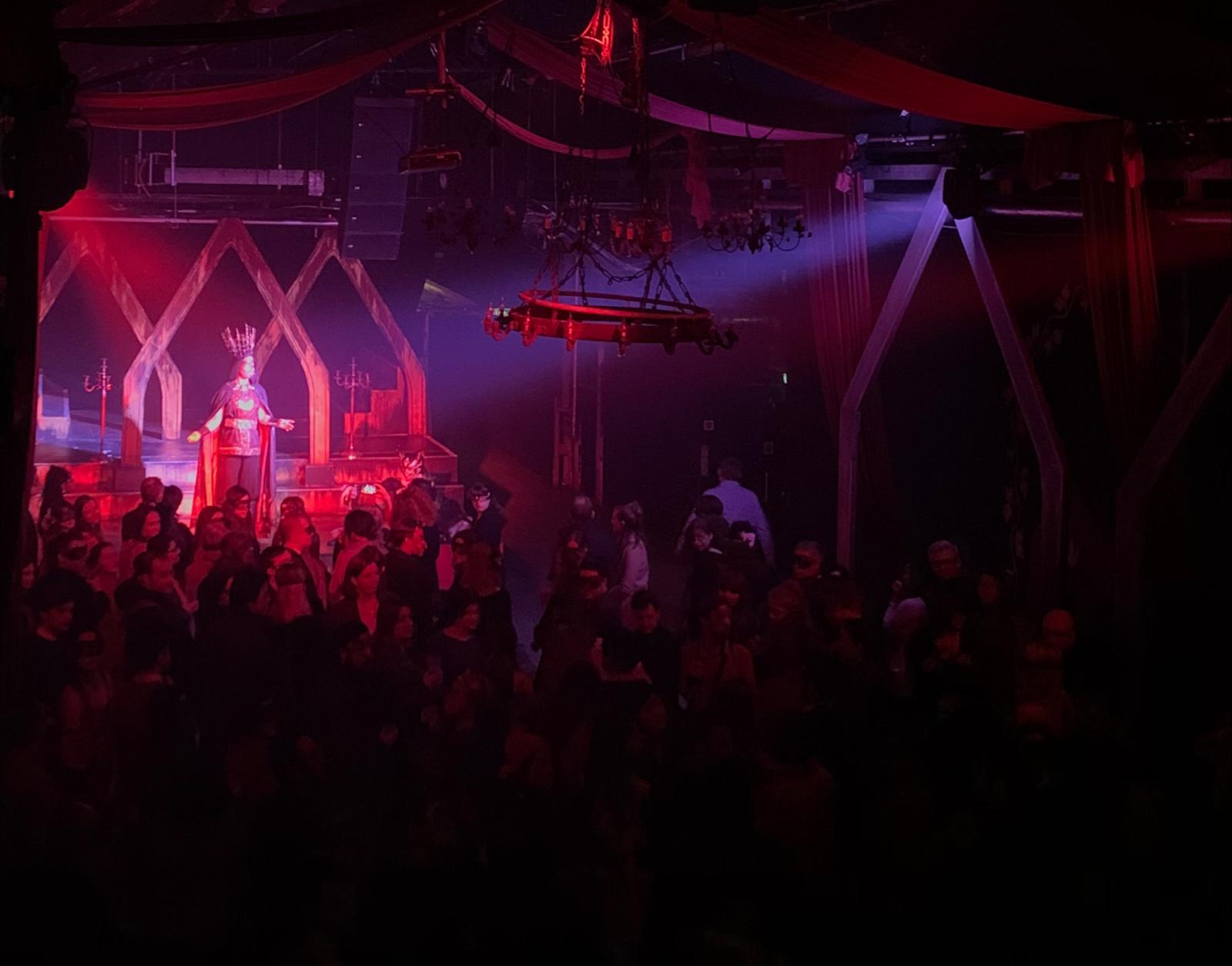 Entering our first room, we found ourselves in a forest, as we encountered a woman armed with a bow and arrow. Swearing revenge on the prince, we soon realise that this is Red Riding Hood, with a wolf lurking behind, and she tells us about her truth and experience with the prince. Instructing us to close our eyes, the dark room we’re initially in begins to become brighter and lighter, and as we open our eyes, now better adjusted to the change in lighting, this same light represents how we are now clear of our mission. We head back to the ballroom for more instructions, before proceeding to the second room. 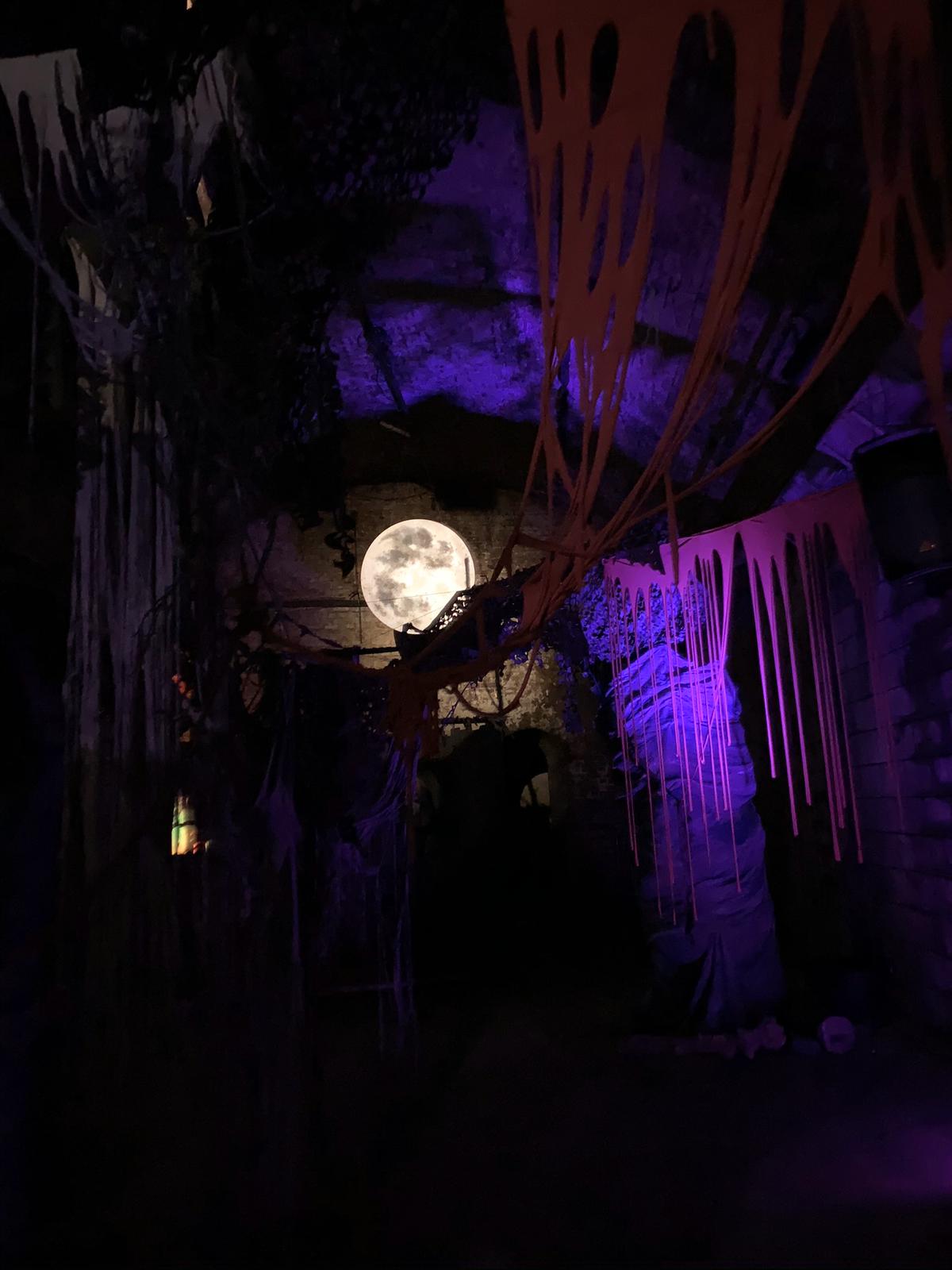 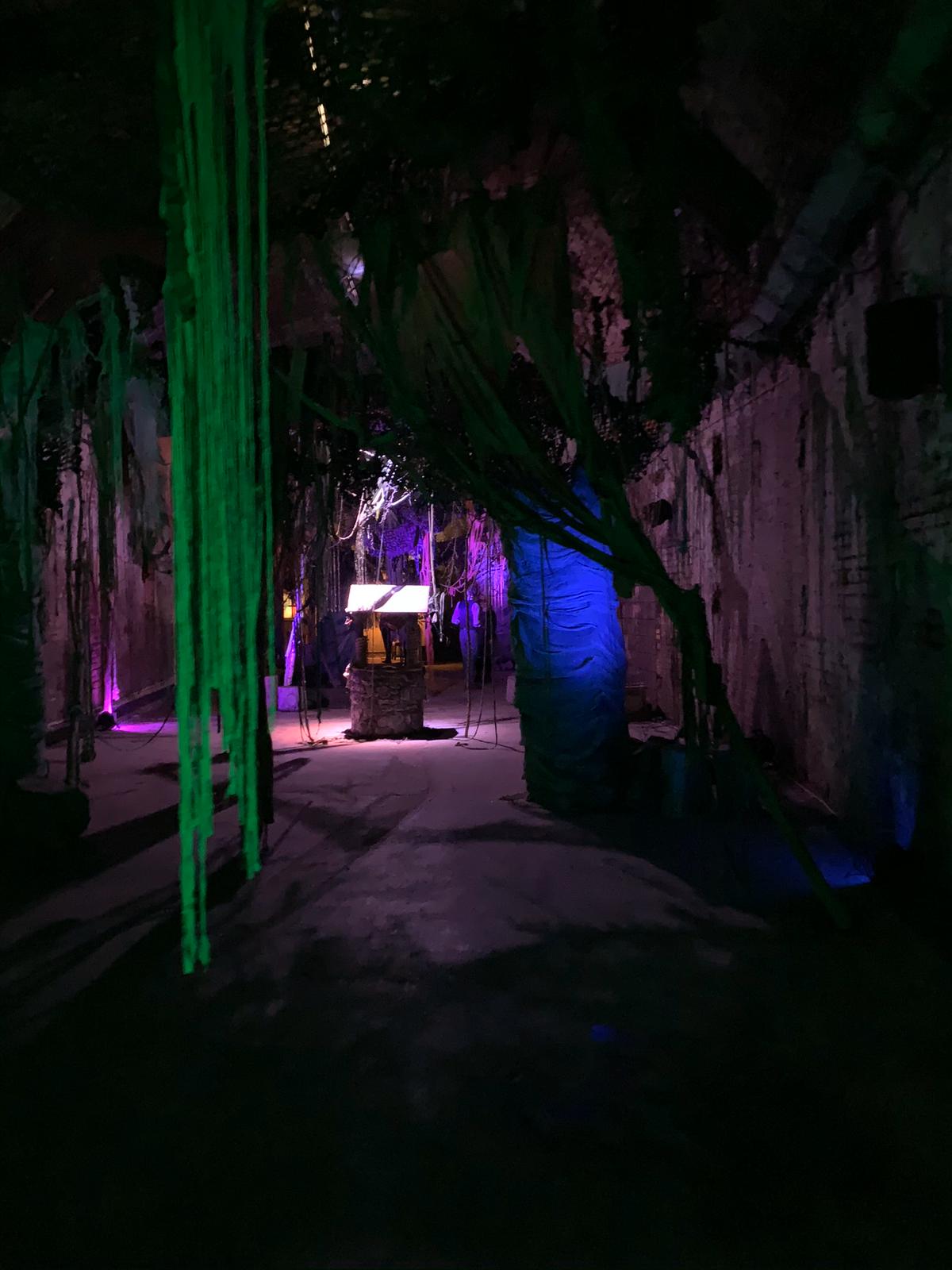 Here, we find ourselves at a slumber party, and are introduced to Snow White. With cool hair and great fashion sense, she reveals her obsession with the prince, and as she chants ‘mirror mirror on the wall’ at the mirror, all she sees is the prince and her together. Keeping us in the slumber party mood, Snow White teaches us a couple of dance moves, from the macarena to more sophisticated movements, before switching on the music. Appropriately, it’s Madonna’s ‘Material Girl’ to represent Snow’s superficiality and desire for everything. 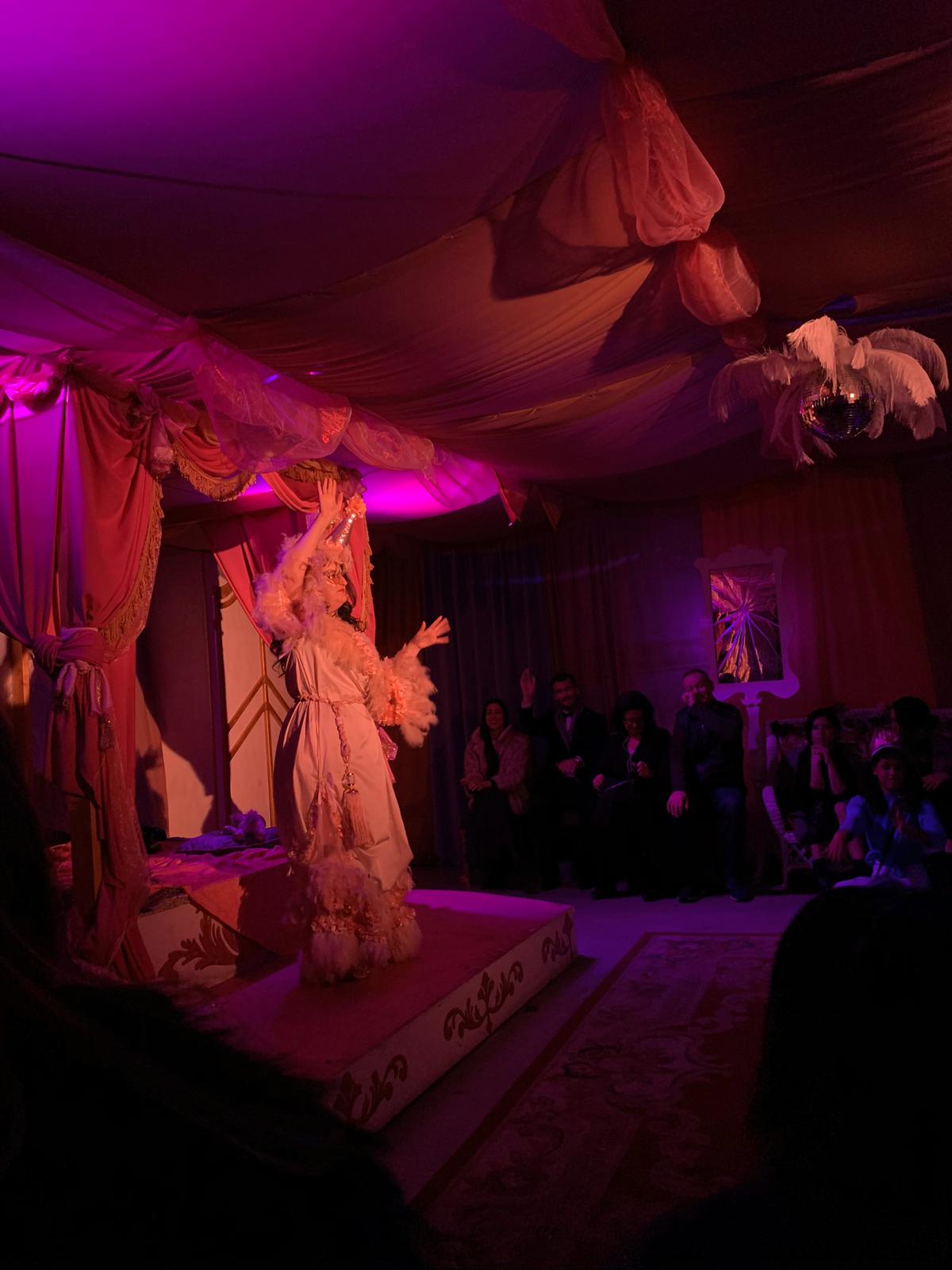 Getting us to dance along, we were kept engaged throughout, before we are interrupted by the appearance of a ragged looking intruder. While certainly looking like a prince (albeit a poor one), upon being questioned, he confesses he is not, and has instead found a crown from elsewhere, perhaps the pauper from The Prince and the Pauper. 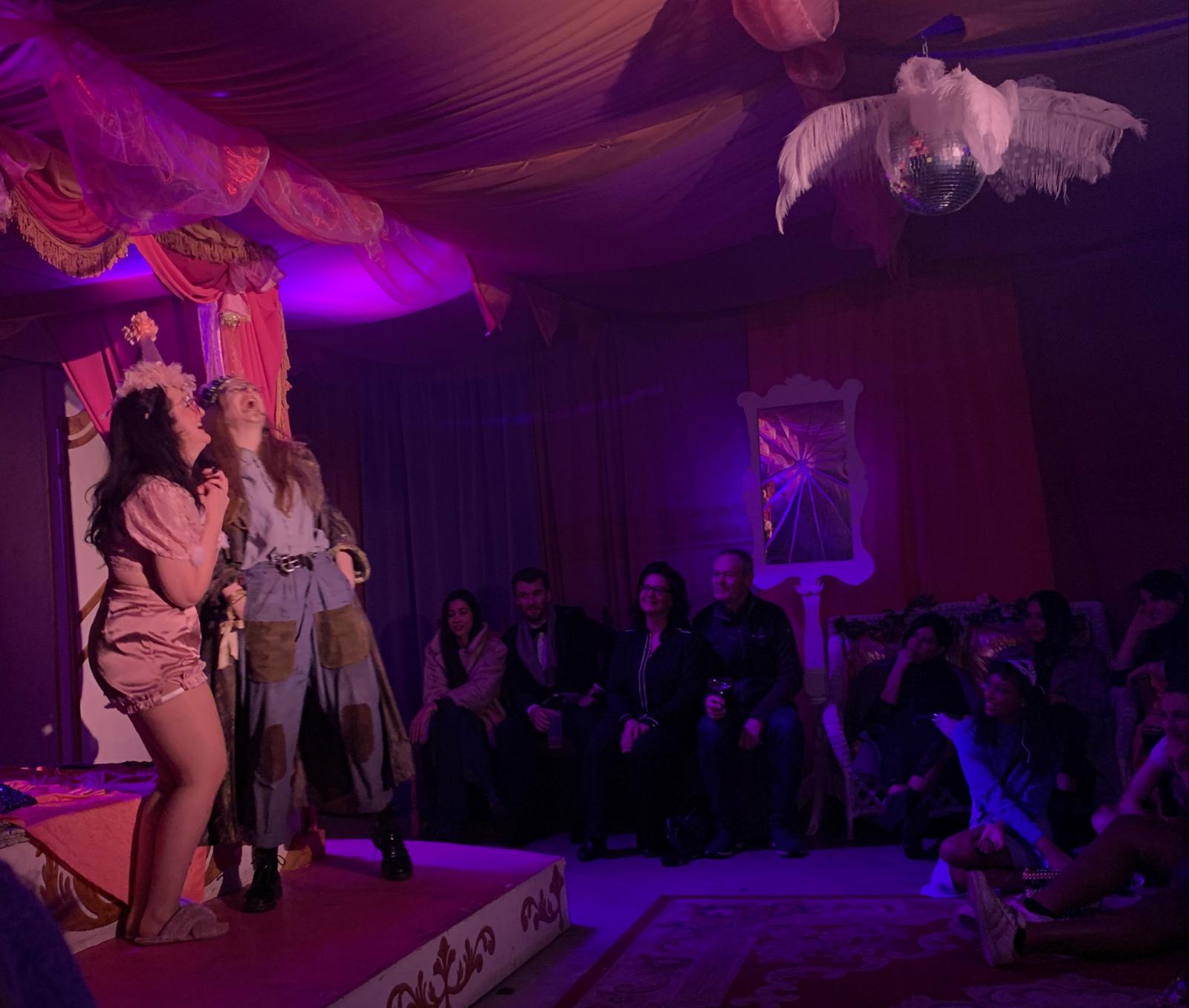 Snow White ends her set by once again emphasising how much she desires the prince, before performing a cabaret number, lip-syncing to ‘Material Girl’ energetically. She changes, and gets herself ready for her date with the prince. 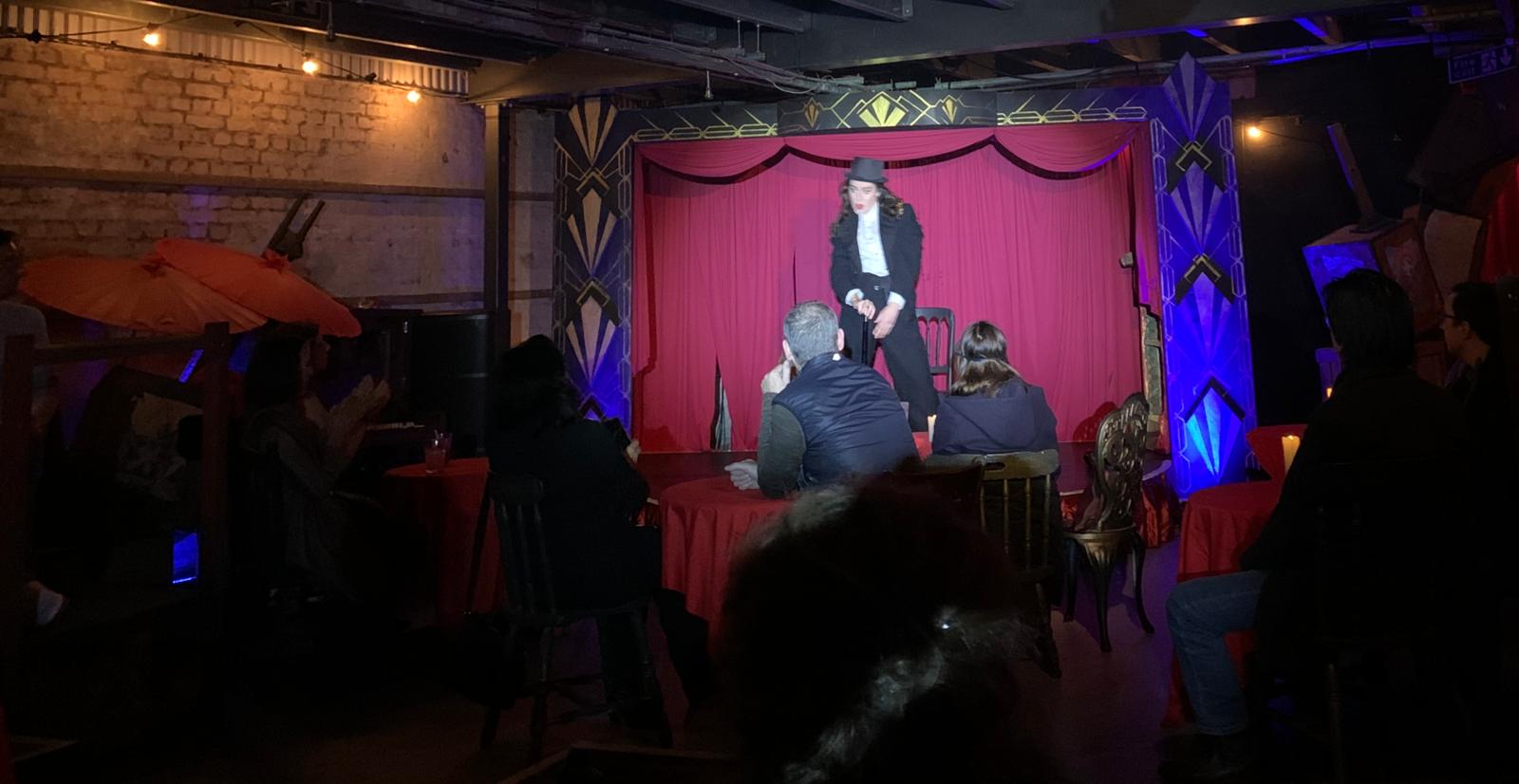 For our next room, we’re given a choice between a gingerbread house or the seer. Choosing the house, we’re greeted by Hansel, who welcomes us to the house before we meet Gretel. 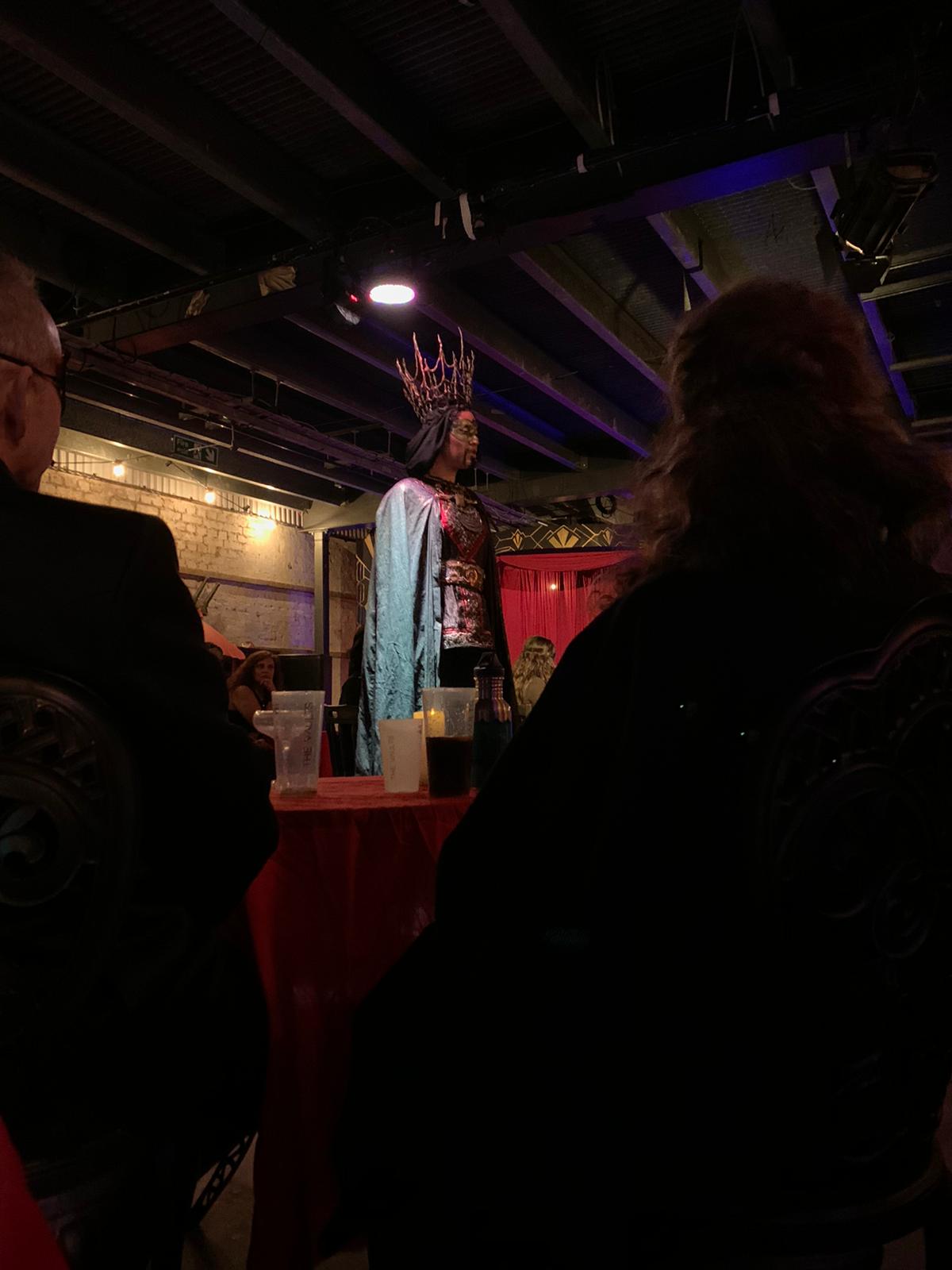 As the performance began, the siblings began dancing to Lorde’s ‘Royals’, keeping us entertained, before we are interrupted by the wolf. Demanding to know what’s going on, the prince too barges in. Gretel tells them nothing is going on, and pleads for mercy from the prince, before we are told to quickly exit the room. 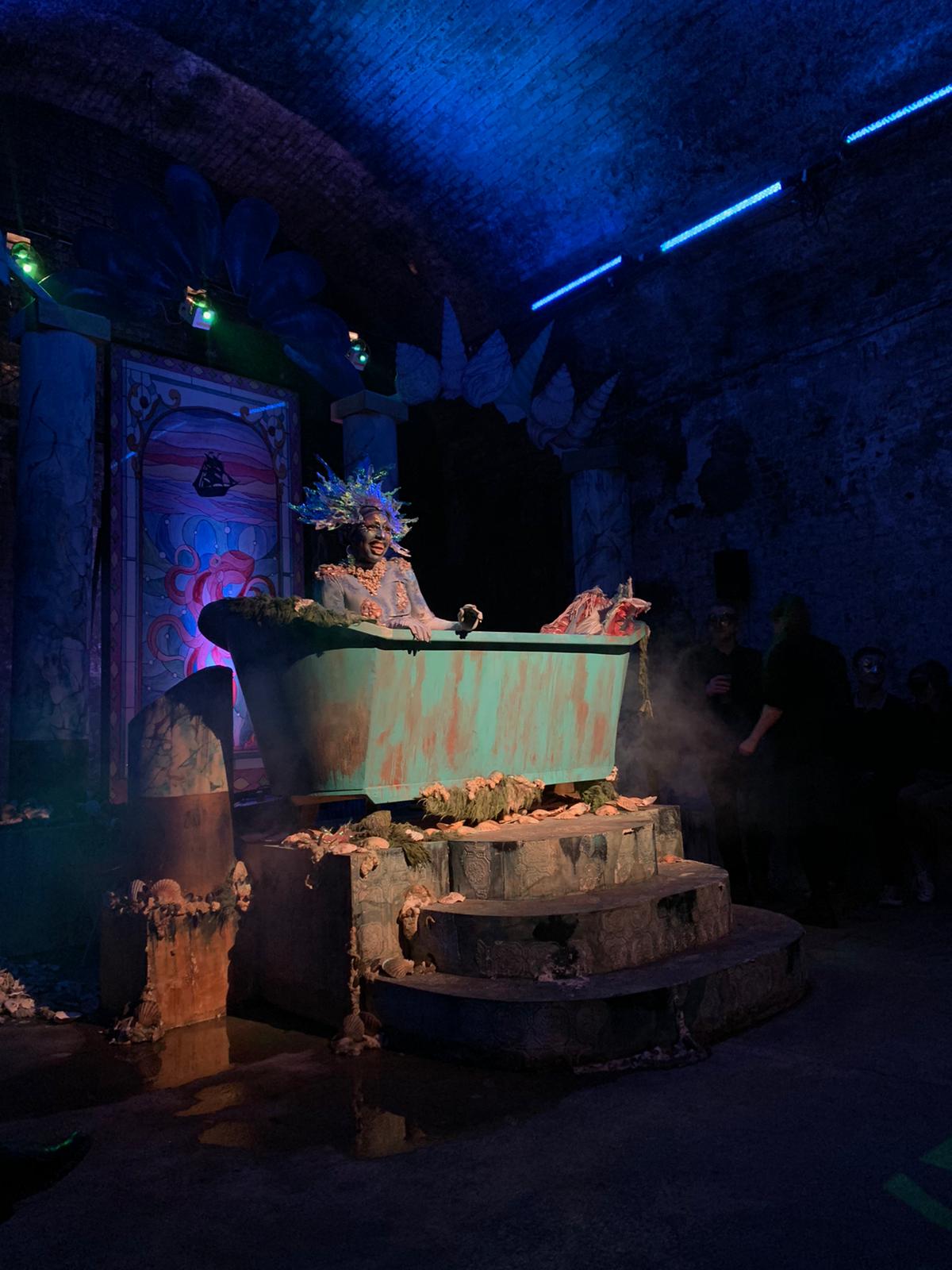 For our final room, we find ourselves in a bathhouse, with the little mermaid lying in a bathtub. Telling her a compelling story while singing “Oh My Love, Oh My Darling”, she emphasises how much she hopes her love stops by for a soak in the tub. With no water in the tub, that dream seemed more unlikely that ever, before we were led out of the room for the final showdown. 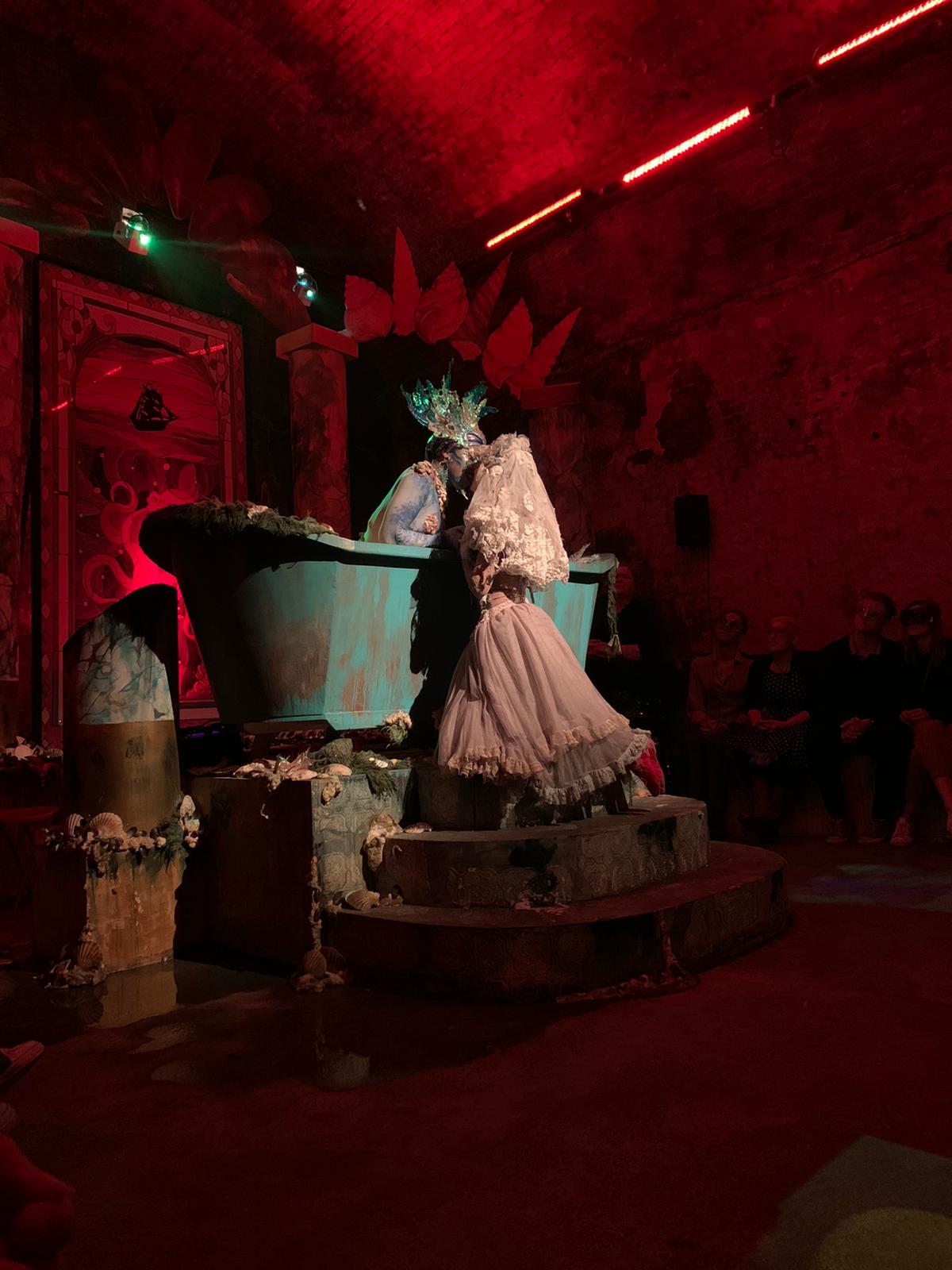 Now back in the ballroom for the final scene, the characters gather for a final showdown before our heroines emerge victorious. We know that all is right in the world, the wicked slain and the good, triumphant, as we arrive at a grisly, but ultimately, happy ending for this macabre fairy tale. 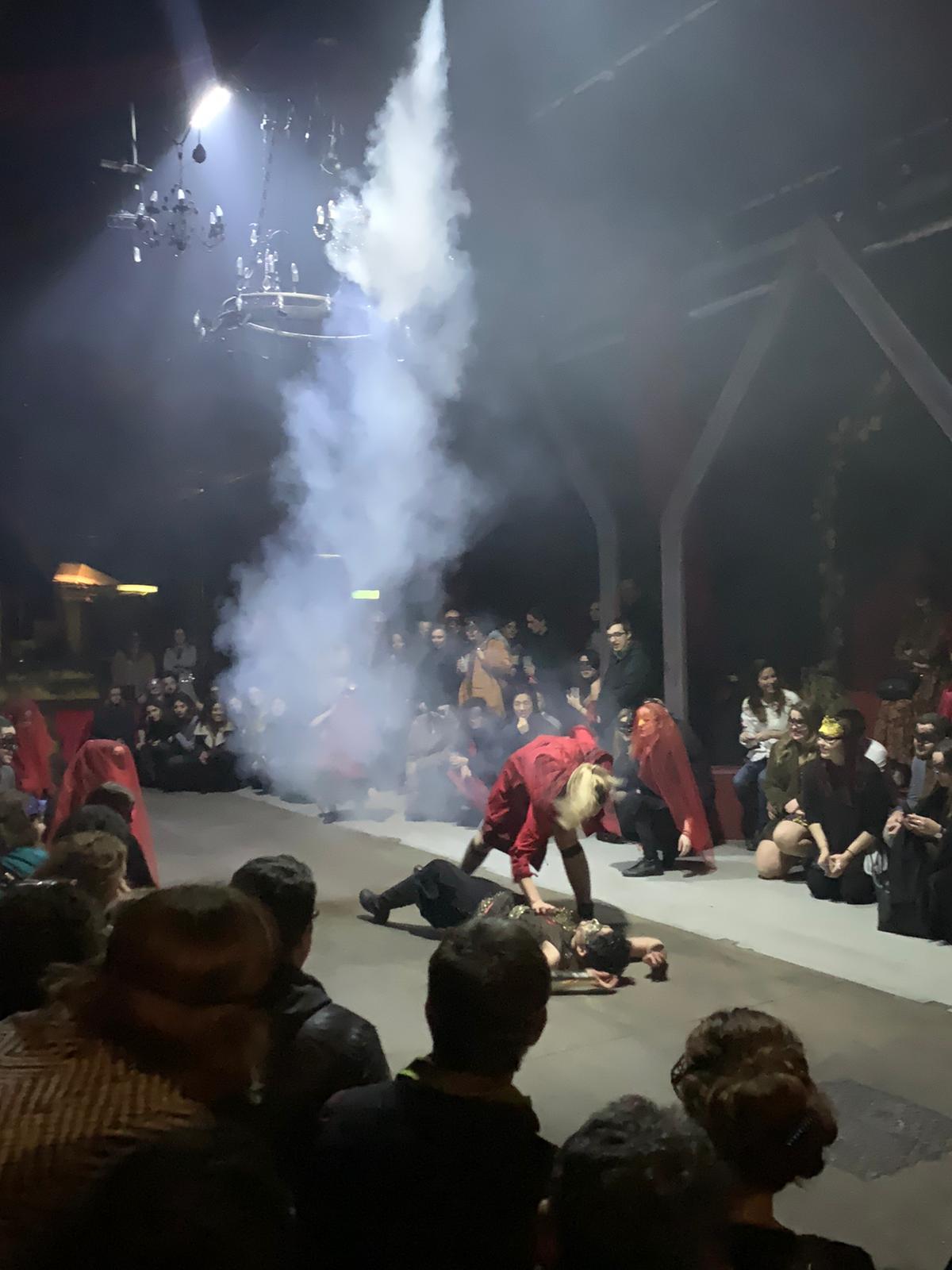 With strong design elements (set and costume by Maeve Black, art direction by Thomas Kirk Shannon, sound by Alex MacKenzie and lighting by Michelle Etherington), a compelling alternative take on familiar fairy tales, and an all-around strong performance from the cast, Red Palace makes for a unique night out that mixes in the darkness of Edgar Allan Poe with the narratives of the Brothers Grimm and Hans Christian Andersen. Touching on pertinent issues of power, duplicity, and the complexity of identity, Red Palace is raucous in its celebration of the audacious, unexpected and joyous, and a stellar piece of immersive dining from Shotgun Carousel.