LONDON – Joe Sellman-Leava is an artist who’s concerned. Concerned about a great many things, from issues of immigration, to issues of masculinity, and even issues of toxic fandoms. But across all three of his works, one thing that always remains constant is the personal voice, and using that as a means to amplify the themes and issues explored in each performance.

“When I left university, I just wanted to keep on writing and performing and collaborating,” says Joe. “I think that in the UK, we’ve got this long history of making theatre, so much that it’s a part of our cultural identity and has nurtured so many storytellers.”

When we last saw Joe, it was as an audience member at his performance of Labels at both the Vault Festival 2017 and the M1 Singapore Fringe Festival. Today, we sit with him in a cafe as an interviewer, as we talk to him to find out more about his brand new work in progress Fanboy, along with the reruns of his previous productions Labels and Monsters (all playing at the Vault Festival 2020 in London next February, and the Wardrobe Theatre in Bristol next January). With the critical acclaim that Labels achieved, Joe has remained down-to-earth as an artist, appreciative for the accolades but always looking forward to the next project. “It’s certainly opened up opportunities to see the world a lot more, but when a project finishes, you end up becoming another unemployed artist back to the drawing board again!” Joe says. 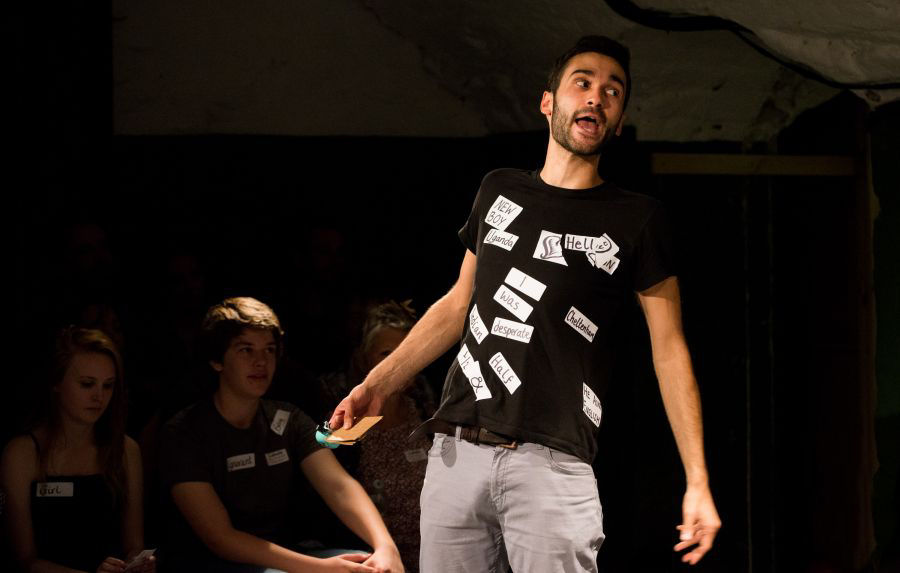 “It certainly feels amazing to win things, but part of that is because you put in so much work and make so many sacrifices, with your team cobbling funding together and still scraping together enough to pay rent,” he continues. “Recognition feels great, because it means that you’ve found an audience and people who understand your work, when a lot of the time art making can be relentless, precarious and insecure because you really don’t know what’s gonna happen to you next.” 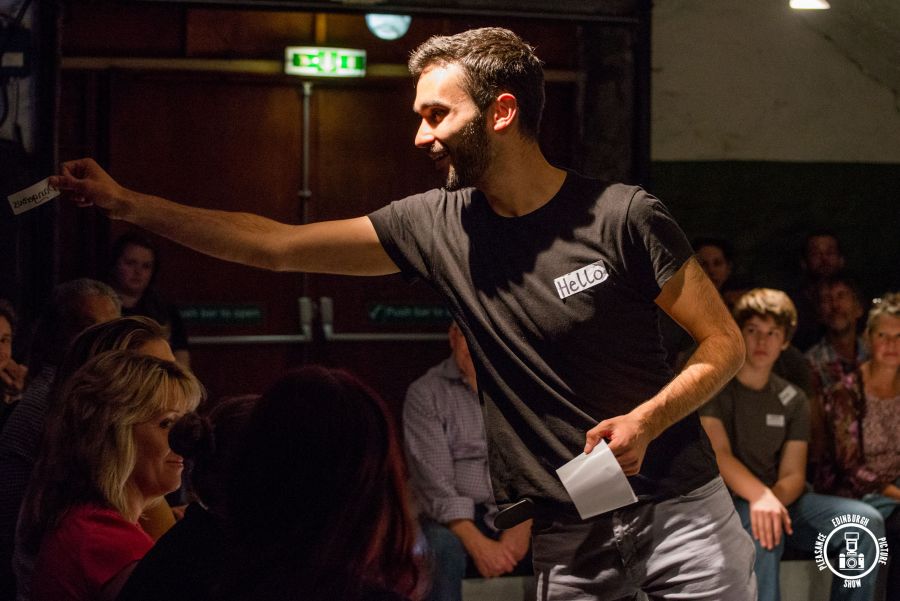 If it’s anything to go by, one-man-show Labels is a work that confirmed Joe’s talent as a theatre maker, using the whimsical prop of sticky labels to talk about, well, labels, at least, the kind that one is stuck with as a non-white person growing up in Devon in the ’90s. But rather than relying on the sticky labels alone as a gimmick, Joe manages to elevate those ideas beyond his personal story, bringing in issues of politics, the global refugee crisis, along with even a little comedy thrown in for good measure. “Labels was a very personal show for me, but at the same time, it’s this universal story of mixed heritage,” Joe explains. “We have people who come from all over the world, and racial prejudice is something that continues on to this day.” 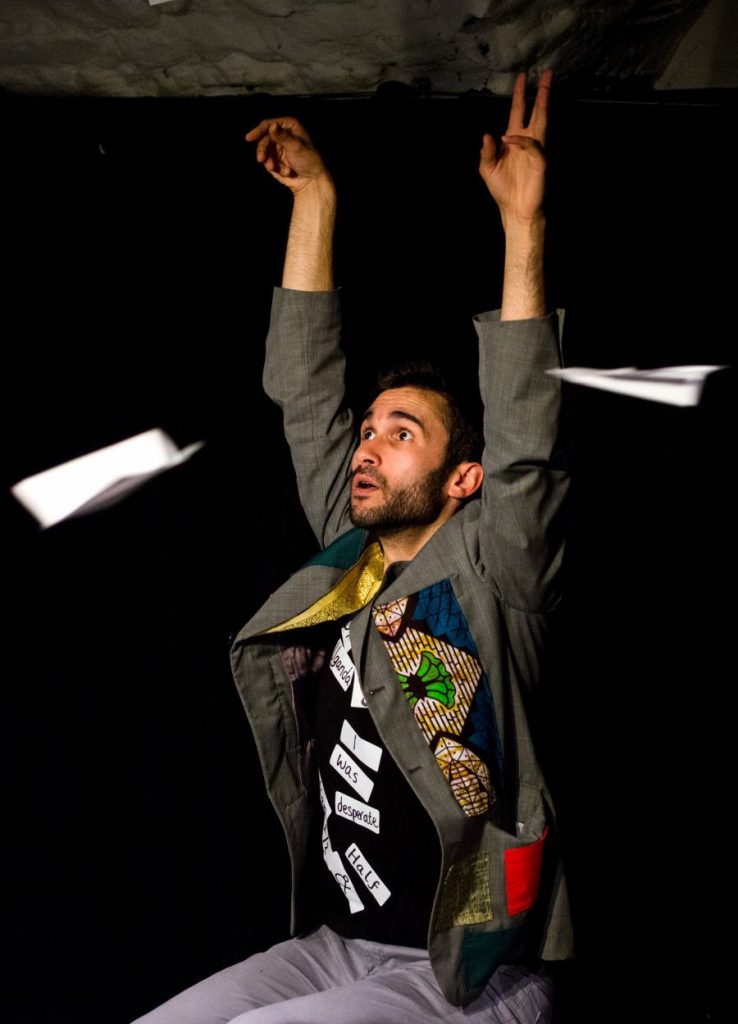 Because it is such a personal piece, Labels might prove a difficult play for anyone else to perform. On the longevity of the play and the possible of restagings elsewhere without hm performing, Joe says: “While the specifics of the story are unique to me, but if someone were to ever restage it without me, then that someone might be able to tweak it to fit their story better. What was so intriguing perhaps, was how a lot of the show was comparing how racism has changed from my dad’s generation to mine, and how it continues to change. That’s a perspective that’s unique to this story.” 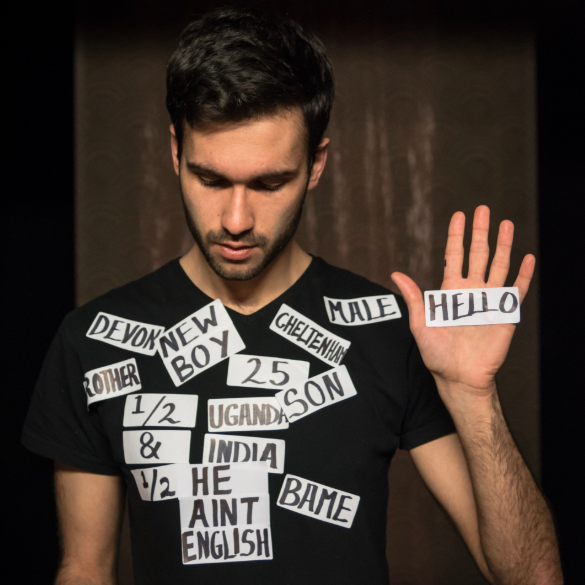 On the other hand, the follow-up to Labels, Monster, takes on a rather different topic from racism and prejudice, tackling instead the far more wide-ranging issue of masculinity. Winning the Vault Festival Show of the Week 2018, Monster deals with toxic masculinity, the male figures in pop culture and media, and the problematic expectations lumped upon young boys and men growing up as a result. “It’s definitely quite a different show from Labels, and it’s a lot darker and a lot more questioning with regards to what it means to be a man,” says Joe. “We internalise so much of the role models we see in mass media, and it affects the way we perform masculinity in public and private. Essentially, I’m trying to take audiences on a journey of someone who isn’t actually violent, and is just worried about the circumstances surrounding him, and what he could become.” 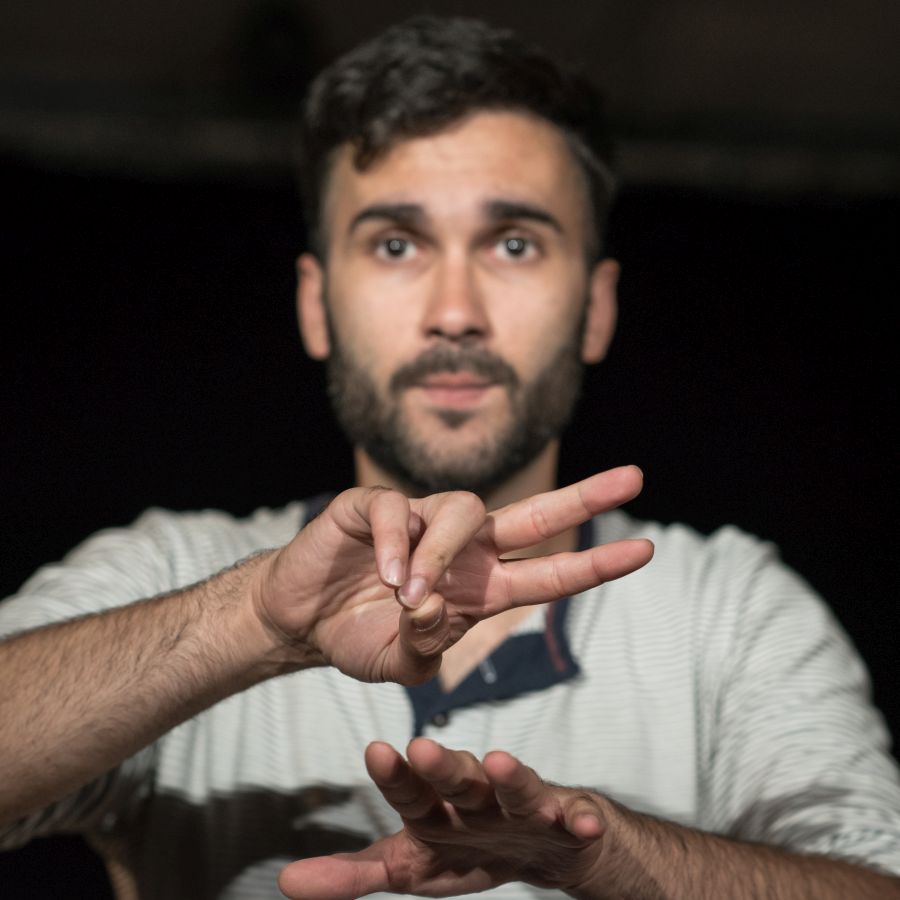 Besides featuring prominent sportsmen such as Mike Tyson, Monster will also include references to Sir Patrick Stewart and even William Shakespeare. How do all of these come together to talk about masculinity? “There was this article about Patrick Stewart and the legacy of domestic violence,” Joe explains, “and it talked about how when he was a child, his dad used to beat his mum. These days, he’s a patron of Refuge, and does a lot of work related to domestic violence and helping women who were victims, and wants to have more conversations with men about changing that behaviour. And a large part of that is about facing his own feelings about it. There’s a lot of honesty, and what speaks to me is the realisation that there’s so much fear and shame that stops us from having these conversations at all.” 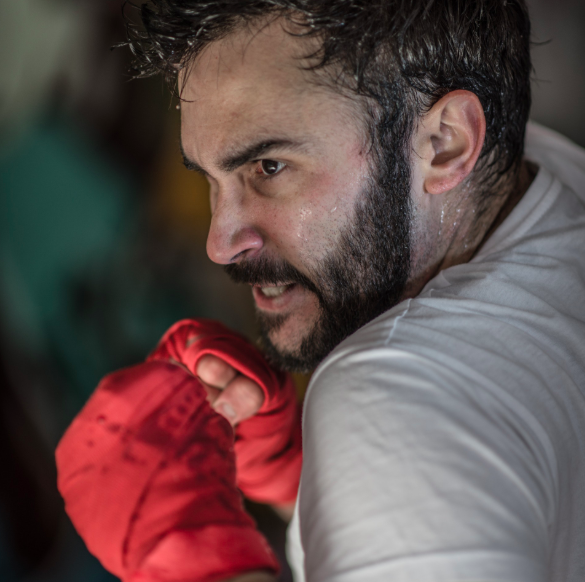 “Mike Tyson on the other hand, is famous for being a professional ‘warrior” and literally fights for a living,” Joe adds. “His persona is so mixed; he’s this sweet, understated guy with a lisp, but when he’s in the ring, he can fly into a rage. He was convicted of rape and sent to prison, and to this day still denies he did it. I use a lot of text that’s out there, public text from politician speeches to film scripts and draw from pop culture to make this a collage that says something about how certain figures surround and influence us, and how men change their attitudes and behaviours towards the way they take it.” 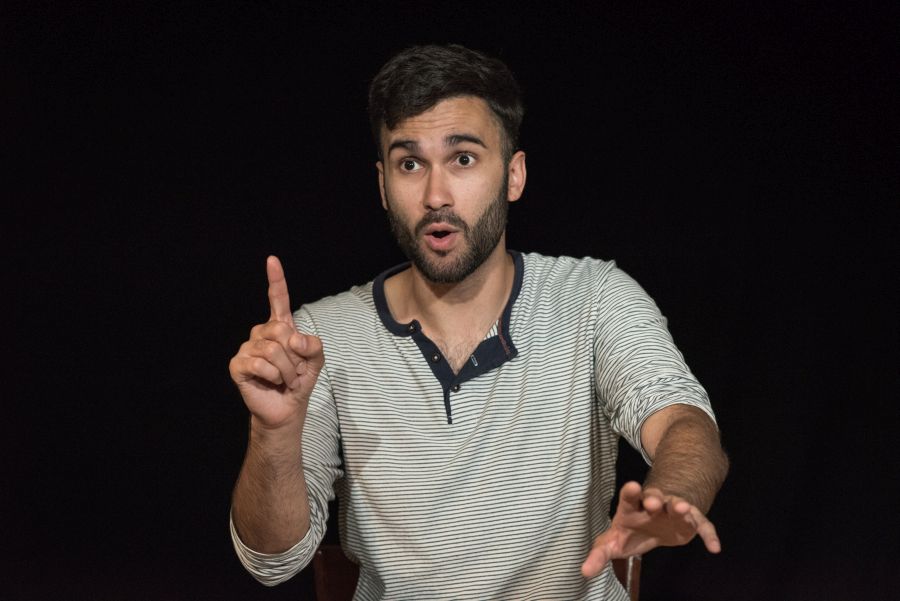 As for his newest work, Fanboy, Joe turns back to his great love for superheroes and Star Wars. But while it may seem to be an exploration of fandoms, Joe manages to subvert expectations once again and segue from that into far bigger issues, from fandom of political figures, to fear of climate change. “Fanboy is very much about what nostalgia is doing to us in the present,” he explains. “It’s something people are cashing in on, with films and TV and games working it in. I think the reason for that is how it’s so closely associated with childhood, and how we like to hide in these memories because the real world is such a strange and scary place, and we feel safer with these instead. Pop culture is popular for a reason: it deals with concepts of shared worlds, and people all over the world can exist in the same fanbase despite never even having met, and share that sense of community.”

“That then leads back to issues of masculinity, where we can see how mostly male fans occupy these fandoms,” he continues, “and end up becoming overprotective of certain franchises they love and become bullies using sexually violent language against others on the Internet. I’m interested as to why that happens, and how that is also related to political fandoms, such as Trump and Boris Johnson, and the protectionism that occurs around them as well. A lot of my thinking then leads back to having to grow up and learning to face things that are difficult and scary.” 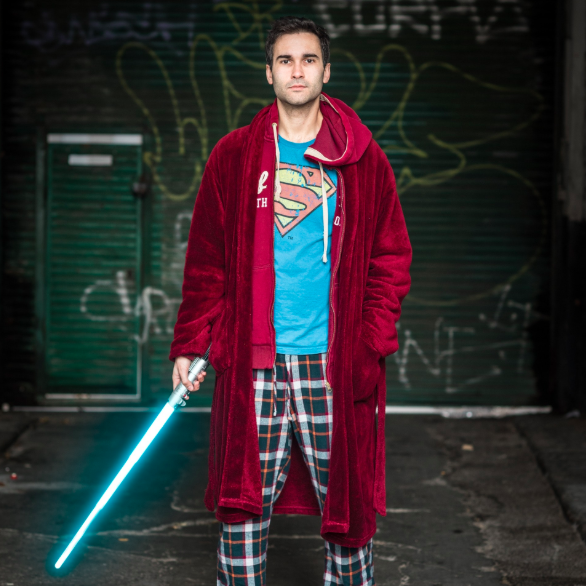 As a work in progress, Fanboy is still an incomplete piece, and Joe intends to use the opportunity to present the show in both Bristol and the Vault Festival to test audiences as a means of improving it, preparing it for full reviews and a run at the Edinburgh Festival 2020. “It’s honestly a real privilege to be doing what I’m doing,” Joe says. “Maybe one day, I’d love to go into screenwriting for television and film, and still balance that with doing theatre and perform every so often. Essentially it all boils down to telling stories doesn’t it, and telling them in new mediums?”

And as someone who’s been in the theatre making game for some time, Joe has this piece for advice for young artists out there: “Make work you believe in, tell stories you believe in, and find people who share the same enthusiasm, work ethic and vision that you do. Be sure to balance expectations, and always hope for the best but prepare for the worst. But most of all, learn to enjoy the process and take things as they come, celebrating the good and using it as motivation to keep going, making sure to look after yourself, not to burn out, and find the next exciting story to tell the world.”

Fanboy (Work In Progress) plays at the Vault Festival from 4th to 9th February 2020, while Labels and Monster both play on 8th February. Tickets and more information available here