★★★☆☆ (Performance attended 31/1/20)
Allegorical tale of a dystopian surveillance state preaches the value of the arts, but loses itself in a myriad of subplots along the way.

During the rule of the Three Kingdoms, the seven sages of the bamboo grove were a group of scholars and artists who chose to counter the bureaucracies and corruption of the time in the only way they knew how – with music, poetry and hope. And in a world that seems to be descending into chaos once again, it seems that more than ever, we could do with a little bit of that to get by.

Commissioned by the Esplanade, Toy Factory opens the 2020 Huayi – Chinese Festival of the Arts with 7 Sages of the Bamboo Grove, a reimagination of the historical sages set in a technologically-advanced, dystopian society. Directed by Goh Boon Teck, and co-written by Goh and Koh Teng Liang, the production attempts to chart the many stories told of the sages as they found themselves suppressed by the authorities.

In Toy Factory’s version, the world the seven sages reside in is ruled by an iron-fisted organisation known as Yan Ce, led by Cao Shuang. With the help of her lackeys and henchmen, Cao Shuang intends to maintain peace across the country by forcing its citizens to don a special headset, allowing complete control over their thinking. One thinks of how in the real world, we’re already so addicted to our own devices, that this could even be a real possibility sometime in the future. 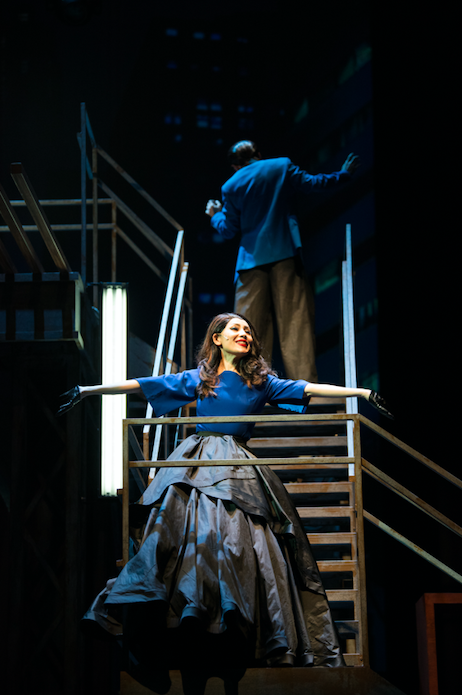 When the show begins, the set (designed by Goh Boon Teck) is split into two ‘worlds’ – the towering, threatening headquarters of Yan Ce above, and the secret hideout of the sages below, as well as the prison cells of Yan Ce. The cast scrambles onstage, almost as if they’re trying to find their footing as ominous music plays, and sets the tone for a thriller of a show, with all the right ingredients for its success.

We are introduced to Cao Shuang (Sharon Au) and composer Ruan Ji (Nelson Chia), arch-nemeses with a history of opposing each other. Cao Shuang’s authority is quickly established as her cronies report back to her, always at her beck and call (Ryan Ang and Deonn Yang, making a strong impression in spite of their short time onstage). The extent of the oppression is made clearer still as members of the organisation stomp their feet loudly in unison, calling for attention. We think of the strict rules and order of military governments, as images on the screen depict scenes of war. Cao Shuang warns her citizens not to take their safety for granted, and there is a clear division in power between the organisation members on the stairs, and the plebeians standing below. A plebeian, attempts to rebel by taking off his headset, only to be killed instantly by the organisation to showcase just how ruthless and all-oppressive they are against any kind of rebellion.

In the face of such oppression, it’s clear that there is a spectrum of views and approaches adopted by each character. Arts patron Shan Tao (Timothy Wan), for example, simply wants to keep a low profile and keep out of trouble, while his son Wang Rong (Sugie Phua) takes risks by actively works against the organisation in the hopes of somehow changing the world. On the other hand, we also see sculptor Wu Shuang Ke (Ric Liu) and his friend Wu Chang Ren (Qiu Yue), have given up all hope after years of rebelling against the system, with no visible progress made. Even within Yan Ce’s ranks, married couple and high-ranking officials Zhang Chun Hua (Liew Li Ting) and Ma Si Yi (Alvin Chiam) express their exasperation with the system, with nowhere to go. Yan Ce member Ying Yue (Ching Shu Yi) is so low on the ranking, that she grasps for any amount of recognition and appreciation she can get at, a common phenomenon even in the real world for employees of big corporations. 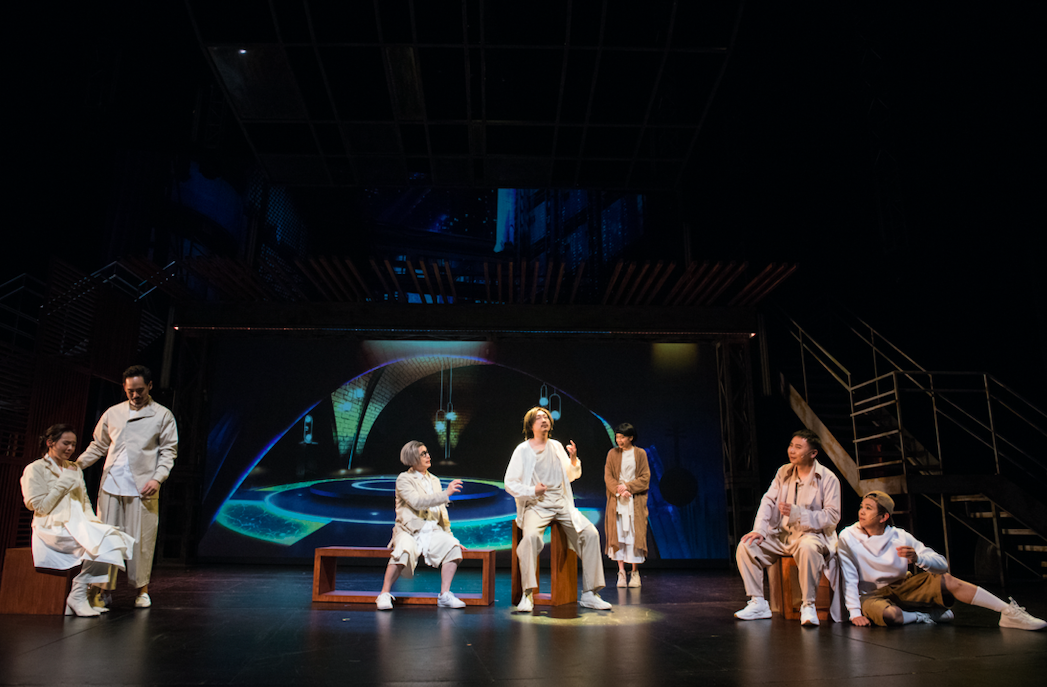 Hope for change then, comes in the form of the weekly meetings by the group of renegade artists who choose to continue their work, against the organisation’s wishes. Shan Tao, his wife and photographer Han Shi (Liew Jia Yi), Wang Rong (Sugie Phua), poet Xiang Xiu (Jodie Chan) and fine artist Liu Ling (Li Te) meet in their secret spot every week, a sanctuary for them away from the oppression of those above. Ruan Ji, musician Ji Kang (Tang Shao Wei), and Ruan Ji’s violinist nephew Ruan Xian (Loh Jun Hong) join them soon after, and overjoyed at their new comrades, the artists begin to rediscover happiness again. Ji Kang plays a song on a special ruan, the sages pass around a precious bottle of 5 Minerals Wine, and the group becomes almost delirious with joy.

But just as it seems the sages have found a way to escape the horrors of their real lives, that hope is quickly snuffed out as their hideout is discovered, and they are captured and imprisoned by the organisation. Save for Shan Tao’s family who are left unscathed (and suspected of betrayal), the remaining members are eliminated one by one, until only Ruan Xian is left. Cao Shuang releases him as a message to the rest of the country not to underestimate the organisation, and the sages are left crushed. 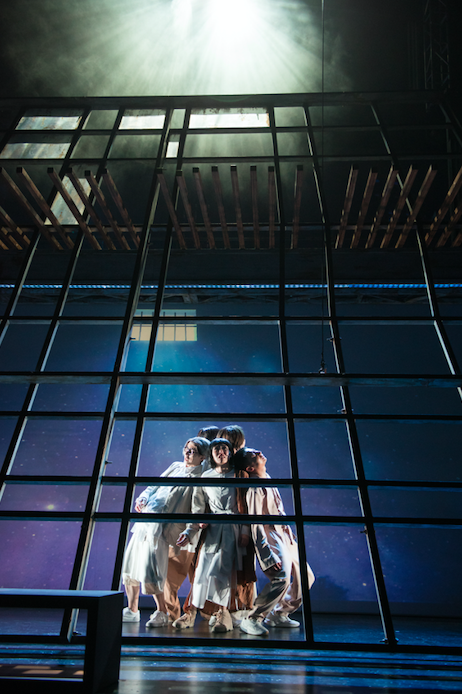 Loh Jun Hong, as Ruan Xian, picks up his violin, and begins to play the poignant Guang Ling San composition, allowing Jun Hong to show off his capabilities as a good violinist and delivering a touch of class to the performance. As he plays, the other characters begin to return to the stage one by one, as if the song is stirring the country’s collective memory and they remember all these people who fought bravely and stood up for what they believed in. Easily the most uplifting and powerful scene, as the sheer number of characters arrive behind Ruan Xian, one thinks about how know that no matter how many times the authorities beat them down, as long as the music plays on, there is hope, and the people will rise another day to fight.

As much as it is an ambitious idea and an appropriate allegorical tale for our turbulent times, 7 Sages of the Bamboo Grove misses out on the important world-building details in its attempt to cover far too much. In trying to touch on so much of the seven sages’ stories, the simple plot is stretched to its limits, and the production’s pacing drags as a result. This also dilutes the development of the characters onstage, many of whom are token at best. The play is thus further weighed down by a cast that’s far too big for such a story. Glaringly, the production also features a dearth of props, be it the ‘wine’ that the sages drink, or even the special ‘ruan’ Ji Kang plays (leaving him to air guitar). By the time we reach the final scene, the world-building remains paper-thin and feeling distinctly immaterial, so much that even when Ruan Xian actually plays his violin in the finale, we begin to doubt if he really is playing, or simply miming it. 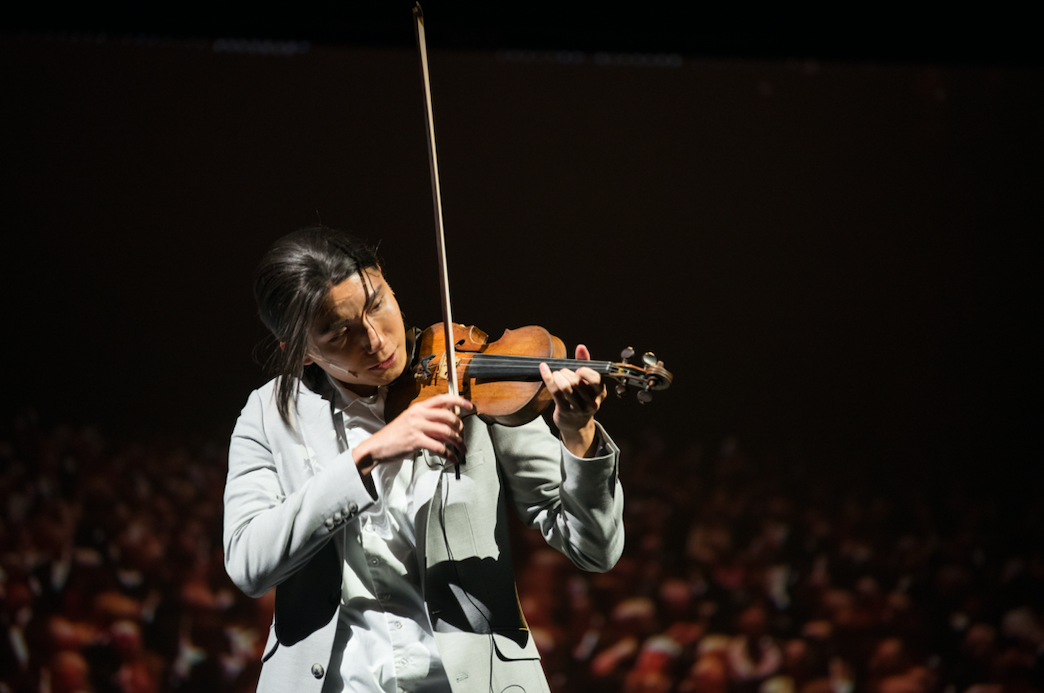 Certainly, 7 Sages is buoyed by select standout performances, such as the good chemistry between Nelson Chia and Tang Shao Wei, or Li Te and Jodie Chan going all out, but ultimately lacks enough cohesiveness and connective threads for audience members to appreciate it in its entirety. As the opening show for this year’s Huayi – Chinese Festival of the Arts, it’s appropriate and innovative of Toy Factory to be using theatre as a medium to explore timely issues such as censorship, oppression and authoritarianism. But in terms of its execution, 7 Sages of the Bamboo Grove ends up feeling like a beautiful dream of an idea that ends up feeling half-realised onstage.

Photos by Jack Yam, courtesy of Esplanade – Theatres on the Bay