In the field of conspiracy theory, so long as a claim cannot be disproven, the possibility of it being true exists, allowing the idea of multiple relative ‘truths’ to exist simultaneously without conforming to an absolute. Perhaps one of the earliest versions of this comes in the form of the Schrödinger’s Cat thought experiment, suggesting that without sufficient evidence, more than a single reality can be in place at any one point in time, giving rise to concepts such as string theory and parallel universes. 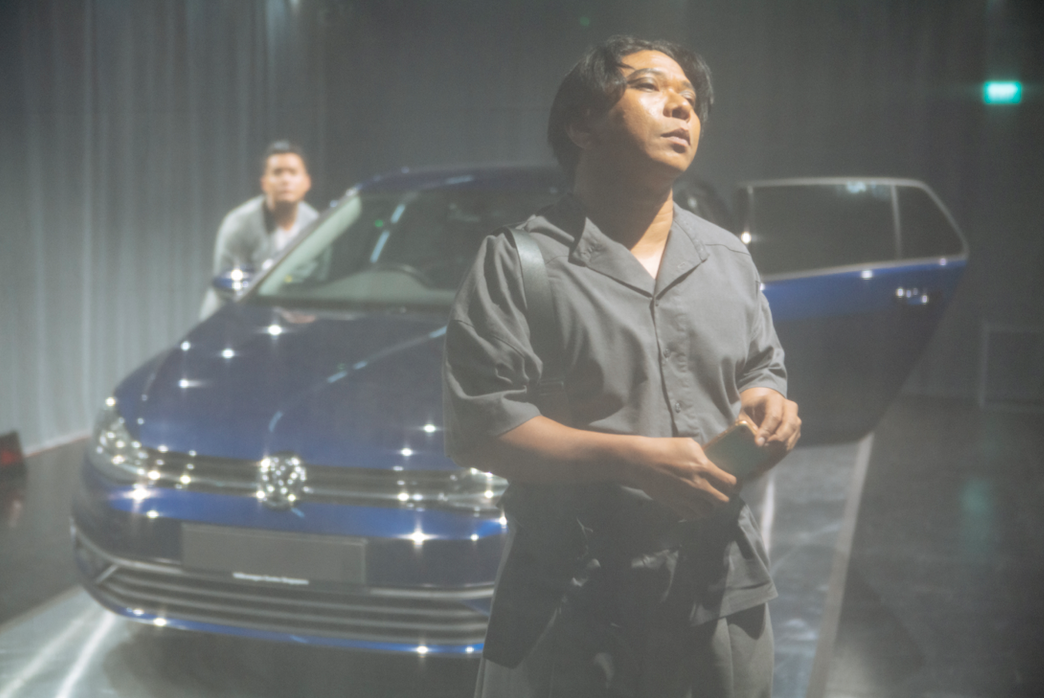 Inspired by Akira Kurosawa’s classic film Rashomon and how it raises the idea of multiple truths from a string of unreliable narrators, Ground Z-0 attempts to put the truth itself on trial in their newest work Prism of Truth. Directed by Zelda Tatiana Ng and co-written by Ng and A Yagnya, over the course of the evening, audience members are tasked to act as the jury in a court of law, tasked to discern the truth behind the murder of a police officer (Rizman Putra). 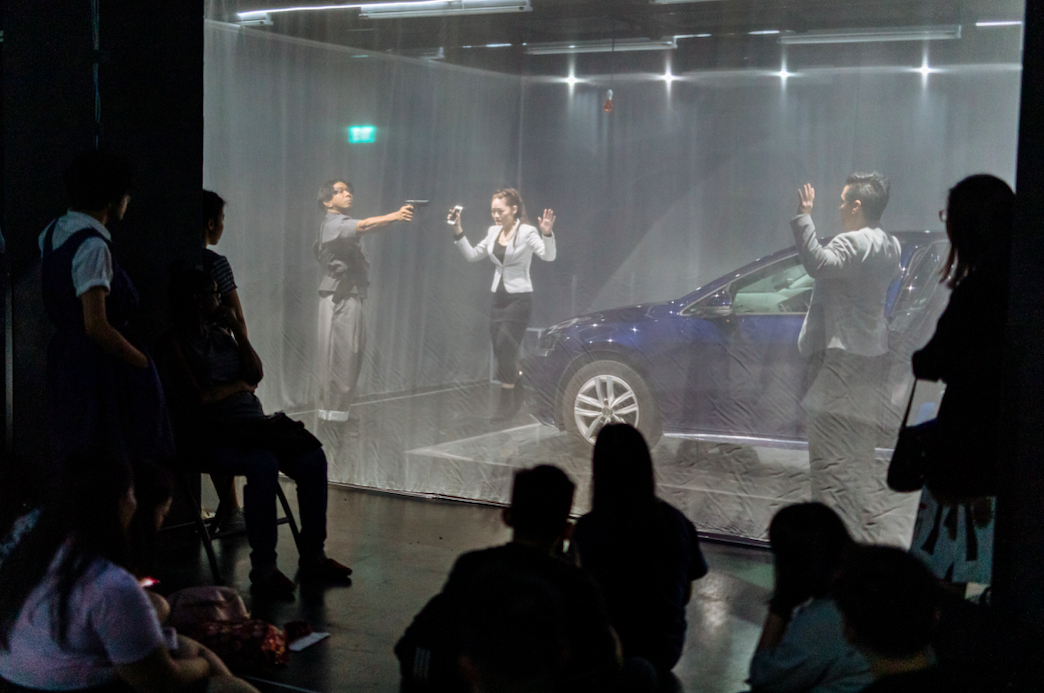 Suspicions fall on to the officer’s wife (Lina Yu) and the CEO of a tech company (Nicholas Bloodworth), both of whom were last seen with him on the night of the murder and who have since disappeared without a trace. The play posits three possible scenarios which could have taken place, as re-enacted by the actors behind a gauzy wall, almost as if symbolising the fuzzy nature of the ‘truth’. 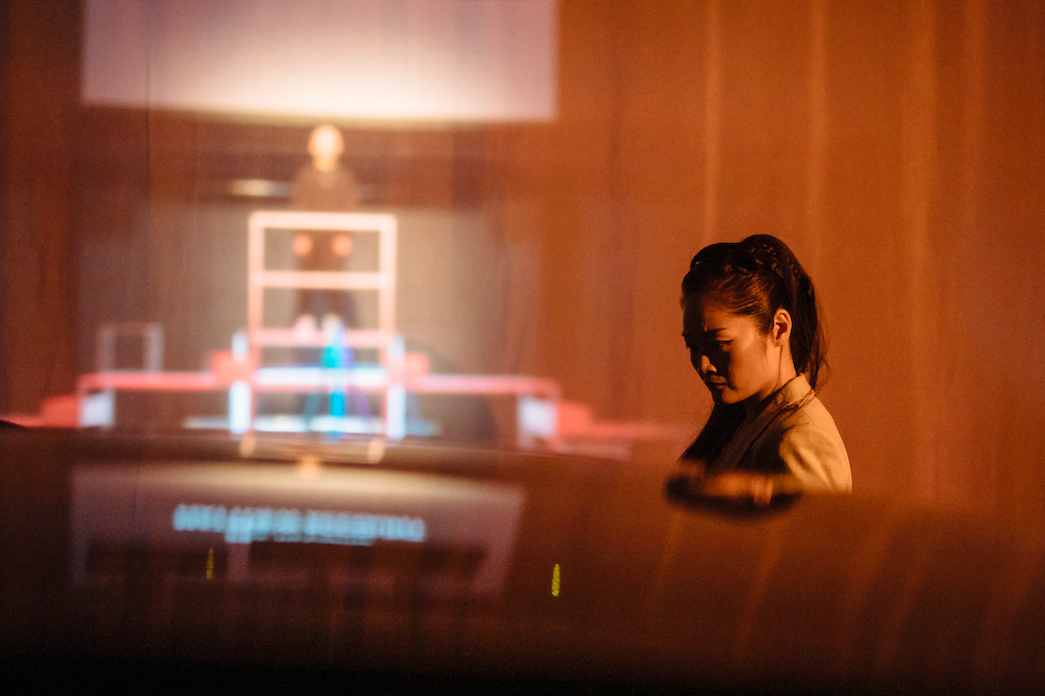 Over the performance, we meet three witnesses each providing their own inconsistent testimonies – a security guard (Julius Foo), a driver (Doreen Toh) and a religious servant (Darren Guo). We are also presented with video footage of various acquaintances of the subjects and eyewitnesses, providing character references and further background information to either cast suspicion or bolster claims. For any mystery lover, Prism of Truth’s set-up is vague but interesting enough that it keeps us guessing, and littered with enough clues and ‘evidence’ that we are eventually likely able to form our own conclusions. 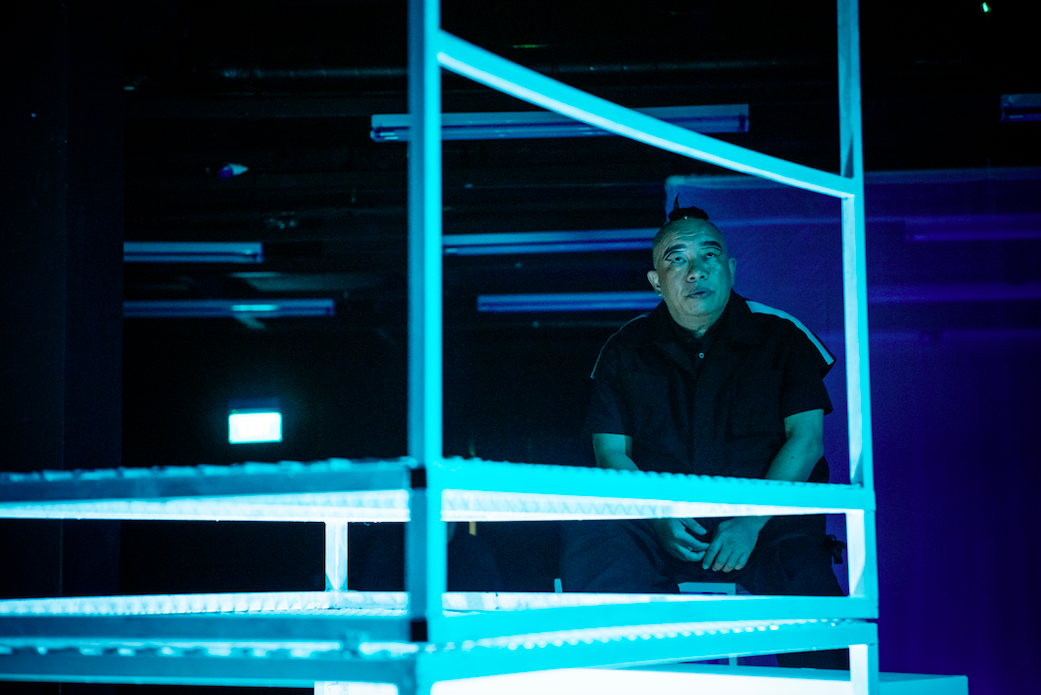 To add a little modern touch and interactivity to the performance, audience members may also receive help in the form of a Facebook group, which we are invited to join prior to the show beginning. The group, moderated by an entity named Val K, becomes a secondary source of information, with new hints and ‘evidence’ collated from the characters’ social media feeds. While it is completely possible to experience the show without referring to the group, audience members are strongly encouraged to actively participate in online discussion throughout the performance. There are times one could even see the performance as a kind of live theatre ‘watch party’, where audience members comment in real time as new evidence is uncovered or pressing questions need to be answered. 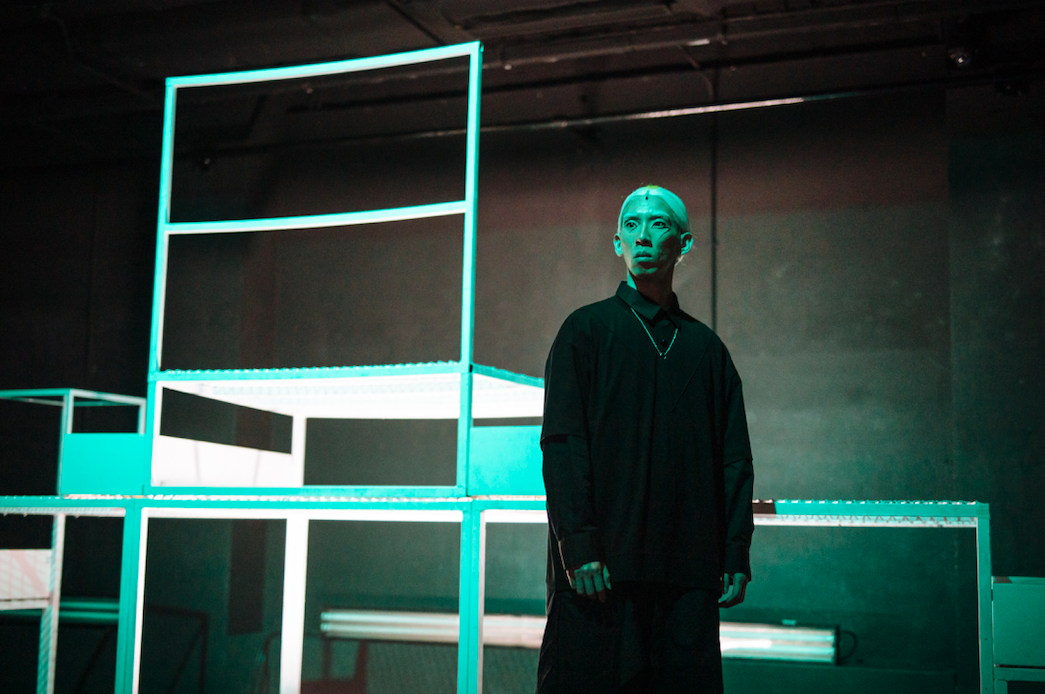 Going a little deeper, one might even think of the Facebook group itself as an alternative reality that may or may not be true. While the opportunity to immerse in the digital world may at times distract from the live experience, one also notes that having such a platform helps provide an additional layer of intrigue we can consider that can help or hinder the investigation. In a world where misconceptions and fake news runs rife, having access to such a questionable resource helps further complicate the matter of the truth, emphasising the ease with which we trust what we read online and unable to differentiate what is real or what is not. 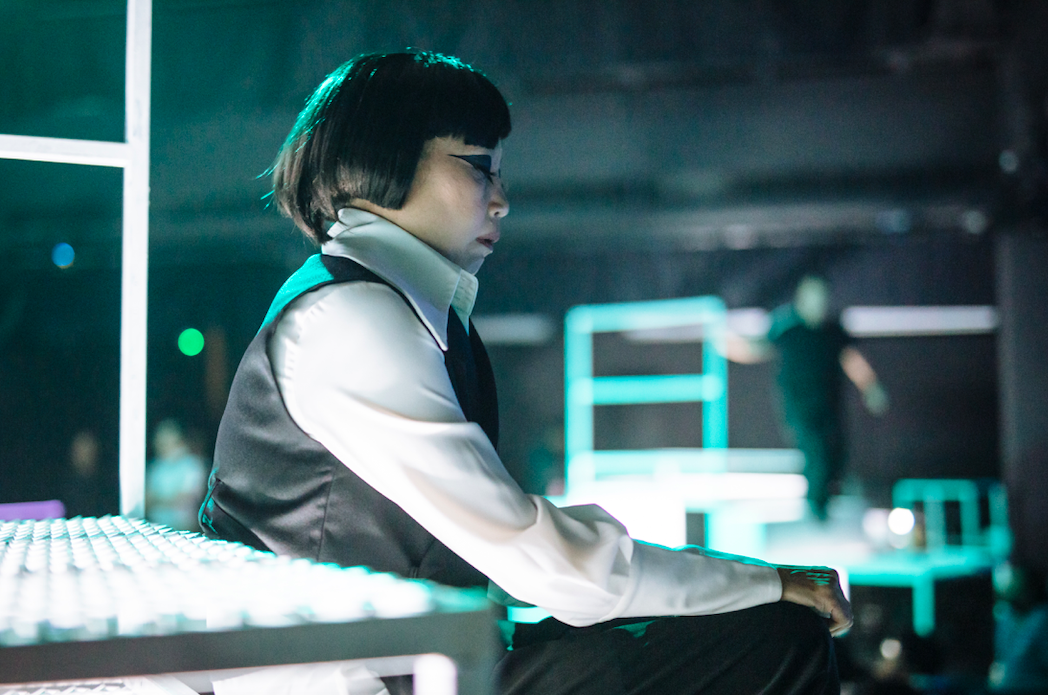 Certainly, while Prism of Truth makes for an interesting and rather innovative social experiment, it also comes with its fair share of issues as an experience. Being a multilingual performance (in English, Mandarin and dialect) with no surtitles, audience members unfamiliar with certain languages completely miss out on some of the testimonies delivered by the witnesses. This might not be a problem in some other productions, but in Prism of Truth, the testimonies form the bulk of the experience, and are integral to getting a good understanding of the situation. While the team attempts to remedy this with a very simplified translation on the Facebook group, there are many subtle nuances that are lost in translation, and hinder us from properly interpreting the tone and believability of each witness. 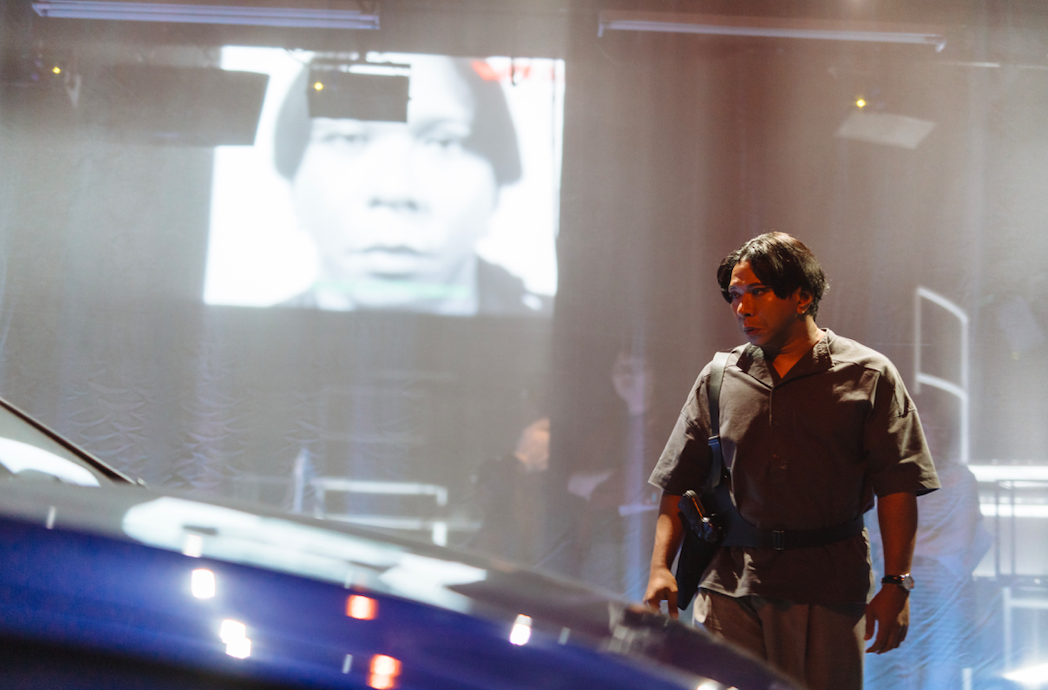 One also feels that the characters, while they serve their practical purpose and roles, remain one-dimensional even by the end of the performance. Each character is defined almost solely by their actions during the night of the crime, and even with the character backgrounds provided, do little to endear us to them or allow us to care about their eventual fate. To us, the characters remain strangers and pieces in a logic puzzle for us to solve. In lacking an emotional grip, the final outcome and guilty verdict loses impact, and our decision as a jury feels like an empty, weightless decision. 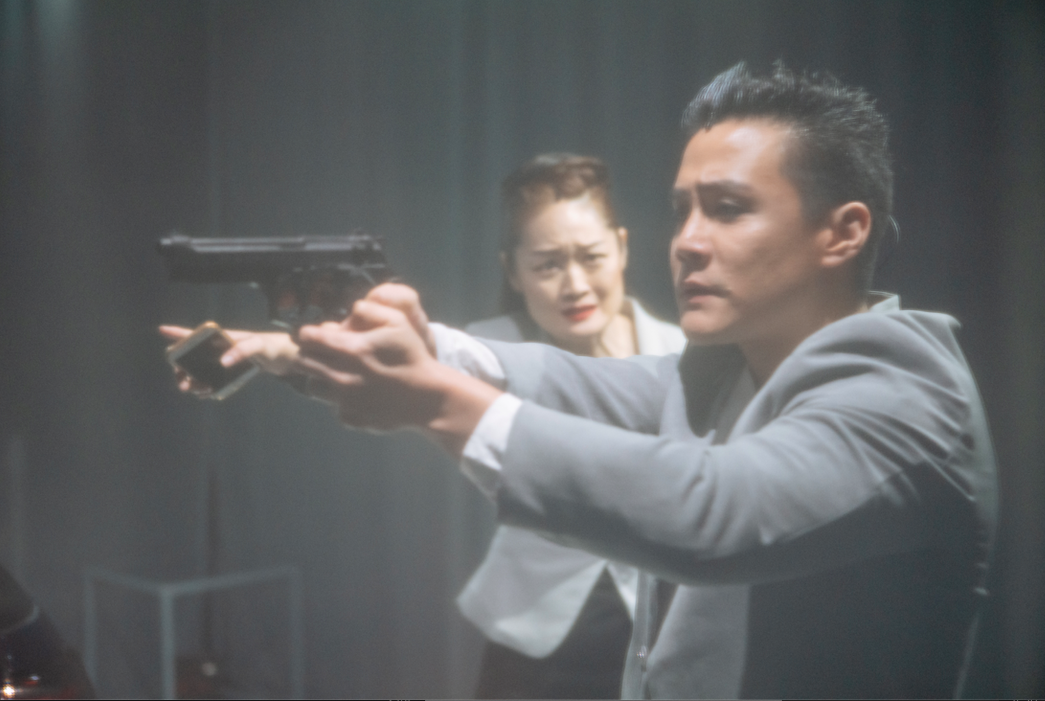 Part thought experiment and part social experiment, much like its title suggests, Prism of Truth then posits that there is no one absolute truth, but a spectrum of relative ones, all of which are equally valid. By the end of the play, whichever ‘truth’ we vote on as the final outcome really doesn’t matter, so long as we are able to live with our decision and tell ourselves we are ‘right’. The beauty of the piece then, lies in how it uses its form to make us doubt and question our own decision-making process, allowing us to reflect on just how much trust we can put in information we are fed on a daily basis. 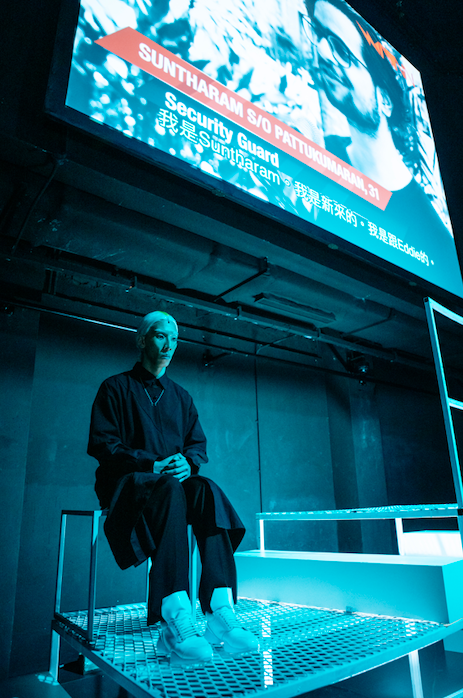 Photos by Crispian Chan, courtesy of Esplanade – Theatres on the Bay

Prism of Truth plays from 31st January to 5th February 2020 at the Esplanade Annexe Studio as part of Huayi Festival 2020. Tickets are SOLD OUT.