While most of the narrative heavy-lifting in biopics is often done via text, for a show about a dancer’s life, it makes perfect sense that the story is told not by words, but by her body instead.

First performed in Hong Kong in 2019, City Contemporary Dance Company’s Almost 55 is a full-length autobiographical solo work performed by and charting the life of dancer Qiao Yang. Choreographed by Taiwanese choreographer Chou Shu-yi, the work sees Qiao Yang reflecting on her ageing body and her place in the dance world as she performs challenging solos while recalling key moments in her dance career.

Having danced for almost the entirety of her life, for the 55-year old Qiao Yang, the very act of still dancing despite her ageing body seems to be an almost defiant act against time. She proves this right from the very beginning of the performance, as Qiao Yang enters the space and an extensive series of stretches, showing off her body’s incredible flexibility.

As the lights dim, the show then traces Qiao Yang’s journey over the years as a dancer. These are represented by both choreography and spoken word, as she moves to perform solos such as the original Shaanxi dance choreography from her childhood, and speaks about her move from place to place. For Qiao Yang, much of her early life is defined by travel; in her recounts, she mentions a forty hour train ride as she went from north to south, about to begin a new life in a new city.

As a Shaanxi native who travels to Beijing in the hopes of clinching a potentially life-changing audition, to Guangzhou to expand her dance vocabulary, and finally, Hong Kong to settle for the past 24 years of her life, Qiao Yang’s identity as a dancer and a Chinese woman is in flux. When she first speaks, she introduces herself several times, in Cantonese and in Mandarin, and questions both us and herself about where her home truly lies. At one point she begins to wonder out loud where it is she belongs, imagining a utopian landscape just for her. Her dance seems to reflect and emphasise this search for this promised land, where she performs a range of choreographies over the course of the performance, as if trying all ways and means to find a style or genre she is comfortable with.

Not only does this showcase the dexterity she still possesses at her age, but it also suggests her shifting sense of self, with the versatility of her movements. One sees Qiao Yang as a figure unwilling to conform to any specific style or be locked into any societal expectations, going against the grain to become a true individual. Through her movements, we are able to see her journey and growth as a dancer, emerging, evolving and eventually becoming the person she is today, her experiences and memories encapsulated in her grace and agility, more surefooted and less exploratory as the performance goes on.

What enhances the work so much is the set and lighting by Lee Chi-Wai. Key to this are the curtains behind Qiao Yang, billowing ever so slightly and acting as a screen for projections, such as a video of audience members in chairs watching her as she prepares for a performance. When Qiao Yang speaks, the screen also displays a close up projection of her face, allowing us to see her expressions and feel her sincerity more clearly. Most significant however, is a curved rod that rotates overhead, with a light attached to the end, adding certain effects that add a different dimension and meaning in each solo she performs.

Both these set-pieces work in tandem to elevate the work to something of a performance-installation piece. Early on, dressed in grey pants and a top (complete with a grey swimming cap-like extension over her head, as designed by Lin Ching-ju), Qiao Yang bends, writhes and slides across the floor, as if she were some kind of embryonic, prehistoric creature. The light above her rotates slowly, casting the occasional spotlight onto her as it circles the stage. Behind, we see a shadow far larger than her actual body on the screen, as if suggesting that her potential contained within her body is far greater than appearances seem.

Towards the end of the performance, Qiao Yang seats herself in a chair, and we listen to her recall some of her most significant years and her achievements then. But she suddenly mentions her accomplishments at age 60, and we realise that this is a woman that has gone beyond what age can throw at her, unwilling to be restrained by these supposed restrictions on her body. She gets up to dance, and as she does, we see a shadow cast on the ground by the rotating rod, resembling the hand of a clock rapidly spinning. A strobe light is cast on her, and her movements appear hyper-realistic and slowed down, as if time itself were grinding to a halt while she dances on. So long as she can keep dancing, time itself seems to have no effect on her, remaining strong, beautiful and confident till the end of time if she can help it. 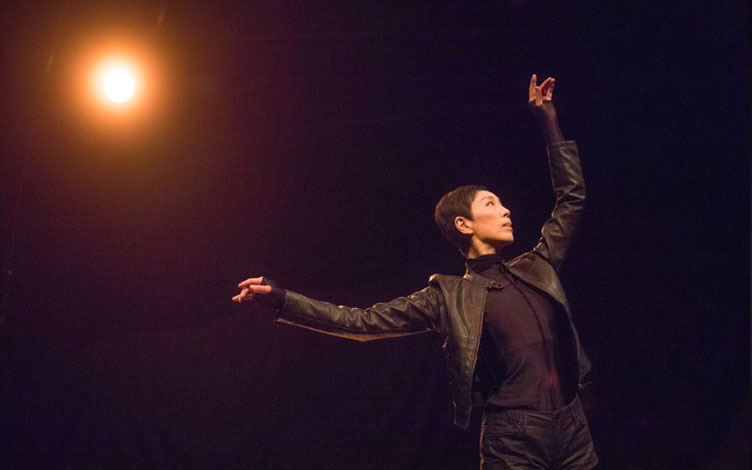 Almost 55 played from 7th to 9th February 2020 at the Esplanade Theatre Studio as part of Huayi Festival 2020.

The 2020 Huayi – Chinese Festival of the Arts played from 31st January to 9th February 2020. For the full list of programmes and tickets, visit the Esplanade website here