★★★☆☆ (Performance attended 15/2/20)
‘Adult-oriented’ show about a friendship between pets stuck at crossroads between crass humour and an attempt at genuine emotion.

Remember waking up on weekends as a kid, switching on the TV and catching those Saturday morning cartoons? Patch and Punnet’s Fika & Fishy is a little like that, complete with its own opening song in the form of a rap by omarKENOBI (of local band Mediocre Haircut Crew). Except absolutely not meant for kids.

Much like their production Stupid Cupid (2018), Fika & Fishy is staged in a cosy space above a shophouse, and Patch and Punnet have decked it out to feel homey and comfortable. Directed by Krish Natarajan, at its heart, Fika & Fishy holds a solid story about an unlikely friendship that has the potential to leave audience members affected and moved. Actors Ong Yi Xuan and Sharmaine Goh commit entirely to their performances as perky puppy Fika and dour goldfish Fishy respectively, each one dressed in their respective animal costumes. Irsyad Dawood’s set makes use of the odd space, with a square hole in the wall acting as a window for Fishy’s fishbowl, while Fika lives out on the lawn, represented by artificial turf and a cardboard ‘doghouse’. 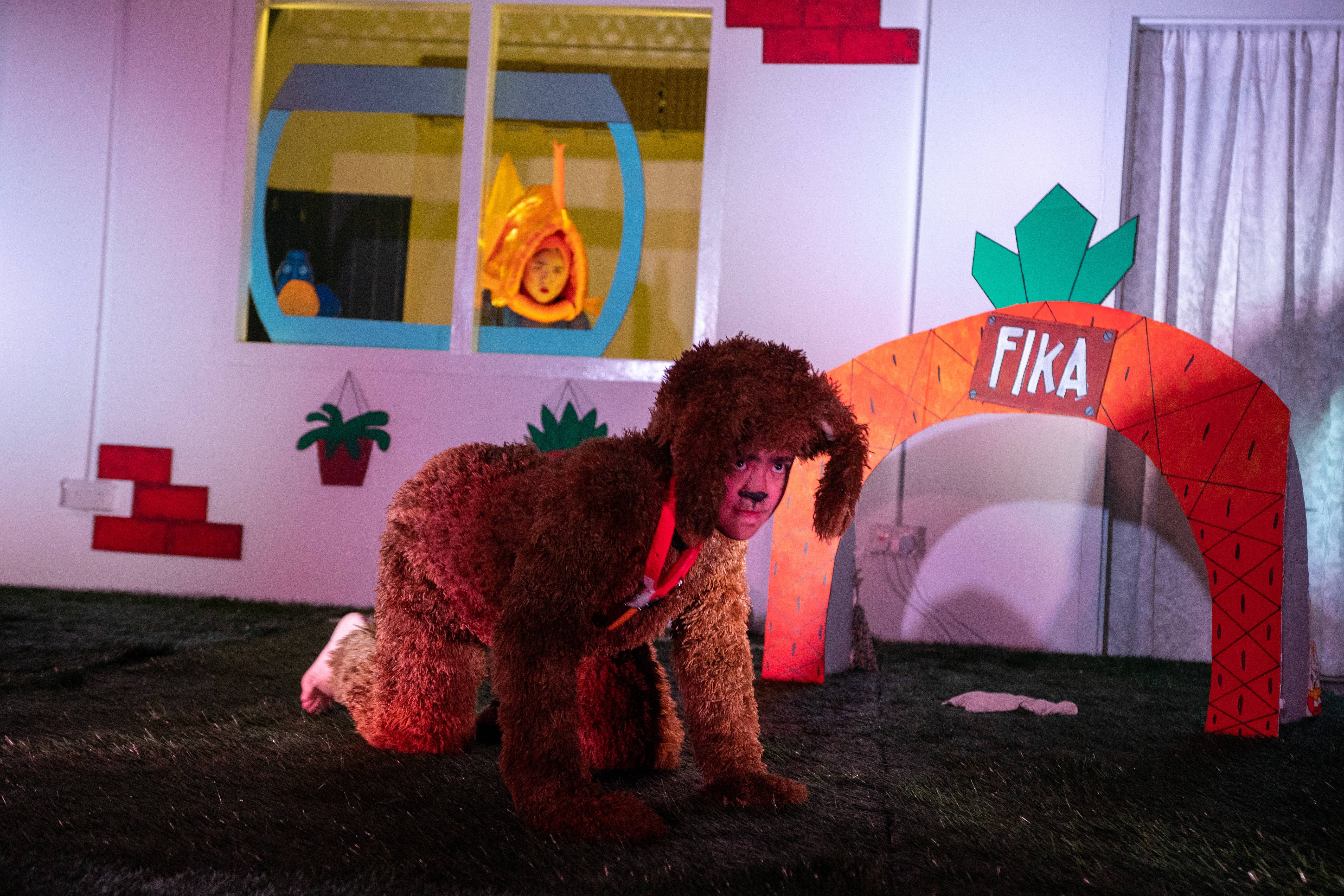 Even with the space’s limitations, the team has a managed a simple lighting set-up (designed by Ian Pereira), brought on board a live band (Bennett Bay on guitar/flute, Winston Koh on keys and Samuel Choon on violin), and even provide cushioned floor seating, carpets and couches to create a living room-like atmosphere. There’s even a makeshift theatre bar with Fika & Fishy themed cocktails, a clever way to welcome audience members to the show with a distinctly salty, gin-based ‘The Fishy’ (complete with an orange slice to represent the goldfish) and the milo-flavoured vodka-Bailey’s base ‘Fika’ (with coloured sprinkles and a rim of Nutella to represent the innocent, sweet-natured puppy). All of this comes together to create an endearing guerrilla theatre aesthetic.

Patch and Punnet knows their target audience well and enlists the use of pop culture references to enhance scenes, such as using the familiar melody of Randy Newman’s ‘You’ve Got A Friend In Me’ (from Toy Story) to emphasise Fika and Fishy’s growing friendship, and the almost cartoon-like way the passage of time is announced. The team also attempts to develop each character through backstory, such as Fishy’s keen awareness of her mortality (from short-term memory loss to losing scales), and Fika’s complicated, abusive relationship with his master. The friendship between the two pets is one between a two souls that are jaded and broken, and somehow, offer sources of hope and motivation to each other, eventually having to rely on each other to find their happiness. 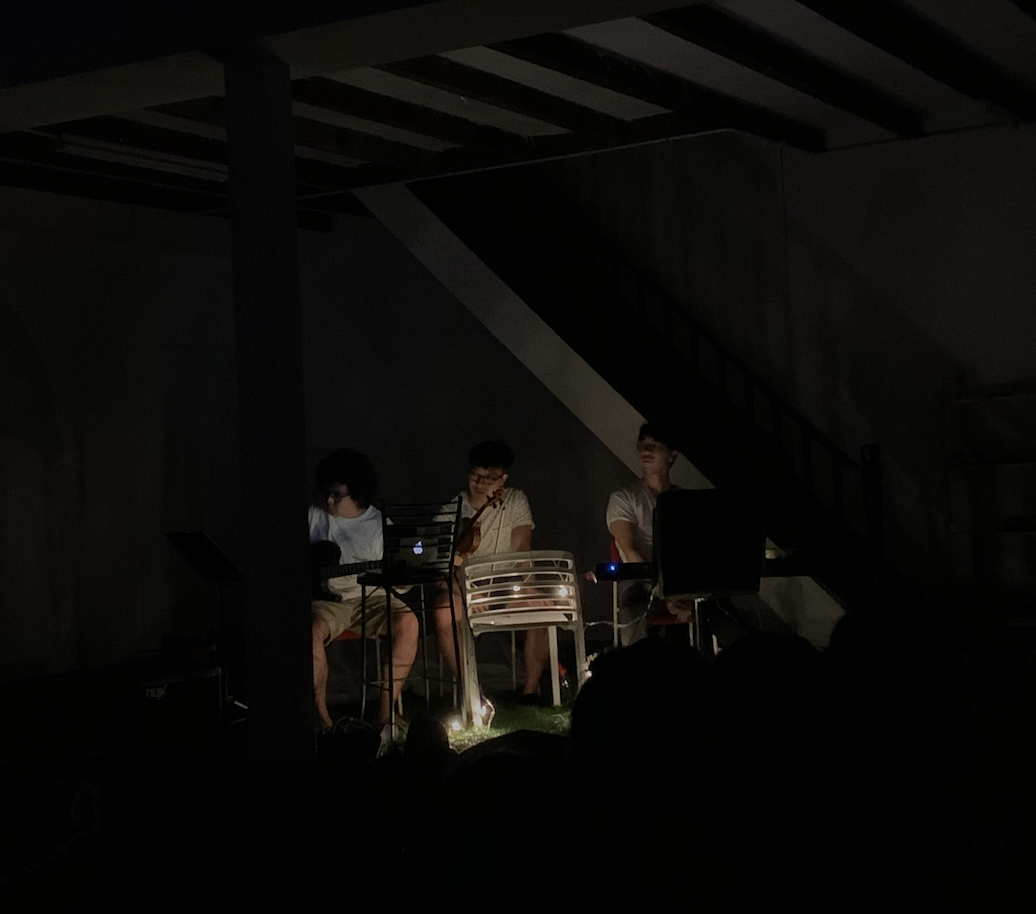 Where Fika & Fishy falters however, is in its execution. Very often, Fika & Fishy comes across as the product of far too many ideas for a one hour play to embody. Certainly, it shows that Patch and Punnet is willing to experiment and showcase a range of skills, such as the use of puppetry (as performed by Zulfiqar Izzudin and Jodi Thiele), but these end up bogging down the play and feeling as if the play itself isn’t sure of its identity or what it hopes to bring across with these varied aesthetics. There is the distinct sense that Fika & Fishy feels like the sum of its parts rather than a cohesive whole, considering certain moments that jar and make the play drag, such as a last minute explanation of Fika’s tragic backstory that does little to add sympathy to what we already know of the character. 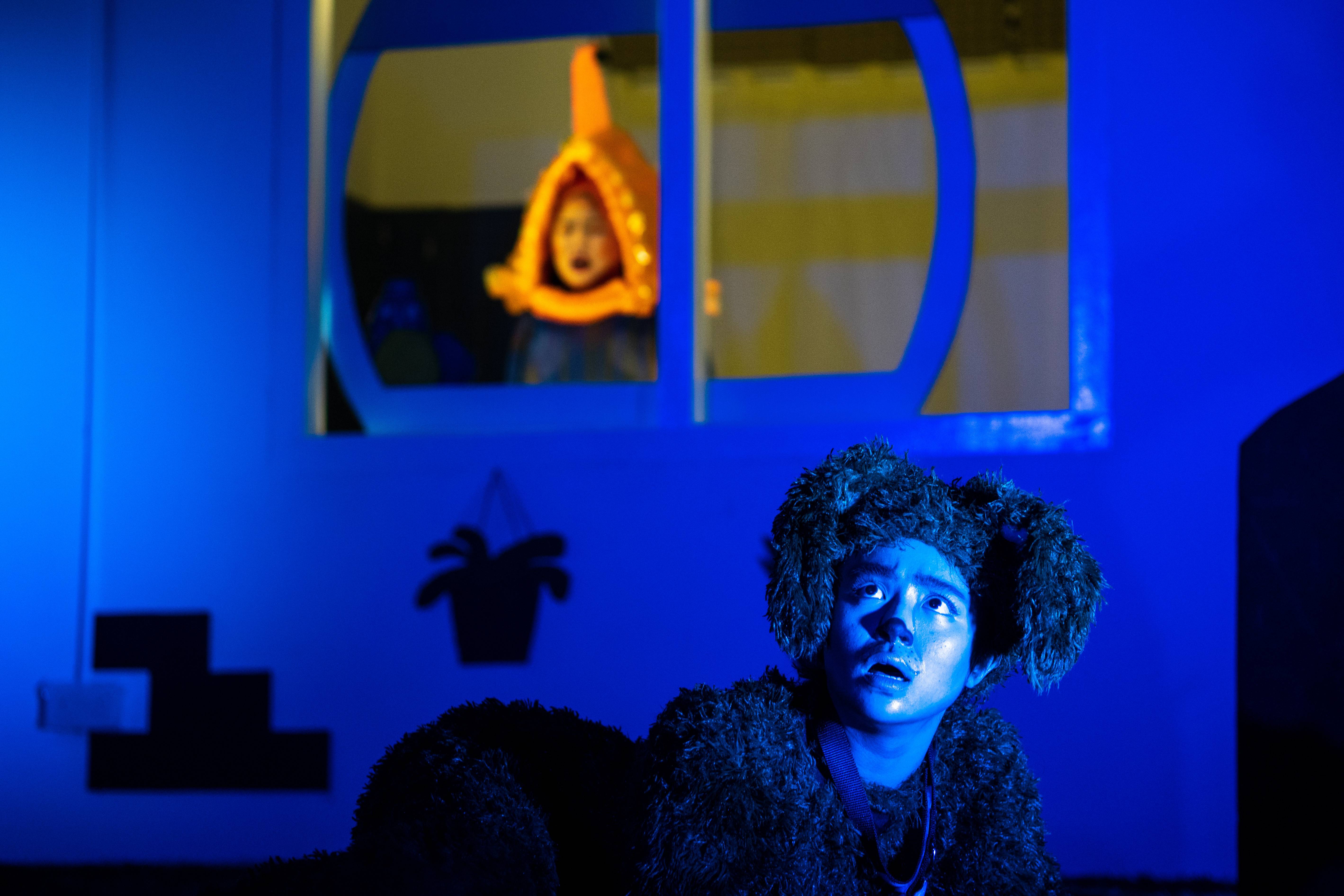 The crass humour employed in the script also relies too much on foul language and ‘shock’ tactics as a crutch rather than incorporating it organically into the story. Jokes are not jokes if they rely on audiences laughing at tongue-in-cheek references such as Fika being a ‘furry’ or vulgar language without reason. The pets also lack a level of innocence and ignorance, reducing the effectiveness of jokes that revolve around their not understanding the human world. One feels that as a show that intends to shock with its content, there is not enough push to elevate that with each scene, instead remaining at the same level throughout the play. 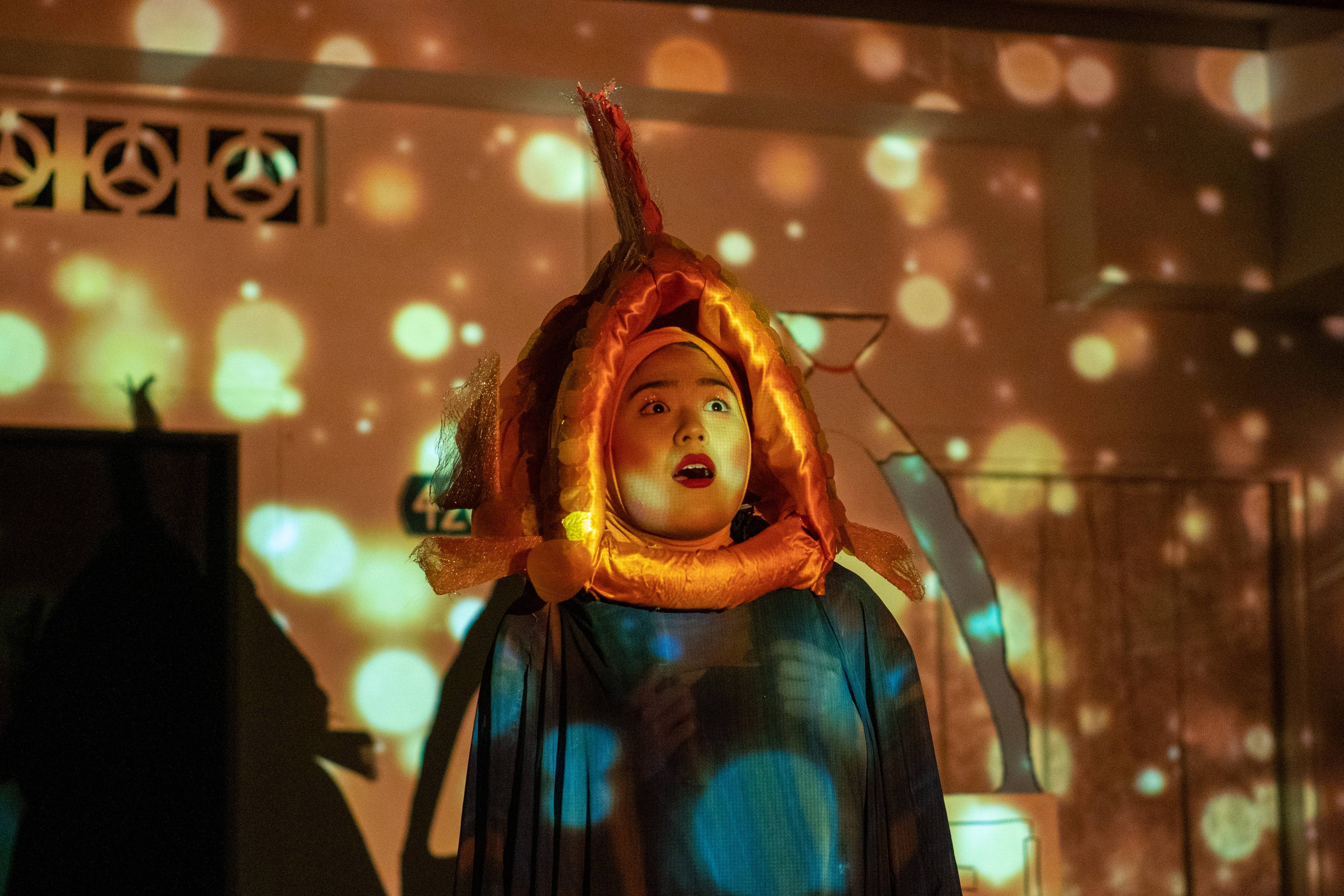 By the time we reach the play’s denouement, the lack of cohesion between the comedic elements and the emotional ones prevent us from fully feeling the impact of the final scene, leaving it with a flat ending. With Fika & Fishy, there are good intentions, a concerted effort to craft an intimate, quintessentially millennial experience, and a quirky work that shows potential. But at this juncture, Patch and Punnet in essence, still feels stuck in their comfort zone, producing work that finds its appeal in a niche audience without pushing their artistry further. If they are to grow, there is a need for a stronger curation of ideas, tighter scripting, and a clearer idea of what it is they stand for as a company, and how their work can fulfill that and act as a step forward for the company’s future. 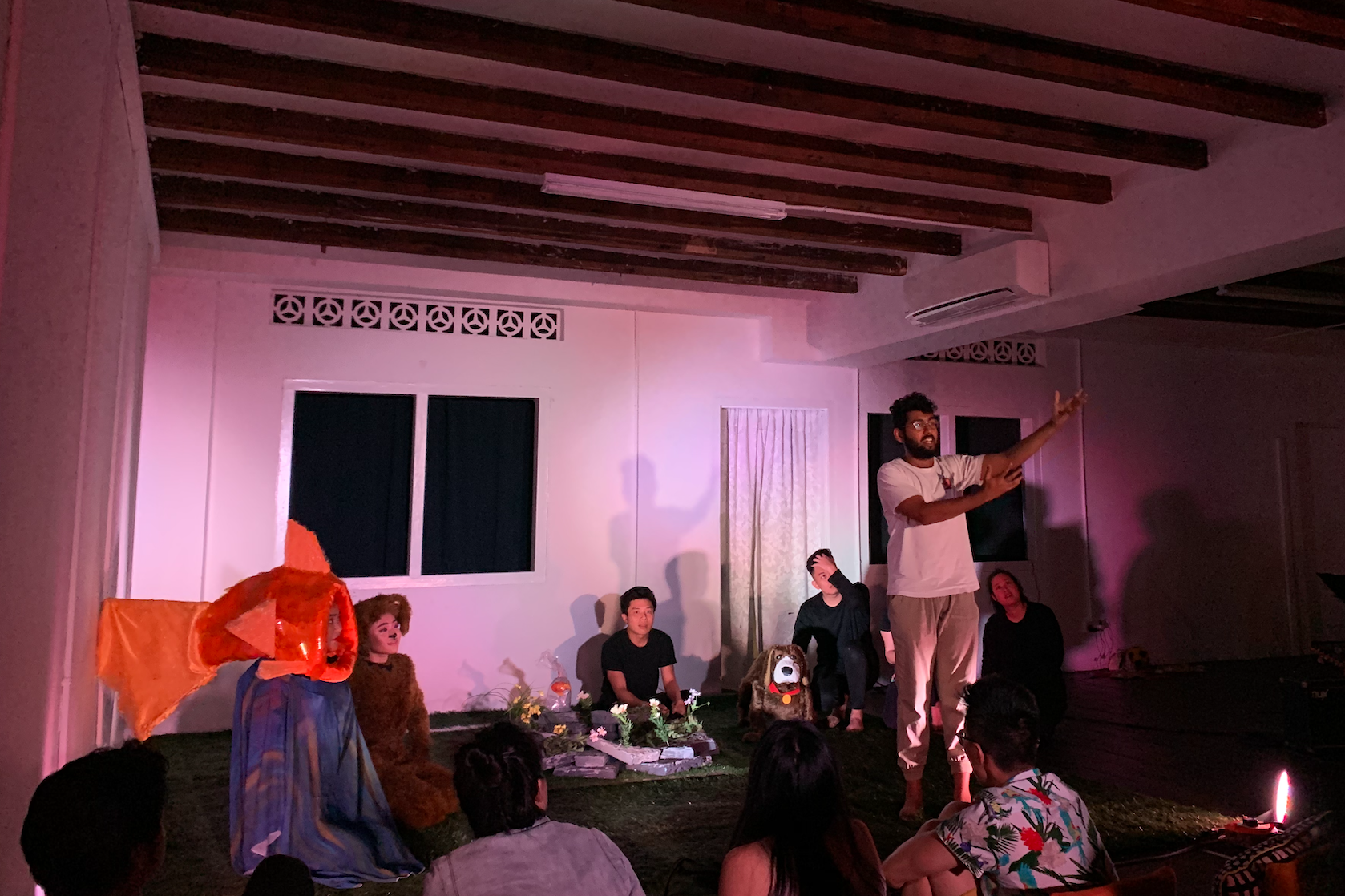 1 comment on “Review: Fika & Fishy by Patch and Punnet”