Effective adaptation of How Drama’s signature show for home viewing.

While not all shows work as well when adapted from live theatre to digital form, How Drama’s Fat Kids Are Harder To Kidnap has found a natural transition from stage to screen with their newest edition, exclusively on Zoom.

Retaining their usual format of a sketch marathon, Fat Kids Are Harder To Kidnap On Zoom sees the ensemble of Ross Nair, Pavan J. Singh, Nicholas Bloodworth, Victoria Chen and Vester Ng working together to perform 15 playlets in 30 minutes, with the order completely decided by the live audience. Directed by Melissa Sim, and co-written by Sim, Jeremy Au Yong and the cast, not only did the entire show take place over Zoom, but also, concerned itself with all matters relating to COVID-19 in Singapore. 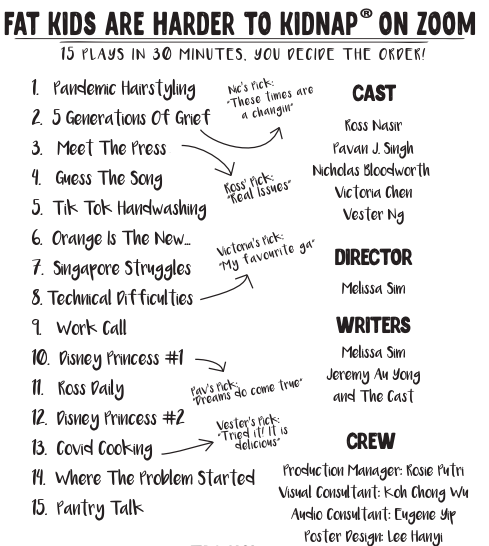 Despite transiting to an online medium, How Drama has managed to adapt the show well for a digital format. Watching the cast act out each playlet feels surprisingly normal, as if every scene was written for presentation on Zoom, and not force fit to the medium. Despite being stuck at home, effective use of Zoom backgrounds allows cast members to live out their Disney princess fantasies, or features creative use of rooms such as the kitchen or bedroom as sets. There’s also an impressive range of skillsets shown by the cast, from puppetry to recreating TikTok trends. Even online, Fat Kids Are Harder To Kidnap manages to maintain strong cohesion and chemistry between cast mates, and it is to the credit of the team that they achieve this despite being physically apart. From the way they know where to look at the camera, where to position themselves, and to bring out their individual personalities to the audiences on the other side of the screen, it’s testament to how many rehearsals and how much heart How Drama has invested into this production.

The humour of Fat Kids is also once again on point. No issue is spared, from commentary on the work from home situation to the government’s response to the crisis, with the punchlines landing easily, thanks to each issue’s relevance and relatability. One particularly fun sketch sees the ensemble as part of a press conference, as Nicholas Bloodworth fends off inane questions from the media. If anything, the range of topics will likely allow almost any audience member to find at least one sketch that resonates.

The presence of a countdown clock also elevates the experience by adding a dose of adrenaline to the already fast-paced show. With one eye on the clock and another on the performance, there is a natural element of excitement as we watch the cast go down the list of sketches, and moments where we wonder if they’ll be able to complete their challenge in time. This is a show that is never short of energy and enthusiasm from the cast, committing fully to every sketch.

With 38 seconds to spare, the cast emerges triumphant by finishing within the time limit, and a sense of achievement that’s felt across the screens. Fat Kids Are Harder To Kidnap On Zoom is a professionally staged show that’s likely to put on a smile on your face as we reach the end of Phase 1 and giving us positive vibes for the beginning of the “new normal”, and proves that How Drama has devised a formula that works, regardless of medium.

Performance attended 13/6/20, as part of a preview to the actual show.

Fat Kids Are Harder To Kidnap On Zoom plays on 20th June (SOLD OUT), 21st June, 27th June and 28th June. All shows will start at 9pm. All tickets available from Peatix.

5 comments on “★★★★☆ Review: Fat Kids Are Harder To Kidnap On Zoom by How Drama”