Following the re-opening of their theatres this November, Wild Rice has announced four more upcoming shows, each helmed by an up-and-coming director. These theatremakers were each part of Wild Rice’s Directors’ Residency Programme, and comprise Victoria Chen, Hazel Ho, Sim Yan Ying ‘YY’ and Thong Pei Qin. All four directors were selected from an open call in April, which garnered more than 60 submissions, and over the past six months, have been honing their craft in collaboration with Heng to bring their creative visions to life.

“When COVID-19 compelled the closure of our theatre, we made a decision to pivot from presenting shows to incubating projects – we took the opportunity to invest in the future of Singapore theatre,” says Ivan Heng, Founding Artistic Director of Wild Rice. “We are always on the lookout for new voices, new stories and new ways of thinking and talking about who we are. With these remarkable young artists, we were able to create a space to learn, experiment and innovate.”

Each director was given the opportunity to choose and develop their script, cast and rehearse with their actors, assemble and lead a design team and more. Originally slated to be staged in a black-box setting, all four productions will now be presented in Wild Rice’s main venue – The Ngee Ann Kongsi Theatre – giving each director the challenge of directing a thrust-stage production. Over the next few months, audiences will have the opportunity to watch the following exciting new productions, which cover topics as diverse as hoarding, living in modern-day Singapore, office politics and grief. 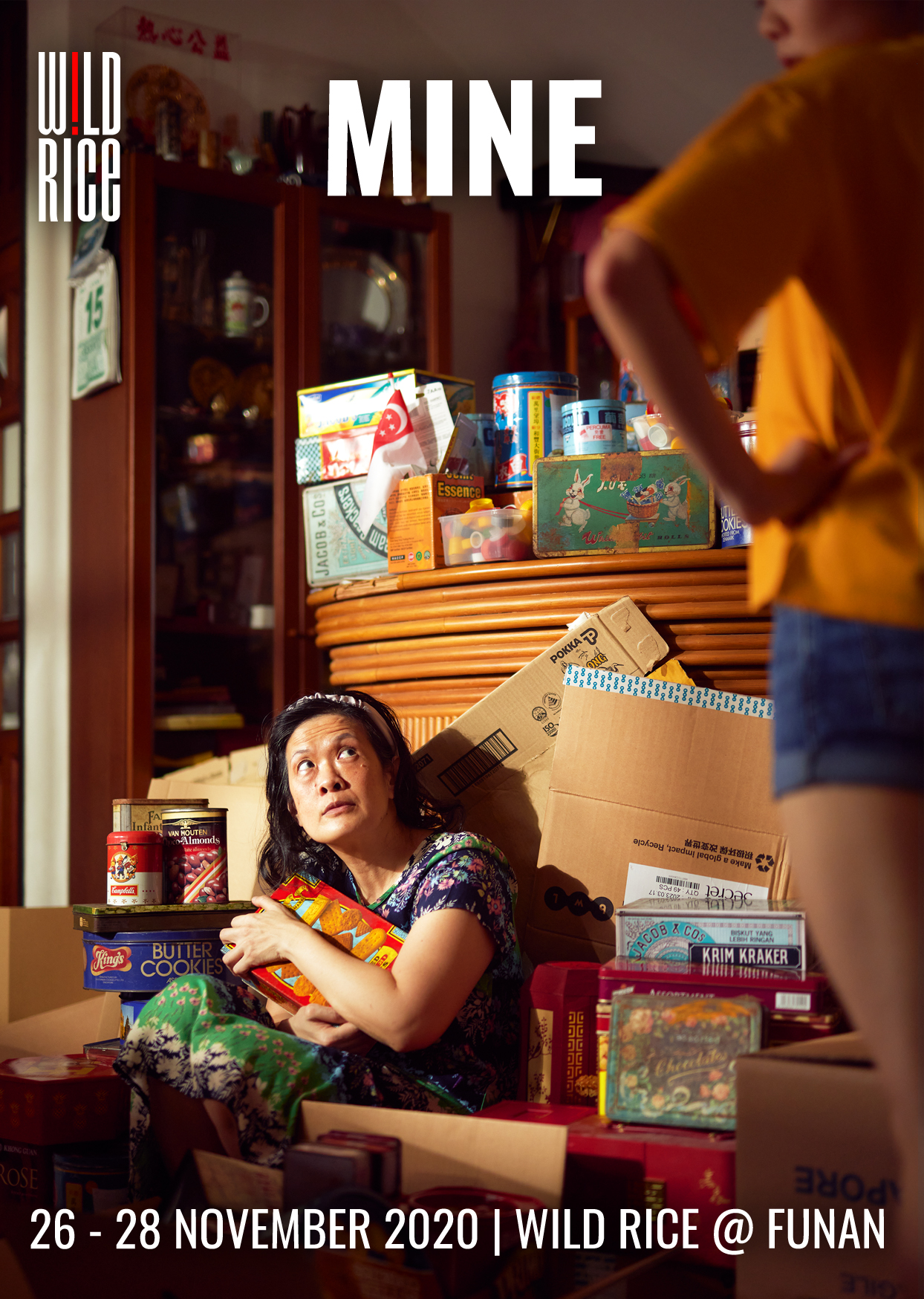 At the end of November, look out for Thong Pei Qin’s Mine. Based on a script by Tan Suet-Lee, the work-in-progress stars Chanel Chan and Karen Tan, and follows the collision course of a mother and daughter who clash over issues of hoarding, histories and secrets, in this humorous and heart-breaking performance. Says director Pei Qin: “Mine resonates with what is actually happening in Singapore currently, as family members rediscover their relationships with one another during Work-from-Home arrangements, stepping on one another’s toes when spaces at home start to overlap, when boundaries are blurred. The play asks how far we would go to protect a loved one, even if it means hiding the truth from them, and looks at whether love can withstand the stress of confronting our deepest secrets and fears.” 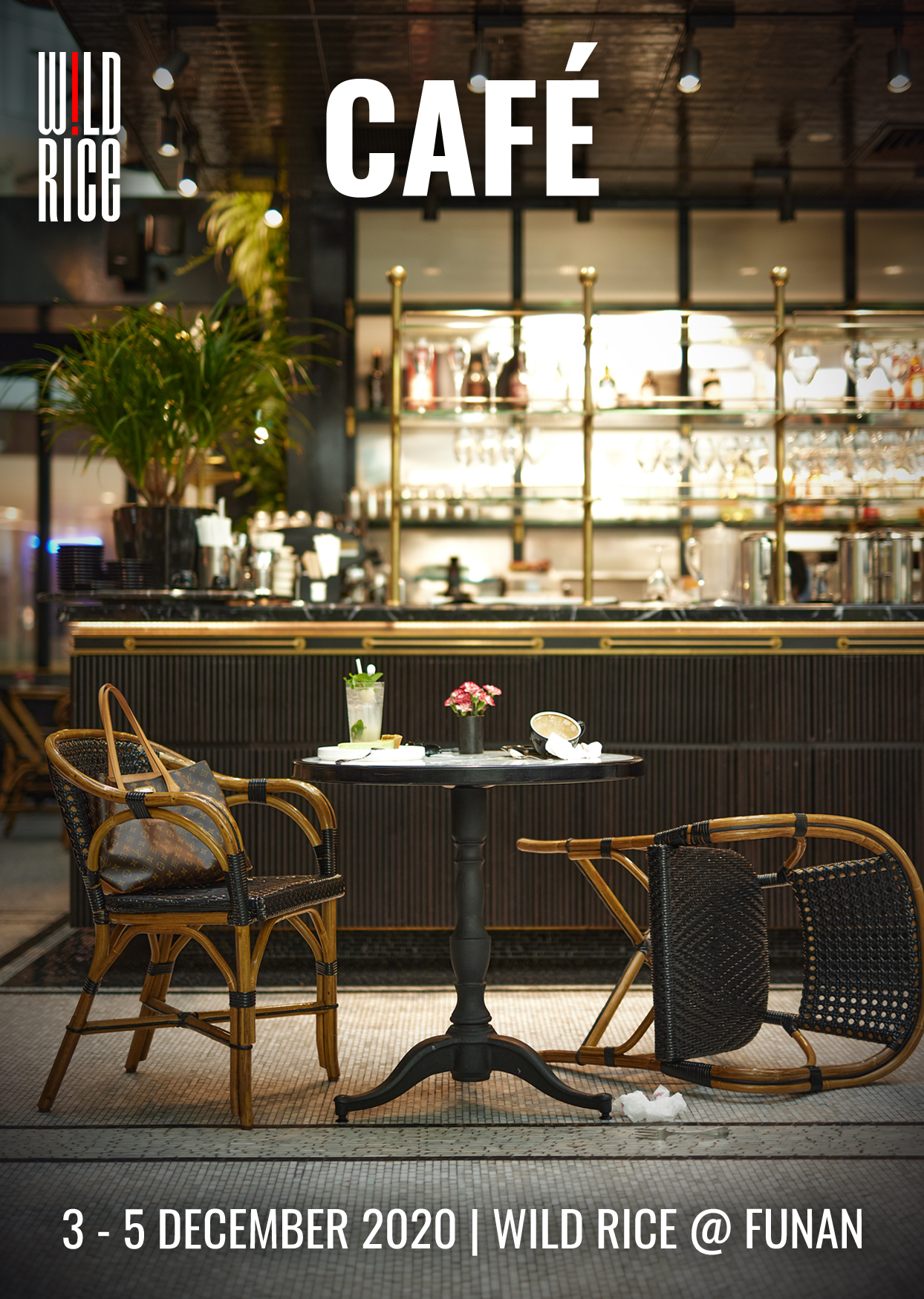 Previously staged as part of the Twenty-Something Theatre Festival in 2016, Joel Tan’s Café will receive a restaging this December, as helmed by Hazel Ho. Starring Adib Kosan, Ants Chua, Darren Guo, Elizabeth Loh and Seong Hui Xuan, Café is a darkly absurdist comedy taking place in a café in Singapore. Written at the height of café culture, watch as stories of café patrons and staff collide in high-stress Singapore, while something even worse than bad coffee is brewing. Says director Hazel: “Café really appeals to me because I like its brand of dark, absurd humour. I think it has something extremely profound to say about how we live in Singapore. It’s a Joel Tan play, so it’s very Singaporean and full of local flavour and immensely relatable, and the questions it raises, while timeless, will have many additional layers now because of the state of Singapore and the world in 2020, right smack in the middle of a raging pandemic.” 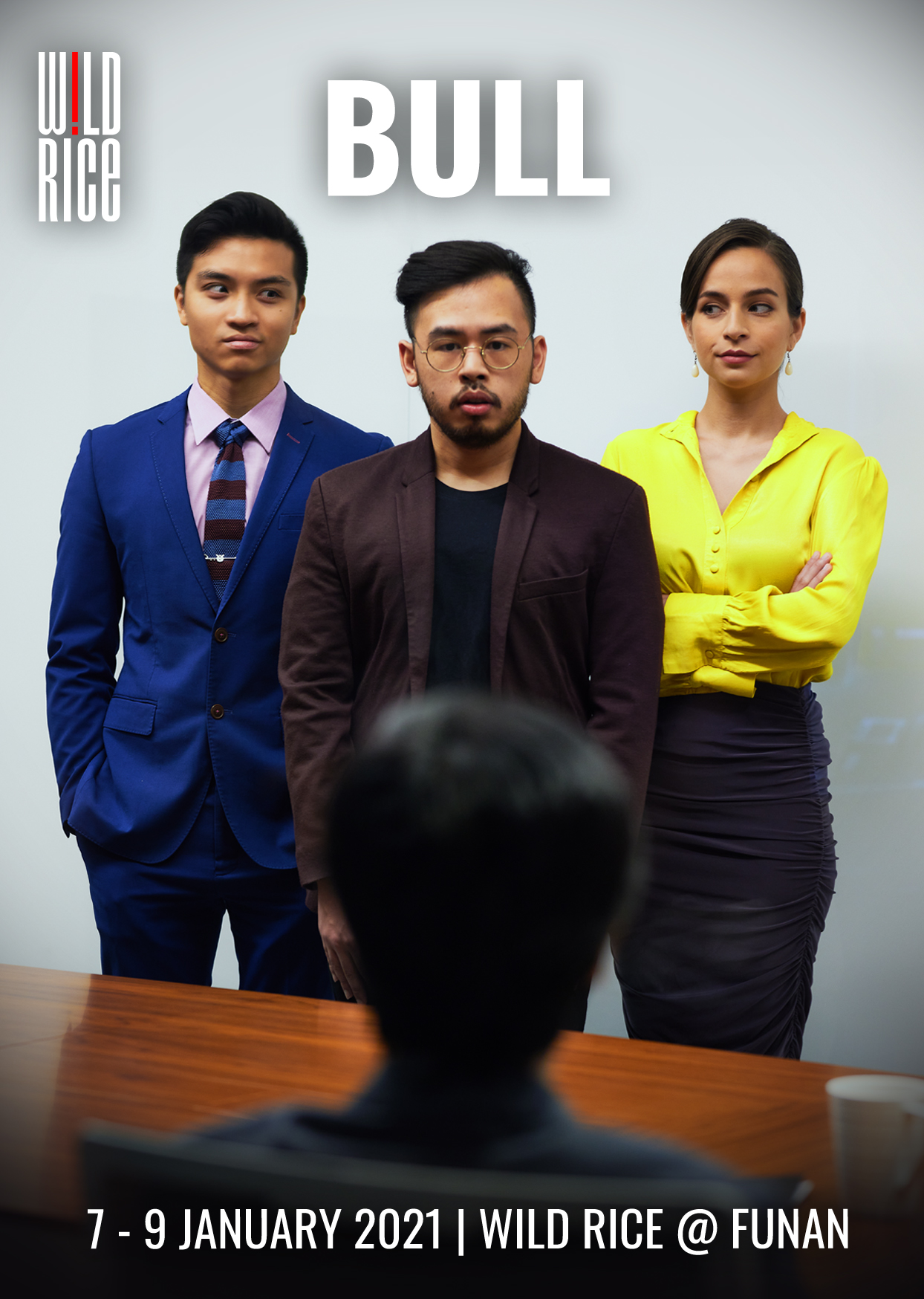 Come 2021, Victoria Chen will direct a production of Mike Bartlett’s award-winning Bull, a sharply written black comedy starring Dennis Sofian, Brian Nai, Oniatta Effendi and Selma Alkaff. Watch as a company undergoing downsizing puts the pressure on its employees, and the only thing on their mind is survival, with no blow too low if they’re to make one final good impression for their boss. Says Victoria: “This play strikes me to the core! I shook with rage the first time I read it. The second time, I was angry, then helpless. Bull examines the ugly side of our society by lifting the veil on vicious office politics. Did you know a recent survey found that 1 in 4 employees in Singapore feel bullied in the workplace? We have all been trapped in a sick game of backstabbing and gaslighting in our professional lives. It really makes you wonder how far people will go to rise up the career ladder.” 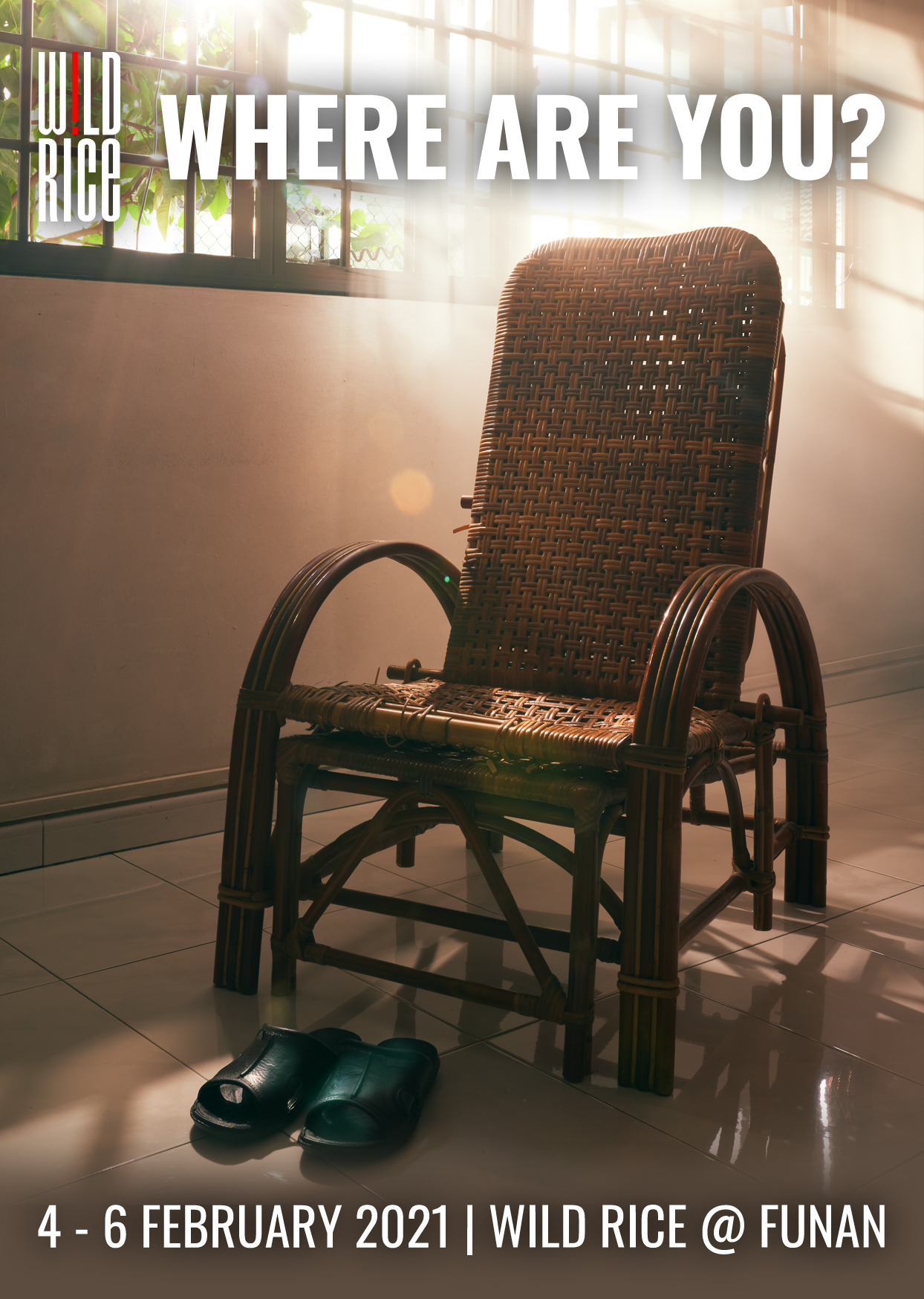 Finally, the showcases will conclude in February 2021, with a live version of Sim Yan Ying’s original work Where Are You? First conceived and staged at New York University’s Tisch School of the Arts in 2019, and receiving a digital production in October 2020, Where Are You? is now newly devised by Yan Ying, alongside cast members Al Hafiz Sanusi, Hafeez Hassan, Deborah Hoon, Aiswarya Nair, Rachel Nip, Shanice Nicole Stanislaus and Zora Smith, as they weave together personal stories and cultural perspectives to tackle and understand the undying issue of grief. Says Yan Ying: “Where Are You? was born out of confusion and chaos during a time of immense personal grief. I realised that my way of grieving was to cling to every ritual and every superstition, which had previously made little sense to me. I later became curious to find out how people across cultures come to the grieving experience, which is both so universal and specific, and then what would happen if we put these stories, which are often social taboos, on stage to share with an audience. I hope that audiences will be able to find some resonance with Where Are You?, whether it is feeling comforted in their grief, gaining a newfound courage to speak openly about death, or even taking with them some joy and lightness from the show.” 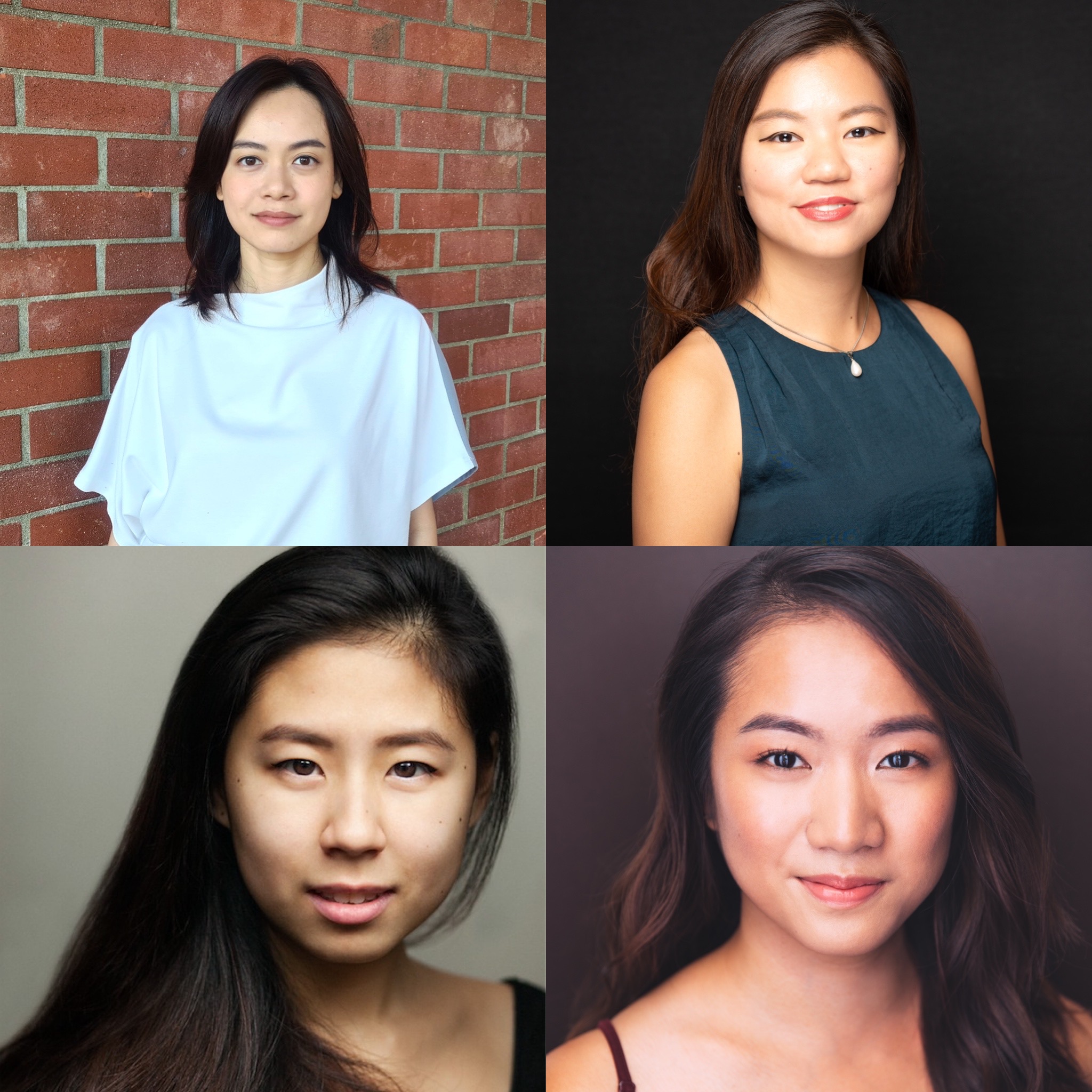 Working with Wild Rice has also been a challenging and rewarding learning experience for the four directors. “Under Ivan’s mentorship, I am stretched in all the right ways so as to make me confident enough to take control of my creative ideas and commit to them wholeheartedly,” says Victoria. As part of the company’s commitment to celebrating and uplifting new voices, Heng took care to select directors who were willing to push the envelope and try different things.

“I was pleasantly surprised when my application was accepted by Wild Rice, as it seemed to deviate from their existing body of work,” admits Sim. “In addition to the trust that they have placed in me, I thoroughly appreciate the leap of faith that the company is taking in programming a devised physical theatre production.”

Each director also received full financial, marketing and production support from Wild Rice’s entire team, for which they are grateful. “The Wild Rice team and Ivan are all very, very experienced and knowledgeable in what they do, so being part of this residency has given me the invaluable opportunity to learn from them by osmosis,” says Ho.

Significantly, all four directors under this programme are women – who remain underrepresented in this capacity in the arts industry. “I do get a kick out of everyone being female,” Thong observes. “It really speaks to a new kind of leadership and new ways of creation in our local theatre scene. I am excited for what the future of our industry holds, and am proud to be in the company of these bold, young women, who I know will be making changes right here in Singapore!”