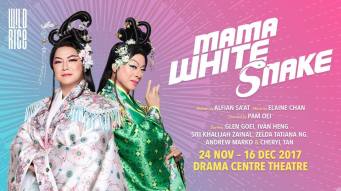 It’s the end of the year, and frankly, it’s been a long one, one that’s left us somewhat drained, a little emotional, and wanting a break. It’s times like these you want to watch a show that’s entertaining, yet mature enough in its ambition to strike an emotional chord. Thankfully, Mama White Snake is just the right medicine the doctor ordered and ends off W!ld Rice’s 2017 season on a high note. 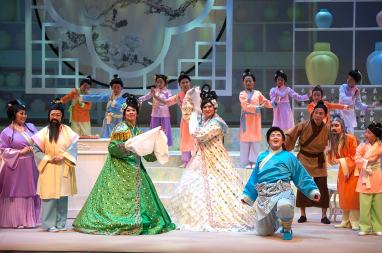 Headlined by W!ld Rice co-artistic directors Ivan Heng and Glen Goei (in a welcome return to the stage after 30 years), along with a stellar cast of both veterans and newer actors, W!ld Rice resident playwright Alfian Sa’at re-interprets the Chinese legend of Madam White Snake for a new audience, putting a unique spin on it by focusing on the eponymous White Snake’s role as a single mother, as opposed to usual depictions of her as a demoness or legendary lover. Mama White Snake is perhaps W!ld Rice’s most spiritual pantomime yet, weaving in concepts of Yuan Fen (or serendipity) and Yin/Yang (balance) to present familiar themes of family, acceptance and love in a whole new light. Yet even amidst its trek into Eastern philosophy, Alfian Sa’at always keeps the tone light and accessible, with the occasional pop culture reference and above all, plenty of heart.

With 3 months of training and 7 weeks of rehearsals behind them, the cast shines in just about every appearance. Glen and Ivan, as the snake sisters, bring their diva A-game to the stage, chewing the scene each them they enter and looking like they are absolutely in their element. True to their 41 years of friendship, they have incredible onstage chemistry, exchanging quips and compliments, and that same friendship lines the entire show with an air of honesty and emotion as they work to save each other. Chew Chien Choy and son Gordon Choy have choreographed both the Chinese opera and wushu elements perfectly, and both Ivan and Glen stun with their fantastic, elegant swordplay, and even a breathtaking ‘spear kicking’ fight sequence that left us in awe.

Beyond its actors, there’s plenty to enjoy in this new adaptation of the Chinese legend. Composer Elaine Chan and her multitalented live band have done a great job of capturing the mood and character of the entire play, showcasing a diverse range of genres as well as incorporating traditional Chinese instruments ranging from an erhu to Chinese drums into the lineup. One highlight would be ‘People Are Dangerous’ performed by Ivan and Glen, sounding almost like a Chinese tango, while Cheryl Tan’s strong voice is perfectly utilized in numbers such as ‘Curious’ and ‘Yuan Fen’, marking her as a rising star to keep watching in the years to come.

Visually, each scene is an absolute treat, supported by Bryan Gothong Tan’s multimedia design that practically pops out of the screen, as well as Wong Chee Wai’s huge, colourful set that immerses its cast in a believable oriental fantasy. The 125 costumes from Tube Gallery are lovingly, intricately designed works of art, with special mention for Ivan Heng and Glen Goei’s collection of outfits, arresting in their bold, vivid colours while perfectly encapsulating their characters’ over the top personalities. The huge ensemble of 22 children from W!ld Rice’s First Stage programme is well utilized, bringing a sense of volume to the stage and a keen energy that emanates from their bodies. One can only imagine the amount of work that director Pam Oei and choreographer Andy Benjamin Cai must have put in to get these movements just right, in particular a rousing training scene that incorporates impressive wushu techniques precisely executed. 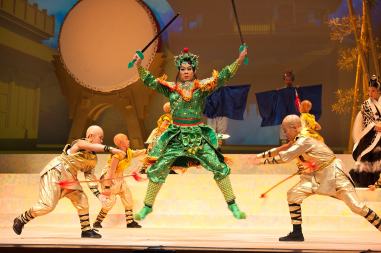 With Mama White Snake, W!ld Rice has delivered a fantastic year end pantomime once again, going beyond pure entertainment to truly perform a theatrical extravaganza to be proud of, with high production value, unforgettable scenes and a strong, energetic cast who’re clearly enjoying themselves as much as we are. Bring your friends, bring your kids, bring your grandparents – Mama White Snake is the perfect anti-venom to counter the year end madness, and sure to slither right into their heartsss.