A loving tribute to Chinese comedians and comedy in all its forms.

In our childhood, we recall many nights glassy eyed and glued to the television while wolfing down our dinners. There’s a keen sense of nostalgia associated with the act of watching television, remembered mainly as a family activity and one of the few times we truly get to kick back, relax and just enjoy a show together.

In Toy Factory’s Masters of Comedy, director Goh Boon Teck and playwright Ong Johsen Johnson have teamed up to present a loving tribute to Chinese comedy over the years. Masters of Comedy takes on a TV variety show format similar to shows such as Singapore’s very own 搞笑行动 or the critically-acclaimed American Saturday Night Live, tackling everything from early dialect programmes or even wuxia dramas, all the way to iconic comedians such as Jack Neo and duo Wang Sha and Ye Feng. No piece of television history is safe from the hands of Sugie Phua, Judee Tan, Jo Tan and Wang Weiliang as they lead and host each ‘segment’ of the programme. 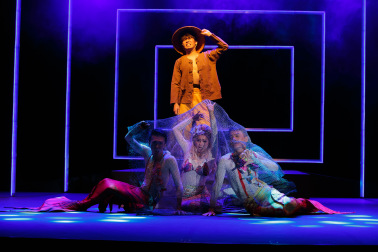 One feels like an audience member in a television recording studio as each of them saunters out in blindingly colourful suits by Ian Wang, opening the entire show with a big hearted song and dance number as Yo Shao Ann’s set of multiple concentric squares flashes across an entire rainbow of hues. They’re joined by supporting cast members Shuyi Ching, Vanessa Pang, Lim Jun Jie Jey and Soki Goh, delightfully chirpy and energetic beyond measure as they perform parodies of familiar television ads between segments, from Guinness all the way to the unforgettable Myojo jingle. 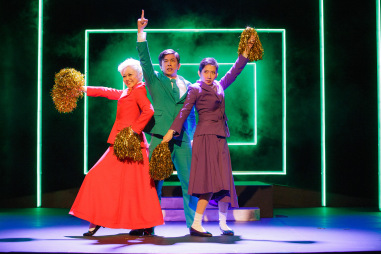 Johsen’s smart script is rapid fire and relentless in its jokes. There’s a good mix of lowbrow and highbrow humour, from clever puns playing on homonyms to misunderstandings in translations, to visual humour ranging from crazy costumes to simple pratfalls. Many of these jokes are blink and you’ll miss it, and it’s to the credit of the main cast that they handle the material with aplomb, able to maintain a strong sense of connection to the audience as they address us directly and deliver the punchlines effectively. 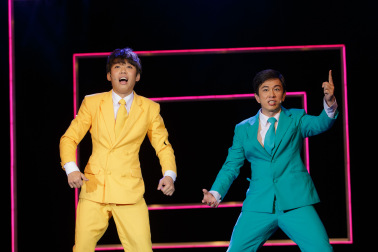 Individually, Judee Tan excels in a loudmouthed parody of Sun Ho, while Jo Tan has perfect comic timing as an internet influencer/vlogger not-so-subtly incorporating product placement into her videos. Sugie Phua, although not usually seen onstage as a comedian, manages to convey the humour in his script with an ease that draws easy laughs, and even manages to impress in a rap number inspired by unusual baby names. Even Wang Weiliang, better known for his film roles, shines when he plays off and responds to the energy and dynamic brought onstage by his fellow cast members.

Masters of Comedy is both a nostalgic celebration of comedy past and fervent proof that the foundations are firmly in place to keep it well and alive even today. As the show concludes with a joyous dance set to the catchy classic 看电视, one cannot help but feel and remember how television has had such a powerful influence on each and every one of our lives. Watching the audience comprising of entire households smiling and laughing, from young children to older grandparents, Toy Factory’s Masters of Comedy is undoubtedly a vivid ray of sunshine that marks the perfect start to the SCCC’s 2018 Cultural Extravaganza, an explosively fun piece of entertainment for all the family.

Masters of Comedy runs at the Singapore Chinese Cultural Centre from 19th – 25th May, Tickets available from SISTIC.

0 comments on “Review: Masters of Comedy by Toy Factory”