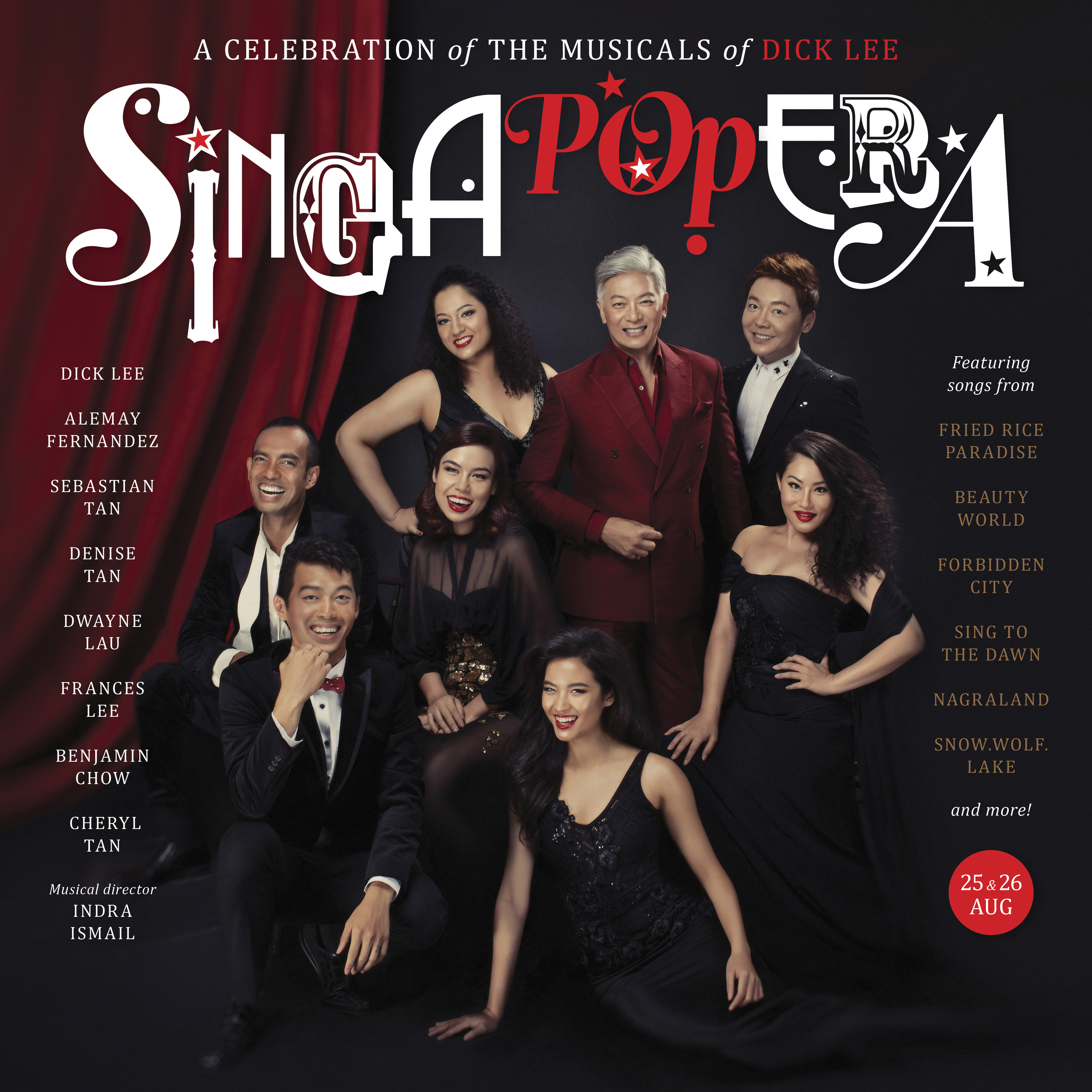 Dick Lee is perhaps one of the few Singaporeans whose name is immediately recognizable. For many Singaporeans, Dick is best known as the composer of ‘Home’, the song most synonymous with National Day. Written abroad while harbouring thoughts of missing Singapore, the 1998 song has since gone on to become a mainstay at just about every National Day Parade, at any and every Singaporean event held abroad, and an immediate source of nostalgia and identity even 20 years on.

Says Dick on his relationship with music and the Singaporean identity: “Some say the search ended with ‘Home’, but I think that’s actually where it started, when I realized I can be Singaporean without trying. It’s something that helped me become more true to my art, and something I’m still exploring even today as I continue to look at our multicultural surroundings.”

This year, Dick is celebrating that Singaporean spirit and identity in full force with a retrospective of his entire career of musicals in a concert this August. Taking place at the Esplanade Concert Hall a couple of weeks after National Day 2018, Singapopera will feature a cast of eight of the brightest musical talents today, handpicked and accompanied on piano by Dick Lee himself, with musical direction by Indra Ismail.

In fact, Singapopera was a show that has previously been staged back in 2007, albeit in quite a different context. Back then, Dick was artistic director of PA Talents, and the show was held at the NUS University Cultural Centre as part of their annual Soundwaves programme, and a more private event than this year’s edition. Says Dick: “Since 2007, I’ve written and composed for quite a few more musicals, and I thought this show really should reach more people. I took a long hiatus before doing concerts again in 2014, 2015 and 2016, and was very encouraged by the public’s warm response to those. Hopefully, this work will help help my ‘pop’ audience discover some of my musical theatre works, alongside the regular theatre-goers already familiar with them.”

On how Singapopera will be different this year, Dick explains how this year’s edition will be grander, with a greater focus on the music and the stories behind each song, rather than the costume-heavy version from 2007, attempting to recreate scenes from the musicals. Says Dick: “All the singers will be seated onstage throughout, sort of like a living room set, as they take turns to perform numbers. I’ll be introducing each song, and the setlist flows not chronologically but thematically, moving between a couple of showstopping solos and faster paced songs, some of which might be lesser known.”

Dick goes on to talk about one of his favourite musicals: the 1997 murder-mystery musical A Twist of Fate, which was last staged in 2005 by the Singapore Repertory Theatre. Says Dick: “Initially, it was constructed to be a small show when it premiered at the Jubilee Hall at Raffles Hotel. It was just a piano and double bass, and because of that I could write intimate, complex melodies, and I’ll be featuring one or two songs from it.”

Dick Lee then gives a knowing wink as he teases new material from a 2019 project: “There was a project I’ve been working on that’s since been dropped, but you can expect an all new musical at the end of next year. It’s going to be something completely different from what I’ve done before – it’s smaller, very intimate, a six woman cast and all Singaporean.”

The cast of eight performing in Singapopera comprise of some of the brightest musical theatre performers today, namely ‘Broadway Beng’ Sebastian Tan, performer and radio DJ Denise Tan, Dwayne Lau, Frances Lee, Benjamin Chow, Cheryl Tan, and jazz veteran Alemay Fernandez. Says Dick: “I’m really proud of our local talent, and I think they’re grossly under-appreciated. I always feel sad that I can’t write a new musical every year just so I can showcase their talents. So in this show, I wanted to give all of them equal exposure with solos and group numbers. Alemay in particular, is so underrated, and when she opens her mouth, she can really bring the house down.”

He continues: “When I was younger, I thought about becoming a musician full time, working constantly at a bar, during happy hour, at the NUS canteen…and musicians today, they still need to work gigs constantly and just make sure their names are always being heard. There’s a part of me that wonders why haven’t we been able to progress from that same problem of my time, that they still face the same struggles and there’s some way to go to make music a really viable career option with the right opportunities and support.”

Dick Lee then drifts into a recount of a corporate event he headed recently. Says Dick: “There’s this international conference, very posh, black tie and all, and it was being held in Singapore for the first time. I was recommended to head the entertainment for that event, and I ended up putting together a show featuring some of the best young local talent we have, such as Benjamin Kheng and Sezairi Sezali, to show them how Singapore was the future. And still the organisers wanted me to sing some local material, like from Fried Rice Paradise to show the world what Singapore was really all about. All these CEOs were interested in Singapore beyond the skyscrapers and designer brands, and after the show, they came up to us and told us how much they enjoyed it. And these were people who had seen Aretha Franklin live!

Brimming with pride with a wide grin on his face, Dick Lee concludes: “I’ve never understood the point of trying to sound ‘international’. I am so proud of Singapore, and know that our talent can go far. Singapopera is really about celebrating that talent, all this music and these musicals and the cast, something we can call our own, and something for audiences to take home at the end of the night.”

0 comments on “Nothing But Pride for Local Talent: An Interview with Dick Lee (Singapopera 2018)”