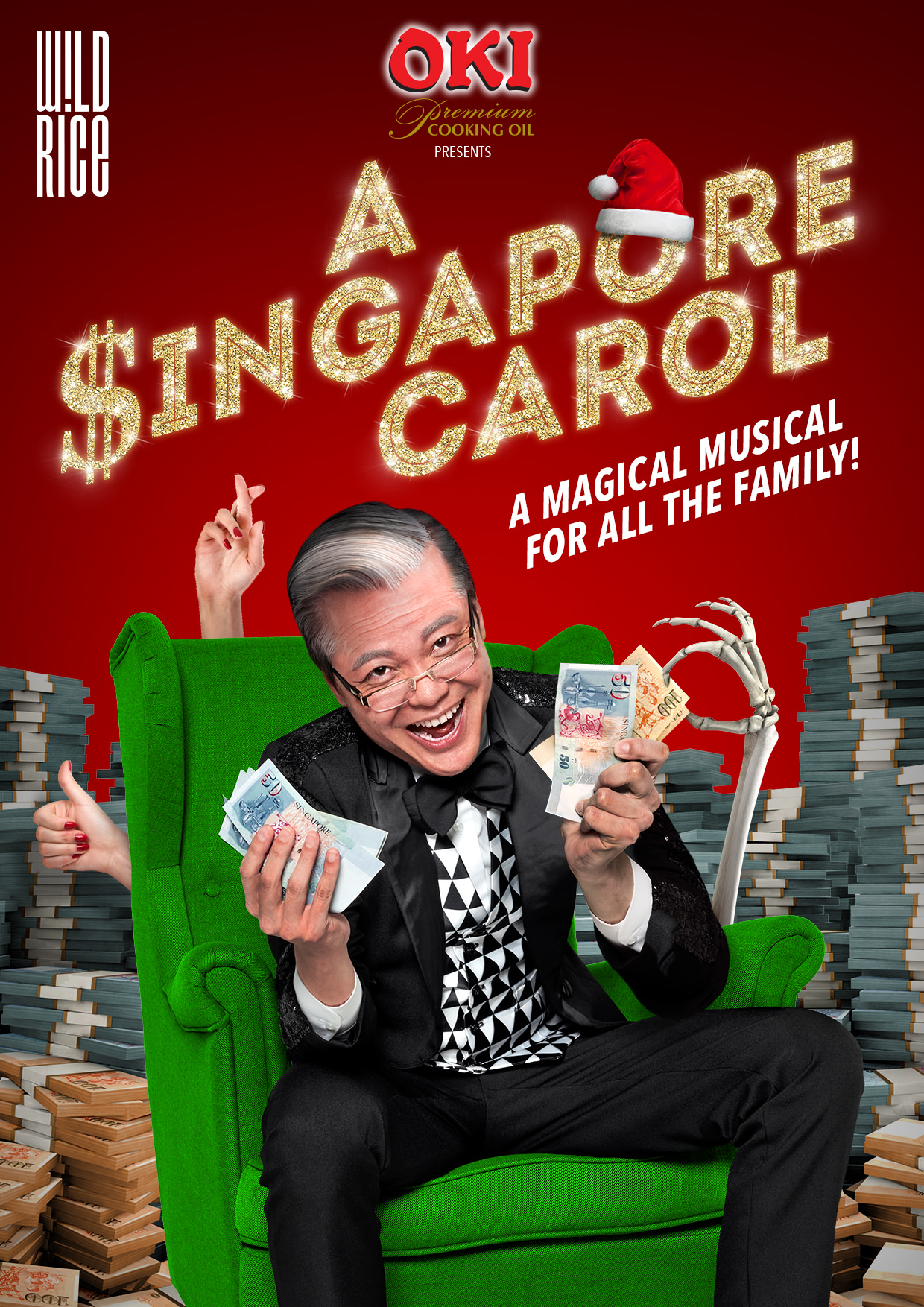 This holiday season, W!ld Rice is going full on with the Yuletide festivities as they power through into their final show of the season – their annual year-end pantomime. This time around, they’re adapting Charles Dickens’ holiday classic A Christmas Carol and putting their signature local twist on it, resulting in A $ingapore Carol.

Written by Jonathan Lim with a musical score by Elaine Chan, get ready for a classic, musical tale as we witness the miserly businessman S.K. Loo have a ghostly encounter that may just teach him the true meaning of Christmas. We spoke to director Hossan Leong, and cast members Sebastian Tan, Dwayne Lau, Terence Tay and Siti Khalijah Zainal to get a sneak peek of what we can expect from their performance, and their favourite Christmas songs. Read the interviews in full below! 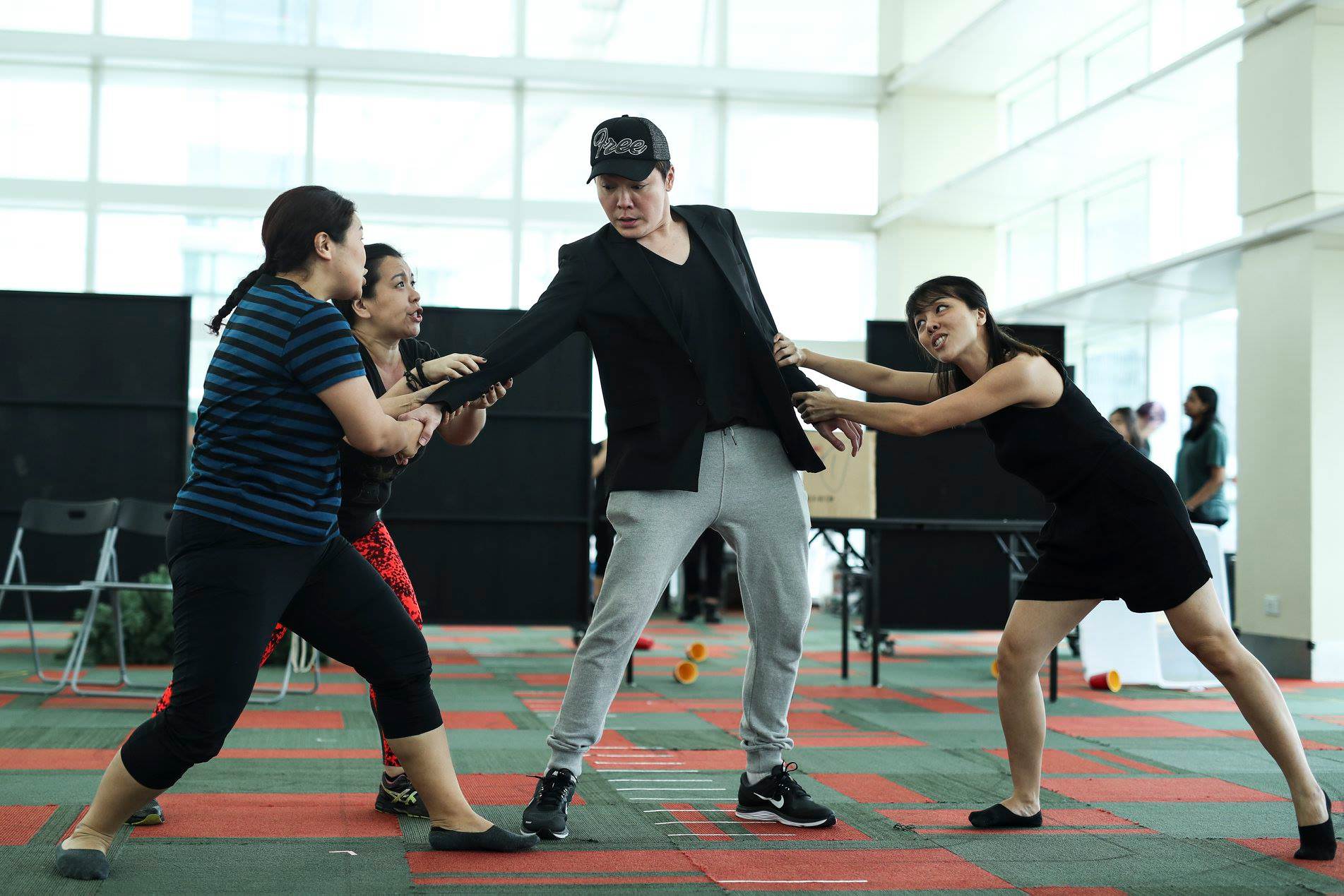 Sebastian: I’ll be playing S.K. Loo, who is our version of Charles Dickens’ Scrooge – a mean, miserly billionaire who’s all frozen up inside.

Taking on this role was a challenge for me. S.K. Loo is a real departure from the appealing and likeable characters I usually play. I’m quite young at heart – it means my own energy is very young. But being so miserable and negative, S.K. Loo has a far older energy. I want the story and the character to connect with the kids in the audience so I’ve had to work on finding humour in his rather awful character. Can I pull it off? Come see for yourself! 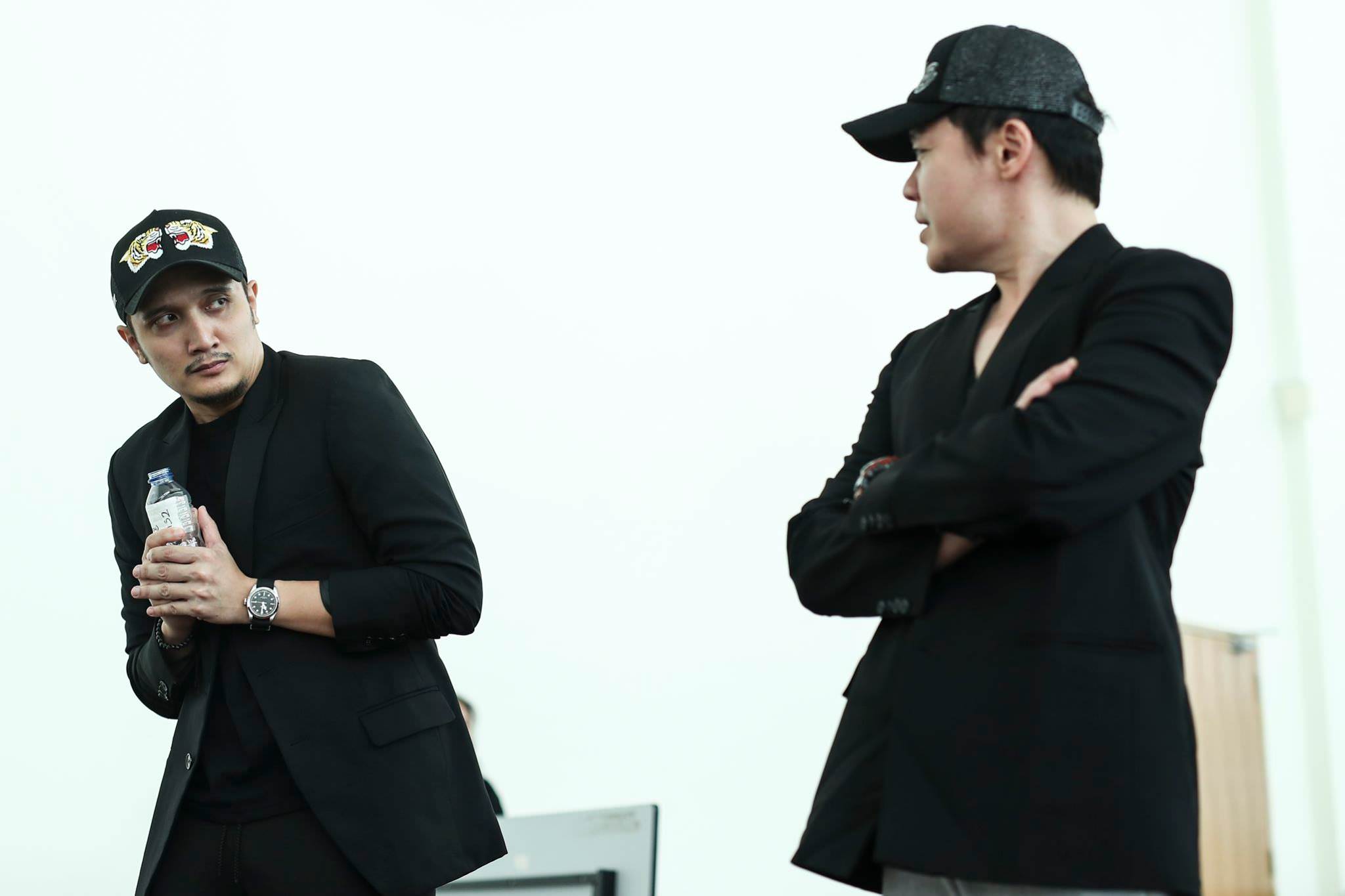 Bakchormeeboy: Which character in A Christmas Carol do you think is most relevant to Singaporeans today and why?

Sebastian: Our Singaporean version of Scrooge is a product of our society. We are taught from young to climb the social ladder, achieve success at all costs, even at the expense of losing ourselves, our souls. Sounds familiar? That’s how I, as a Singaporean, can relate to S.K. Loo. We all could end up like S. K. Loo, a Scrooge. 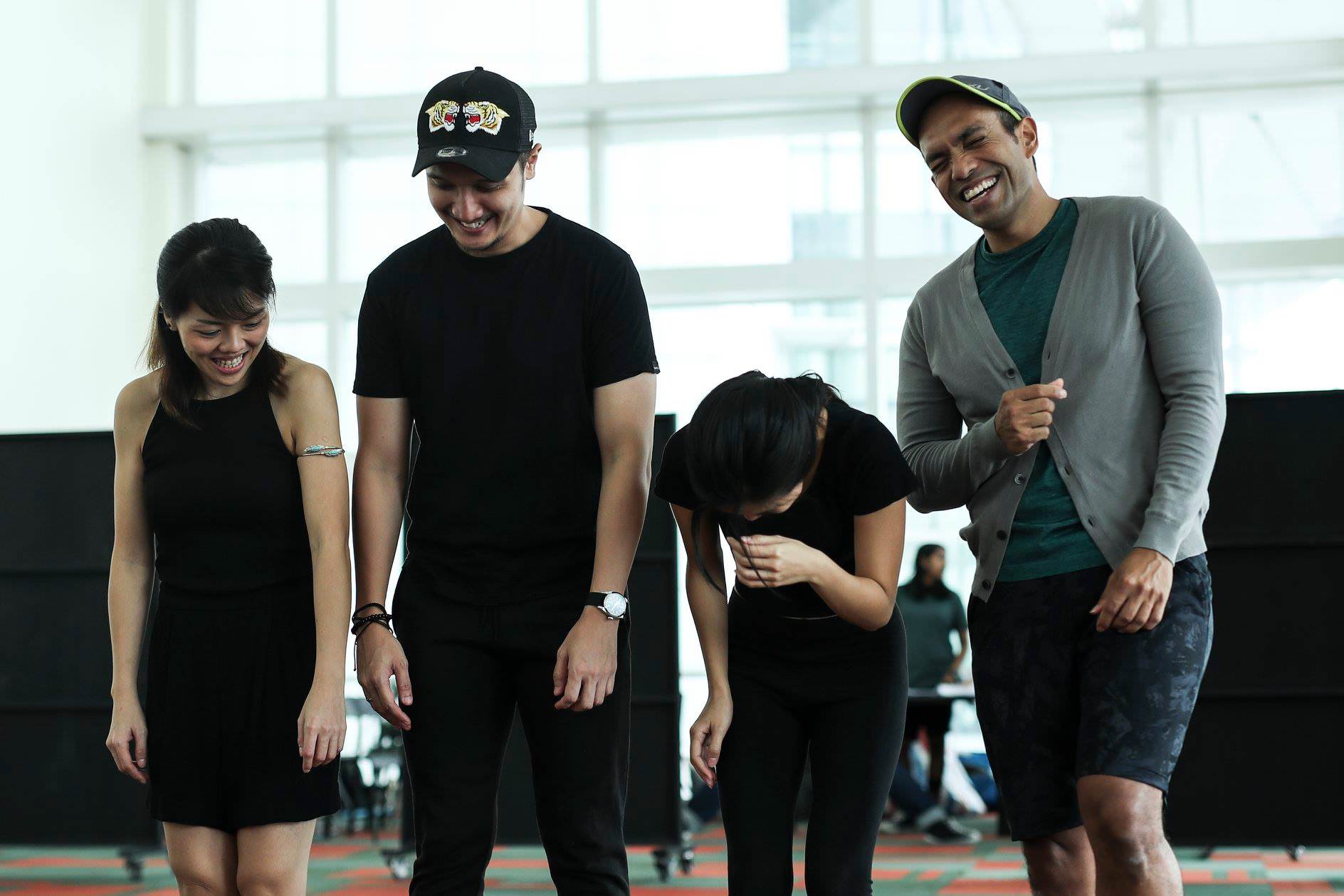 Dwayne: I play Ali Inwan, SK Loo’s late business partner. Who has passed on eleven years. He was shrewd, conniving and business minded while he was alive and is back to haunt SK Loo and warn him change his ways and not end up in hell where he has been sent to suffer for eternity.

I had to read the script several times to get a deeper understanding of the subtext.  Apart from coming to warn his friend, He’s suffering in hell now for all that he’s done, but yet cares enough to warn his Friend to change his ways while he still can. There’s a lot of regret and pain. I’ve watched several versions of Charles Dicken’s A Christmas Carol to get some references of how Marley (The original character in the novel) was presented and then crafted my own version of him in terms of voice and physicality. A lot of observation work as to be done to create an older man in his late 50s, who’s been torturer and tormented.

I also play an Indian security guard, a Chinese Father and a Pinoy Nurse. So I have to work with accents, body shapes and personalities to make sure these 4 characters I play are different and fun in their own way! 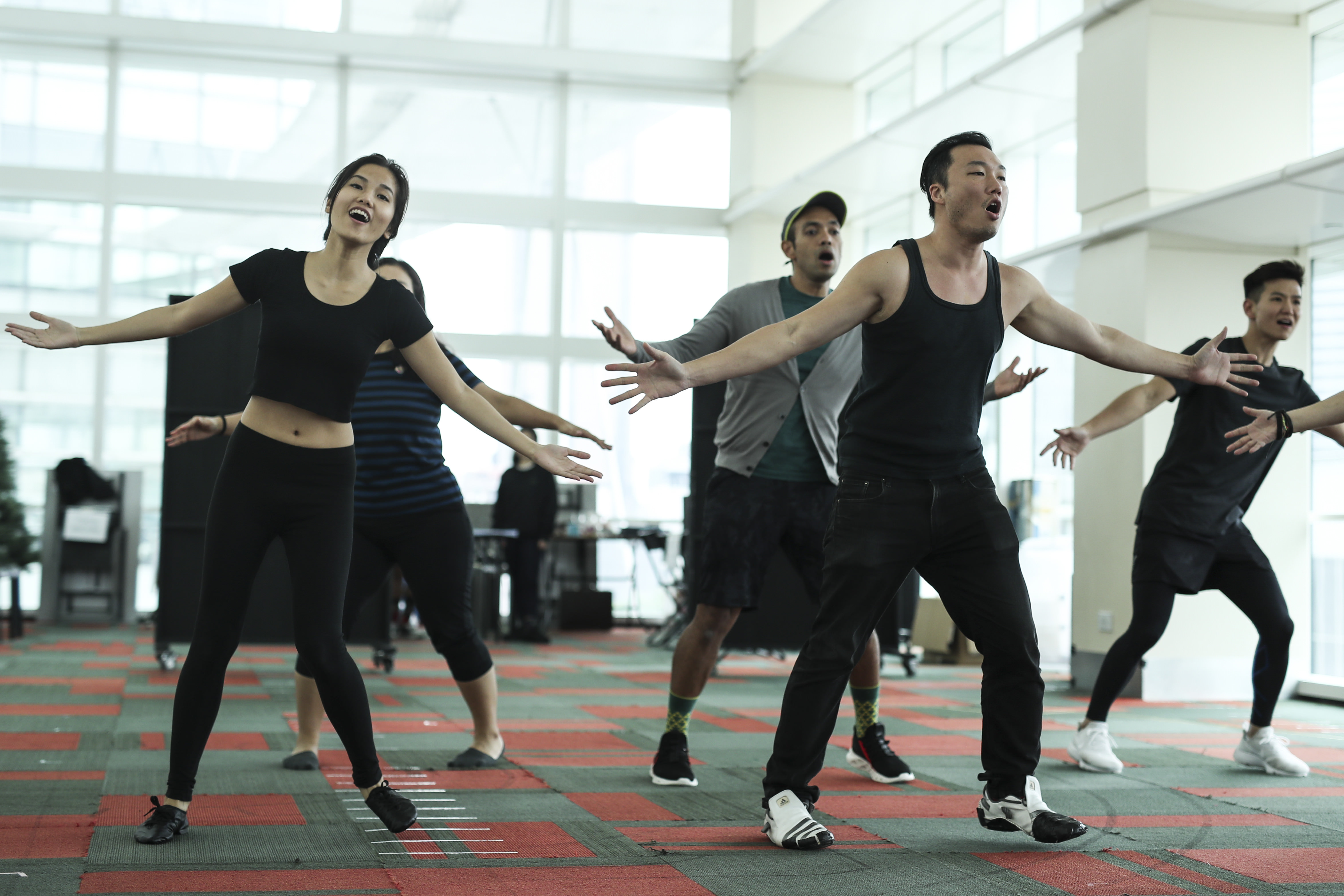 Bakchormeeboy: What’s your idea of a perfect Christmas gift?

Dwayne: My perfect Christmas gift is something that someone has been careful to think through what I might want or need, and has gone out of his or her way to get it. It could be anything! Practical or fun! From a new Bright yellow G Shock, or the Optimus Prime G Shock…or a pair of workout shoes…hint hint! My love language is gift giving so I know the effort needed!

It encompasses the nativity story exceptionally well. Being a Christian, The lyrics are very meaningful and reassuring of why we celebrate Christmas. The tune and most arrangements never fail to give me the chills! It’s wonderful to listen to AND sing! 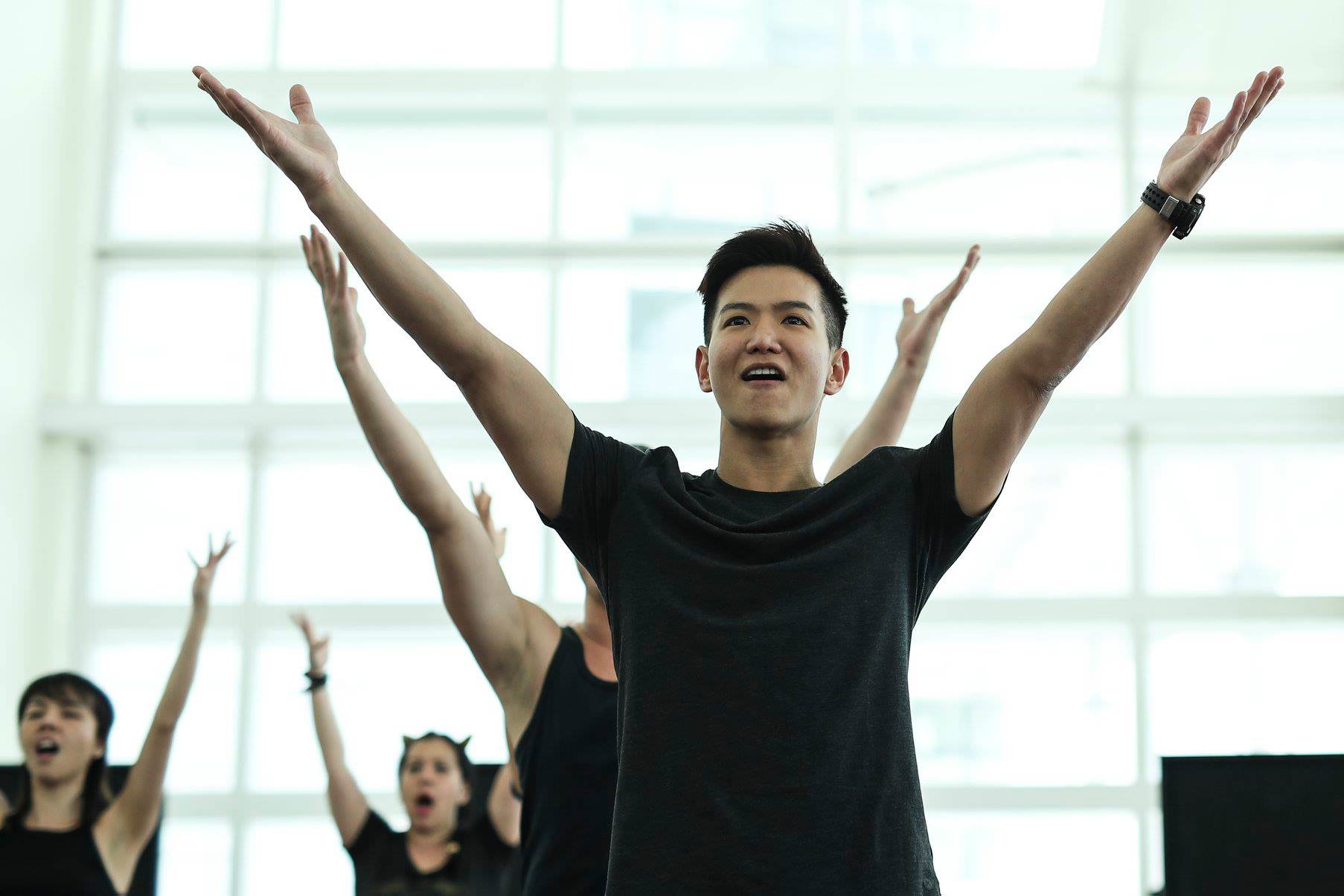 Terence: I play Larry, nephew to SK Loo. To prepare, I meditate for an hour to the Chestnuts roasting on an open fire. Haha!

Larry is a softie at heart and the kind of family you would want, he will never cut people out of his life even though SK Loo has been really mean to him because he is after all family. *cue the awwwwwsssss* 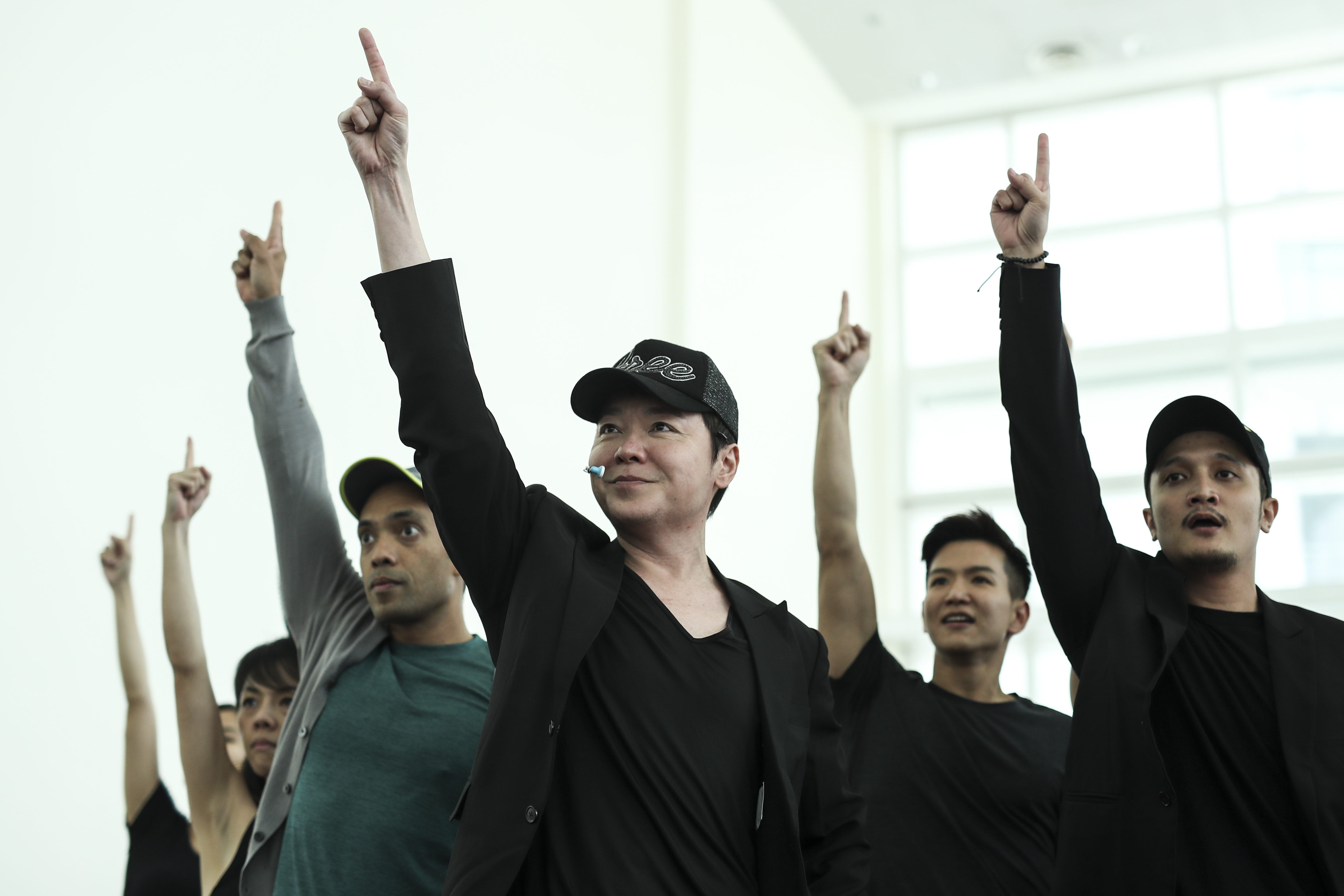 Bakchormeeboy: You’re no stranger to musicals, but this is one of the few times we see you working with Wild Rice. How different is working on A Singapore Carol compared to some of your past experiences?

Terence: I last worked with W!ld Rice in 2009 in Own Time Own Target; who knew it would take nearly 10 years for me and after watching so many of their pantos year after year to finally have the chance to work with them again!

This production has been really fun since day one and it helps that we can bring this fun on to stage instead of having to leave it all backstage ‘coz of all the jolly vibe of this Christmas themed show. Seriously the only time I felt stressed was having to learn the dance choreography!  It also helped that there just so many friends and familiar faces in this production that it feels like we are all just paid to come together to laugh and have fun and it just so happen that there is a show we have to perform!

Terence: Whitney Houston’s Who Would Imagine A King from The Preacher’s Wife soundtrack. Not your typical Christmas carol but listening to it every time immediately gets me into this warm fuzzy feeling with my imaginary hot chocolate by the imaginary fireplace looking at the imaginary snow. 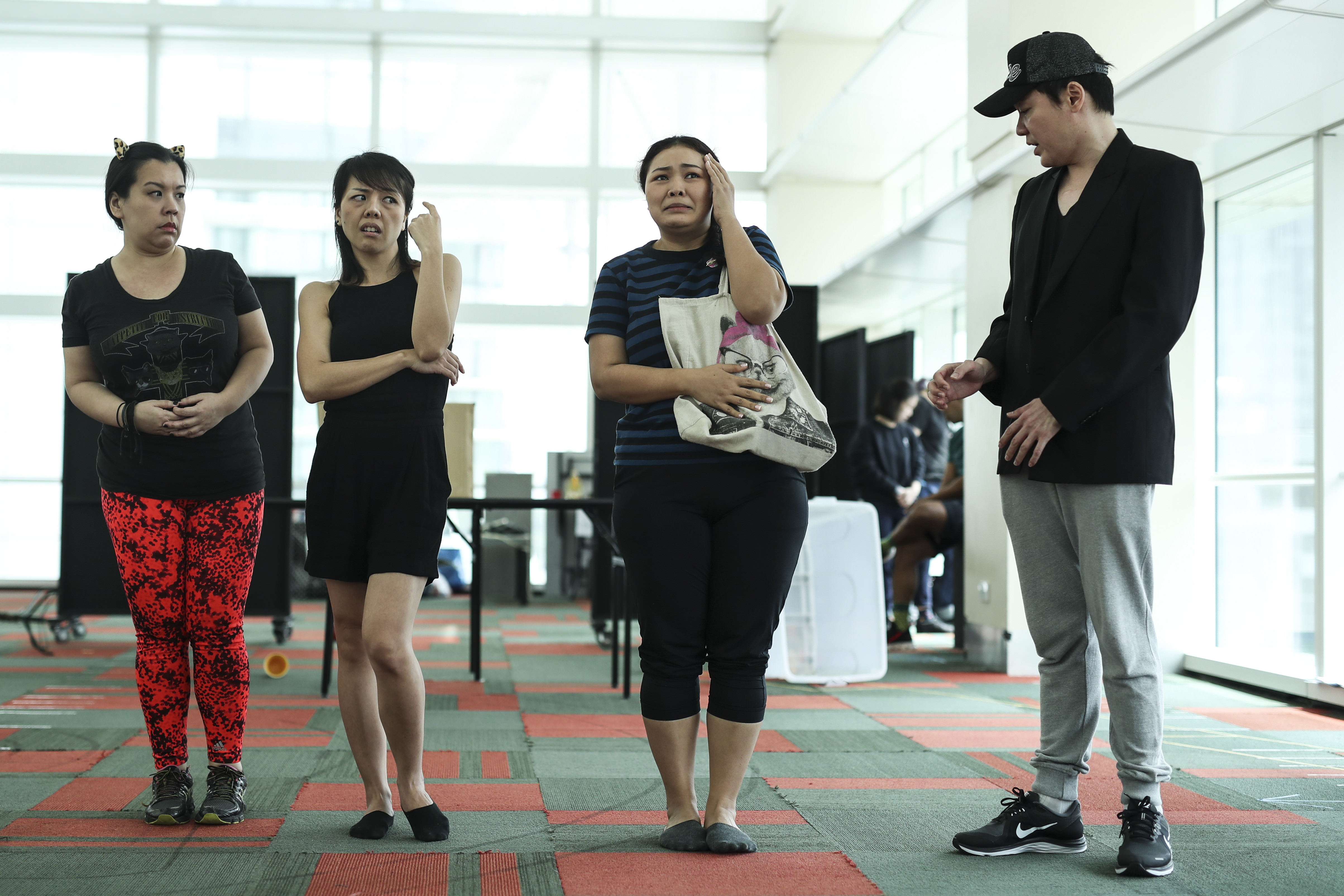 Bakchormeeboy: Tell us about the character you’re playing and how you’ve been preparing for the role.

Siti: I’ll be playing multiple characters. Human and also non-human. The challenge is to make all these characters as different, varied and quirky as possible! 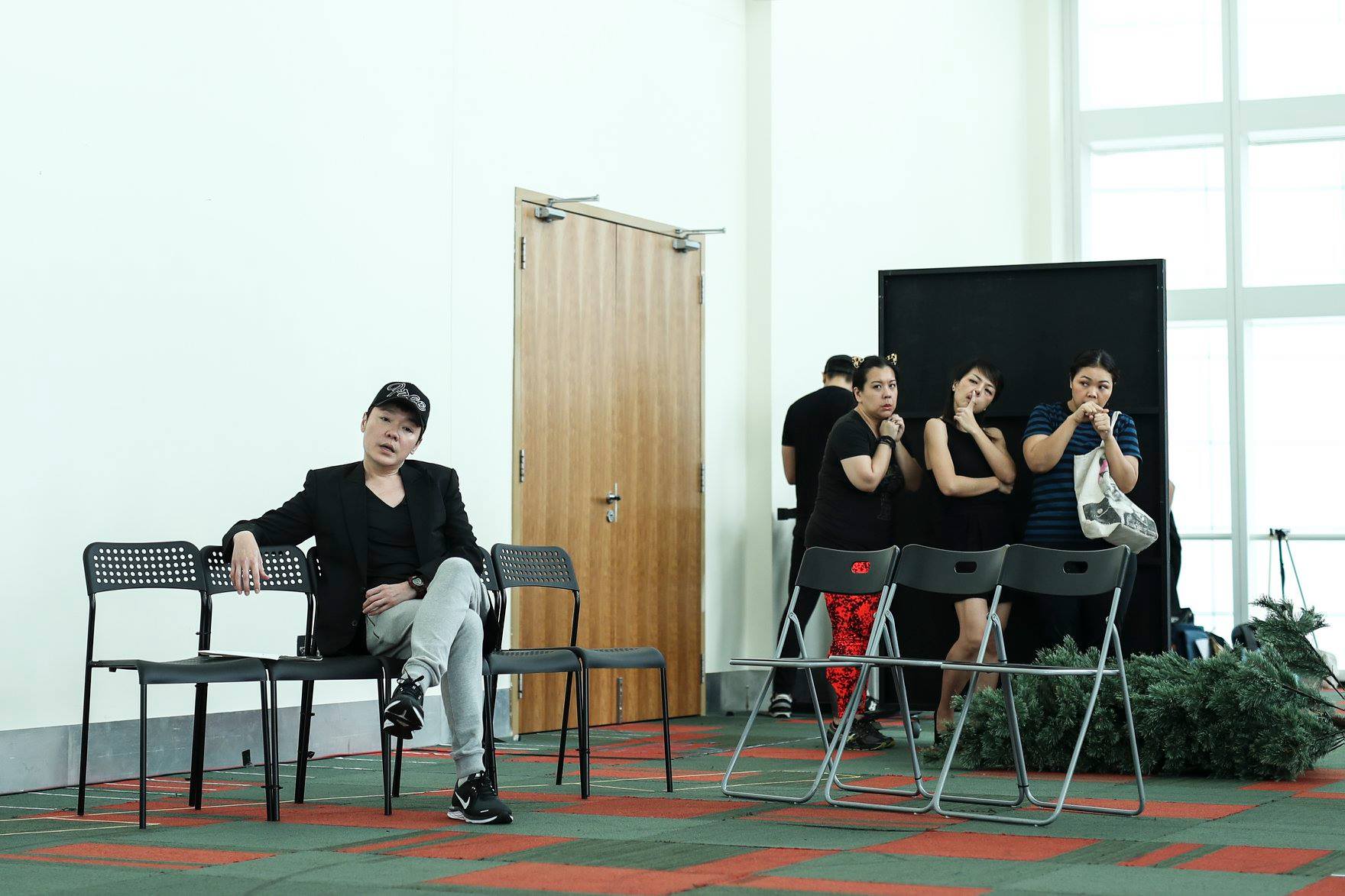 Bakchormeeboy: What’s your idea of a perfect way or place to spend the Christmas holiday?

Siti: In a cosy home surrounded with music, food, friends and family. 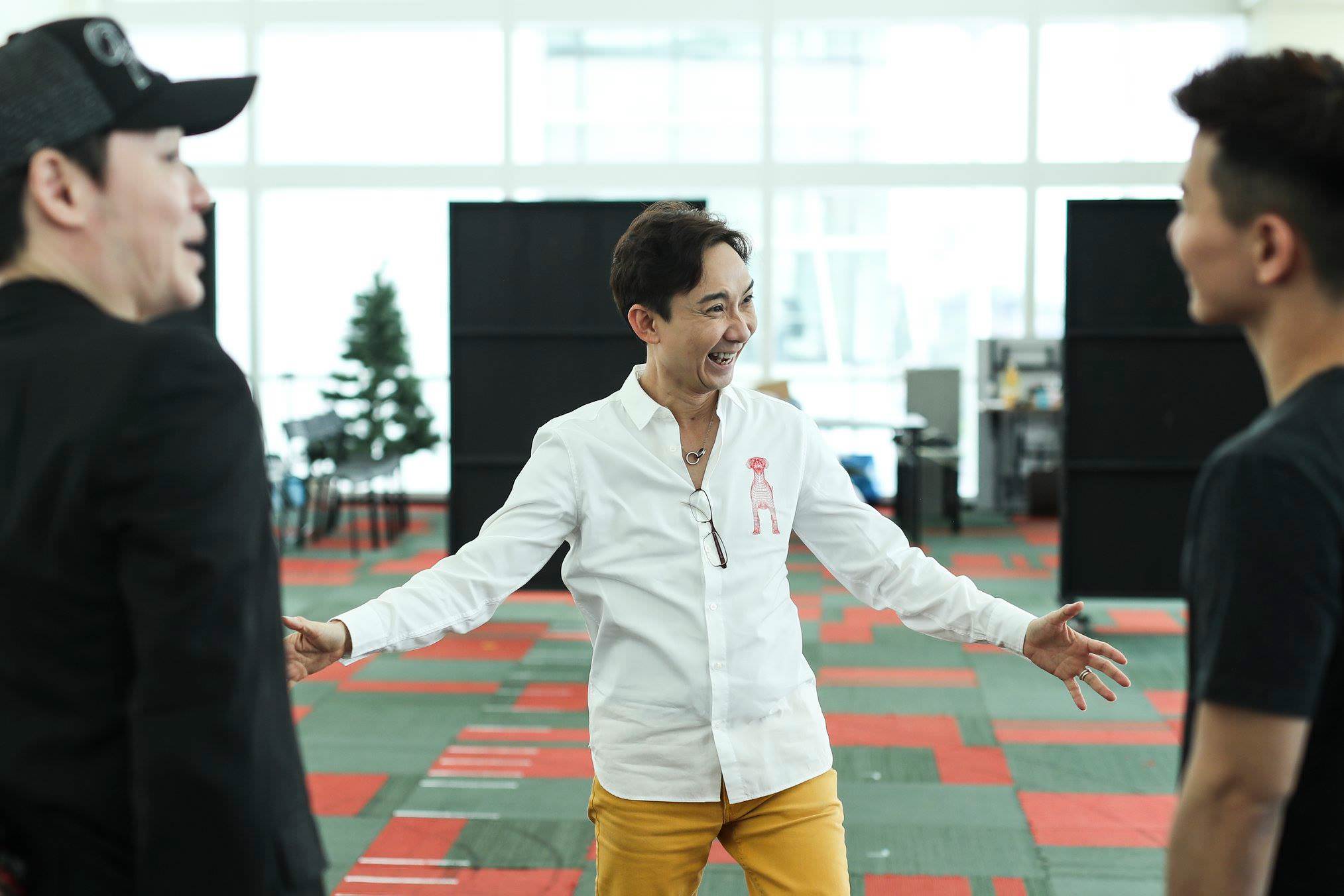 Bakchormeeboy: You’re no stranger to directing W!ld Rice pantos, what would you say characterises your directorial style when it comes to directing musicals?

Hossan: I grew up on a diet of sitcoms and the old musicals like The Sound of Music, Carousel etc… I like my comedy sharp with good timing and a nice serve of corniness on the side. This year, A Singapore Carol has not been an easy piece to take on, because of the subject matter, and because it’s written like a musical. Remember that this is a Christmas PANTOMIME, hence we have had to tweak loads to steer this piece into pantomime territory.

Bakchormeeboy: Why should audiences come to watch A Singapore Carol this season?

Hossan: Because it’s Christmas. And because this world needs to learn that being kind to one another doesn’t cost anything but is worth everything.

Hossan: Have Yourself A Merry Little Christmas

A $ingapore Carol plays at the Victoria Theatre from 23rd November to 15th December 2018. Tickets available from SISTIC

0 comments on “A Very W!ld Rice Christmas: An Interview with Director Hossan Leong and The Cast of A $ingapore Carol”