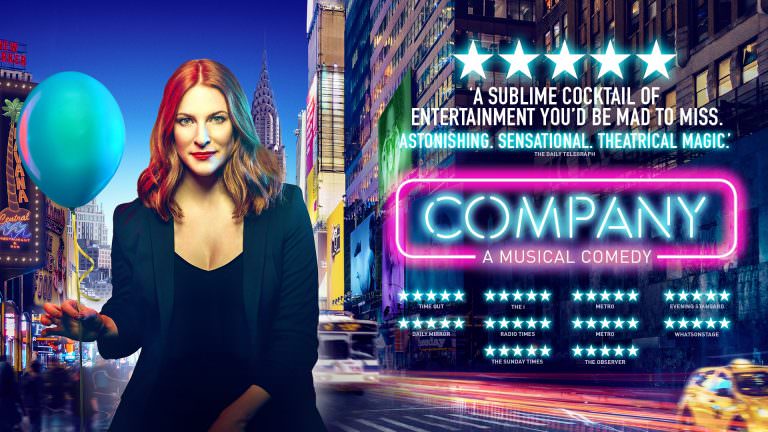 LONDON – Genderbending an established work of theatre certainly isn’t a new thing in this day and age. But with Marianne Elliot’s new version of Company, there’s something excitingly modern about how the newly christened Bobbie breathes new life into Stephen Sondheim and George Furth’s quintessentially New York musical-comedy. 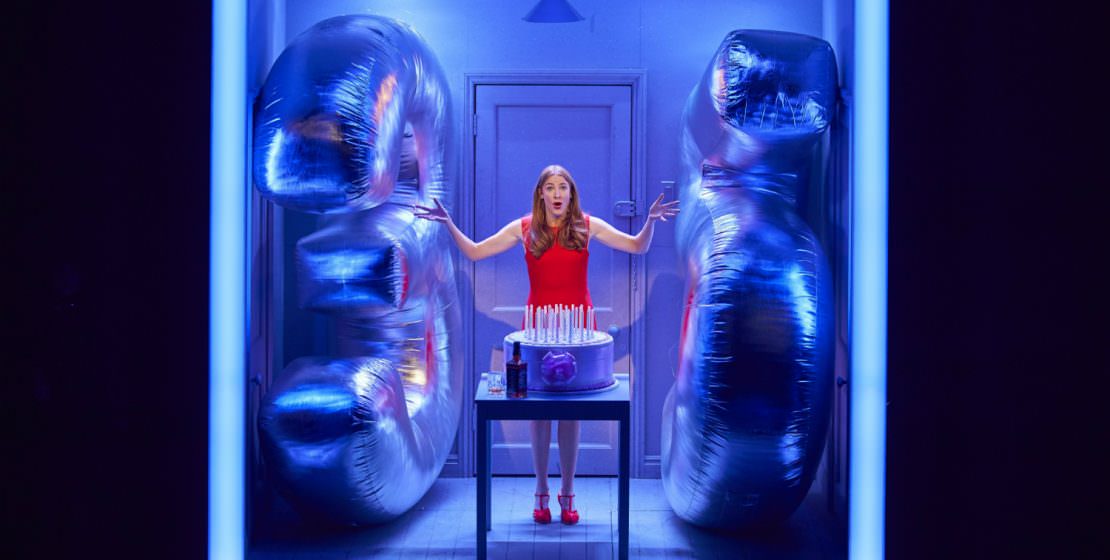 In this production of Company, the musical remains narratively identical to the original 1970 version, following smashingly single Bobbie (Rosalie Craig) as she faces the dreaded 35th birthday party, where her motley crew of married or engaged New Yorker friends begin to question her singlehood and happiness. There’s something refreshingly empowering about seeing Craig onstage as this self-assured, independent woman living alone as she cruises through the fast-paced city-life, infinitely confident in her fiery red dress and heels, yet exuding a genuine warmth and realness from her performance. 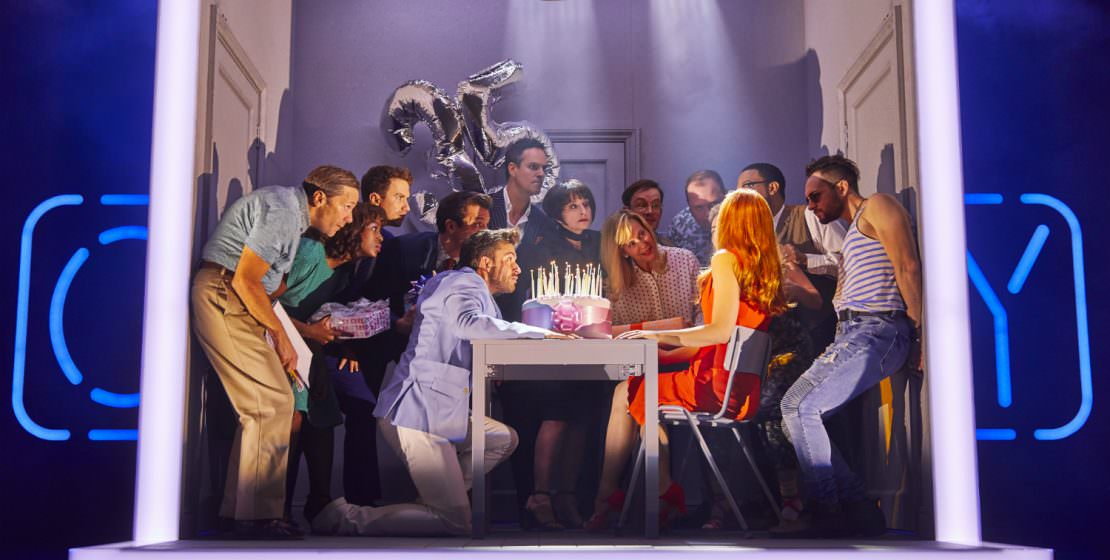 Greeted by Bunny Christie’s neon-fronted set from the very beginning, one is left floored by the almost illusory way parts move about to transform the minuscule New York apartment into a sprawling metropolis, with the Empire State Building itself popping up from a trapdoor to gorgeous terrace view to catch the city skyline from up high on a balcony, transforming the stage completely. As yet another collaboration with Marianne Elliot after their Olivier-Award winning work on National Theatre’s The Curious Incident of the Dog In The Night-Time (which also played at the Gielgud), it’s no surprise that both women are well-versed with the space here, illuminating it and using it to its full potential. Unusually, the orchestra isn’t situated in the pit, but above the stage, allowing the sound to reverberate around the entire theatre, while even the stall seating area is used effectively as the performance opens with cast members milling down the aisles in search of Bobbie. 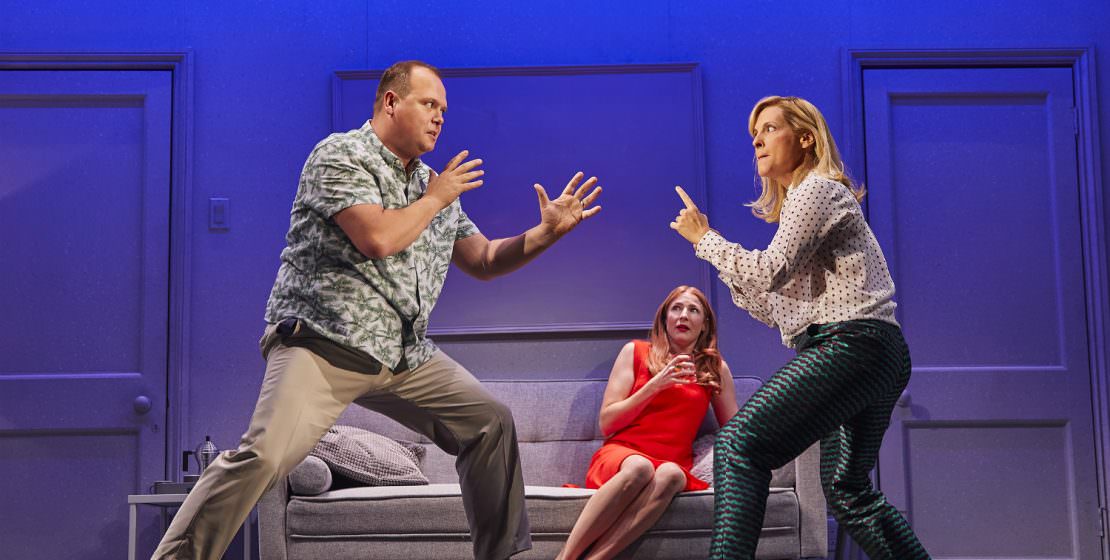 Opening with the familiar “Company”, Craig charms the audience easily while displaying keen chemistry with the ensemble. Choreographed to perfection by Liam Steel, the company does wonders in the tight space they’re squeezed in, achieving a kind of organised chaos that’s irrefutably fascinating to watch. This organised chaos extends to the rest of the musical, as Bobbie explores New York through her friends’ complicated lives, from Harry and Sarah (Gavin Spokes and Mel Giedroyc) keeping secrets from each other to Peter and Susan’s (Ashley Campbell and Daisy Maywood) impending divorce. 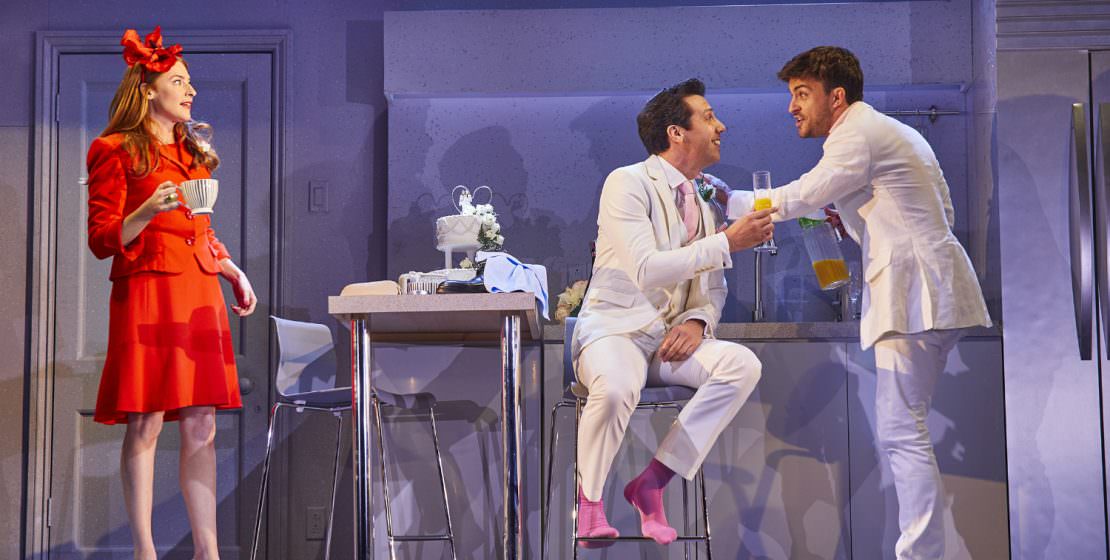 Perhaps most entertainingly, updated for 2018 is a genderbent Amy as Jamie (Jonathan Bailey), now one half of a gay relationship coupled with Paul (Alex Gaumond). The familiar “Getting Married Today” is a welcome number that now brings queer diversity to this otherwise straight play, and the rapid fire way in which Jamie machine-guns his fears of marriage is admirable, every single one of his lyrics articulate and comprehensible, with Bailey displaying a vulnerability to his character that contrasts perfectly with the confidence and strength of Gaumond, making their relationship completely believable. Meanwhile, “Sorry-Grateful”, a soaring, perennially favourite number, works perfectly with the voices of Richard Henders, Ben Lewis and Gavin Spokes, choreographed well. 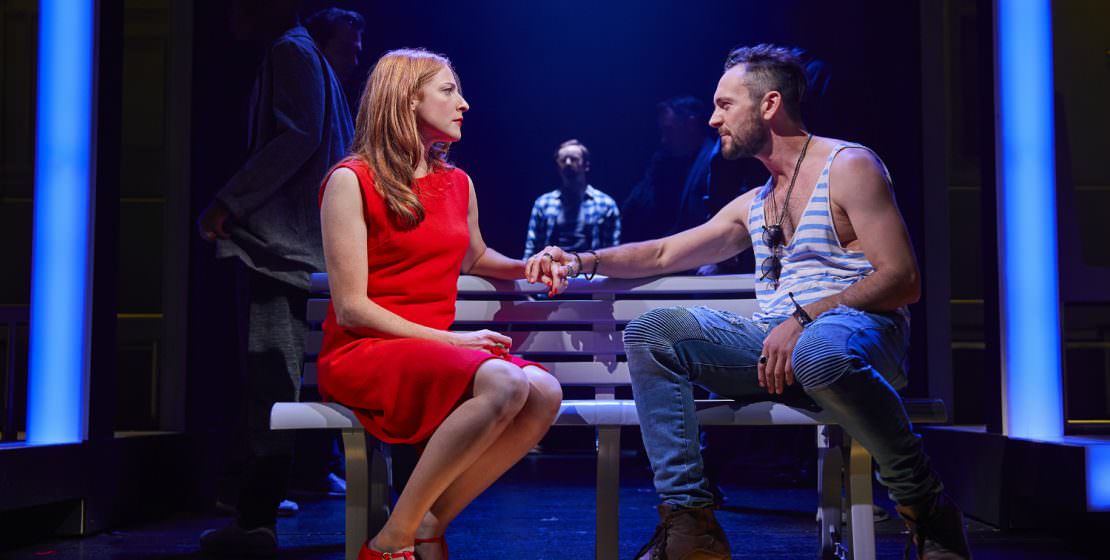 Genderbending Bobbie’s three would-be partners also puts a twist on the usual formula, and places Bobbie in a position of power as a modern woman who can juggle beaus perfectly, well introduced in “You Could Drive A Person Crazy”, no longer shrill and hysterical but fervently panicked in their baritone voices. Each of the three men are adept performers, and PJ (formerly Marta, played by George Blagden), does a particularly splendid job at the arresting “Another Hundred People”, with fantastic enunciation to the point he is nearly rapping, yet every lyric clear and every movement dazzling. 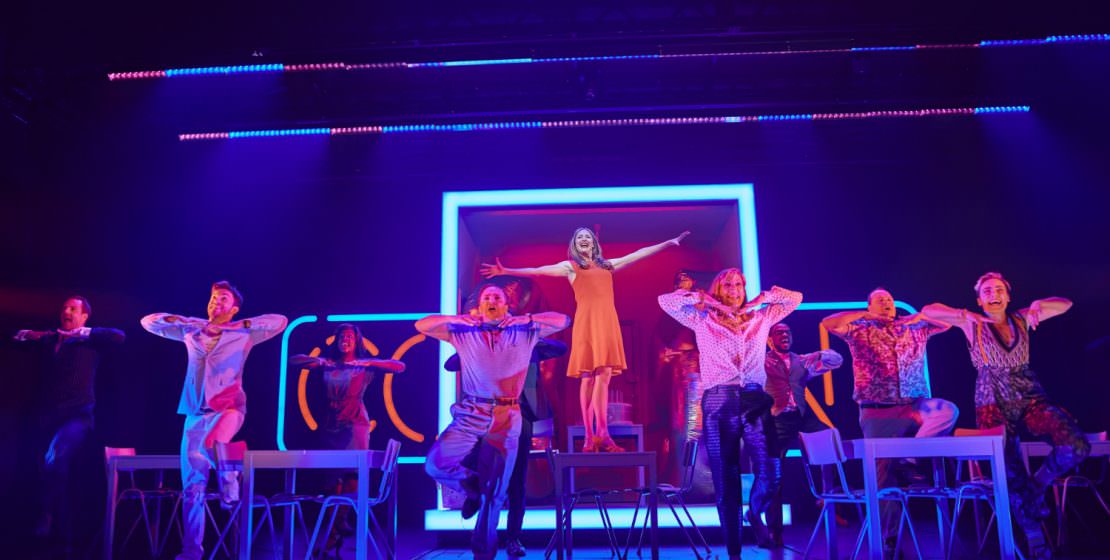 Even as Craig ends off Act 1 with a showstopping rendition of “Marry Me A Little”, Act 2 loses no steam at all with a repeat of the birthday scene, the high energy “Side by Side by Side” proving a high energy opening number that showcases the ensemble’s efforts put into rehearsals as they slide and dance about the stage. 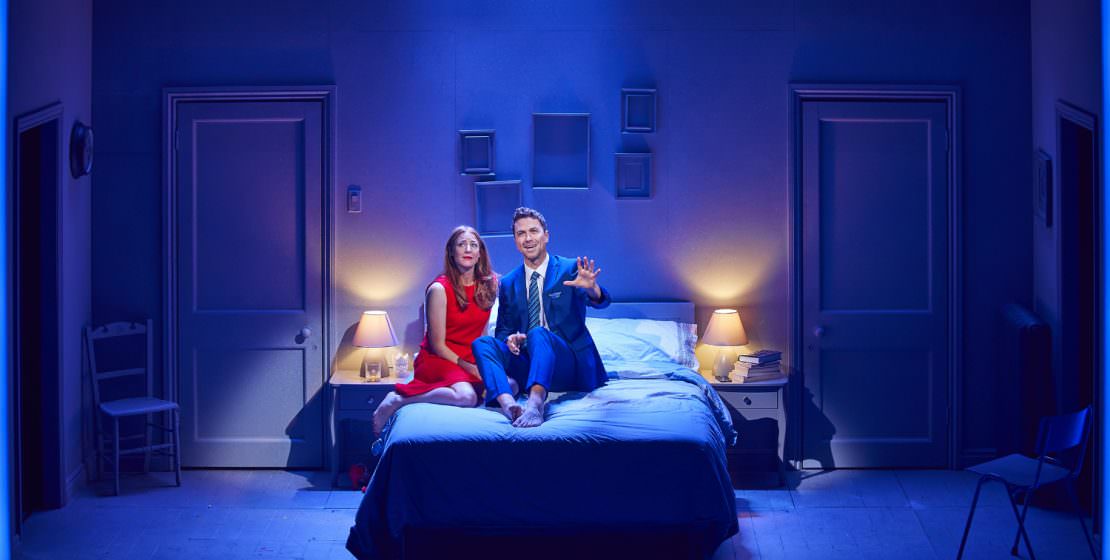 As we rapidly shift to Bobbie’s apartment and bedroom, pre-empting an inspired sex scene between her and flight attendant Andy (Richard Fleeshman), members of the ensemble play out a What If? Bobbie and Andy get married, showcasing the existential dread of marriage as they run through the initial happiness that quickly turns to fear and loathing as ‘Bobbie’ gets pregnant and the love that once was falls apart quickly. Yet, Fleeshman shows off a sweetness to his character in “Barcelona”, choosing to sleep in with Bobbie and forego his flight to the Spanish city of the same name. 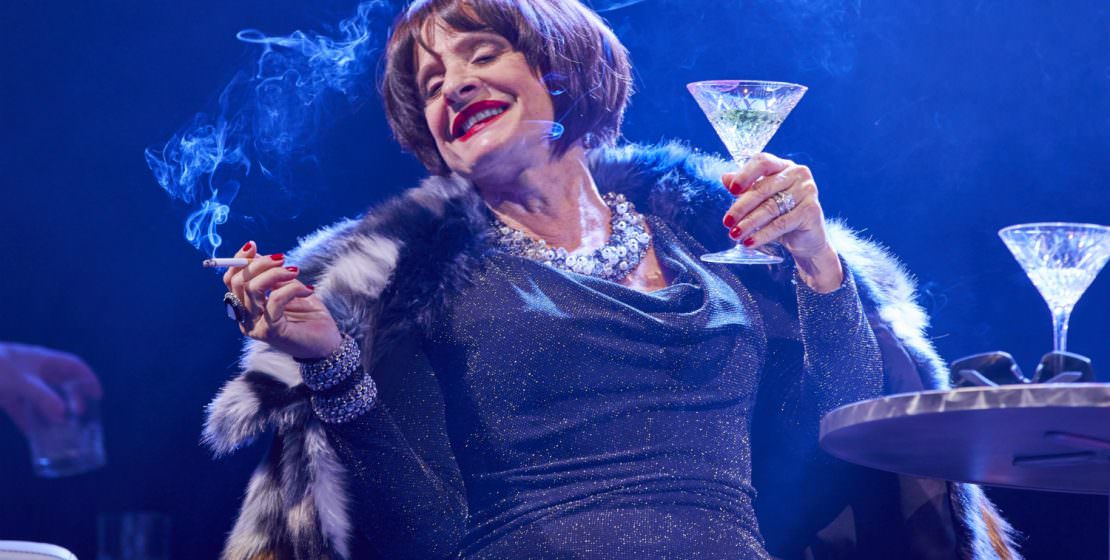 Of course, one of the biggest draws of this production of Company would be Patti LuPone, who brings Broadway star power and her legendary vocals to the stage. Each time she steps onstage as Joanne, she delivers a performance to savour, from her introduction in “The Little Things You Do Together” as she displays an almost effortless rendition, while in the second act “The Ladies Who Lunch”, LuPone steals the show with her crisp, awe-inspiring voice and performance. 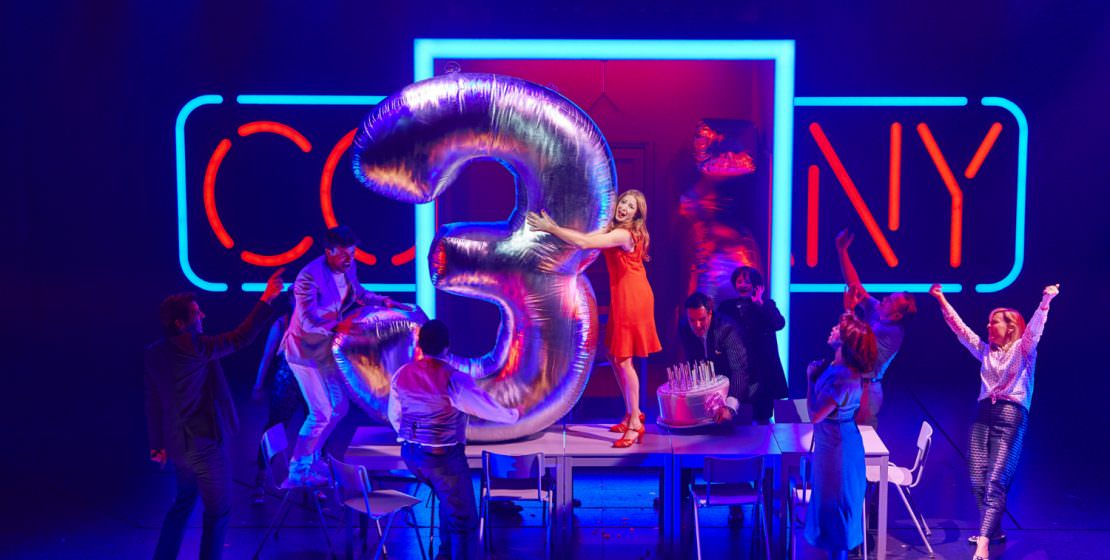 As Bobbie finishes off with a proud rendition of “Being Alive”, bringing out her vulnerability and fears of the trappings of marriage, one feels a strength grow within her as she mentally overcomes it, segueing nicely into “Finale Ultimo (Company)”, as we return to the birthday once again, Bobbie nowhere to be found. As her friends leave, Bobbie emerges from hiding, and clutching a fire extinguisher, confidently puts out 34 of the 35 candles on her cake, before cheekily, slyly blowing out the last one, embracing her mid-thirties boldly as the lights black out. This genderbent Company layers the original with a relevance that, regardless of age, imbuing audiences with a confidence and verve for life that makes for a delightful night out on the town in the company of friends.

Company plays at the Gielgud Theatre, London till 30th March 2019. For tickets and more information, visit their website here

0 comments on “In London’s West End 2018: Company at the Gielgud Theatre (Review)”