Does school prepare students for the real world? While the academic syllabus certainly may not always apply to the working adult, the students featured in Hong Kong Repertory Theatre’s (HKRep) Principle certainly learn more than their fair share of life lessons that feel more relevant than ever in these turbulent times. 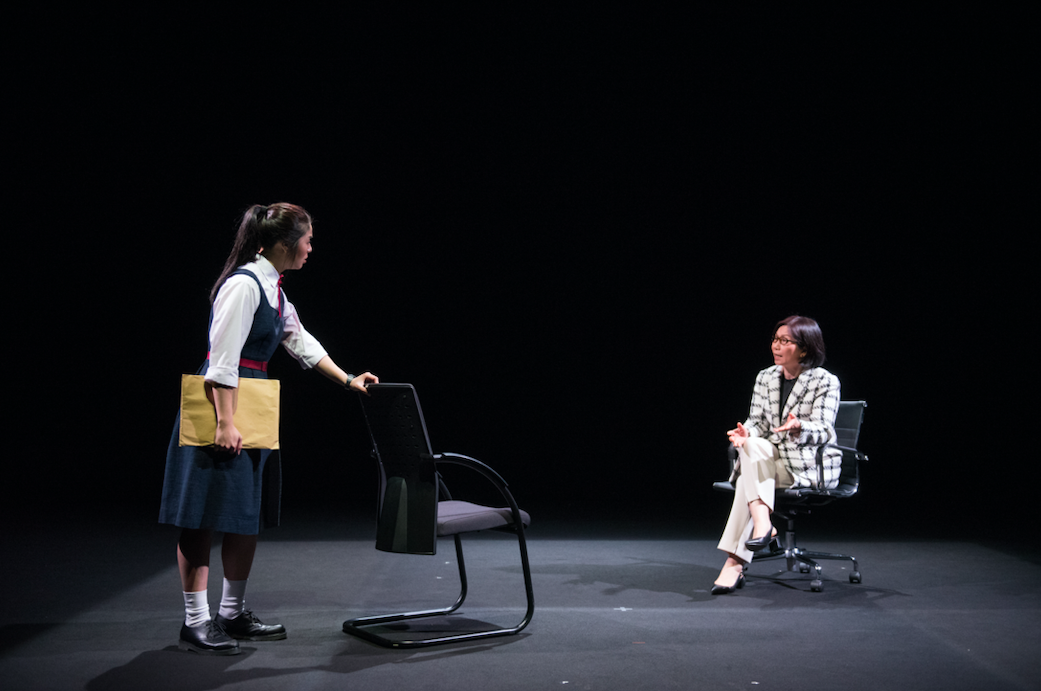 Written by Kwok Wing Hong and directed by Fong Chun Kit, Principle follows a series of events that take place after Ling Chi (Lui Si Lan) joins a high school as their brand new principal. Immediately establishing her authority by enforcing a brand new set of rules pertaining to attire and behaviour (something any Singaporean student would be familiar with), she quickly garners the ire of the student body. 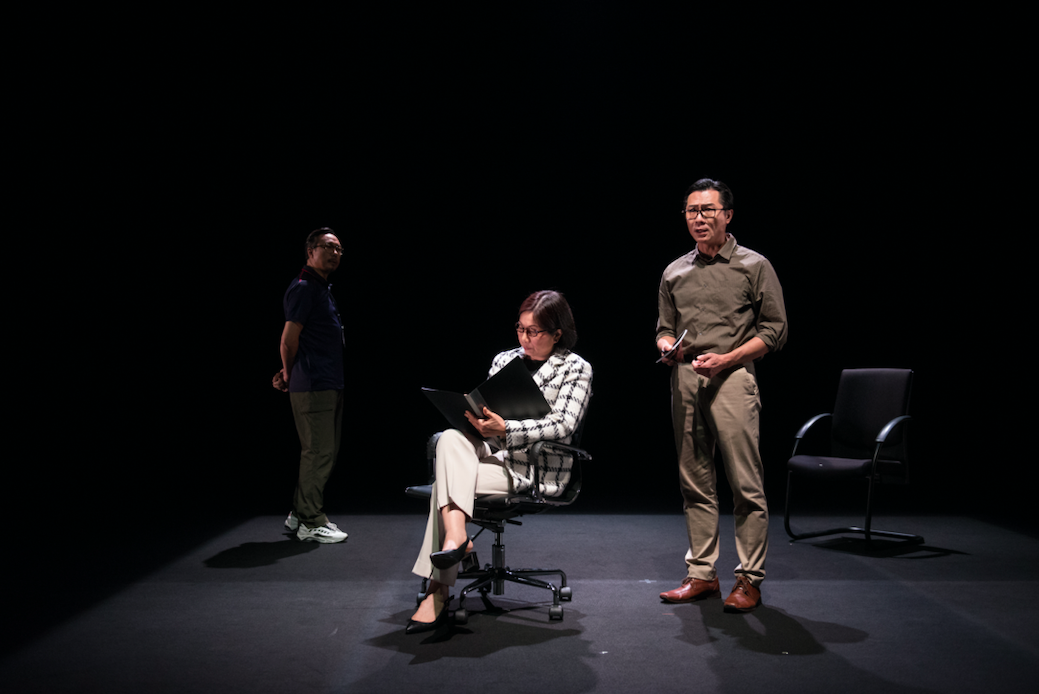 Standing in stark contrast to her is the long-serving vice-principal of the school, Chan Yin (Ko Hon Man), who instead advocates a more libertarian approach in his leadership, allowing more freedom of expression and little need for punishment. Their growing tensions come to a head as an incident on campus escalates into a student strike, and both principal and vice-principal are forced to decide: who will stay and who will go? 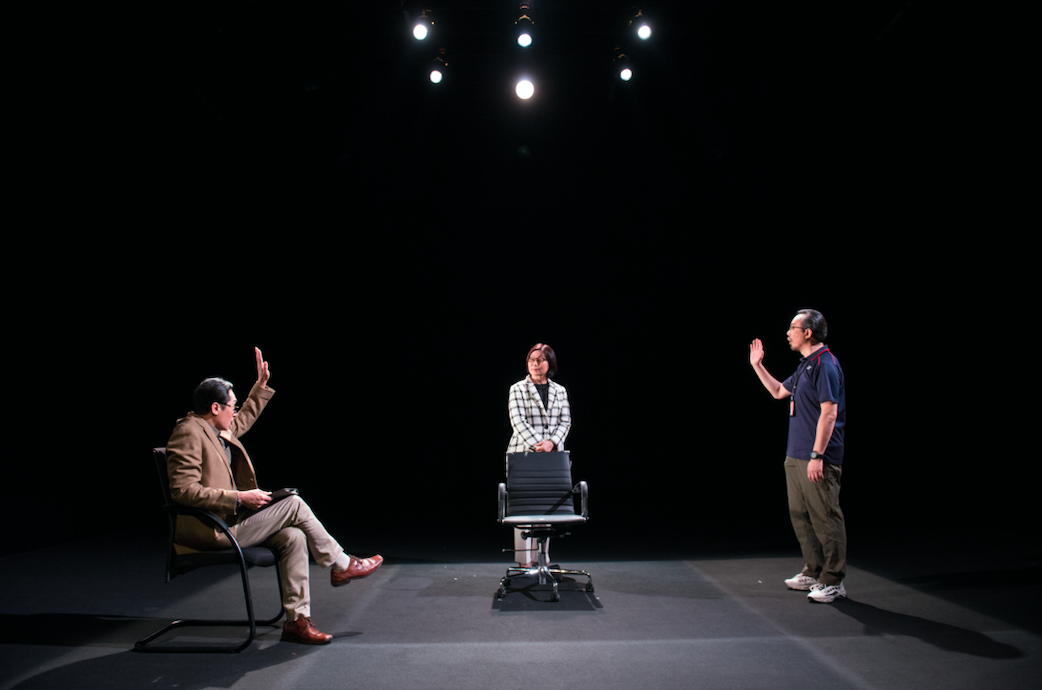 From the moment Ling Chi and Chan Yin first meet, the differences between them are clear to see; Ling is dressed in a checkered blazer and no-nonsense white pants, while Chan dons a navy polo top, loose pants and sports shoes. Kwok Wing Hong’s dialogue-rich script is snappy and naturalistic; when they speak, Ling’s commanding tone also comes rife with references to Western literature, and against Chan’s casual, relaxed tone, further shows the divide between the two, as separate as yin and yang. While Principle adopts an almost completely bare set, both Lui Si Lan and Ko Hon Man are incredibly capable actors, and are able to capture our interest and attention with their strong presence each time they appear onstage. 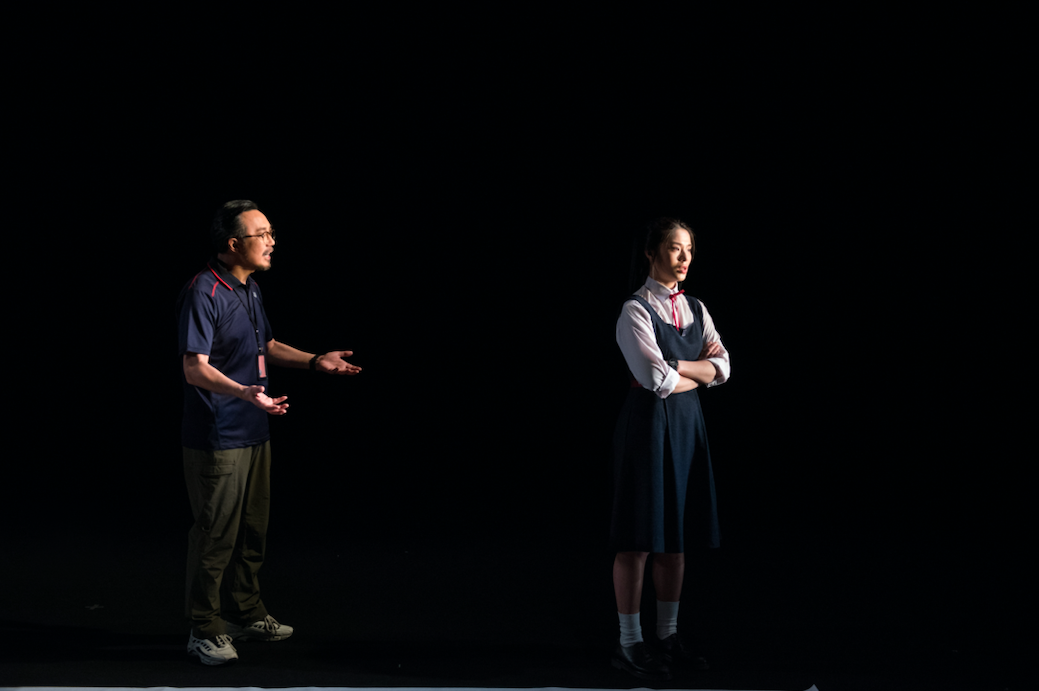 With such strong personalities from both top dogs of the institution, what initially begins as a simple rivalry and mutual distrust of each other erupts into a schoolwide kerfuffle when vice-principal Chan faces a transfer to another school after a student gets into an accident on campus. Thinking that principal Ling is behind the transfer and taking advantage of the situation to oust her opponent, the student body rallies to defend their beloved vice-principal, and organises strikes, protests and more in an attempt to destabilise the system and fight for him to stay. Student union leader Fu Pui Ching (Wong Suet Ip), for example, who is vice-principal Chan’s biggest supporter, prepares giant banners in protest while plotting to bring down principal Ling. The silence over the incident only further adds to the confusion amongst the student body, and it’s not long before even the Hong Kong media step in to report on the commotion. 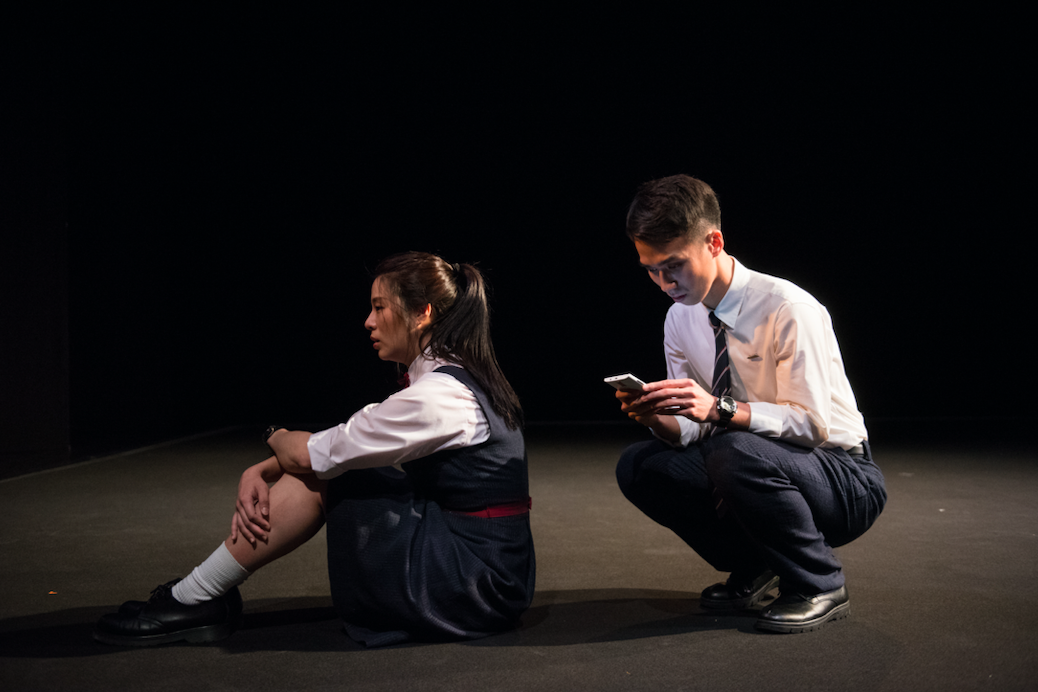 The beauty of Principle lies in how varied the responses are to the incident as it continues to unfold. Chinese teacher Choi Lam (Chris Sun), for example, provides good comic relief as he clearly shows his sneering distaste for principal Ling while driving the plot forward as he secretly goads the students to go on strike. Meanwhile, head prefect Leung Kin Pok (Poon Tai Ming) chooses to stand on neither side of the conflict, and instead attempts to get to the bottom of the whole affair with his own investigations. A crisis evidently involves more than just two parties on either side, with the disorganised students forming their own hypotheses about the situation, acting independently and forming shifty alliances to further their own goals. With students Fu and Leung, we understand how when even innocents are caught up in conflicts that affect the running of an institution, there is no choice but to take a stand and act, and fight for what one believes in. 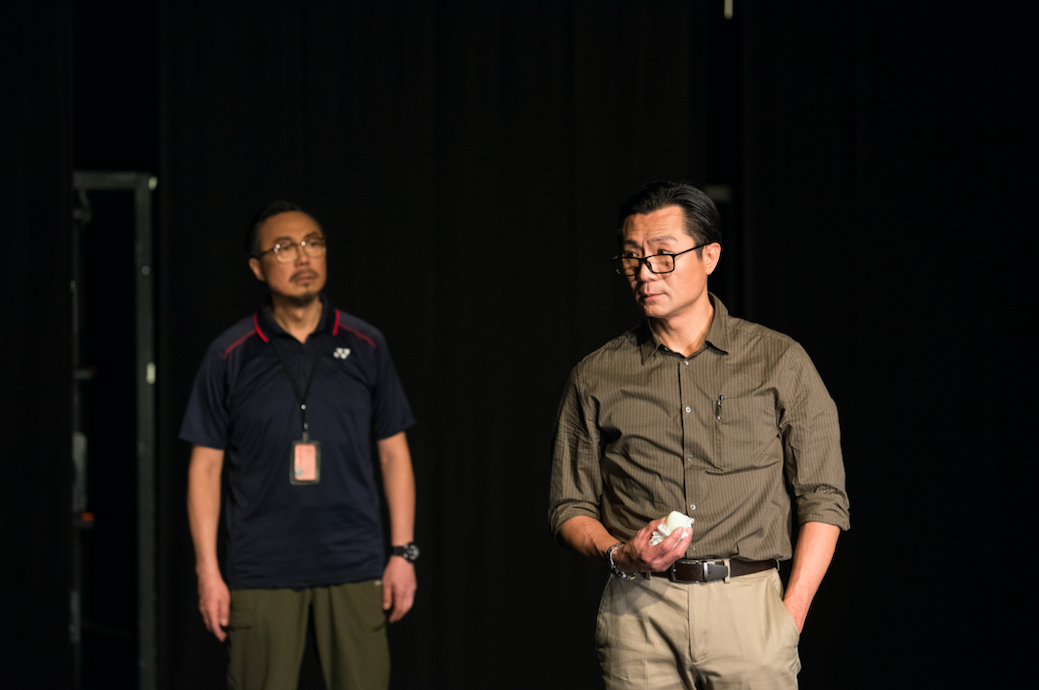 In response to the student backlash, the crux of the performance then turns back to discussions between principal Ling and vice-principal Chan, as they debate between themselves on the best course of action to proceed with. With each of them explaining their leadership philosophy to the other, it is remarkable how despite our alliances clearly skewed towards vice-principal Chan, there are moments even principal Ling makes logical sense with her authoritarian principles and draconian laws, and there is no one person who is completely right or wrong. We see the merits of both characters, and understand the burden of leadership placed upon each of them to take responsibility for their actions, and how easily their words or silence can be misconstrued amidst the uncertainty of the entire situation. 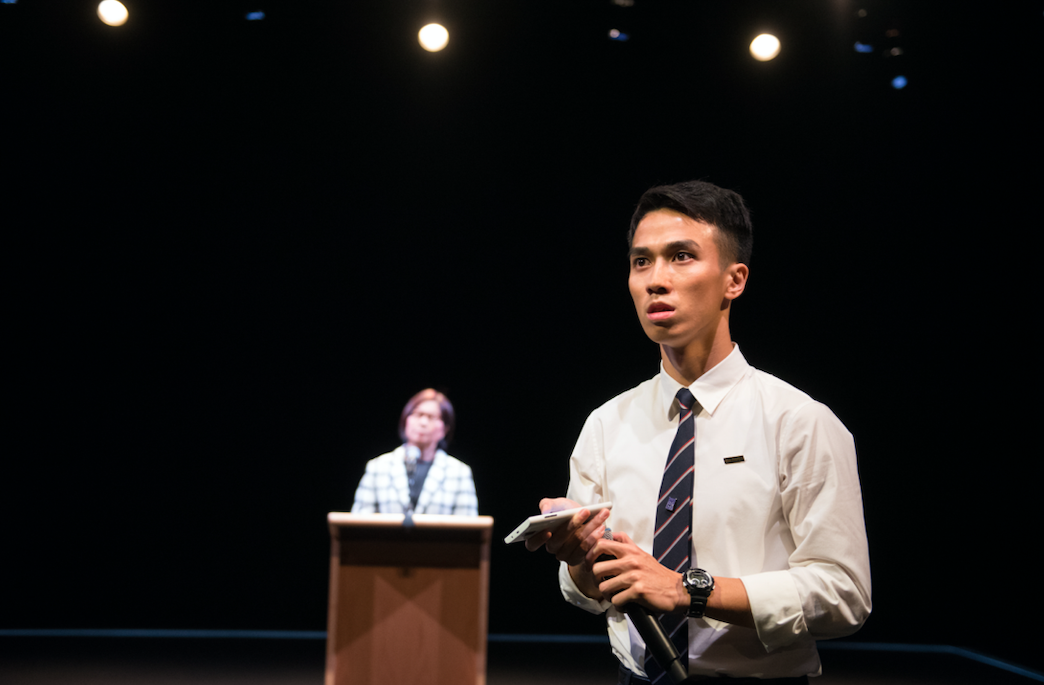 All of these strains eventually build up towards a powerful climax, as the audience finds ourselves in the middle of the final hearing for the incident. Even at this point, Principle manages to still surprise us with new information revealed and keeps us guessing throughout how our heroes’ fates will unfold. Bittersweet as the ending is, it’s an appropriate one, leaving us with the hope and knowledge that eventually, all fights must come to a conclusion, requiring compromise on both parts to resolve properly. 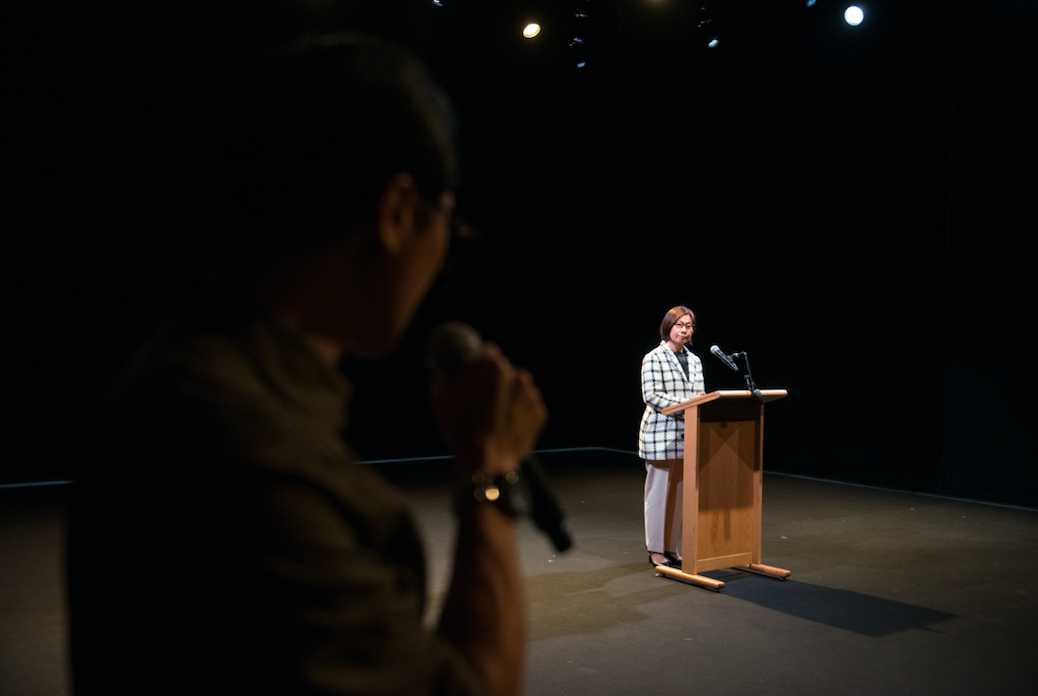 Principle is a powerhouse production that manages to encompass a myriad of ideas and issues from personal philosophies to the fallibility of authority, all while maintaining a delicate balance between capturing the idealism of youth against the darker realities of adulthood. ‘Education is politics’, the play explicitly states at one point, and in the face of a commotion as large as the one encountered in Principle, there are life lessons aplenty for both students and school staff, as they discover the consequences of holding on to one’s principles (or principals) – and the value of learning to let go. 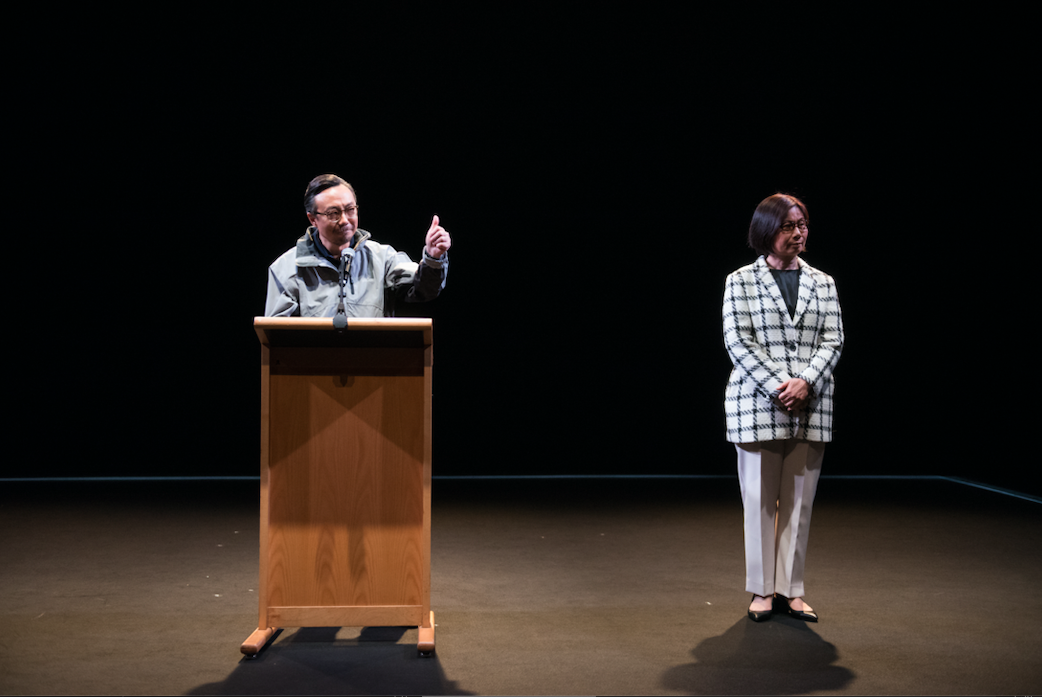 Photos by Jack Yam, courtesy of Esplanade – Theatres on the Bay

Principle played from 31st January to 2nd February 2020 at the Esplanade Theatre Studio as part of Huayi Festival 2020.