The Theatre Practice unearths the hidden stories of Waterloo Street in a stellar promenade theatre experience founded on research and made with heart.

Among The Theatre Practice’s many productions, it is undoubtedly Four Horse Road that stands out as one of its most ambitious ones yet. First staged in 2018, this run marked the second iteration of the show, featuring new scenes, and once again helmed by director Kuo Jian Hong and playwright Jonathan Lim. 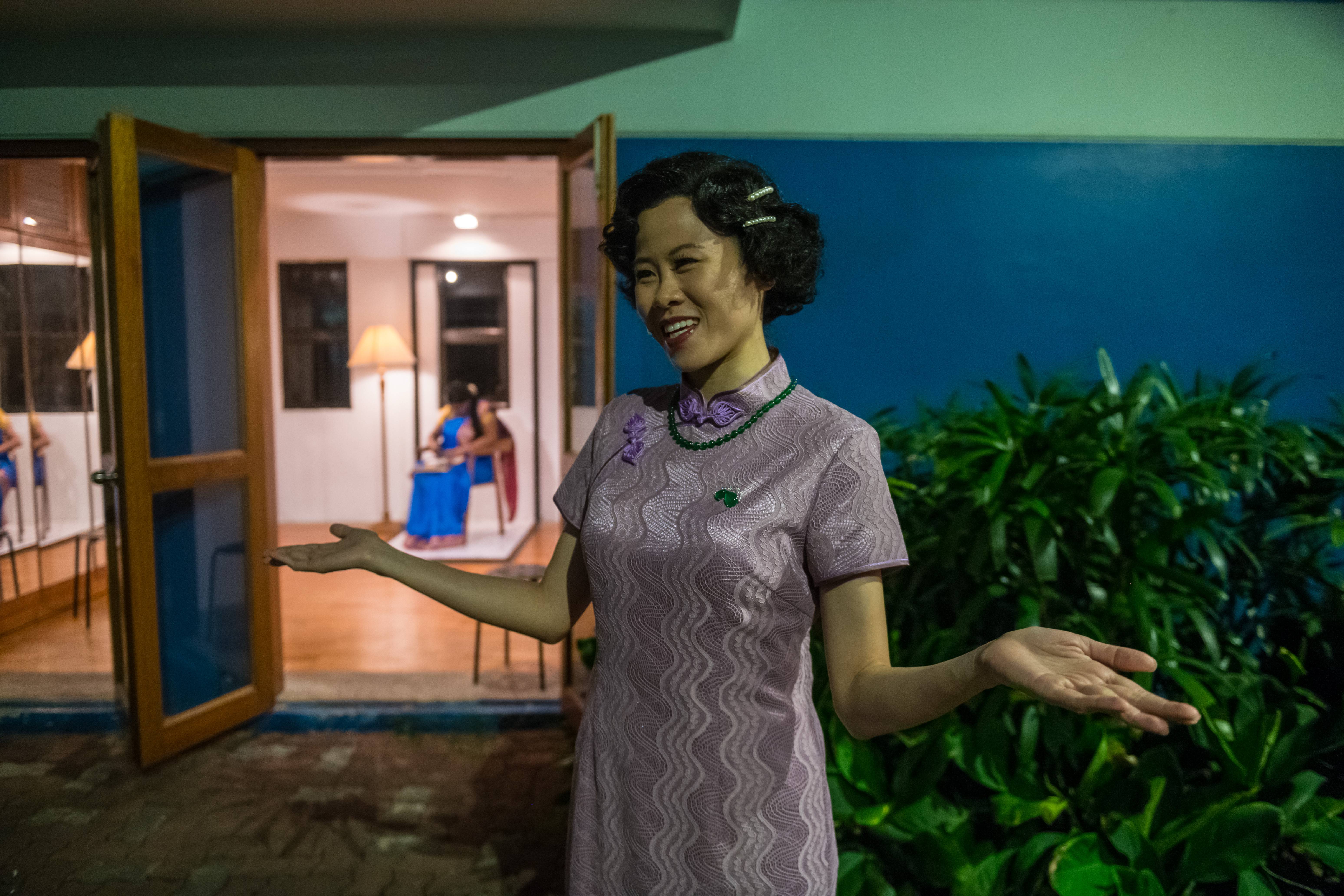 Exploring over 150 years of Waterloo Street’s history, Four Horse Road unearths and dramatises the unspoken stories of the district. Thoroughly researched, well directed and powerfully written, the promenade theatre experience often feels like a well-oiled machine of a production. Director Jian Hong leads a team of over 50 cast and crew working tirelessly to take audience members on a ‘journey through time’ as they are guided through The Theatre Practice and Centre 42, helped by Petrina Dawn Tan sets and MAX.TAN’s detailed costumes. 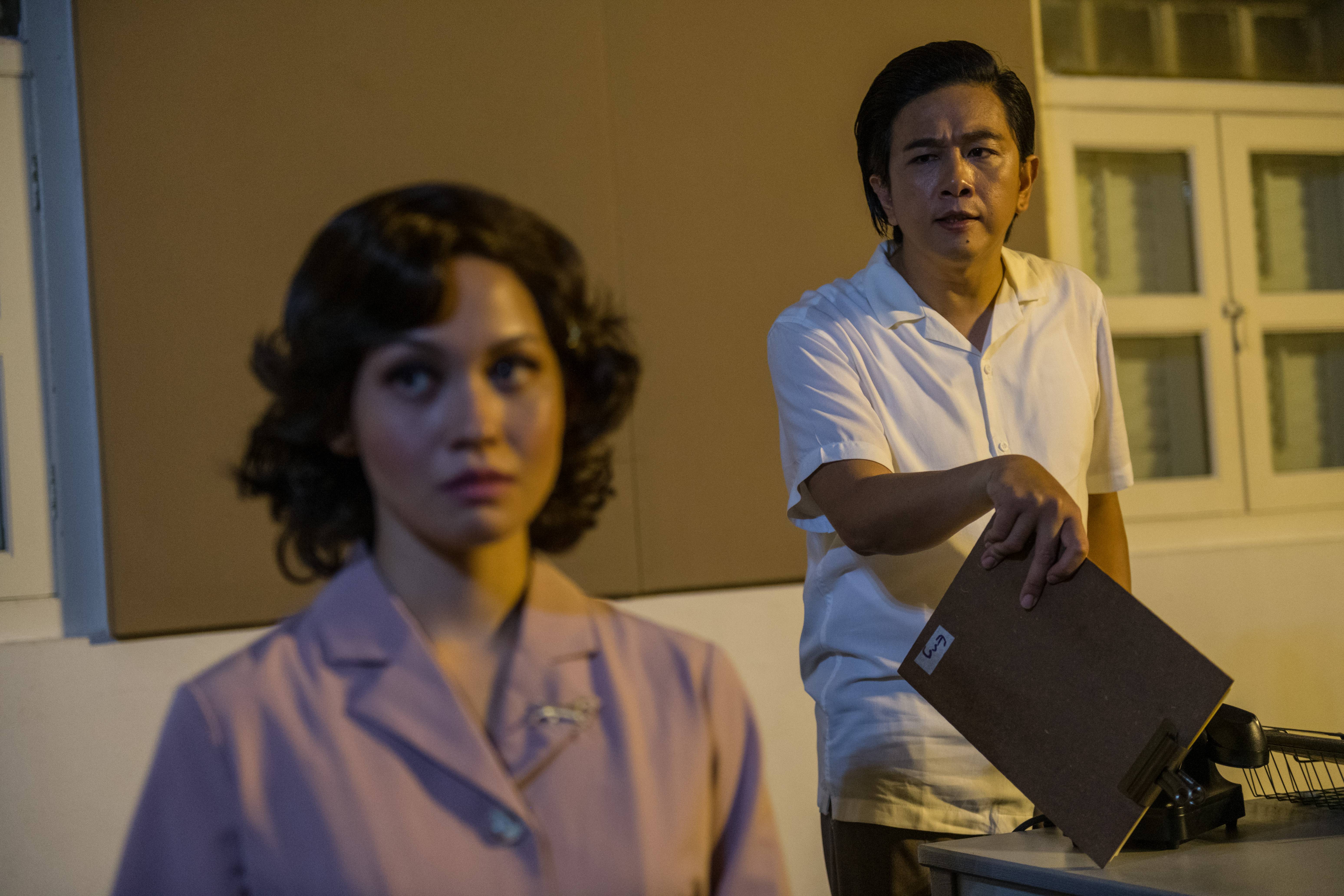 The audience is split into various groups, and at any one point of time, multiple scenes are happening simultaneously, and it takes immense planning and complete coordination between all of its moving parts to become the single, seamless experience. With lightboxes displaying the year each scene is taking place in, it often feels like we’re hurtling through time itself as we weave our way through this ‘living museum’ of stories and undeniable proof of our uniquely intercultural society through the ages. 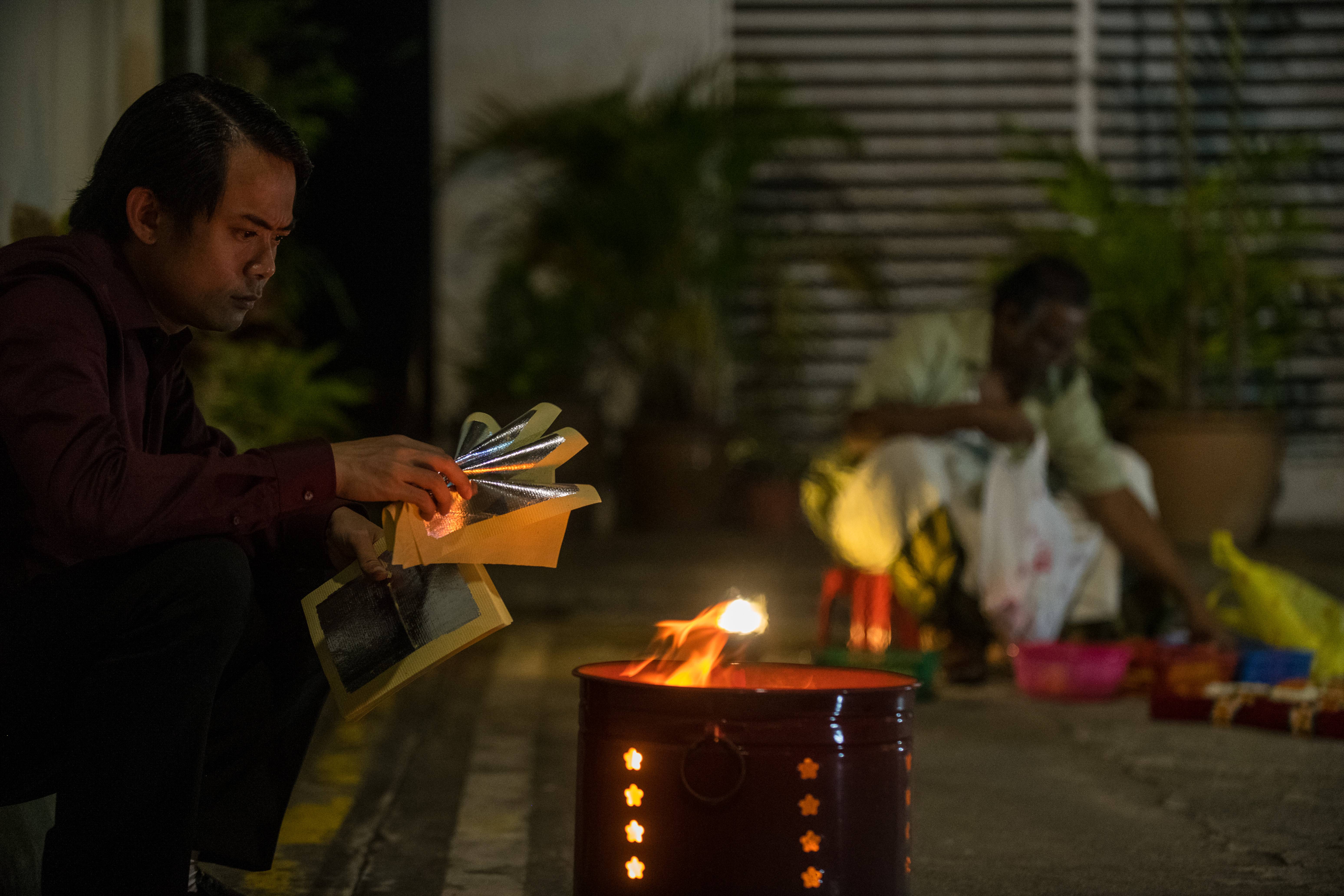 No other theatre company seems more suited to put up this production than The Theatre Practice, whose home is located in the middle of Waterloo Street itself. Due to the ongoing COVID-19 situation in Singapore and the world, when we arrived, front of house staff were already fully set up to make sure audiences were well-taken care of, conducting all necessary health checks, from temperature screening to sanitizing our hands. Those with large bags were asked to stow them away in lockers provided. As we sat down, we were assigned, small coloured bags to indicate our groups, and to seal our phones and loose items in, so that we could focus on the performance without distractions. While we waited, The Theatre Practice even showed a ‘safety video’, giving us clear instructions on how best to enjoy this experience, and built anticipation for what was to come. 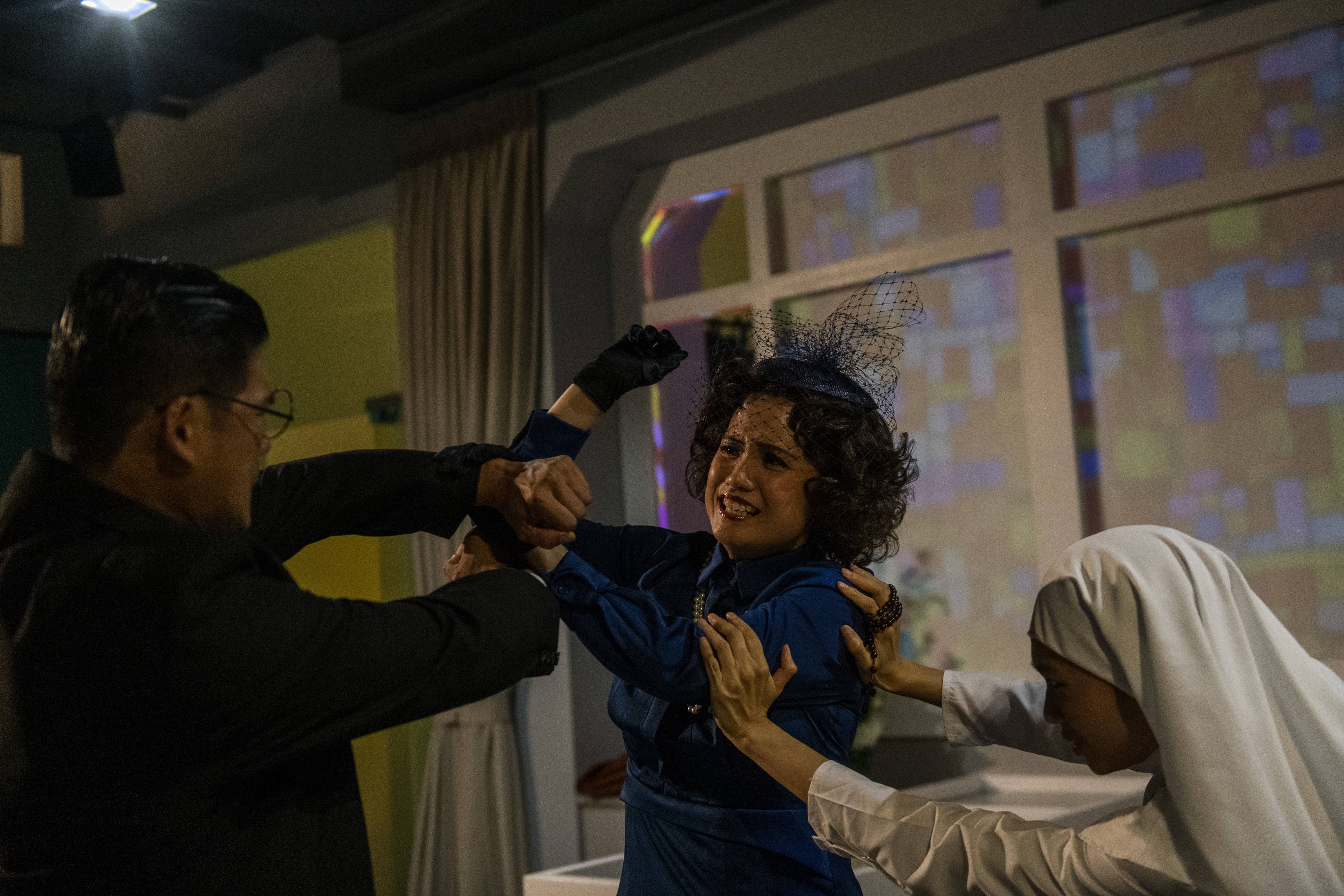 One of Four Horse Road’s biggest merits is how it managed to put us in the right frame of mind each time we stepped into a new space, thanks to Sandra Tay’s sound design and Genevieve Peck’s lighting. As we entered the first space, we immediately recognized the ambient sounds of Waterloo Street. Windchimes of Chinese temples, trumpets from Hindu temples, and chanting from Jewish synagogues put us in a meditative state of mind, before we were jolted out of our reverie by the cry of ‘yamseng!’ from a Chinese restaurant, and familiar getai numbers. This clash of cultures was indicative of Waterloo Street’s rich cultural diversity, with people from all backgrounds having called this their home for over a century, and one of the strongest themes running throughout Four Horse Road. 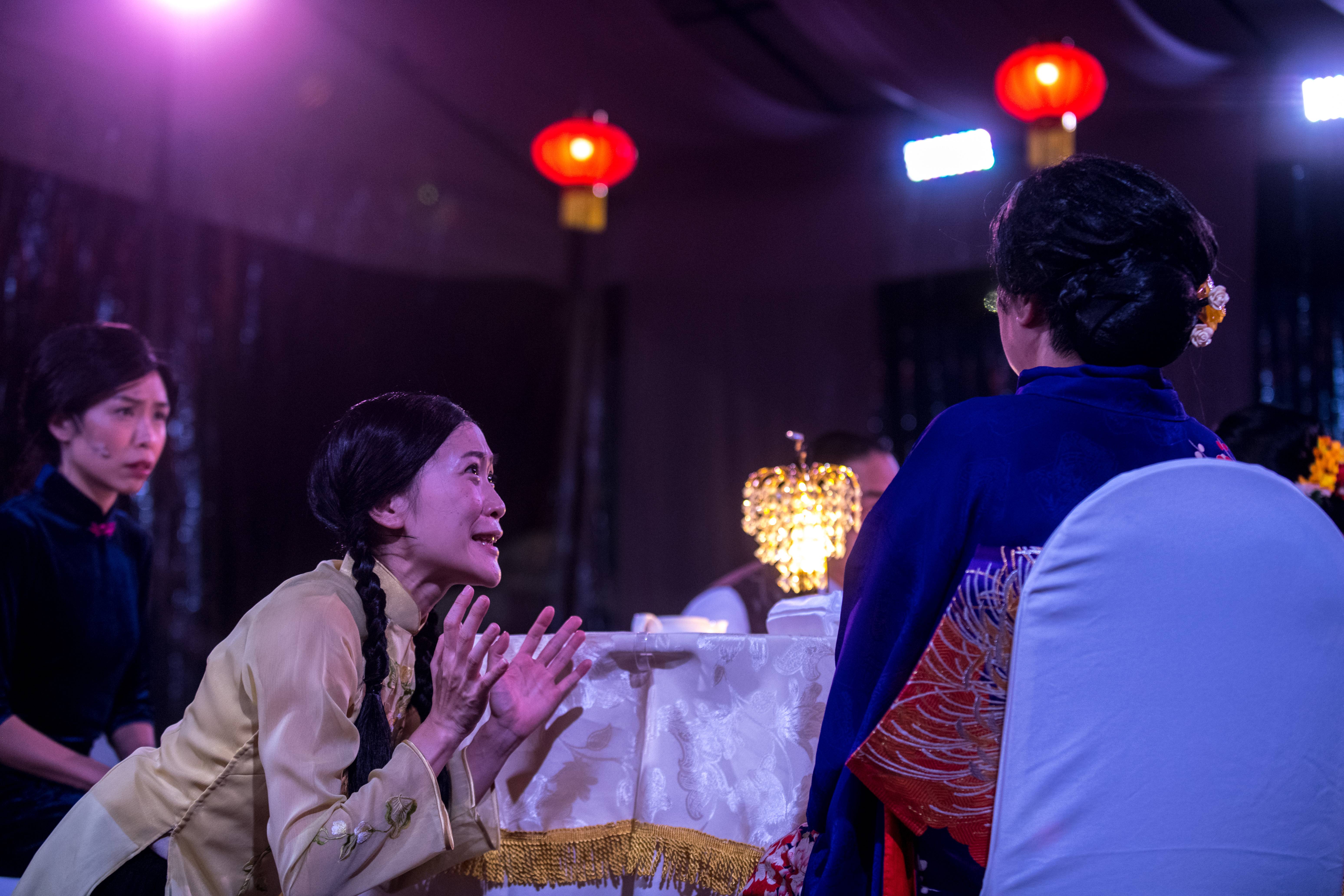 Housed in a ‘quarantine centre’ (a relevant context to reflect the current situation), we were informed that we’d be watching old-school films, appropriately screened on a large patchwork of white sarongs reminiscent of old outdoor screenings. We were then presented with a series of well-made ‘trailers’ (by EDIT&PLAY), each one styled to resemble films from the past, creating an immediate sense of nostalgia thanks to the vintage editing and style adopted in each ‘trailer’. As smoke engulfed us, we were led to safety with the aid of our guides. 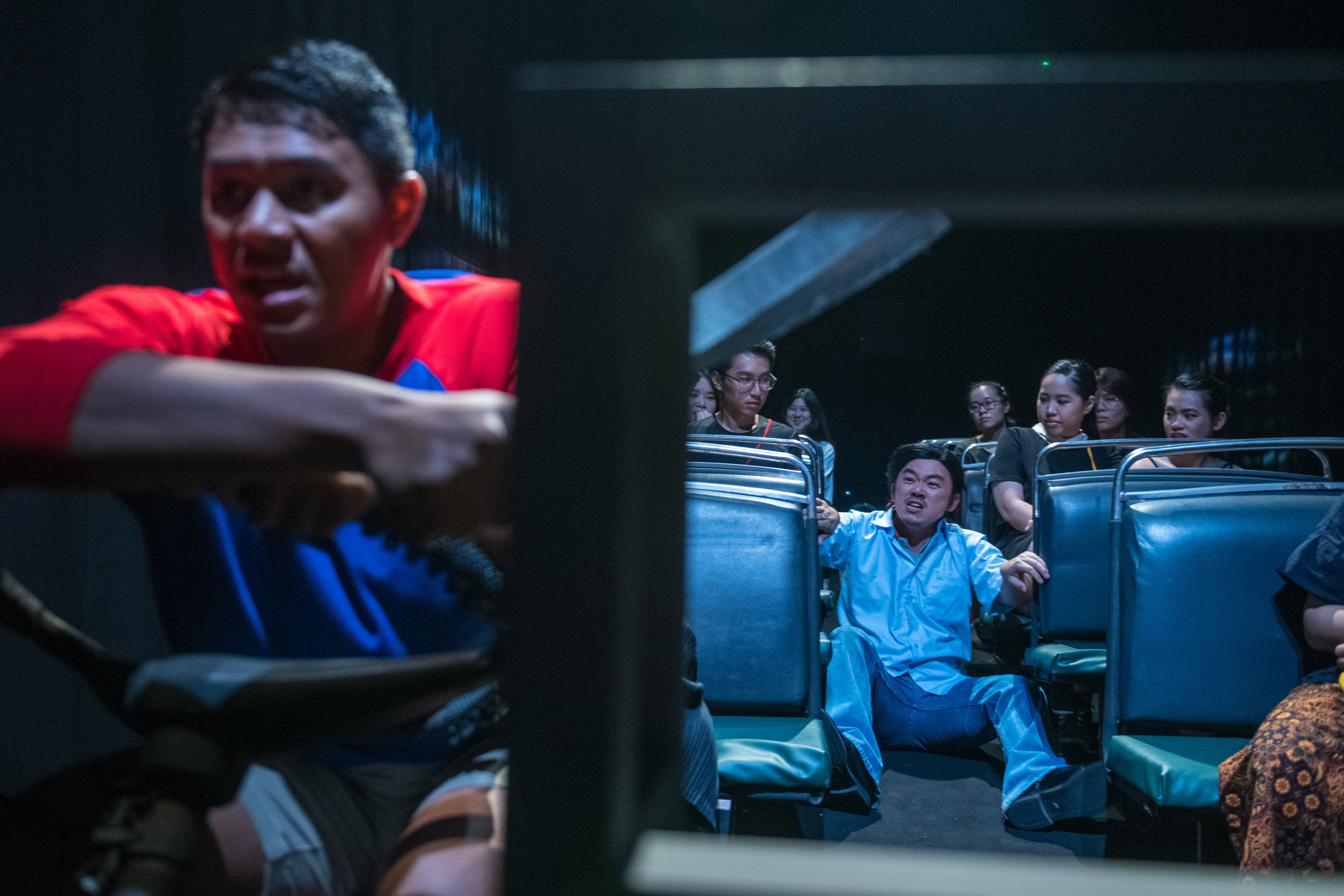 The act of walking from place to place enhanced the idea that we really were travelling through time. Each and every scene featured in Four Horse Road feels distinct, whether it’s the characters, the set-up, or the genre. In 1978, we board an old ‘SBS bus’, where we were sitting in actual bus seats, while blurry projections on the walls mimicked the view from a moving bus, making it feel as if we were actually being driven around. In this scene, Ruzaini Mazani and Yeo Lyle played believable characters that helped immerse us into the story. 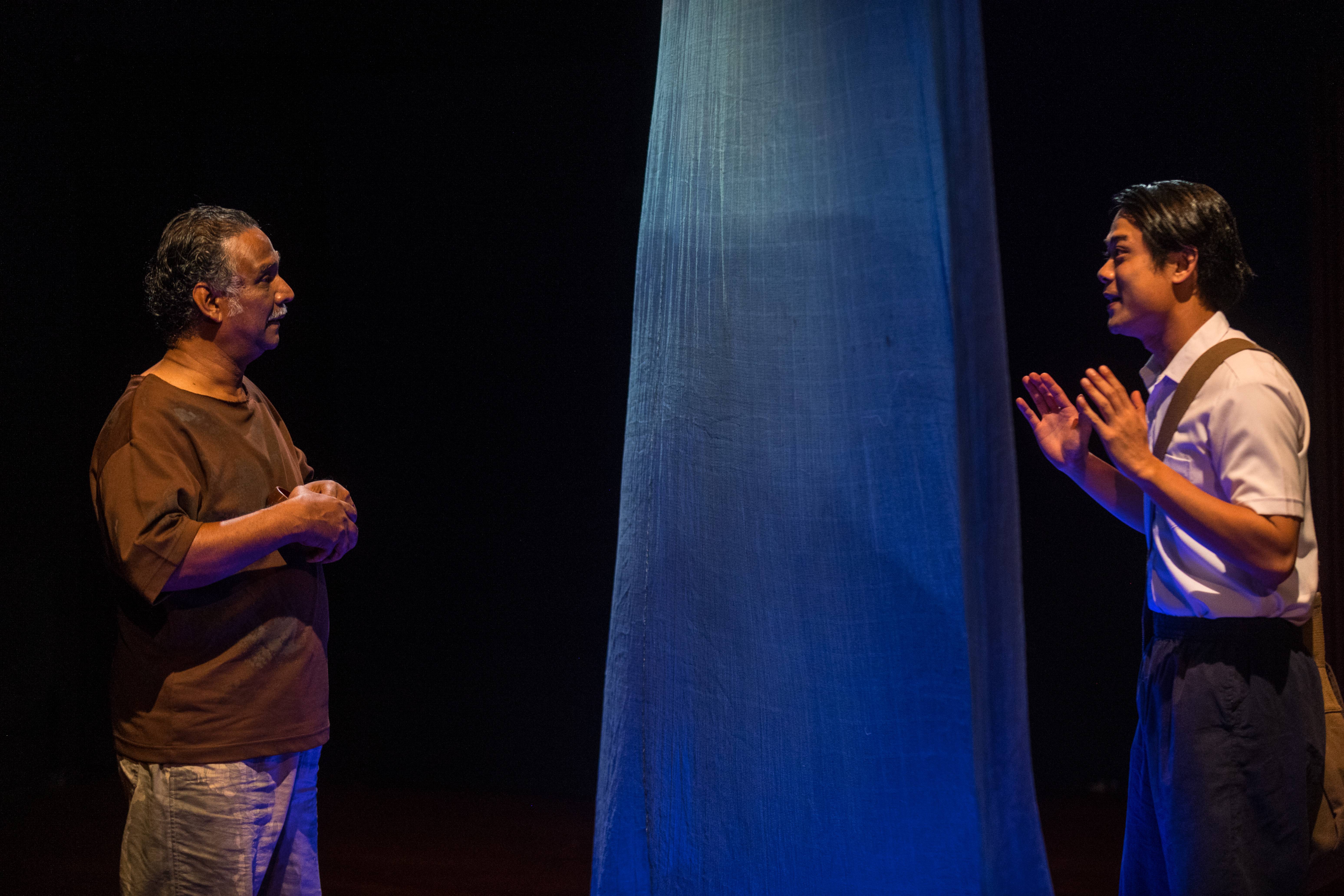 Even in the scenes with minimal set-up, smart design choices helped us imagine the environment they are set in. In 1870, a translucent sheet of cloth hanging between Vester Ng and Ahamed Ali Khan shows how close they are to each other, yet remain separated and existing in two different worlds. Despite their different ages, race and backgrounds, they manage to connect over their shared stories, an unlikely friendship that succeeds against the odds. 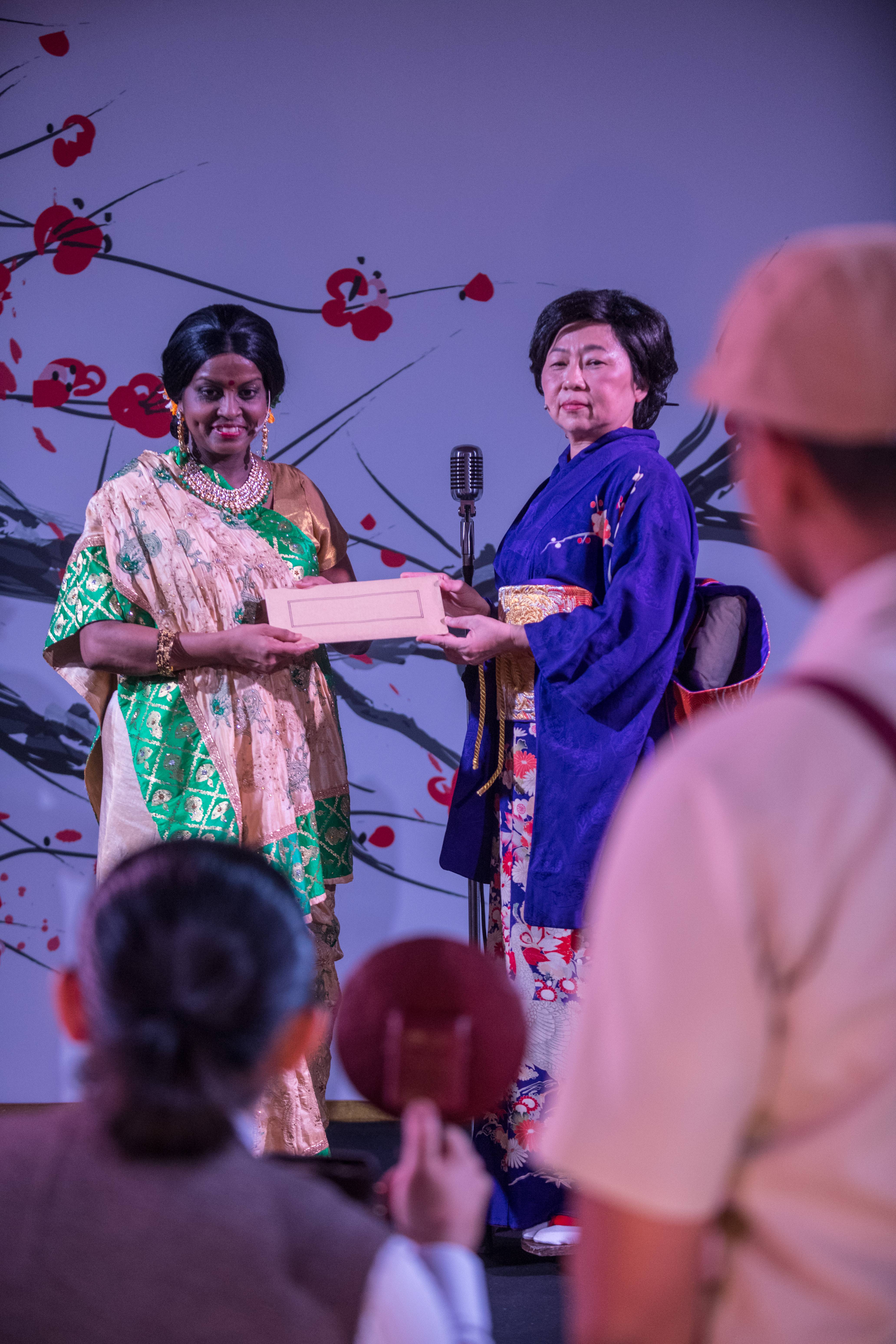 One of the best scenes that showcased how all of this comes together was in 1943 as we arrive at the May Blossom Restaurant. Table arrangements made us feel as if we were settling in for Chinese banquet, complete with a live singer, waiters, and a pot of Chinese tea on the table. Dressed in a beautiful purple kimono, elaborate obi and even geta (sandals), Goh Guat Kian commanded our attention as the lady Onishi-san and hostess of the event. Throughout the scene, the actors maintained a constant, uneasy tension in the air, with a barrage of surprises in quick succession that kept us on our toes. And despite packing so much into this scene, at no point did it feel messy. Director Jian Hong organizes the chaos, and every desperate cry or shocking revelation is keenly felt. 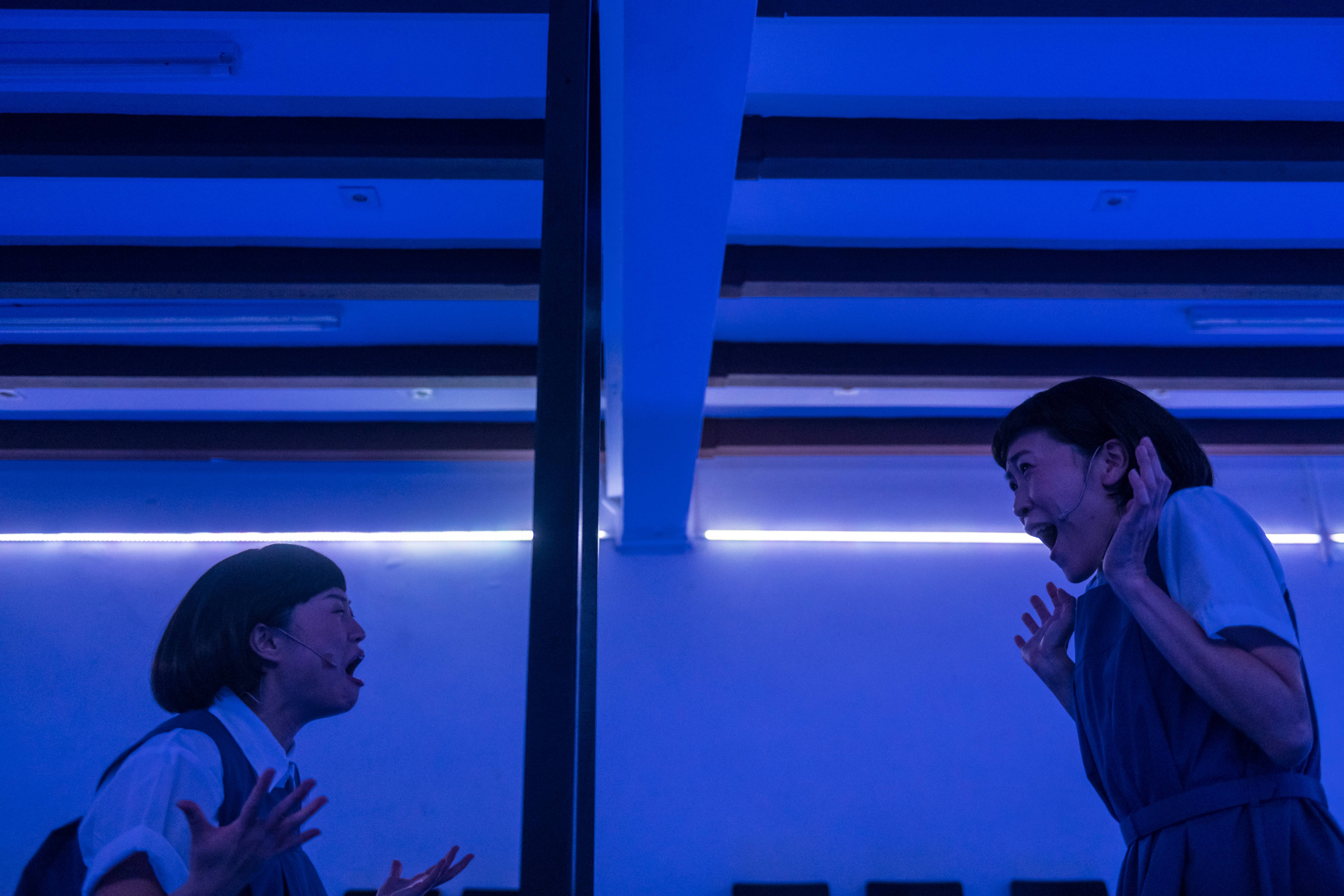 At the heart of Four Horse Road however, is its dedication to telling stories well. In each tightly-scripted scene, we get a satisfactory idea of almost every character featured, while still keeping us hungry to discover more. We were riveted as Ethel Yap and Jodi Chan displayed strong chemistry with each other as they played CHIJ students exchanging urban legends of supernatural beings haunting their school. With fear and excitement in their voices, we could imagine them exploring the school grounds after dark as they stepped through frames with distinctly Catholic arches, and we wanted to find out more about these supposed ghosts lurking around. 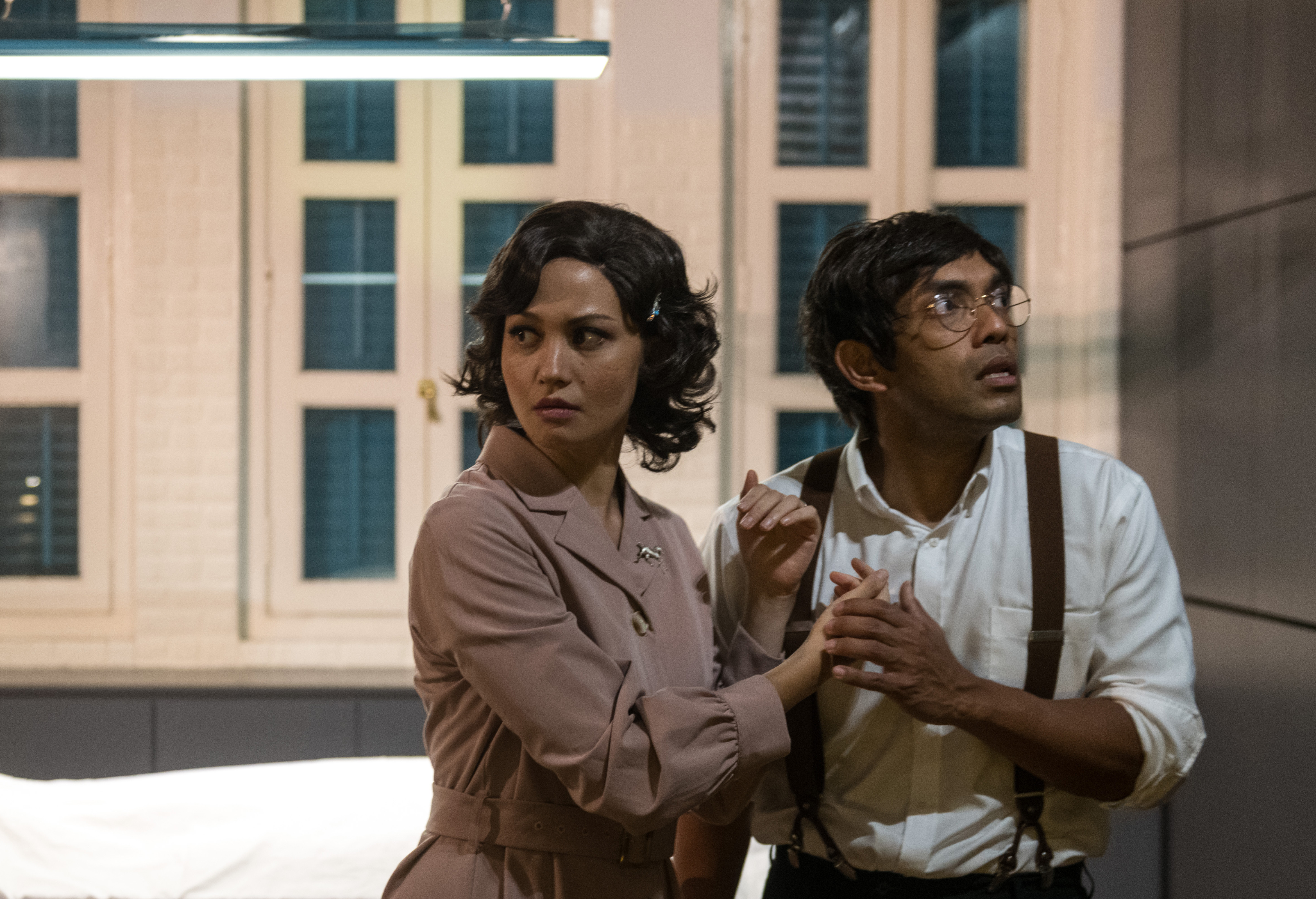 While all the scenes are based on reality, playwright Jonathan Lim also gives himself enough space to showcase his rich imagination. In 1948, we enter a morgue, featuring set-pieces that resemble mortuary cabinets. Investigating the death of a young syce formerly employed to Victor (Dwayne Lau) and Janet Mendoza (Liz Sgt Tan), Inspector Williamson (Andrew Mowatt) offers a riveting interrogation, making us feel as if we were part of a jury. Queer overtones arise as the couple let slip their secrets. 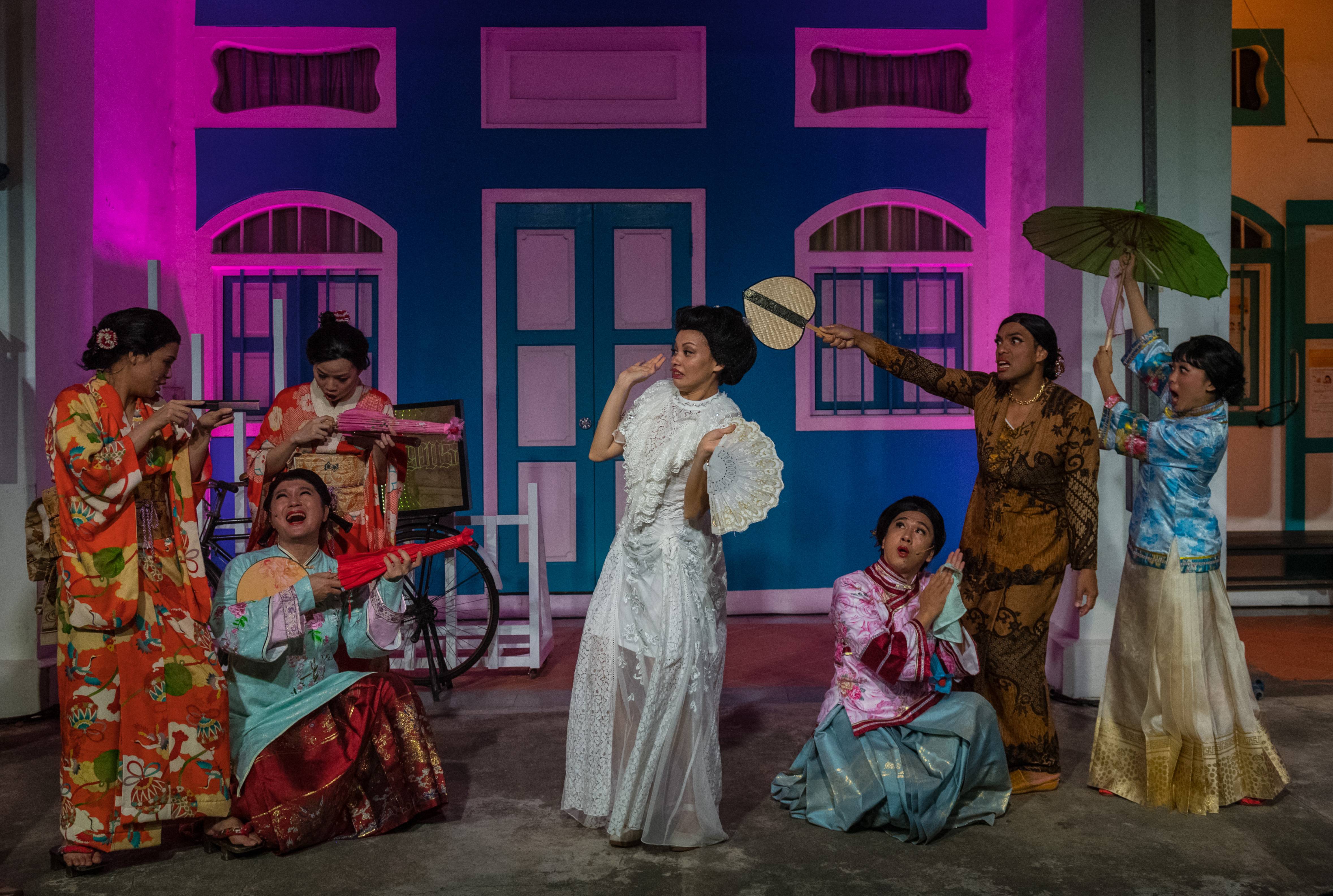 But above all, it is how Four Horse Road subtly but firmly reminds us of our unique, intercultural society that makes it work so well. What seem like clashing ideals and beliefs are constantly subverted when characters from vastly different backgrounds connect over a shared, fundamentally human understanding. The most obvious example of this is how in 1915, we watch a group of Japanese prostitutes, Chinese prostitutes, Russians, and an Indonesian mamasan come together to gossip and dramatize the Sepoy Mutiny of the afternoon, leading to plenty of campy, laugh out loud moments. It is our diversity that makes us strong in the face of crisis. 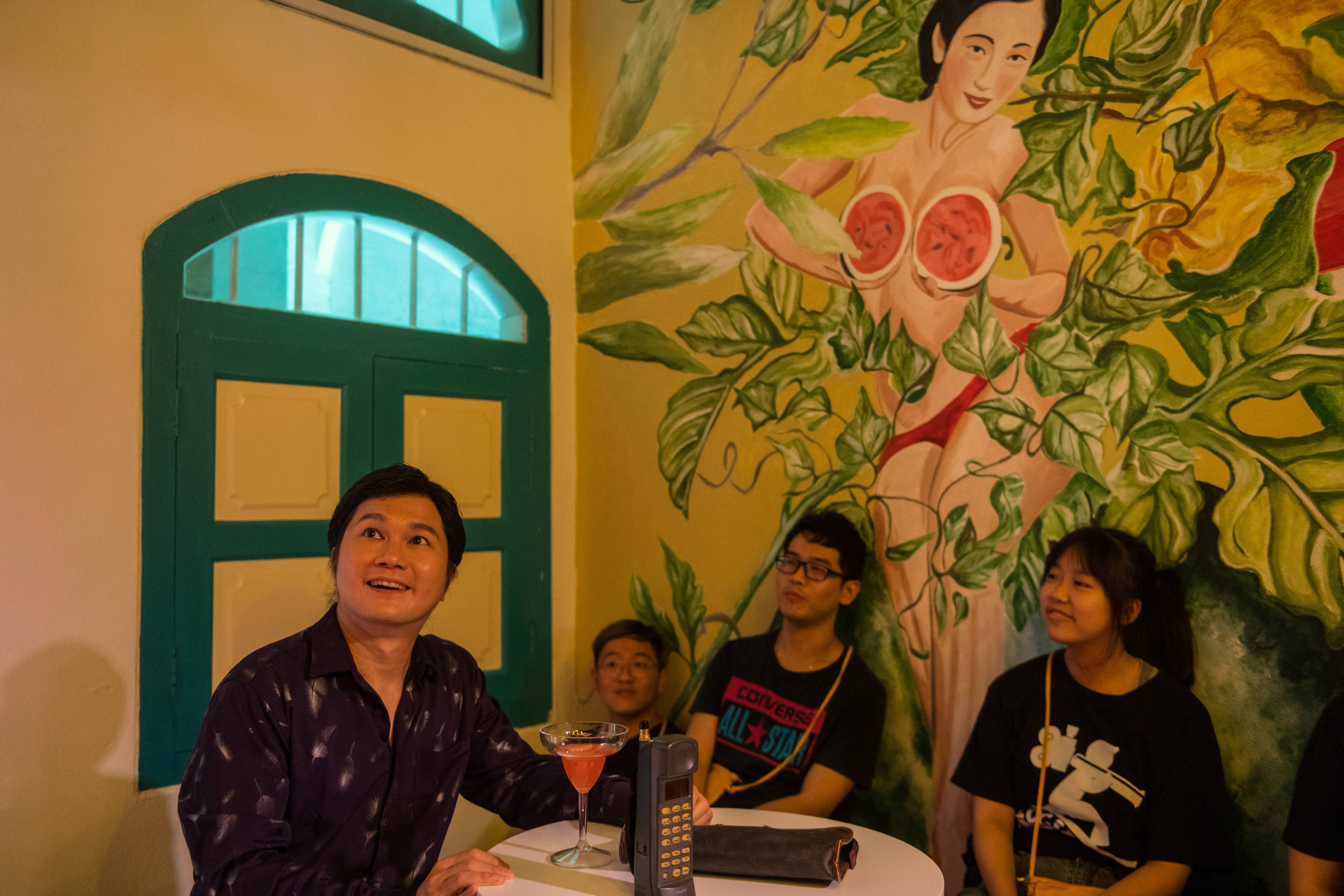 Arriving at the Watermelon Garden nightclub on the last day of its operations, dancer Chor Lian (Sharon Sum) puts on a brave front as she performed for us, all smiles in spite of not knowing what lay ahead for her. Joined by hotel security guard Robert (Sugie Phua), we are reminded of what we lose to progress, as they share their memories of the place, and we clapped along as Chor Lian sang the iconic ‘Cha Cham Bo’. The scene ended on a high note, and reminds us that there can and must be hope amidst uncertainty. 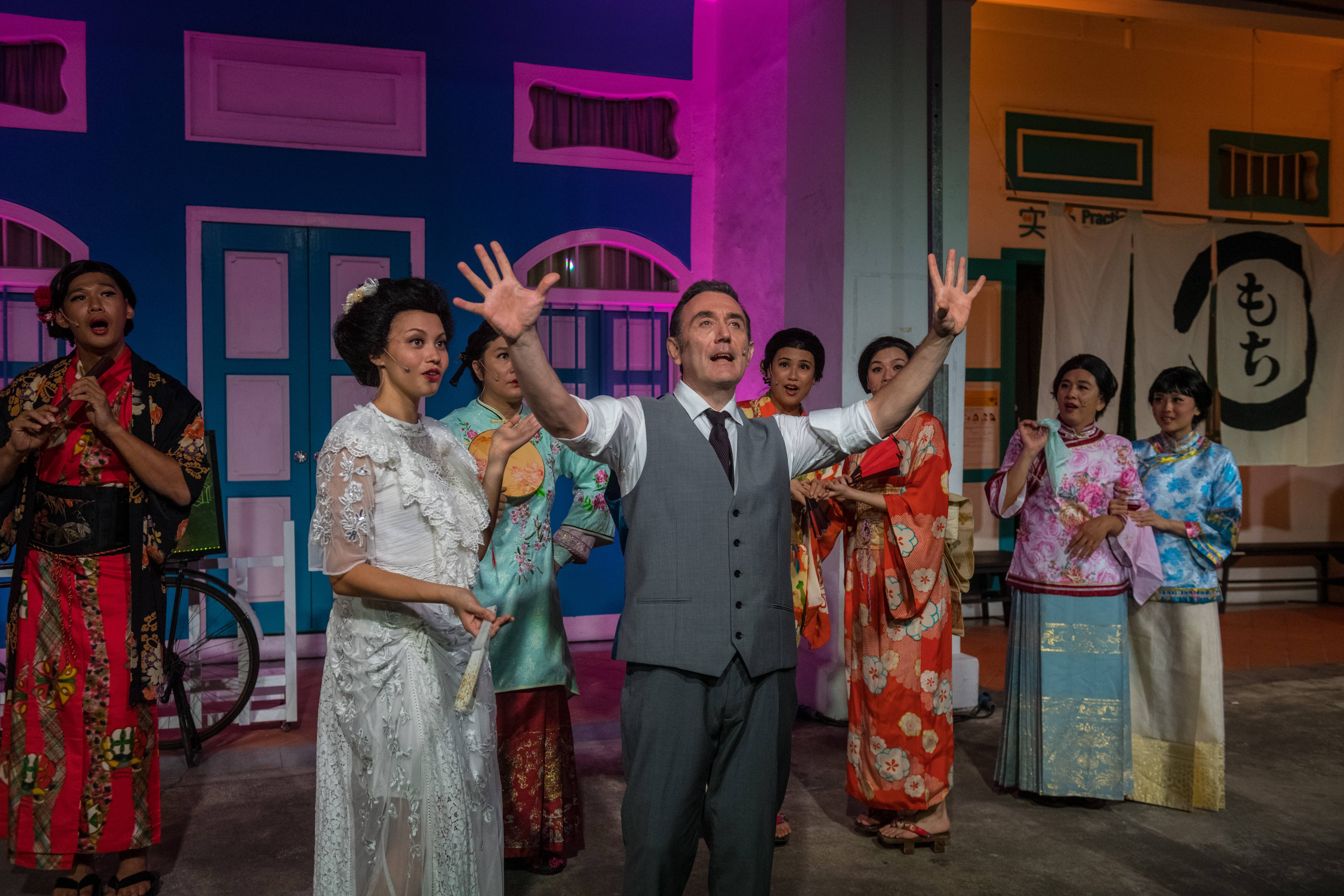 And it is precisely now, more than ever, that it seems we need hope. As the arts scene goes dark in light of the ongoing COVID-19 situation, Four Horse Road has ended its run after just two public performances. This is a production that must be experienced to be felt, and one we wish more people could have had the chance to attend before closing. Over these last few weeks, the team behind Four Horse Road has persevered and adapted to each change to the best of their abilities, pressing on despite knowing their shortened run. Even the programme booklet has been updated to reflect the current circumstances, and taking it home, it becomes proof that this was a production that was staged in 2020. 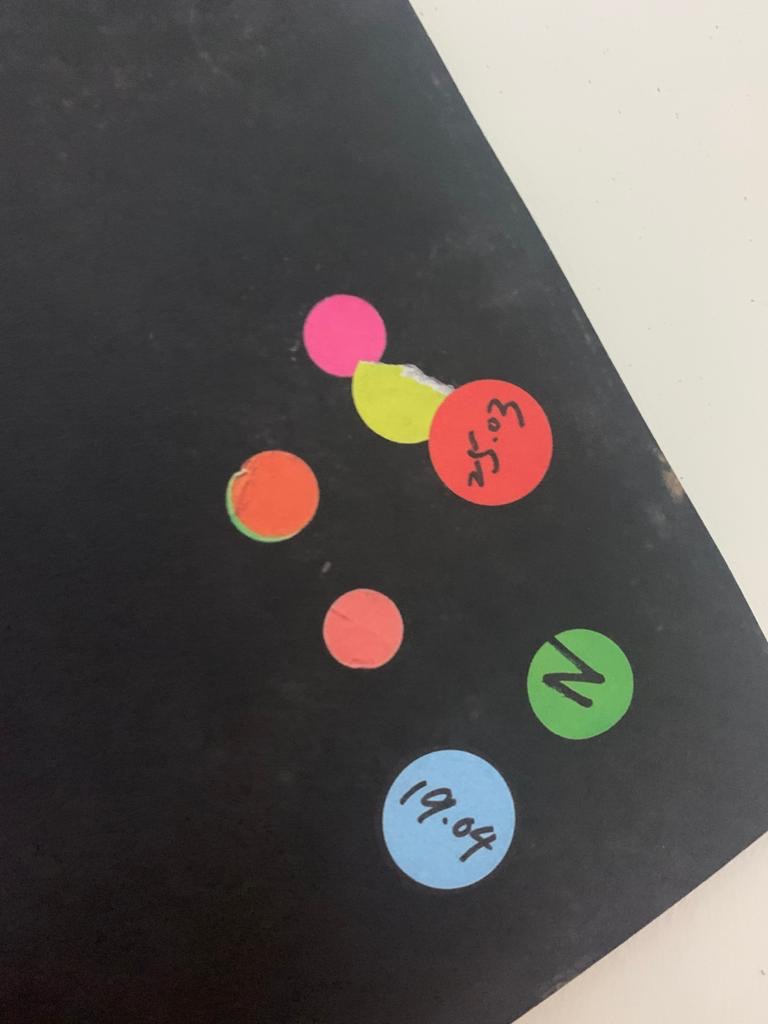 The result is an exceptional production that has defied the odds, capturing Singapore’s cultural diversity as told through the history of a single district, and bringing us on a wild journey through time. There is so much potential to be found in mining our Singapore stories, and with Four Horse Road, The Theatre Practice has done so much of it right. And that is why this is a show deserving of ★★★★★

P.S. you can support The Theatre Practice by visiting the Practice Tuckshop, where you can purchase a Four Horse Road souvenir mug at $10. 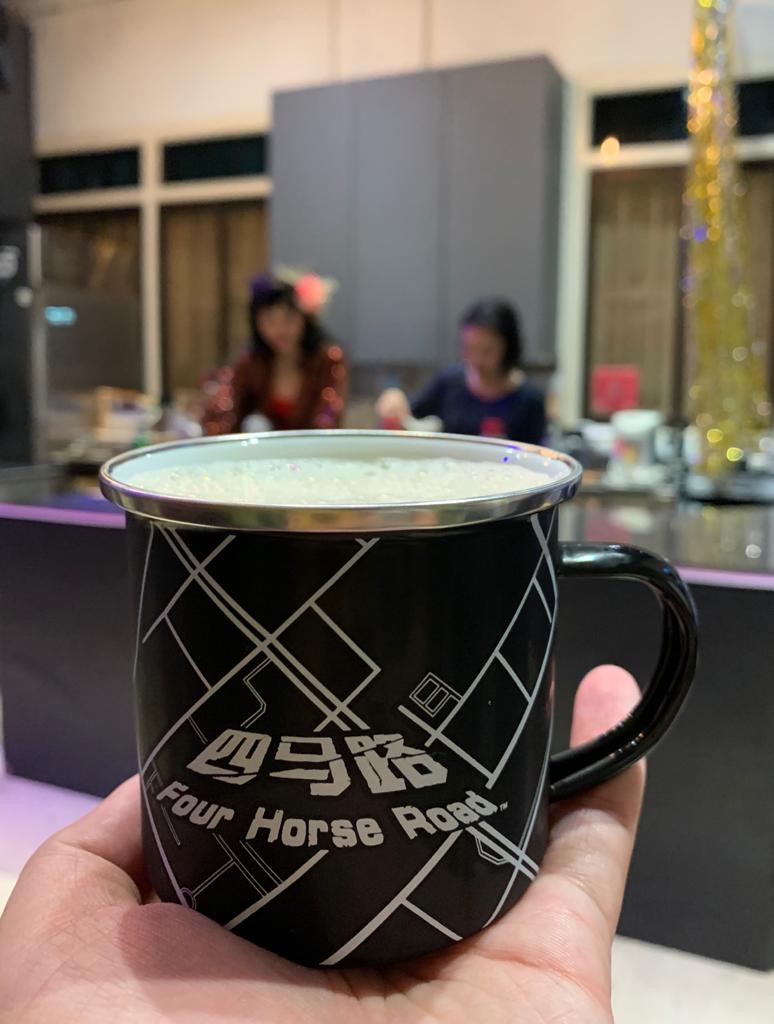