W!ld Rice’s annual Christmas pantomime opens in less than a week, and we couldn’t be more excited to catch it. Since its inception, W!ld Rice’s pantos have gone above and beyond simply being a show for children to enjoy with their families, to becoming all-encompassing theatrical extravaganzas filled with a whole barrel of laughs and plenty of love to go around. This year, they’ll be staging a brand new show – Mama White Snake, inspired by the Chinese legend of Madam White Snake, and will star W!ld Rice artistic directors and best friends Ivan Heng and Glen Goei onstage as the Green Snake and White Snake respectively.

Sitting down with Ivan and Glen, and director Pam Oei, we found out a little more about the show’s conception and what a journey it’s been working on it. The idea for Mama White Snake was originally born 5 years ago during a Chinese New Year function, after W!ld Rice Resident Playwright Alfian Sa’at saw Ivan and Glen dressed up as the Green and White Snakes (during the Year of the Snake, of course). Inspired, he was determined to see both of them onstage together in a play, and wrote Mama White Snake. Said Glen: “Ivan and I have known each other for 41 years. There’s really no better story than Madam White Snake to portray that friendship, where two sisters who are also best friends are always looking out for each other.”

Said Ivan: “Alfian has really taken this idea of these two snake sisters who were banished because they were not human and really reimagined it for today, for us to think about what it means to understand and embrace difference.” 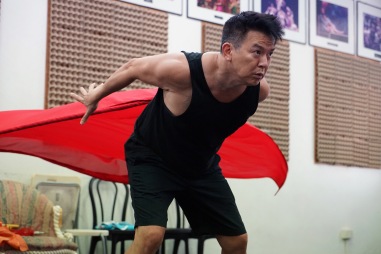 Better known for his directorial roles in film and theatre, Mama White Snakes will also mark the first time Glen Goei will be seen onstage in a public performance in 30 years. Said Glen: “I didn’t really have a choice! Alfian wrote the parts specifically for both of us, so it’s not exactly something I can turn down. Maybe if more writers write parts specifically for me, you’ll see me onstage more often in the coming years.”

The rehearsal process certainly hasn’t been easy. Even before the seven weeks of intensive rehearsals kicked in, the cast members underwent training in both Wushu and Chinese Opera for three months. This time around, fights were choreographed by stage actor Gordon Choy, while his father, a Chinese Opera veteran artiste, took charge of teaching the specific Chinese Opera techniques, such as the famed ‘water sleeves’. Said director Pam Oei: “When Ivan first suggested the idea to me, we already knew it was going to be a mammoth task. Especially so for the actors, since on top of the normal acting and dancing and singing, they also had to learn Chinese Opera and Wushu, and it’s really mentally and physically taxing.”

Pam herself is no stranger to the W!ld Rice family, having worked on projects with them since 2001. She’s headed multiple W!ld Rice productions in the past, from Hansel and Gretel to The Emperor’s New Clothes, and of course, Boeing Boeing earlier this year. It’s been a monumental task for her as well, multitasking on a whole new level. Said Pam: “There are so many things to do at the same time, from snake puppets, music, dance, acrobatics, costumes, hair, costumes again, and still fitting in time to do a cast recording. It’s just as tough on the actors as it is for me though. On my Facebook today, a post I made about The Emperor’s New Clothes came up and back then, I said it was the most complex thing I ever done. I take it all back.” 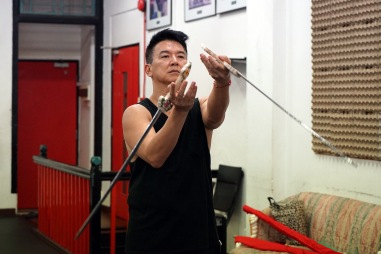 “It’s going to be very interesting for audiences to come watch the show – for the younger crowd, it’ll be a new sound and a new kind of language they’ll be experiencing, while for older audience members, they might feel a tinge of nostalgia from the old days of Chinese Opera before it died out,” she adds.

On what it’s like to work with the two head honchos of W!ld Rice, said Pam: “Glen and Ivan are my dear friends, and in fact, just the other day I realized there’s really nobody else who could do this. Our friendship is very stable, and ultimately, whether or not we have artistic disagreements during rehearsals, it stays within the rehearsal room, and our friendship never gets affected.”

Said Ivan: “Pam is really part of the W!ld Rice family. She’s proven herself with each new production and she’s grown so much. Mama White Snake is an original work, and under Pam, has become one of the most ripe, complex works we’ve done, helped of course by Alfian’s book and Elaine Chan’s music, both so beautifully written.”

W!ld Rice’s pantomimes also always feature a number of children, and Mama White Snake is no different, starring a whopping 22 kids from the First Stage programme playing large groups of characters throughout the show. Said Pam: “The kids really work very hard. They’ve woken up everyday at 6am, go to school, come here at 2pm, then work till 10pm and then they sleep, repeating the cycle the next day. But they’re very well-behaved kids, and I know they wouldn’t have it any other way.”

Pam adds: “We actually have this one kid Lucas. He’s only six years old and a National Wushu Gold Medallist. But the reason why he got into Wushu was that 3 years ago, he came to watch Monkey Goes West. During the Wushu sequences, he turned to his mother and asked ‘What’s that? I want to learn that.’ So his mum went to look at the programme, called up Martial House and signed him up for lessons. After the second lesson, the owner of the school decided to personally teach Lucas himself because of how talented he was, and now here he is coming full circle, performing on stage for the very first time in Mama White Snake.”

Added Ivan: “This is exactly the reason we’ve included children onstage, there’s just something very special about children watching other children performing onstage. It’s really empowering, and really does something for their imagination and confidence and makes them think ‘I can do that too!'”

Beyond the cute kids, catchy songs and stunning fight sequences though, Mama White Snake’s story promises to be a heartwarming one. Said Pam: “I think one of the most attractive things about the show is how Meng (played by Andrew Marko) has such an unusual family – he’s brought up by his mother and his aunt and in reality, there really are so many non-traditional families out there. I guess our biggest message is that it takes all kinds of families to make up this world, and as long as there’s love and the child is loved, nothing else matters and you don’t have to conform to what someone else prescribes.”

Said Ivan: “Over the years, we’ve felt so free to incorporate, borrow and reimagine stories because of our multicultural nation. Beyond Chinese culture in Monkey Goes West and Mama White Snake, we’ve tapped into the ‘kampung spirit’ in Oi! Sleeping Beauty! and even had a ‘fairy god-makcik’ in Cindrel-lah! There’s so much to mine from our rich traditions and cultural makeup with its wealth of stories, and it’s really a privilege to be doing this year in and year out.”

Besides Ivan and Glen, Mama White Snake will also be starring Andrew Marko, Cheryl Tan, Zelda Tatiana Ng and Siti Khalijah Zainal. We have no doubt that W!ld Rice will deliver on all the hype they’ve been building up so far for Mama White Snake. Opening this Friday (24th November), we’re more than ready to once again dive headfirst into the colourful, musical and unforgettable world of W!ld Rice’s annual pantomime, and celebrate the end of the theatre season in style with one of the biggest, most anticipated shows of the year.

Mama White Snake plays at the Drama Centre Theatre from 24th November to 16th December. Tickets available from SISTIC. 3 additional Sunday evening shows have been added on 26th November, 3rd December and 10th December at 7.30pm. On 10th December, the performance will be accompanied by interpreters, specially for hearing-impaired audience members.