The Studios 2018: An Interview with Siti Khalijah (How Did The Cat Get So Fat?)

First performed in 2006 to critical acclaim, Zizi Azah’s monodrama How Did The Cat Get So Fat? makes a return this April as part of the Esplanade’s 2018 season of The Studios.

In this version, the play will be helmed by The Finger Players Artistic Director Tan Beng Tian, who has injected the performance with her signature blend of puppetry. Siti Khalijah Zainal will once again be starring as Fatimah, a nine year old girl from a single parent family who encounters a magical lion while on a kiddie ride. Naming him Mr Minismen, she goes on to meet various people making up Singapore society, from a maid to a taxi driver to even a social media influencer, and critically examine the national pledge’s relevance and influence in today’s society.

How Did The Cat Get So Fat? is also one of the plays responsible for catapulting actress Siti K into the public eye and earning her a Life! Theatre Award for Best Actress. Returning once more to perform this monologue, we spoke to Siti about the new elements we can expect from this updated 2018 version, and how she’s approaching the play with brand new eyes ten years on. Read the interview in full below: 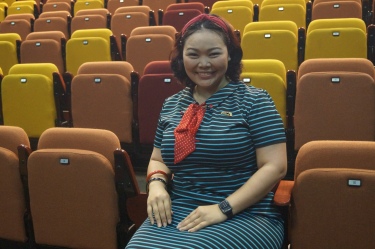 Bakchormeeboy: How has How Did The Cat Get So Fat? been updated for the times since the previous time you performed it was around 10 years ago?

Siti: Zizi has added an additional scene and updated the script slightly to keep it current, but a main bulk of the script will remain as per the original staging because the issues are surprisingly still very relatable and relevant.

Publicity materials for How Did The Cat Get So Fat (2006), presented as part of Teater Ekamatra’s Mentah

Bakchormeeboy: How Did The Cat Get So Fat? was one of the first plays to nab you a nomination for the Life! Theatre Awards. Since then, you’ve grown to become one of Singapore’s most celebrated actresses. How has your experiences since then changed the way you view and perform the piece this time?

Siti:I was only 21 years old when we did the very first staging of How Did The Cat Get So Fat? back in 2006 and it has opened many doors for me as an actor. I’ve definitely grown since then, and I feel like I could get into the characters with much ease now, having gained more life experiences and being able to observe and witness more of my social surroundings through all the years.

Bakchormeeboy: For this restaging, you’re working with puppet master Tan Beng Tian from The Finger Players. How did you find the process of adding on puppetry to an already challenging monologue?

Siti: It’s such an honour to be working with Beng Tian whom I highly respect. It’s definitely challenging to be performing the play in a completely different style, where I’m juggling between having to switch from one character to another, and having to handle all the puppets on my own. What makes it even tougher is that we’re not performing it with traditional puppets, but we’re using Object Puppetry that have been further deconstructed. Having to give life and emotions to those objects and also having to think of the main character’s journey is something that I need to practice more. But I’m willing to take up the challenge because I know I’m in the safe hands of Beng Tian and Daniel (Assistant Director), who have been very patient with me.

Bakchormeeboy: Why should audiences come and watch How Did The Cat Get So Fat?

Siti: You will be able to relate to most of the characters in How Did The Cat Get So Fat? They’re your everyday Singaporeans that you’ve probably encountered before but may have never interacted with. You will get to hear them voice out their concerns, struggles and how they learn to cope living in this country. And all these, being told through the eyes of the innocent and curious 10-year-old Fatimah.

How Did The Cat Get So Fat? plays at the Esplanade Theatre Studio from 19th – 22nd April. Tickets available from the Esplanade