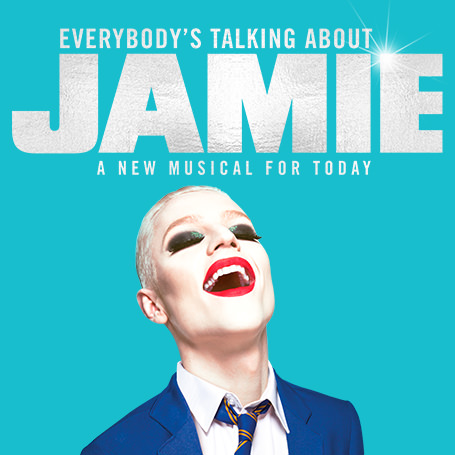 LONDON – Some of the greatest high school dramas originate from America, but Sheffield Theatres’ original musical Everybody’s Talking About Jamie makes a strong case for joining those ranks. Inspired by BBC documentary Jamie: Drag Queen at 16, director Jonathan Butterell brings the story of a teenager who dreams of becoming a drag queen to life with all the verve of a Pride parade and the delicacy of the most powerful of dramas.

With book and lyrics written by Tom Macrae and music by Dan Gillespie Sells, Everybody’s Talking About Jamie follows 16-year old Jamie New (John McCrea) as he becomes determined to wear a dress to school prom. Being in conservative Sheffield though, might just prove to be a bit of a challenge, as he fights off societal prejudice and school bullies, while finding himself along the way. Thankfully, he’s got a whole lot of support from family and friends behind him, resulting in what is one of the very best, feel good musicals for this generation. 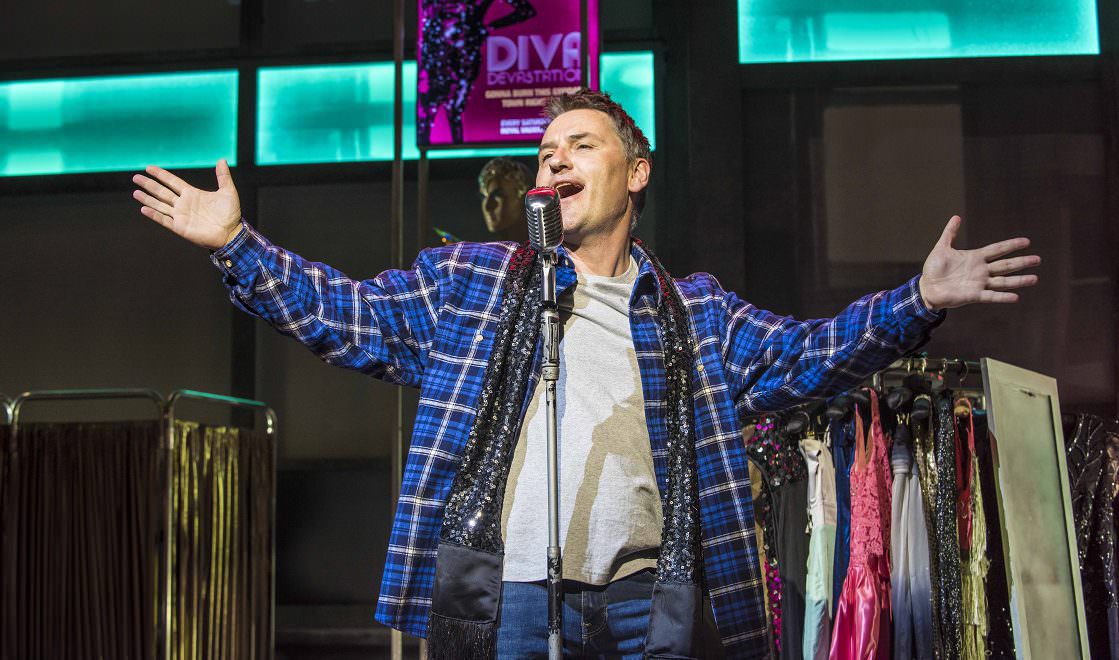 Anna Fleischele’s set design and Lucy Carter’s neon lighting is magnificent from the musical’s opening number, as audiences are treated to a bright, multifaceted set hiding plenty of secrets. A number of clever technical tricks are also utilised to make every song feel transcendent. Every scene and setpiece is met with smooth transitions and transformations – school desks double as a lighted platforms that when combined, form a glitzy catwalk, while screens behind display punchy, in your face videos while Kate Prince’s energetic choreography makes every number worthy of a music video, comparable to the likes of Lady Gaga’s career highs. 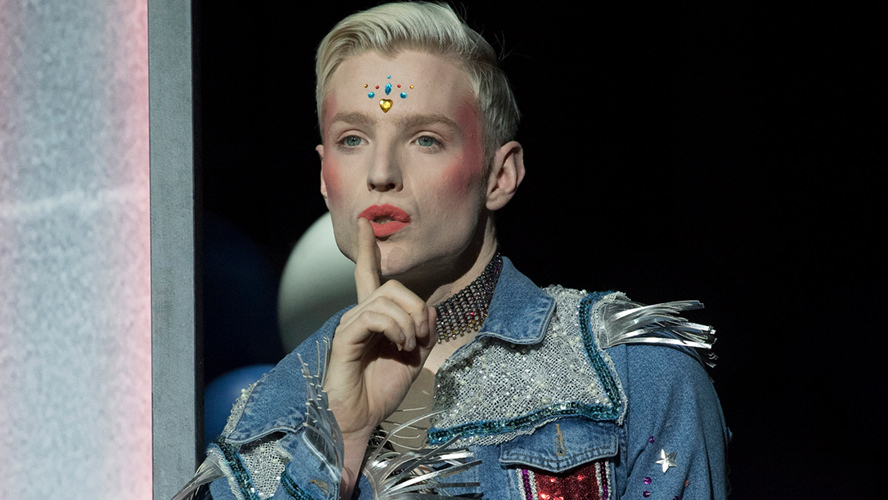 John McCrea, as Jamie, is stunning from start to end, bringing a youthful energy to the stage that allows his character to shine. So rarely is the ‘femme’ stereotype embraced in media, and McCrea owns his character with such a ferocity, so sure of his identity that one cannot help but root for him throughout. Amidst his infectious confidence and witty comebacks, McCrea brings out Jamie’s vulnerability and uncertainty when needed most, an unparalleled joy when he receives a pair of red heels for his birthday, and impressing with his ability to perform in heels. 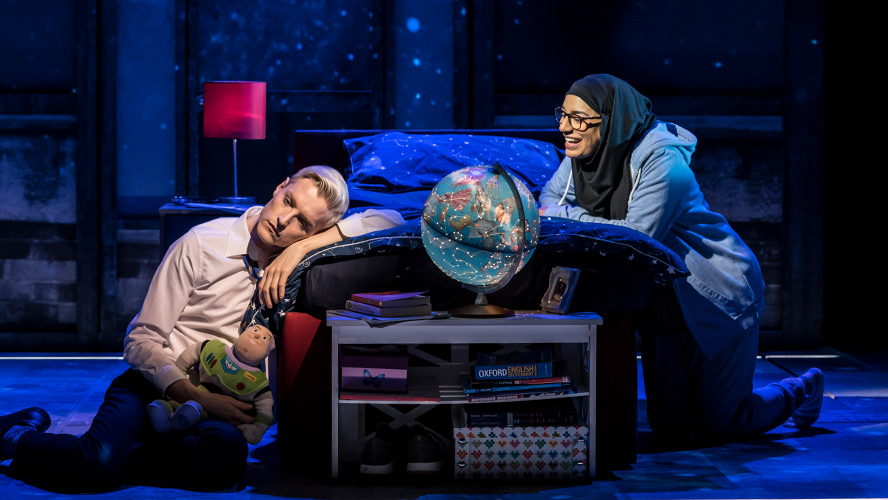 As much as everybody is talking about Jamie, the show is nothing without its incredible ensemble. Lucie Shorthouse is an unconventional and formidable best friend and faghag to Jamie as hijab-donning classmate Pritti. Proving the Muslim stereotype wrong, Pritti shows herself to be one of the most forward-thinking characters across the show, supportive and occasionally revealing some serious spunk as she’s always there by Jamie’s side. Not only is Shorthouse a promising young actress, she has the vocal prowess to match as well, her crisp, clear voice soaring in numbers like ‘Spotlight’ that makes her one to watch and wish there were more roles for formidable actresses like her in musical theatre. 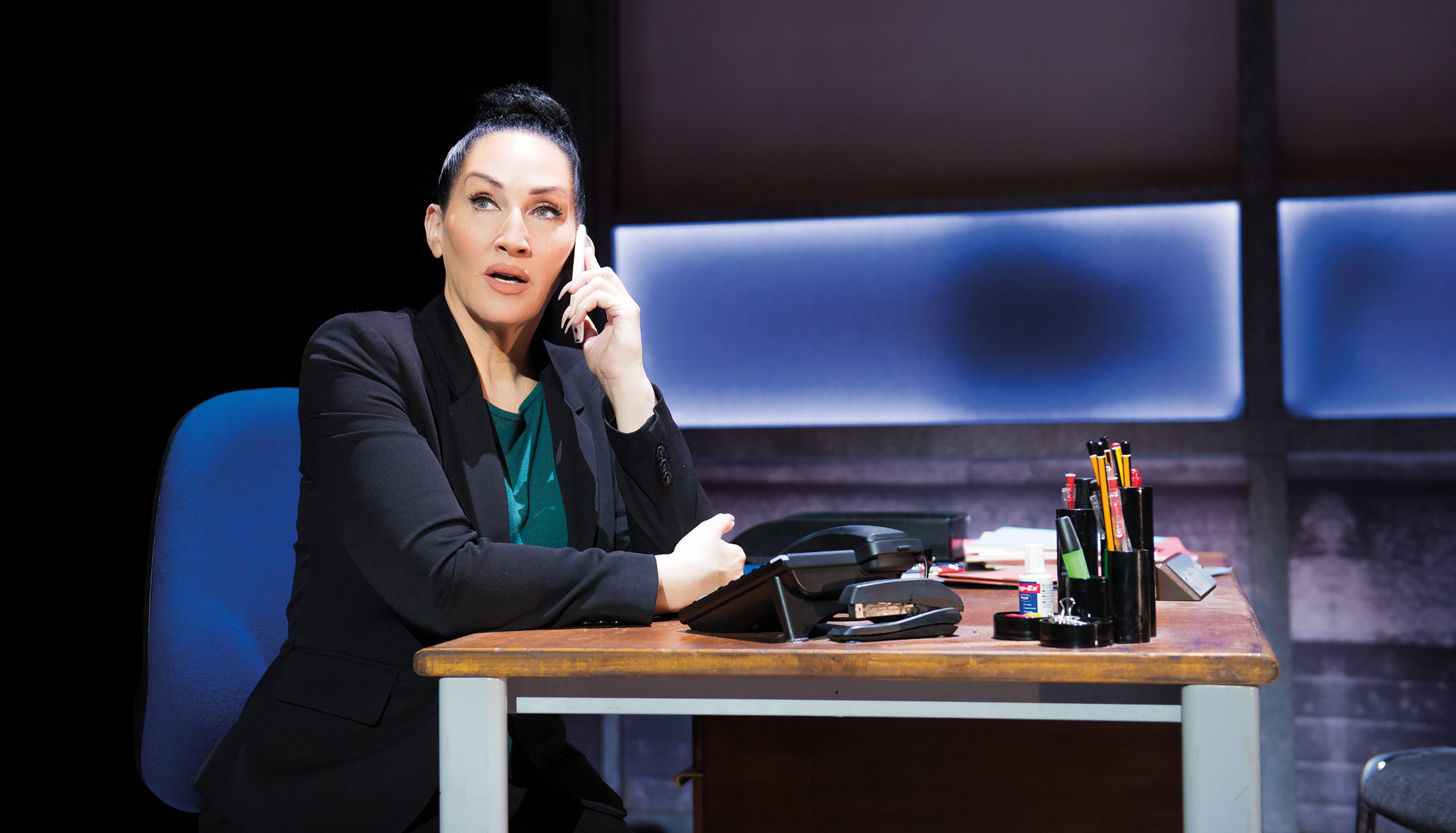 The English drag scene even made an appearance, with Alex Anstey (Vileda Moppe) and Daniel Jacob (Vinegar Strokes) as drag queens within the story, and joined by James Gillan, form a trio of fabulous drag seniors to Jamie before his first public appearance in drag, making for a triumphant moment of representation. Alongside Lee Ross as Hugo, all four queens instil Jamie with the confidence he requires to truly step up and take his dreams to the next level, even helping Jamie find his drag name and the perfect dress. So much of Everybody’s Talking About Jamie is so powerful precisely because of this recognition of how times have changed, and how the previous generation has that strength to instil in the next, encouraging and pushing them to live proud and strong and showing that the future is bright. Of course, star power in the form of Michelle Visage doesn’t disappoint either, bringing the energy up as strict schoolteacher Miss Hedge, and impressing both vocally and physically in numbers like “Work of Art”. 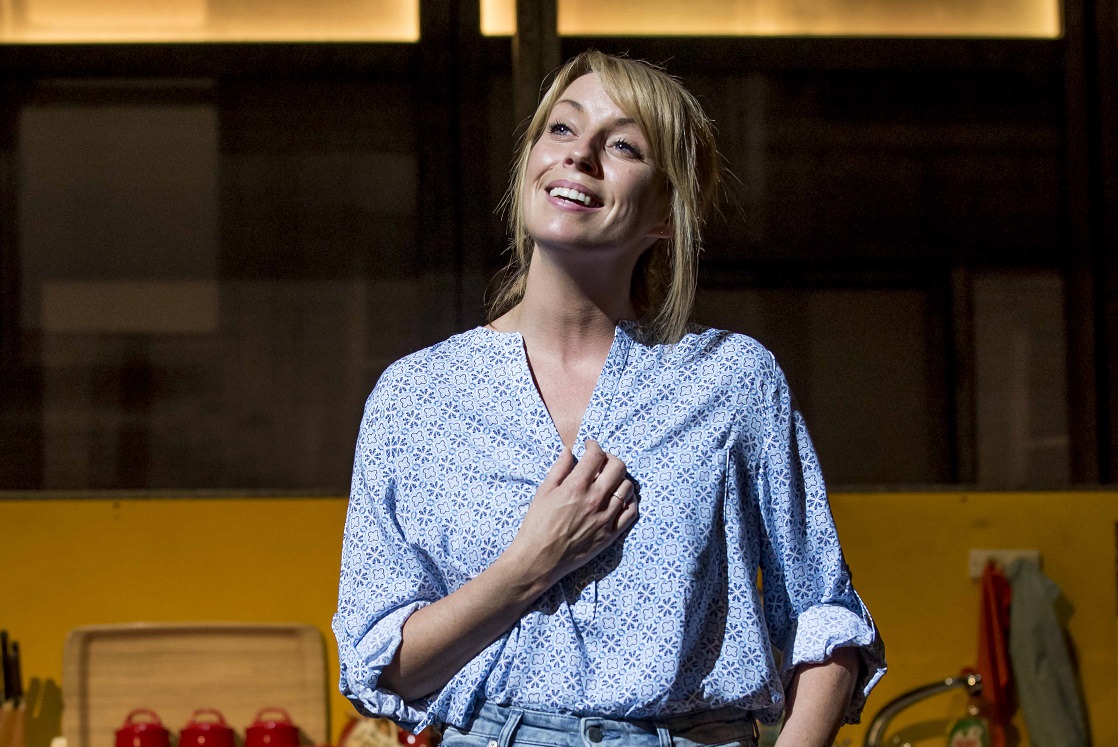 As Jamie’s mum Margaret, Rebecca McKinnis embodies the role perfectly, showing a tenderness and tiredness to her character that makes a rare, supportive mother to remember. As much as she doesn’t understand her son at times, to see a parent so wonderfully involved and invested in their child’s life is enough to give us hope that parents may finally break the stereotype of forcing their own children back into the closet out of ‘love’. McKinnis shines in solo numbers such as “If I Met Myself Again” and “He’s My Boy”, aching with emotion as she recalls her own difficult marriage (with a fantastic pair of dancers providing the visuals) and swelling with joy as she fills Jamie with confidence respectively. 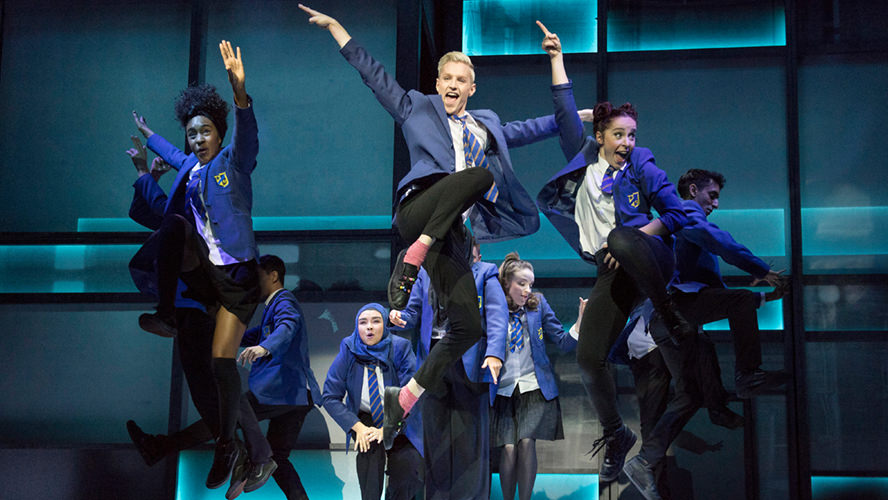 Fiercely original, Everybody’s Talking About Jamie buzzes with a vibrancy that makes it feels completely alive and celebratory every step of the way, making audiences crave every scene. Jamie is groundbreaking precisely because it both recognizes the continued struggles of growing up queer in a conservative society, but unlike most queer storylines, confidently strides into the future with the promise of a happy ending, allowing its ostensibly queer main character to live out, proud and strong. As the ensemble stands together for the final curtain call, each receiving their own spotlight to highlight their importance, one cannot help but feel sheer joy emanate from what is certainly the feel good musical of this year and beyond, knowing that perhaps, as we stand together and support those who need it most, we too can finally come out of the darkness and into the light, boldly snapping, vogueing and strutting into a brighter future.

Everybody’s Talking About Jamie plays at the Apollo Theatre, London. For tickets and more information, visit their website here.