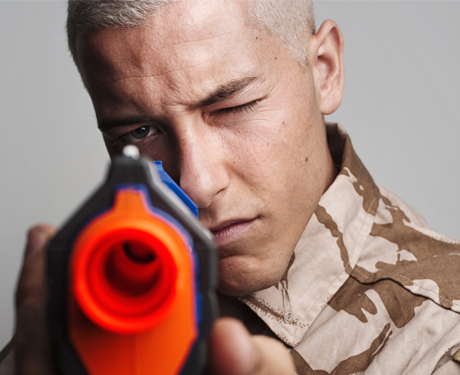 Intense, frank look at PTSD in this urban drama about soldiers.

LONDON –  War is a disaster that few of us, thankfully, have ever had to experience in our lives. But for those of us who have, it can be one of the most traumatic things that affect you for life, with countless stories of PTSD war vets suffer long after it’s over.

With Warheads, writers Taz Skylar and Ross Berkeley Simpson take a long, hard look at PTSD in youth war vets. Directed by Toby Clarke, Warheads follows 19 year old Miles (writer Skylar) as he returns from his first tour of Afghanistan, along with best friend Mory (Hassan Najib). Things just aren’t the same for him anymore as he begins to get flashbacks of the war, hearing noises that aren’t there and no longer enjoying life the way he used to.

From the moment we enter the space, it already feels like we’re entering a bunker, complete with posters of games and films relating to war, from Call of Duty to Stanley Kubrick’s Full Metal Jacket, giving us insight into what we’re about to get ourselves into. Throughout the play, we move back and forth as we catch glimpses of Miles’ time in Afghanistan, and life back in London as he struggles to maintain a sense of normalcy again. Flashing back, we see Miles and Mory making the rash decision to head to Afghanistan on their own accord, without telling anyone, not even Miles’ girlfriend Tena (Klariza Clayton), a decision that changes both their lives forever.

Director Toby Clarke manages to seamlessly move the play from scene to scene, and coupled with the script, allows Warheads to be laced with an undeniable, urgent sense of pain and tragedy, as Miles struggles with his condition. As audience members, we cannot help but root for him to somehow ‘get better’ as we watch him suffer and relive the traumatic memories over and over.

Taz Skylar’s performance is tender and sincere, hitting especially hard in a flashback to Afghanistan. Here, while speaking to his psychologist (Sophie Couch), he recalls meeting an Afghan child who always high-fives him each time they meet. When his captain (Craig Fairbrass) informs him that the child has passed, it’s a giant blow to his psyche, as the reality of death and war hits him full on.

As dark as Warheads gets, it is thankfully, occasionally punctuated by Tena’s best friend Tembe (Joseph Connolly), an out and proud gay man who constantly pokes and prods at Tena’s mates, asking difficult questions in a less serious manner that helps break the tension. Connolly is a particular standout in this role, and a welcome presence onstage each time he enters. Selfless and always there for his mates Tena and Miles, he is the glue that keeps them together, and a constant source of support.

As for Tena, who knew Miles even before Afghanistan (via Mory), Klariza Clayton delivers a powerful performance as the ever-present girlfriend, standing by her man and seeing him change both before and after his tour. But even with her unerring care and unconditional love, Miles continually returns to his darkness, as his PTSD grows increasingly unstable. Despite her best efforts to help, Tena herself becomes a victim of this as Miles almost strangles her during an incident, with almost no control over his body anymore. It’s an invisible condition to everyone else but him, made evident when we see angry red light shining down on him while he hears the sound of bullets continuously being fired, paralleling the fireworks in the sky as people wish each other a happy new year.

We end Warheads on a tragic, traumatic note, and the one character who seems strongest and most steadfast is the one who falls first. With that, we’re reminded to pay more attention to those closest to us who may very well be suffering from some kind of difficulty that we simply cannot see. Trauma is a problem that must continue to be addressed if change is to be expected, and Warheads does this subtly and evocatively, leaving us moved and wanting to help in any small way we can.

Warheads runs till 7th September 2019 at the Park Theatre, London. For tickets, visit their website here