On their own, ‘fag’ and ‘hag’ are pretty derogatory words. But as Singapore’s biggest faghag puts it, two negatives make a positive, and Pam Oei celebrates the term in all its glory in her aptly titled cabaret show of the same name.

Faghag opens in song as Pam confidently strides out in a scintillating, sequinned black and red dress and glittery heels, accompanied by Julian Wong on a Liberace-esque white baby grand as she clearly defines and explains the curious phenomenon of women who love men who love men with her cheeky lyrics and bold, brassy arrangement. From the very beginning, there is no doubt that Pam is an out and proud faghag, and ready to bring audiences on an introspective (yet incredibly entertaining) journey into her own life as she explores just what are the the implications and responsibilities of a faghag. 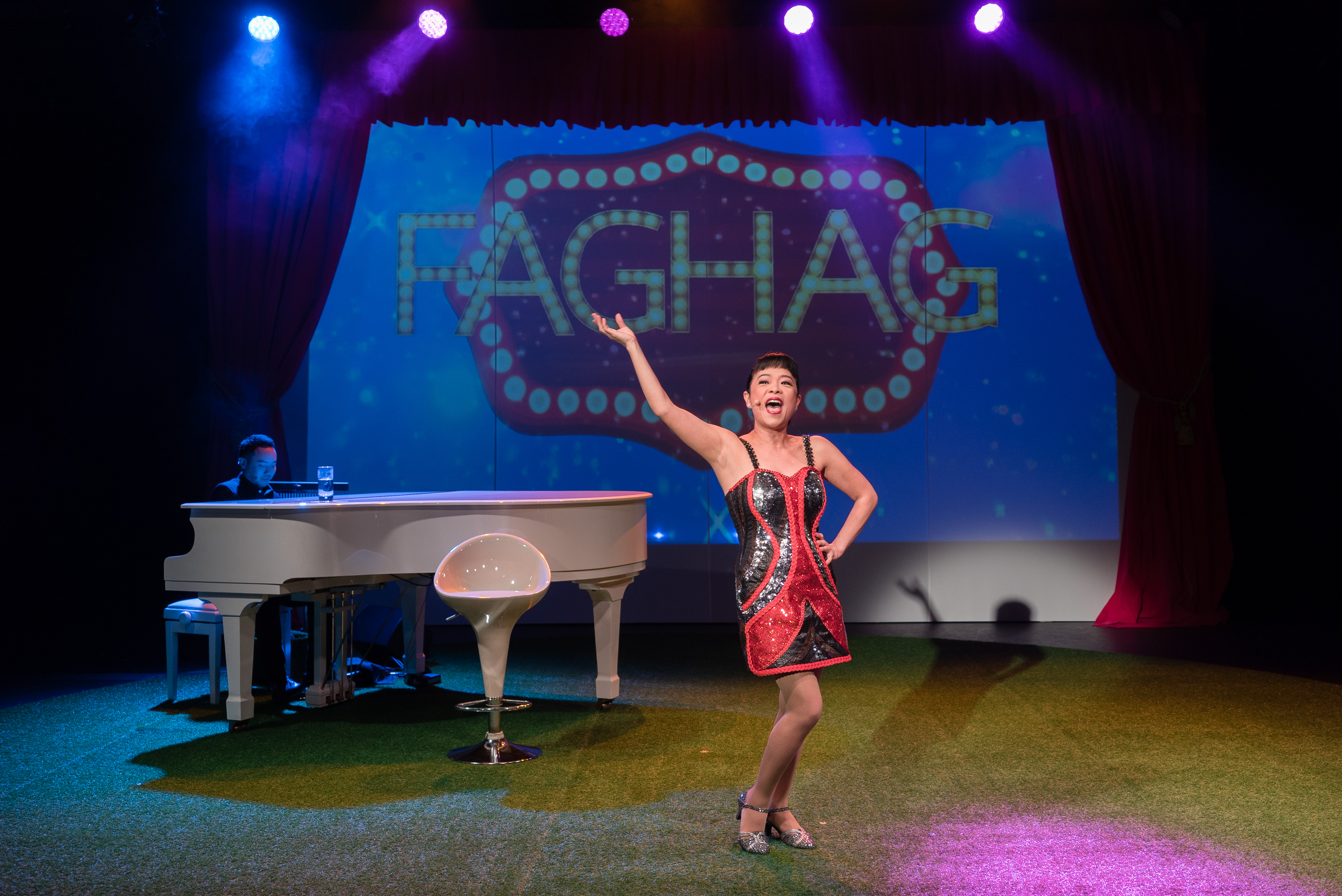 From attempting to find traces of faghag-ism in her parents’ lives to her childhood obsession with (very gay) Theatreworks founder Lim Siauw Chong to reliving her first stage show at the Drama Centre with Kumar (also very gay), Pam balances personal history with wildly entertaining showmanship in this lesson on being a good ally. Perhaps most pertinent of all is when Pam admits that when she finds out people are gay, she does not look at them with disgust, only disappointment (for her crushes), but wholly accepting of them for who they are, and eventually becoming their best friend anyway. 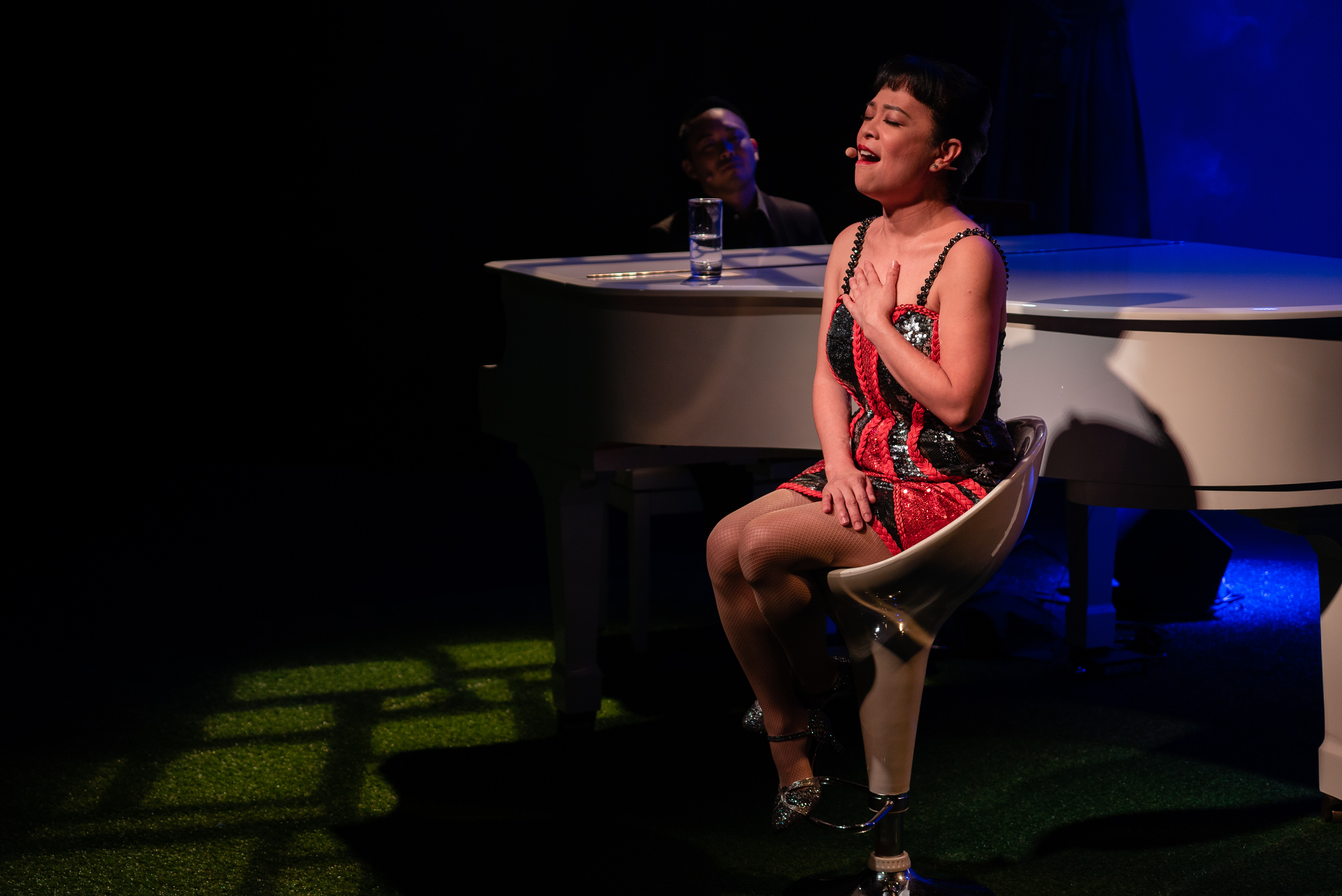 Faghag is a riot of a show, and Pam is completely in her element as she plays to her strengths in each and every scene. Faghag features a repertoire and wide range of well selected songs from pop and musical history, from Lady Gaga’s gay anthem Born this Way to Great Big World’s sobering Say Something when she recalls a friend lost to drug abuse, and Pam performs each and every one of them to aplomb, every hilarious lyric easily caught and each note on point (early on, she even tweaks Raffles Institution’s school anthem to poke fun at those pesky junior college hormones). Pam is a seasoned comedian, and her jokes come alive with pitch perfect comic timing, keenly observed and highly relatable. Faghag gives rise to gems such as an entire sequence dedicated to reflecting on stereotypical gay professions, and logical reasoning why it is theatre as a space of escapism and fantasy where the gays end up flocking to, where no other job could possibly see its employees going ‘Hello, darling’ each and every night. Meanwhile, she similarly excels at her character work, whether playing a Filipino nurse or a conservative ‘Yestergay’ conversion therapist full of Freudian slips. Faghag is a roller-coaster ride of laughs, songs and non-stop energy from an accomplished performer, ensuring there is never a dull moment throughout. 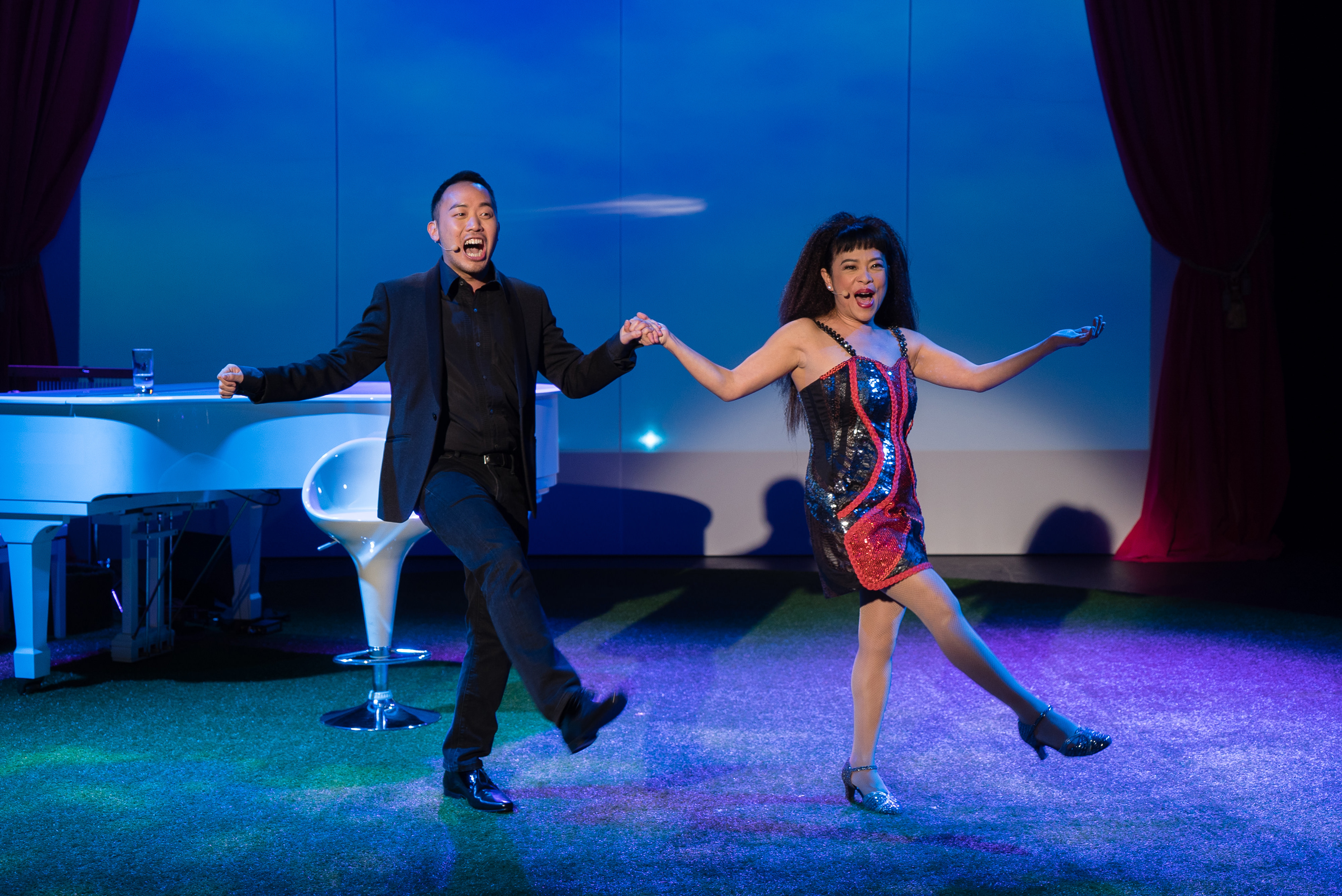 Pam melds her winsome, infectiously likeable personality with an ease to her performance that makes the entire theatre feel like a safe space, comfortable even when she chooses to turn the houselights on and encourage audiences that this is a “PDA zone”, and to openly love who they want. This sense of safety and warmth is such a rare and valuable commodity that often only the cover of darkness can afford, and for Pam to provide that so openly in this show results in a real triumph and emotional resonance when she recounts the story of how Julian Wong himself placed his trust in her when he came out to her years ago. A faghag is not only there in the good times – she is there to protect and comfort and love in the toughest of times. 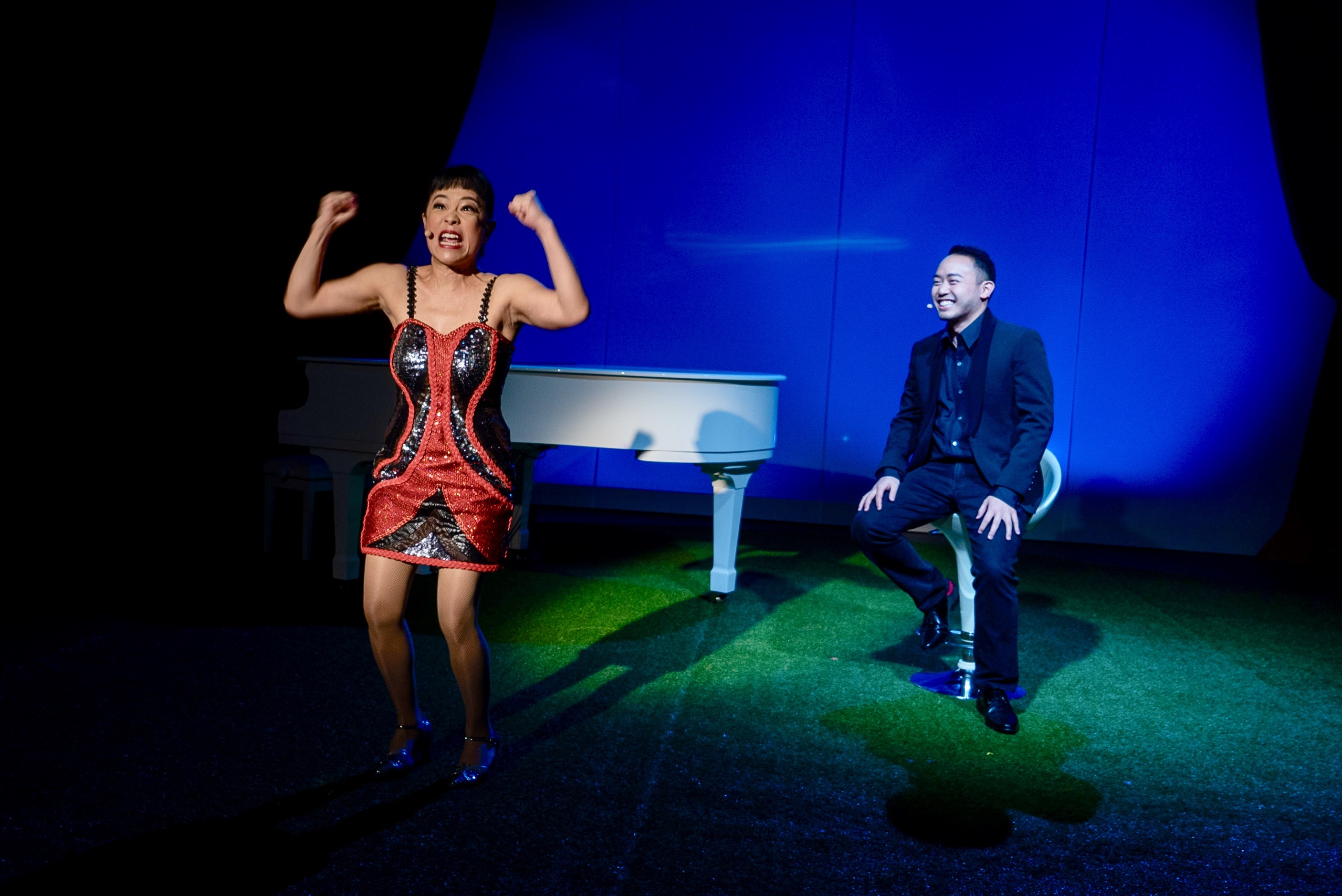 Charting Pam’s own history parallels Singapore’s own queer history, as she recalls the now defunct Nation parties of the early 2000s, the opening of Singapore’s first gay bar, the petition to repeal 377A she, Alan Seah and Ivan Heng hand-delivered to the PMO and of course, her constant presence at every Pink Dot as countdown queen since it began in 2009. Watching the montage of Pink Dot formations as it grew as a movement ten years later (with multimedia designer He Shuming quick enough to even include the new Pink Dot 2018 segment from the day before), one cannot help but feel a twinge of pride and shed a tear at how massive it is today. 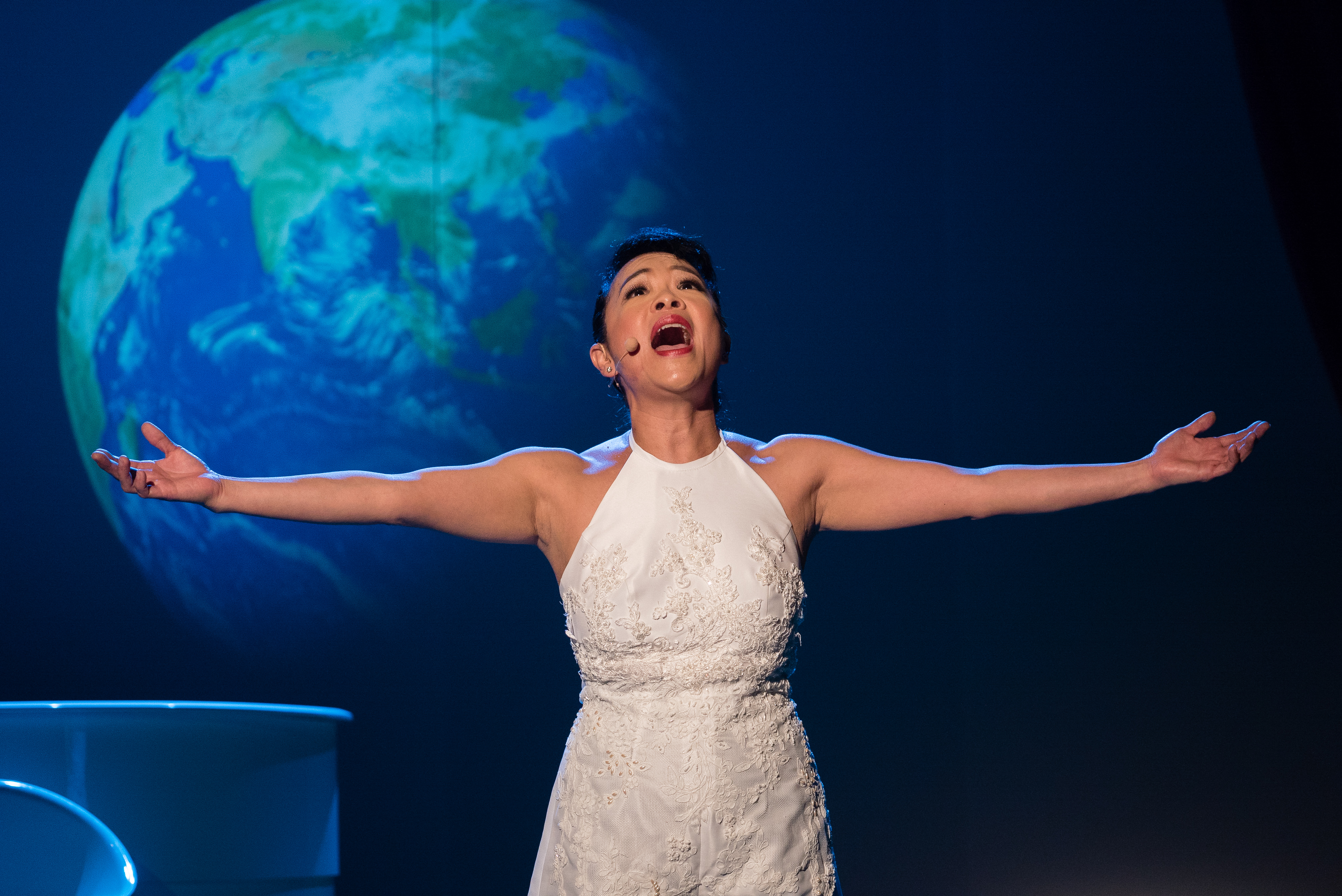 While Faghag appears predominantly light-hearted and fun, Pam ends the show on a wistful, sombre note as she advocates how the fight for equality is far from over, artistically done as she strips down to a white dress and bares her soul with a wish. While our heart aches for the long way Singapore still has to go, knowing that people like Pam are in abundance and still fighting the good fight every day of their lives leaves us with hope for a better age (and certainly, the best is yet to be). This alone elevates Faghag far beyond its cabaret style to become a politically-charged, musical monologue about what it means to be a straight ally. A polished performance brimming with real emotion, Faghag is the fine origin story of a modern superhero, and all it takes to recognize Pam as Singapore’s reigning faghag in our eyes.

Faghag played at the Flexible Performance Space at Lasalle College of the Arts from 19th – 22nd July,